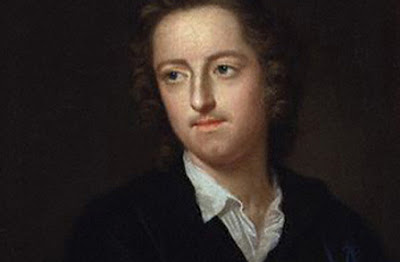 Thomas Gray, who spent most of his adult life in , , visited his mother and aunt at their home in the Buckinghamshire of , and may well have been inspired to write his “Elegy Written in a Country Churchyard” in the vicinity of the parish in this village.  It is, however, possible that his reflections were inspired by various scenes in the neighbourhood, such as the “ivy-mantled tower” of St Laurence’s Church in nearby , and there is one theory that it was actually inspired by an altogether different location, at Everdon, in Northamptonshire.  Whatever the fact, Gray is buried near his mother in , and a large and inelegant memorial to him stands nearby, with lines from the Elegy engraved thereon.


The poem, one of only thirteen that Gray saw published in his lifetime, is one of the best-known and best-loved in the English language.  In the mid-18th century this poem was the torch song for a group of writers who shelter under the collective title of “Graveyard Poets,” due to their melancholic verses, often set in graveyards, which reflect on mortality.  He most probably wrote the first draft (Stanzas Wrote in a Country Churchyard) in August 1742, as evidenced in a letter he wrote to his friend, Horace Walpole: “I have been here at Stoke a few days (where I shall continue good part of the summer); and having put an end to a thing, whose beginnings you have seen long ago. I immediately send it you. You will, I hope, look upon it in light of a thing with an end to it; a merit that most of my writing have wanted, and are like to want, but which this epistle I am determined shall not want.”


Stoke Poges, on the edge of Slough and uncomfortably close to the busy A & E department of hospital, has lost a little of the charm Gray may have detected there in the 1740s. It is only about an hour’s walk, however, down and , to the hamlet of Hedgerley, where certain aspects of rural life and vernacular architecture have been bypassed by the A335 and the M40 of progress, whose drowsy rumblings now “lull the distant folds.” 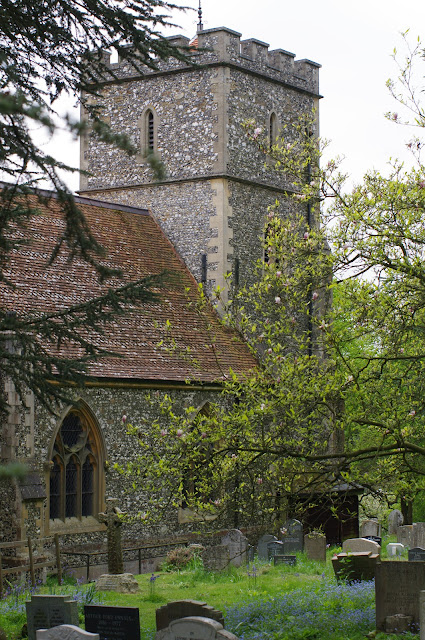 We are on the edge of Farnham Common and Burnham Beeches here, but it is less frequented and the lanes are still so narrow a coach and eight would struggle to get through.  In Gray’s time, before the enclosure acts (with Gray’s friend Walpole’s connivance), parcelled up the commons and hedged in the woods and fields, it would have been a wonderful wander, and indeed would have taken him “far from the madding crowd’s ignoble strife,” though now of course it is hard to find “rugged elms,” a “straw-built shed,” harvests yielding to sickles, or jocund ploughmen driving their teams afield! 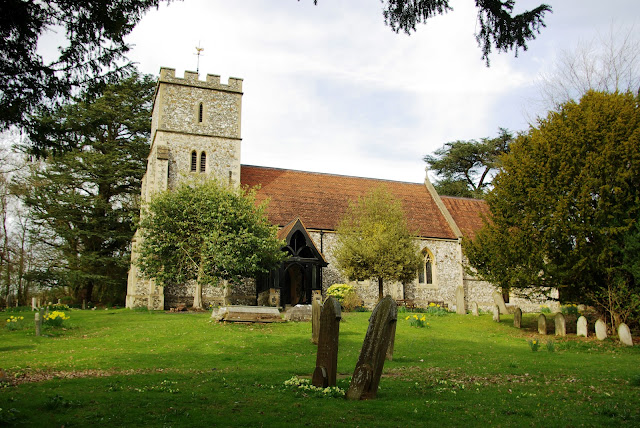 But there is a corner, or two in fact, of Hedgerley that is forever .  Though the current was built in 1852, there have been churches on this site since 1237, and it was only(!) poor soil and springs that put paid to the last one.  And as the current edifice is constructed of local flint, stone, wood and tile, it breathes an air that belies its comparative youth. 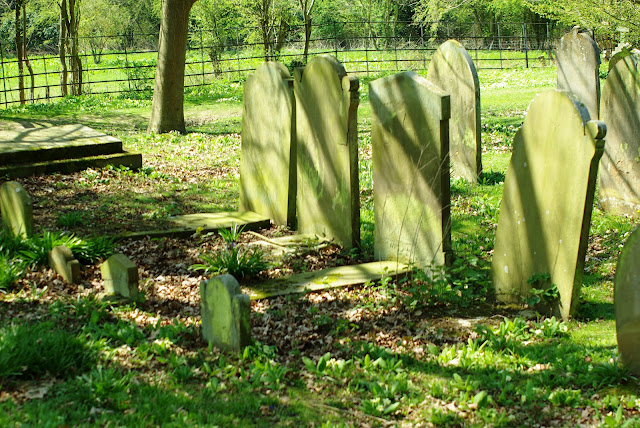 Anyway, in the yew tree’s shade there is “many a mouldering heap,” where the forefathers of the hamlet sleep.  They will not all have been farm labourers, for since Gray we have gone through both the industrial and the technological revolution, and we have developed both the BMW and the Lexus, to name but a pair of exemplar vehicles from a random sample of those parked outside the timber frame dwellings around.  So not quite so many are roused from their lowly beds by the cock’s shrill clarion to break the stubborn glebe with their furrow. 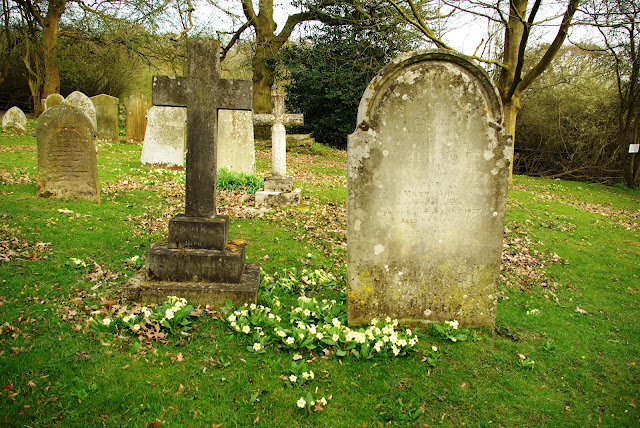 As Gray says, however, “the paths of glory lead but to the grave.”  Ambitions, heraldry, pomp and wealth, lie in this neglected spot just as surely as the, “short and simple annals of the poor,” fade in the destiny obscure, though in this cool sequestered vale of life we hold the memories of those we loved, “in lonely contemplation.”


And so it is I wander among the frail memorials, and through into yon wood, or Church Wood as it is known.  Here there is a Reserve belonging to the Royal Society for the Protection of Birds, which, with the help of local charities and volunteers, endeavours to manage the woodland with as little intervention as possible, so that decaying wood, for example, contributes to the biodiversity, although non-native species, such as sycamore, are controlled.  Beech, oak and ash trees predominate, but there are also wild cherries, hazels, holly and the occasional rowan.  The paths, which are kept clear of vegetation, allow you to admire the bluebells, and the primroses, which abound in their seasons.  Outside the reserve there are meadows filled with buttercups, but also hedges of hawthorn, and grazing fields
. 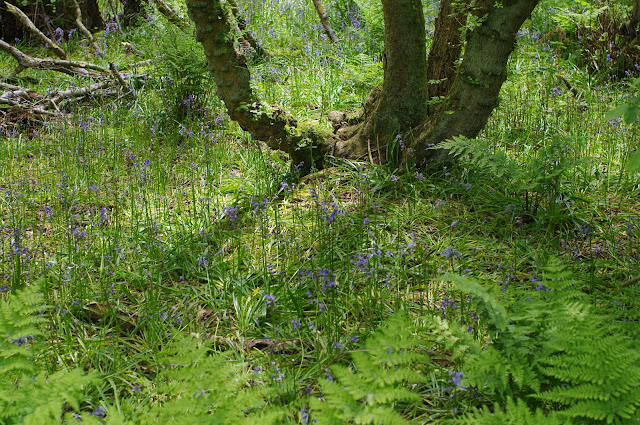 Within the wood the RSPB has provided nest boxes for a variety of species of birds, and in Spring you can hear the chitter chatter of great, blue and coal tits, chaffinches and greenfinches and the tuneful songs of robins, blackcaps, blackbirds and thrushes.  You may also hear great spotted woodpeckers and, if really patient, in summer you might see a treecreeper scampering up, or a nuthatch climbing down and round the trunk of a larger tree.  You are sure to hear, from time to time, the harsh cry of the jay, and probably the football rattle of the jackdaw, and high above it all you may hear the mewing of buzzards. 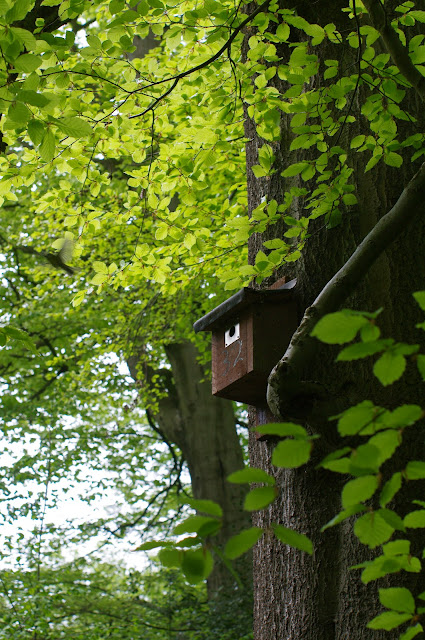 As a natural and virtually unspoiled woodland there is a wealth of wildflowers too, apart from the bluebells and primroses already mentioned.  Wood sorrel and anemones, lesser celandine, honeysuckle and violets cluster in the undergrowth; speedwell, forget-me-nots and bugles creep into the graveyard, where perhaps they were planted long ago; and hemlock, sweet cicely and greater stitchwort mix with the scarlet pimpernel by the wayside. 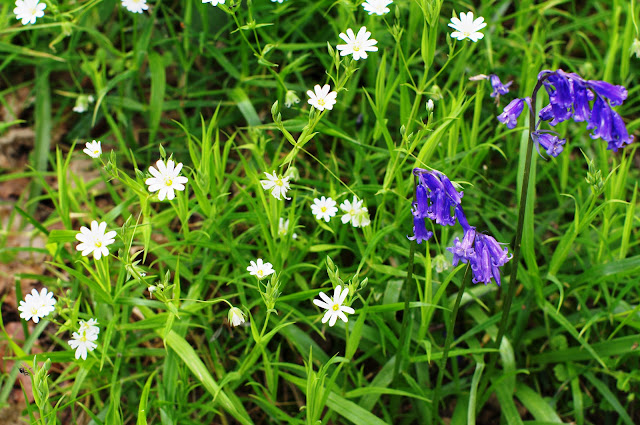 Between the wood and the Old Rectory lies the Glebe Field, which was purchased by the Parish Council in order to preserve the ambience and protect it from development.  It was used as a paddock for horses and had become invaded by scrub, ragwort and bracken, but now with seasonal mowing and careful management with cattle grazing it is once more a grassland where cowslips are beginning to flourish. 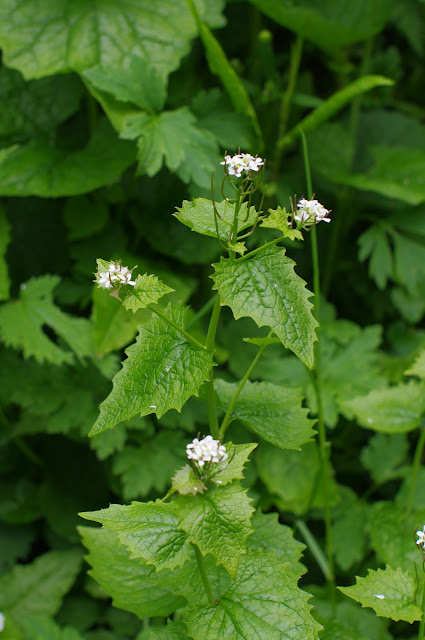 I cannot help but feel that Thomas Gray would be at home here.  To rest your head upon the lap of earth in this quiet churchyard would not seem so bad. 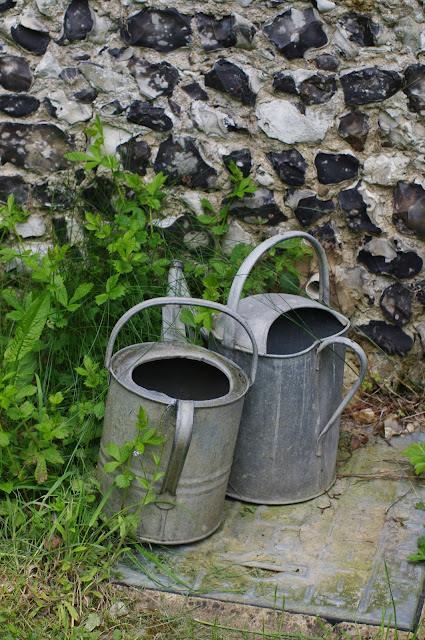 And if, in the meantime, you happen still to be alive then you could do worse than stroll down the path and drop into the flagstone floored public bar of The White Horse.  This pub wouldn’t have been quite the same in Thomas Gray’s day, but it might well have been similar, with beer straight from the barrel, natural fires blazing on the two hearths, a pretty flower garden out the back, and somewhere to hitch your horse in the front.

“The curfew tolls the knell of parting day…..”  It’s time for a pint! 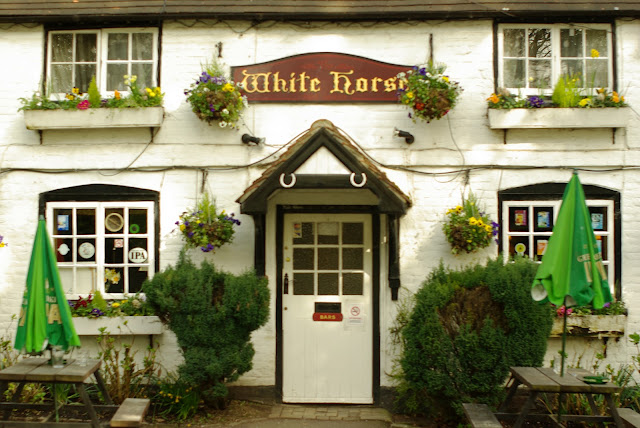