This is our house. Welcome! It was built in 1883 by John Palmer Benstead (7th June 1828 - 24th February 1887). John was the illegitimate son of Elizabeth Benstead, who married Richard Folker, a farm labourer, in 1834. In the 1841 census John Benstead is recorded as a farm labourer, living alone in Heacham. He then worked for Thomas Savory at the Old Bakehouse in Ladies' Walk and married Mary Ann, his employer's daughter, in 1851. They had seven sons and four daughters, though one of these was stillborn.

Mary Ann, and John, had a bakery in the Market Square from 1851 until Alma House was built, at a cost of £900. In the 1860s and 70s the population of Snettisham was 1,233 and there were four other bakers in the village

When John died the business remained in the family. The photograph of the house in 1905 shows Frederick and Emma Benstead with their young son Bob. Apparently he took over the business from his brother Tony some time before 1930, and maintained it until his retirement in 1967/68.  He married Nellie in the 1920s and had a daughter, Mollie, in 1927 and a son, Alan, in 1930.

Bob Benstead made bread, cakes and pastries, using a coal fired oven in what is now the kitchen.

Bob delivered to Snettisham and the neighbouring villages of Sedgeford, Fring, Ingoldisthorpe and Dersingham.  He had a cart and a donkey, which lived in this shed: 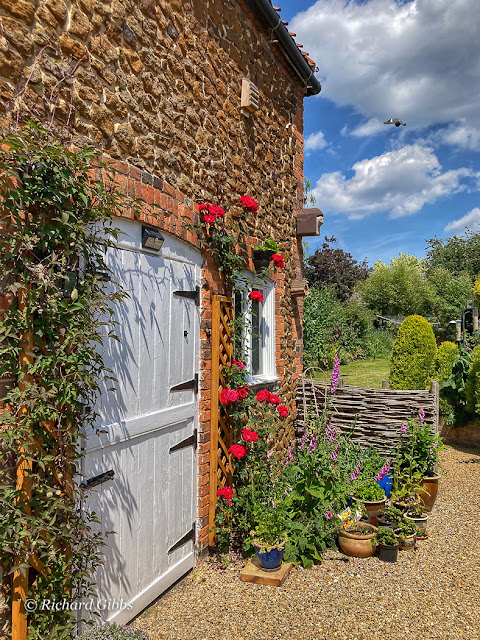 There was no inside kitchen in those days, nor a toilet or a bathroom - the outside earth toilet being beyond the donkey shed, with a large and a small wooden seat. The first bathroom was put in in around 1960.
This room, now a dining room, was the main living room: 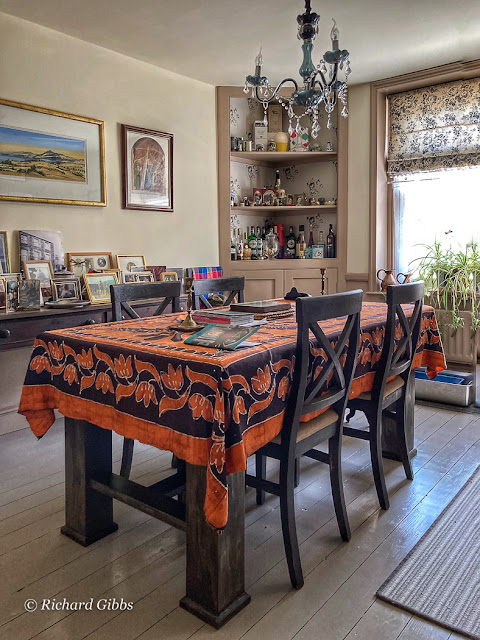 And this, now my study, was the front parlour: 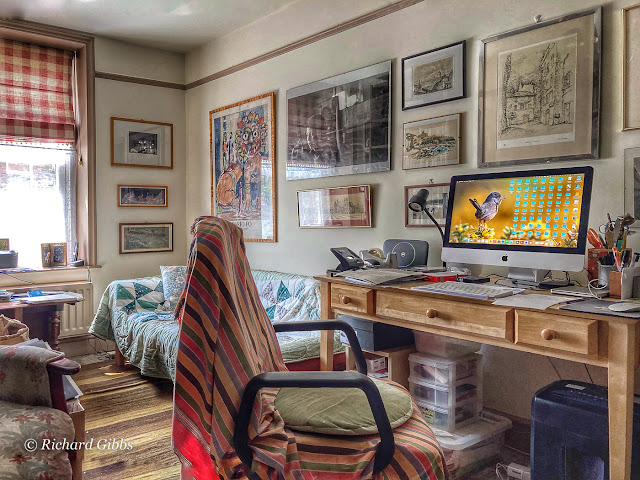 Many years ago, when Graham Nash was living in Laurel Canyon at Joni Mitchell's house, she brought home some flowers one day, and he composed a song, which he entitled Our House:

Our house
Is a very, very, very fine house (very, very fine house)
With two cats in the yard
Life used to be so hard
Now everything is easy
'Cause of you
And our
I'll light the fire
While you place the flowers
In the vase
That you bought today
I suspect it loses something in translation, and I should point out that we actually have three cats, but the sentiment (and it really is rather sentimental) fits our very fine house......
Of course we are nowhere near Laurel Canyon, but Snettisham is a fine village: 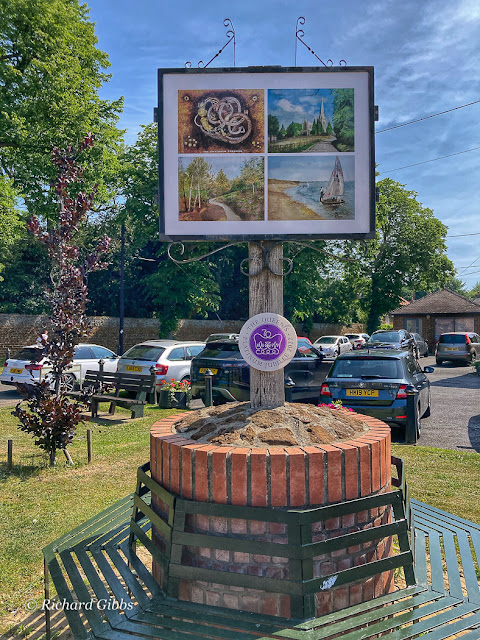 With, as you can just see in the top left of the board, pride in the Snettisham Hoard, or Snettisham Treasure, which consists of a series of discoveries of Iron Age precious metal, found in the area between 1948 and 1973. The hoard consists of metal, jet and over 150 gold/silver/copper alloy torc fragments, over 70 of which form complete torcs, dating from 70BC. Probably the most famous item from the hoard is the Great Torc from Snettisham, which is now held by the British Museum. Though the origins are unknown, it is of a high enough quality to have been royal treasure of the Iceni.....
The village has a fine church - St Mary's - which, according to Nikolaus Pevsner, is perhaps the most exciting Decorated (ie English Gothic from between 1290 and 1350) parish church in Norfolk, with its 175 ft tall spire (rebuilt in 1895) and its fabulous six-light window in the west front..... 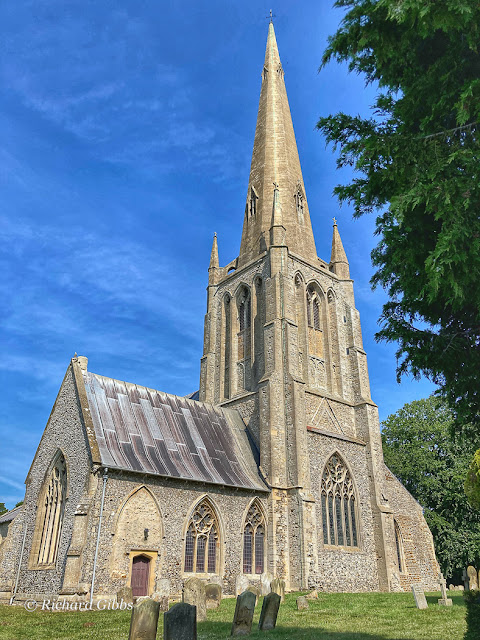 The village also has a handsome 17th century Old Hall, built, like our house, of carstone (quarried just up the road) with brick dressings: And, in a discreet way that puts most other villages to shame, there is a wonderful book shop, named after the Great Torc: 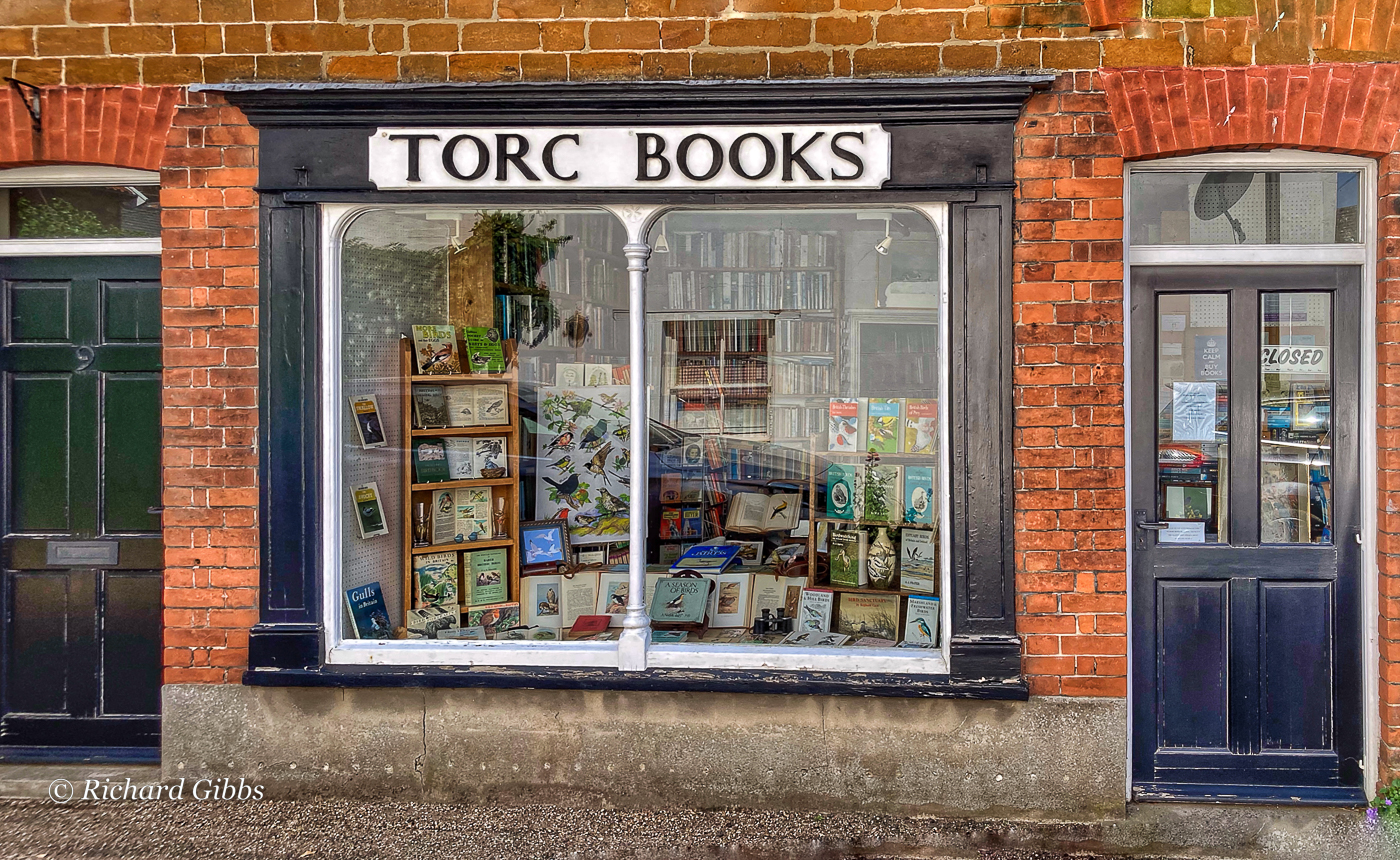 Perhaps inspired by this, and possibly as an indication that life is healthy here so we don't need a village defibrillator, the telephone kiosk now hosts a book swap: 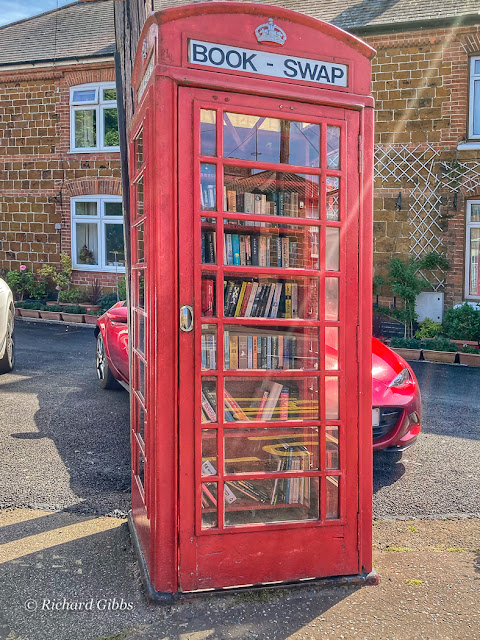 And though there is no longer a Post Office (the post van visits four days a week), the main post box is a priority one, especially decorated by the WI for the Platinum Jubilee: 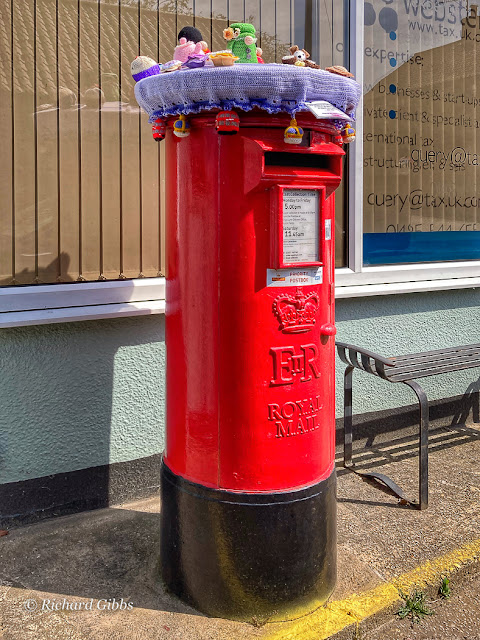 And in case you were wondering, there are two pubs, one of which dates back to the construction of the church, as apparently it was raised to accommodate the masons involved in that holy work. 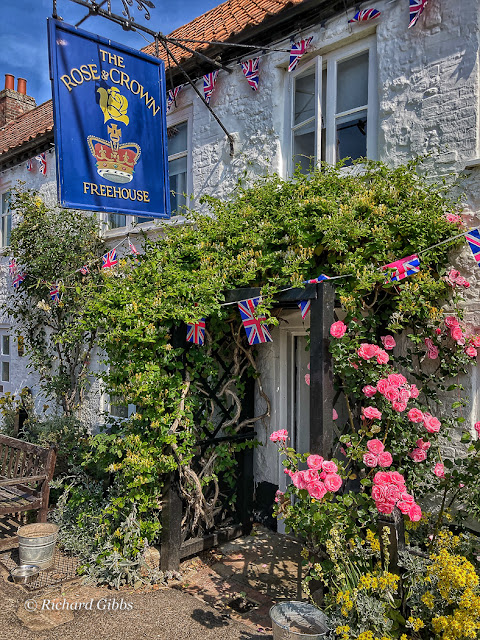 In addition, in the spirit of Mr Mainwaring, the village has an Old Bank, though it is now a family run restaurant, named The Good Food Guide Best Local Restaurant 2019 for the whole of Britain and soon after was also listed in the Michelin Guide. 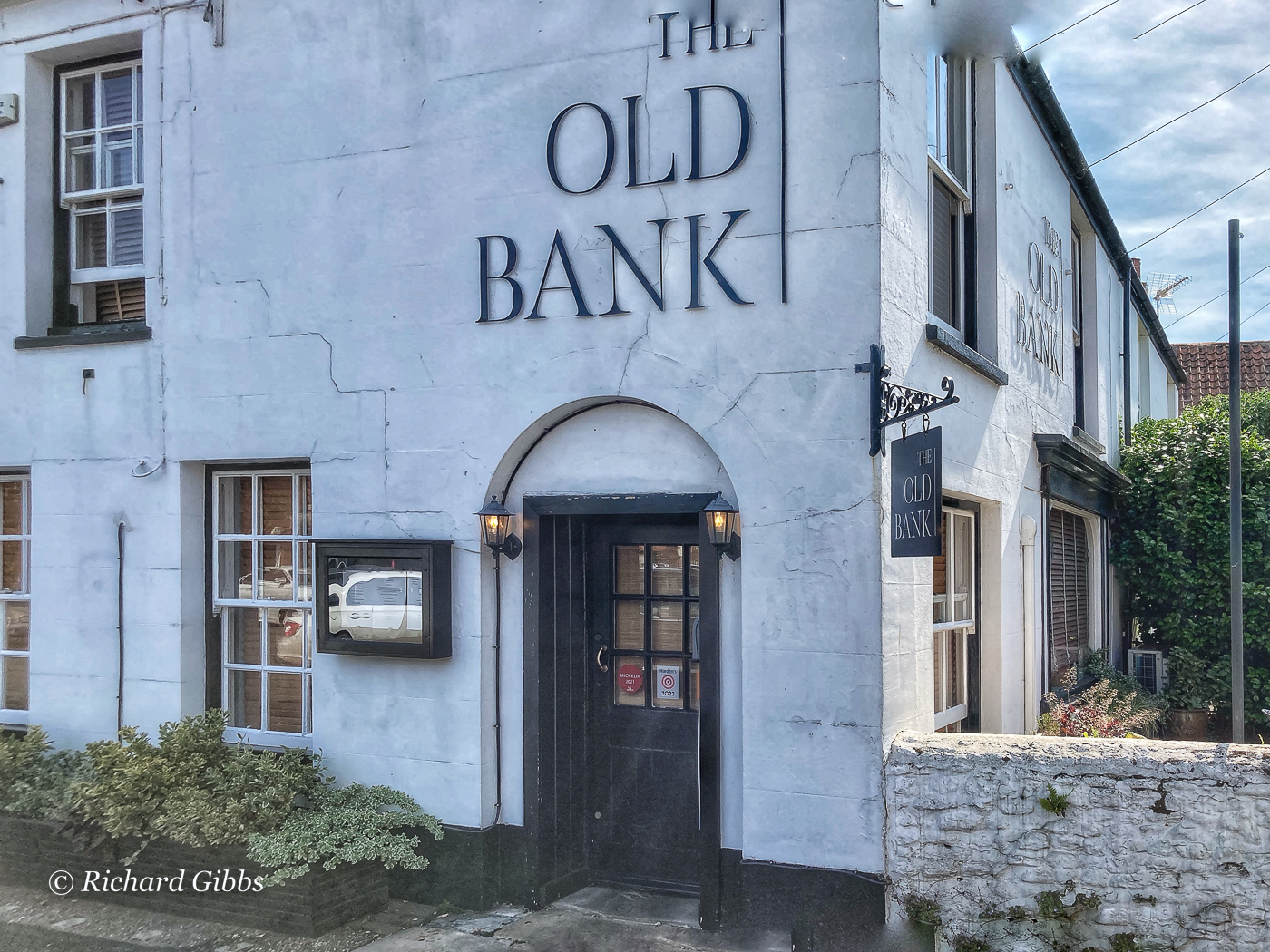 The village is near the sea, just a 45 minute walk from the Wash, over 60 metre high Wild Ken Hill (renowned for its rewilding and for supporting the careers of Chris Packham and Michaela Strachan.....) and across the marsh, which used to be (and probably will be again) under the sea. 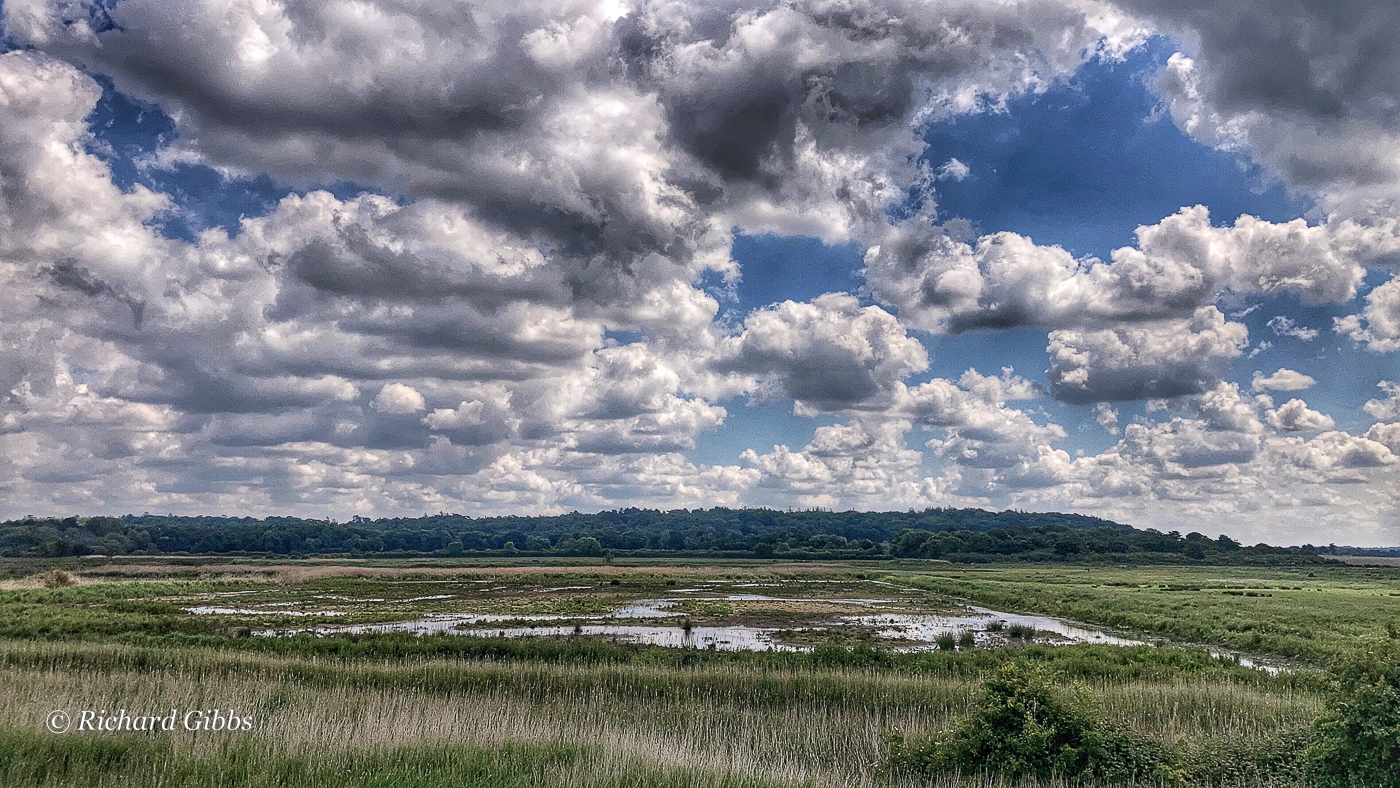 Indeed, although the weather this year has been dry and warm, there have been times when the heavens have opened:
And the proximity of the sea, and the unpredictability of the weather, have taken their toll: 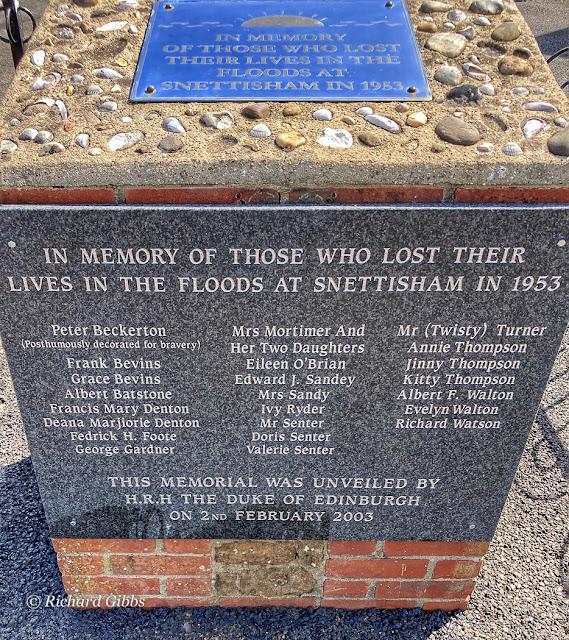 We moved here at the beginning of 2021, and our house is currently our home, for which I have no regret.
I won't claim to be a big fan of Graham Nash, but I recognise his temporary joy in living with Joni Mitchell. I have temporary joy in living with Amanda, though, as with everything, it won't last.
I cannot claim to be a big fan of Madness, either, though that depends on how you define the term. I can now sympathise with Mr Rochester when he fell for Jane Eyre, and I can empathise with Grace Poole (the stout, middle-aged, red-haired seamstress who works as a servant at Thornfield Hall, who is secretly the nursemaid and prison guard for the insane Bertha Mason.....) - though that is not the only reason I drink.....
But I do like Suggs, and Madness's Our House is a hymn of joy:
Our house, in the middle of our street
Our house, in the middle of our
I remember way back then
When everything was true and when
We would have such a very good time
Such a fine time, such a happy time
And I remember how we'd play
Simply waste the day away
Then we'd say nothing would come between us
Two dreamers
Daniel Woodgate / Graham Mcpherson / Lee Thompson / Christopher Foreman / Michael Barson / Cathal Smyth / Mark Bedford