Life and death and so on......
When I was a teenager I didn't think I would live beyond twenty-five: don't ask me why. I don't think I had any idea why at the time, and I certainly can't think of one now.
But since I have passed my allotted three-score years and ten, I think I have proved myself wrong (and not for the first time....)
Anyway, I am getting used to the idea of death now, as there is a lot of it about, even though my first experience was probably when Tiddles didn't come back from the Vet (which would have been around 1961 or so) and then when two of my budgerigars were found face down on the sandpaper with terminal dehydration.
Since those fateful days a succession of grandparents, parents, uncles, aunts, friends and pets have taught me that when you're dead, you're dead. Absolutely. Brown bread.
So I wasn't exactly shocked the other day when I rang my old friend and mentor, David Craig, and learned, from Anne, his widow, that he had died last November. It was sad news, certainly, and I was very sorry I had not known in time to pay my respects at his funeral, but since the last communication I had had from him was a Christmas card in 2020 that said it would probably be the last he would send..... I was not  completely surprised.
Indeed, I had a sense that he had been preparing for his demise for some time. In 2013 he wrote to me that We're nae deid yet (an Aberdeenshire saying).... and in 2018 he sent a card saying We're both very old now, but not too bad in our minds - I think..... In fact I saw them at Easter that year on my way to spend a couple of weeks volunteering for the RSPB on the Mull of Galloway, and they were pretty good (despite the odd grumble).
I first encountered David when he lectured on the poems of Bertolt Brecht in 1969, my first year at Lancaster.  This was something of an epiphany for me and Coal for Mike still resonates - for comradeship.
For more of the story, and atmosphere, of Lancaster in those troubled years, please see:
https://www.richardpgibbs.org/2018/05/lancaster-affairs.html
I got to know David, and Jill, his then wife, quite well in my second year, and better still in my third year when he took over the Creative Writing module from Frank Goodridge.  He was a patient and thoughtful teacher.  Whatever drivel I produced was treated with respect and so it was with some excitement that when I wrote to him from Italy in 1983 saying I was thinking of returning to the UK to take a Master's degree he replied immediately, inviting me to take his MA in Creative Writing.
And so it came about.  Amanda and I lived in Burton in Lonsdale, and on occasions I would walk to visit David at his home in Burton in Carnforth, wading across the Lune on the way.
We had a great year, with workshops with the likes of Kazuo Ishiguro and Bernard MacLaverty, and weekends in the University's farmhouse high on the shoulder of Ingleborough above Clapham.  We went on a day trip to Sellafield, which, in a letter to me in January 2013, he recalled.  I had sent him a paper copy (he struggled to read my pieces on the computer) of  my blog about my paternal grandfather's experiences in the First World War: (https://www.richardpgibbs.org/2012/11/remembrance.html).  He replied:

He continued: Among all your pieces it is the Vatican banker/Timon (https://www.richardpgibbs.org/2012/08/timon-of-athens-divine-power-of-money.html) and now your grandfather's diary that have impressed me.  The others have struck me as well short of what you can do -  as rather old-fashioned magazine fillers, without enough personal centre, or unexpected information, or indelible imagery.  Excuse my being hard to please; I'm assuming you'd rather candid opinions than vague courtesies.....
We remained friends..... It was his candour and honesty that made him such a fine man.
And I wasn't alone in being told I was generally lightweight; in his piece on Robert Macfarlane's Landmarks for the London Review of Books in September, 2015, David wrote: The rest of the book – described on the dust jacket as ‘a field guide to the literature he loves’ – seems to me less valuable, less significant..... Macfarlane’s book is different from the work of such writers as Jim Crumley, Mark Cocker and Richard Mabey. Where they stay with a region or a species for long enough to sink into it and pass, as nearly as can be, inside it, he veers from one writer or locale to another.
David was an excellent writer.  I have just re-read Native Stones, his 1987 book about climbing.  As Jonathan Raban said, This is no more a book "for" mountaineers than Moby Dick is a book "for" whale fishermen.
As David explains, I am a middling sort of club climber at the flickering age of fifty-four, but, as he goes on to say, his approach lies in what are now the back dales and easier-angled crags.  My climbing grew late out of a lifelong fascination with nature, consciously escapist and very much concerned with the secretion of poetry and expressive prose. 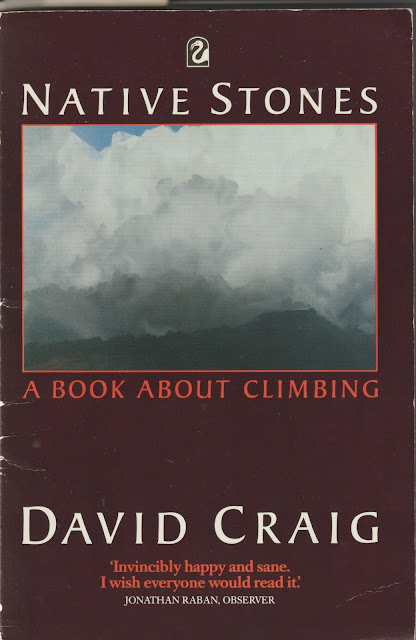 I can hear David's soft, Aberdonian, voice in every sentence of this book, and his spare prose is a joy to read:  Dow Crag and the Old Man of Coniston stand up in the north-west as we look from our bedroom window and Dow's gullies show clearly in snow, white veins on black, Great Gully and Easy Gully slanting between the buttresses..... This is a deceptively simple sentence, but manages to pinpoint two locations, and steer us to see one through the eyes of a gentle, enthralled couple in their bedroom, who can precisely name distant features of the wintry landscape with affection and awe.
Two years after Native Stones was published, David wrote me a long letter in his slightly difficult longhand, in which he recounted the death of his beloved Shep (pictured at the head of this piece on a day when we walked in the Lake District). Talking of Shep, we had to have him killed in July. We'd always said that if his legs went and he had to drag himself around, that would be it - nothing left for him but a poor life we wouldn't want to live ourselves..... So we nerved ourselves to the euthanasia at last - took him to the vet at Kirkby, whom he knew well - he shaved his foreleg, slid in the needle, as we hugged him - stillness - absolute stillness - then a profound sigh, and another, as the very last air went from his lungs.
David's last book, Paradise and Wilderness,  was published in 2019 and is his own selection of poems from his writing life. A note on the back cover states that David, was born in Aberdeen - 'the granite city'.  many of the poems are uncompromising when tackling the inhumanity of man.  But alongside, there are poems of family and relationships that are sensitive, tender and ultimately hopeful that human kind can make this a better world. 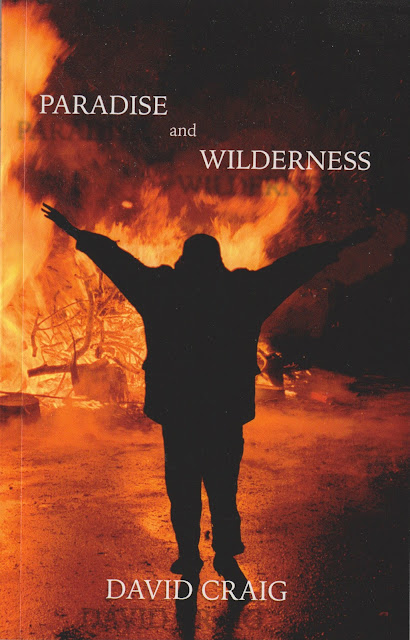 I hope that he won't mind me quoting from this collection?  It is hard to choose a few lines, but perhaps the last stanza of Old Man Blues (2) fits here well enough....
A much worse hell, would be to lengthen out his days
Behind a screen of sound-proof one-way glass,
And see his dear survivors playing and talking,
Cooking their meals.  You wave and call.
They ignore you, they know you're dead,
You don't. And none of this can happen,
Since there is neither hell nor heaven at all,
Only an infinite richness
On which the sun sets, moments after it rises.
As I said at the beginning, there's a lot of death about, from the terrifying accounts of torture and murder in Ukraine, to the vast numbers of victims of the pandemic, to the more natural passing of friends and family.  Having called paramedics to my wife's bedside this morning on the suspicion that she might have had a stroke, we live with the prospect all the time.  Some say that we are the only species with foreknowledge of death, though having noted solitary miserable birds outside the social limits of their normal flocks, I don't subscribe to such elitism.
As Roy Eldridge once said, No matter how hard you try, you can't get out of this world alive.  I am grateful for my life, so far, and for the fact that it involved the comradeship of David Craig.
And if ever any of my writing touches a chord, or is at all effective, that is quite possibly due to the mentorship of David Craig.
Requiescat in pace, Dave.....  Thank you. 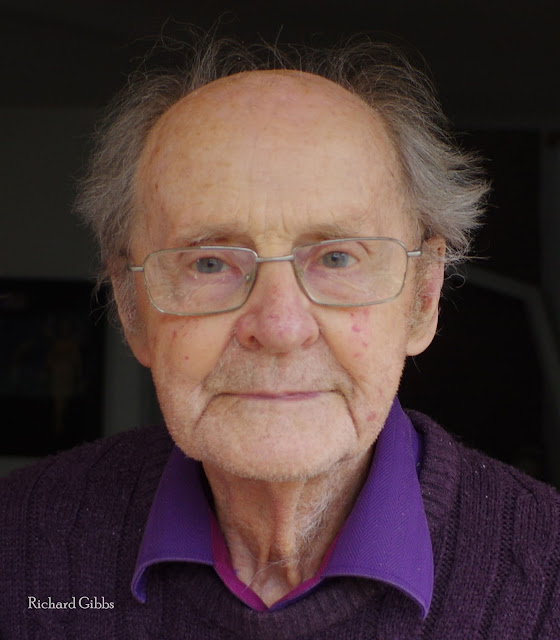