Ramblings from a graveyard, and other things..... 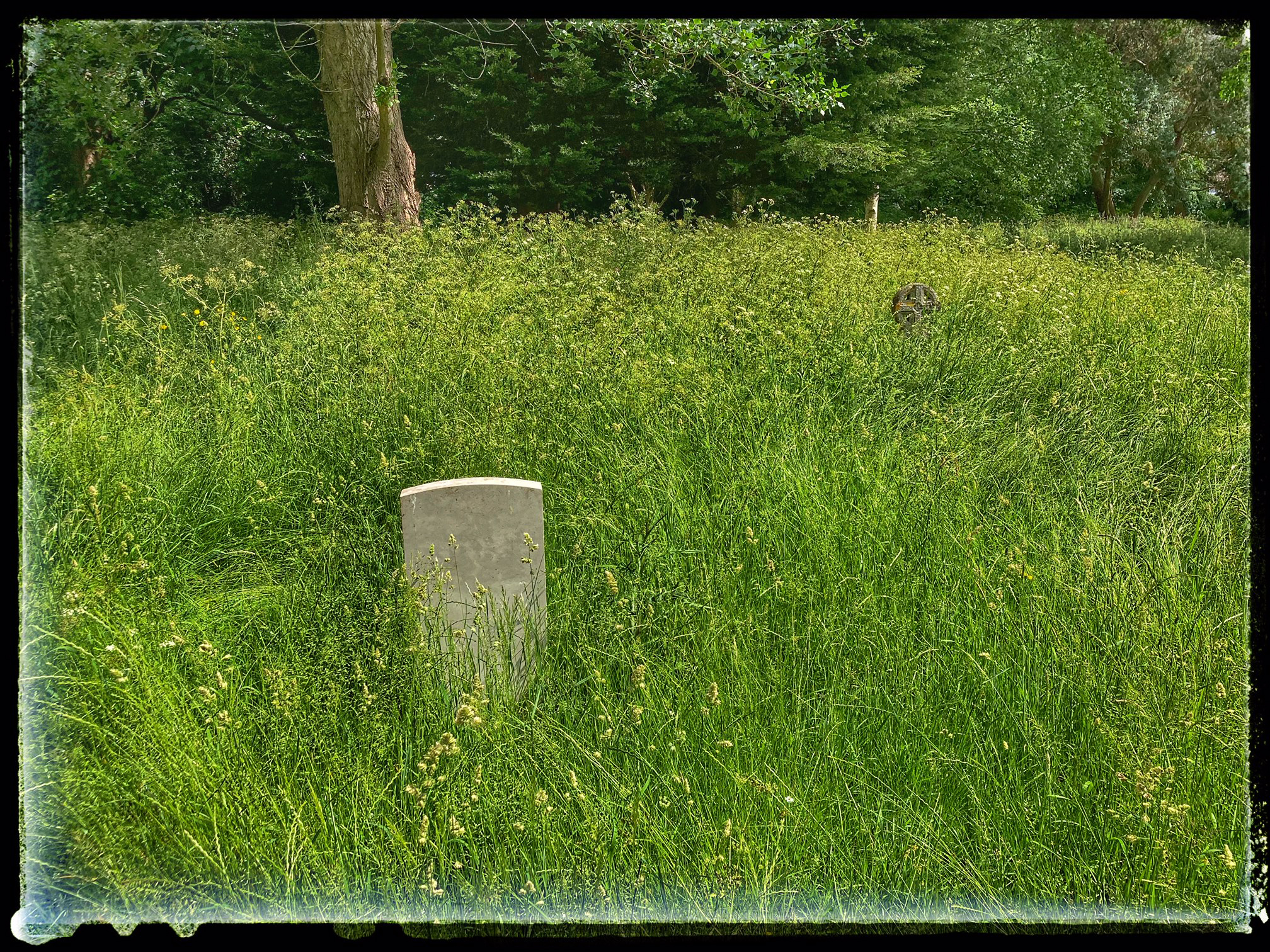 I am in Hardwick Road Cemetery, King's Lynn. Literally, but not interminably...... And naturally enough, the environment lends itself to thoughts on mortality, and such.
This smooth lozenge in the photograph above, almost lost among the long grass, commemorates the life and death of Ordinary Seaman A W Bruce, RNPS, of HMS Ouzel.
At first, as the long stems of grasses obscured some of the lettering, I made the error of thinking he may have been Andrew Bruce, Telegraphist, who died when Battleship HMS Barnham went down on November 25th, 1941, which was quite a story.
However, this was not the man (and I should have realised as I doubt whether that poor soul had a body to bury here.....) No, Ordinary Seaman A W Bruce was on HMS (or HMT) Ouzel, a trawler, acting as a Patrol Vessel (76 GRT), which struck a mine on November 3rd 1941 and sank in the North Sea, a half mile off Mablethorpe, Lincolnshire with the loss of all hands.  So why was this grave marked 25th November?  And then why, when I researched the death toll of the incident, was there no A W Bruce listed in the casualties?
Again I leapt to conclusions, as the casualties were listed on The Lowestoft Naval Memorial which commemorates nearly 2,400 men of the Royal Naval Patrol Service who died during the Second World War and have no grave but the Sea. The memorial is situated to the north of the coastal town of Lowestoft, in a wooded garden, known as Bellevue Park. The memorial itself is on the edge of the cliff looking out across the foreshore and sea where in former years the men and vessels of the Royal Naval Patrol Service kept vigil.
So I surmised that perhaps A W Bruce had survived the mine and died later of wounds....
Yet again my negligence appals me.  Brushing aside the long grass, I discover that the date of death was 25th November, 1940 - not 1941!  So Archie William Bruce, aged 30, died aboard HM Patrol Craft Ouzel almost a year before his shipmates met their watery end.
What killed him remains, to me at least, in my ignorance, a mystery, but there is his story.....

Regarding my initial mistake, that is another, terrible, story.
According to the Records of the Royal Navy, HMS Barnham took part with QUEEN ELIZABETH, VALIANT and screen of eight Fleet destroyers for provision of cover to cruisers of 7th and 15th Squadrons carrying out search for military convoys on passage to Benghazi (Operation ME7).
November 25th - Under constant observation by enemy aircraft. Under attack by U331 and hit by three torpedoes which struck between funnel and X turret on port side. Ship sank in position 32.34N 26.24N within 4 minutes after the magazine detonated. (On VALIANT, the closest ship to BARHAM when she was hit, was the Gaumont News cameraman John Turner who shot 2 minutes of movie film, all he had left in the camera, of the sinking. This film became one of the most poignant shots in the whole war). Only 450 survived from the complement of about 1312. 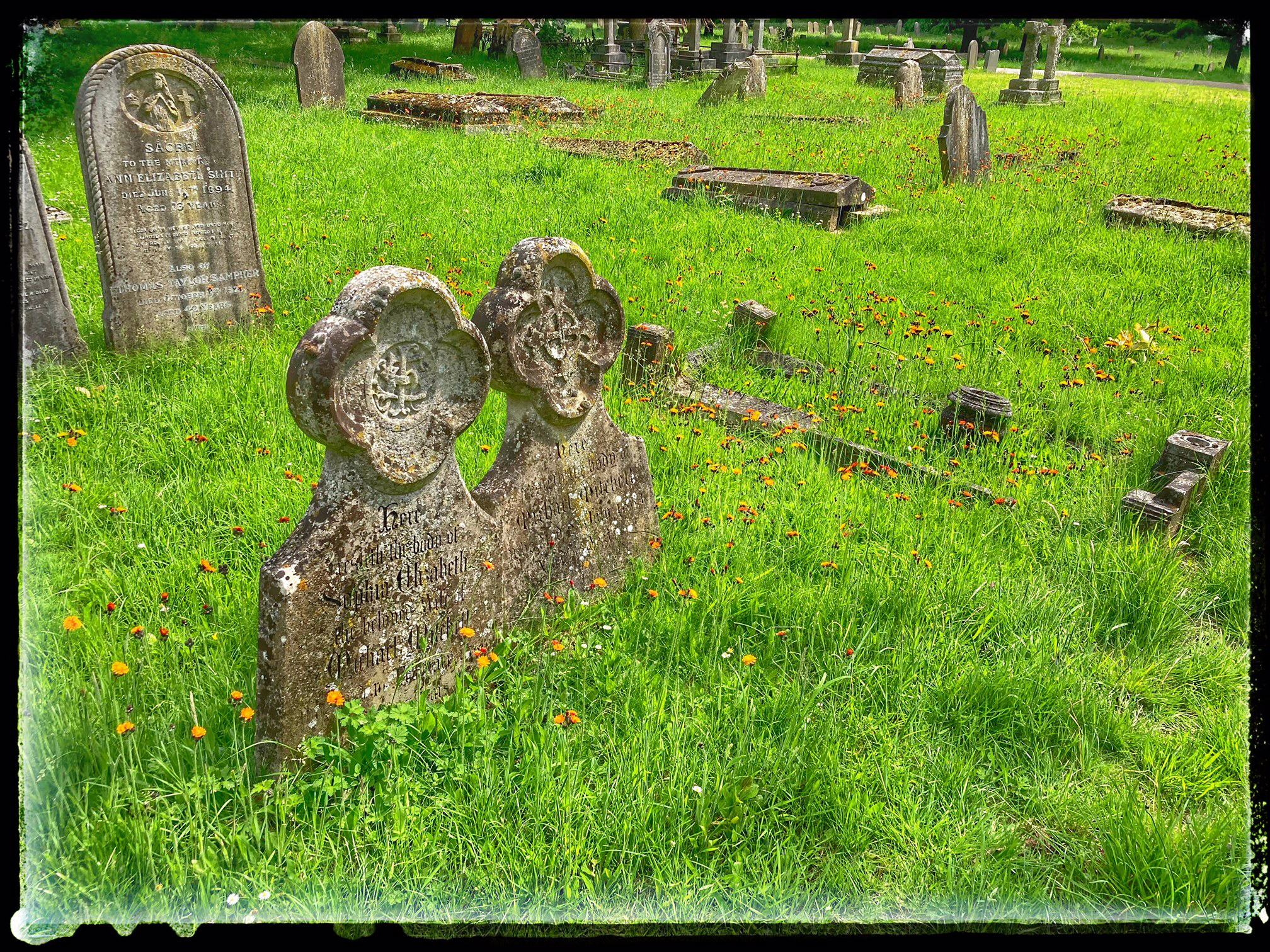 Personally I have no bone to pick with graveyards, I take the air there willingly, perhaps more willingly than elsewhere, when take the air I must.... (Samuel Beckett, First Love). Christopher Ricks, The Prof, it was who first pointed out to me the clever use of the word must in this quotation...  let alone the mischievous use of no bone to pick.....  Or, let me think?  Was it the other way up? Did I point it out to Christopher?  We were in Cambridge, in the mid 1980s and I do vaguely remember our discussion.

And it would only have been a year or so adrift from then that I had lunch with Mr Beckett chez Chartier in Faubourg Montmartre.  Godot, those were the days.... Happy Daze.

Anyway it was a faulty valve that brought me hither....  Not so much a mitral nor a tricuspid, you know, but the valve on my Skoda's off side rear tyre, which I had had repaired after a small screw had caused a minor puncture last week, only to find it flat the next day at home.  Ho Hum, and back to the garage (who acknowledged fault in their valve core) to wander fitfully amongst the dead whilst said valve was bypassed and my treads could once more hold up against the wear and tear of revolution.....

Anyway, underneath the gloomy Wellingtonia, and not that far from the Tulip Tree, I read some of the stories of King's Lynn in days of yore.....

Such as that of Catherine Brown (1812 - 1863) first wife of King's Lynn sculptor and monumental mason William Brown of London Road.  Catherine was one of seven people to be killed in the Hunstanton-King's Lynn Railway disaster on August 2nd, 1863.  Her sandstone and encaustic tile monument was designed and made by her husband. 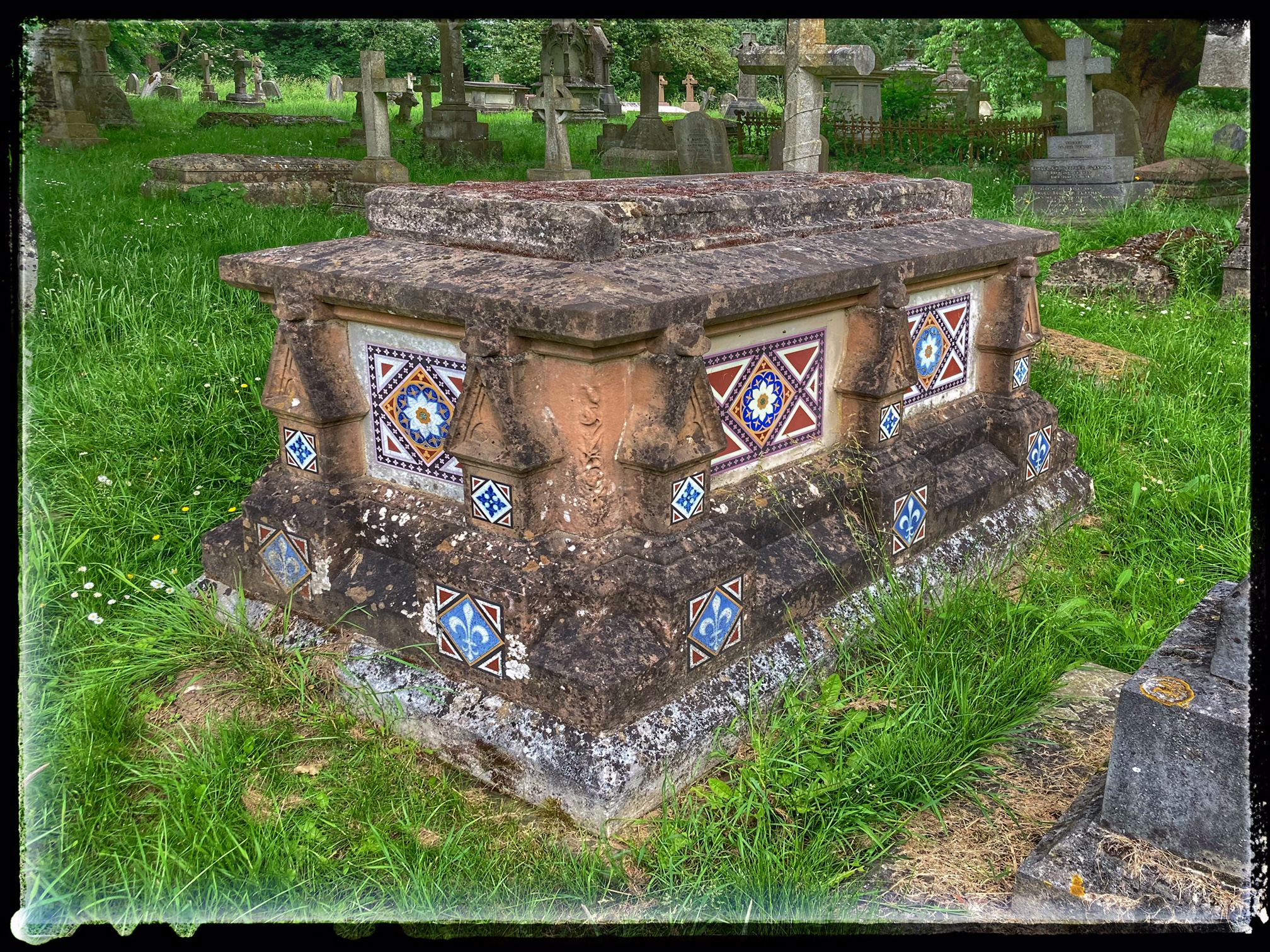 Apparently a bullock had gotten upon the line near Wootton, about two miles from Lynn, and it caused the excursion train, which had left Hunstanton for Wisbeach at about eight a.m. with some fifteen well-filled carriages, to leave the rails, causing disruption, injury and death in its wake.

Hard  by this elegant tomb is the memorial to her husband, William, and his brother, Edward. This was sculpted by King's Lynn mason Edward (1834 - 1888).  Of clunch stone, it is the largest monument in the Cemetery. 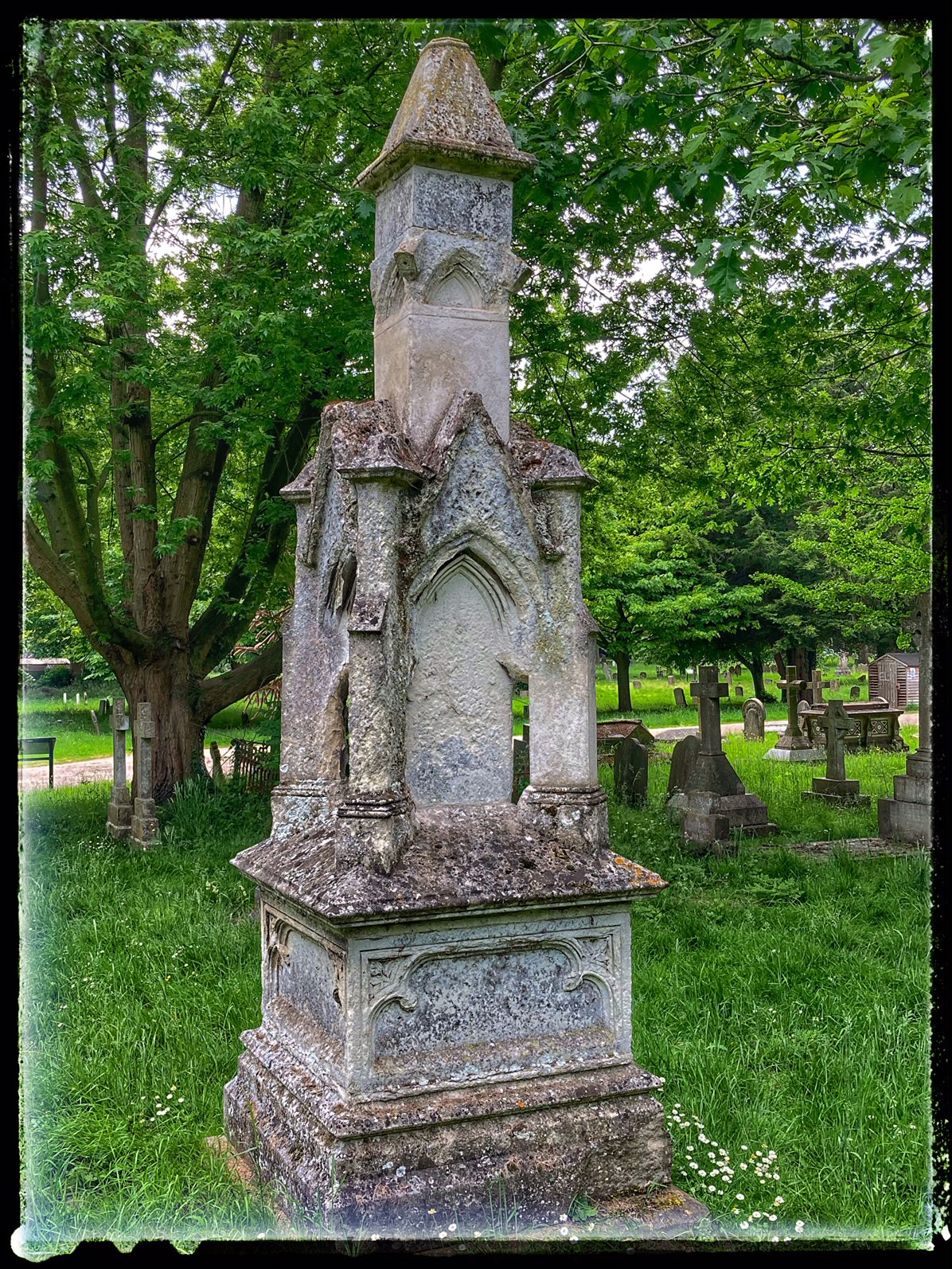 The cemetery is no longer active. Or rather, it is now passive, in that no longer may the living prepare themselves for the ground here.  The chapels have long since been erased, and all that is left is the shifting silences of the air around the stones and through the leaves of grass.

The stories remain, however, like that of George Cozens (1801 - 1869), hotelier, proprietor of the Cozens Commercial Temperance Hotel in St John's Terrace.  This was the last of Norfolk's temperance hotels, closing in 1969.  Apparently it once boasted that its stables could accommodate 120 horses. 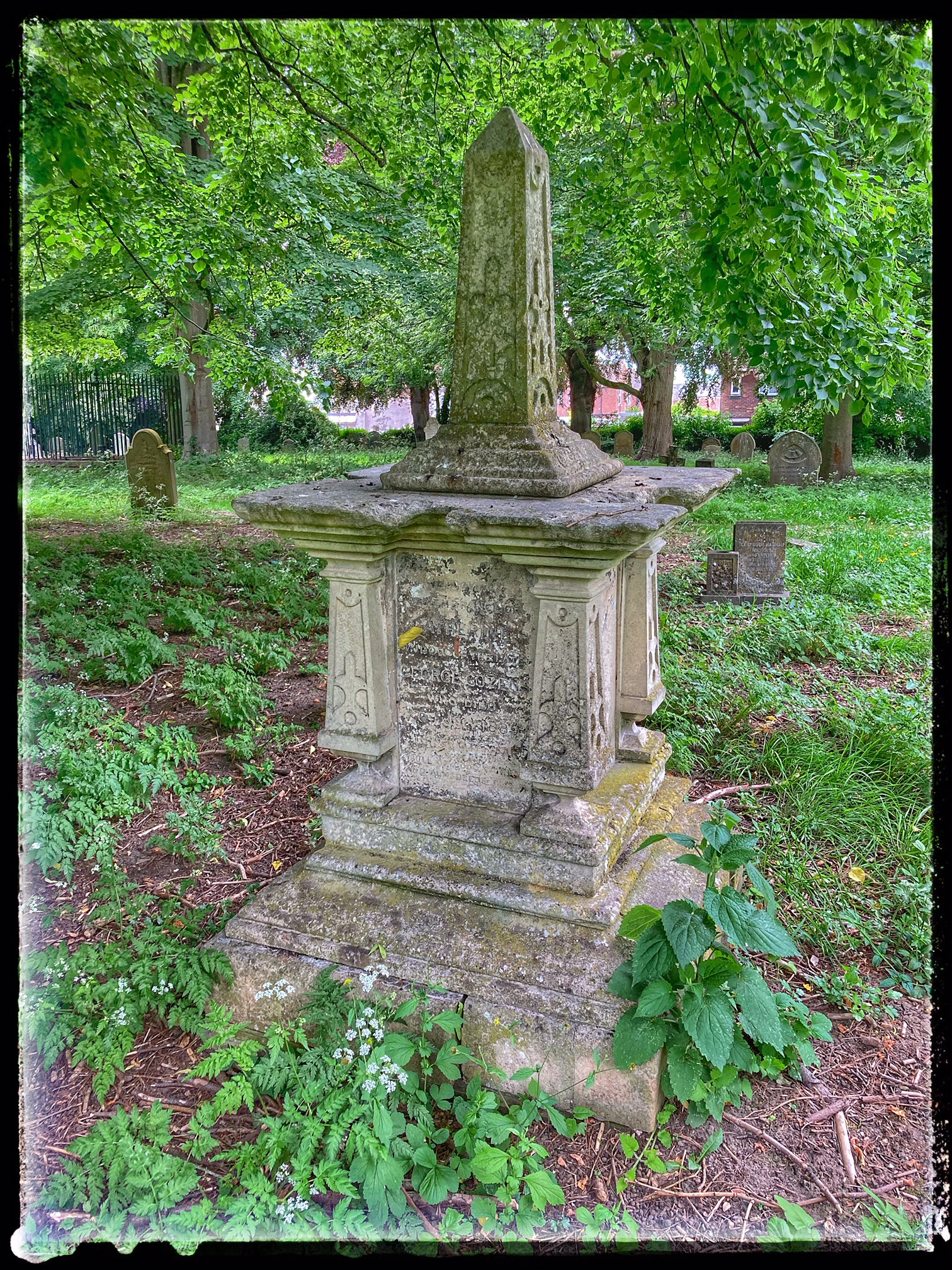 It's not just that this cemetery was in the vanguard of 19th century burial reform (I just love that tone - Stonehenge was in the vanguard of monumental masonry......)  But its establishment in 1849 marks it out as one of the first parochial cemeteries in Great Britain, anticipating the Burial (Beyond the Metropolis) act of 1854 by five years......  Its importance to King's Lynn as an early example of Victorian cemetery landscape is immense, and the variety of monuments it has to display is a bold reminder of the Victorian Way of Death.....

Did the Victorians have a different way of death?  Do the bones interred here feel better because of the landscape?
To die, to sleep,
No more. And by a sleep, to say we end
The heartache and the thousand natural shocks
That flesh is heir to — ‘tis a consummation
Devoutly to be wished. 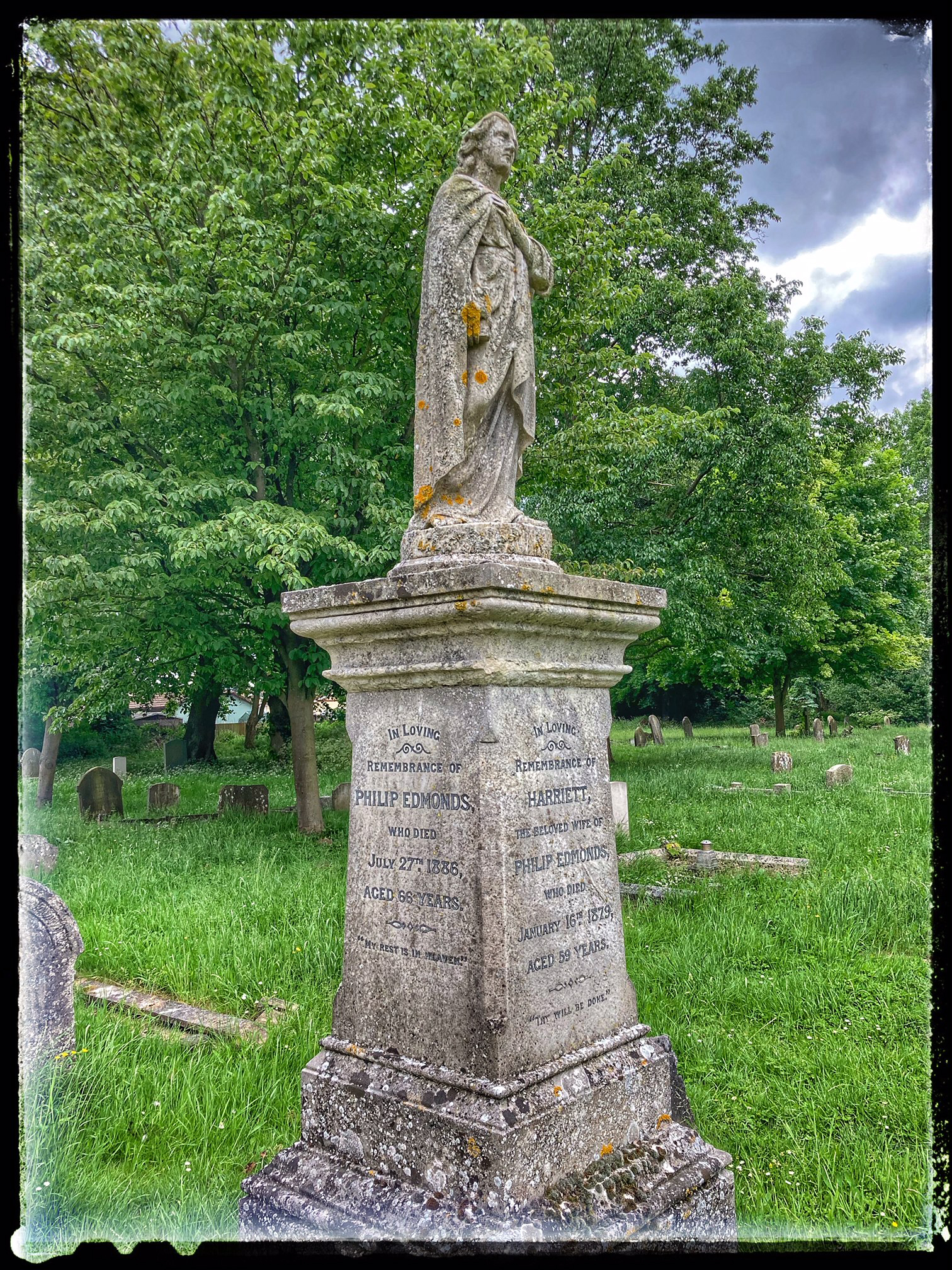 To die, to sleep;
To sleep, perchance to dream. Ay, there's the rub.
For in that sleep of death, what dreams may come
When we have shuffled off this mortal coil
Must give us pause. There's the respect
That makes calamity of so long life.

[As I said to Samuel, not long before his death.  Could you please pass the salt?

[I wish to extend my apologies for the mistakes I made in initially putting this piece together, and wish to record my sincere thanks to all those who died at sea in the defence of our homeland.]