Italian Villa for sale
- one careful owner
- needs some restoration 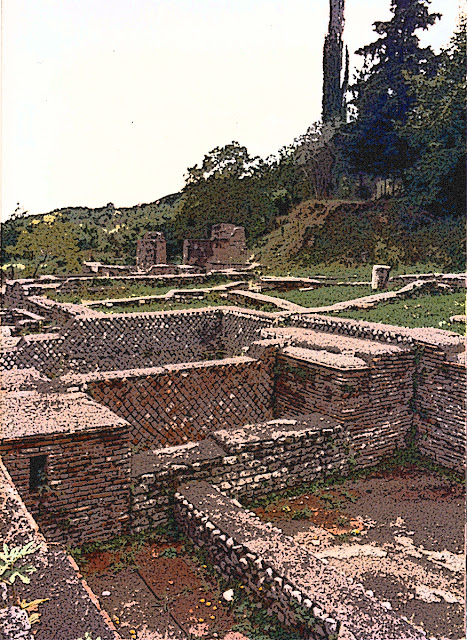 I want out.  I need to move.  Am definitely (maybe) thinking of going back to resume the life I led in Italy.  I need some opus reticulatum.....


Many years ago (I dread to count) I went to Licenza, not far from Tivoli (to the east of Rome) with a young courtesan I had fallen in with.  She had a connection with an ex-Naval Captain who had drifted ashore with his good lady CPO in this necklace of the woods....

Between them they smoked Canadian Salmon - by which I don't mean like Capstan Full Strength - (they actually smoked Senior Service).  No, they had a blackened hut in their garden where frozen corpses of Canuck Salmo salar would slowly absorb the tar from smouldering oak chippings, until they attained the rich flavour you get from the tyres on a Trans Am when you floor the accelerator at a green light.....

[I do them an injustice - it was delicious (only slightly carcinogenic)....]

Anyway, we pitched up for Sunday lunch (as one does) and almost immediately the phone rang.  Blah, blah, blah, and his Admiralty reappeared with a very large G & T for the CPO, announcing that someone they knew had just rung to say they had died.

So we made ourselves comparatively scarce....

Which meant wandering off in search of a bar.

Unsuccessfully, as it turned out.  Instead we happed on the Villa of one Quintus Horatius Flaccus (65 - 8 B.C.) 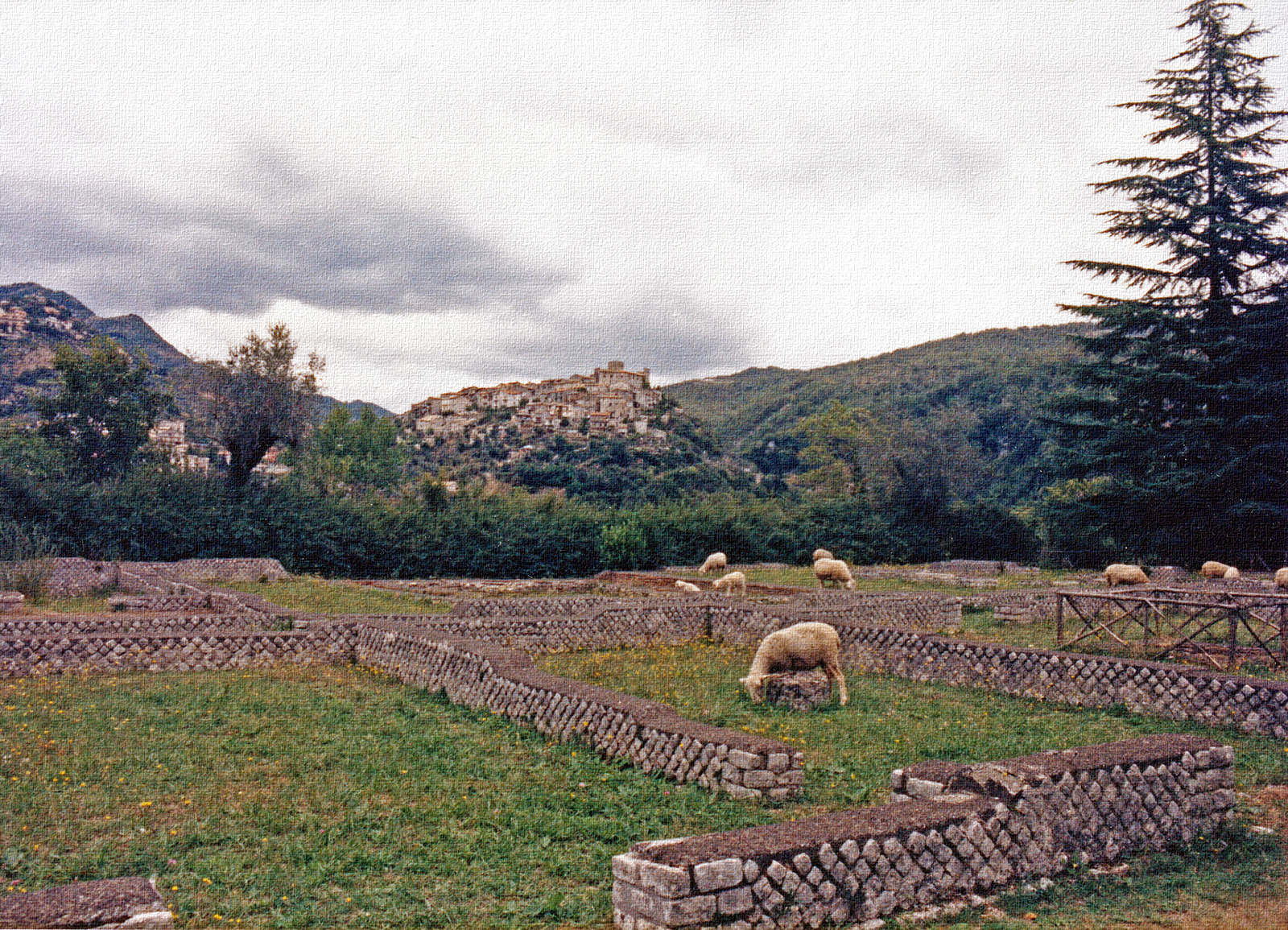 It wasn't in good shape.  He wasn't home, and his pet sheep had eaten all but the foundations.

It turns out that Horace (as he is sometimes known) was something of a cool dude.  My classical knowledge has in the main been gleaned from the droppings of our 'esteemed' Prime Minister, so forgive me if I err....

Son of an ex-slave from the Hellenist south of Italy, privately educated in Rome, then a graduate of the University of Athens, Horace dropped everything to follow Brutus after the assassination of Julius Caesar, but then dumped his shield at Philippi and scarpered from the battlefield, ruining his chances of a service pension.

Back in Rome he got a job copywriting for the Civil Service, buddied up with Virgil (no, not Wyatt's brother.... Aeneid's) and was patronised by Gaius Maecenas, a close pal of the Emperor Augustus.  It's not what you know.... 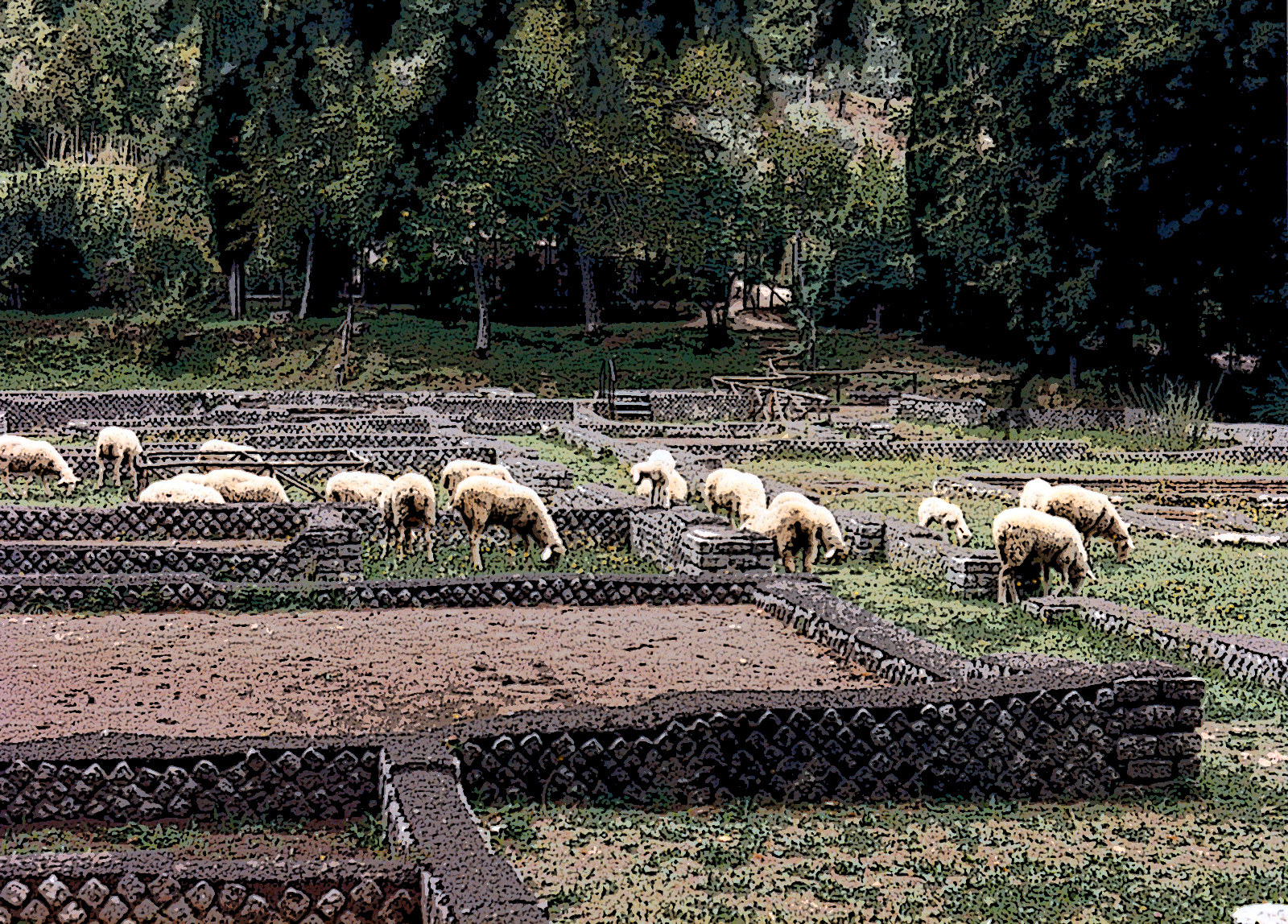 Which somehow led to our man being gifted this lovely villa in the Sabine Hills, just down the road from the smoking salmons....  Where, perhaps inspired by the odour wafting across the fields, he took to writing Odes (ouch!)

At which, they say, he was pretty good.

I have read them, but overall, they make about as much sense as a statement by certain old Etonians, being in more Latin than I remember from my 'O' Levels.

I mean!  What good is that to your average goat?  Say what you mean man!

I, who have never been
A generous or a keen
Friend of the gods, must now confess
Myself professor of pure foolishness.....


Where was I?  Ah, to return to my theme, I need out.  This lock up/down is doing my head in.  It doesn't compare with the outrage suffered by the Guildford Four or the Birmingham Six, but I begin to appreciate the waste of life that is the key to incarceration.

I would give anything to move to Horace's Villa, and to sit by an open fire, roasting a sheep with wild herbs and garlic, sipping from a jar of Falernian wine.....

Come, let's
Go to the cave of love
And look for music in a jollier key.
(Book Two, Ode I)

We don't know much about Horace, but it does seem that he was a likeable and a decent, unassuming fellow.  In Book Three, Ode 16, he says this:

The more a man denies himself, the more
God grants him.  See, I go with empty hands,
Glad to desert from the ranks of the rich to camp
With the unself-seeking bands,

Lord of the little that other men despise,
But prouder than if I were rumoured to have in store
All the corn of labouring Apulia -
A rich man, but a poor

Fool.  My few woodland acres, my clear brook,
My crops that keep faith might - though he does not know it -
Make fertile Africa's glittering proconsul
Envious of a poet. 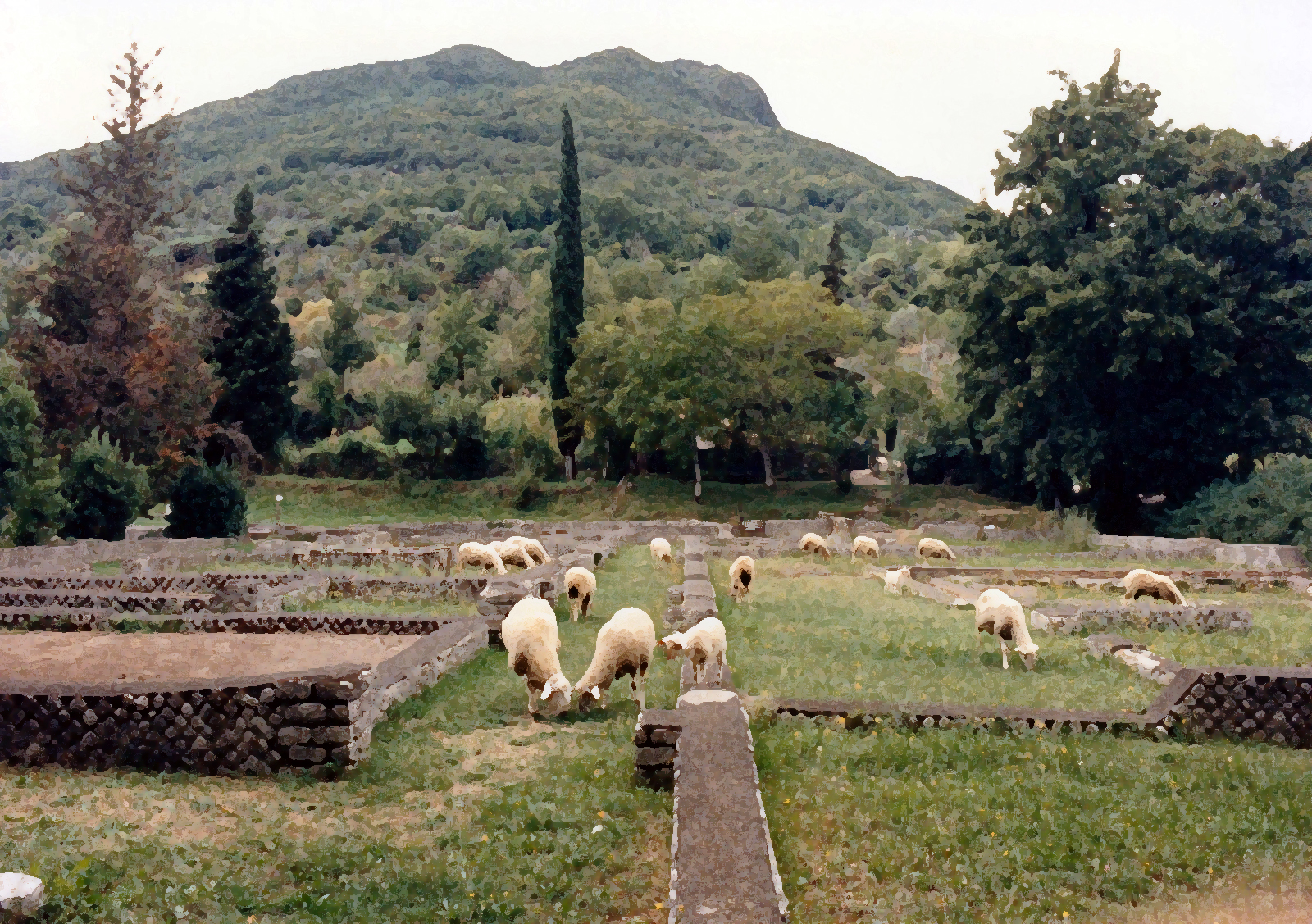 I have had happy times in England. And ultimately no move is going to salve the aches in my heart, or restore that sense of immortality and the delicious taste of youth that I still remember.

Yet be warned: each year gone round, each day-snatching hour says,
'Limit your hopes: you must die.'
(Book Four, Ode VII)

But.... Were this desirable property be on the market, despite the need for a little DIY, I would be sorely tempted to up sticks and transport myself to the Sabine Hills, where the air blends the oaky oils of salmon with the herby singe of sheep, and Bacchus is your neighbour.... 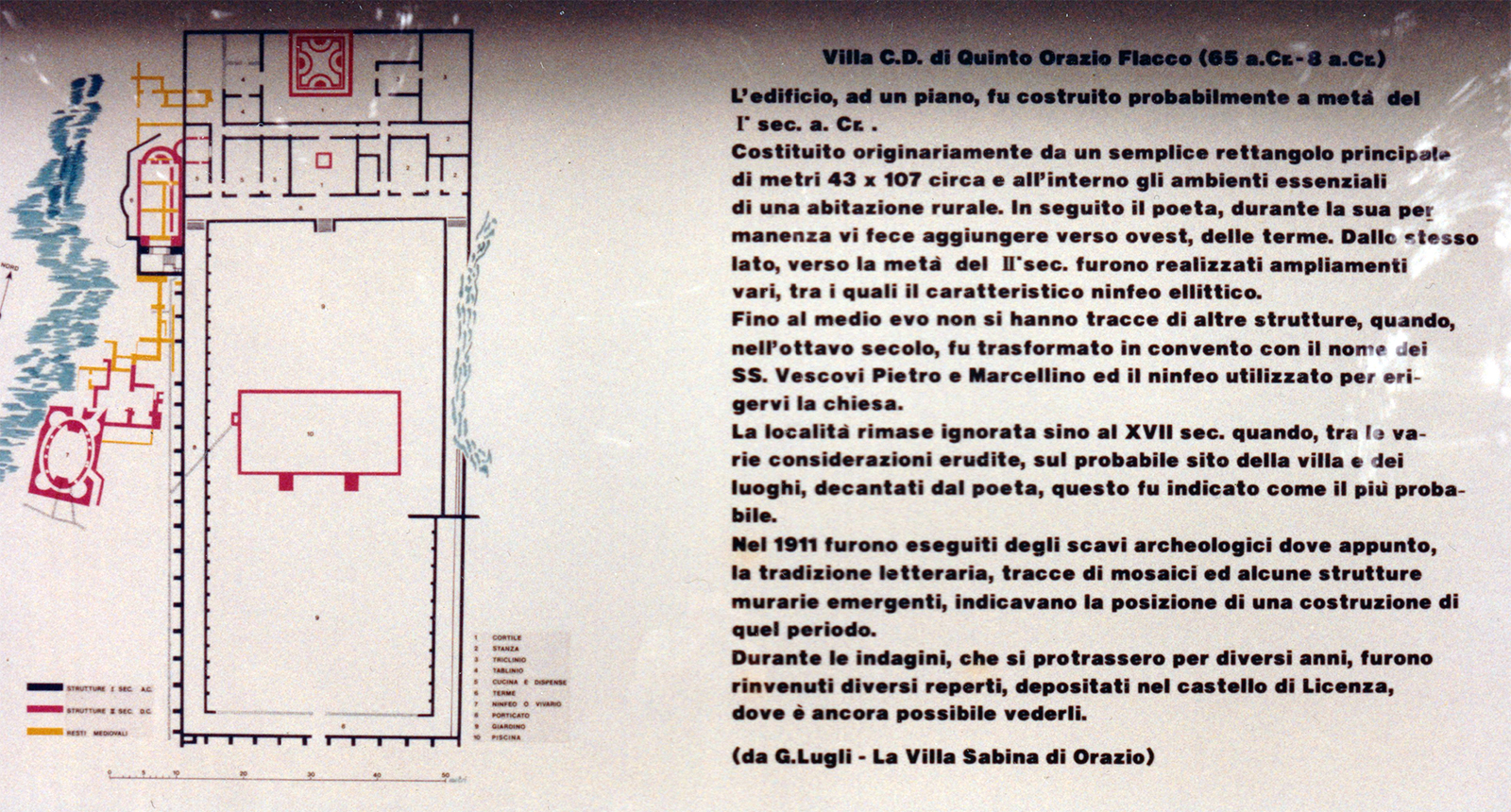 I have a jar of Alban wine that musters
more than nine years; in my herb-beds
The parsley, Phyllis, clusters
To furnish for our heads
Green garlands; and luxuriant ivy spreads

To bind your hair with, make your beauty dazzle.
The house laughs bright with silver plate.
With laurel and with basil -
Chaste boughs - we decorate
The shrine that for the lamb can hardly wait.

[With many thanks to James Michie
for his translations] 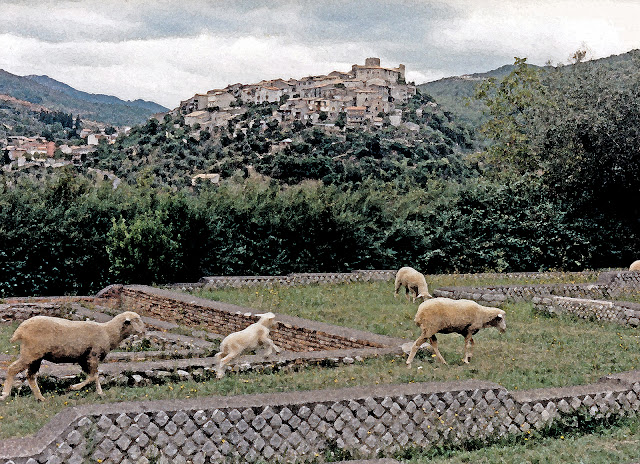