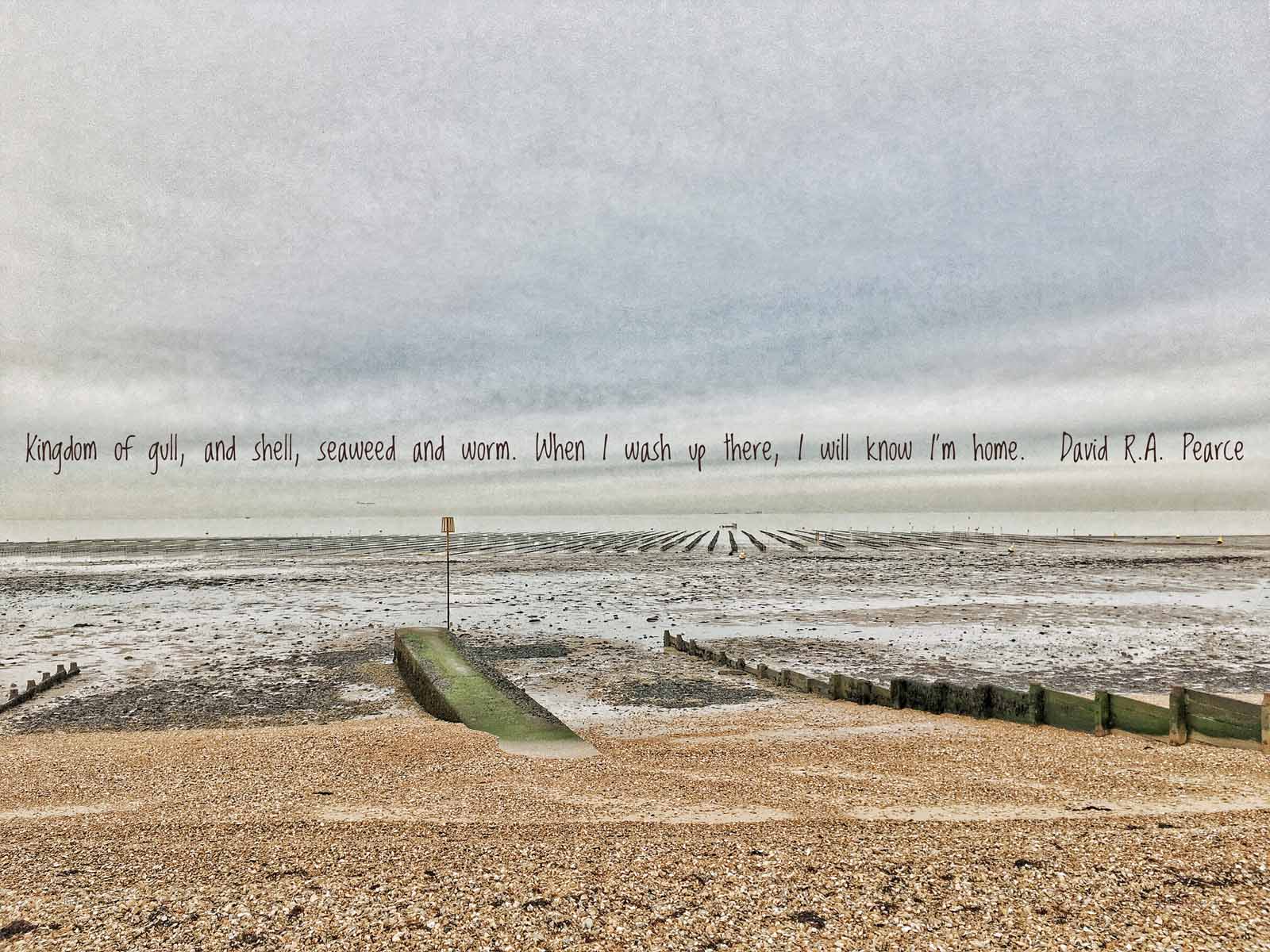 I am staying at the Palace Flop House, Whitstable.  Don't ask.  But, trust me, it's OK.

I could have been staying at the Premier Inn..... 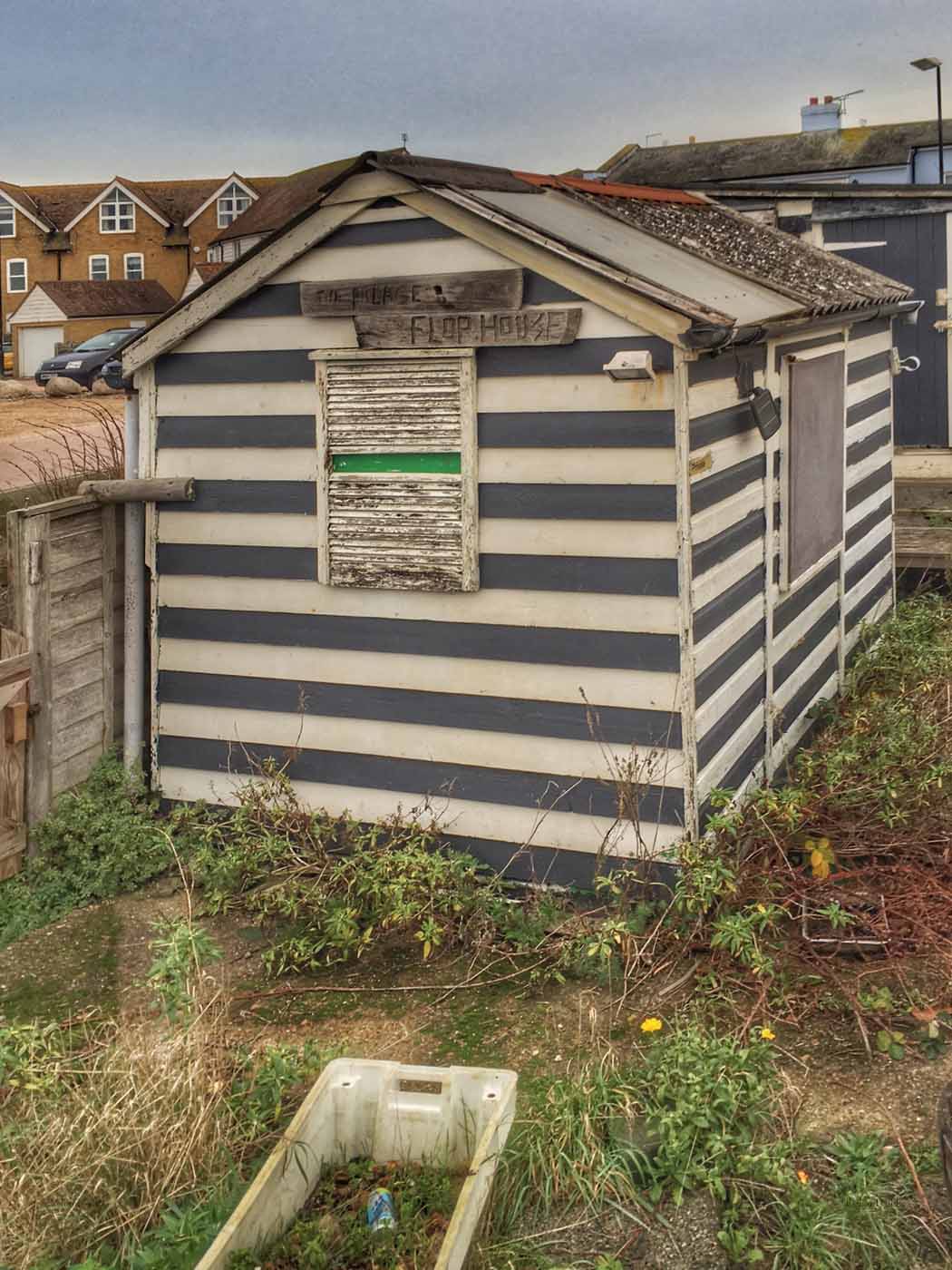 The Duke of Cumberland was full. 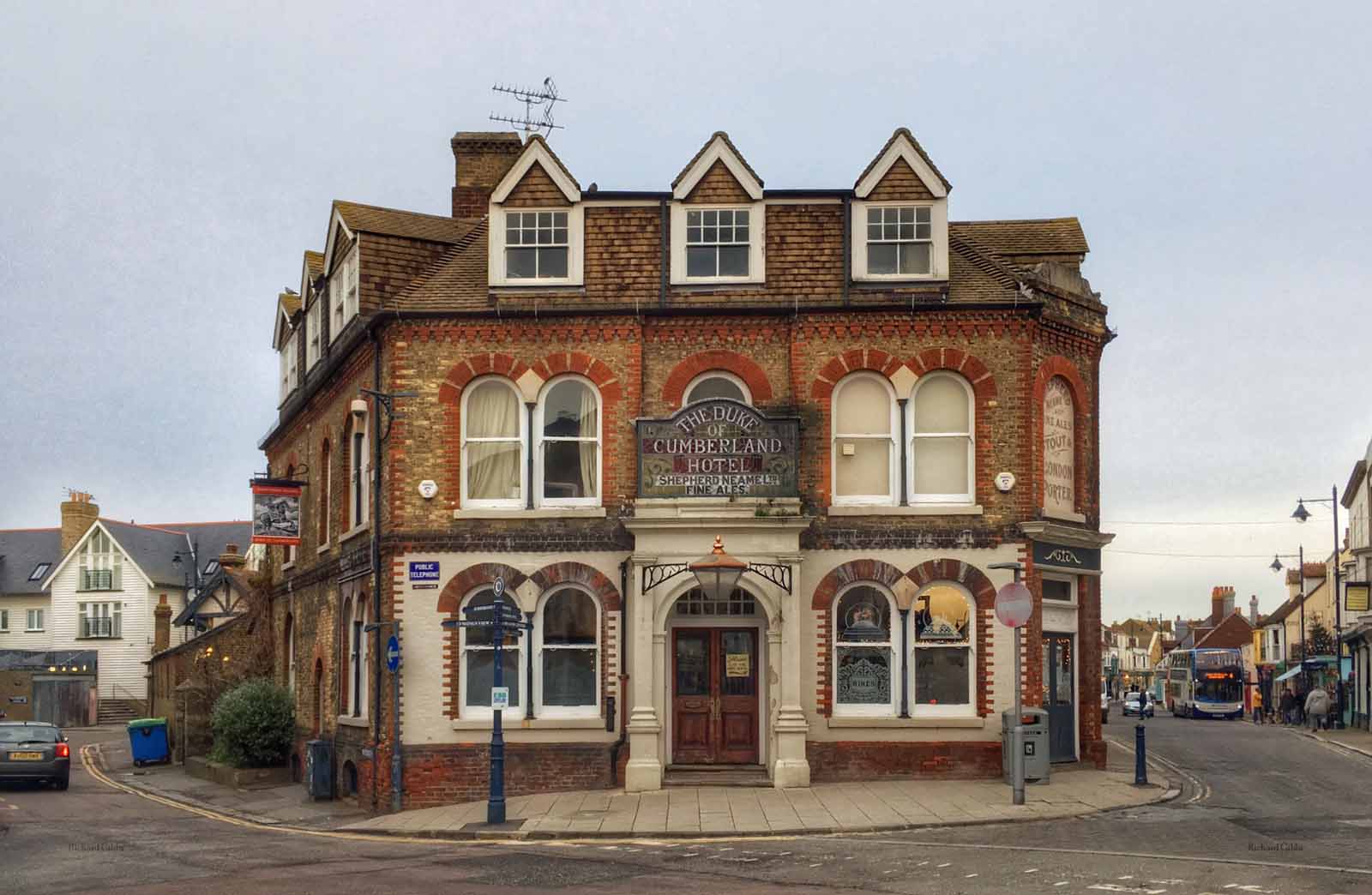 There's a touch of the Caribbean about Whitstable, 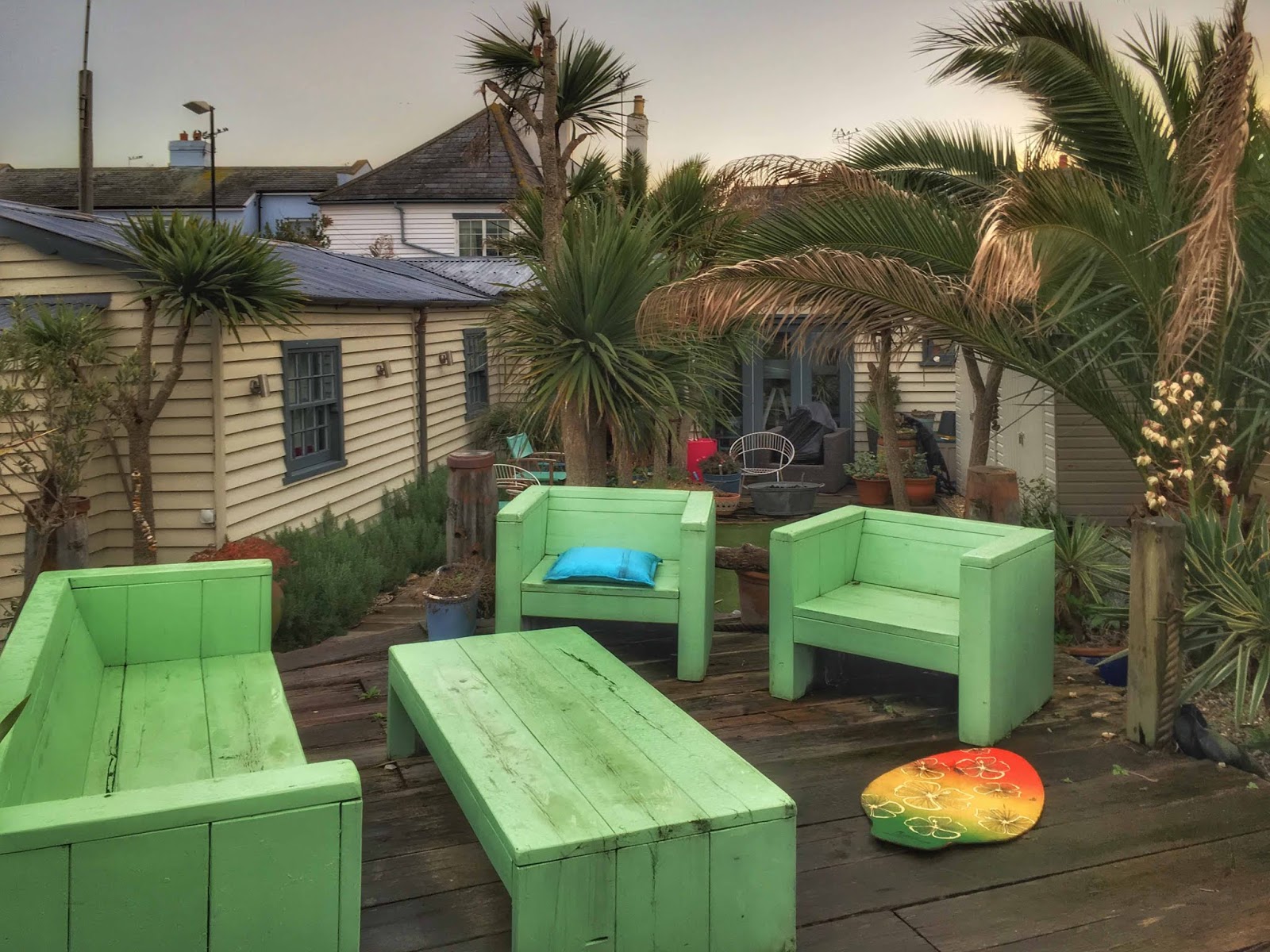 And there's a spooky, Dickensian fog about the place as well.  I am buzzed by paraplanes near the Old Neptune..... 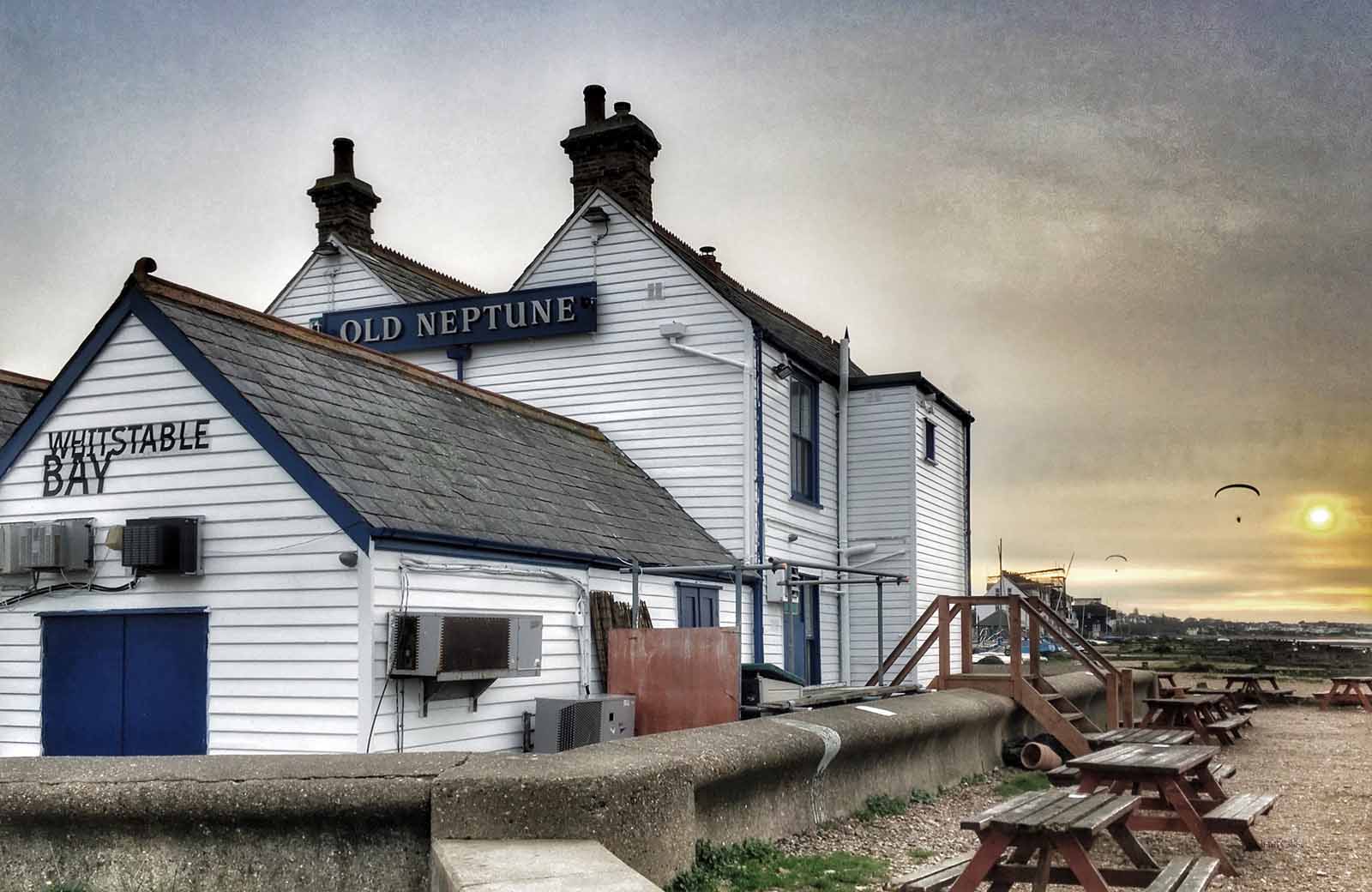 A pub that reeks of pitch and pine, not built for the flying age....

The machines rise, their motors sadly contrary to their imitations of the birds.... 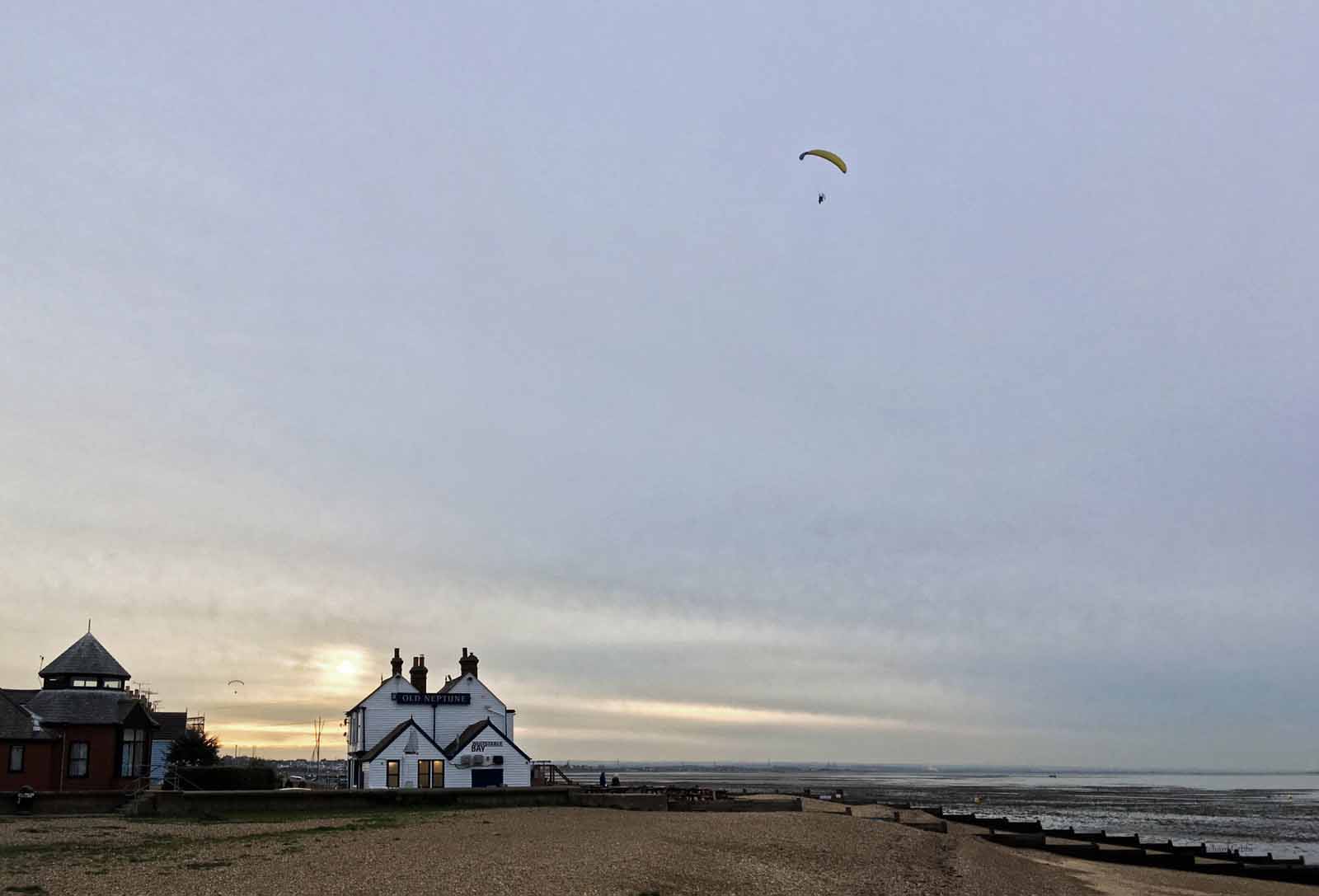 But they are almost the only things that move in this eerie dusk by the muddy shore. 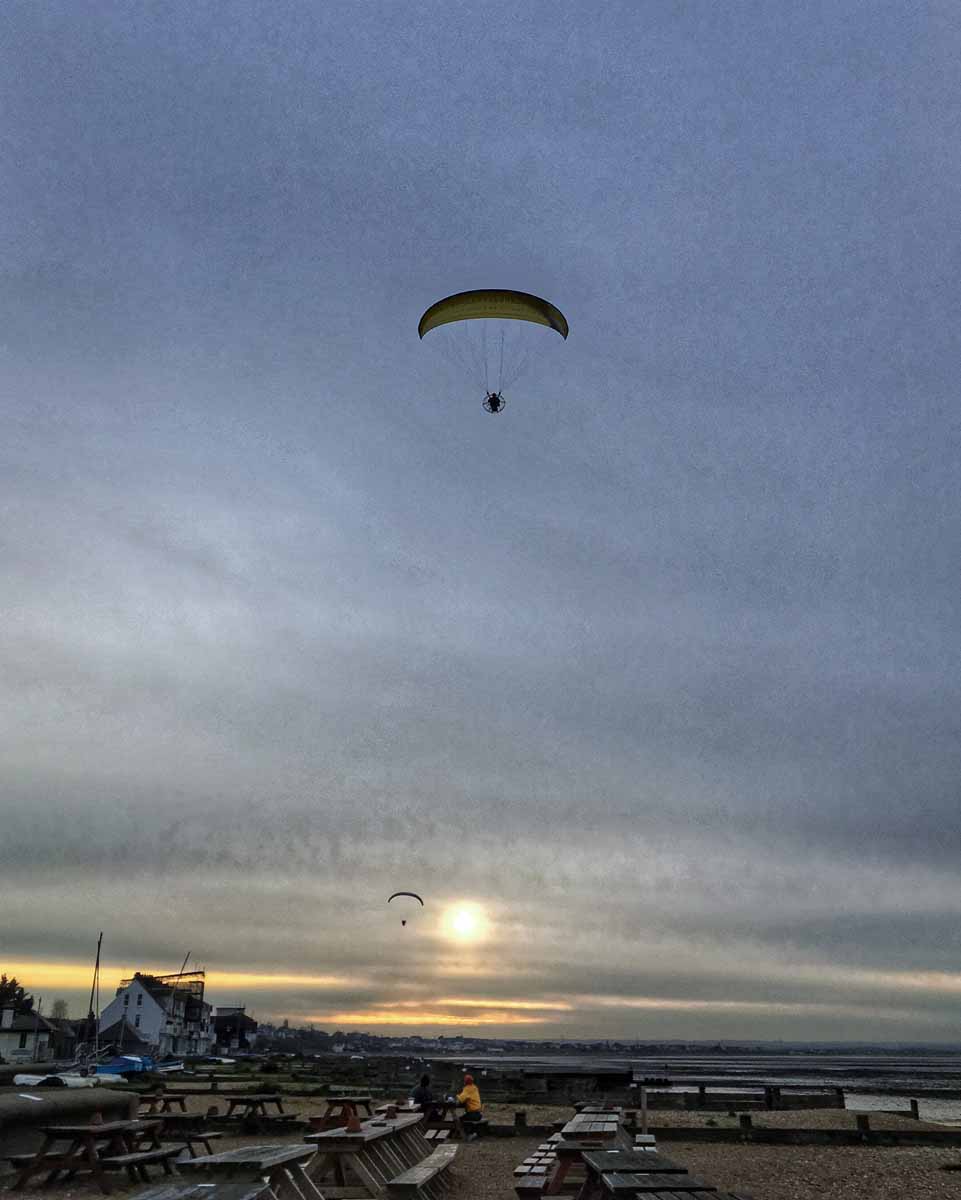 There are reasons to be in Whitstable.  One could be to pay tribute to Peter Cushing, famous for his appearances in various Frankenstein and Dracula films, (though possibly best remembered for repeatedly trying to get due payment from Morecambe and Wise) who lived here until his death in 1994. 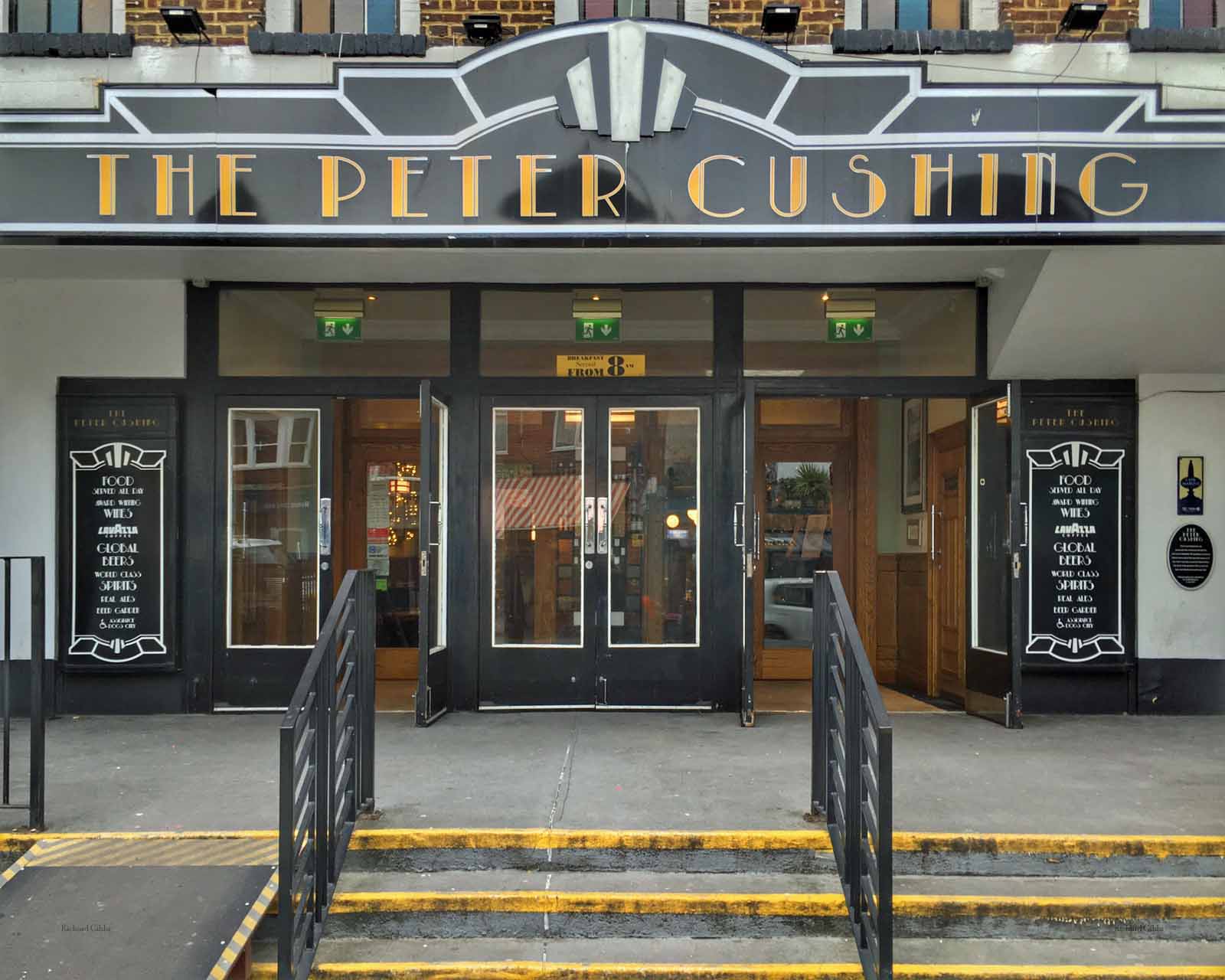 Another could be to indulge in the quintessence of the sea, by eating oysters.  A yellow tractor scurries about on the mudflats carrying baskets of the molluscs to the trucks on shore.  I watch, the salt spray mingling with my saliva.... 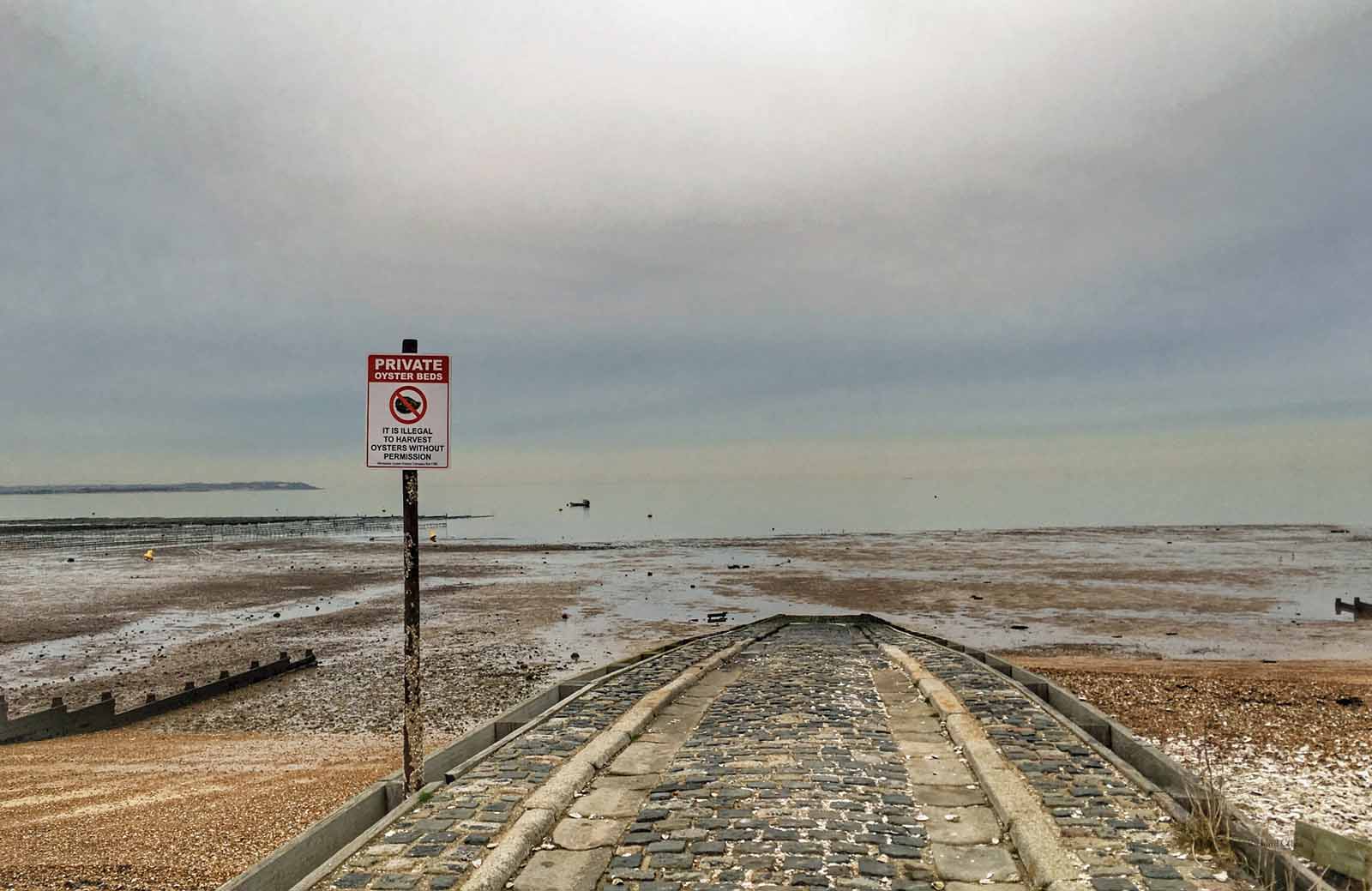 Sadly the Royal Native Oyster Stores, incorporated by the Royal Free Fishers and Dredgers in 1793, is closed, but I find Wee Willie Winkle busy at the shuck in his kitchen and a poem comes to mind:

"A loaf of bread," the Walrus said,


"Is what we chiefly need:


Pepper and vinegar besides


Are very good indeed—
Now if you're ready, Oysters dear,
We can begin to feed." 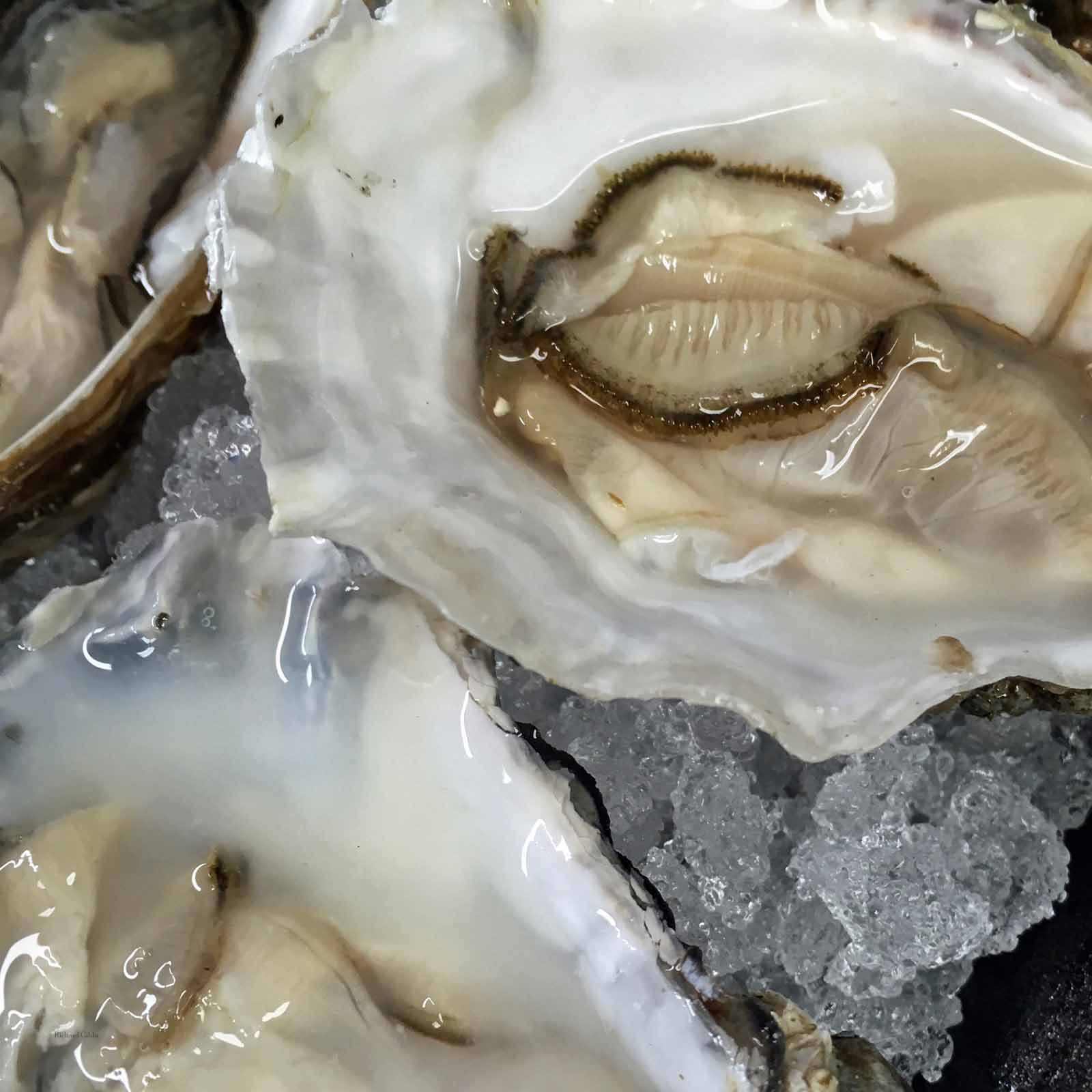 But what is this?  Here I am in Whitstable, and what do I consume? 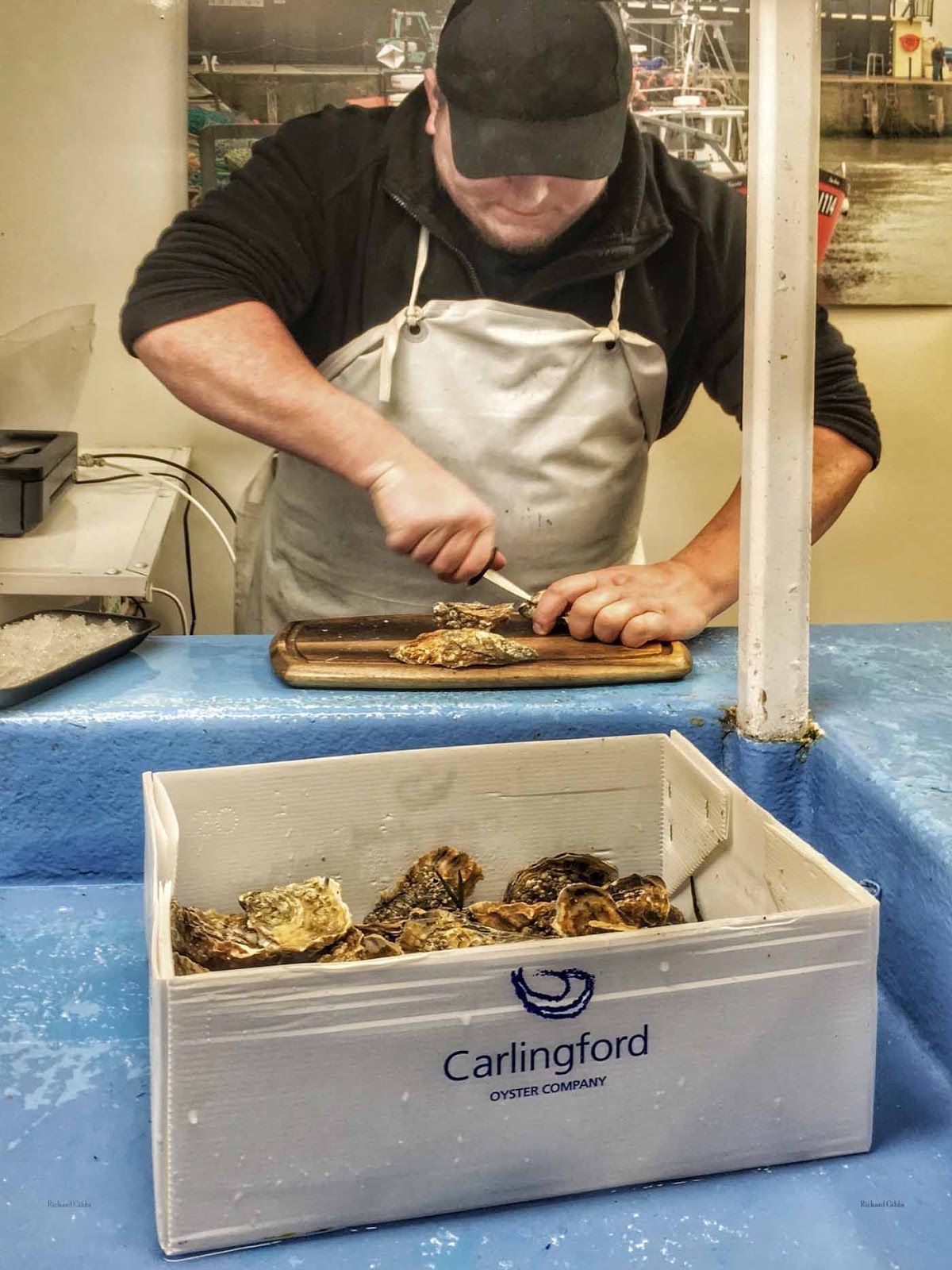 Aw, Shucks!  My filter-feeding bivalves have swum here from Carlingford!

(They are delicious though) 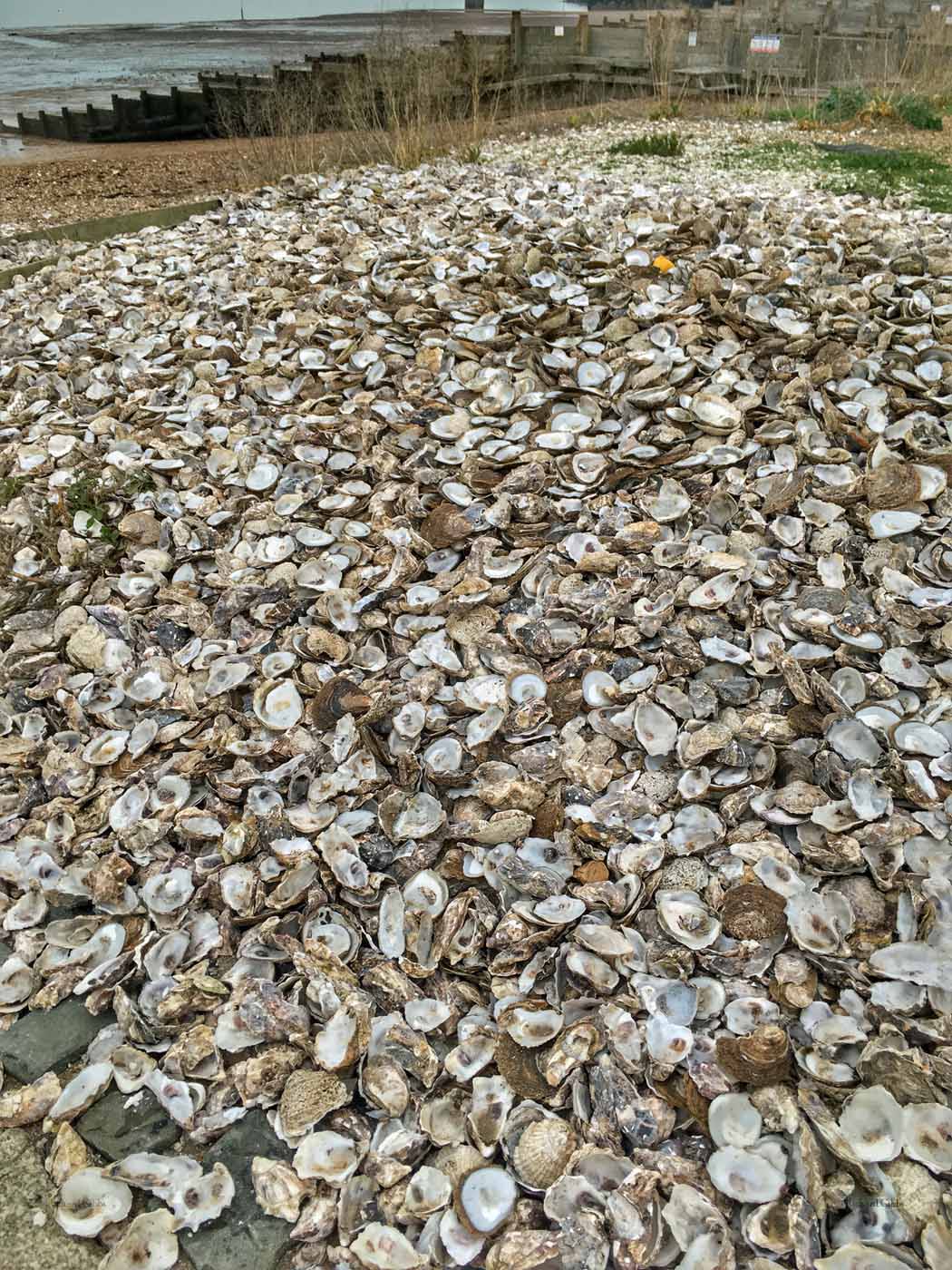 But I digress.  My true reason to be here is to pay homage to David Rodney Aubrey Pearce, (otherwise known as DRAP)  who for 33 years taught English at my school, so was, in part, through his early involvement in my love of literature, responsible for what I am becoming (though I hold no grudge!)

He died almost exactly two years ago, and, in belated homage, I have come to this modest seaside town clutching his wonderful book of poems, entitled The Street. 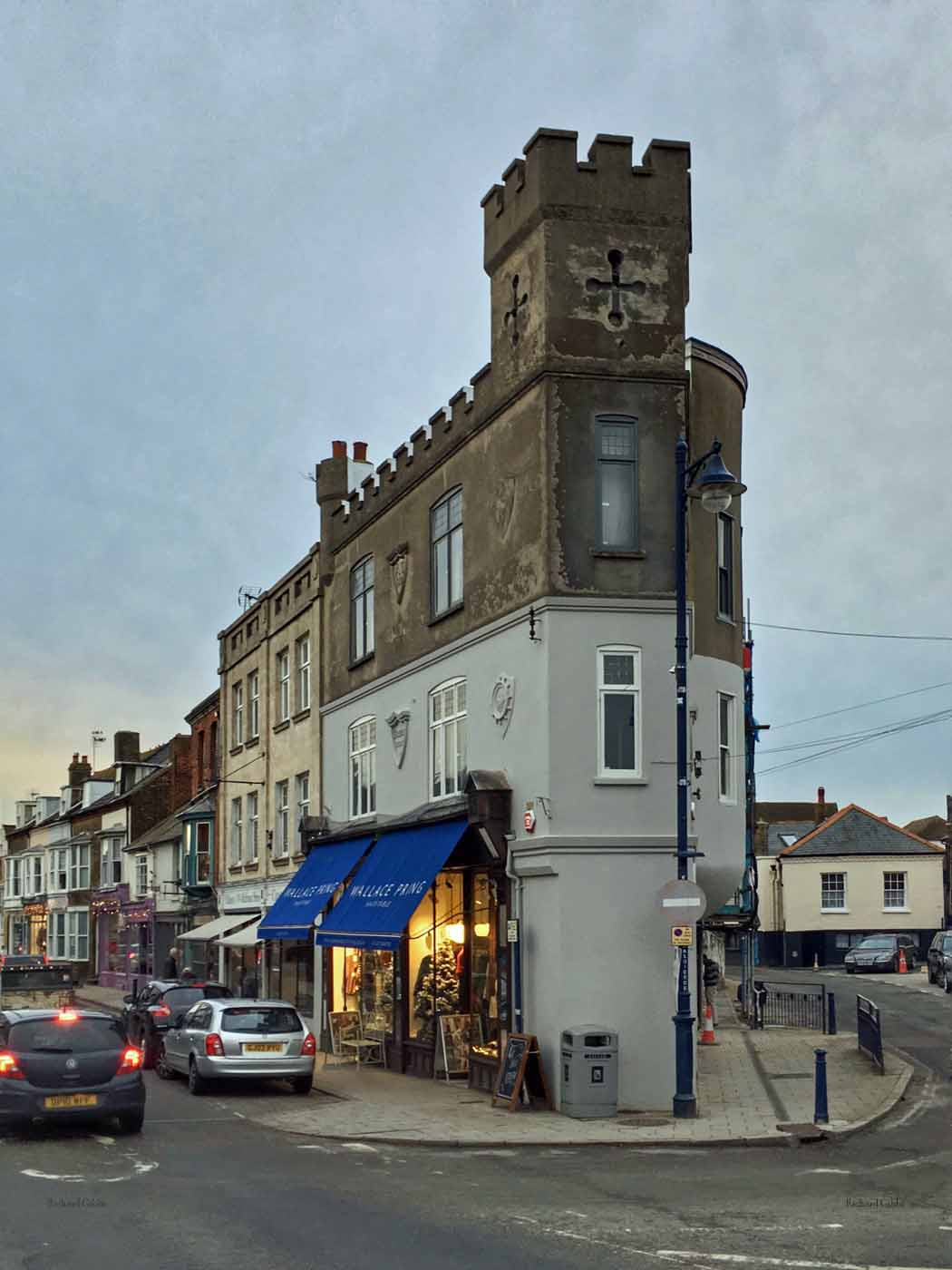 David was born in Whitstable, and would recognise much of its quirky geometry, and signs of the past.  His poems take their title from a narrow promontory of shingle, shell and pudding stone which stretches a mile or more out into the sea here, entirely submerged at high tide, but enticingly exposed at low water.

Sheppey's bluff across the bay
Is sharper in the evening ray,
While eastwards to Reculver towers
The stacked onset of darkness lours,
And lights around the estuary
Half ring my patch of open sea.
Nor light, nor dark, nor sea, nor land:
Between uncertain worlds I stand.
One day, not now, I may not hide
From Time's encroaching, Night and Tide. 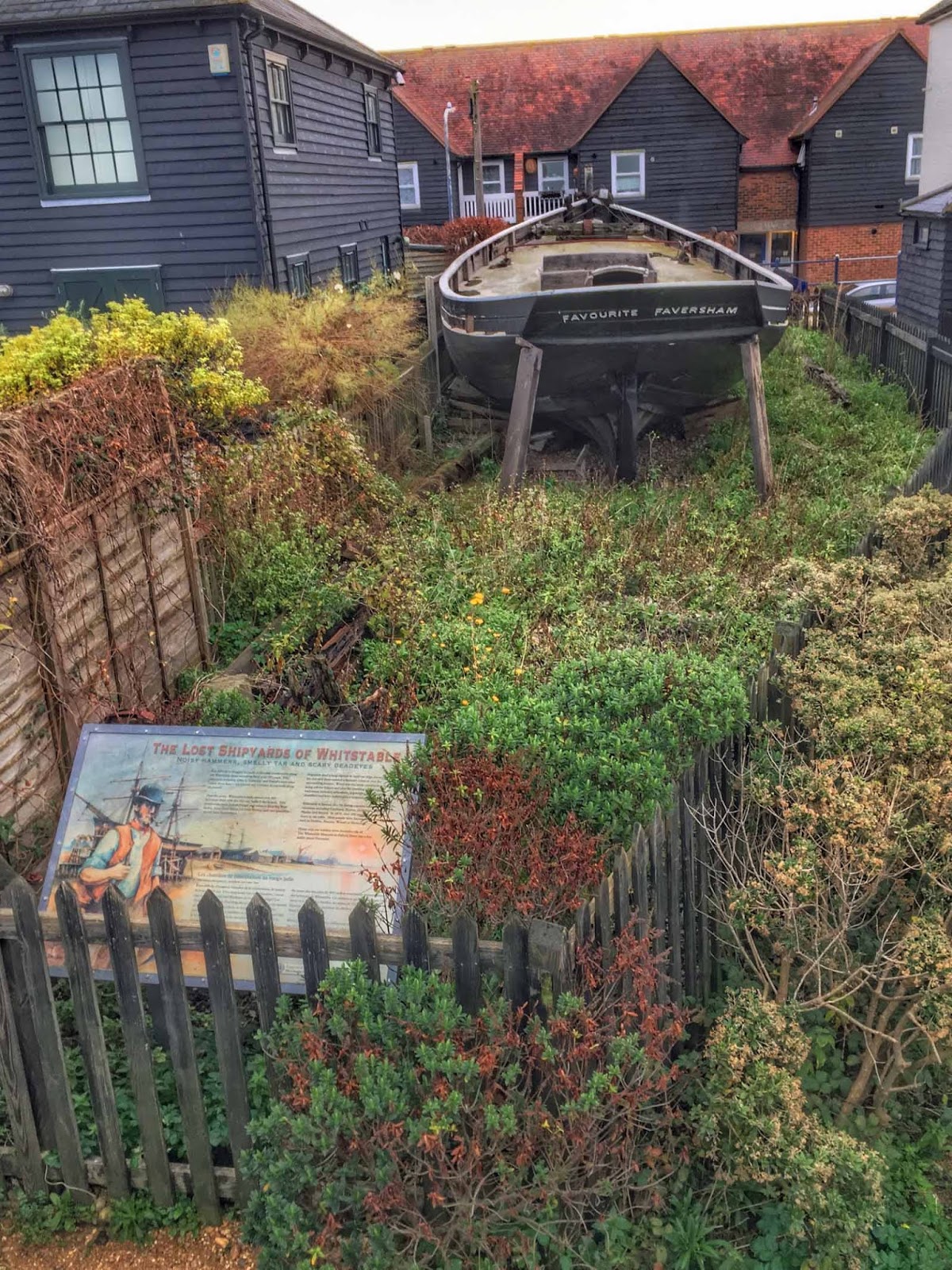 David was not only my teacher.  He was a friend, and a very good friend of my parents too.  He was also, in later years, a joint founder of the Graham Greene Birthplace Trust, which now enables an annual Greene-fest in Berkhamsted.  One of the last times I saw David was at a rare showing, at one of these festivals, of Dr Fischer of Geneva  (1984) a tv film of one of Greene's stories, starring James Mason, Alan Bates and Greta Scacchi.  Greta, in person, was with us at the screening, and it took an immense presence of mind for David to elude the sinuous advances of the diva.....

I don't think I could have resisted..... 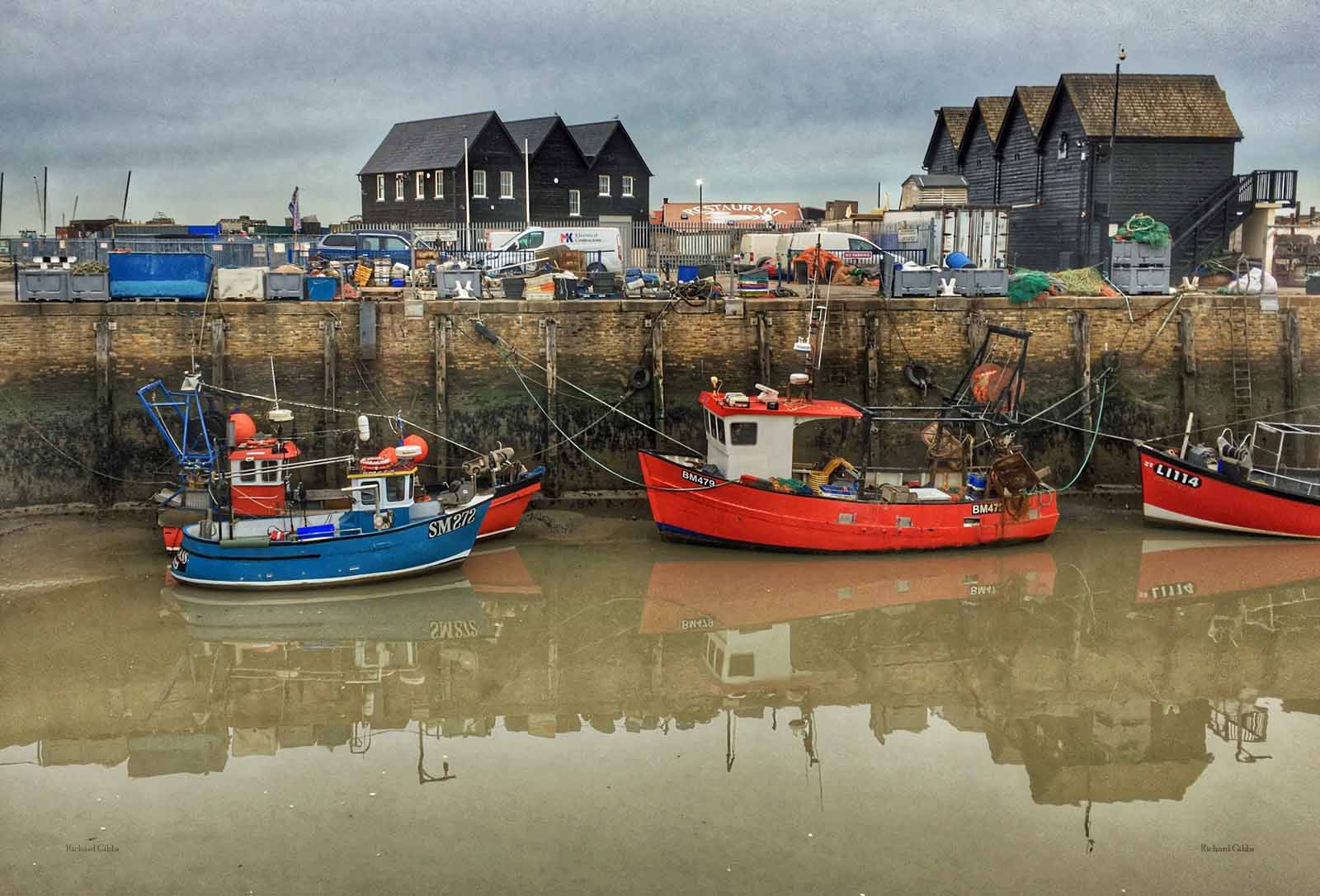 Pocked limpet rocks and puddingstone; concrete
Debris of the 'Invasion' scare; starfish
Stiff orange-fingered in the shallow wash -
Are my boyhood remembrance of 'The Street',
Which at low tide thumbs our a mile to meet
The sunsets firing over Sheppey hills..... 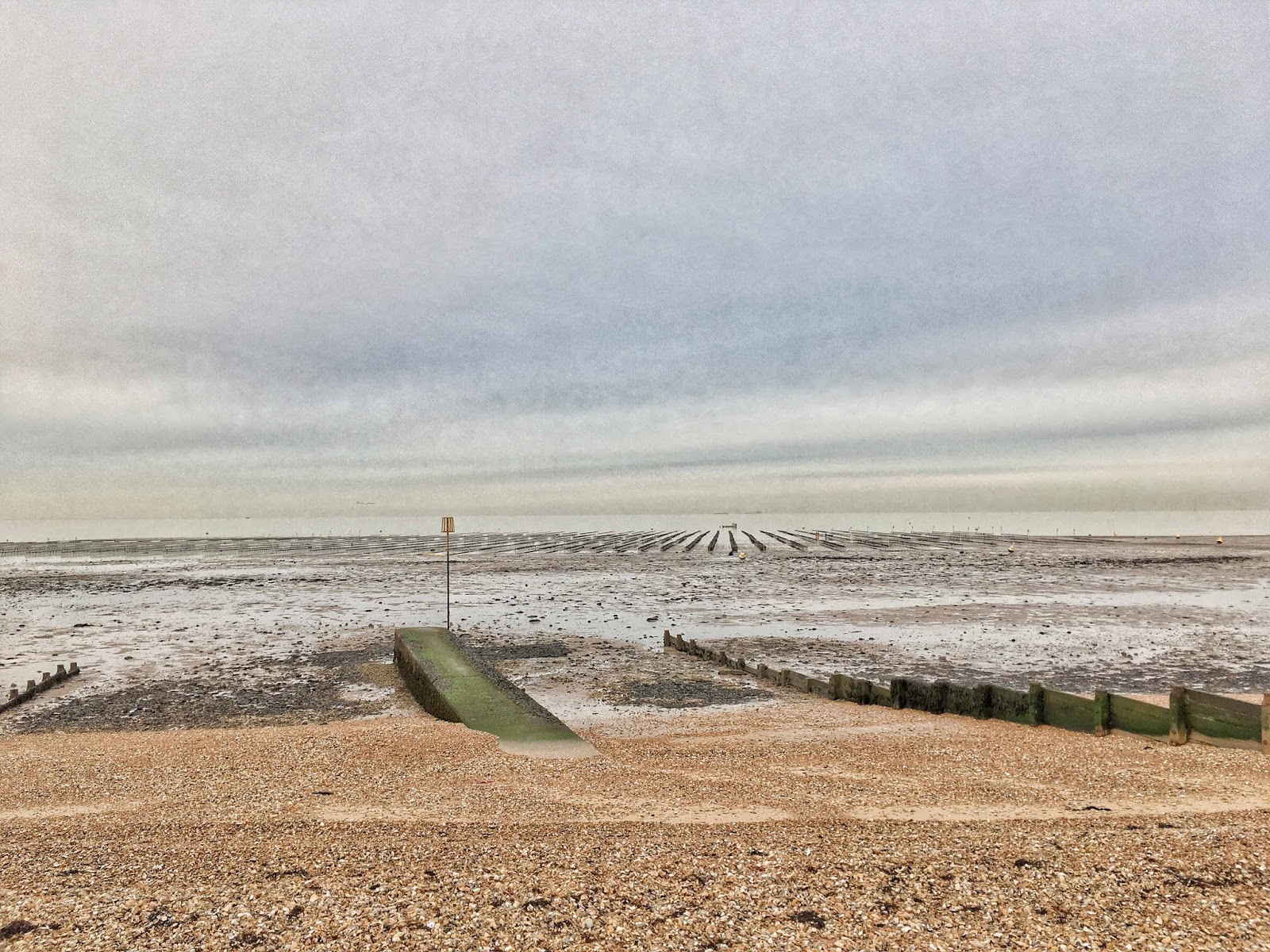 In the morning it is time for quiet contemplation and prayer, and I find myself seated in the chapel of St Edmund's School, Canterbury, just up the hill from Whitstable.  Here, just after the second world war, David was a pupil.  We stand to sing an advent hymn, and I hear his voice beside me:


O come, Thou Dayspring, from on high,
And cheer us by Thy drawing nigh;
Disperse the gloomy clouds of night,
And death's dark shadows put to flight. 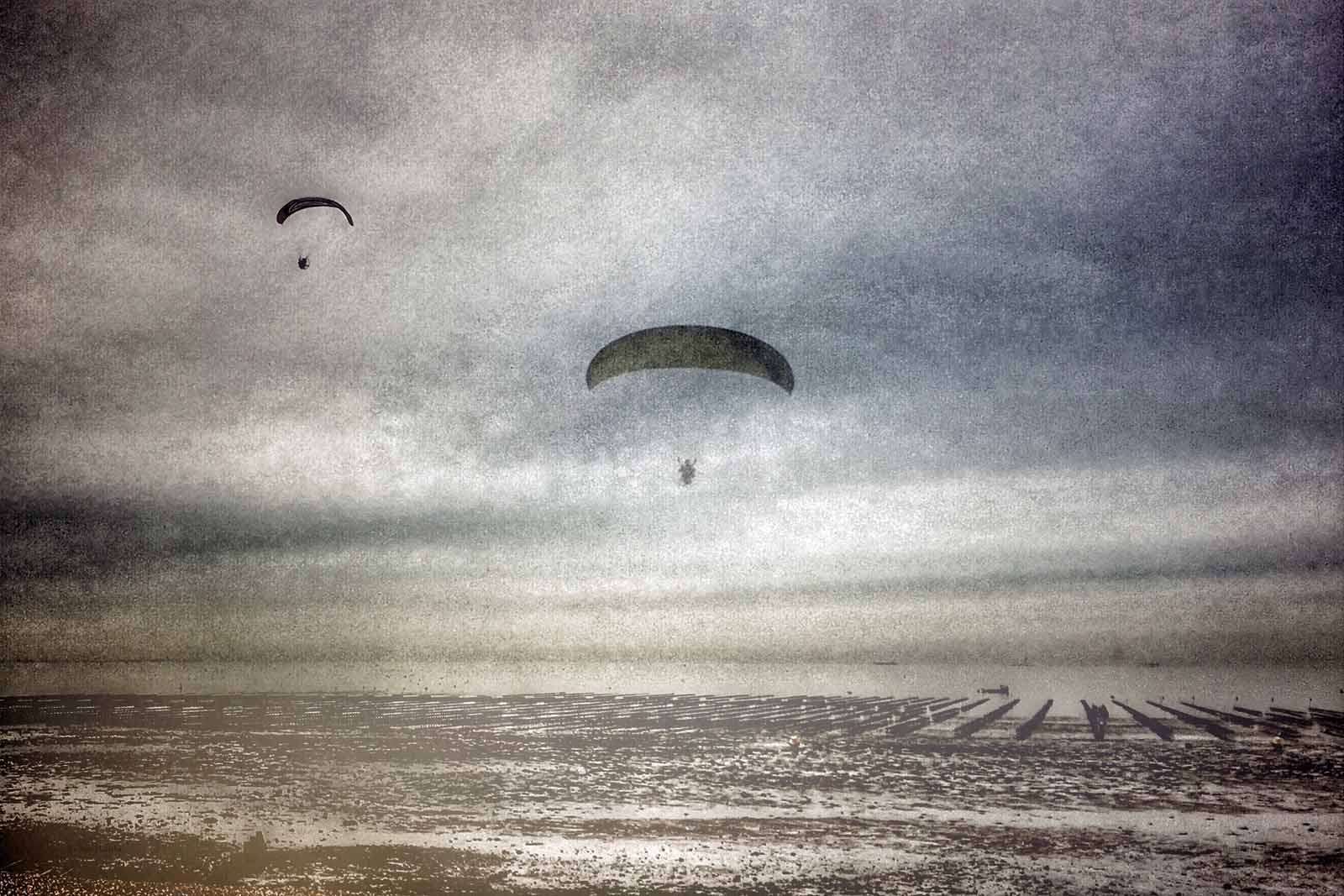