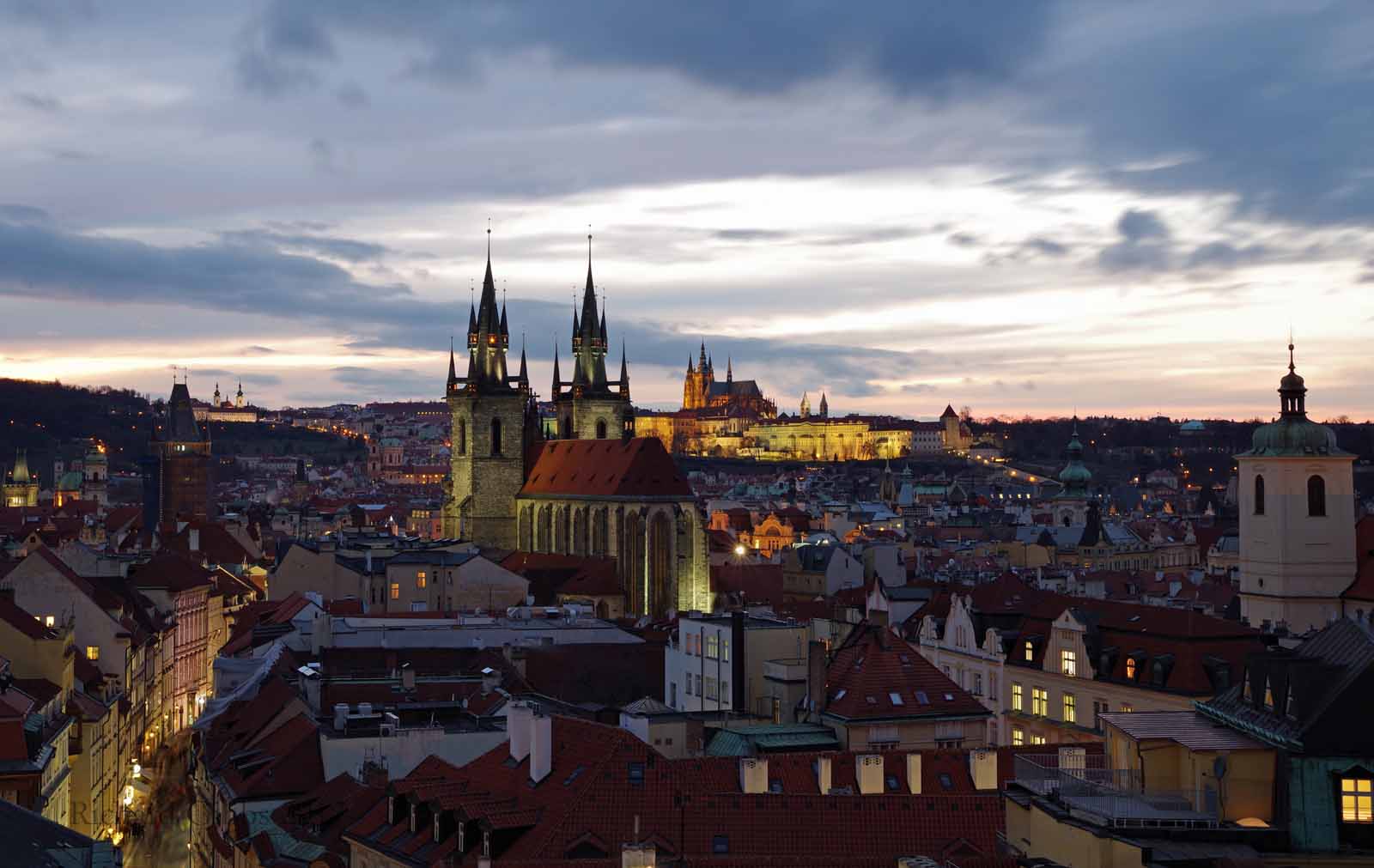 Our street is all snow and ice.  Unseasonable winter weather.  For the time of year.  We skid the car out and skate downhill at four a.m., gingerly making it to Heathrow, heading for the fridge of Eastern Europe.


Prague.  Winter.  Whatever possessed me to think this was wise?  But we are presently surprised.  It’s chilly, but dry.  Not a snowflake in sight, not an icicle to behold.  Cloudy but charmingly bearable.  And so: Christmas markets, chimney cake and punch, baubled trees and little pens of sheep and donkeys.  The very essence of kitsch, but the absolute lie to Wenceslas  - nothing at all deep or crisp or even. 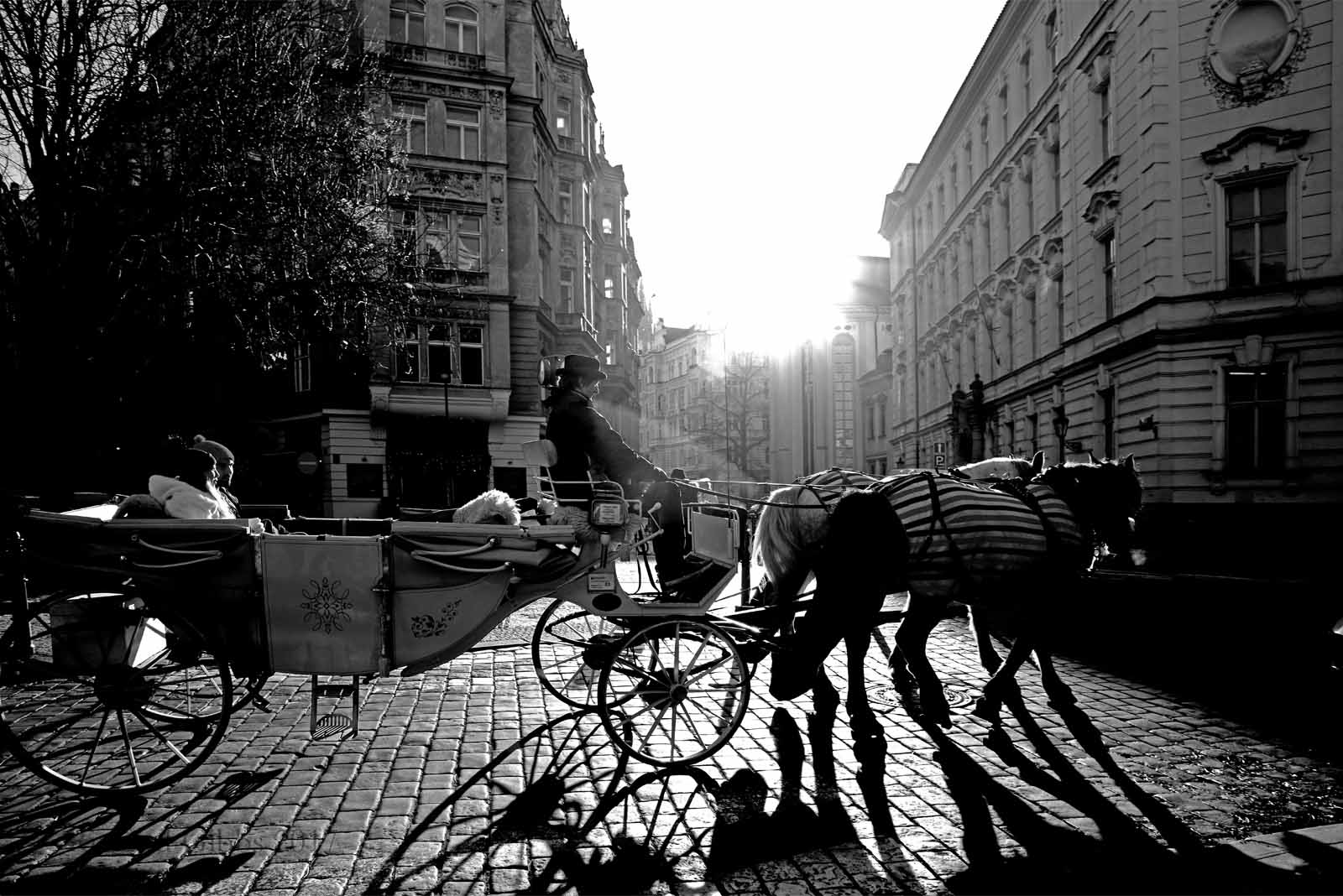 Our Hotel - Art Deco ceramic dining room, slivers of walnut walling the lift – warmly welcomes us.  Old Town Square is filled with cheer; Charles Bridge thronged with tourists, like us, bleary with travel, unconscious of history.  The Castle, St Vitus dancing at the summit, that vast complex of styles and masonry that slips down to the Vltava as if it were marzipan that had not quite set. The Castle, a chess piece in the Czech story, capable of nothing but straight moves, either black or white.


I was in Scotland in August 1968 at the time of the Soviet invasion.  I had no idea what was going on, though I remember being shocked.  Black and white television images of tanks were scary, and the very word invasion had connotations with so many of the bad things I had heard about in history.  It was shocking too because this invasion crushed the flowers that had begun to grow so hopefully in what is known as the Prague Spring.  Coming so soon after the Parisian barricades and the student activities of Daniel Cohn-Bendit and others, it seemed as if the world was suddenly a repressive place.  The world of peace and love was in jeopardy.  Not for nothing (perhaps?) did the Beatles release Revolution that month.

And then, as interest in Prague declined with the end of the summer, autumn dissolved into winter.  A strange sense of darkness enveloped me as I returned to Scotland after Christmas, into almost perpetual night, until, on January 16th, 1969, 20 year old history student Jan Palach set his petrol soaked self alight on Wenceslas Square to wake us all from our slumber.

His painful death still disturbs me.  And yet it was another twenty years before the country emerged from the communist grime with the Velvet Revolution. 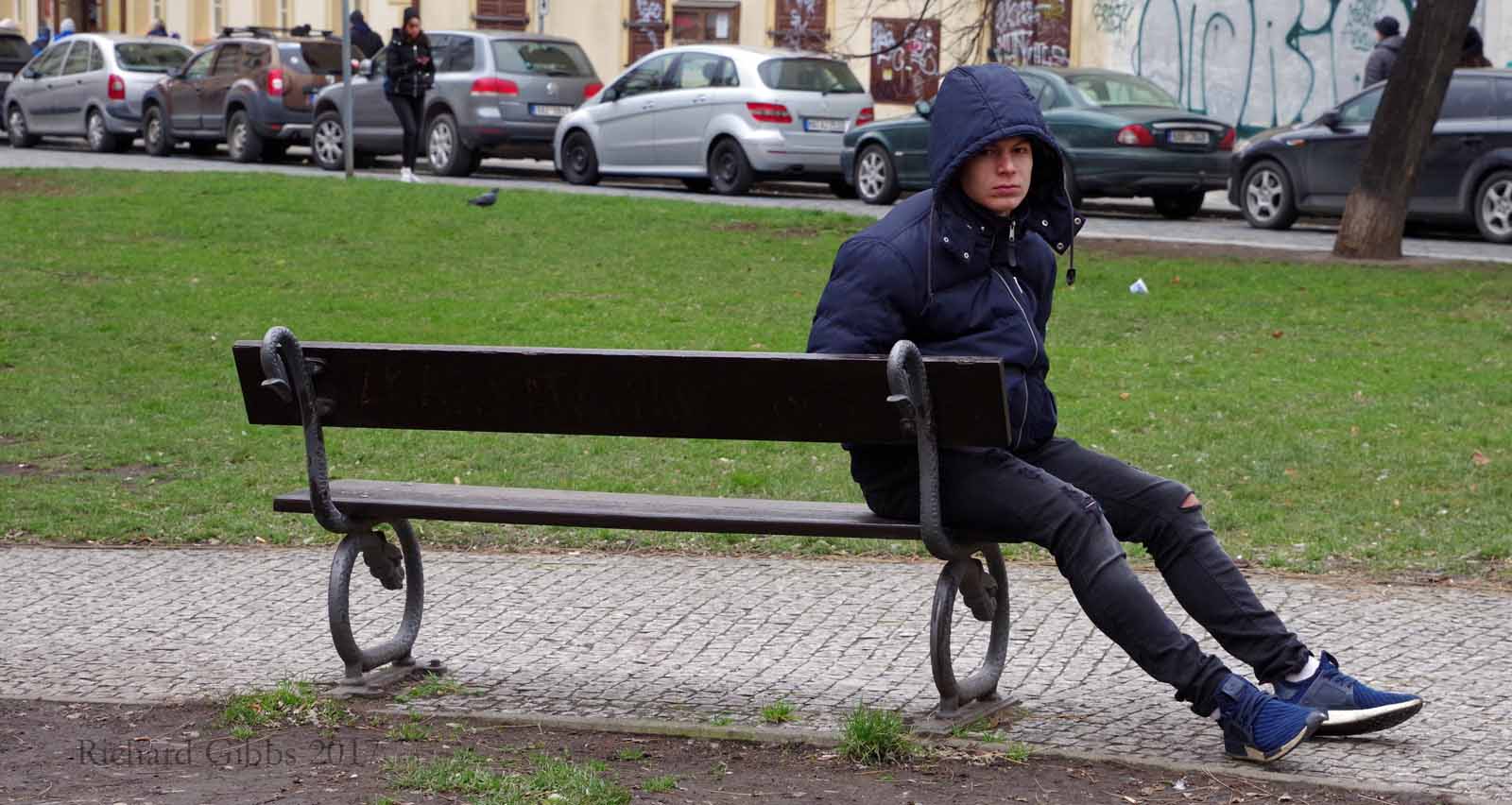 From Jan Hus to Vaclav Havel, the story of Prague and what is now known as Czechia, or the Czech Republic, is complex and bloodstained.  Shakespeare’s The Winter’s Tale takes place in this imagined Bohemia.  Under the Austrian Hapsburgs it wasn’t happy, with the German language imposed on its indigenous culture.  As Czechoslovakia there was an uneasy mix until the Nazis bludgeoned it into submission.  After that war it was miserably subsumed into the Soviet Bloc, before the famous Spring, and the Winter of Discontent.

Now, as the year turns, we hear of a new Prime Minister, right wing billionaire Andrej Babiš (mini Trump to his supporters?)  A new Spring?

We’ll see.  As Jakub Patočka wrote in The Guardian in October: The best the country can realistically hope for is a kind of chaos. The worse, but very likely, possibility, is an emergence of an authoritarian regime managed by a ruthless oligarch supported by neo-fascists or whoever is willing to sell him their votes. Almost 30 years after the Velvet Revolution, democracy is in danger. 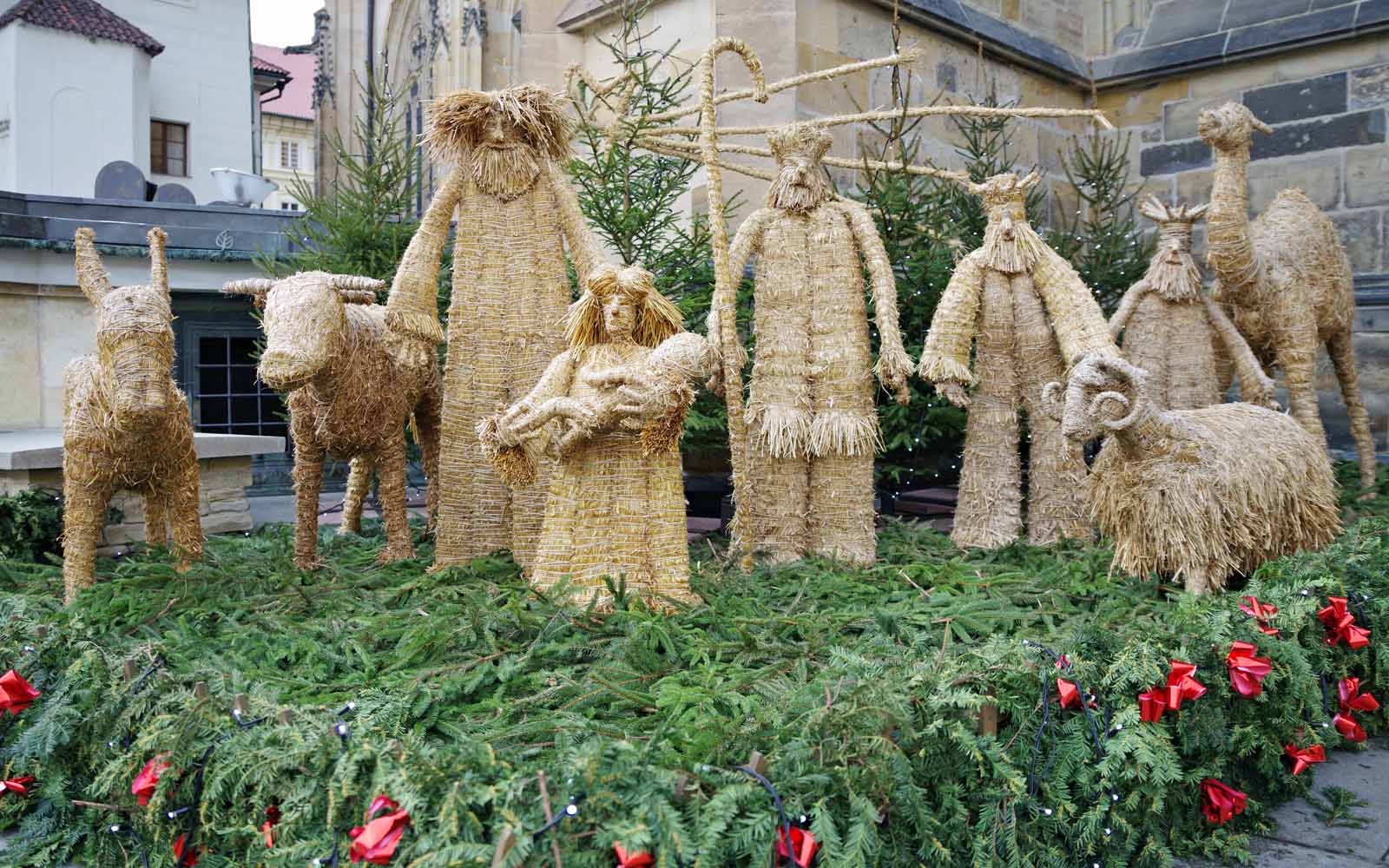 Plus ça change…. In the meantime, our brief holiday was a delight.  We were tourists.  Ignorant, uncaring, rested, well-fed and away from the snow on the M25…..  On the third day the sun shone and the river sparkled under the medieval bridge.

Almost Spring-like.  A fitting advertisement for our friend Simon Mawer’s new novel, Prague Spring, due out on August 2nd, 2018. As the pre-release blurb on Amazon has it: It's the summer of 1968, the year of love and hate, of Prague Spring and Cold War winter….. a first secretary at the British embassy in Prague is observing developments in the country with a mixture of diplomatic cynicism and a young man's passion. In the company of Czech student, Lenka Konecková, he finds a way into the world of Czechoslovak youth, its hopes and its ideas.
For more Mawer, please see
http://www.unitedagents.co.uk/simon-mawer 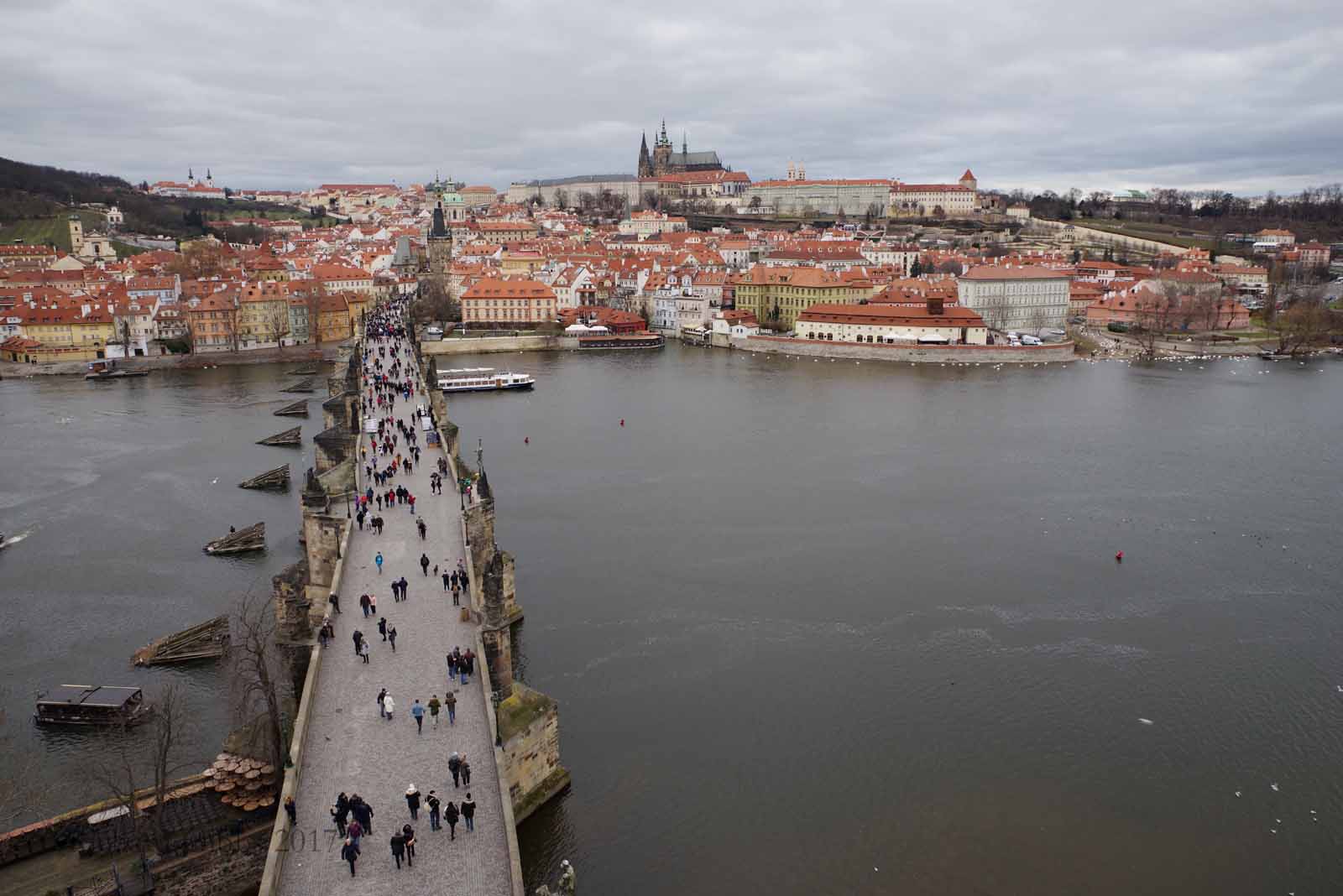 It is worth considering a Prague City Card if you wish to explore: https://www.praguecard.com/index.php?lang=en

There are so many places to eat and drink that it is fine to wander and take your pick, but we enjoyed the relative peace of the centrally located Pizzeria Café Bar "U Budovce" at Týnská 7, budovecjazz@email.cz

For more pictures from this trip, see: http://www.richardpgibbs.org/p/prague-1.html