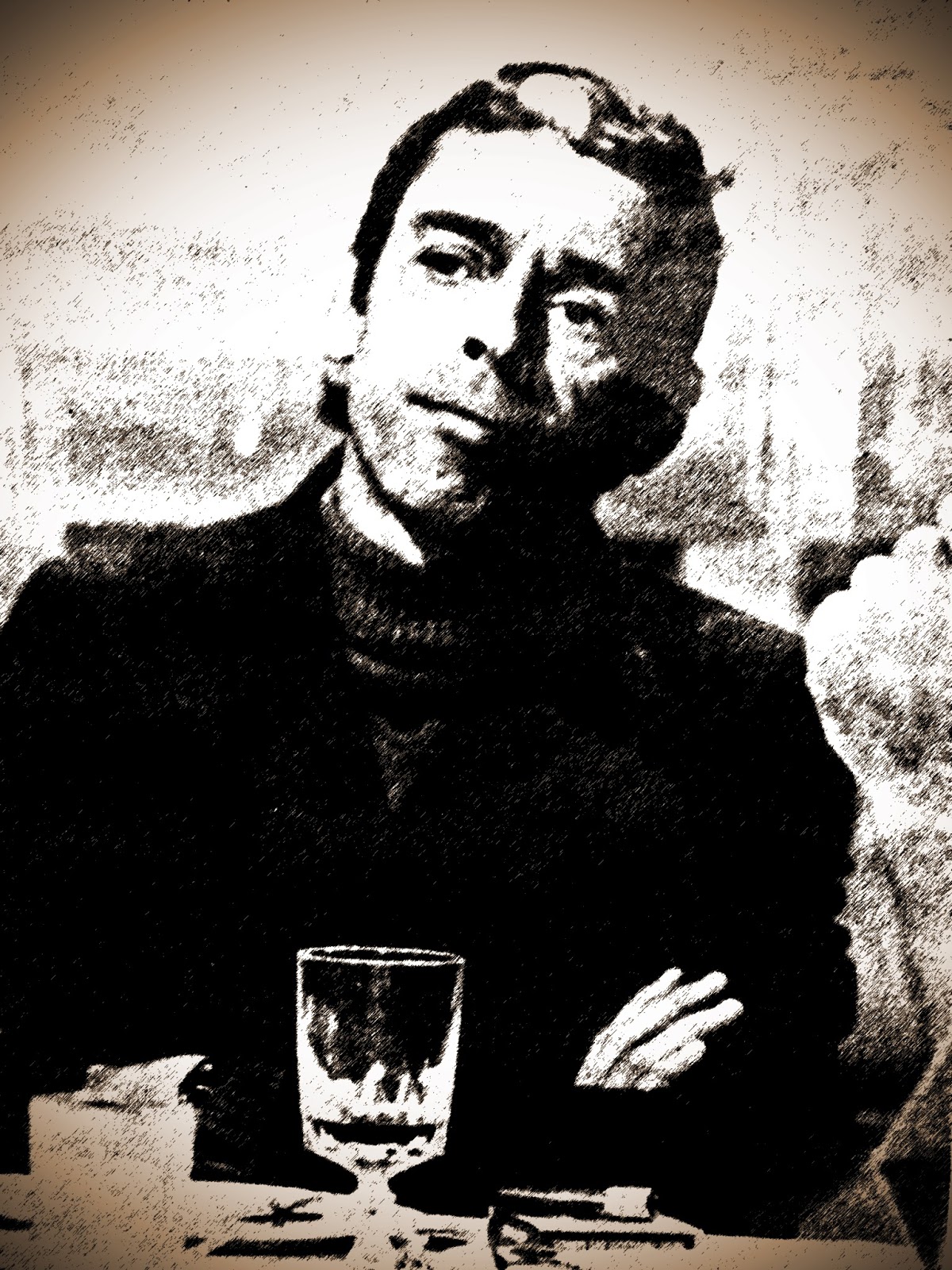 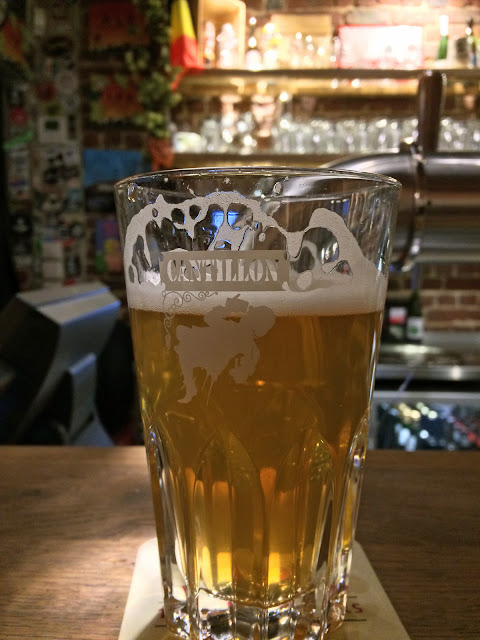 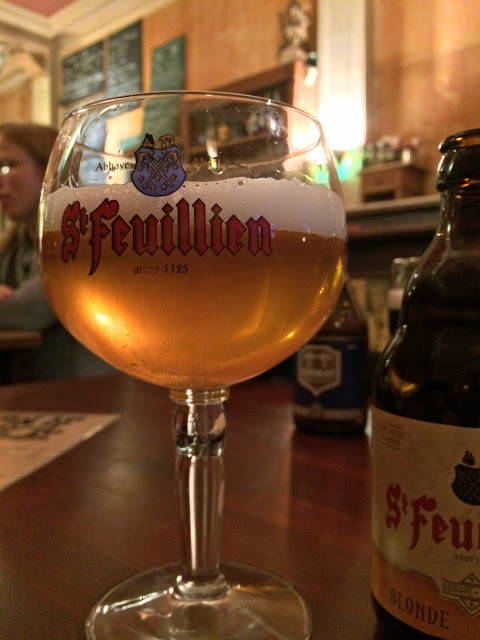 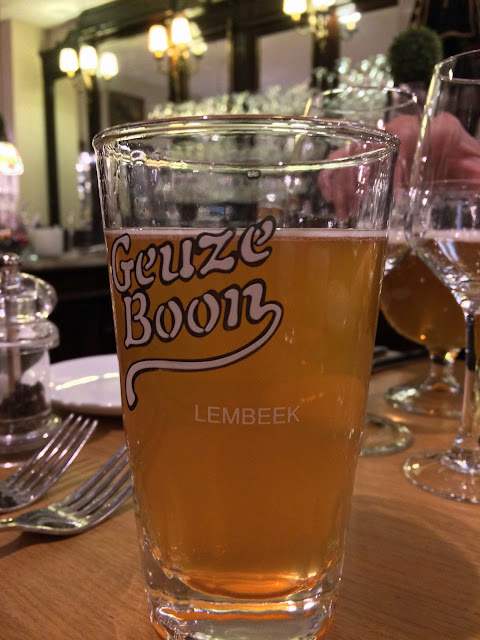 Jacques Brel was only 49 when he died in 1978, but his wonderful songs remain.  He was an extraordinary performer, with intense feeling and perfect enunciation, and his lyrics have influenced many other artists, such as David Bowie and Leonard Cohen.  A favourite is La bière.... 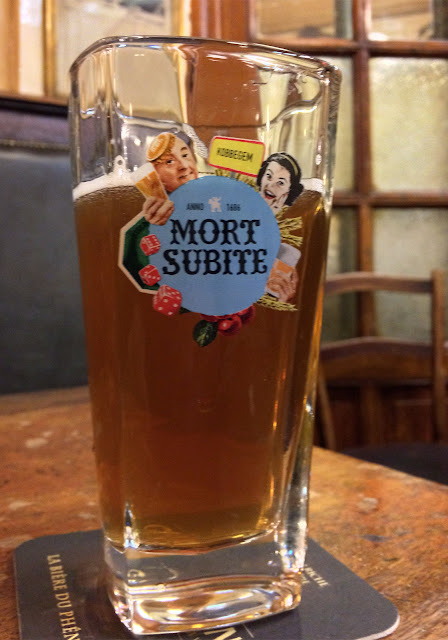 I have been in , wandering from to the , via Liège, carrying these words in my wallet, and sampling some of the finest beers in the world.  I can smell beer, God!  It’s so good!  There’s the scent of beer – give me your hand! 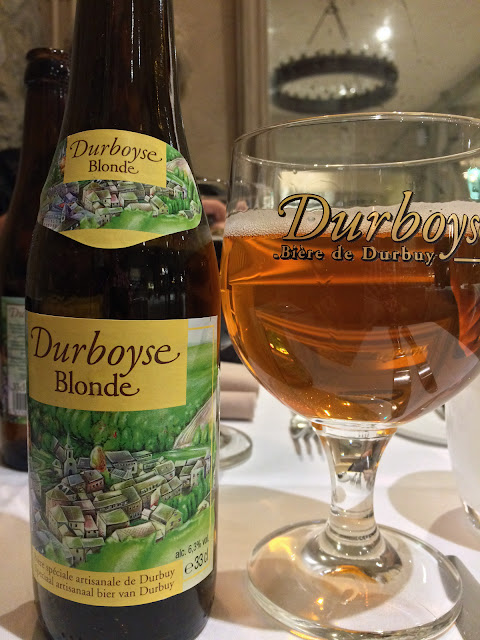 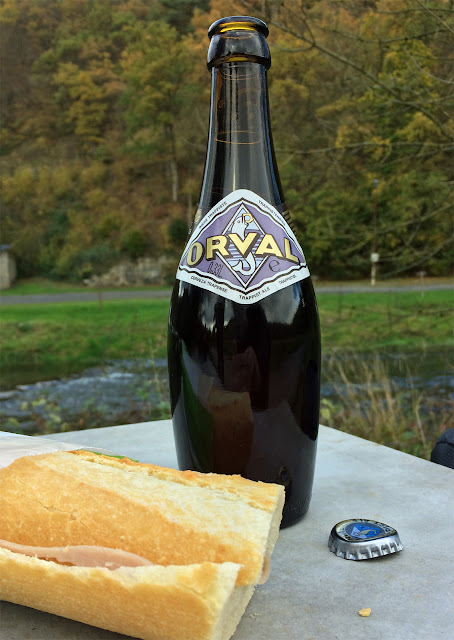 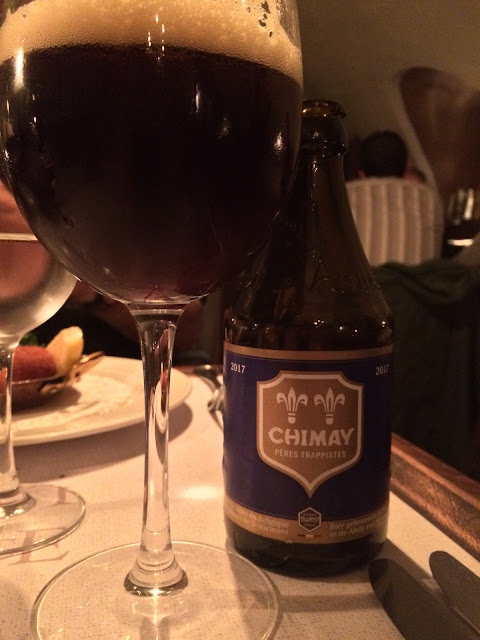 Belgian beer is justly famous.  There are hundreds of varieties (some say 450), ranging from the standard draft lagers such as Maes, Jupiter and Stella Artois, through winey Lambic Cantillon, cherry flavoured Mort Subite Kriek Lambic Tradition and spicey, candy sweetened Faro, to the highly sophisticated unfiltered complexities of Trappist beers such as the 6.2 abv Orval (completed with a secondary fermentation using brettanomyces yeasts) and world champion (and very rare) Westvleteren 8.0º…..  And each beer has its specific glass.... 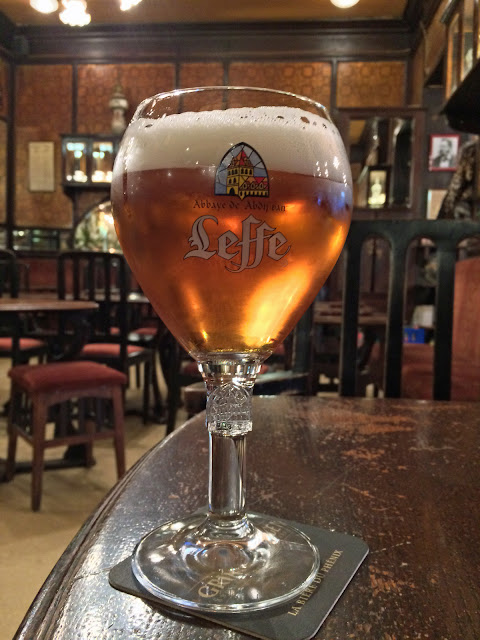 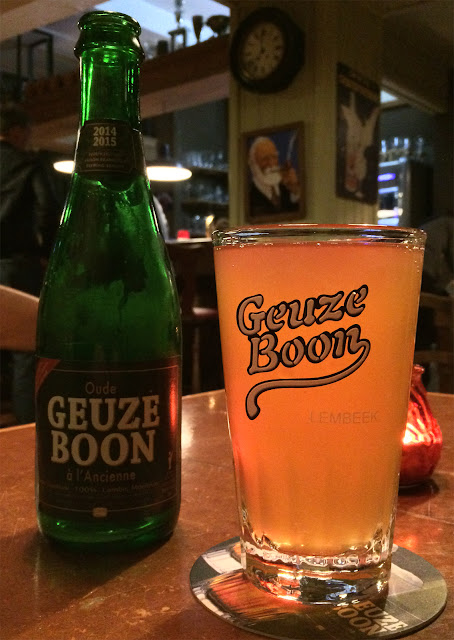 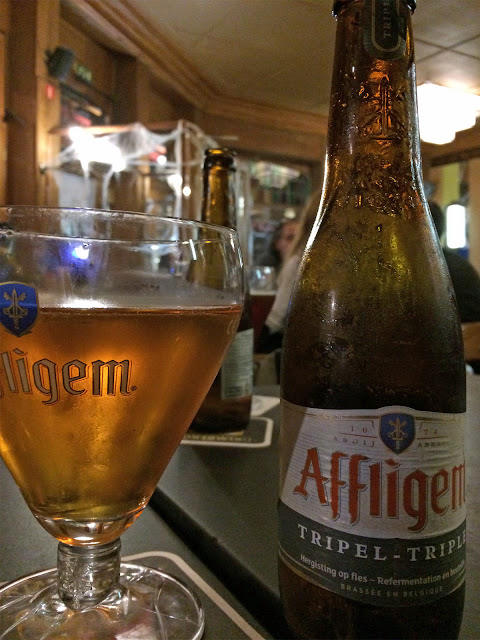 The characteristics of Belgian beers are many and various, but they fall into categories, of sorts.  Lambic beers, which come from the Brussels region mix at least thirty per cent raw wheat with malted barley, but are then fermented and matured in wooden casks using wild yeasts which give the beers a distinctive winey sourness, sometimes likened to a mixture of scrumpy and sherry.  Some of the best Lambics are produced in the Anderlecht area of by the Cantillon brewery.  A more sparkling version of Lambic is known as Gueuze which is a blend of young and mature Lambics.  Faro is a Lambic beer sweetened with dark sugars. 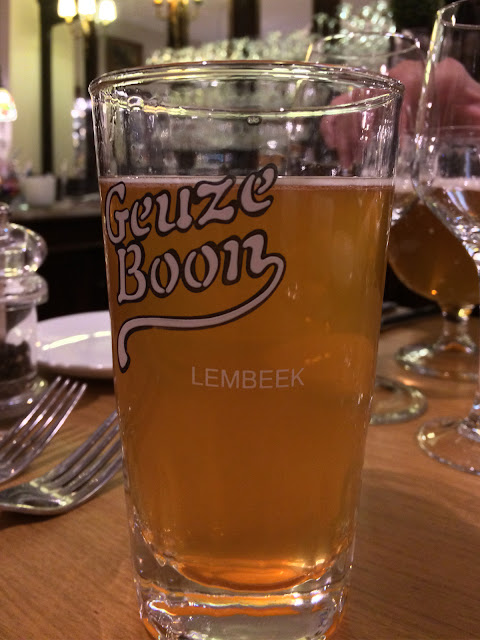 Kriek is Lambic which has been flavoured in later fermentation with small local cherries. 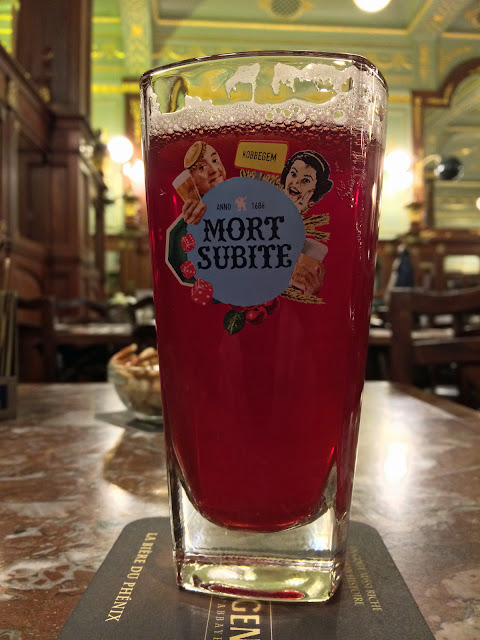 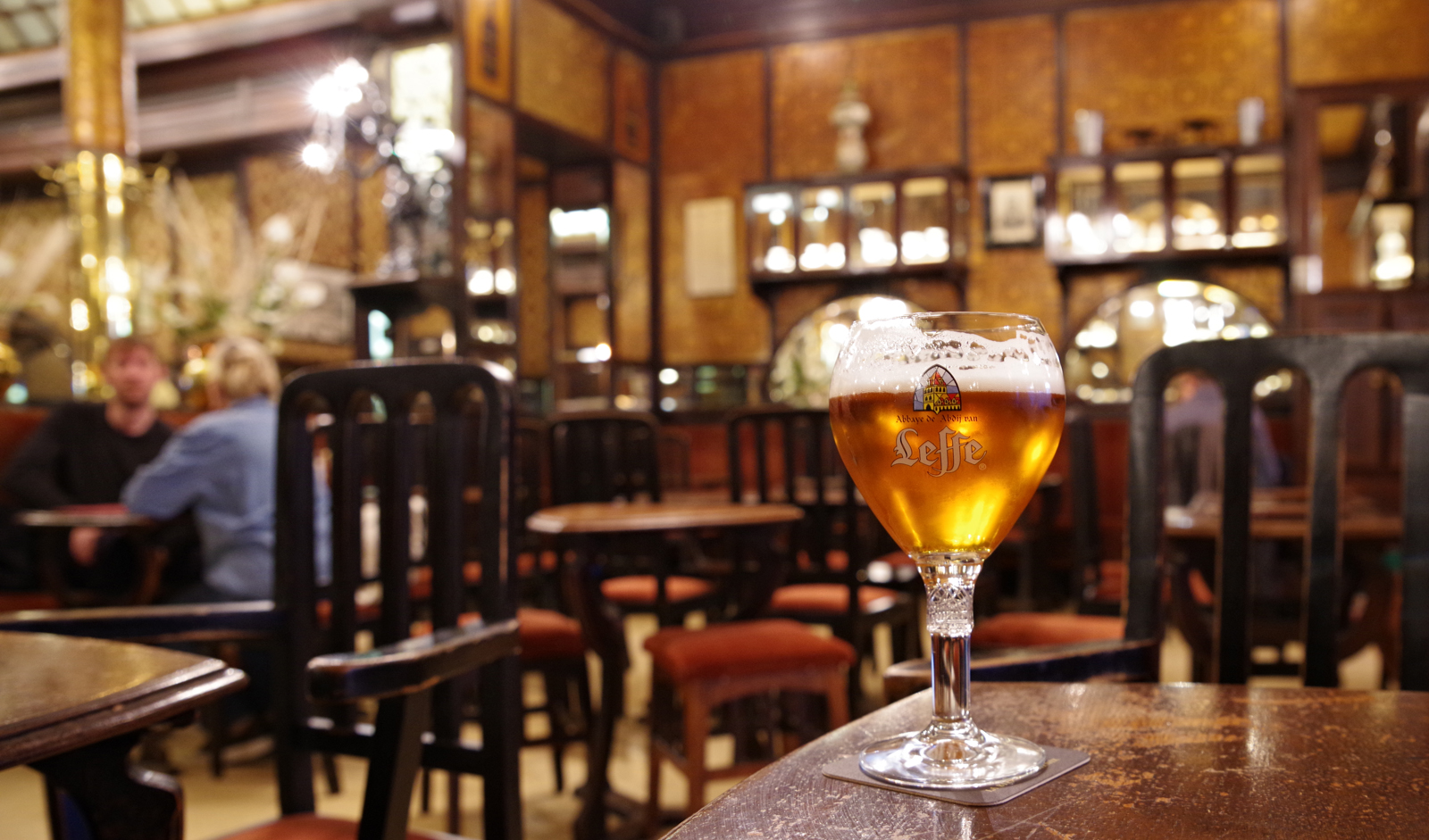 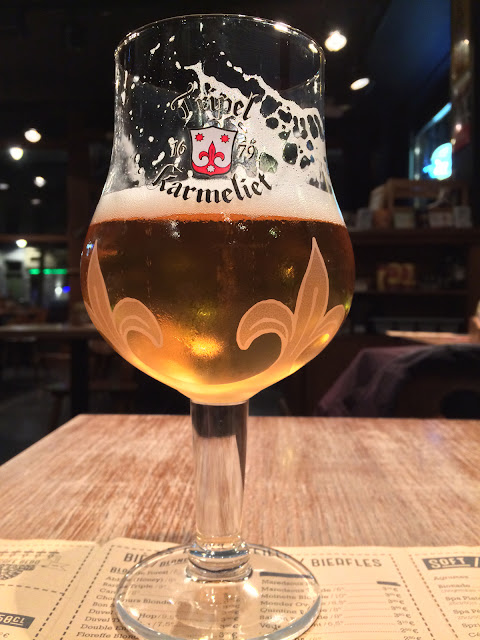 Other Belgian beers include White (made from half wheat and half malted barley), produced famously by Hoegarden; Brown (rich in malt and slightly caramel flavoured), often used in carbonnade flamande, particularly well made in Oudenaarde where the water is particularly soft; and Red, which is matured in large wooden tuns.  The Rodenbach brewery produces some of the best of the reds. 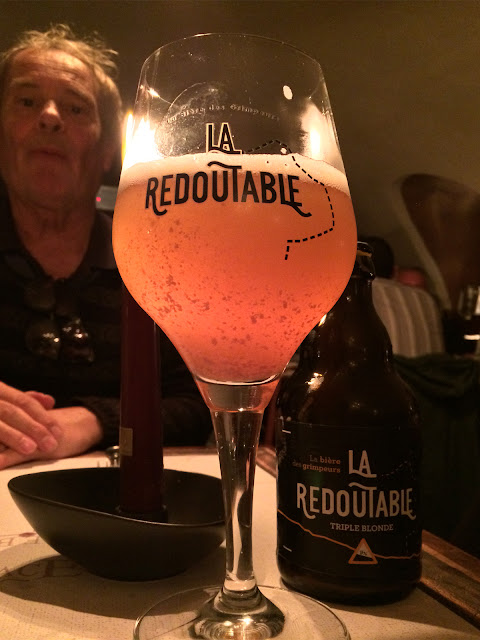 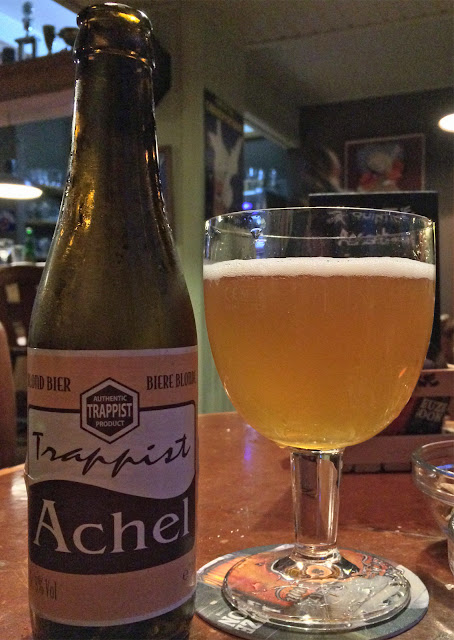 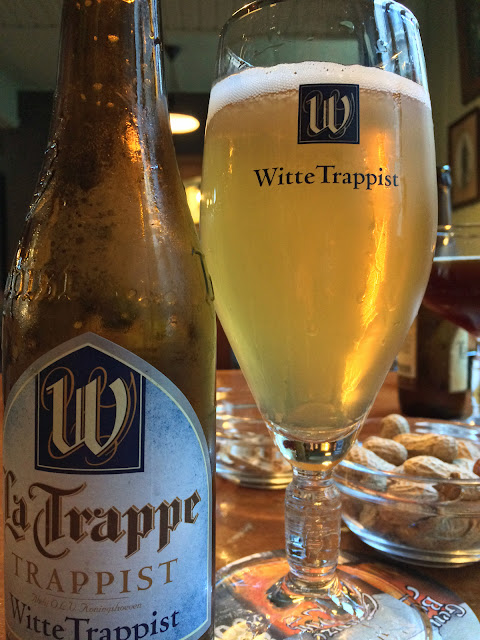 But the contemplative, austere Trappist monks in a handful of Belgian monasteries are the master brewers whose products are without rivals.  These beers are not closely related to each other, having very distinct characteristics, but they belong to a family, with secondary fermentation in the bottle leading to strength, depth, and character.  Authentic Trappist beers are brewed within the walls of a Trappist monastery, under the control and responsibility of the community of monks, who are involved through the process of making and marketing the beer.  Most of the income generated by this activity is devoted to the needs of the community and social works. 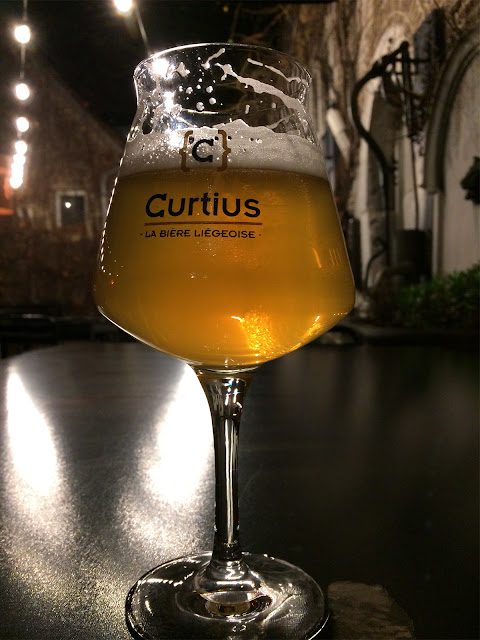 Typically, taking Westmalle as an example, these beers may be designated Single (or Extra) [only brewed by Westmalle twice a year and  produced for the monks and their guests for their midday meal], which tends to be bright and golden; Dubbel, stronger, dark-brown and nutty (7%); and Tripel which is pale bronze complex and aromatic (9.5%).

The Trappist monasteries in question are Orval (almost certainly brewing its own beer since 1529, but reinvented commercially in 1931 to fund the reconstruction of the monastery); Chimay (whose Bleu, at 9%, is a wonderful dark ale with a powerful aroma); Rochefort (founded in 1230; brewing since 1595); Westvleteren (near Poperinge, whose label-less bottles are rationed, and retail at about €36 a litre….) and Westmalle (brewing since 1836 but since 1991 having a bottling capacity of 45,000 per hour). 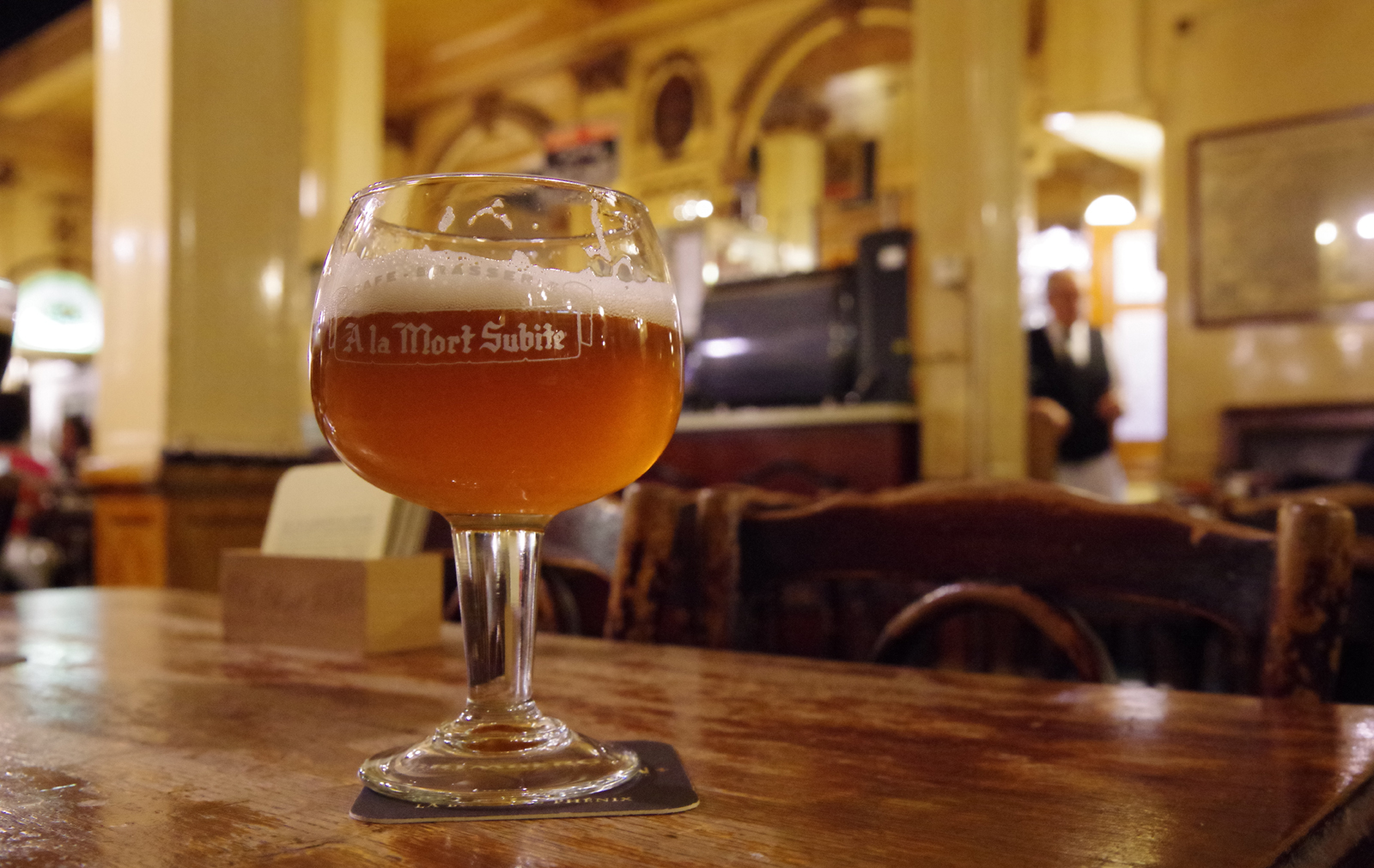 Not to be confused with the Trappist beers are the many Abbey beers, which are made by commercial brewers in the environs of active monasteries, which may be Benedictine such as Affligem, Norbertine (or Premonstratensians, or White Canons), such as Leffe or Grimbergen, or Carmelite, such as Karmeliet.  These are excellent beers, and, like the Trappist ones, can be strong.

But, so what?  These are the wines of the north.  It is not the custom to quaff them by the pint…..  These are beers to be savoured.  With a little cheese, and perhaps some bread.

And a little conversation, perhaps….. 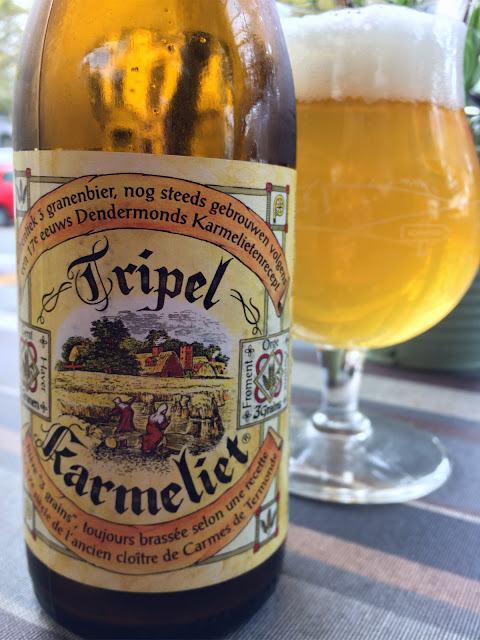 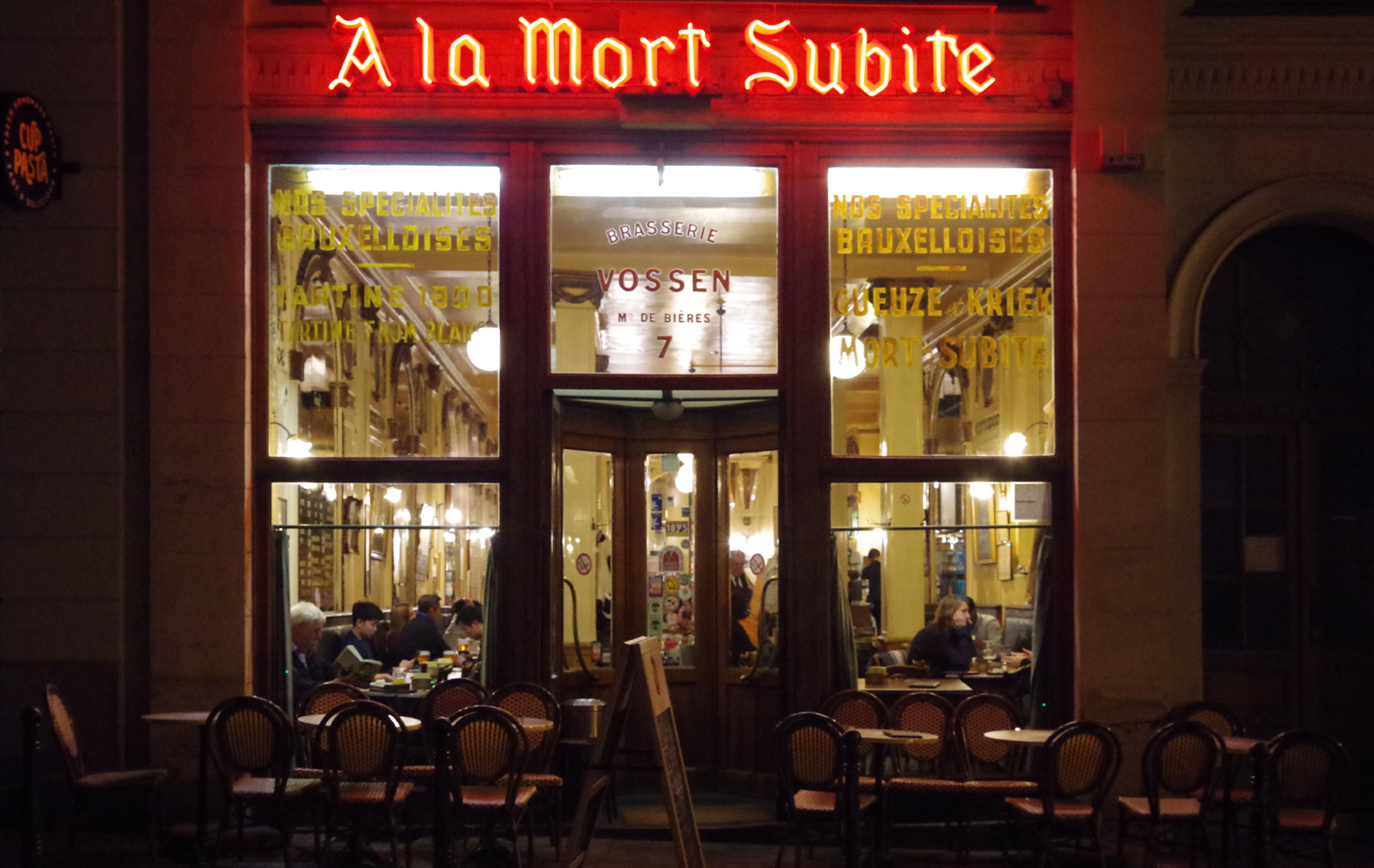 I love Jacques Brel....  He is still here, all around.  In one of his favourite bars, A La Mort Subite, {rue Montagne-aux-Herbes Potagères 7, B-1000 Bruxelles} he can still be sensed drinking, smoking, pensive, as if composing…. 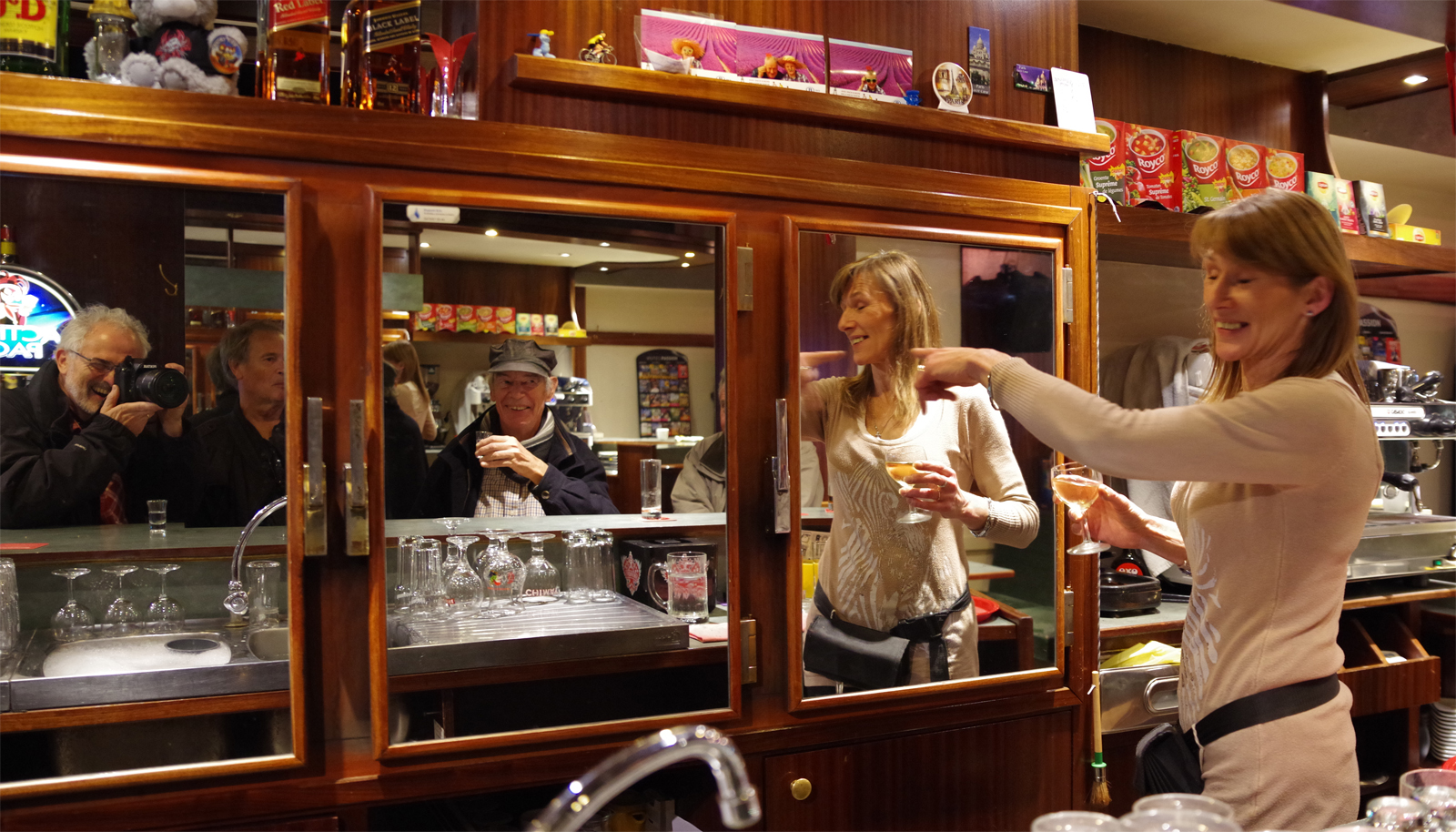 But, after all that beer, there's just time for a digestif.....  In Liège, Wallonia, they peddle a kind of gin known as genièvre (colloquially as pèkèt). This stiff grain-spirit is often served in glasses little bigger than a thimble. 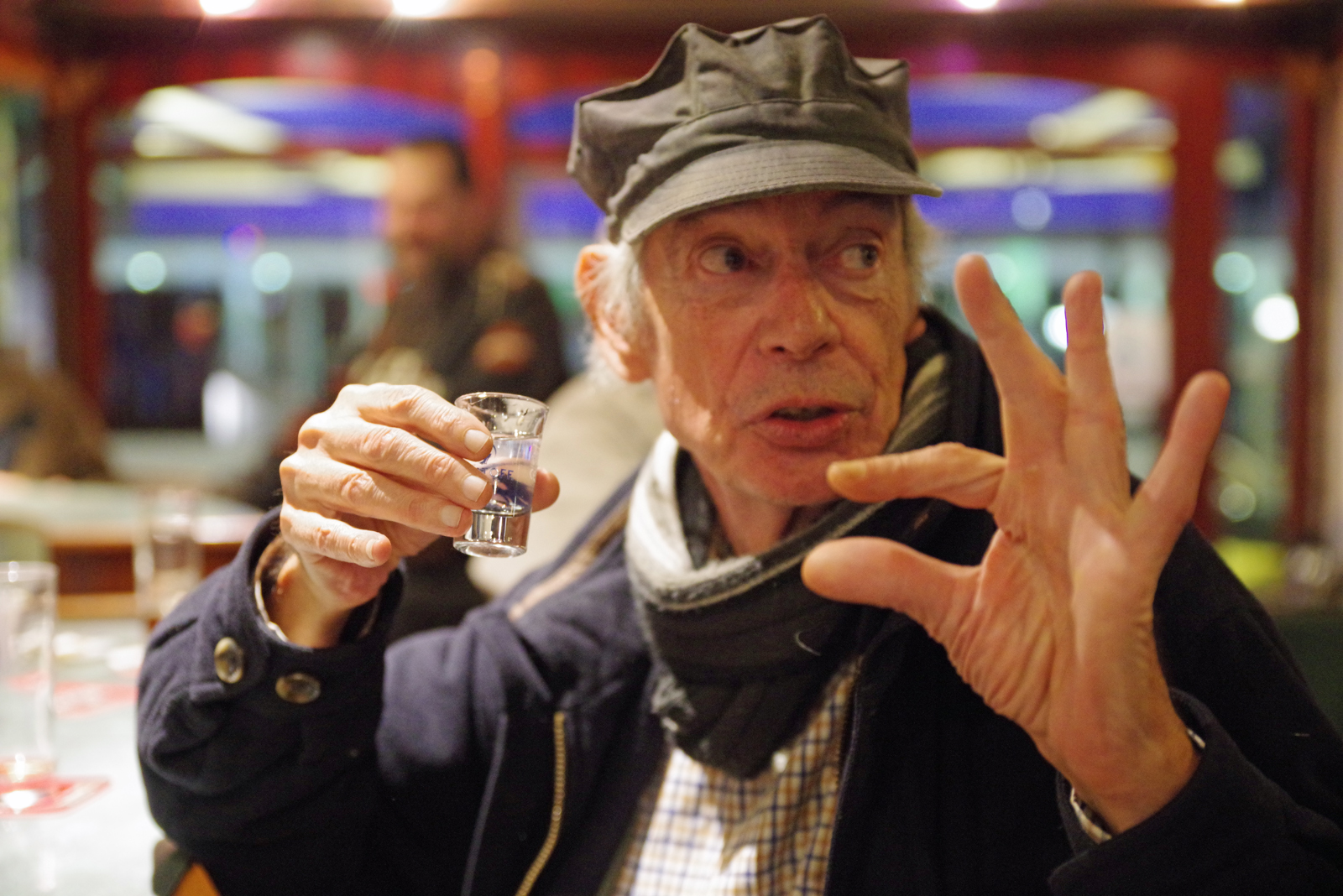 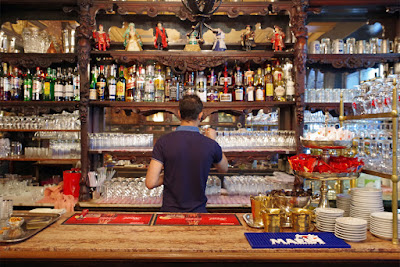