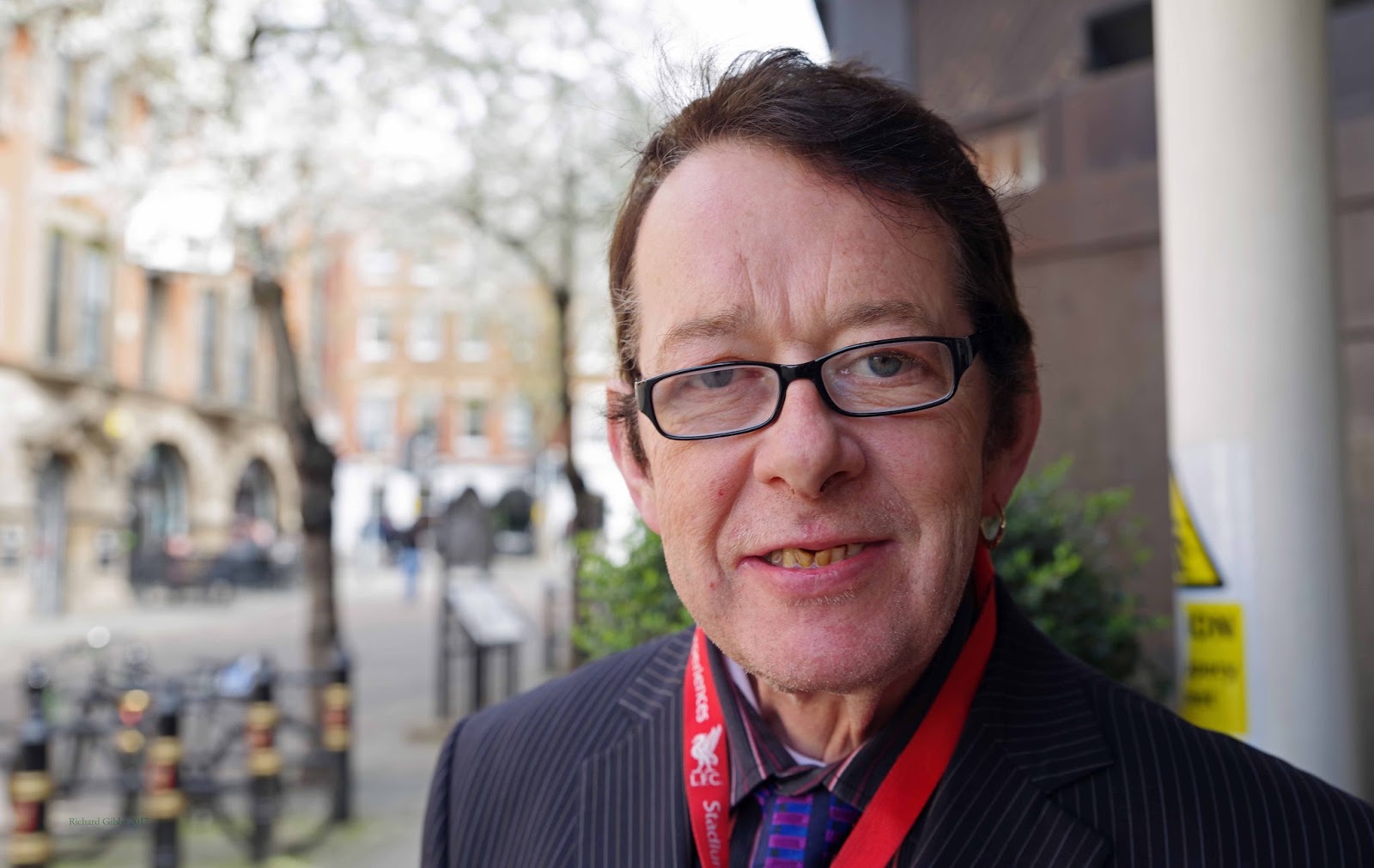 I’m me, and nobody else; and whatever people think I am, that’s what I’m not, because they don’t know a bloody thing about me.  The words of Arthur Seaton, a lathe operator in Nottingham’s bicycle factory in the 1950’s, as reported in Alan Sillitoe’s ground breaking novel Saturday Night and Sunday Morning.  In 1960 film director Karel Reisz and then unknown actor Albert Finney brought these words to the screen.  The working class angry young man became a star….. 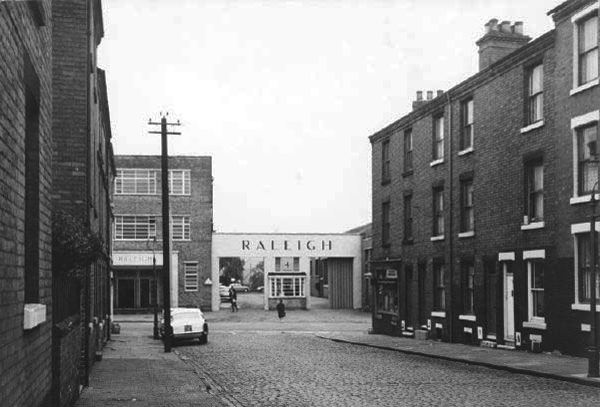 I am staying on the site of that very factory, where Sillitoe worked and where Reisz filmed.  The Raleigh Cycle Company was founded in 1888, taking its name from the street where Frank Bowden had set up business.  At the peak of its success the company employed about 10,000 people and produced two million bikes a year. 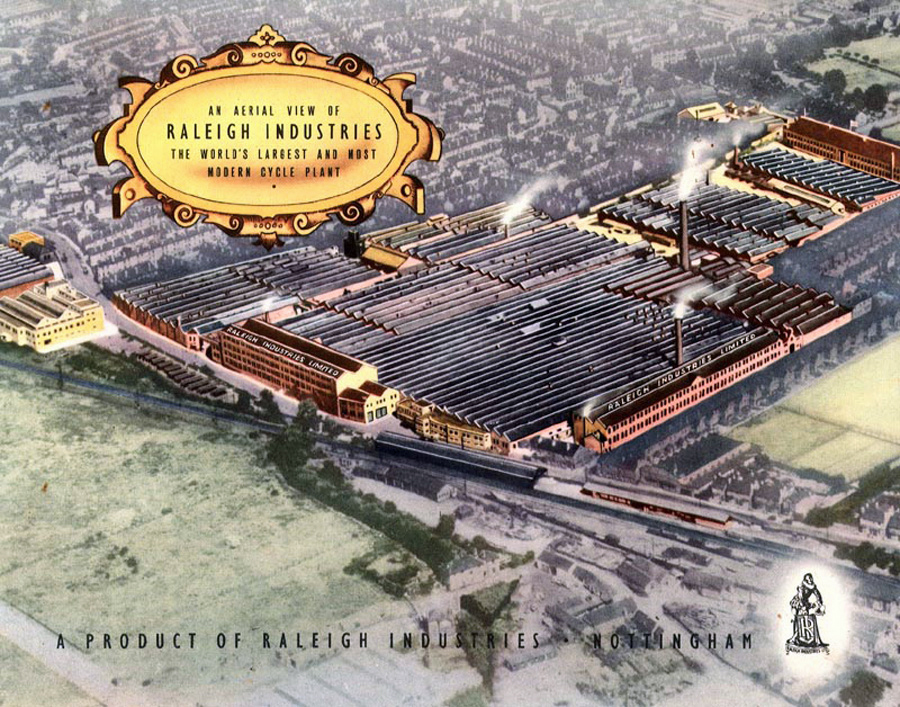 Competition from abroad led to economic difficulties at the end of the 20th century however and the company moved production to the far east and sold its site to the in 2003.  Which is where, on the Jubilee Campus, I find myself. 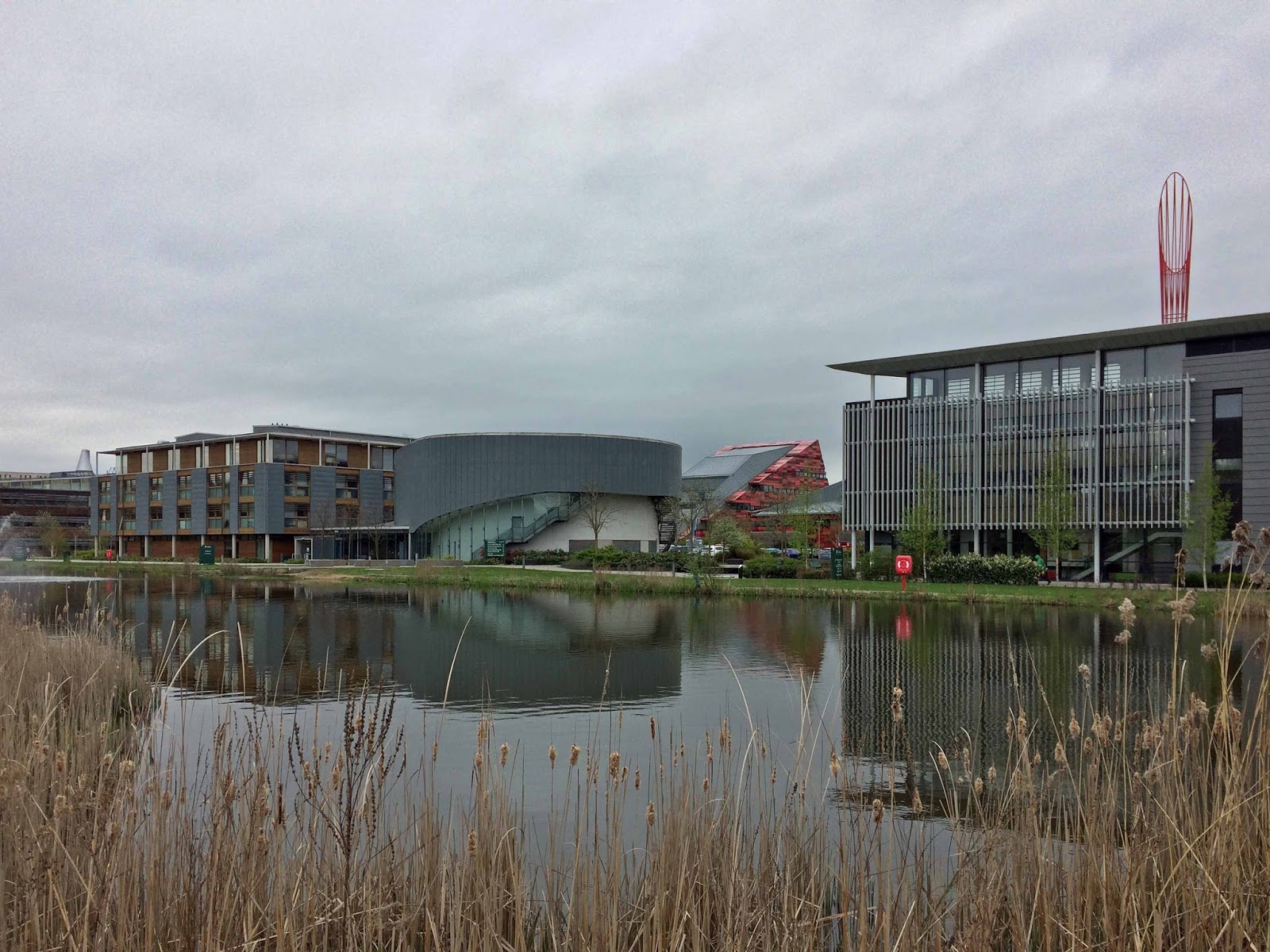 In 1725 Daniel Defoe, when on A Tour through the Whole Island of Great Britain, wrote that, Nottingham is one of the most pleasant and beautiful towns in England.  The situation makes it so……  And in Reisen eines Deutschen in im Jahre 1782, Karl Philipp Moritz, enthused that, Of all the towns I have seen outside , is the loveliest and neatest. Everything had a modern look, and a large space in the centre was hardly less handsome than a square…… Nottingham ... with its high houses, red roofs and church steeples, looks excellent from a distance.  Which, I suppose, depends rather on just how distant you are…. 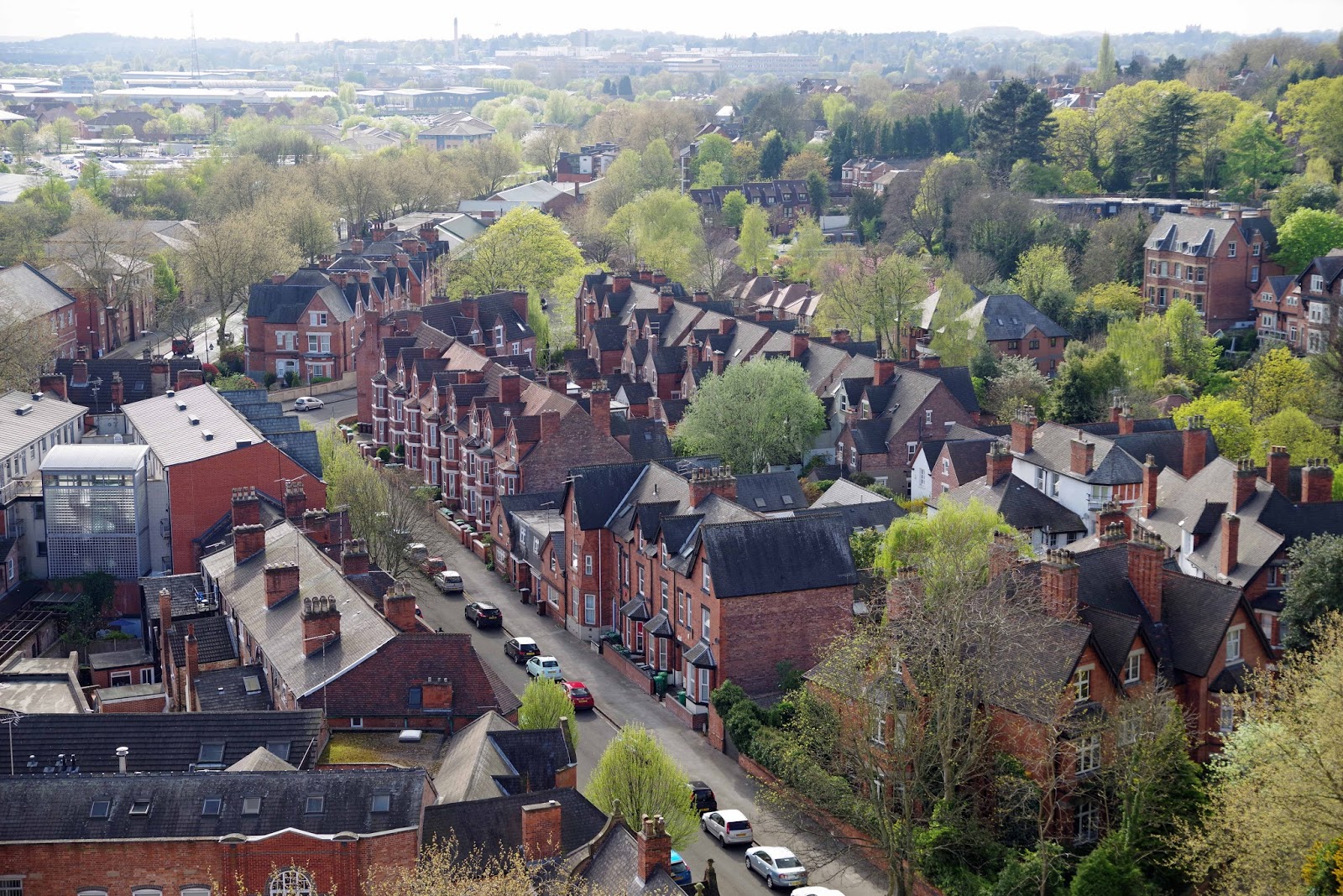 This was my first stay in the city.  I have skirted it before, and visited Lord Byron’s home at Newstead Abbey more than once (please see http://www.richardpgibbs.org/2014/01/lord-byron.html  for more on this). 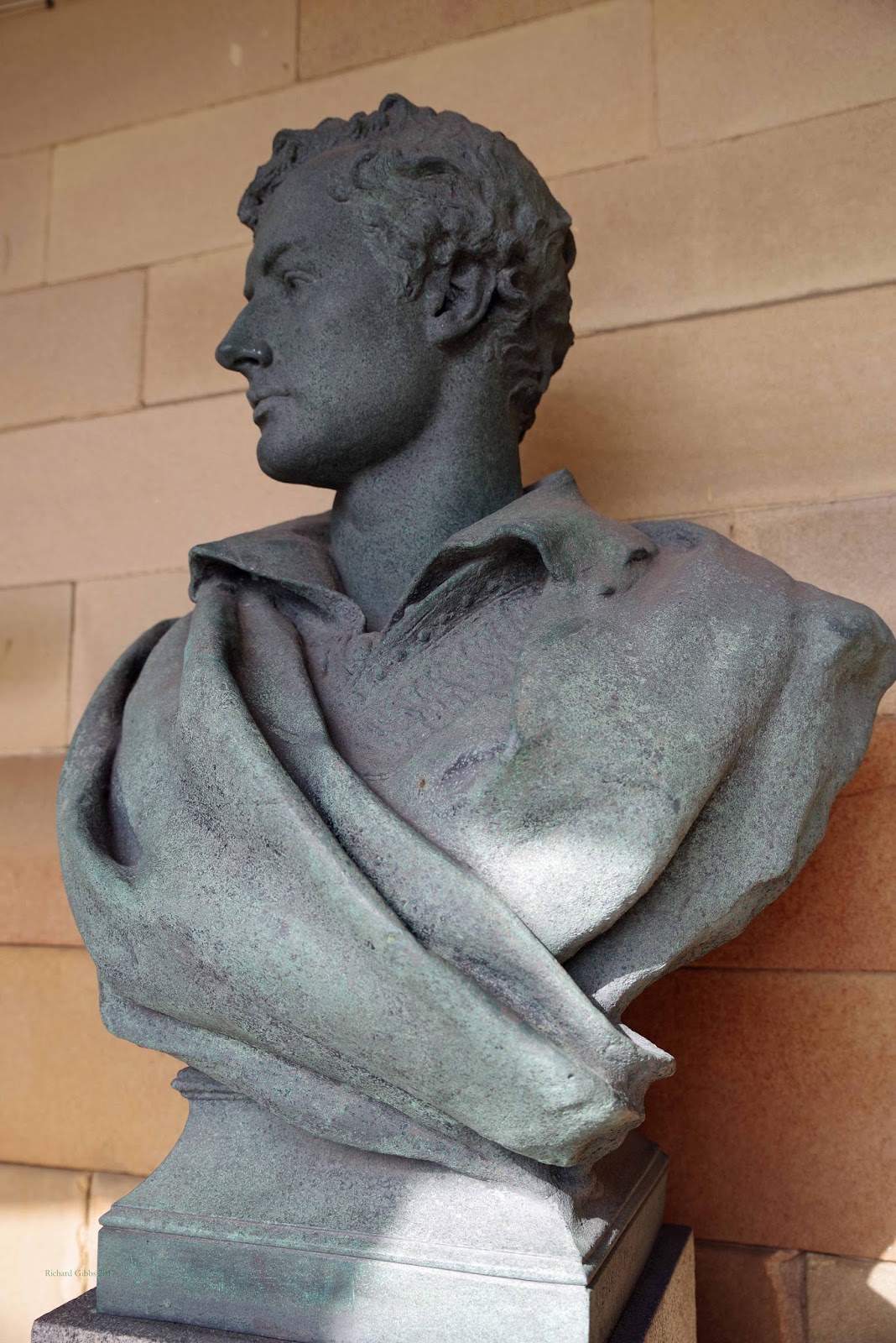 I passed through Eastwood once, too, ferreting out the slightly less grand (though no less evocative) birthplace of D H Lawrence (https://www.liberty-leisure.org.uk/d-h-lawrence-birthplace-museum/) 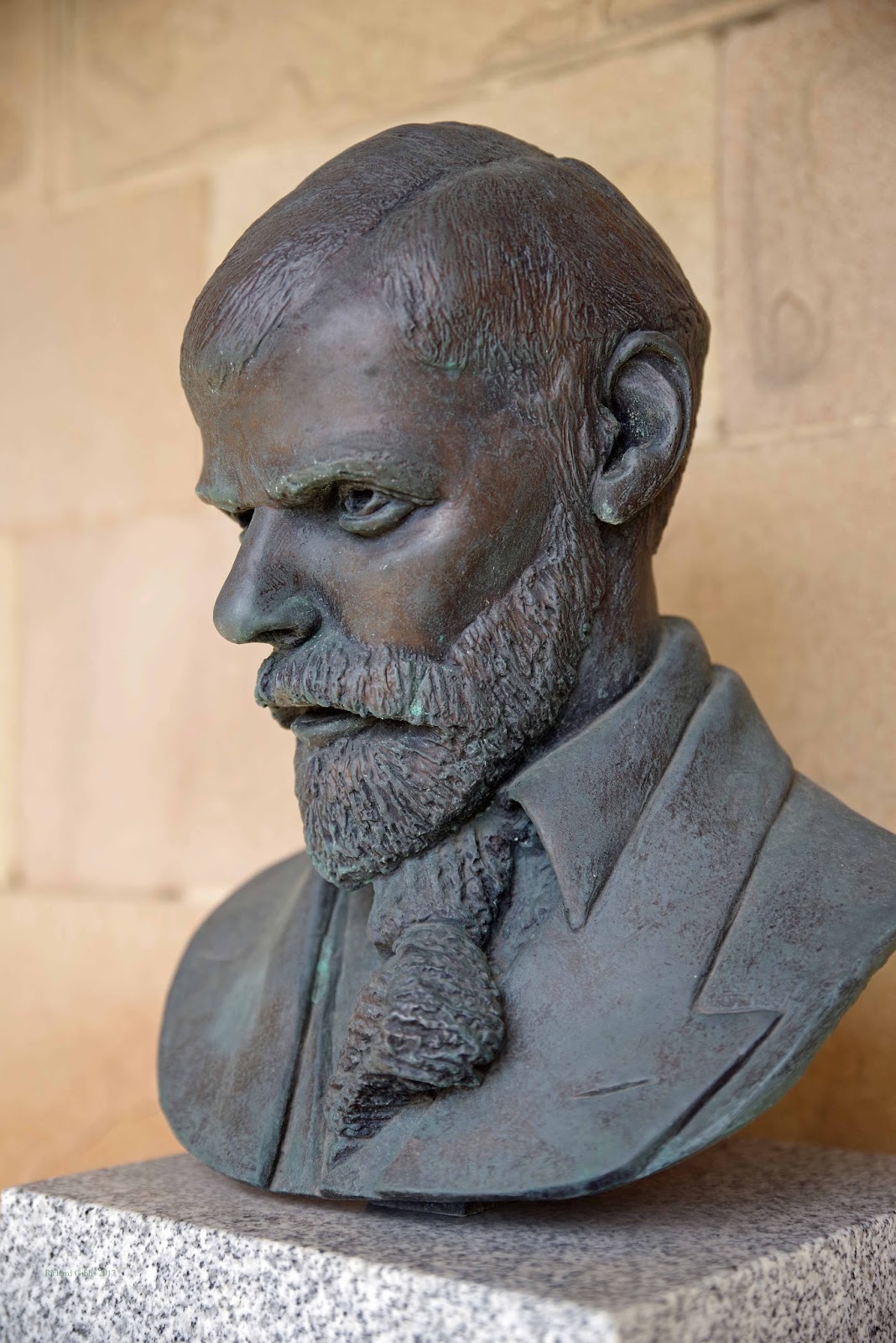 but I had never before seen the green plaque on a central Nottingham wall which marks the place where our hero worked as a clerk at Haywood's Surgical Garments factory in 1901, before succumbing to a near-fatal bout of pneumonia…..

It is Easter time.  The cherry trees are blooming in the Castle Grounds. 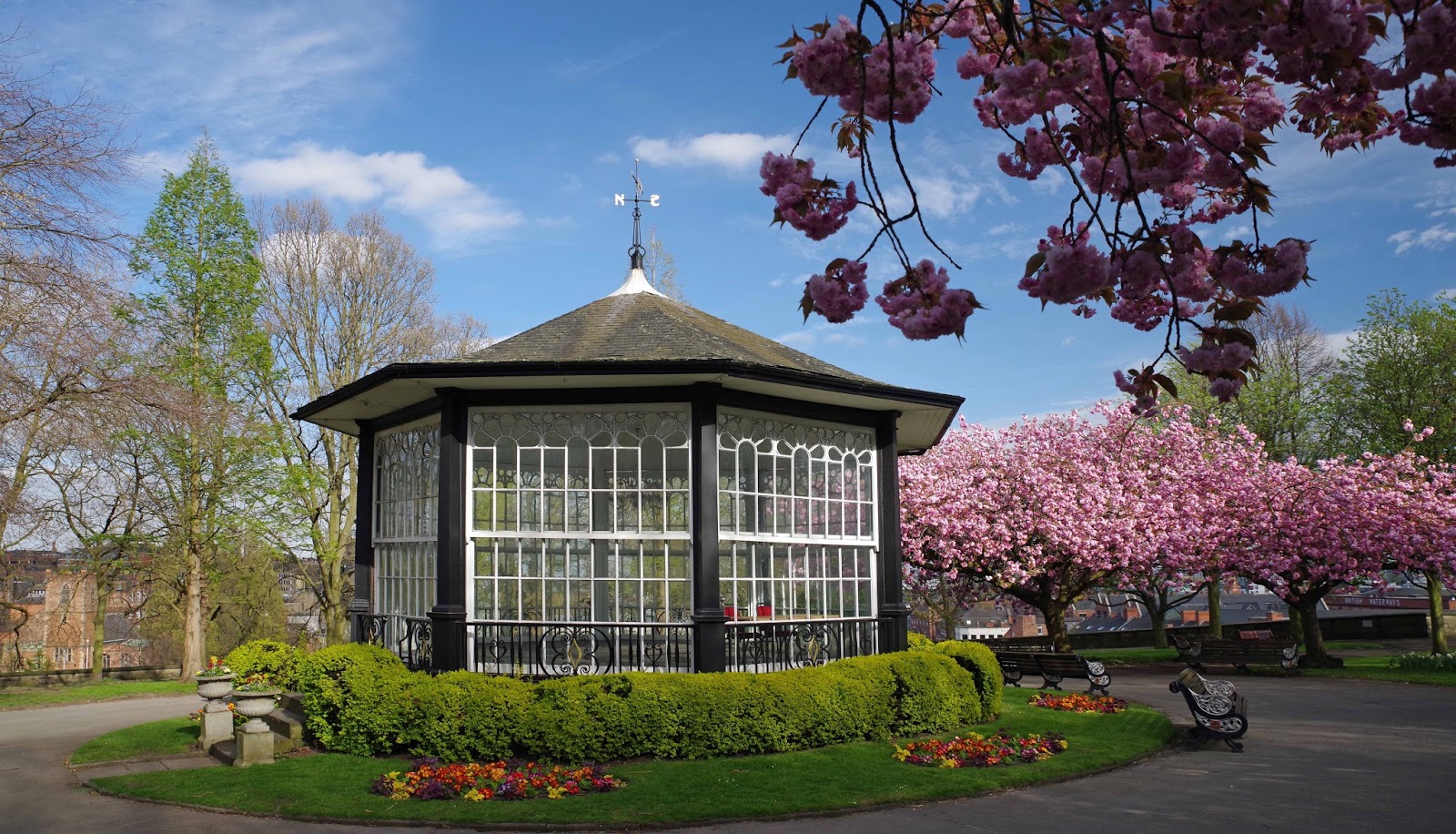 The students (some seventy-thousand of them) are away and the taxi drivers complain of idleness. 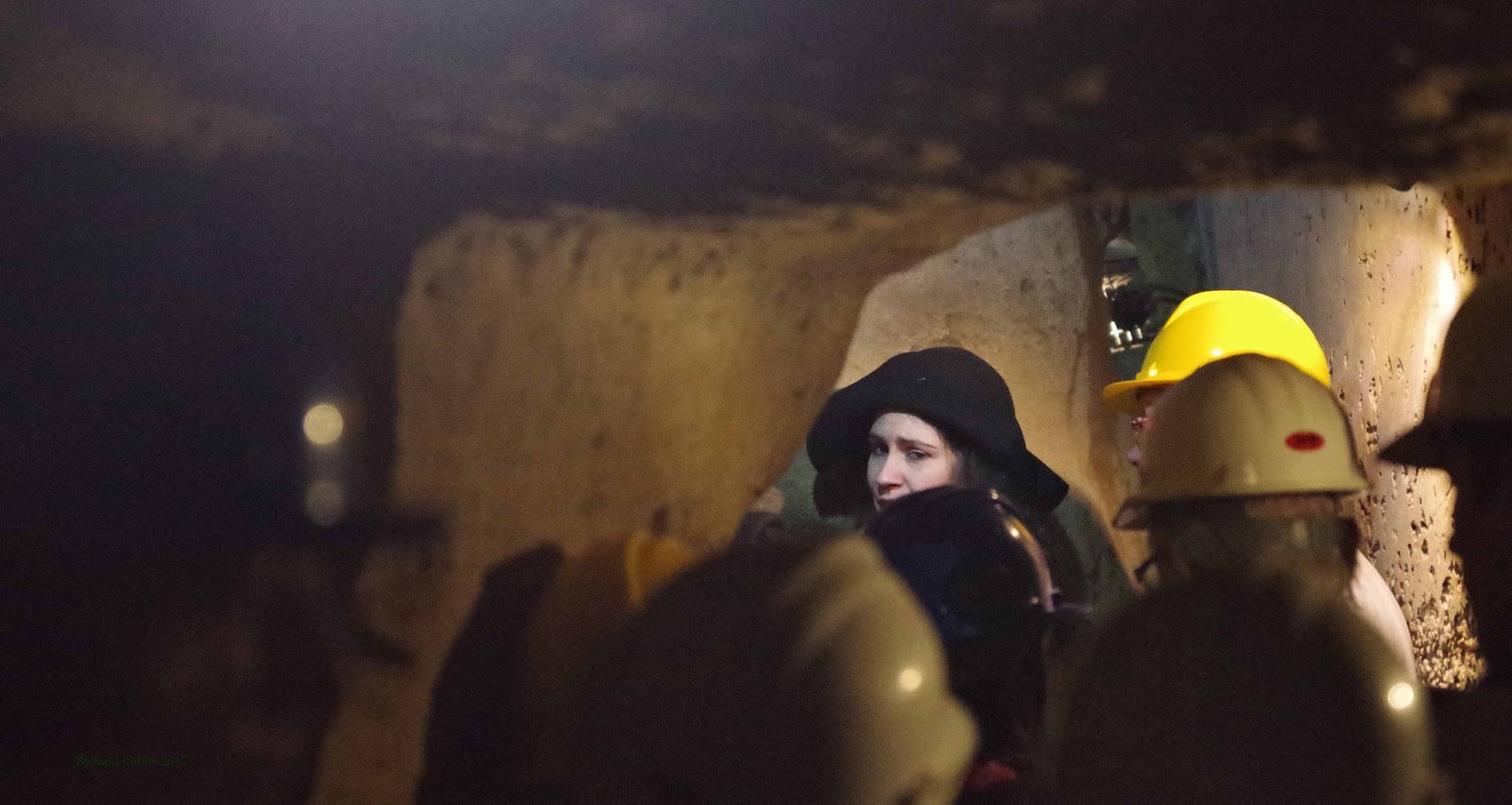 I join some Spanish school children on a tour of the City of that riddles the soft sandstone under the Broadmarsh shopping centre.

I inspect the sanitised cells in the underworld of the . 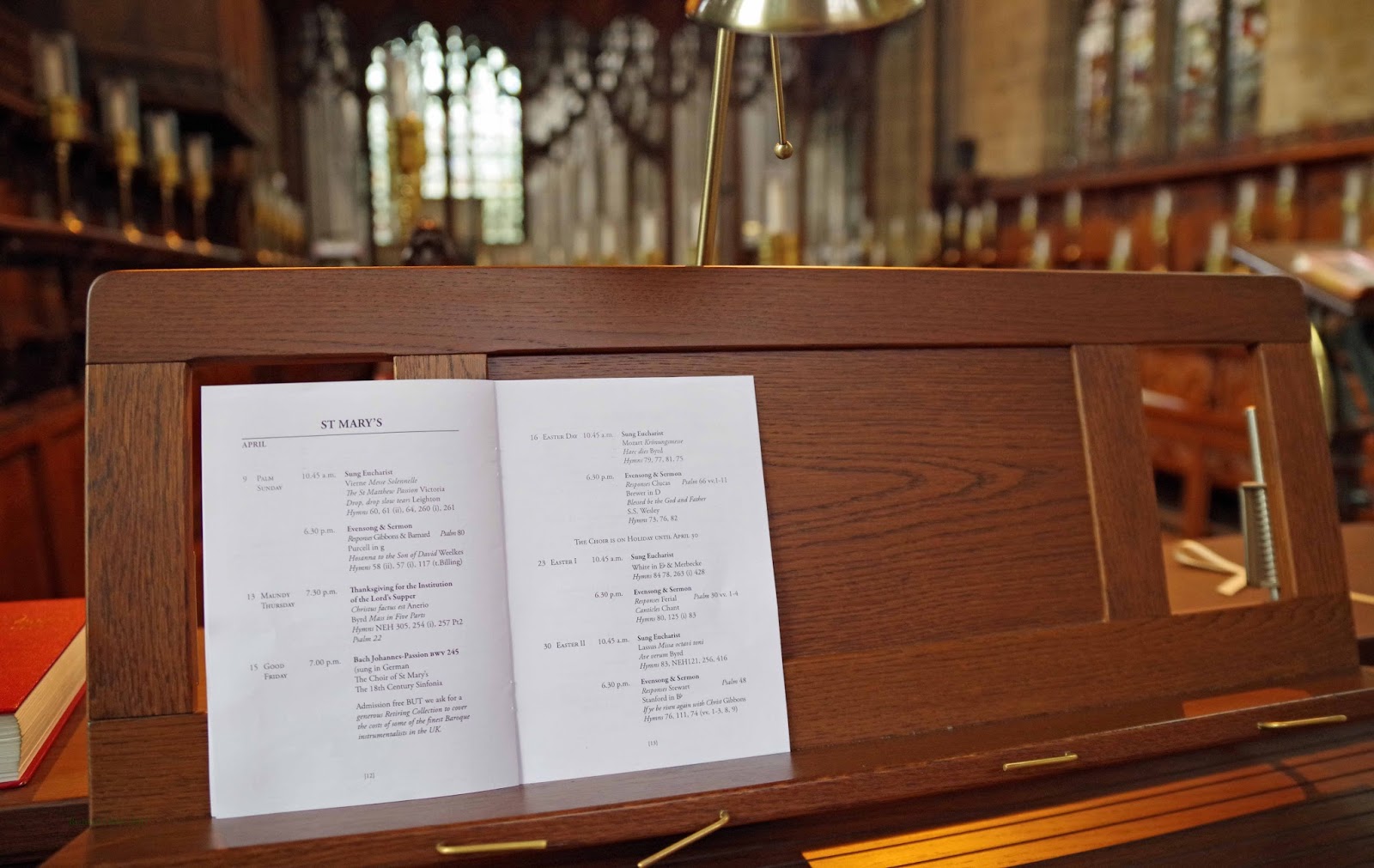 In St Mary’s church I learn that is a city without a cathedral (the Bishop’s seat is at Southwell Minster – the Cathedral Church of Nottinghamshire, where, as I write, they are holding an interactive exploration of the passion of Jesus…..) 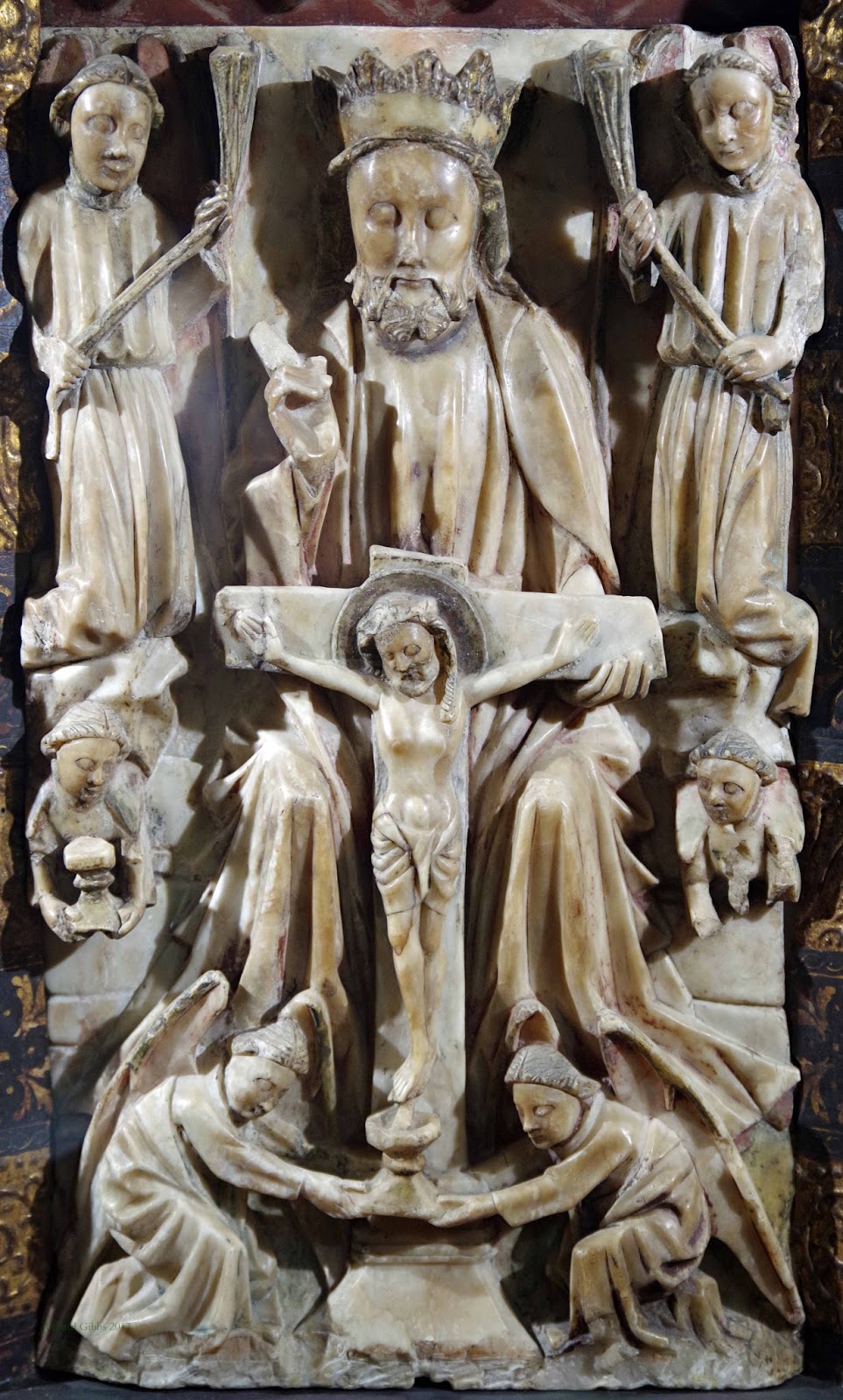 The Church of St Mary the Virgin’s address is High Pavement, Lace Market, and round here the tall buildings reflect another of ’s past industries. During the days of the British Empire, according to the Experience Nottinghamshire  website, was a world leader in lace making and the Lace Market area was full of impressive examples of 19th industrial architecture. Although it was never a market in the traditional sense, the area is full of salesrooms and warehouses for storing, displaying and selling the lace. 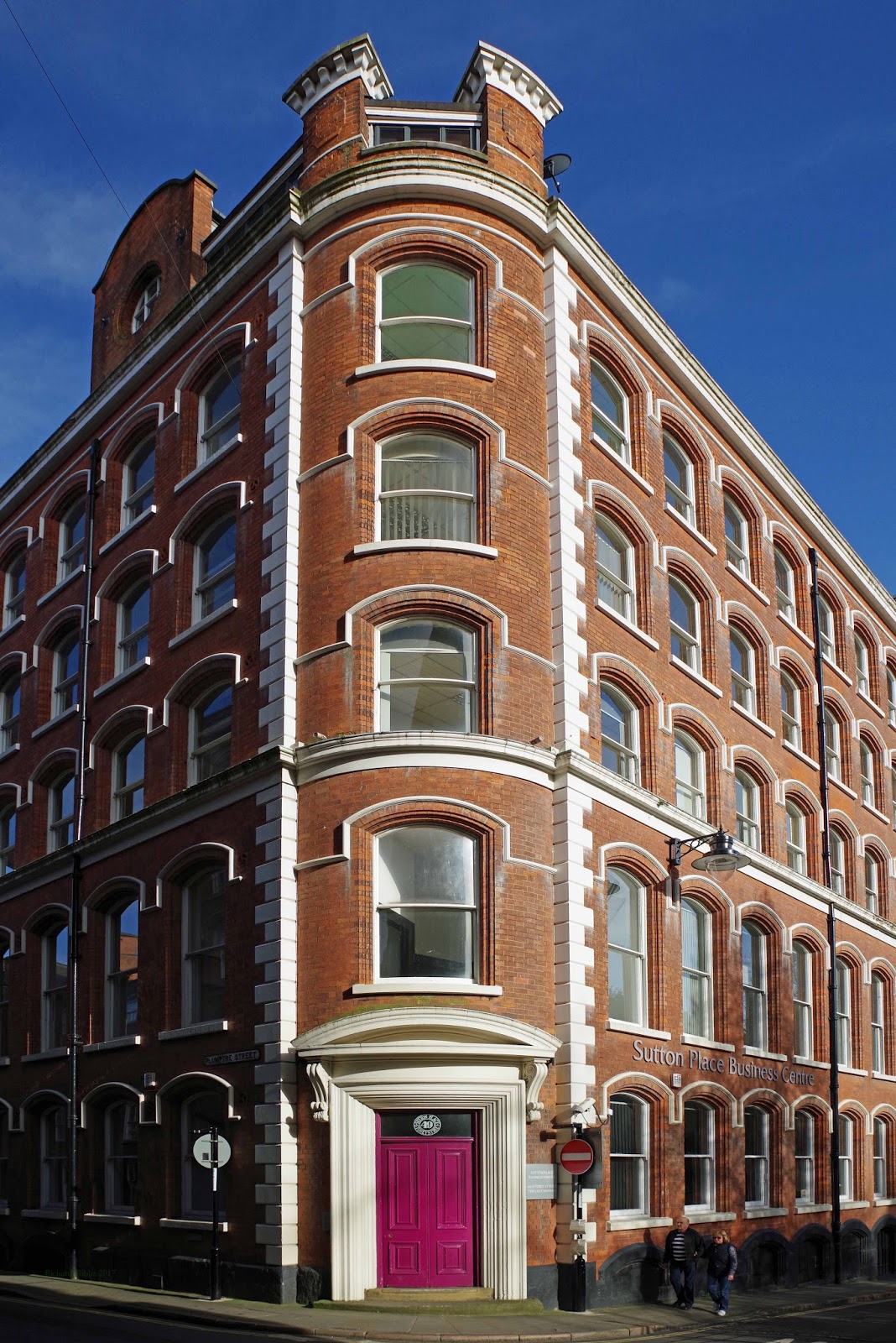 Today, the area has been transformed into one of the hippest parts of the city, with the former warehouse buildings now converted into apartments, bars, restaurants and shops…..

And another flagship industry is now no more.  In Nottingham, in 2014, Imperial Tobacco closed the last cigarette factory in , with a loss of 540 jobs….  The business was started by John Player in 1870, and once employed 7,000.  John Player Navy Cut cigarettes were one of the most recognisable brands of John Player and Sons and the parent company Imperial Tobacco. The international popularity of the brand meant that the castle trademark, used on the reverse of this packet, became the most viewed image of a castle in the world in the first half of the 20th century……  I read in the Illustrated Handbook to Nottingham (Edited by Lemon Lingwood in 1906) that, owing to the large area occupied, it is difficult to obtain a  photograph that will convey an adequate idea of the dimensions of Messrs. John Player & Sons' enormous factory…. 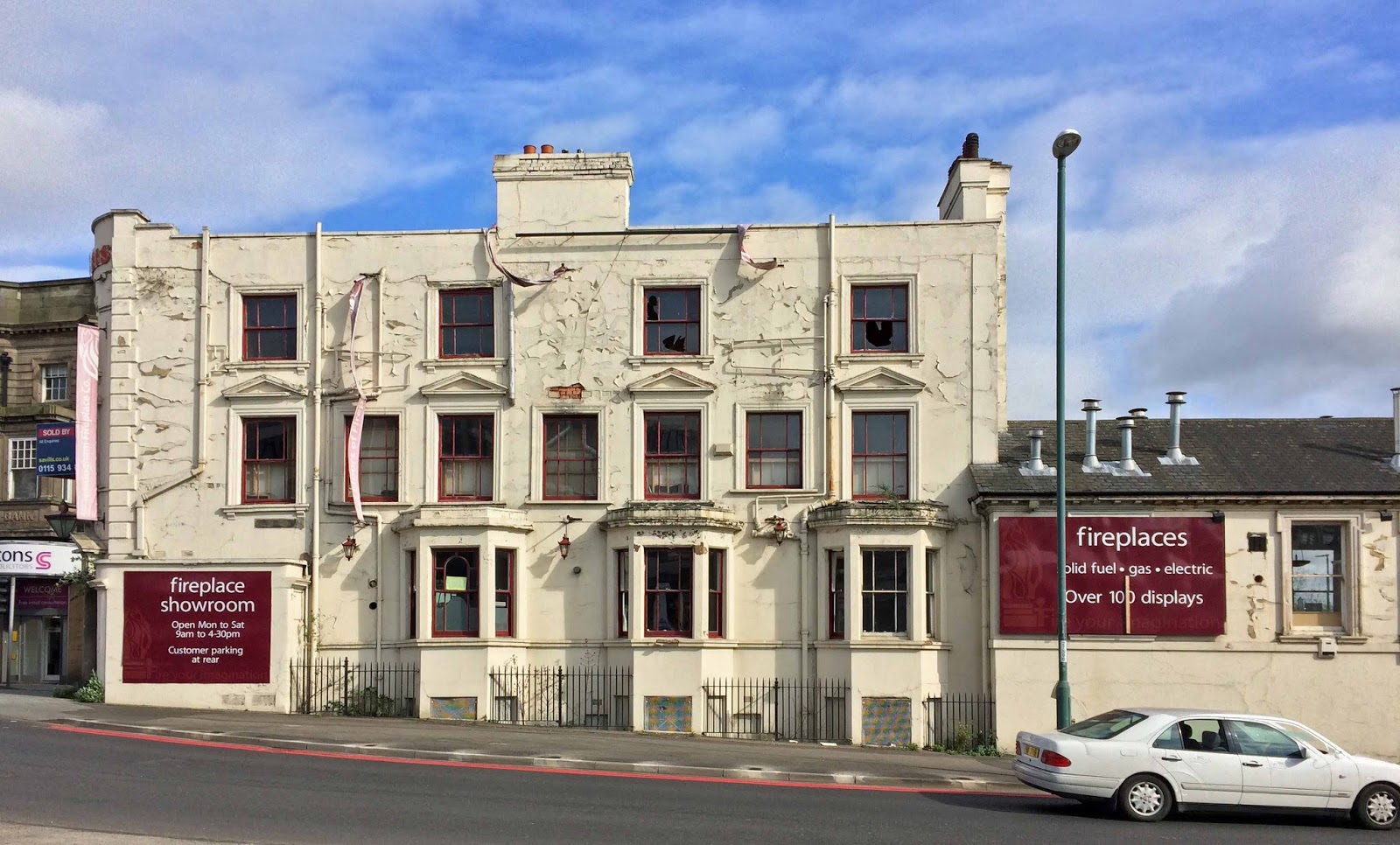 The Castle Tobacco Factory plays a conspicuous part in the commercial enterprise of , and some 1,600 people find happy and profitable employment within its walls. The total area of the premises, comprising Tobacco Factories, Bonded Warehouses, Saw Mills, and Offices, is 45/6 acres exclusive of the roads and causeways, the floor areas equalling some 310,000 superficial feet, or upwards of seven acres.  Or so it did once…..

Not everything has disappeared, however.  There is (are?) still, Boots. A great and growing business (again, I quote from the Illustrated handbook of 1906.)  These words fittingly introduce us to one of the largest commercial enterprises of Modern times. Truly, Boots', Cash Chemists, with over 300 Branches in 150 Towns, can claim to be "The Largest, Best, Cheapest."  Today’s Company Information website has this to say:  has been home to the Boots brand since its humble beginnings when John Boot opened a small herbalist store on Goose Gate in 1849. The Boots Support Office is currently located on a 279-acre site in Beeston in , which was purchased by Boots in 1927 to expand the company’s manufacturing capability.  And they proudly advertise that, On the Beeston site, Ibuprofen was invented and leading brands such as No7, SEVENTEEN, Boots Soltan, Botanics and Boots Pharmaceuticals have been, and still are, developed, formulated and manufactured.  Just the very thought of all that makes me feel better….. 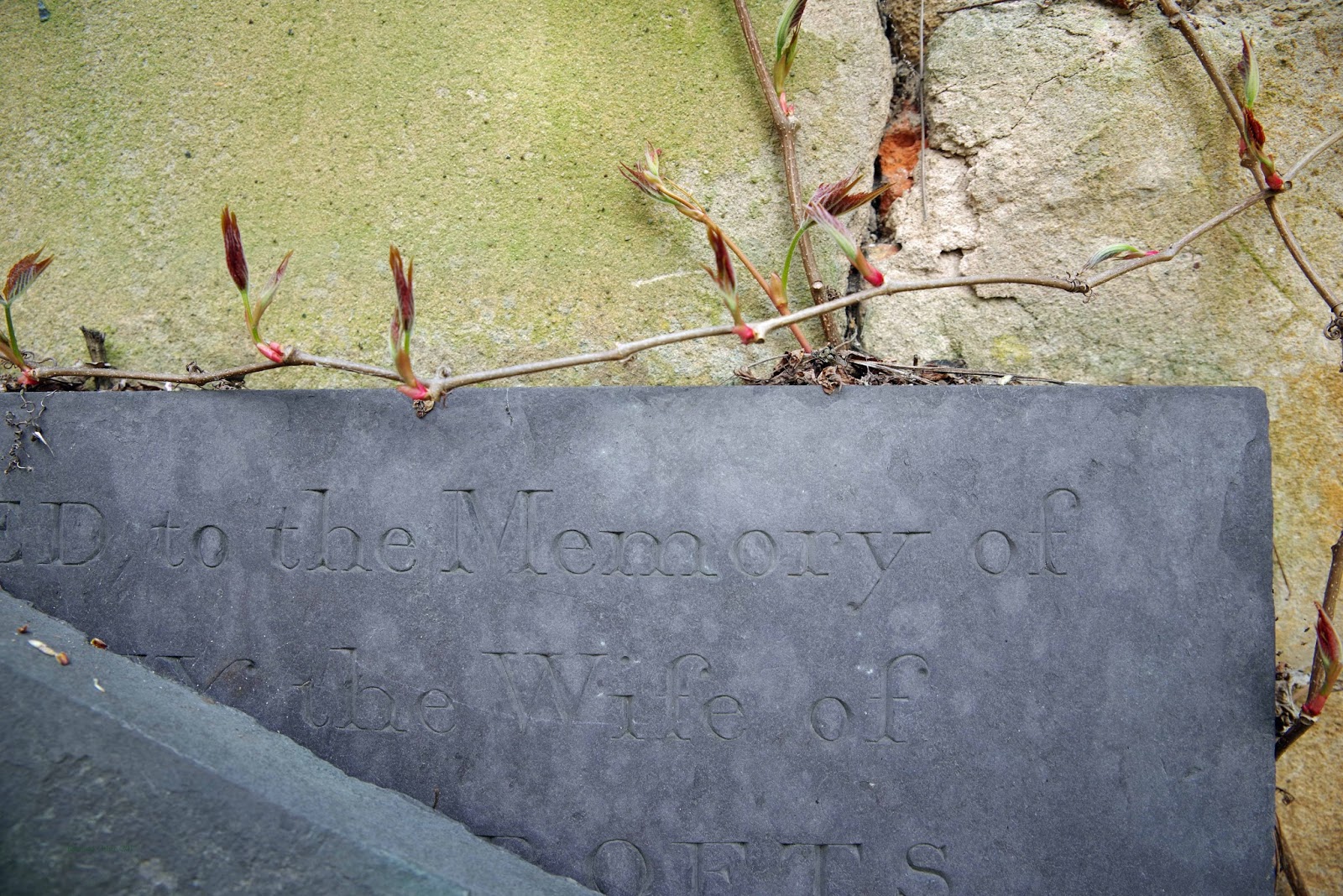 There is plenty going on in .  Apart from the (two) Universities, and all their students, and apart from the tourists ( is spending £29.4 million to increase its appeal, hoping for some 400,000 visitors a year).  In 2015, Nottingham was ranked as being in the top 10 cities for job growth (2004–13), in the public and private sectors. 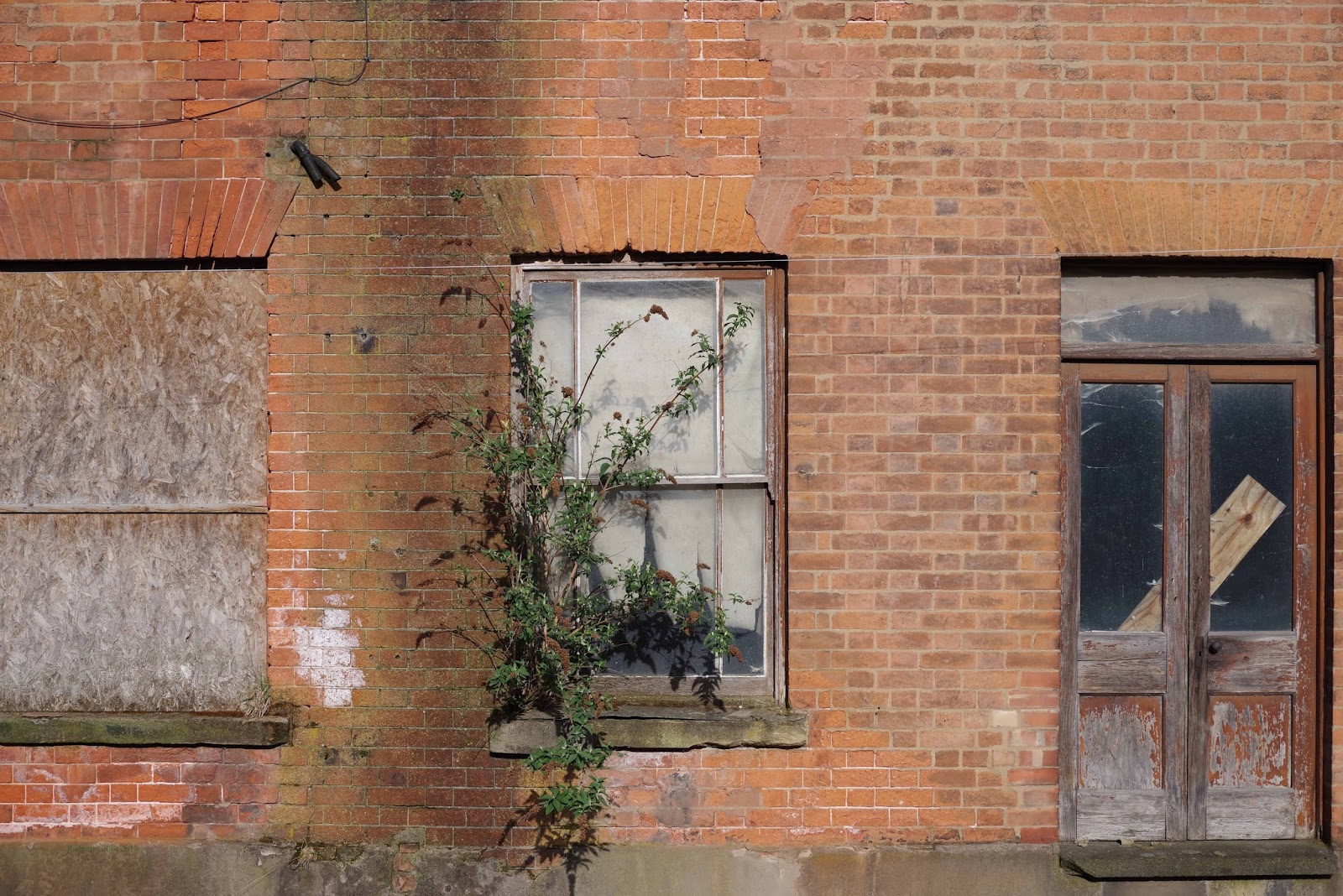 And in the same year, it was revealed more new companies were started in Nottingham in 2014/15 than any other city, with a 68% year-on-year increase.  From Castle Rock I look down on an extraordinary expanse of new rooftops that belongs to Her Majesty's Revenue and Customs (HMRC).

I wonder where they get their money from?

Although the old Labour Exchange may now be the Headquarters of Grace Church, 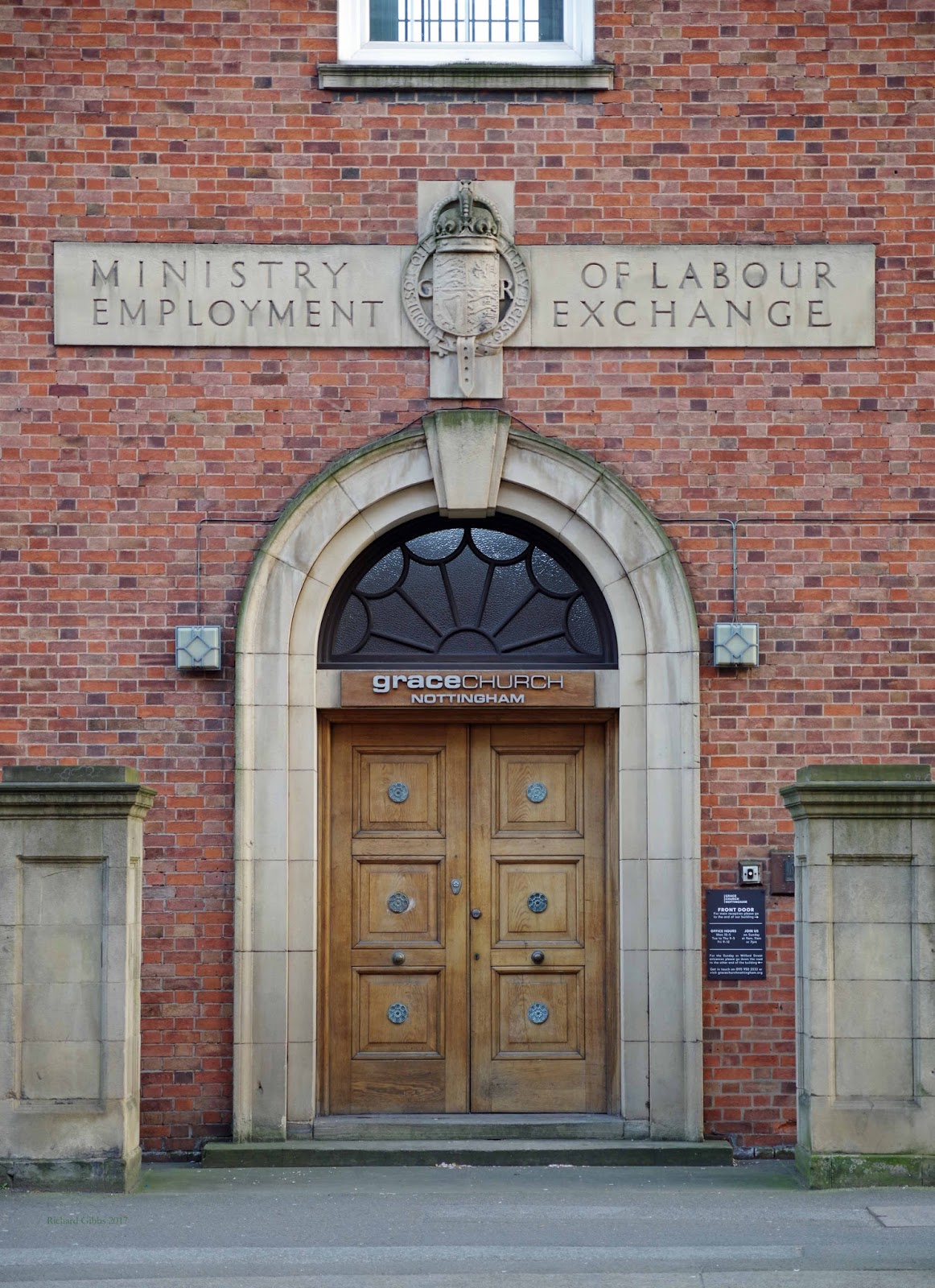 perhaps there are job opportunities in the city, though data from the Office of National Statistics reveal that, figures for February 2017 (released April 12th 2017) show 7,075 claimants (of unemployment benefits – out of a total population of 321,500) in Nottingham, an increase of 330 claimants in the last month. This includes 1,460 unemployed Universal Credit claimants. An increase is expected in February as temporary Christmas contracts come to an end.  The monthly increase of 4.9% in was higher than the national average but lower than the regional figure.  Which is some relief, I suppose…..

Though in the city centre I meet Paul David Cartledge, who is dressed in his best suit (with his treasured Kylie Minogue badge stitched on his waistcoat).  Paul is going for a job interview, hoping to gain work as a waiter so that he and his partner might be able to afford somewhere to live.  Paul is proud of his city, and is keen to tell me of the sights.  I thank him, and wish him well….  I have no reason to liken him to Arthur Seaton, but the words, I’m me, and nobody else, seem to fit.  Good luck, Paul….  There is a spirit here. 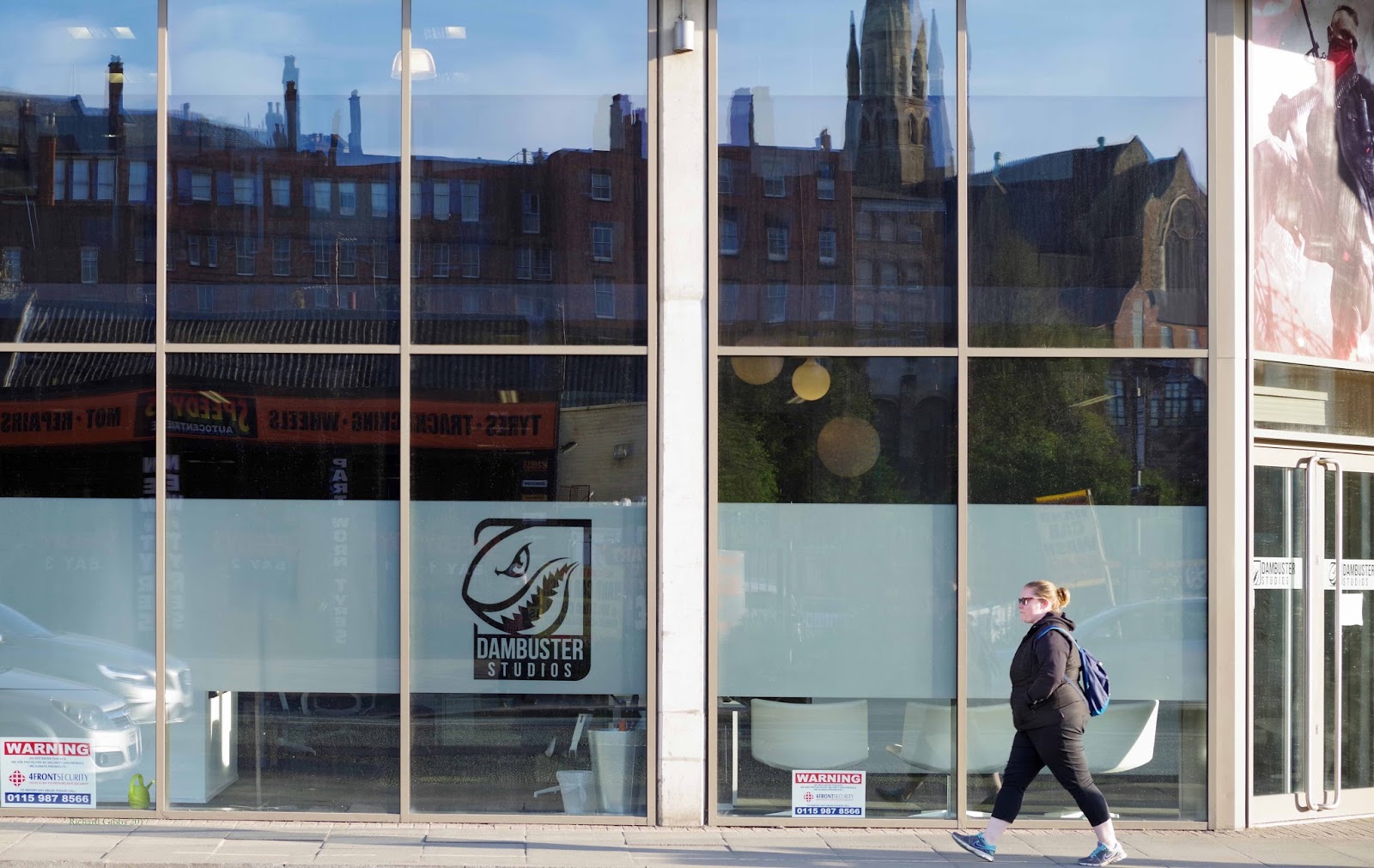 Nottingham in the eighteenth century may well have pleased the eyes of Defoe and Moritz, and it does have its attractions, but, even though the sun is shining, there is a tension in the architecture, the almost universal mismatch of styles that plagues so many of our cities.

Empty buildings are scrawled on, 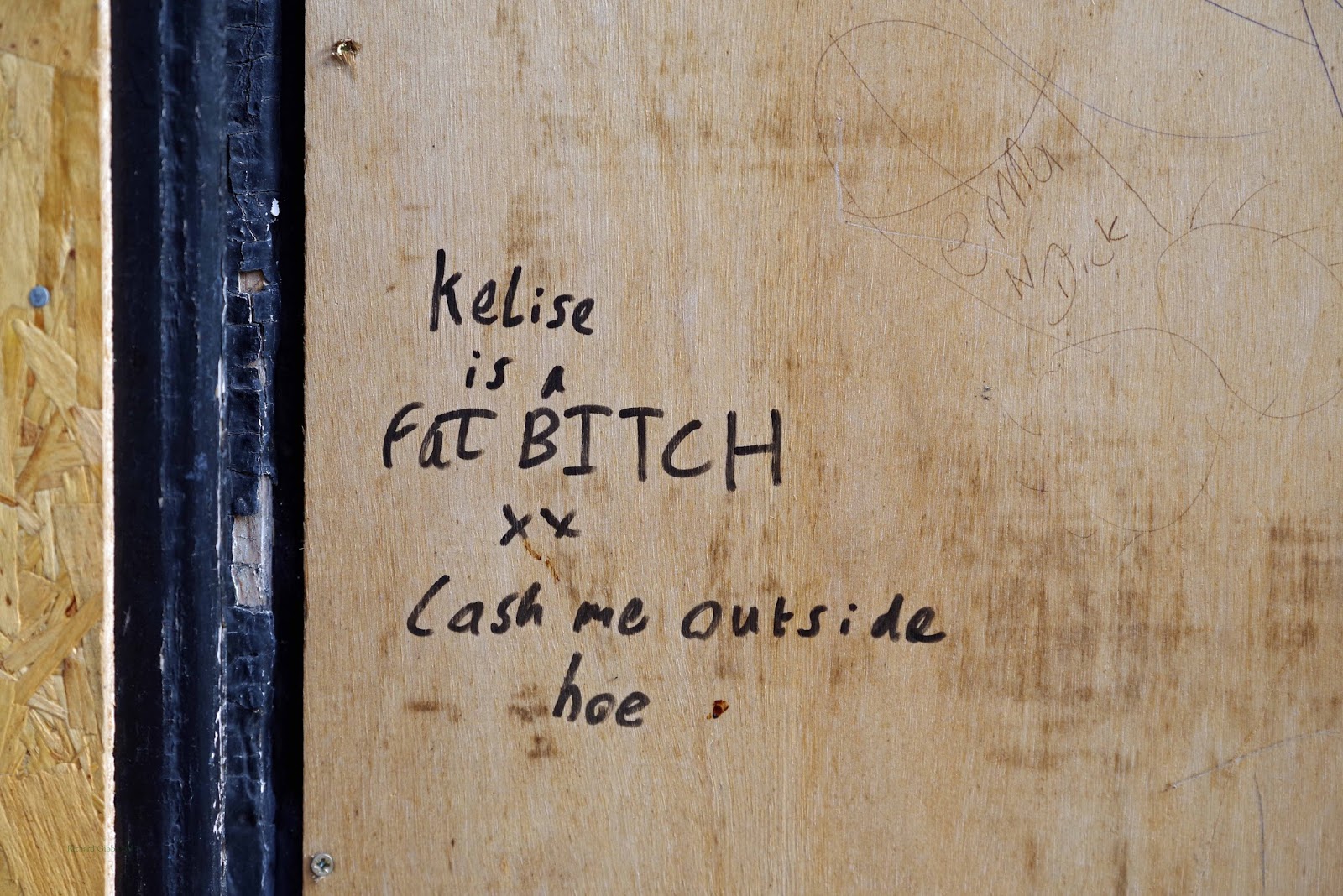 forwarding notices are taped to windows, 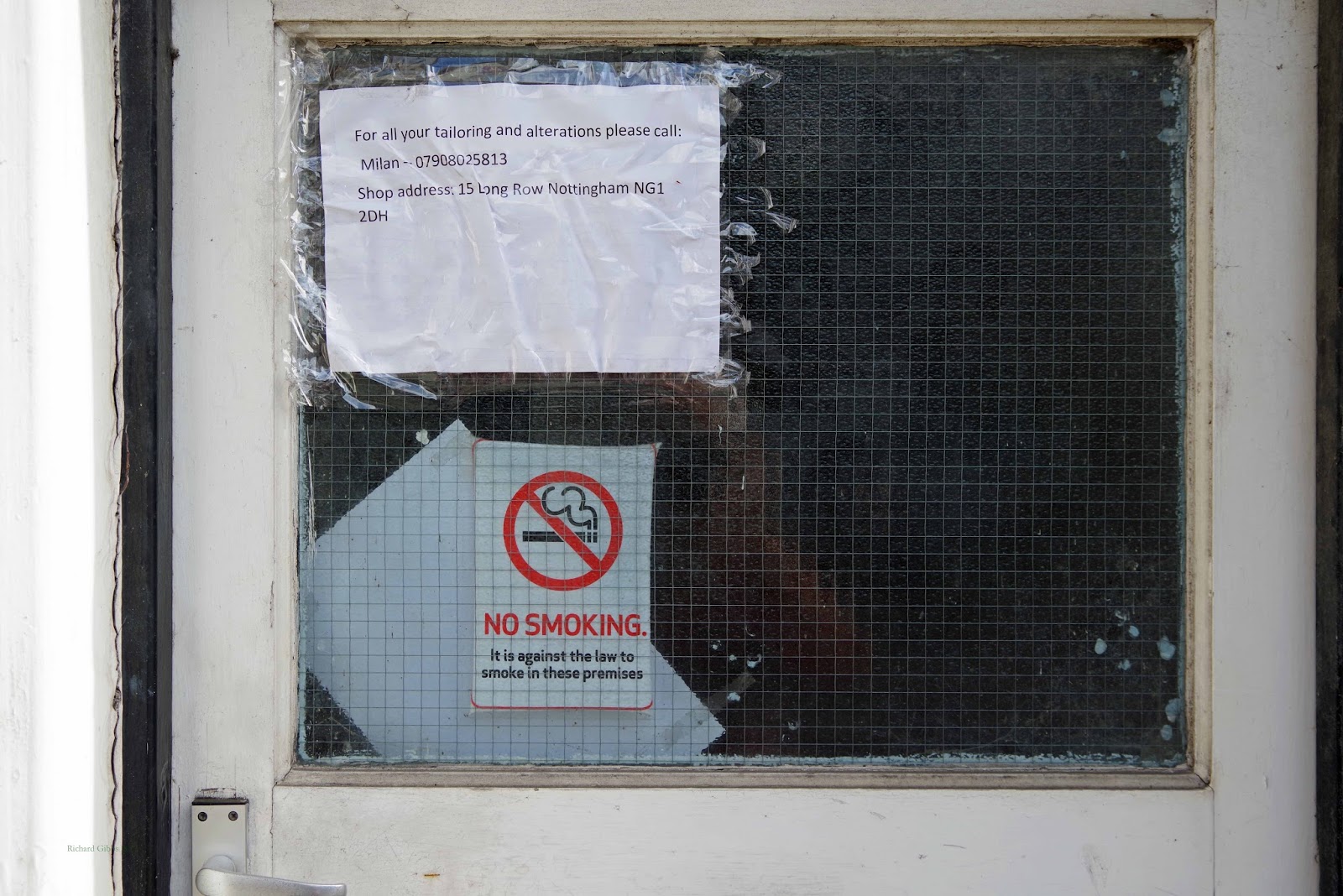 the elegance of the Lace Market is gashed with half-finished repair work. 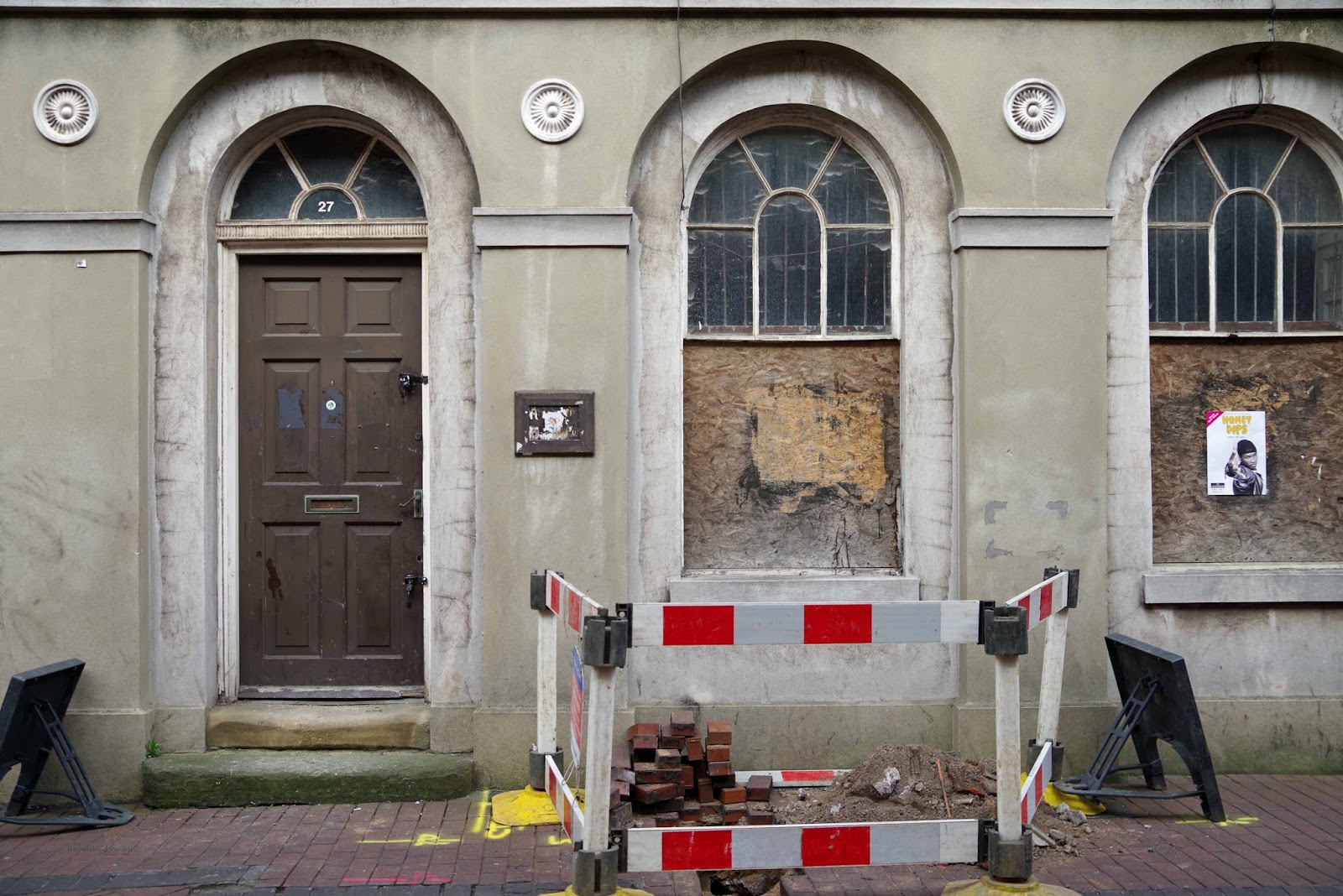 In the Newshouse I read the local paper. 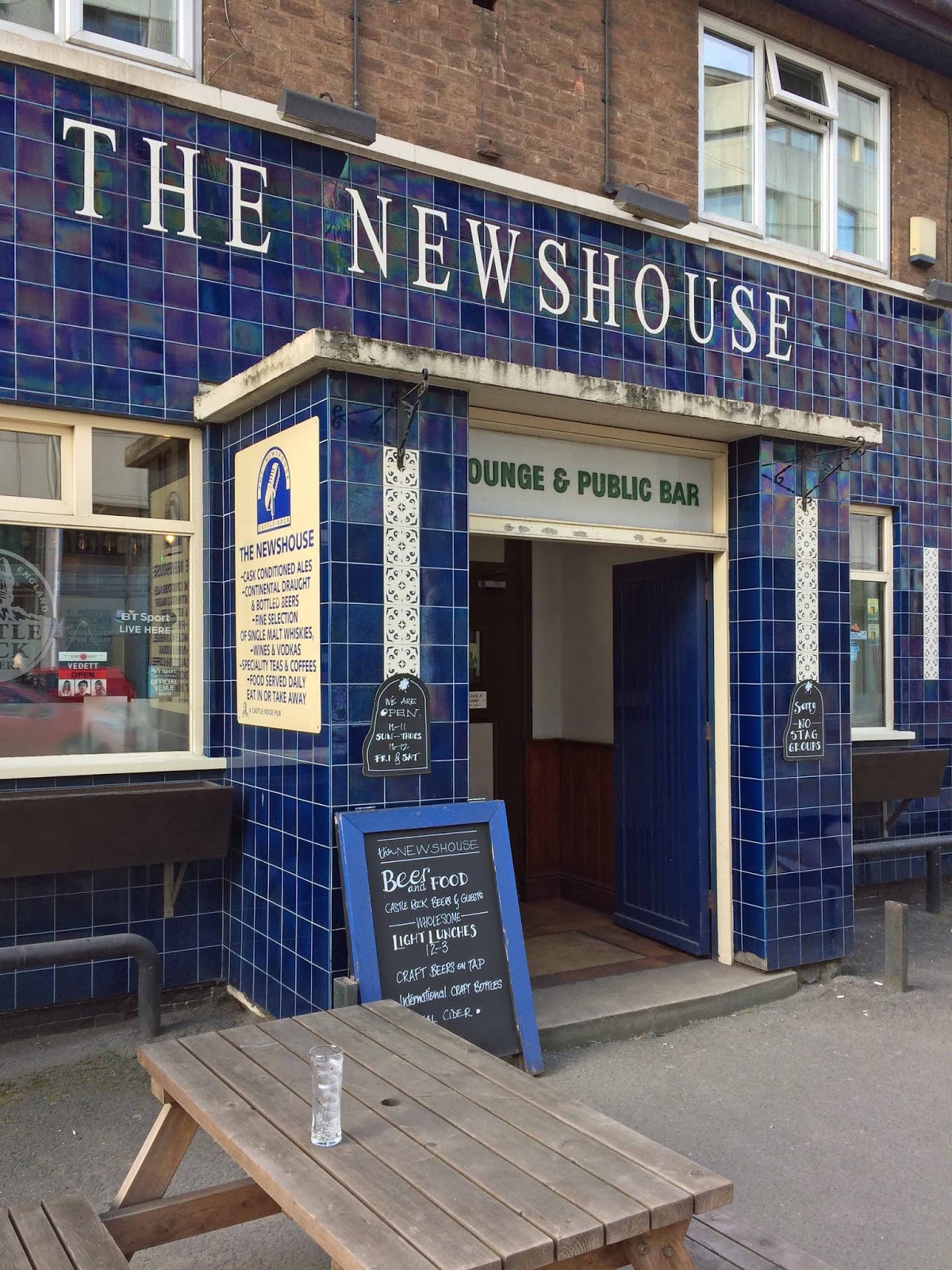 A couple of articles stand out.  One is headlined, Drink-driving teacher is banned from classroom after school crash.  This tells of how a 53-year-old teacher, two and a half times over the limit, reversed into a colleague’s vehicle at the end of a school day.  The case doesn’t look good:  allegations include that she: (a) consumed alcohol, prior to attending the school premises and/or on the school premises; (b) slept in another room in the school’s premises while she was responsible for teaching a class; and (c) took and/or stored alcohol on the school’s premises.  The report states that she consumed large amounts of alcohol on a Tuesday night and then, when she arrived at work the next day she consumed at least two and a half more glasses of alcohol. And if that were not sufficient, having been found asleep in the maths office, she consumed yet more alcohol from a plastic bottle in her handbag at the end of the day before colliding with her colleague’s car. 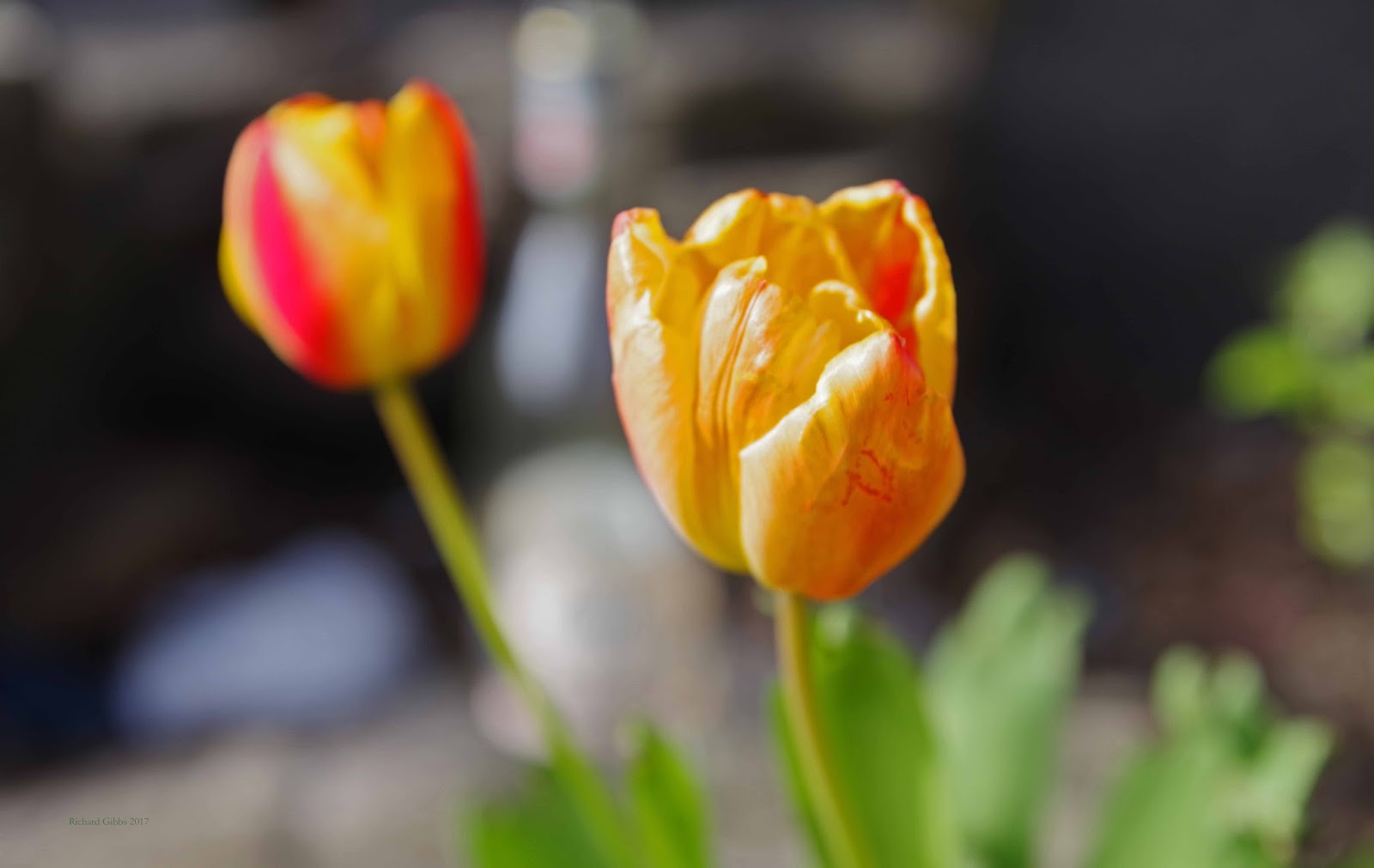 The other article, ‘Reckless night out’ costs man £2,805 in court, tells the story of how Drunk Conall Kenton back-heeled a £2,500 takeaway shop window.  The incident happened at 2.30am on on March 25th. 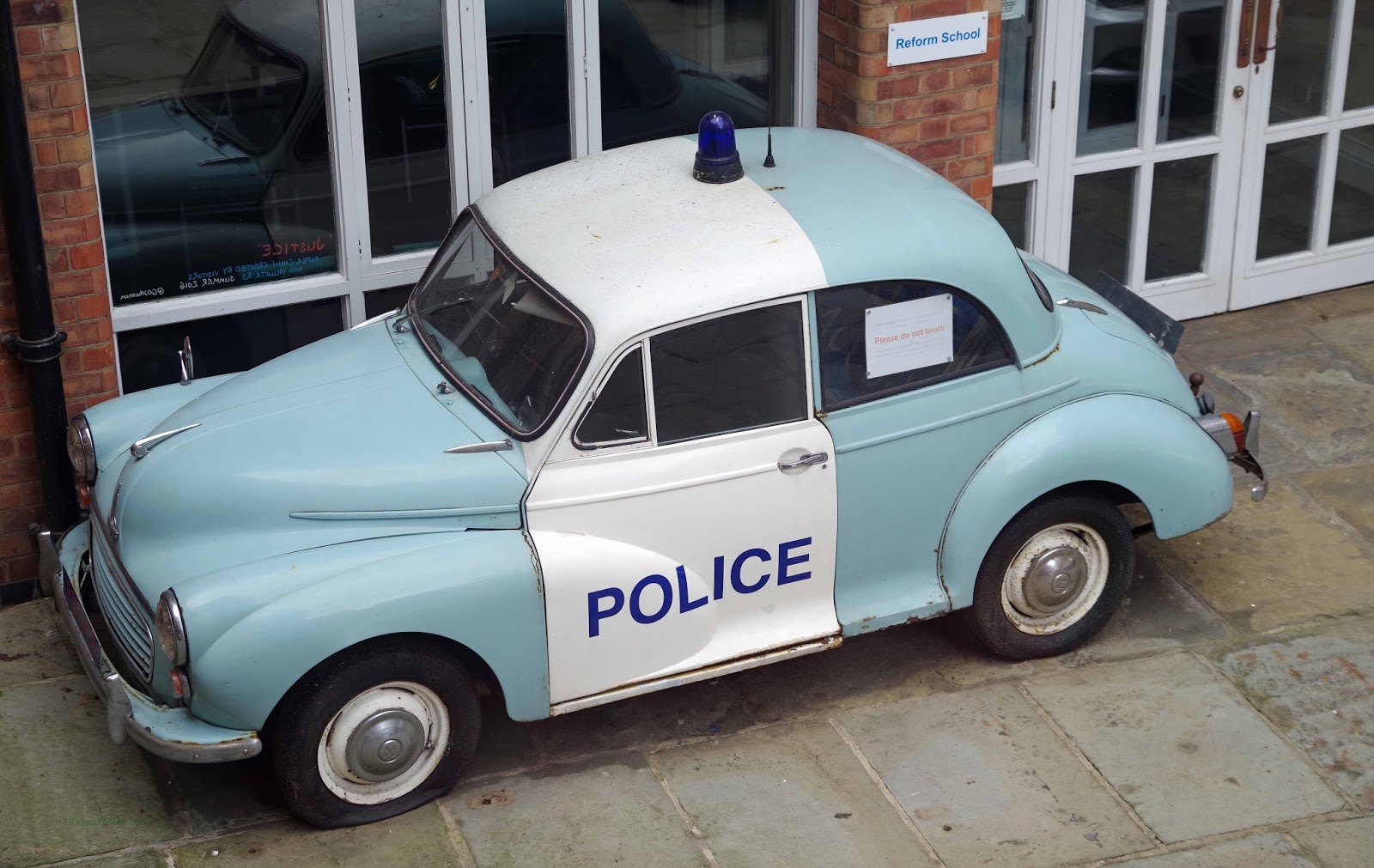 Police arrived and arrested the twenty-year old, who, said it was because of the alcohol he had drunk and the fact that he was angry….  So there still are angry young men in .  I sip a modest pint in Ye Olde Trip to Jerusalem with mild-mannered, middle-aged tourists, and then wend my way, carefully, to the Jubilee Campus to ponder on the passage of time. 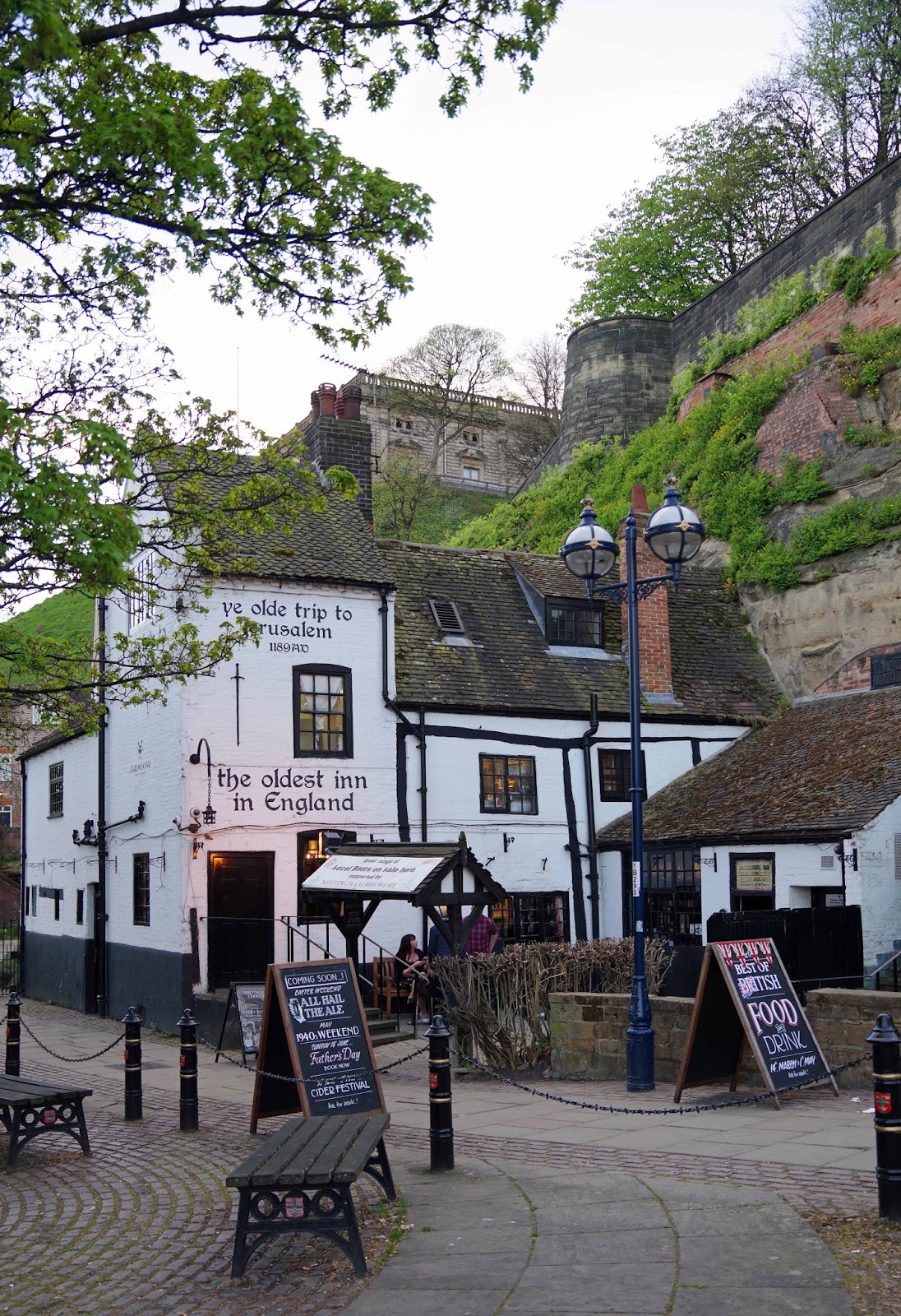 In my dreams I pedal my green Raleigh bicycle with Sturmey Archer four-speed internal gearbox and Brook’s saddle (one of the very ones Alan Sillitoe worked on in the 1950s) across fields of lace, but the ash from my cigarette sets the papery doilies alight and I am scorched, so need to acquire 35 grams of Boots Pharmaceuticals Calamine & Glycerin Cream.  The heat and pedaling has made me thirsty so I stop at the Vat and Fiddle for a pint of Castle Rock Sheriff’s Tipple but am arrested and dragged to the futuristic HMRC buildings in Castle Meadow, where I am quickly found guilty of a misdemeanour in my accounting and am condemned to be a guide in the Tigguo Cobauc (as Snotingaham’s City of Caves was once called) for eternity, or until Notts County FC win the FA Cup again (or whichever is the sooner)….. 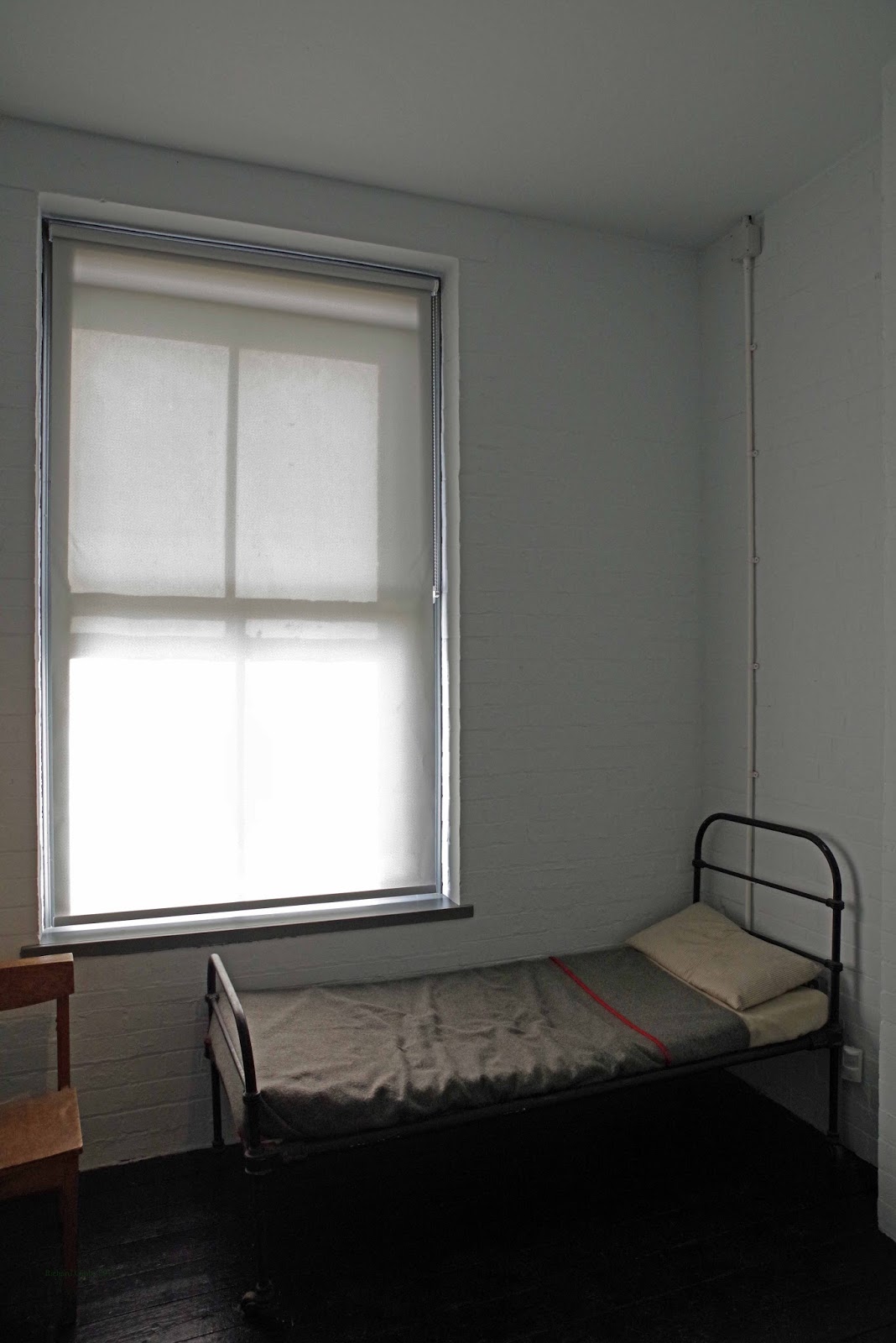 I wake up screaming, I’m me, and nobody else; and whatever people think I am, that’s what I’m not, because they don’t know a bloody thing about me…..

There’s a knock at the door.  The chambermaid tells me to stop shouting.  She doesn’t care who I am, but the Woodland Trust Conference begins in ten minutes…… 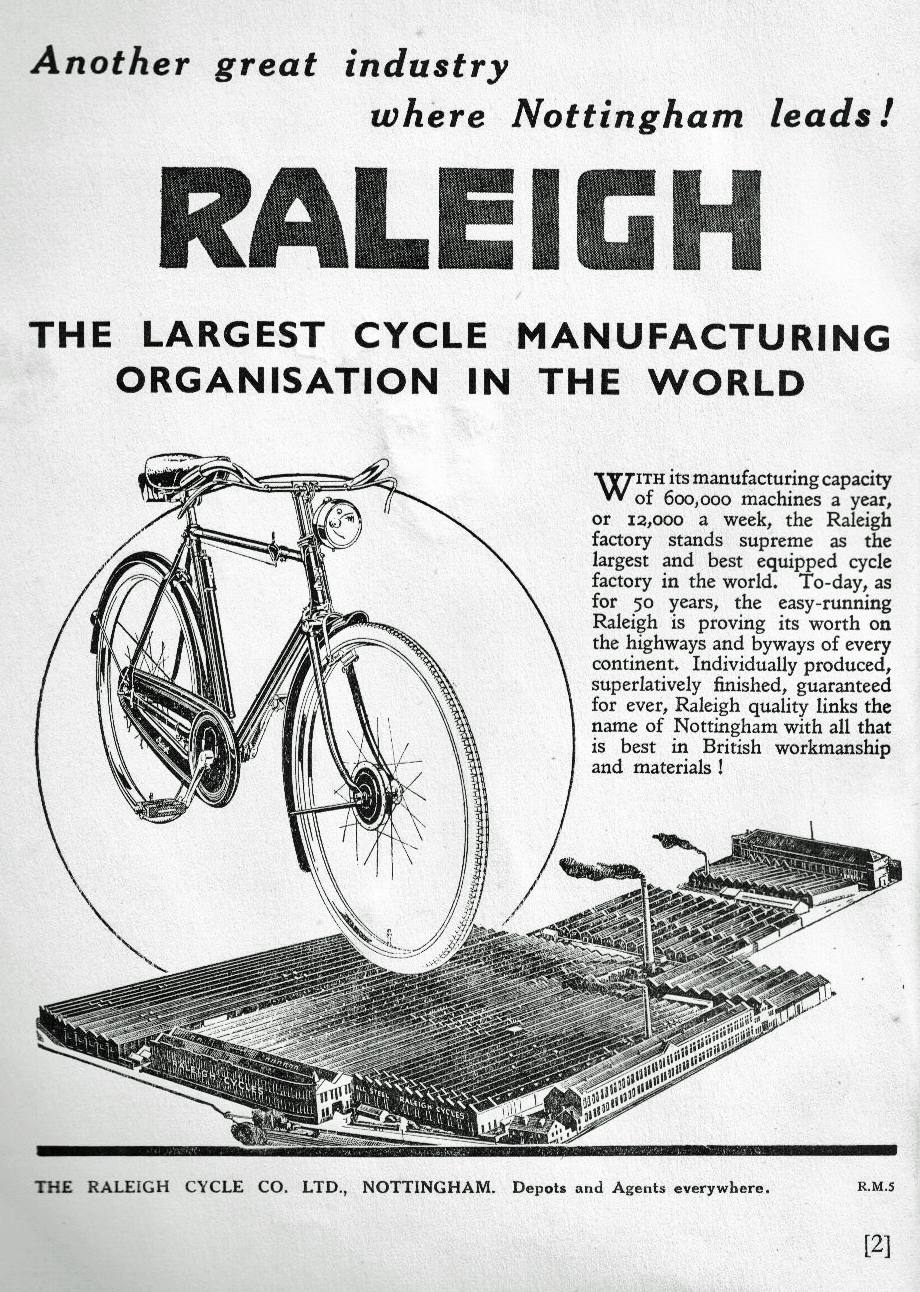 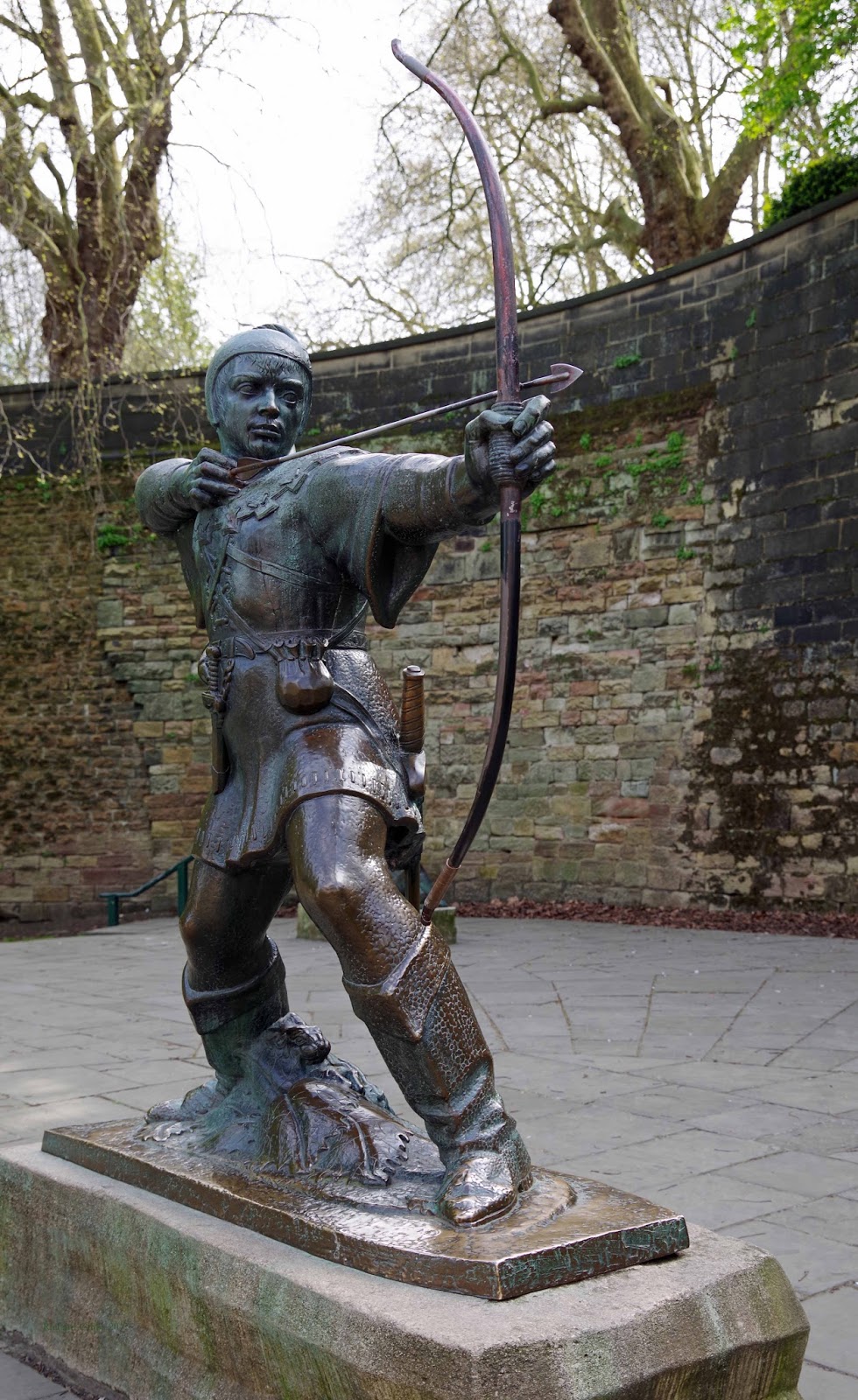 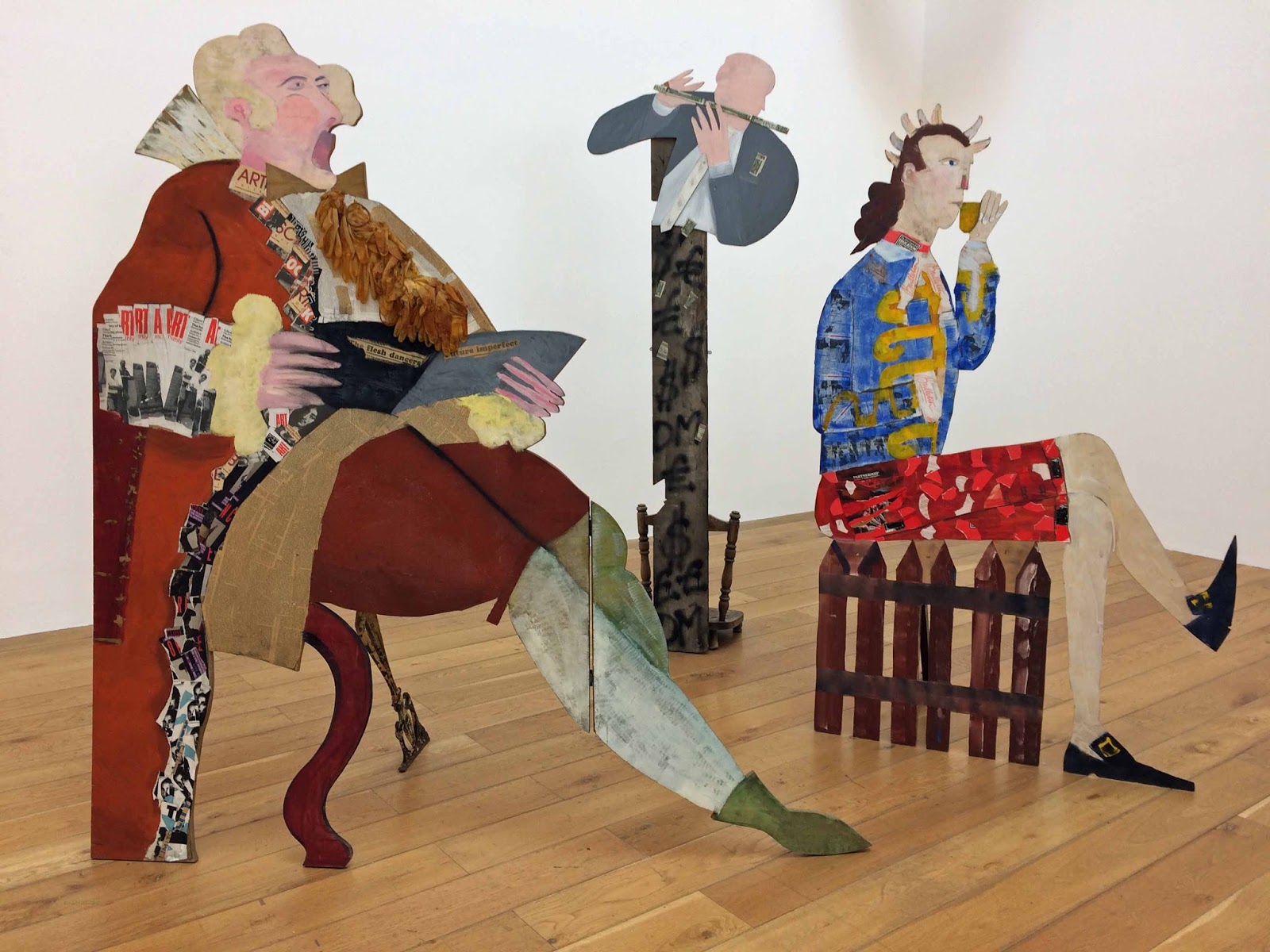