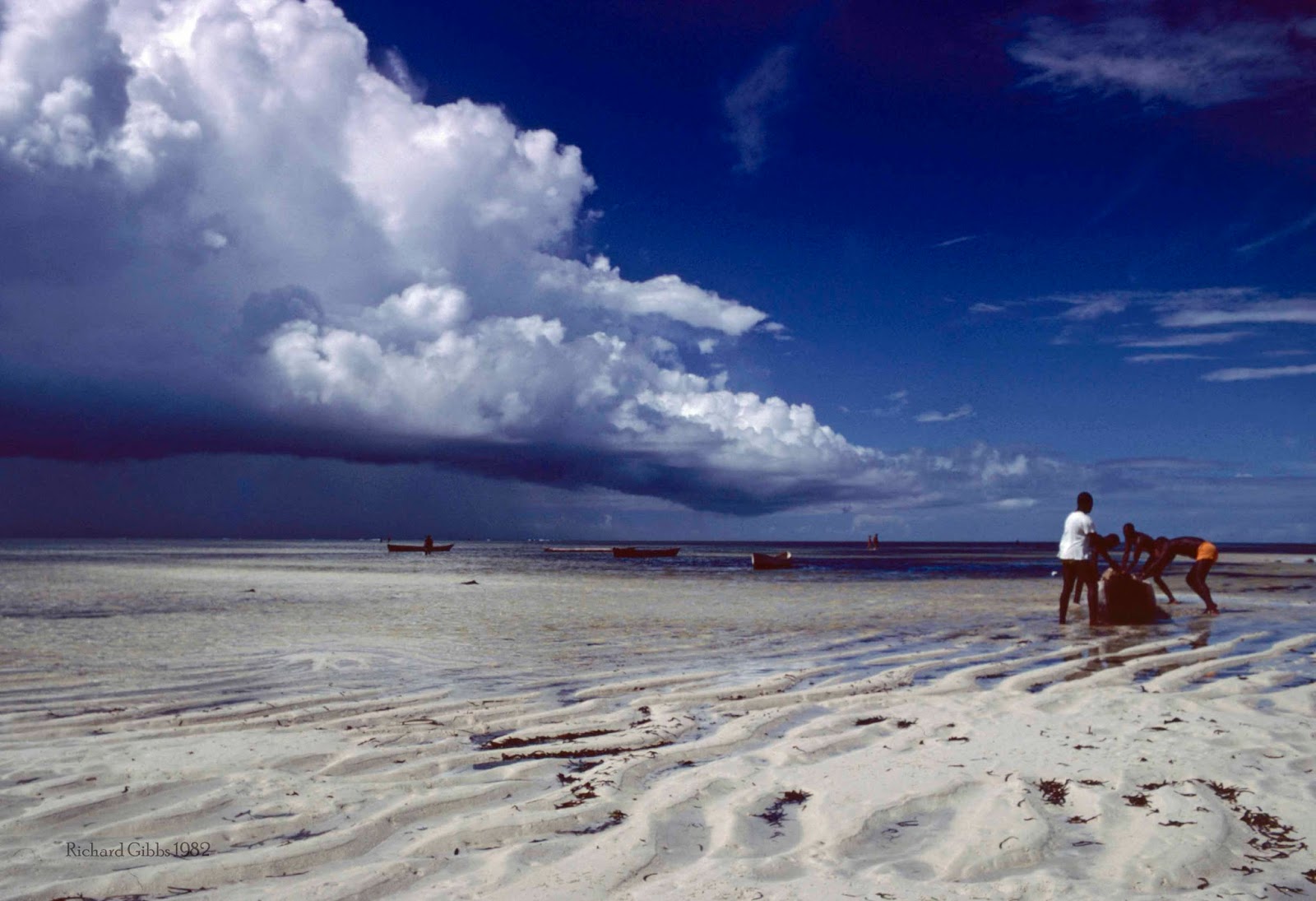 Christopher drives us into for the train, and we just make it to the top of the for a quick drink and a glimpse of a splendid sunset.  Mt is just visible to one side, and Kilimanjaro to the other, and tumbling storm clouds blaze in the declining sun.

The train, The Lunatic Express[i], is ready for us, and we only have two companions in the compartment – Italian brothers going for some spear-fishing and sun.

Michael and I have beer and then a substantial roast lamb supper in the dining car at 9.30, for fifty shillings[ii]: starched linen napkins, silver service and fine crockery.  As much as you can eat, and very tasty.  Over the door a sign: No liquor served after 10.00pm except in case of illness…..

Early morning up and watching interminable thorn scrub rumble past.  A light breakfast and a slow run in to , the last few of 530 kilometres, descending over 1,600 metres to sea level.  The station is not far from the Manor Hotel, built in 1901.  It is Easter Sunday and since our rooms aren’t ready yet we attend the Anglican Cathedral unchanged and unwashed.

Not long after, having spruced up a bit, we settle for Lobster Thermidor and two bottles of French Graves for Easter Lunch, followed by a siesta.  Then we walk down to , the sight in .  Italian design, but Portuguese for much of its history.  An impressive bastion, rising out of the coral of the island, with a bloody past and an evocative present.

A very hot day.  A walk before breakfast, discovering the cemetery, where there are some puzzling dates on English Servicemen’s graves – some wartime, but others between the wars.  The heat? 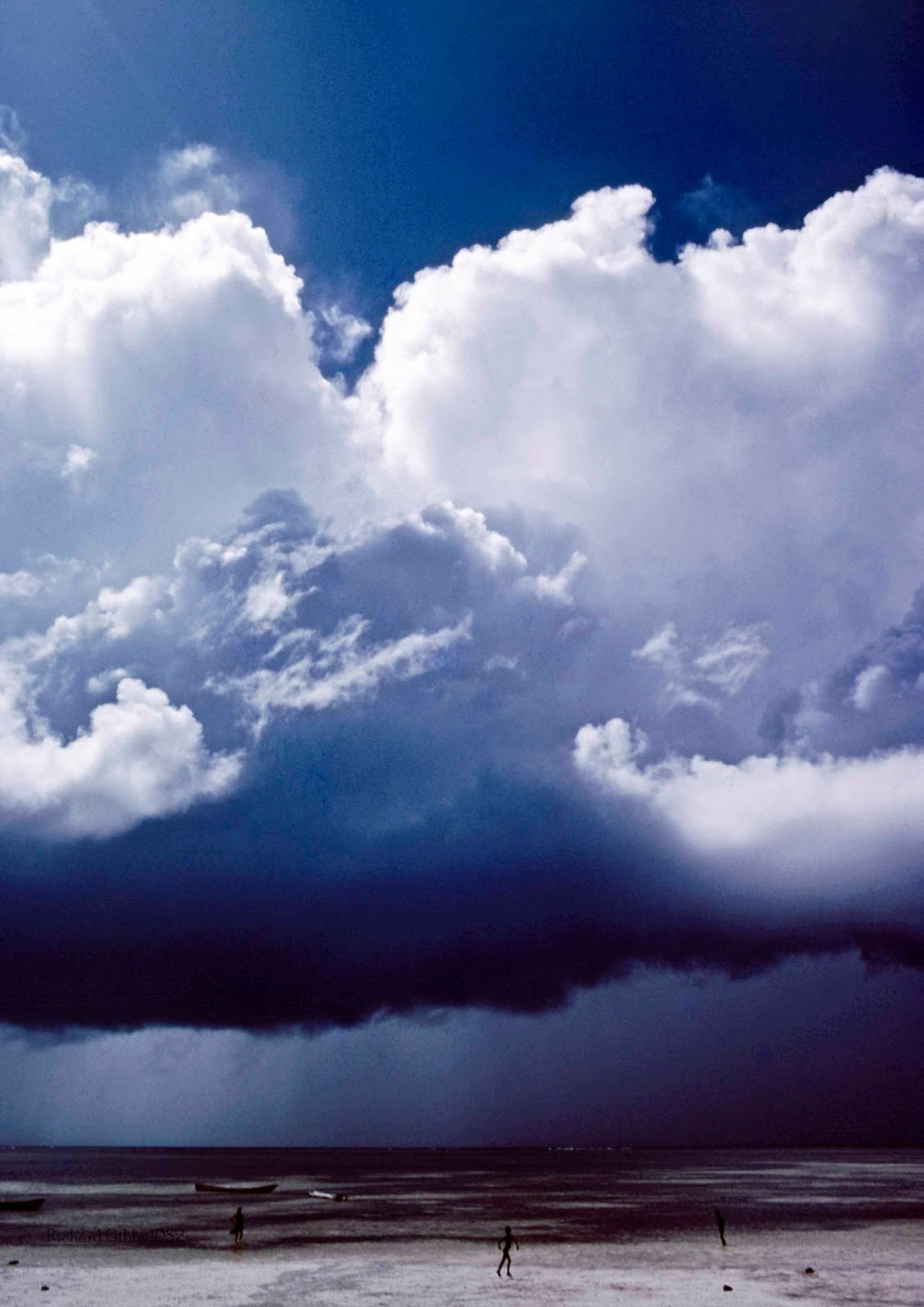 Later we take the Likoni[iii] Ferry and then walk down to Shelly Beach[iv], which is a little disappointing.  With the tide out, the reef encloses little here but shallow pools and so swimming is difficult.  Also there is a terrific storm on the horizon, so we take refuge in the Shelly Beach Hotel Bar for a while until the rain passes.

My diary splutters to a halt here, red with sunburn and mosquito bites. I remember buying colourful kikoys and kangas in the bazaar, one of which I am sitting on right now; and wandering around the old town of Mombasa, which I now believe is sadly run down (it was hardly spic and span back then!)  We took the train back to , then, having said our goodbyes to Flying Doctors and other friends, with a last G & T under the pepper trees we flew home (to ). 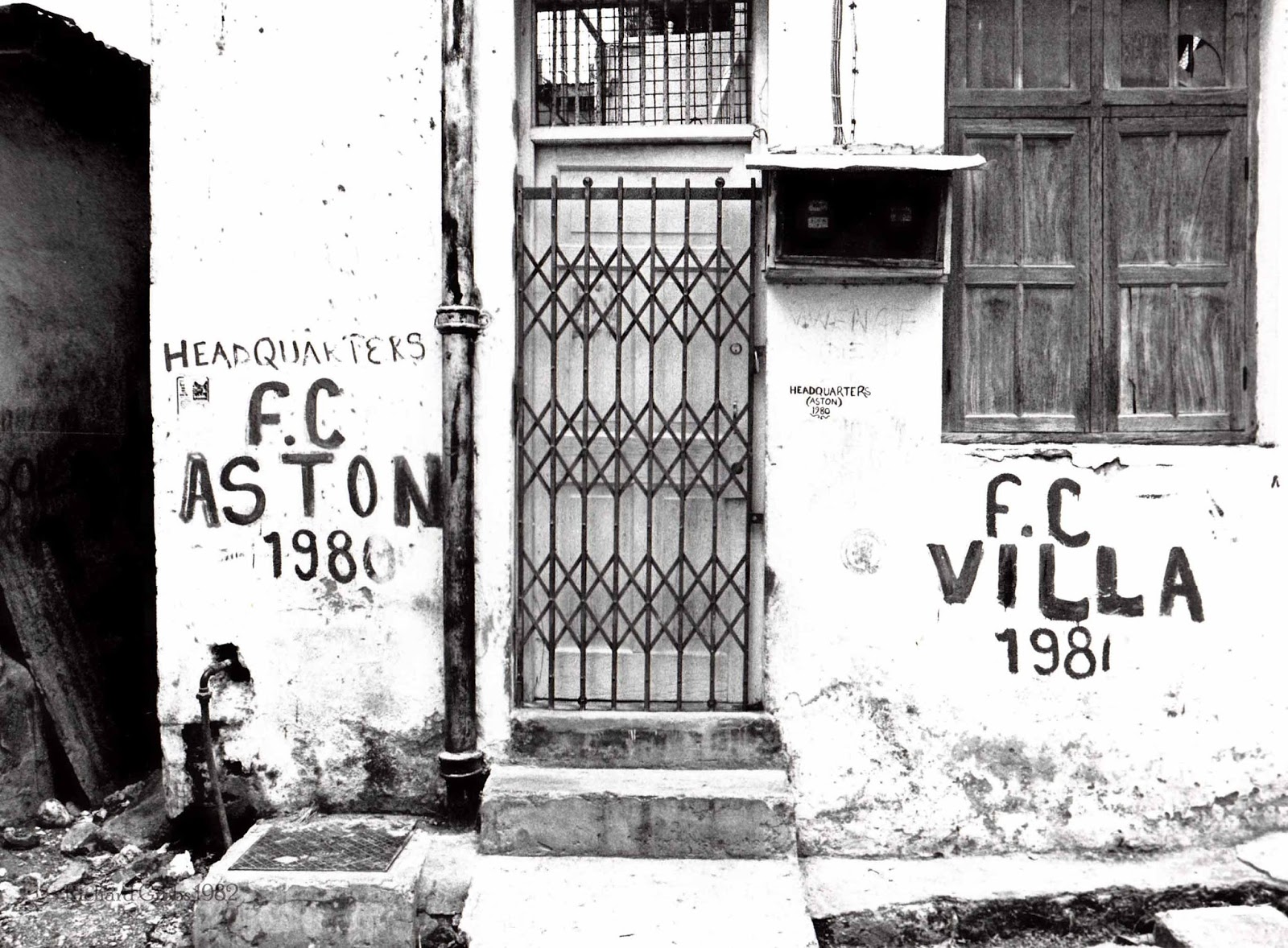 I do not remember feeling at risk at any time during this trip, either in the north or at the sea.  Perhaps I was naïve, though things may well have changed. The following was posted online by the US State Department on January 13th 2017 (by the Obama Administration):

The Department of State warns citizens to avoid travel to the border area between and because of threats by the terrorist group al-Shabaab.   citizens should also be aware of potential terrorist threats and the high risk of crime throughout the country.

For your safety:
In 2016, terrorist attacks involving shootings, grenades, or other explosive devices resulted in 122 fatalities. The bulk of these incidents occurred in Wajir, Garissa, Lamu and Mandera counties. Potential terrorist threats remain in , including within the area, along the coast, and within the northeastern region of the country.

Terrorist targets have included Kenyan and foreign government sites, police stations and vehicles, hotels, public transportation and other infrastructure targets, nightclubs and bars, religious and academic institutions, and shopping areas. On September 11, 2016, press accounts noted that three women purportedly attacked a police station in with knives and petrol bombs, wounding two Kenyan police officers.
The next month, on October 27, 2016, an assailant with a knife attacked a police officer guarding the Embassy compound.

Violent and sometimes fatal crimes, including armed carjackings, muggings, home invasions and burglaries, and kidnappings can occur at any time. citizens and Embassy employees have been victims of such crimes in the past.

There is a heightened threat of terrorist attacks in and the coast and resort areas of and Malindi. The Inspector General of the Kenyan Police has called on the public to adopt a higher level of vigilance and report any suspicious people or activity straight away. See Terrorism.

In May and June 2016 political protests in Kisumu turned violent. Further political protests in , Kisumu and other parts of may occur in the lead up to August 2017 elections. You should take care in public places where people gather, and exercise a heightened level of vigilance. Monitor local and international media and keep up to date with this travel advice by subscribing to email alerts.


In 1980, only two years before our visit, the hotel in was bombed, killing 20 people and injuring 87.  When we were in in 1982, I noted that many of the villas near the Ngong Hills had armed guards on their gates.  In February 1984 the Wagalla massacre was a massacre of ethnic Somalis by Kenyan security forces in . The Wagalla massacre took place at the Wagalla Airstrip. The facility is situated approximately 15 km (9 mi) west of the county capital of Wajir in the , a region primarily inhabited by ethnic Somalis. Kenyan troops had descended on the area to reportedly help diffuse clan-related conflict. However, according to eye-witness testimony, about 5,000 Somali men were then taken to an airstrip and prevented from accessing water and food for five days before being executed by Kenyan soldiers.  In 1998, the embassy in was bombed, with 213 fatalities. In 2002 the Paradise hotel in was bombed with 13 deaths (and at the same time two commercial jets were targeted with rockets). In 2013, the militant group Al-Shabaab killed 67 people at 's Westgate Shopping Mall.

There have also been numerous lesser attacks, but is less safe now than it ever was?  Is the world a worse place now than it used to be? Alternative facts, such as Trump's claim that the US murder rate is higher than it has ever been, can be clearly and cleanly disproved.  The biggest changes between the Kenya I experienced and now are probably, firstly, that everyone, from children in thorn huts to fishermen on the beach, will have at least one mobile phone; and, secondly, where my warriors in the bush had spears, many of them will now have guns, thoughtfully provided by arms manufacturers, some of whom are smiling in their luxury homes at this very moment.

But there are other factors in safety, apart from the global threat of terrorism. Malaria is making a comeback, with some of the ‘traditional’ prophylactics no longer having the desired effect; and, just in case you were thinking of following in my footsteps, you will find that the Lake Baringo Club is, at the time of writing, closed, due to floods…..

The road of excess may lead to the palace of wisdom, but when (if) you get there, the palace may be closed!

If ever they remembered their life in this world it was as one remembers a dream.

C.S. Lewis, The Lion, the Witch and the Wardrobe

[i] The Nairobi-Mombasa railway was then a section of the line from to the , built at the end of the 19th century by the British.  At the time of my visit it was still a viable route, though perhaps clothed in a certain decadence. It took twelve hours each way, but now can be fourteen hours or more….. Some time after, not because of, our usage, the line was closed for a lengthy refurbishment, though later reports hardly corroborated this.

The line, which is narrow gauge, has been hit by accident. In 1993, 114 people died when a train bound for drove into a river, the tracks having been washed away by rain. In 1999, 32 passengers perished when the brakes on another train failed and it derailed.

A few years ago I listened to a programme on the radio about the Lunatic Line -  so called because of the costs in building it and because of the deaths that resulted from the construction. The story is a complex one: imperial aspiration and inefficiency and corruption.  Once it employed 48,000 people, now it has less than 4,000 employees.  Once it was like a prestigious civil service; now it is a strange vestige of its former self, upstaged by air transport, air-conditioned 4 x 4s and even long-distance buses.

Now, however, there is a $13.8bn rail project, which began last December, designed to link ’s Indian Ocean of to the capital , then on to . It is part of a package of deals signed between and in 2013…..

The existing narrow-gauge railway was built by the British at the turn of last century and was nicknamed the Lunatic Express, in part because workers constructing it were eaten by lions. The old line does not cut through ’s game park but it does pierce the Tsavo national park.

The standard-gauge line will be built in a fairly remote stretch of the park and Leakey said it was unlikely it would have any impact on the number of visitors to one of ’s top attractions.

[iii] In late 1997 six policemen were killed when local raiders armed with traditional weapons and guns rampaged through Likoni. A police station and outpost were destroyed, along with market stalls and offices. Many non-local Kenyans were either killed or maimed, as the raiders targeted the Luo, Luhya, Kamba and Kikuyu communities. In unrest that followed an inquiry into this incident it is estimated that 10 policemen and 37 others were killed.

[iv] In 2011 Liz T, from , posted a warning on Trip Advisor about Shelly Beach. She and two companions were robbed of everything and risked their lives when they innocently went there to swim and sunbathe. She also mentions an Italian tourist who was slashed across his upper body by a thief who took his camera. Liz T reports that the place never recovered from the 1997 riots which is why it was deserted and why hotels there were derelict or for sale.