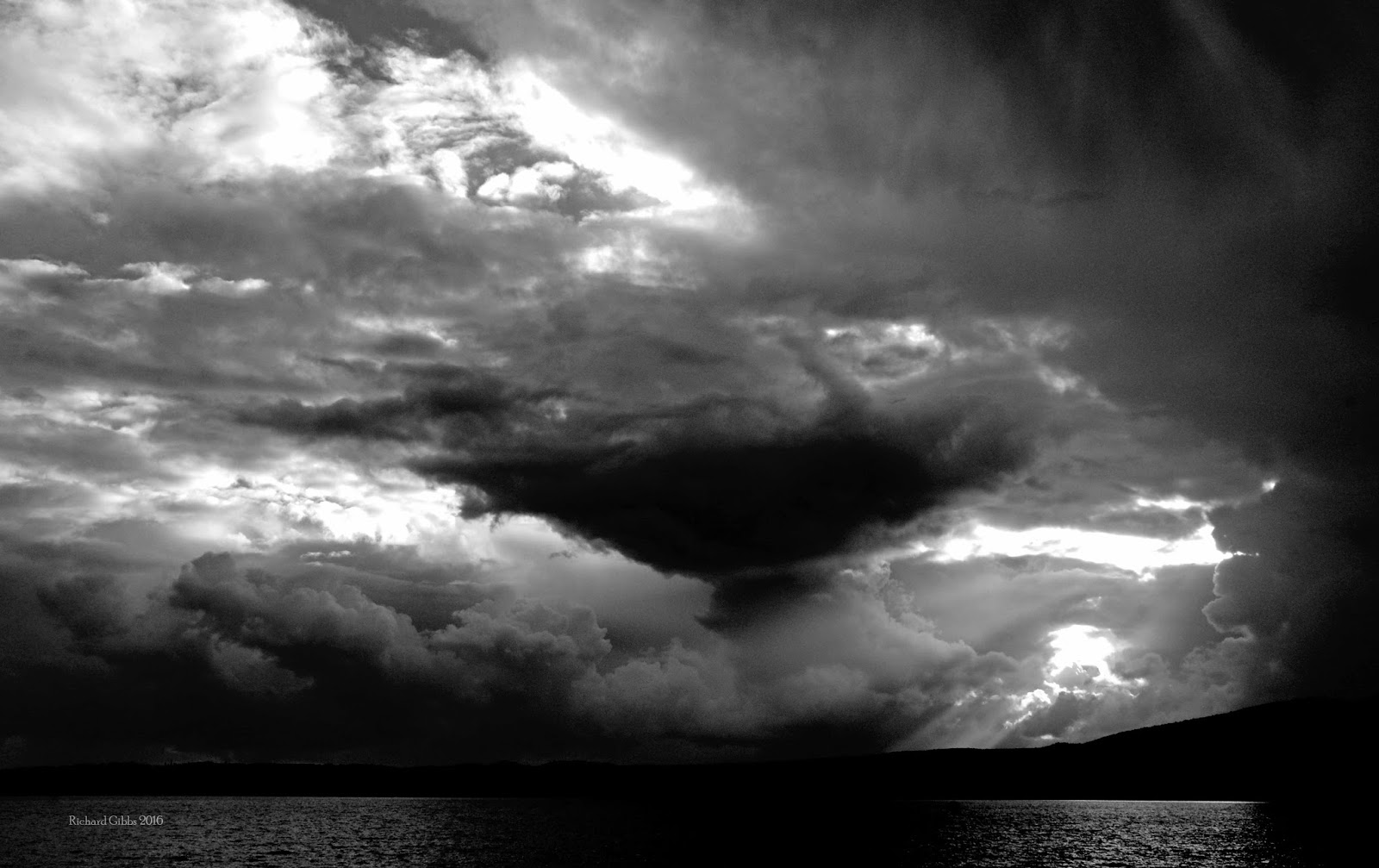 Dark storm clouds pile over though the evening sun still slants through and shimmers on the lake.  I step onto the rocks by the Trevignano promenade to get a better shot.  Then, gravity fails, and I miss my footing, falling back heavily on the angular blocks.  For a crazy moment my thoughts swirl around protecting the camera, the fact that my umbrella is bent and the annoyance that I hit my left elbow in breaking my fall.

A few minutes later I remove my jacket and cool water from a drinking fountain washes away the blood, and helps reduce the ugly swelling that has appeared.  I bind the wound with my handkerchief, replace my jacket, and gingerly proceed.

We are due to meet our 104-year-old friend, Truman, and indeed we join him for his habitual Jack Daniels #7, but, despite his invitation to dinner, I am too shaken to accept and we sadly retreat to our accommodation.  What irony that it is my frailty, and not the centenarian’s, that intervenes?

I think, in retrospect, that I would have been less concerned had I not just driven 1,500 miles to our erstwhile home in , and that consequently there was a long road home…….  A damaged arm does not fit well with days at the wheel……

However, it had all started well, with a smooth run down to Dover, the lounge aboard the P & O Ferry providing champagne, and then a clear motorway out of Calais (not looking so good on the way in – police vans all over the place, great gashes in the razor fences, and two massive hauliers blocking the incoming traffic).  Irony sometimes comes in bundles, and I muddle over the facts that thousands are camping here, desperate to enter Britain, while we are speeding away, confused by Brexit, wishing it wouldn’t happen, cursing the misleaders and faced with at least 10% if not much more on the cost of this fugue because of the fallen pound.  Not that we aren’t excited.  The road south, the road to the sun.  Term time, and we are free! 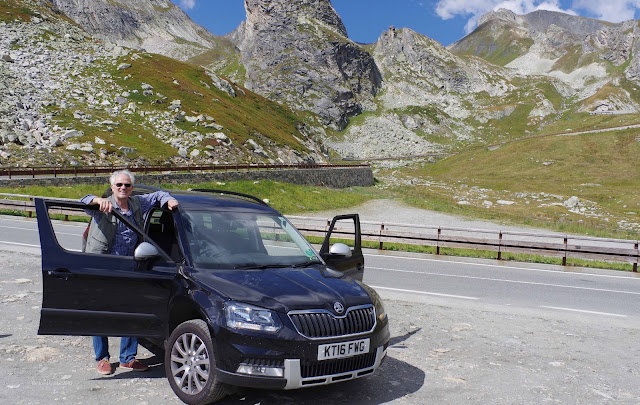 However, it is a theme of this trip that we pass through six countries and everywhere, when asked where we are from, we feel shame in saying England, shame because we are now seen to be ungrateful for Europe - arrogant, selfish Brexiteers (whichever way we personally voted makes no odds to the people we appear to shun).  I want to apologise; to say it is all a dream, a mistake, and that we love being in and that we strongly believe that unity is right.  But it is won’t work.  The damage is done.  I fell and my arm hurts; no wishing my stupidity hadn’t happened makes a difference. 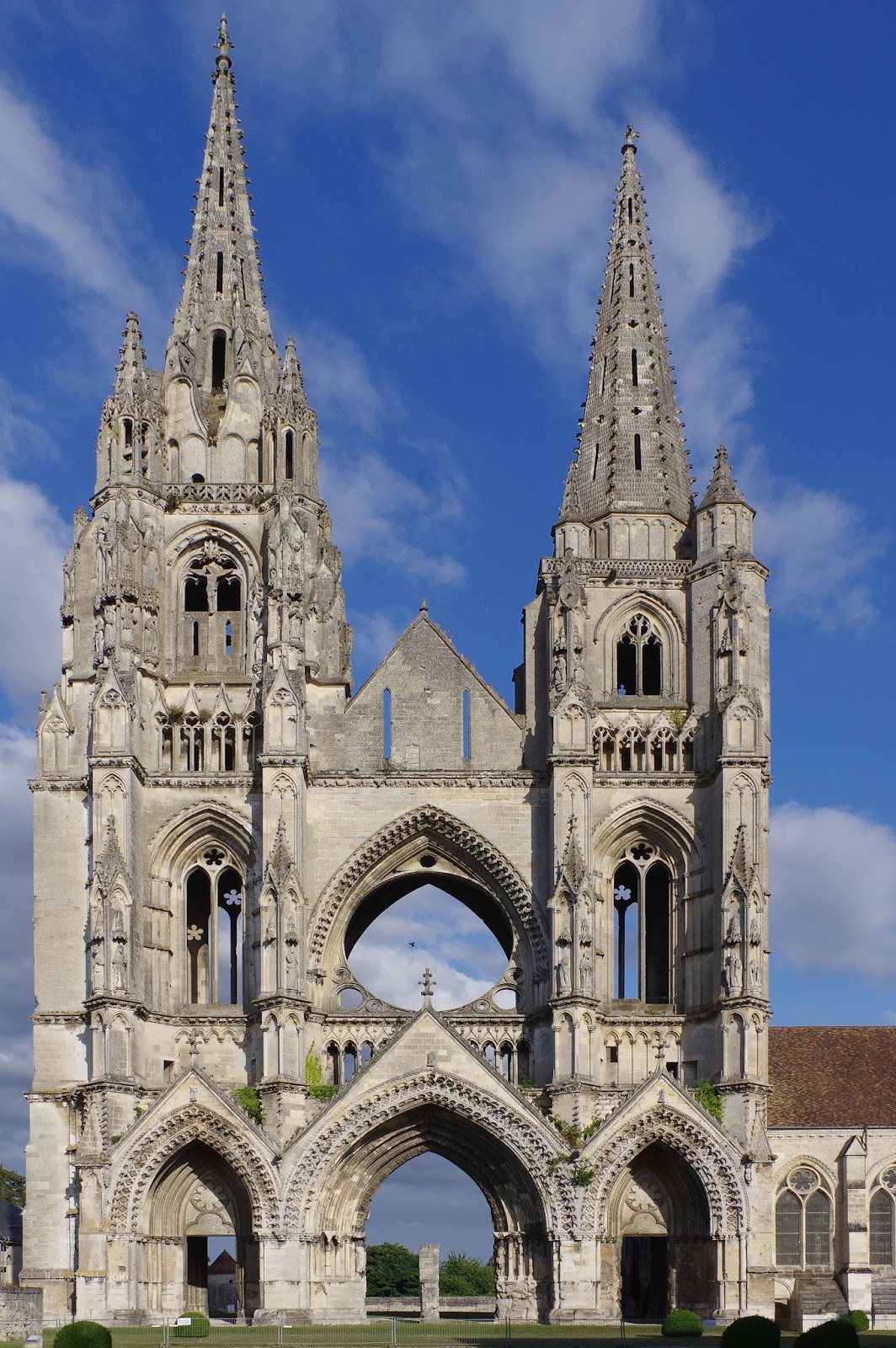 Anyway, the road south.  Into the sun.  We spend the first night on a farm near , chosen so we could see the ruins of the eleventh century Abbey of des Vignes, one of the richest abbeys of medieval . The two unequal towers of the west front still leap seventy metres heavenwards, despite the destruction of much of the rest of the complex under Napoleon I.

In the morning, we leave the village, passing a shaded war cemetery, reminding us that peace was gained the hard way.  We then follow the Chemin des Dames, passing the site where 12,000 died on March 7th 1814 when Napoleon underestimated his Russian adversary. 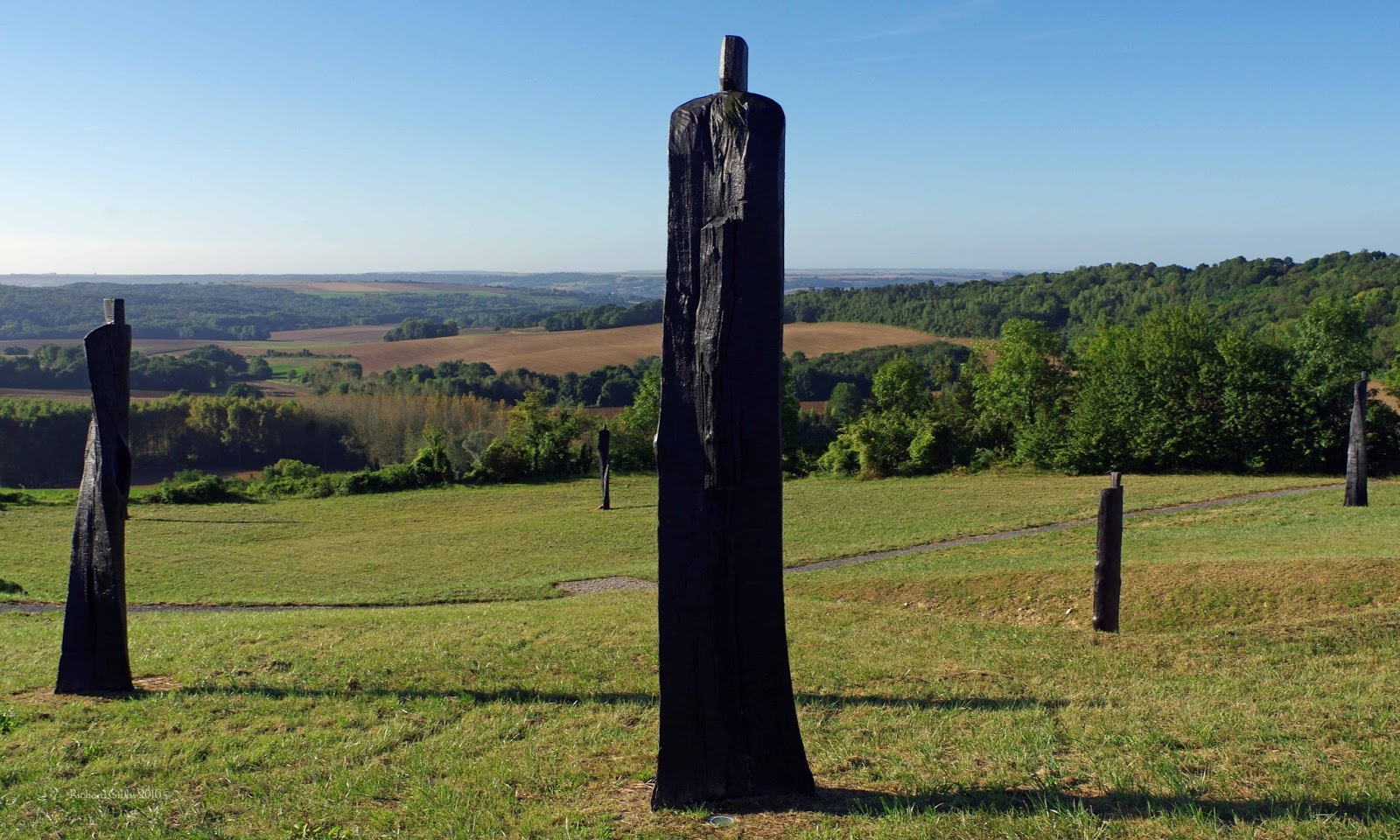 In March 1914, to commemorate the centenary of the of Craonne a memorial was unveiled near Hurtebise Farm.  Only months later, this was destroyed during fierce fighting.

A little further along the 30 km ridge we stop at the Monument des Basques, which was raised in 1928 to commemorate the losses of young men from the south-west of France, members of the 36th Infantry Division, who died here in a number of conflicts between 1914 and 1918. 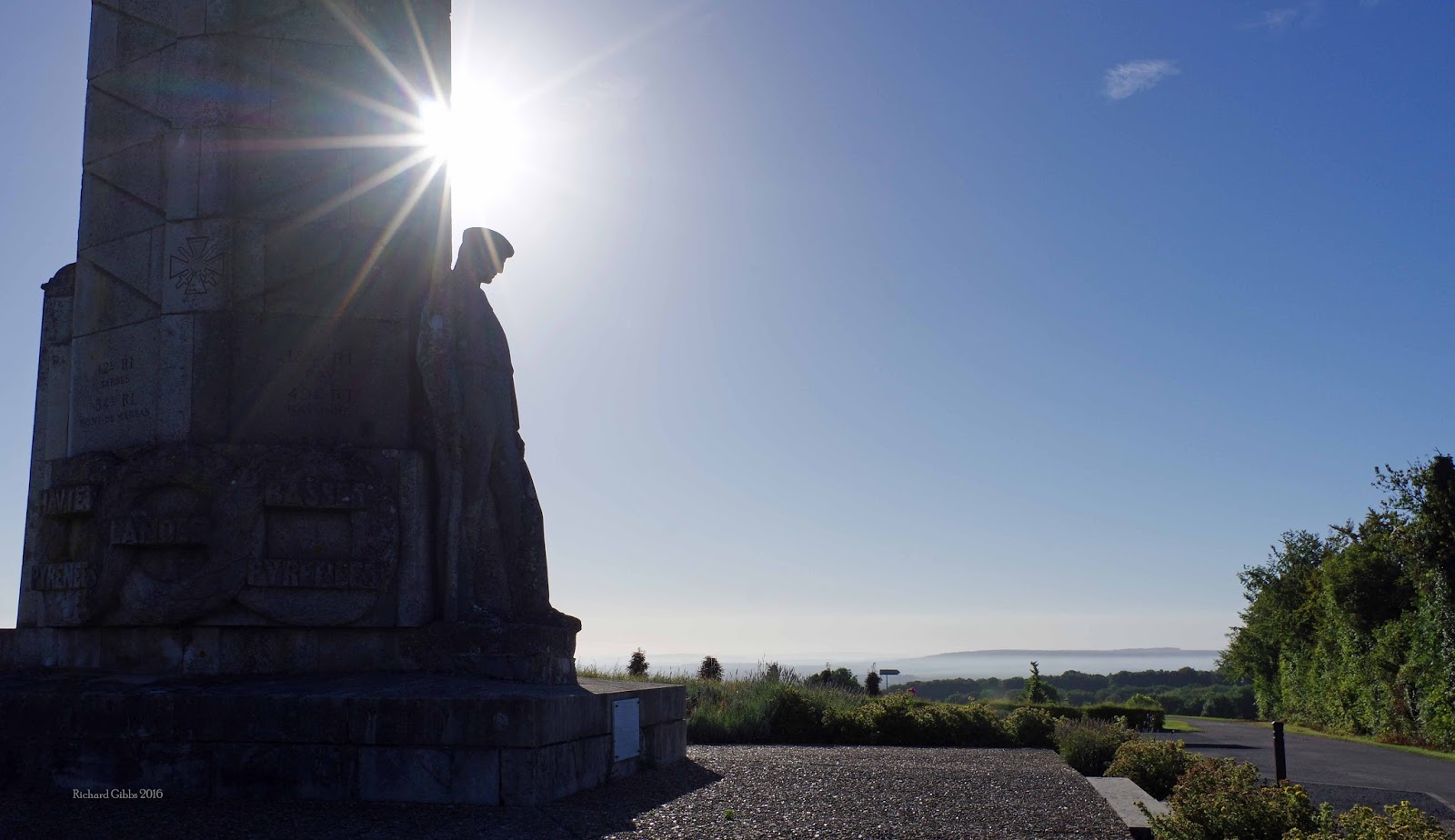 Our second night is spent in the Jura.  My plan had been to limit the driving to about four hours or so a day, and to explore places we had not visited before. 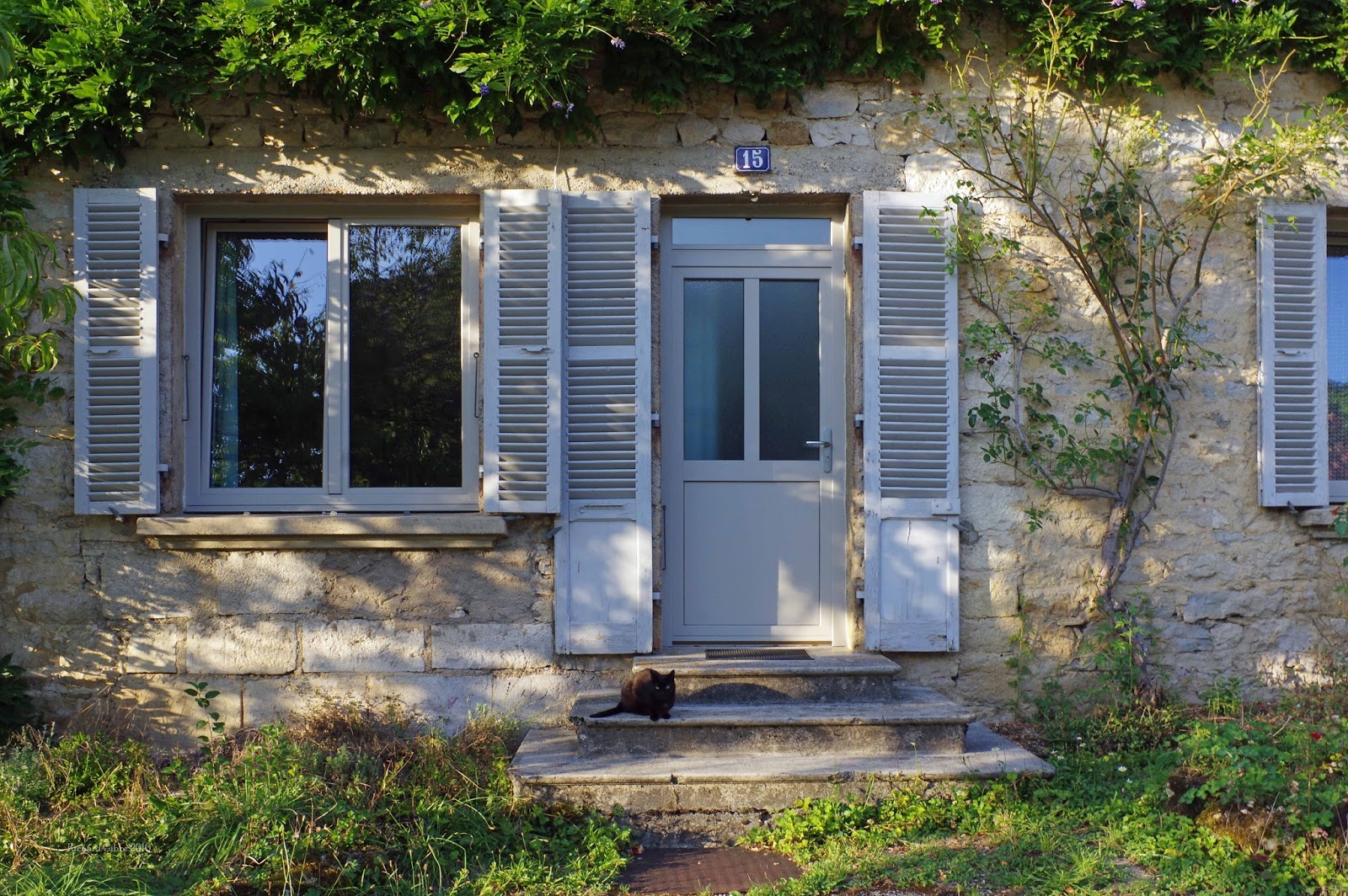 Here we are in walking country, and an excursion to where the river Lison issues from a massive limestone cliff does not disappoint. 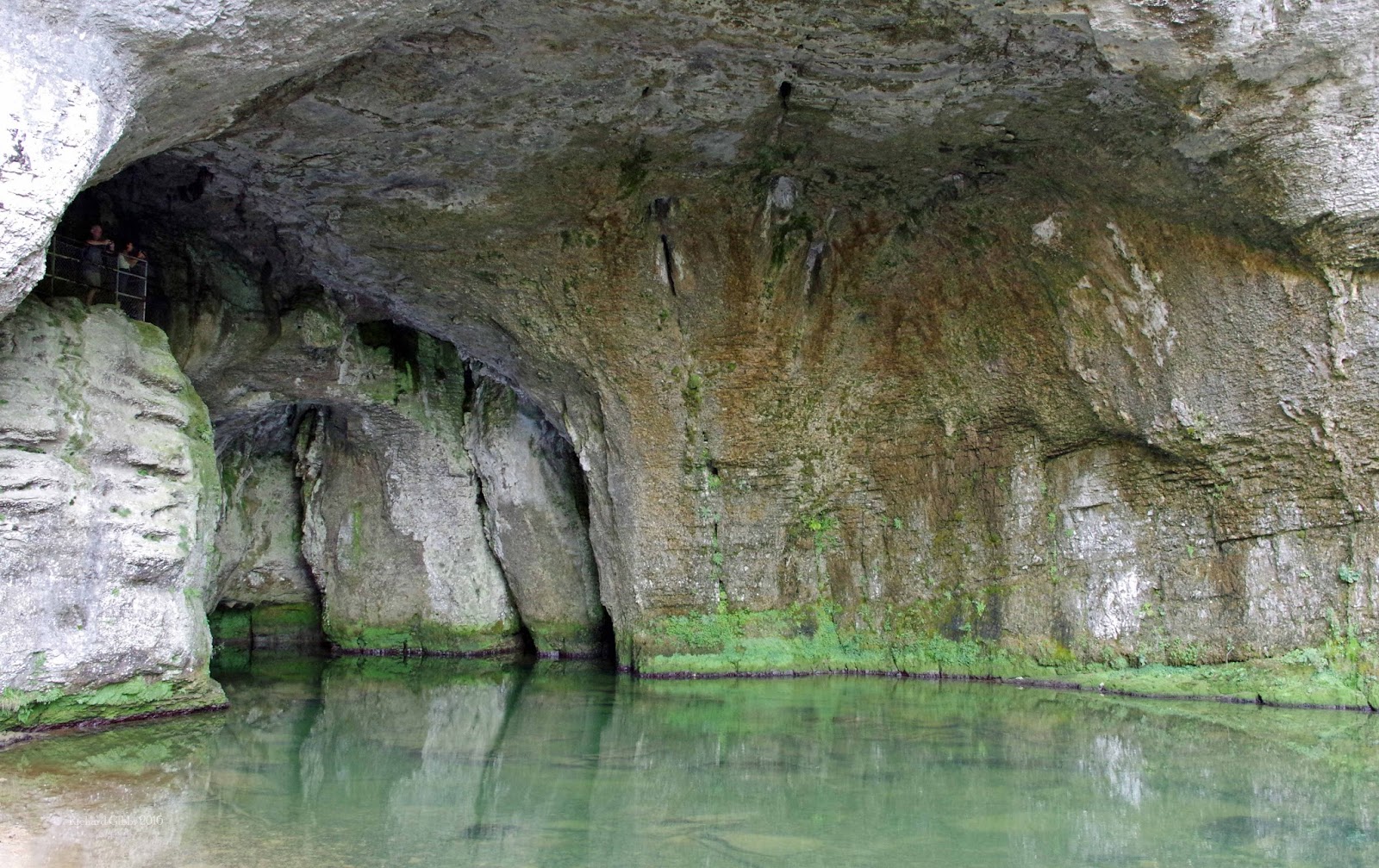 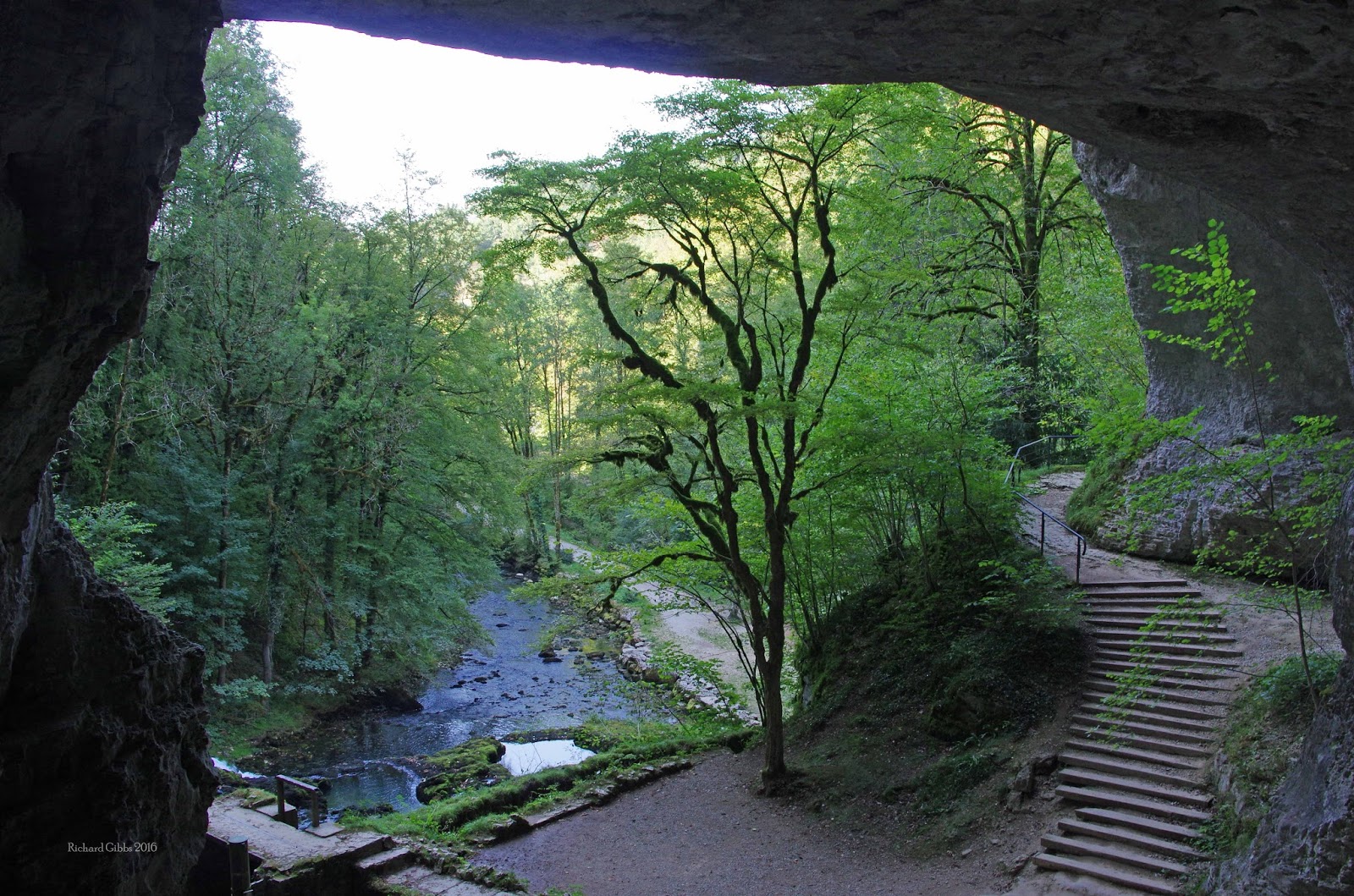 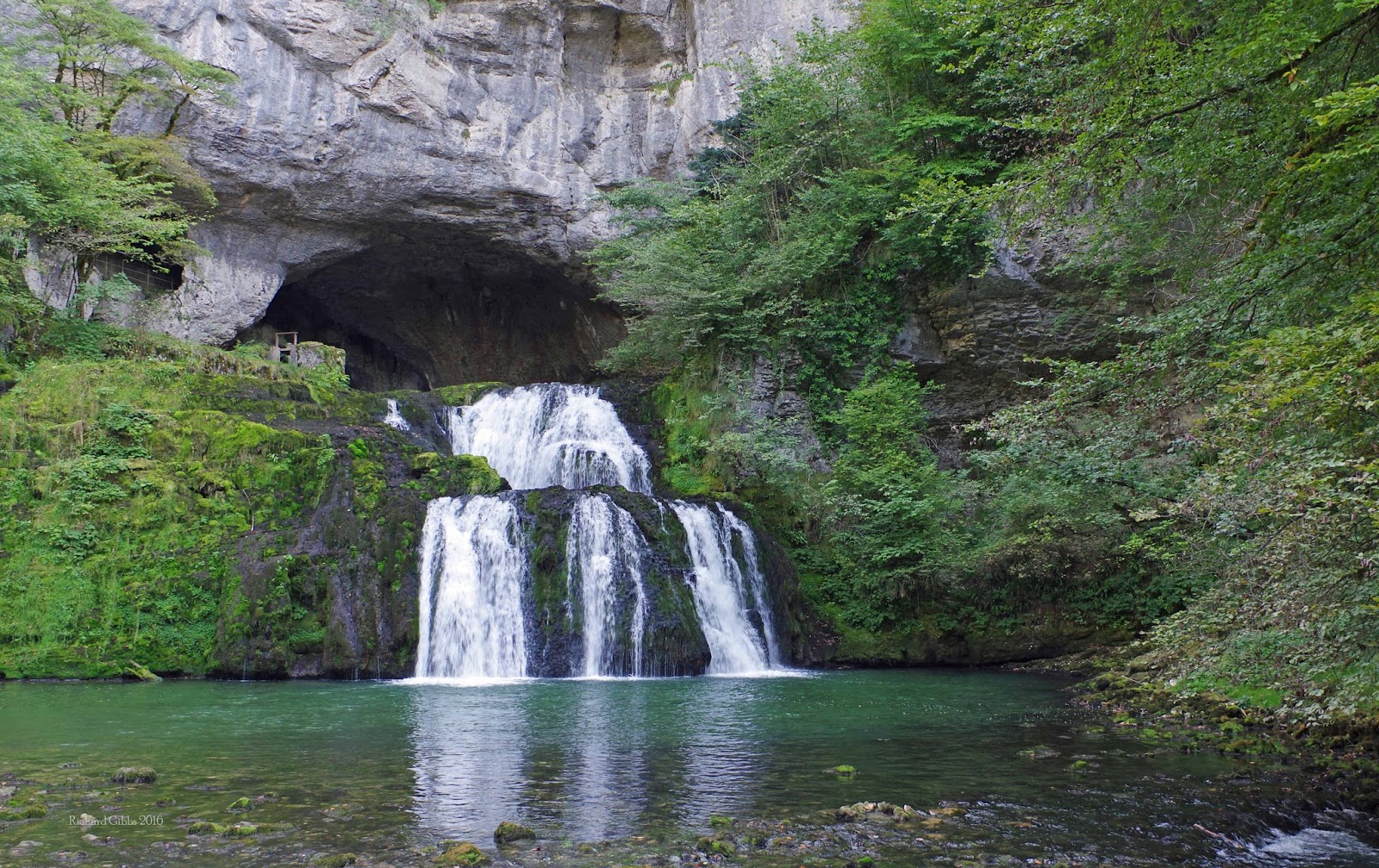 The is quiet, save for the clonking of cattle bells and the purring of cats, and our accommodation aside the chateau is beautiful, with stone flags on the ground floor and waxed wood upstairs. 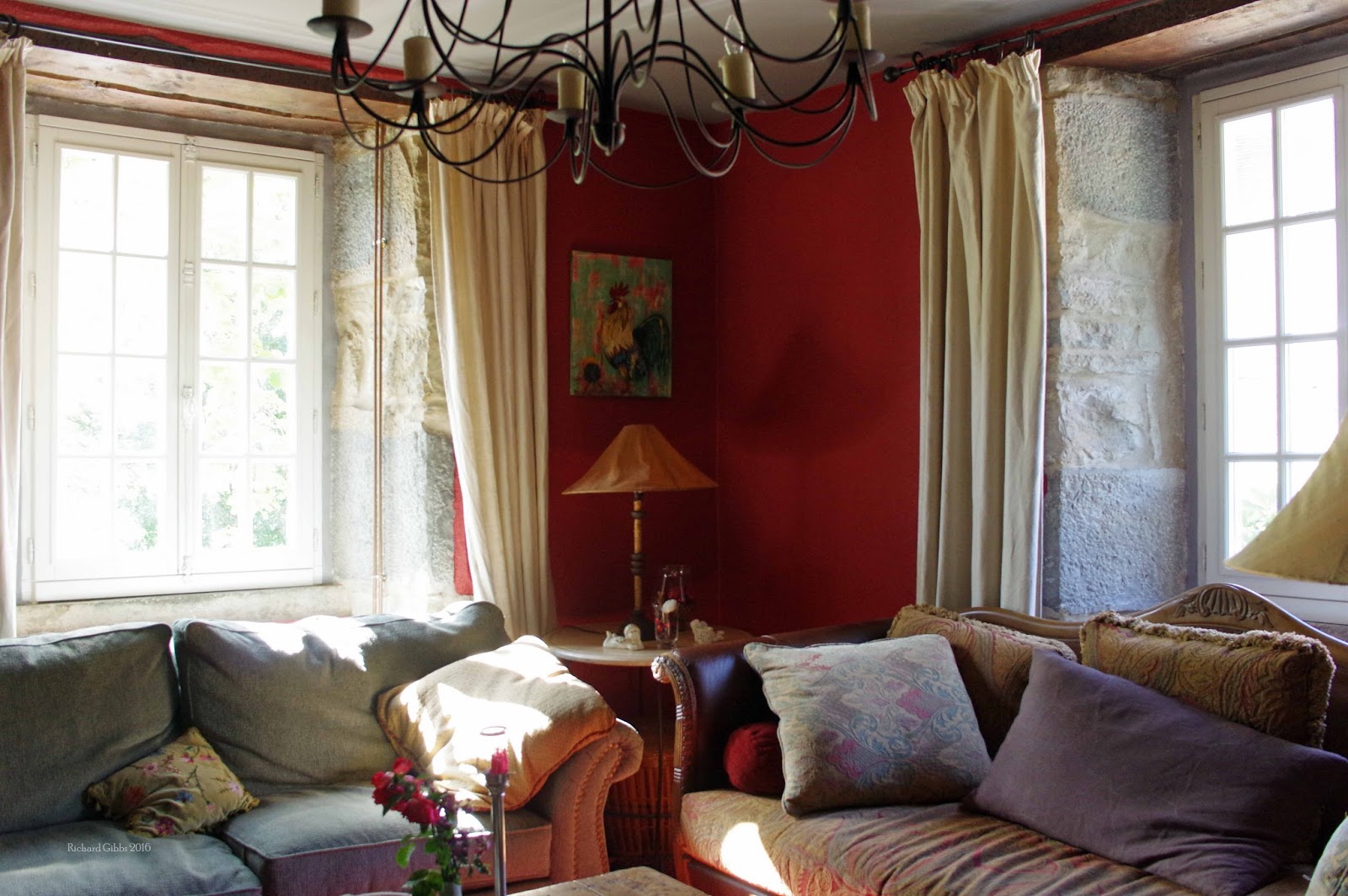 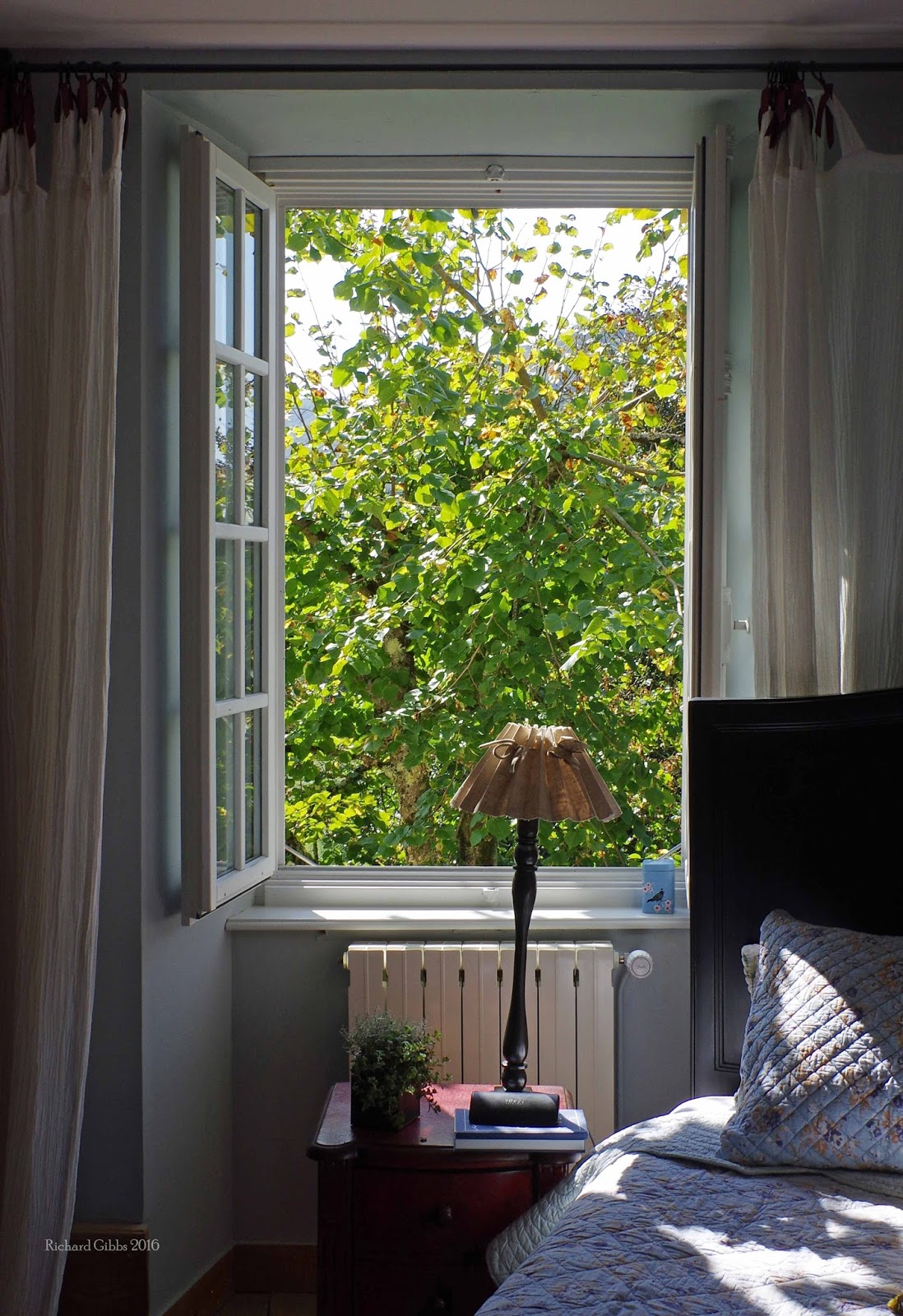 Our hosts are wonderful, and the other guests most polite, though I sense a delicate touch of disapproval…. (Brexit again?) Despite that, delightfully, there is a rather good restaurant nearby….. 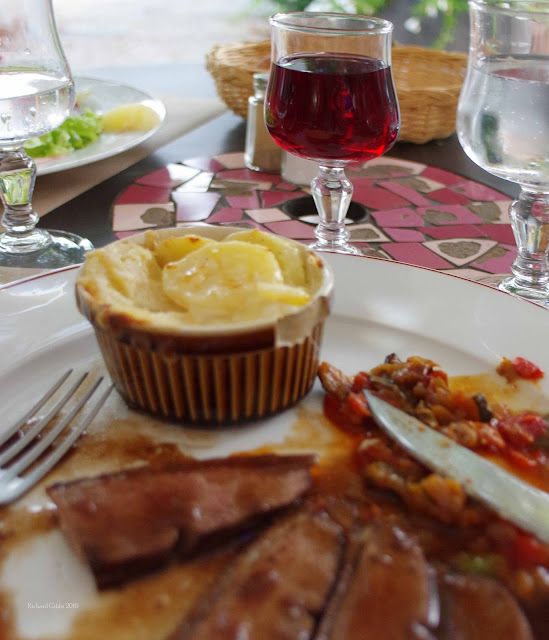 And the cats don't seem to mind us as we walk back in the dusk....

Day three and we cross the .  At first our roads are clear and rural, but then we pass through , by and Montreux whereabouts we pick up some traffic.  As we begin to rise towards the Great St Bernard Pass the road deteriorates, and at times is only single carriageway.

We decide against the tunnel, and wind up the old pass (at 2,469 metres above sea level) to take a break at the hospice. 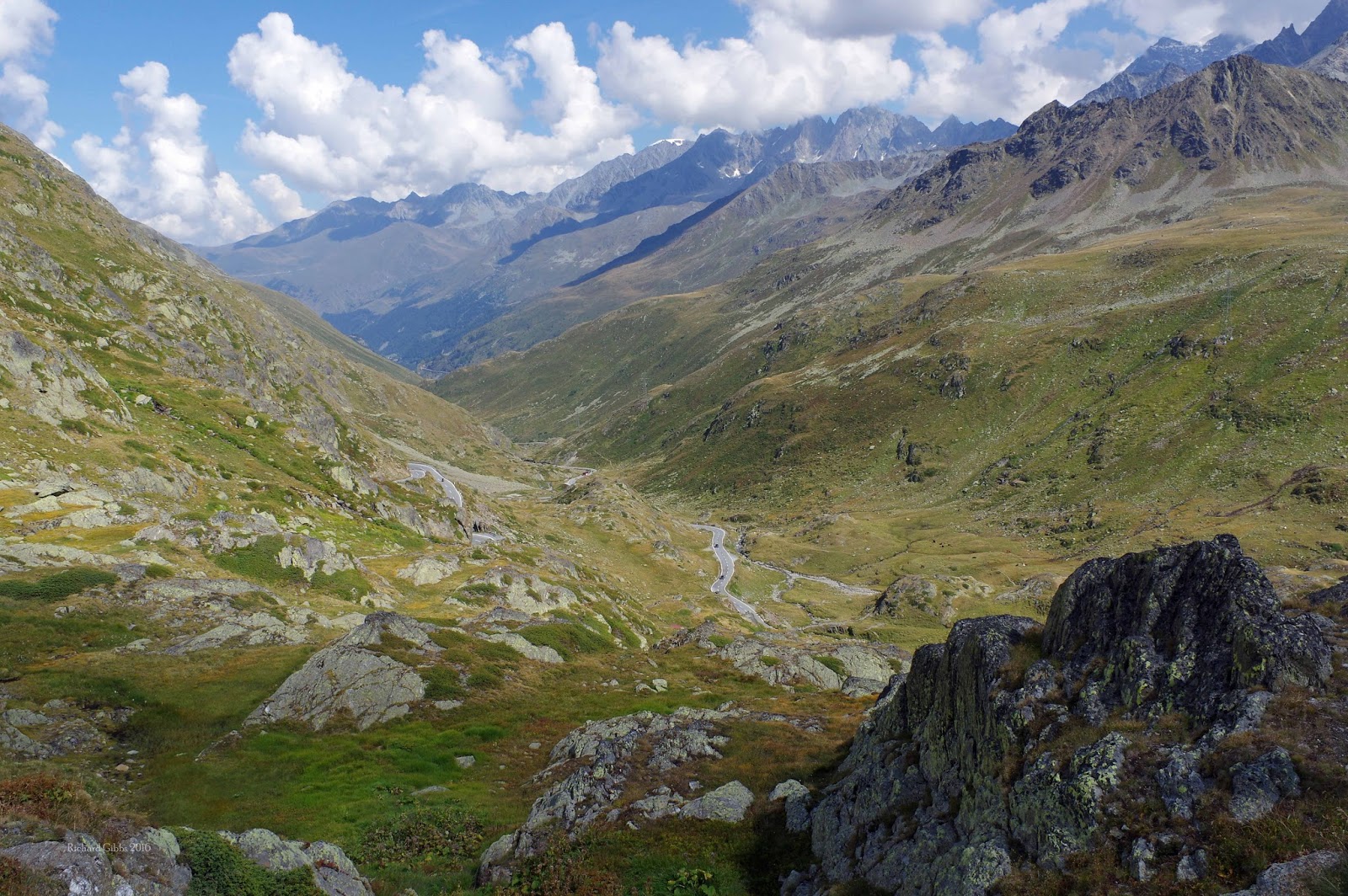 Fluffy toy St Bernards crowd round us, but we stick to fresh air, beer and a sandwich. 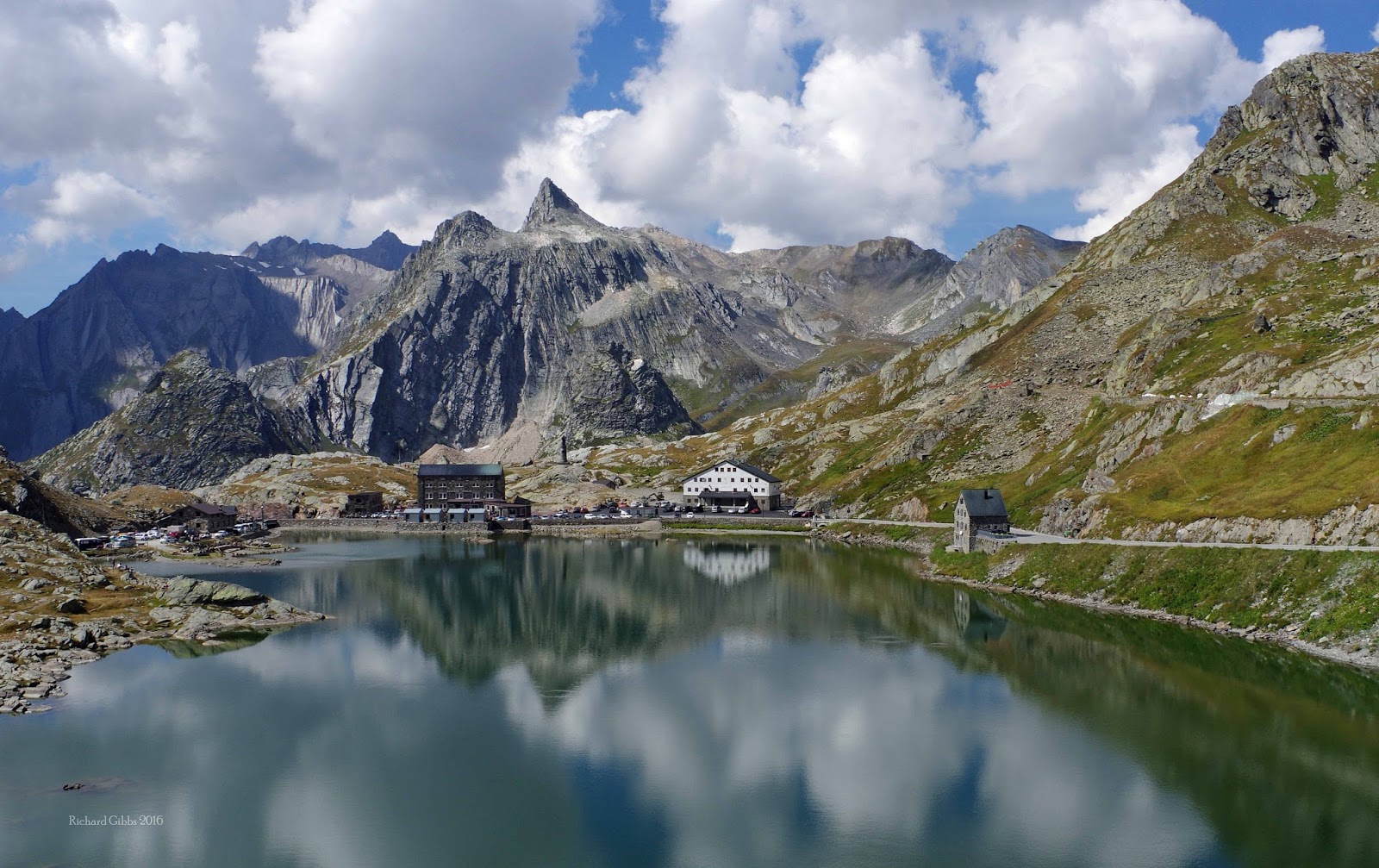 A kindly nun expertly takes our picture with the mountains in the background, 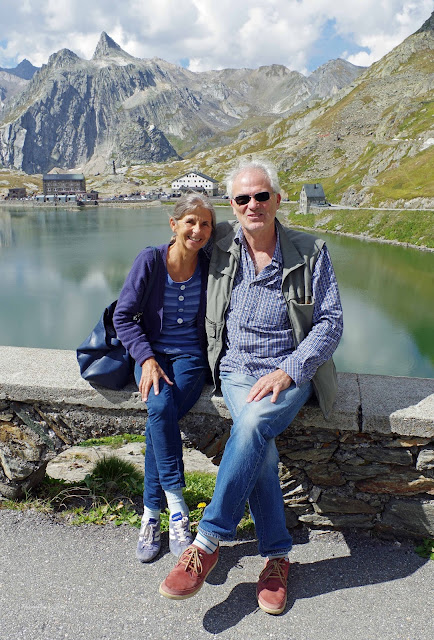 and then we plunge into , winding down and round towards the Valley of Aosta and our third night on the road, an agriturismo remotely situated some way above . 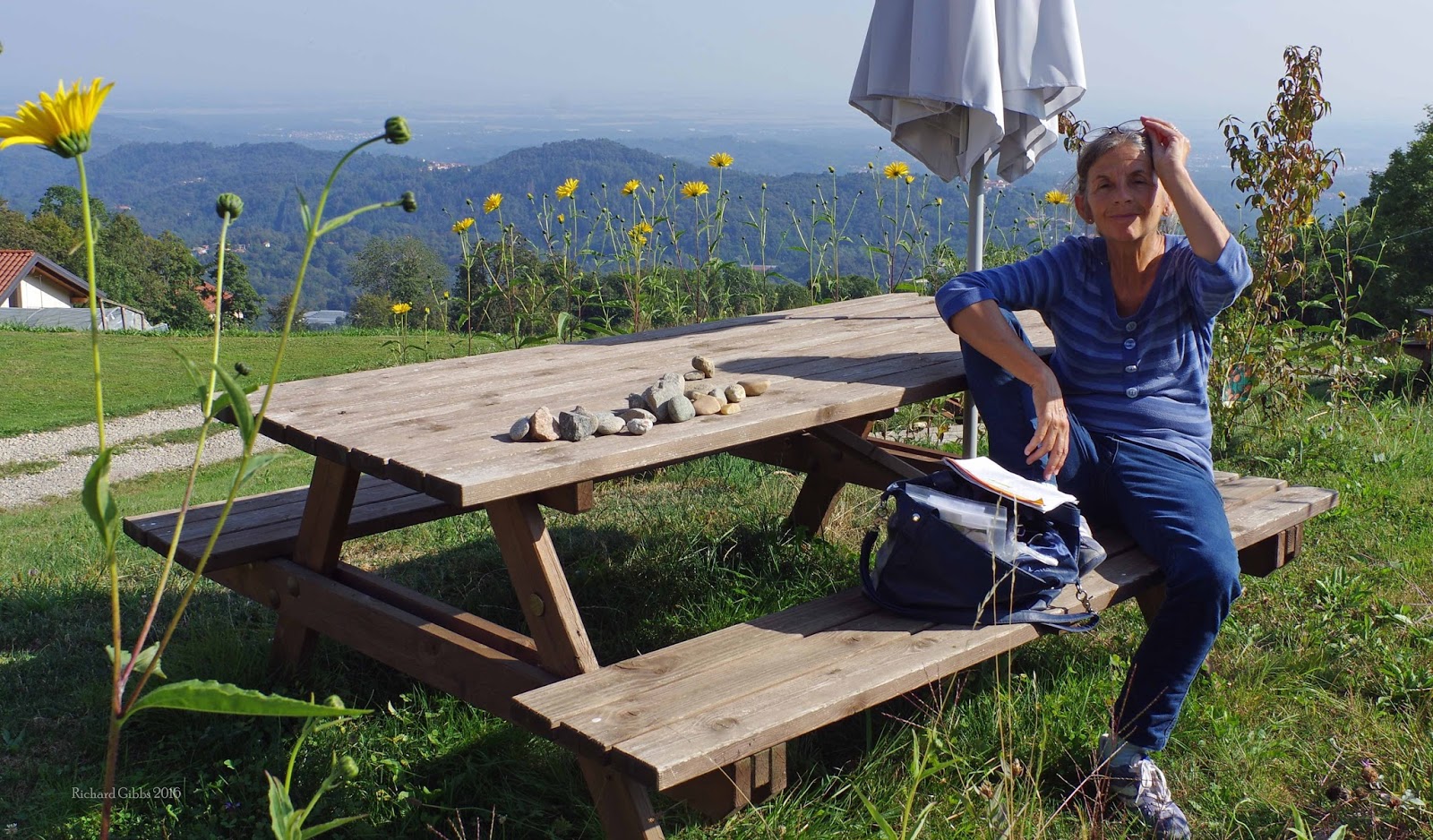 We have reached the promised land, and we walk among the chestnut trees, looking down across the country.  In the Santuario Mariano Madonna della Brughiere, just below our lodging, the priests have blown out the candles.... 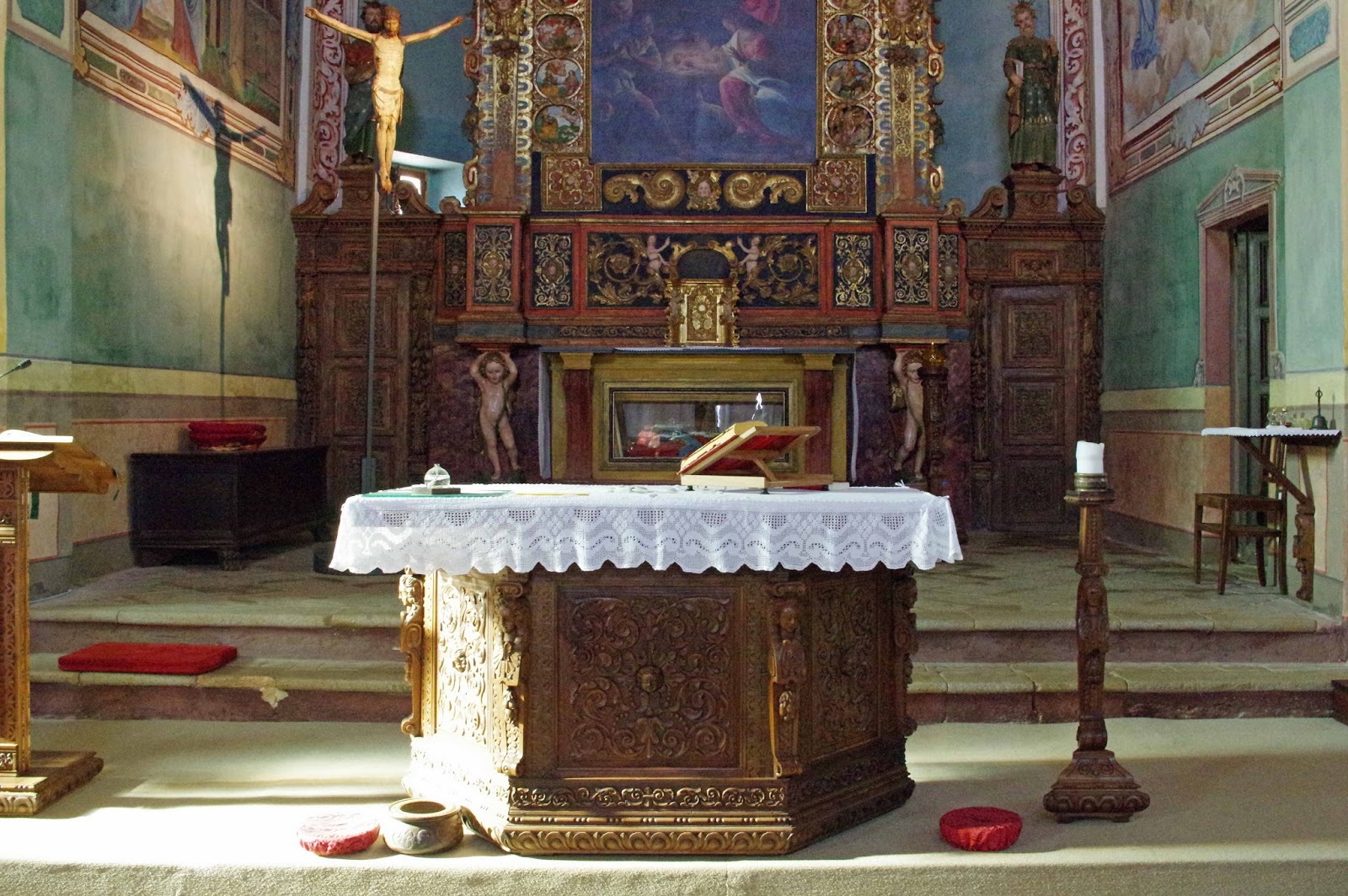 and it is time to repair to Il Castagneto for an early pizza, a glass of wine, and all things homeland for more than twenty years, and it is great to be back again, though some things may never be the same….. 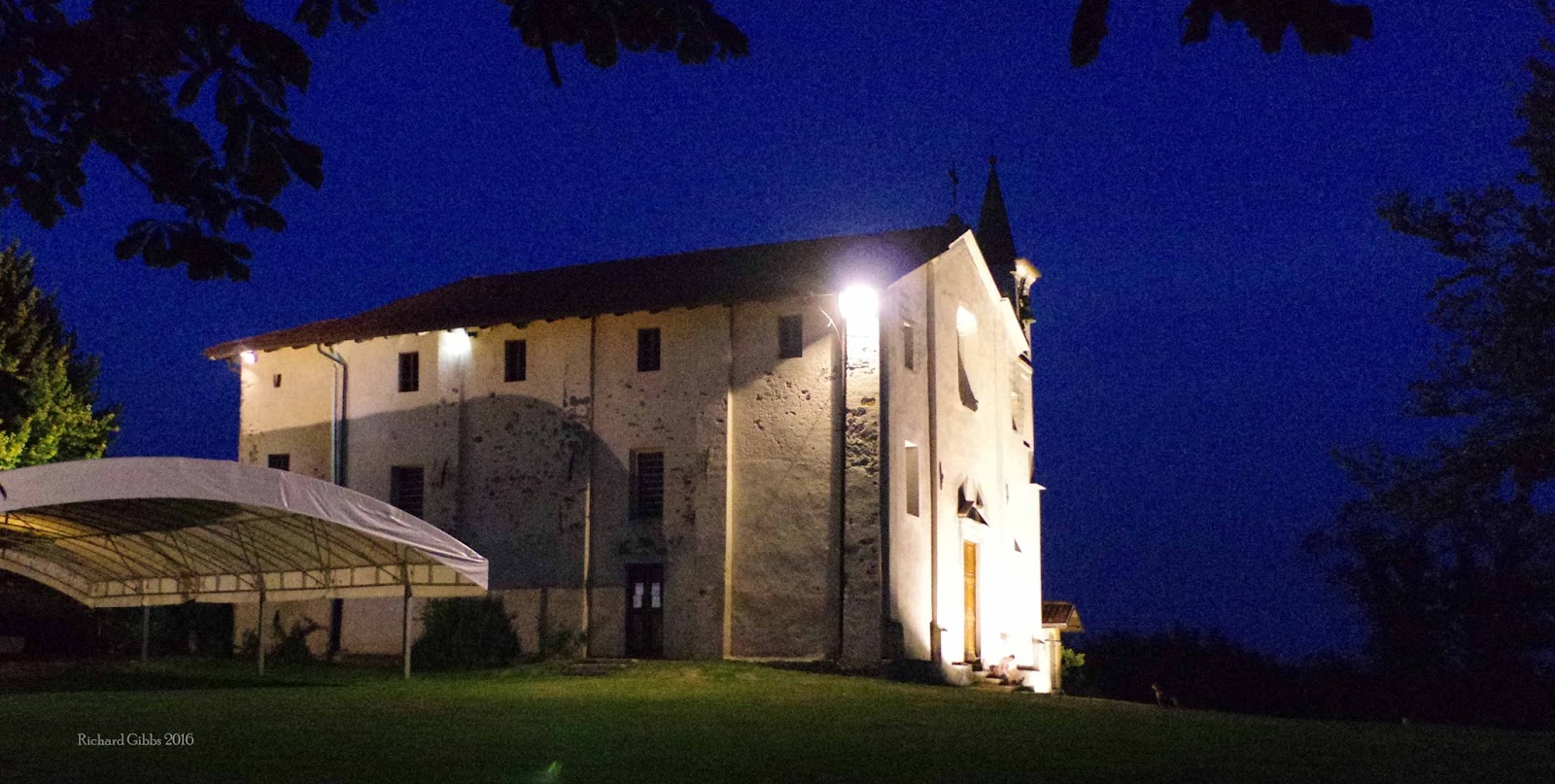 So far, so good, though.  Brexit seems a long way away, and the sun is ahead of us…. 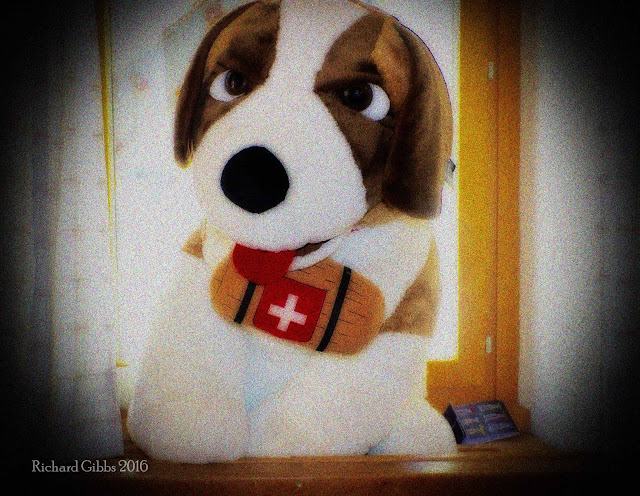 I love St Bernards, and not just because of the barrel: our butcher in Drayton (Portsmouth) had one when I was small.  I remember he (the dog, not the butcher....) used to pad across the sawdust strewn floor of the shop, as big as a horse to little me....  And I remember my mother handing over the ration book (to the butcher, not the dog.....)

I wonder if the dog had rations?