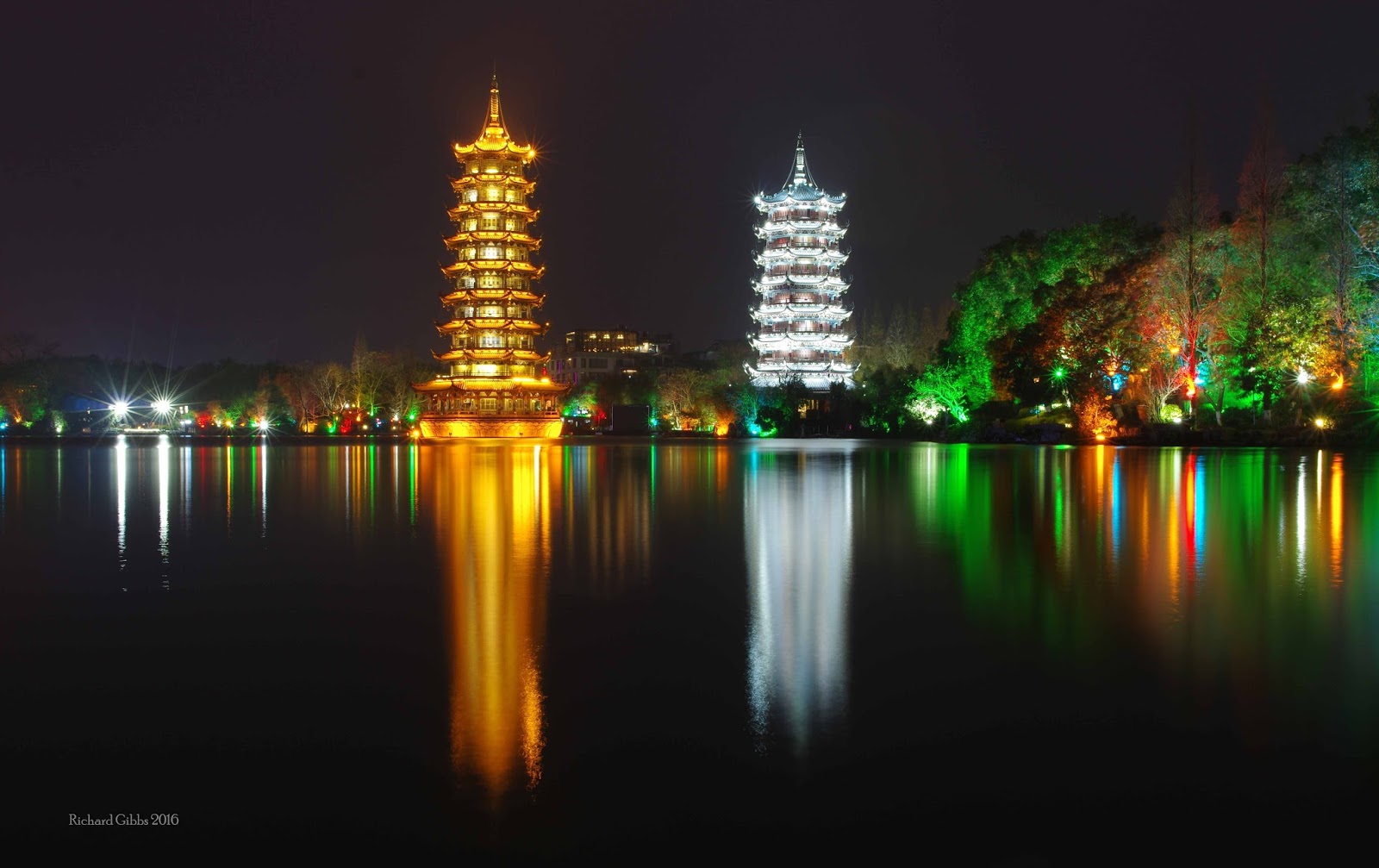 We took off from in thick cloud.  Minutes later, the sun was shining.  The first sunshine in a week.  Clear and bright, and reflecting up from the grey blankets below.

Then, little more than an hour later, we dived back into the clouds, and landed at , and found ourselves shivering in winter weather again, though we were fortunate:  Hong Kong had had a sprinkling of snow, and the north of had suffered heavy blizzards and freezing temperatures. 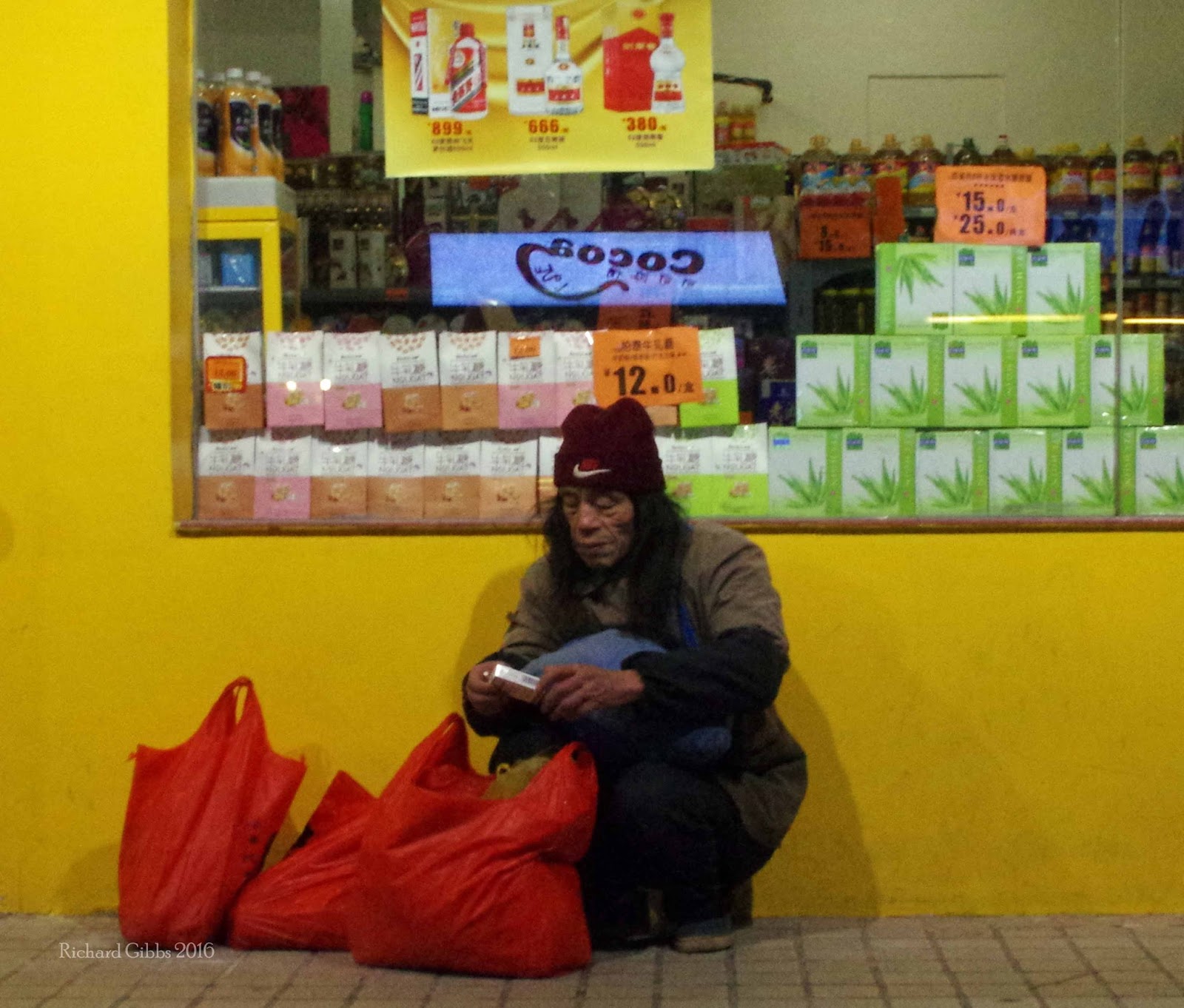 isn’t what I expected – somehow, disregarding the fact that it has an airport, I had expected something old, something characteristic of another world.  I thought the town would be a bit like perhaps, but without the bomb damage…..  No. ’s population is around three times the 442,000 that live in , and there the similarity ends…. But is the hub of , and this was the we had come to see. 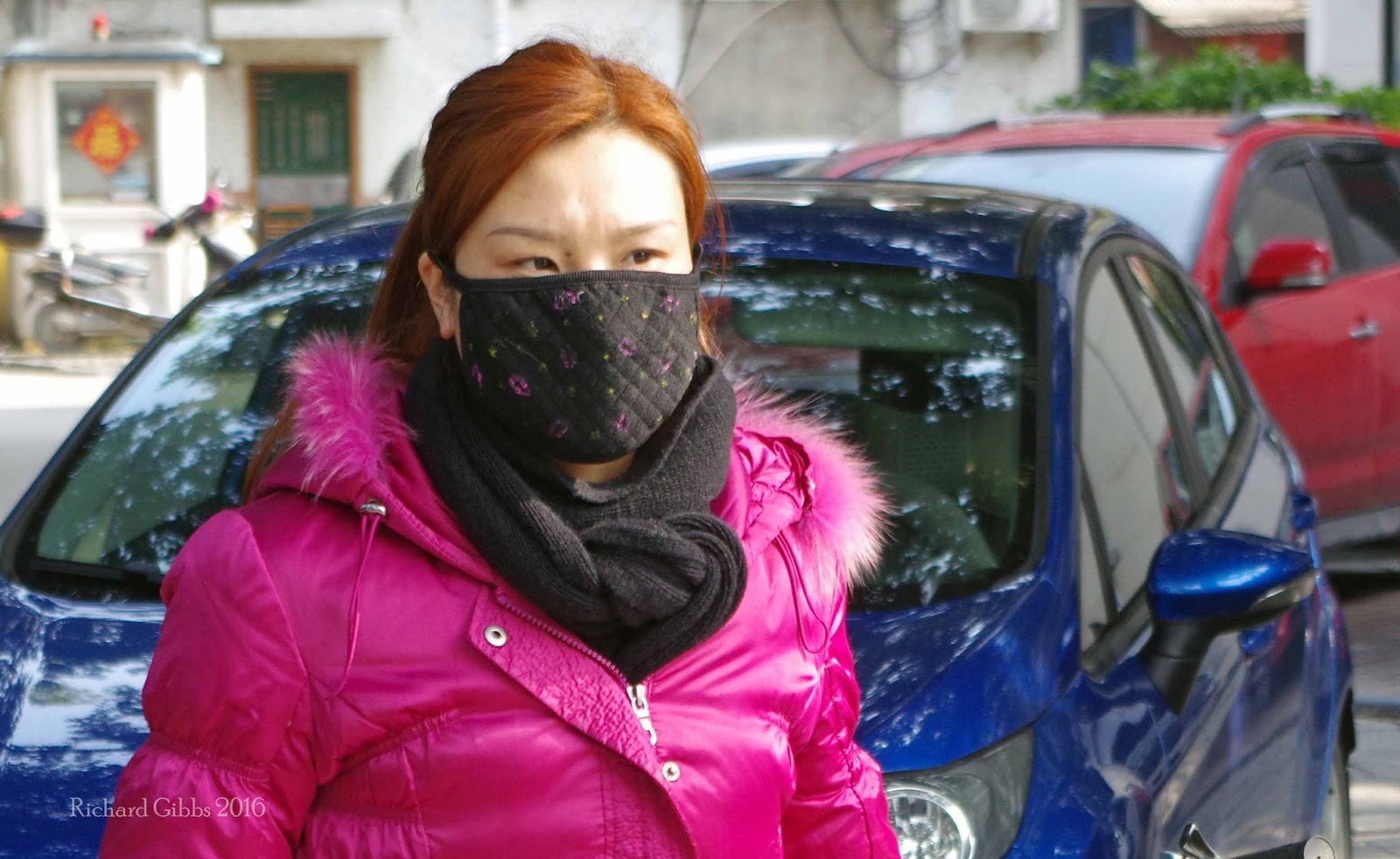 Part of the answer is that cities like this seem to be at their best at night, when the coloured lighting and glowing characters appear magically to rise where in daylight there is grey concrete and urban squalor.  The centre of town has two lakes, decorated by a fantasia of an unreal – a glass bridge, twin pagodas, tiled tea rooms reached by sculpted pathways and surrounded by giant bamboo. It’s a dragon’s playground, and it comes alive with groups of women practising their coordinated dance routines, some to beautiful Chinese music, some to western pop.

The name means trees, and in spring the air will be full of sweet scent.  But not now.  ’s official travel website quotes high praise from the National Geographic (I was prepared for so many of the things we saw in other cities: the Great Wall, the Terracotta Army, etc.  But travelling down the Li River, I genuinely felt like I was in a completely different and unique part of the world….) And, apparently, former US president Bill Clinton was so moved by what he saw here in 1998 that it made him think of traditional Chinese paintings….. 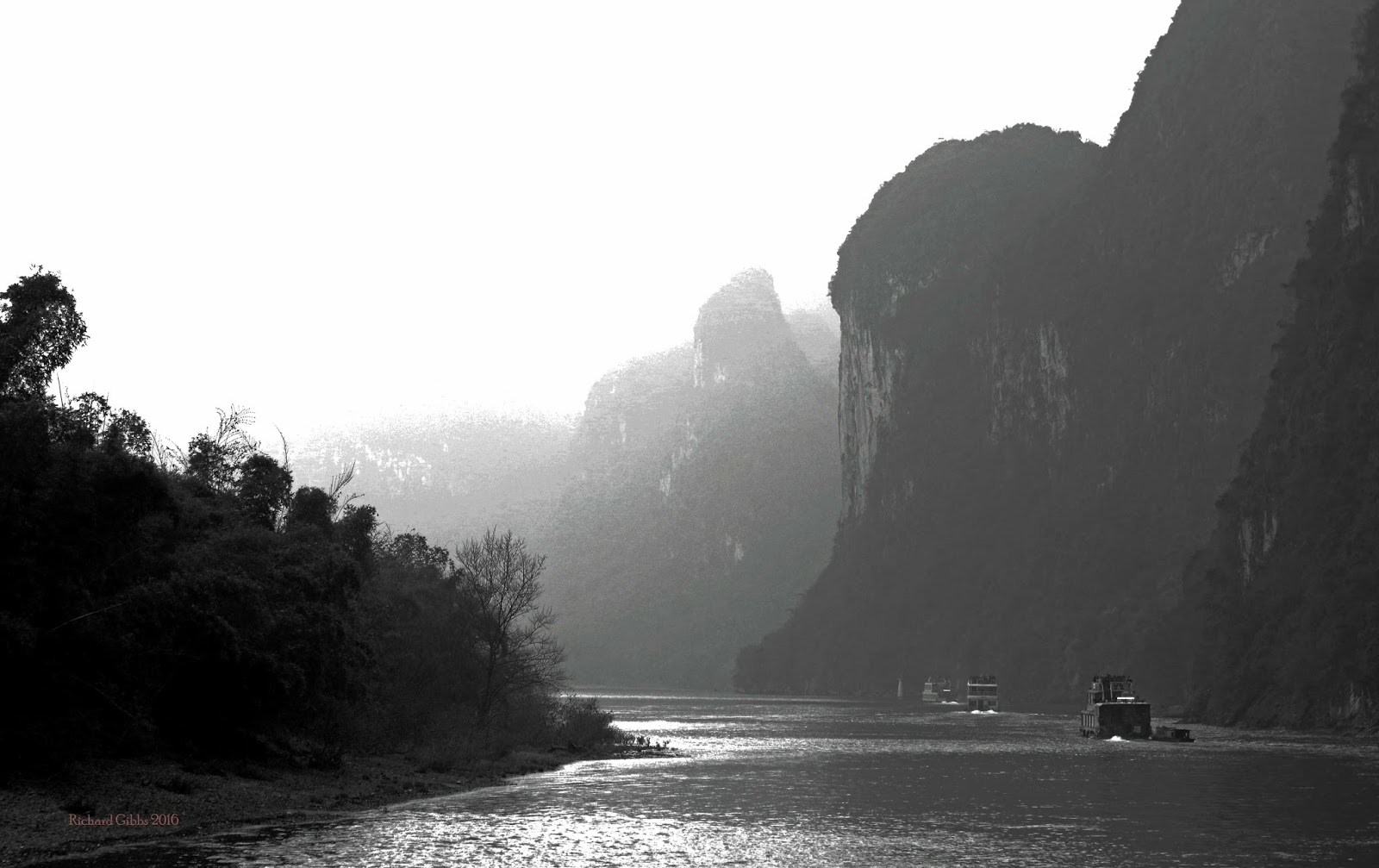 So it was that next morning a bus picked us up and we chugged down through the industrial outskirts of the city to Zhujiang Pier to join our river cruiser.  It was a misty morning, and the visibility wasn’t great, but then perhaps this lent the scenery some of the mystery that Bill associated with the pen and ink washes of the old masters.

It’s 83 kilometres from Guilin to Yangshuo (out of the 437 from source to the West River), which gives us a leisurely four hours amongst extraordinary limestone karst mountains, some of which appear on the current 20 Yuan note, which gives cause for a great deal of excitement amongst our co-travellers, most of whom want selfies at this point…. 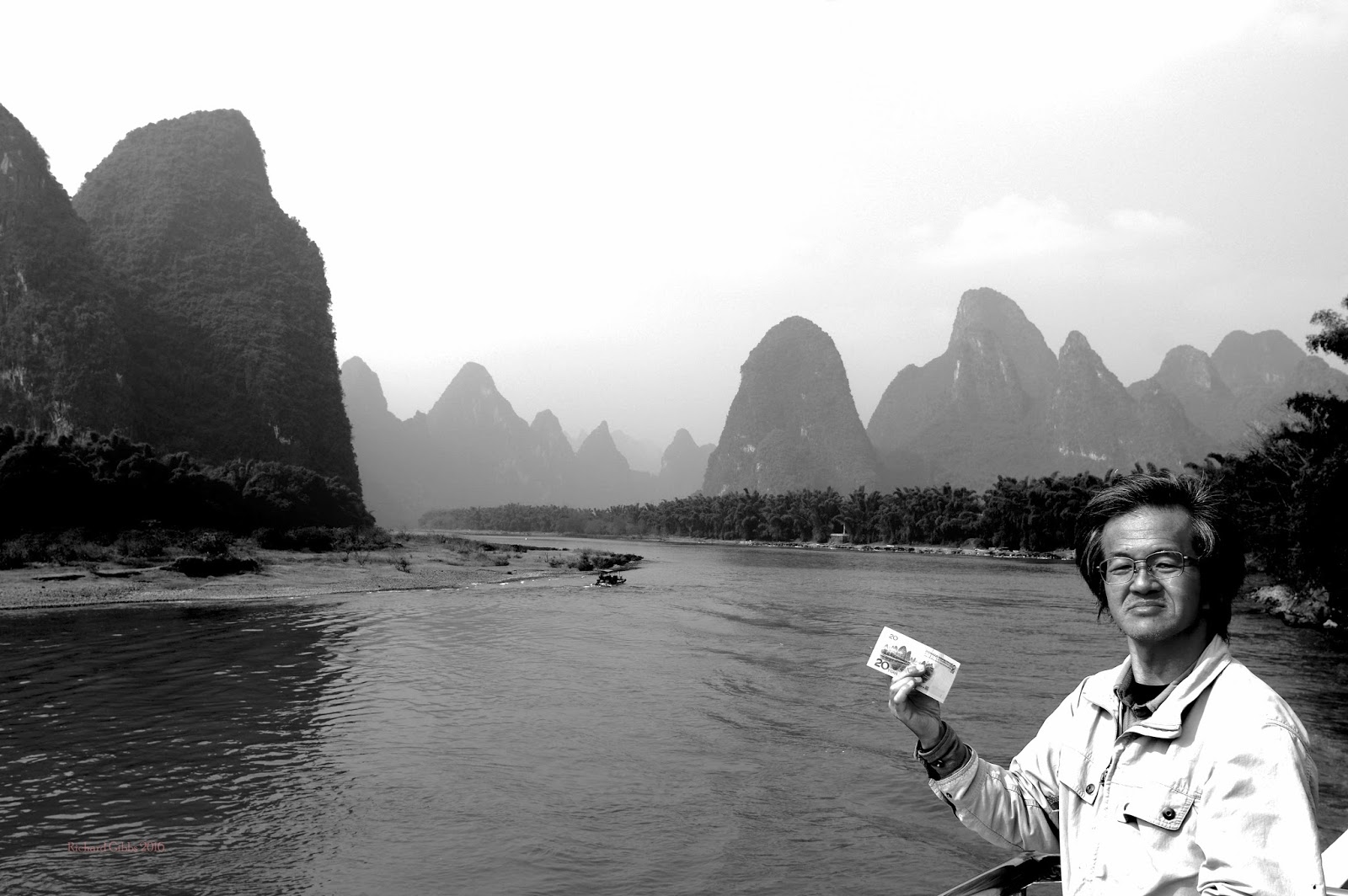 Yangshuo has long been on the map for climbers, and it is inundated daily by the floods of trippers who disembark here before taking buses back up to .  The centre has an old, stone, feel to it, but the writing is on the wall, as an enormous mall is being constructed. 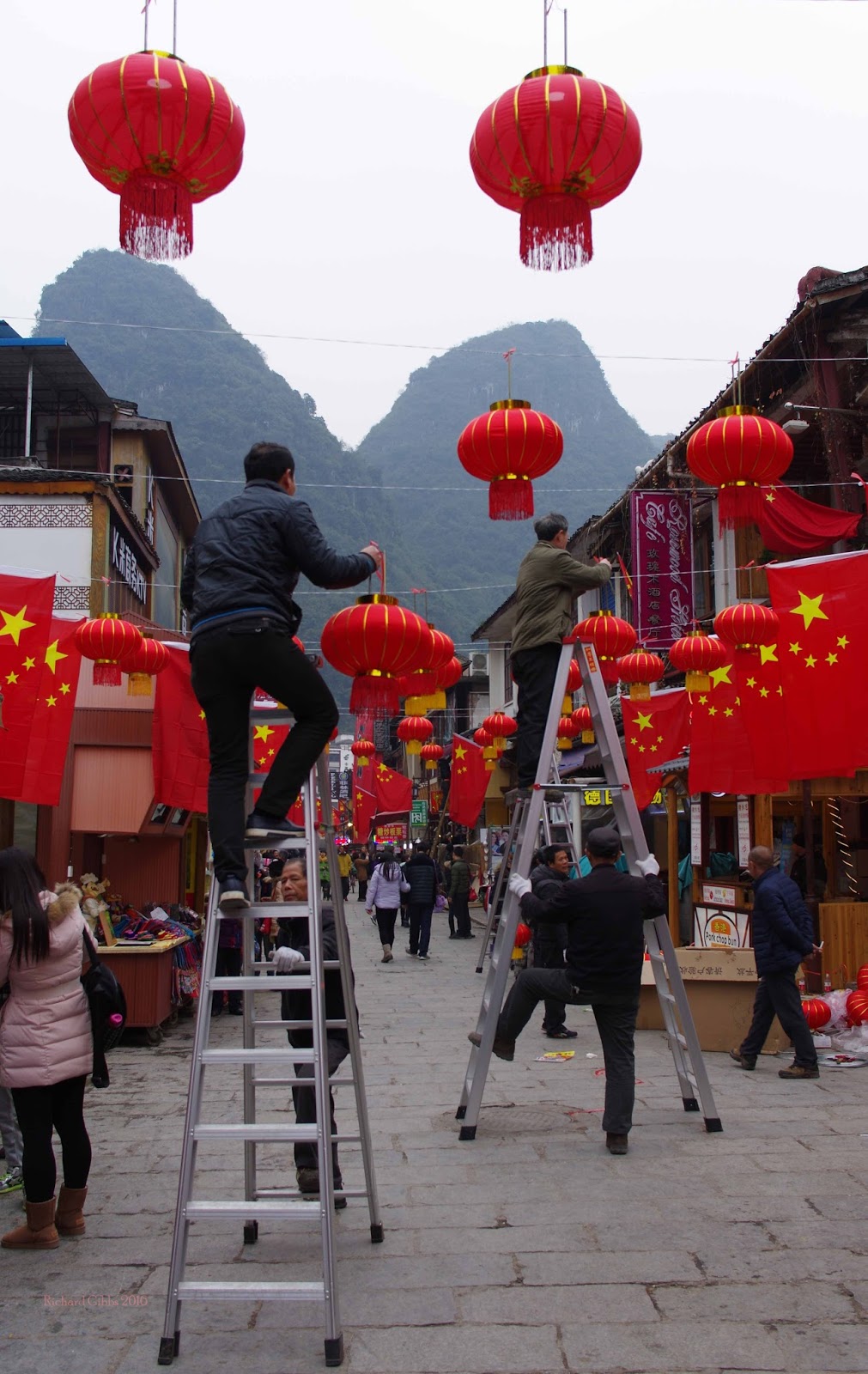 We are staying in the tiny village of Jiuxian, some way out of town, in a reconstruction of village houses that has been patiently carried out by a South African, Ian Hamlinton, who has been here for six years. 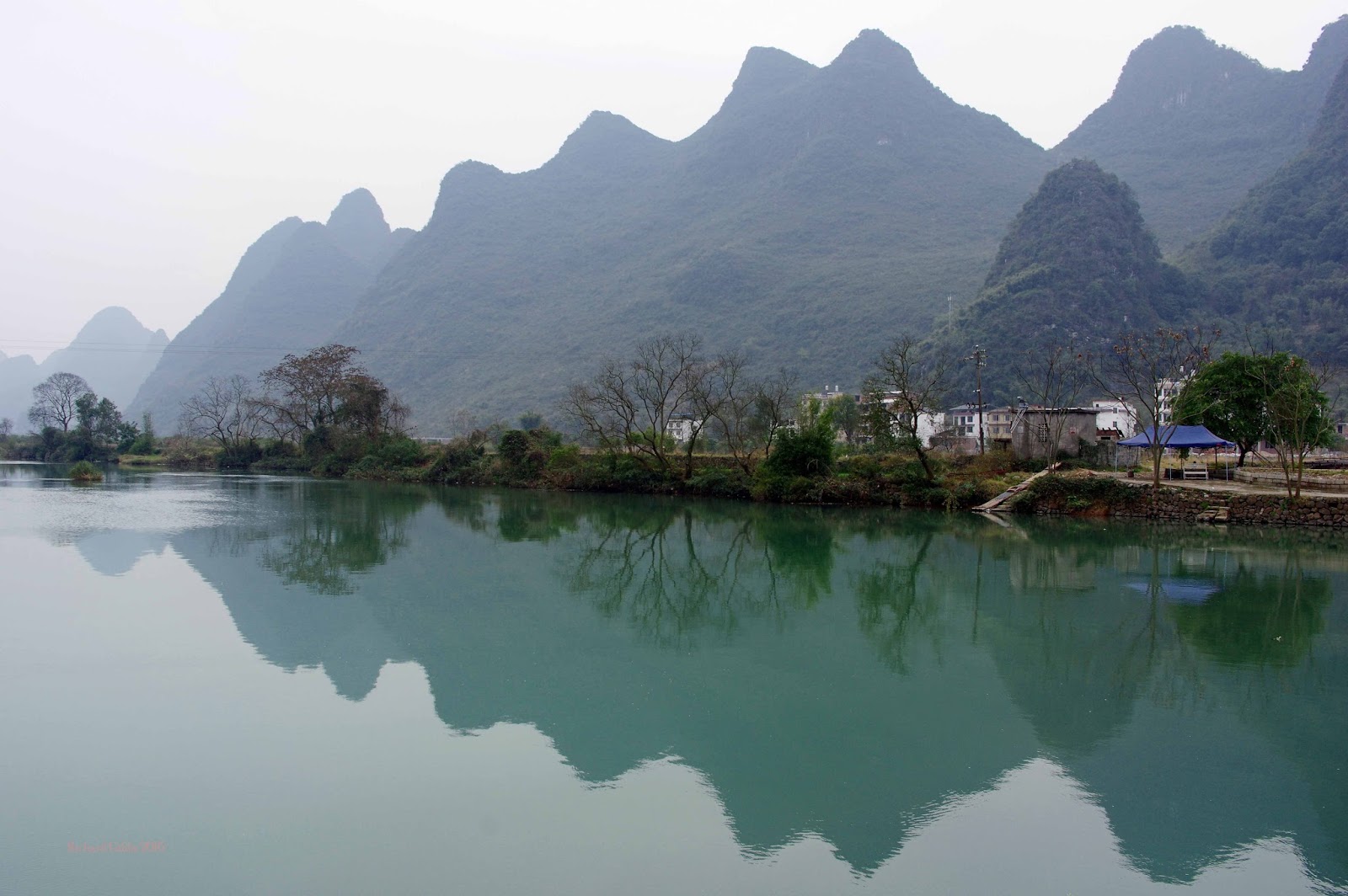 Next point of call is the , which is back up the river at the point where the 20 Yuan note was drawn.  We have a memorable lunch here - memorable for the webbed foot that surfaces in our duck dish…. 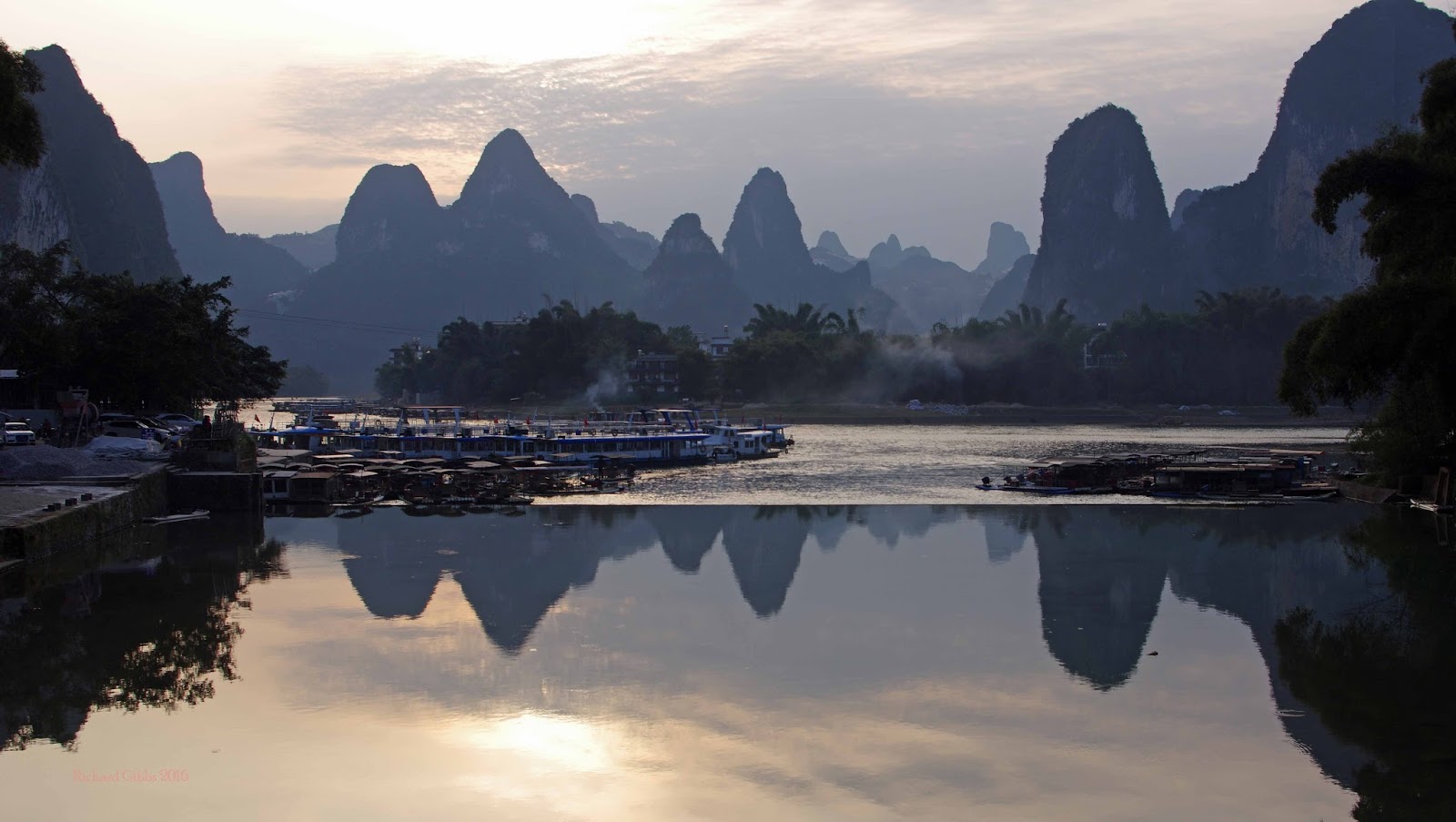 Then it is a long ride across country, held up here and there by holiday traffic – whole families in trucks and three wheelers, many with live chickens - and colourful markets spreading through the streets.  Then we speed along stretches of almost deserted highway through unspoiled countryside, before hitting a bit that has either been washed away by rains, or which has never been made…. 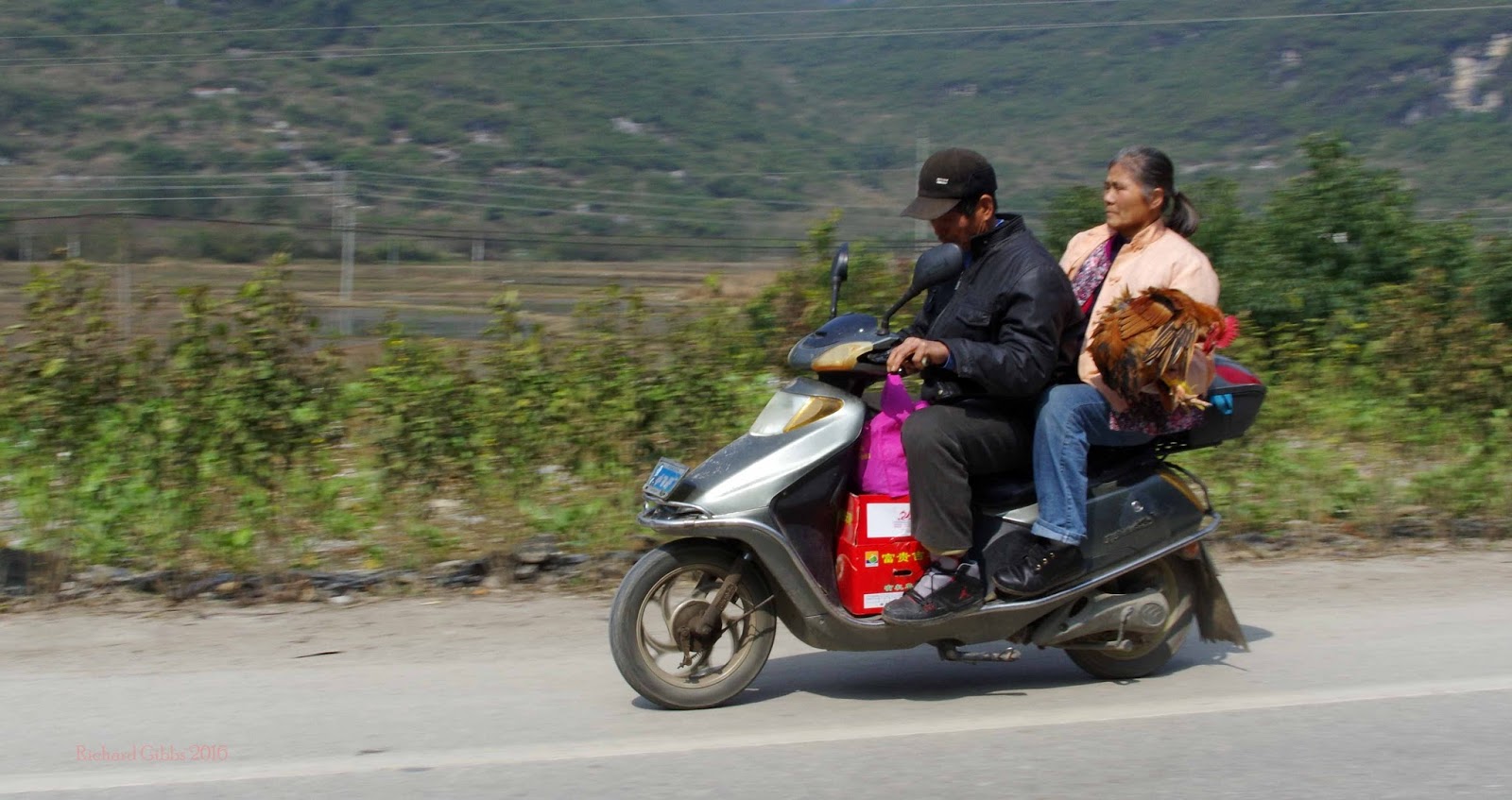 We have to negotiate again, before heading up country, past pomelo orchards, and then tea plantations, until we reach the entrance to the Longji Terraced Rice Fields, where we stop for lunch in a riverside village.  Here we taste delicious salt pork with bamboo, served by women of the Red Yao minority, who never cut their hair, but wind it up on their heads like turbans. 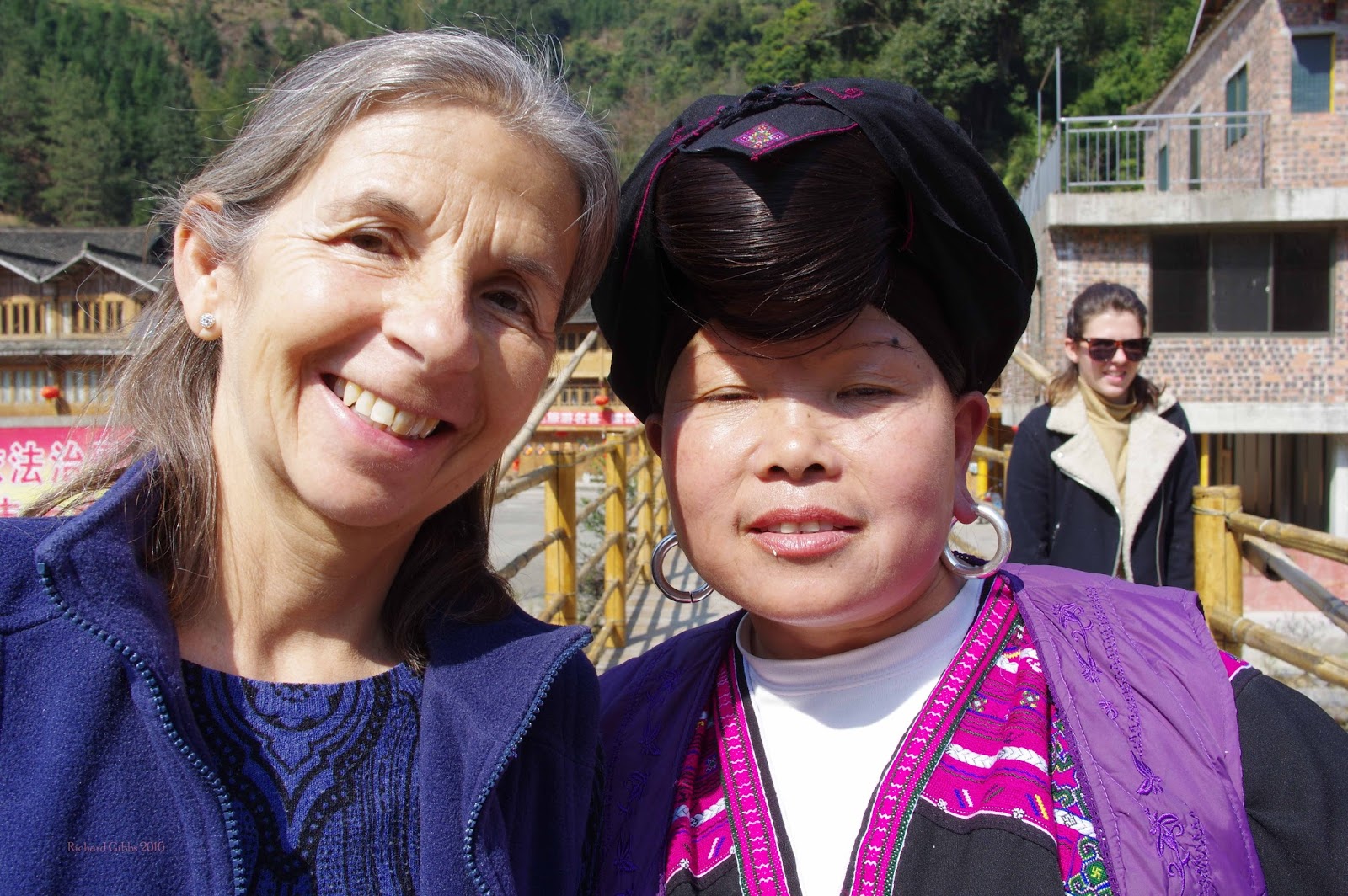 Our destination is the , and we are staying at 800 metres above sea level.  It is really cold here, but the Year of the Ram ends with good weather and in the morning we start out from Ping’an Zhuang Village to trek to after a late breakfast.  Our host, Lynn, from , had said that she had made the trek in two and a half hours, though she thought we would need perhaps four…. 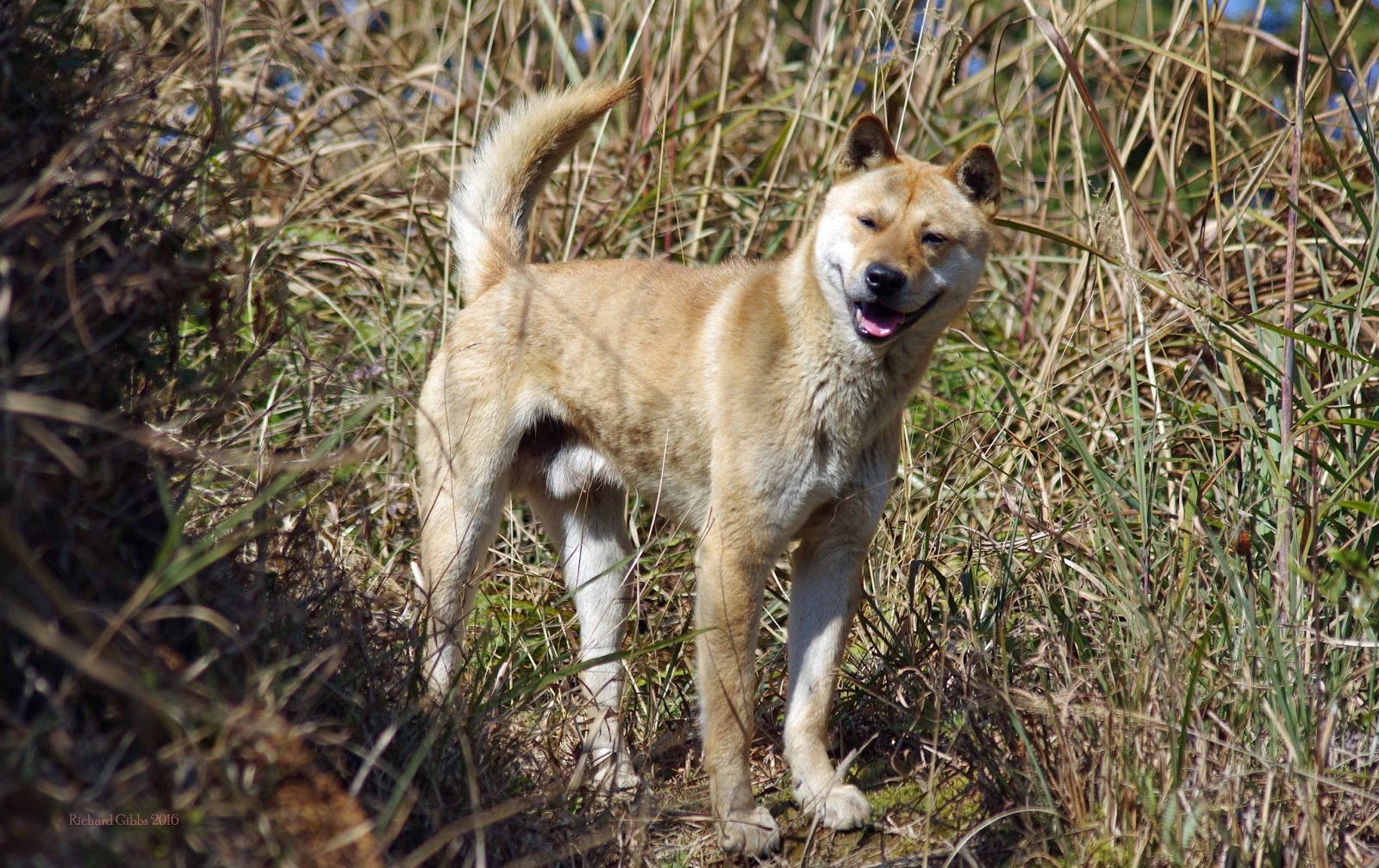 So, optimistically, we set off, along the path to the Moon surrounded by Seven Stars, from where the extent of the Longji (Dragon’s Backbone) rice terraces unfolds. 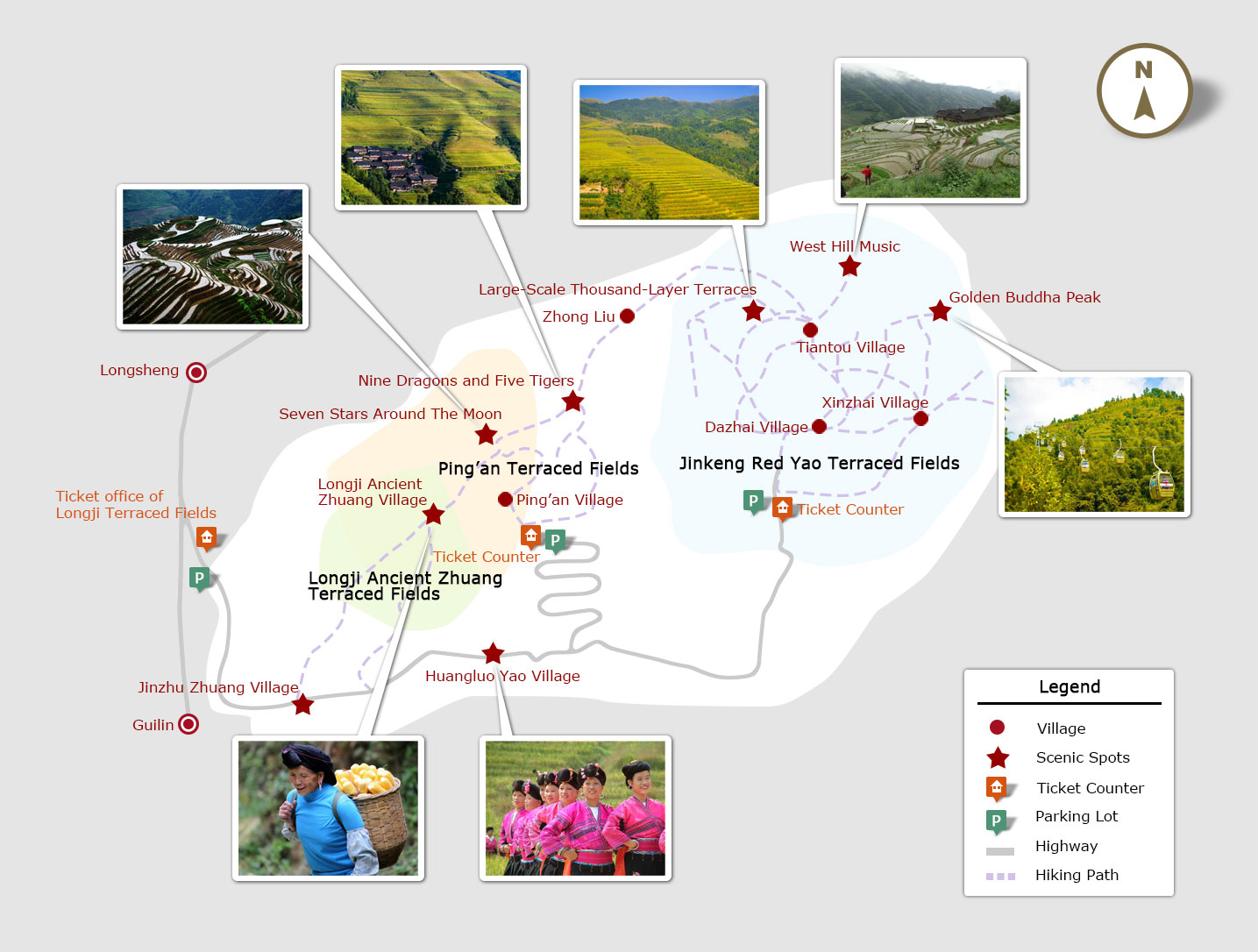 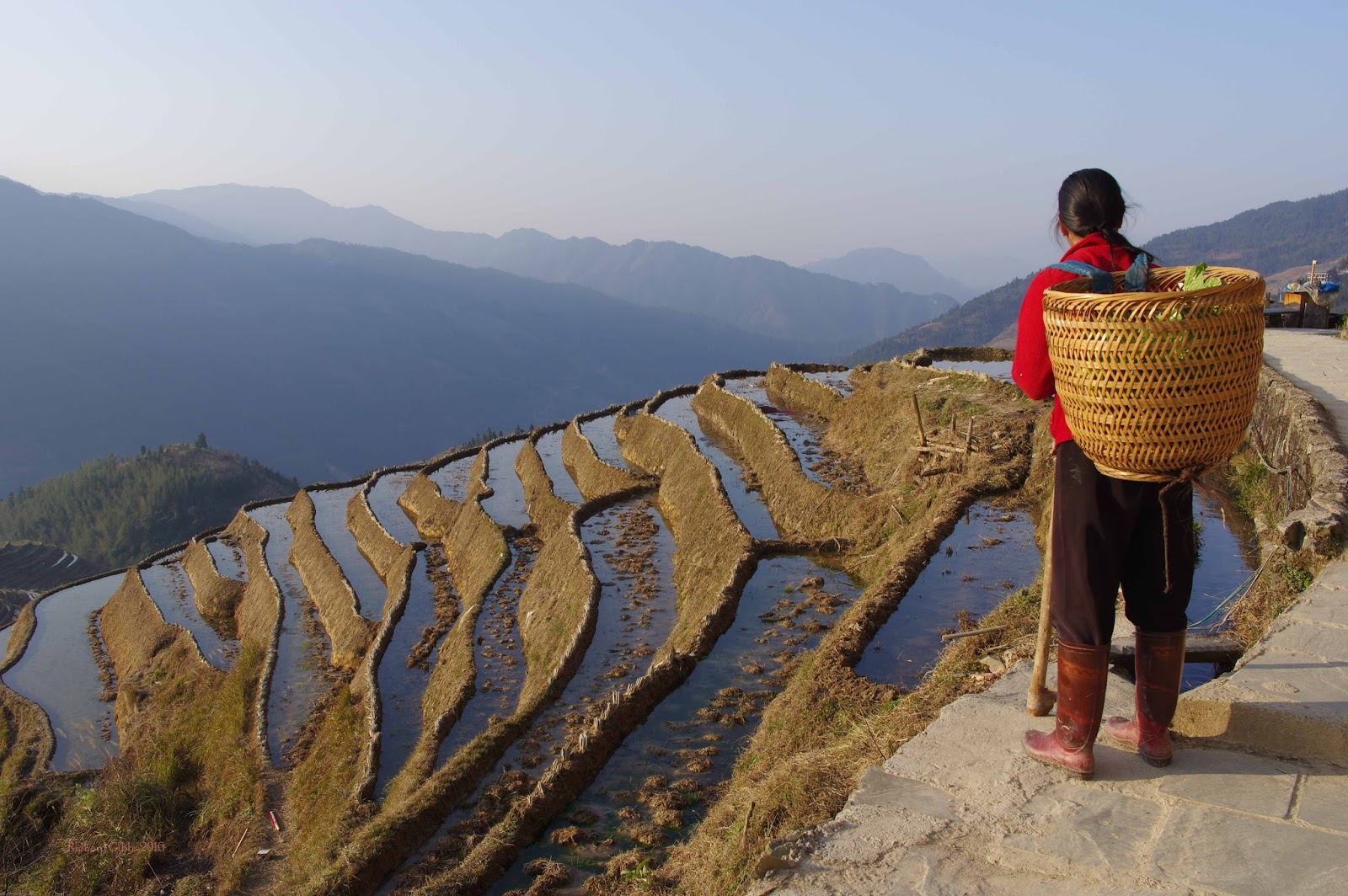 They range from 300 metres to over 1,100 and their construction continued until the Qing Dynasty (1644 – 1911).  This is one of the wonders of , having survived the rigours of history, including the cultural revolution…. 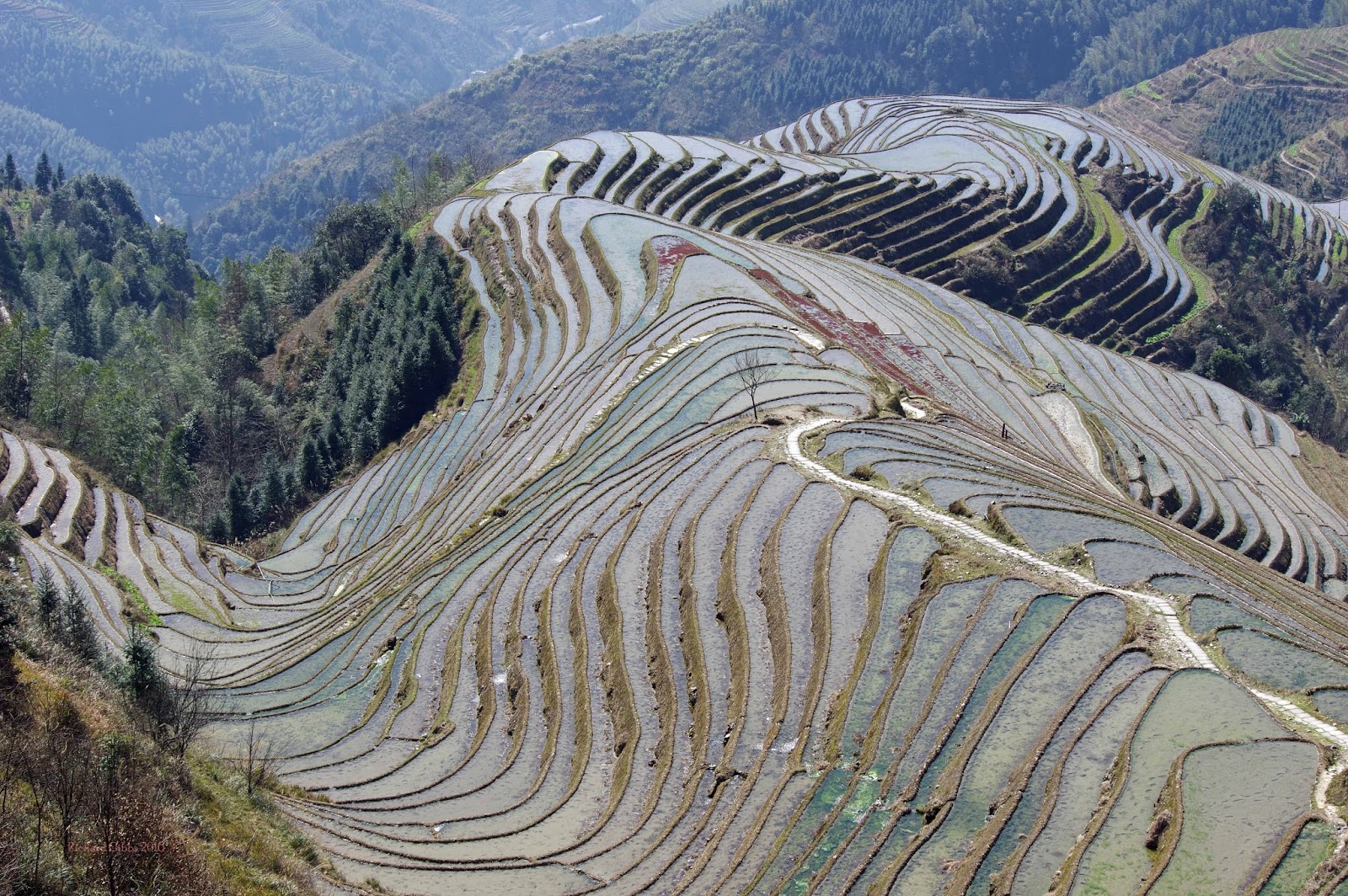 It is hard to tell when might be the best time to visit, but we are exceptionally lucky, as the day is clear, the temperature pleasant, and we encounter few people on the path, most of whom are carrying chickens and fireworks to pay respects at their ancestors’ graves.  In summer all would be green, and shimmering with mosquitoes.  In silver spring or golden autumn the paths would be filled with tourists.  As it is, we have the bamboo forests, the shiny waters and bare slopes at our disposal.

It is lunchtime when we reach the , which is about as unspoiled as you will get, with no hotels or restaurants, just a couple of shops. 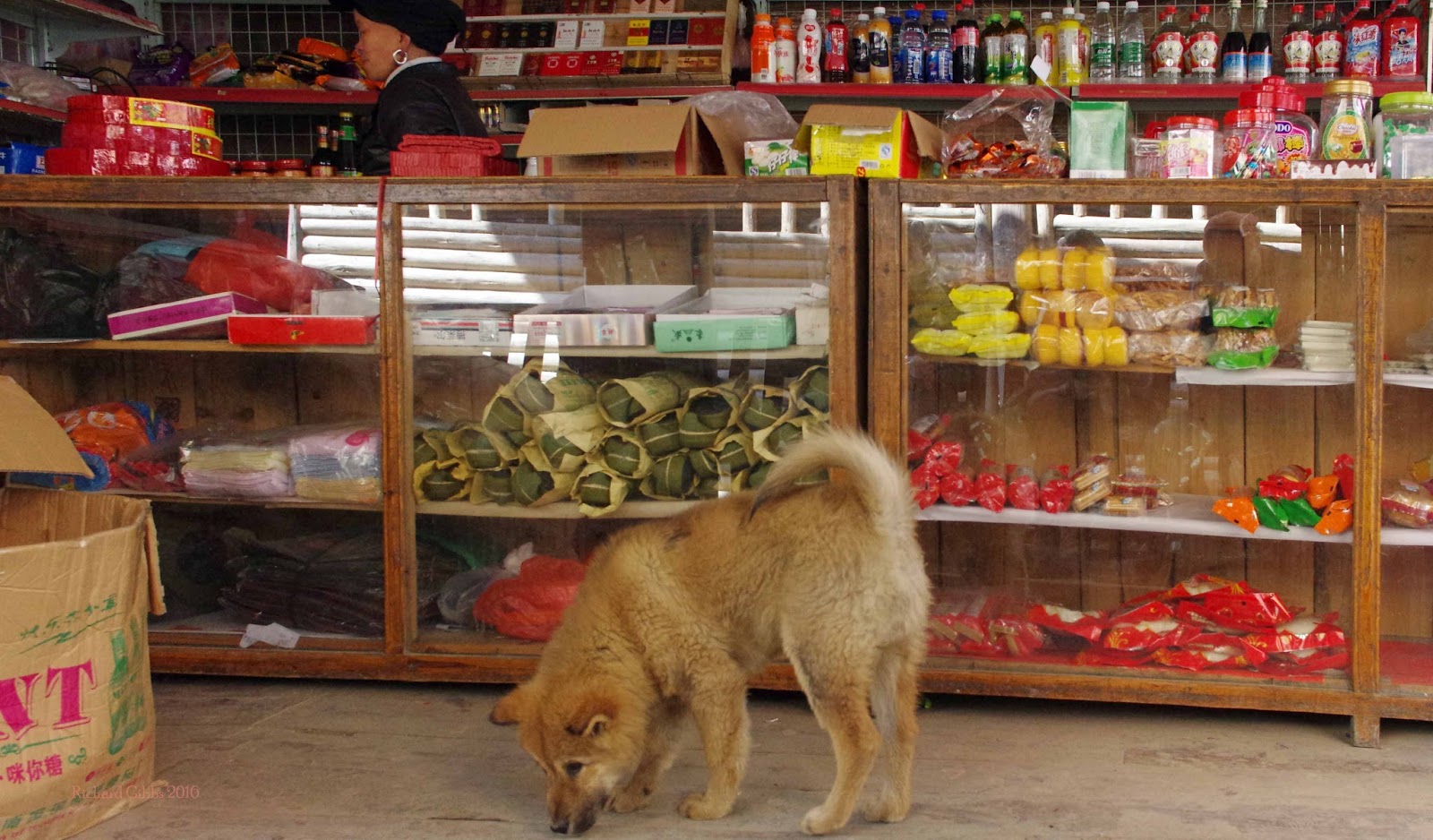 The people here are , and the women bind their uncut hair in black headscarves.  A commotion erupts as a chicken makes a break for freedom, and everyone joins in a sudden burst of activity.  Then the rooster is in the pot, and we are on our way, toiling up towards 1,200 metres, before dropping back down into Zhuang territory. 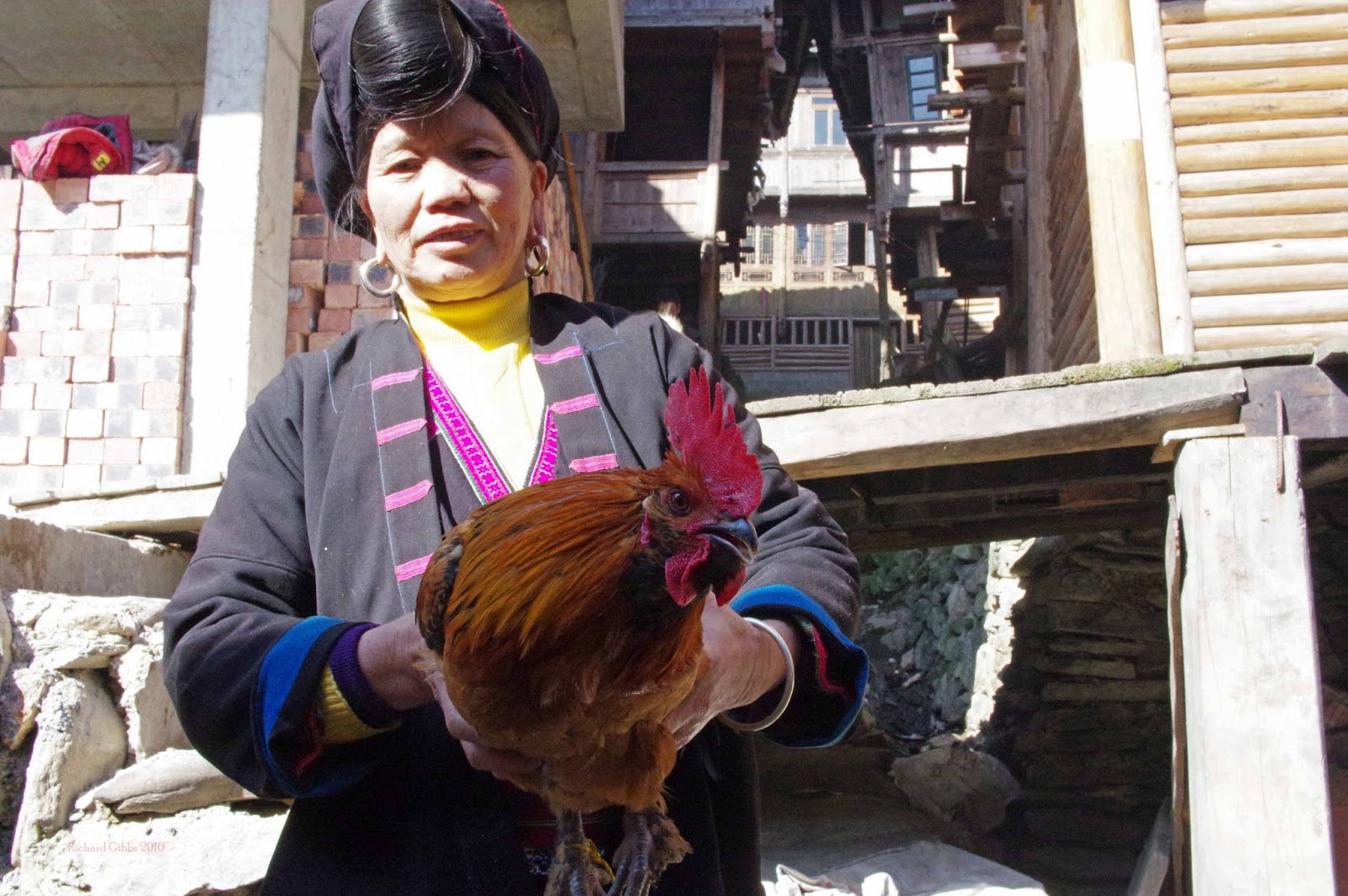 It’s late when we pass Tiantou, and getting dark when we arrive in Dazhai.  Our progress has been slow and we are tired and hungry.  Our host, Qin, transports us back to Ping’an, where he and his wife have prepared a New Year’s meal. 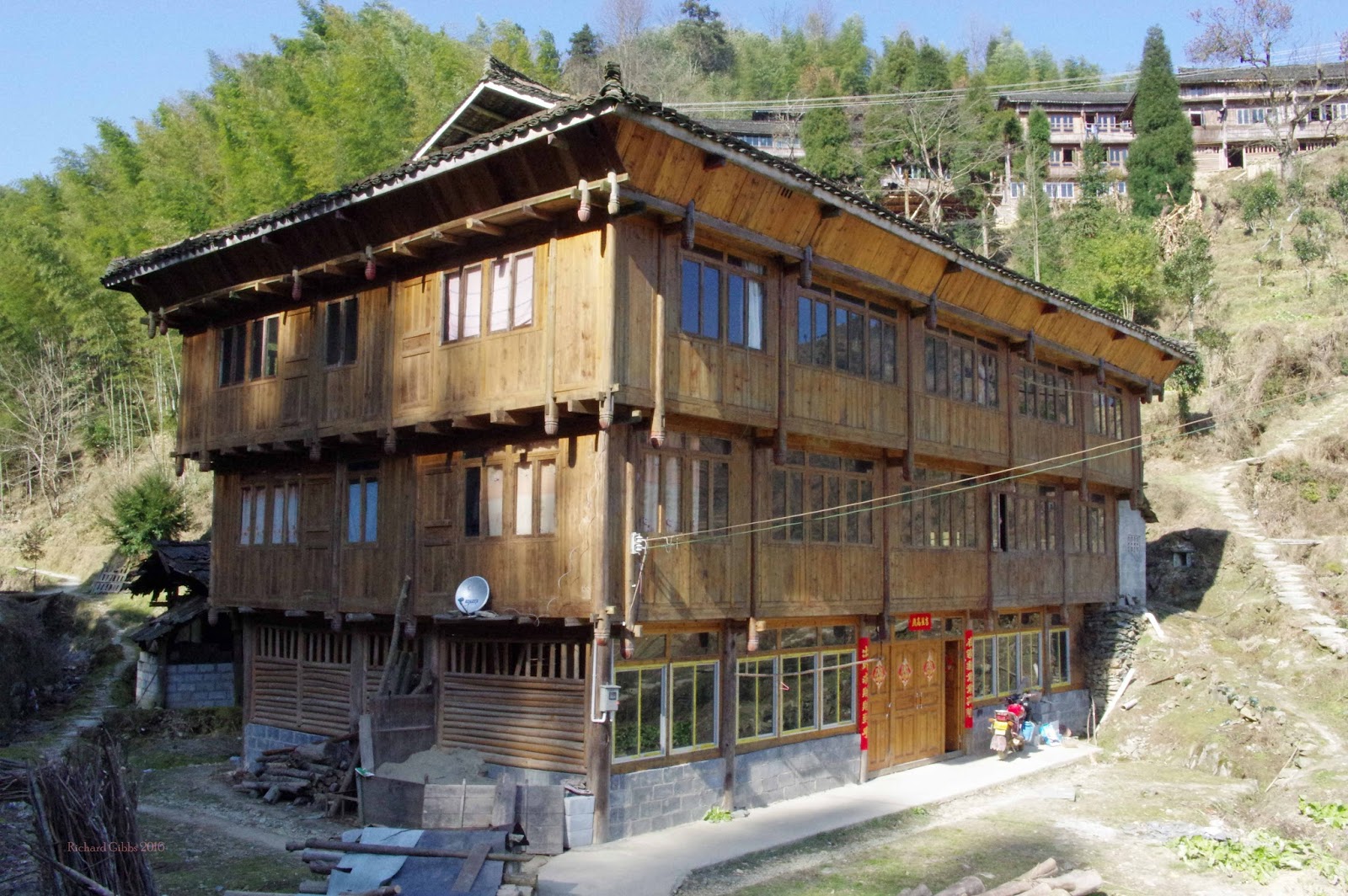 After the scenery of the day, the chicken hotpot dinner, with purple sweet potato noodles, is very welcome, and the conversation dances around Chinese dynasties, and personal histories (Qin’s father was a friend of Lin Biao, Mao Zedong’s right-hand man - who died mysteriously in 1971 –  and he was executed by the regime) while raising our glasses of excellent Changyu red from Shandong, and sorghum-based Baijiu to the New Year. 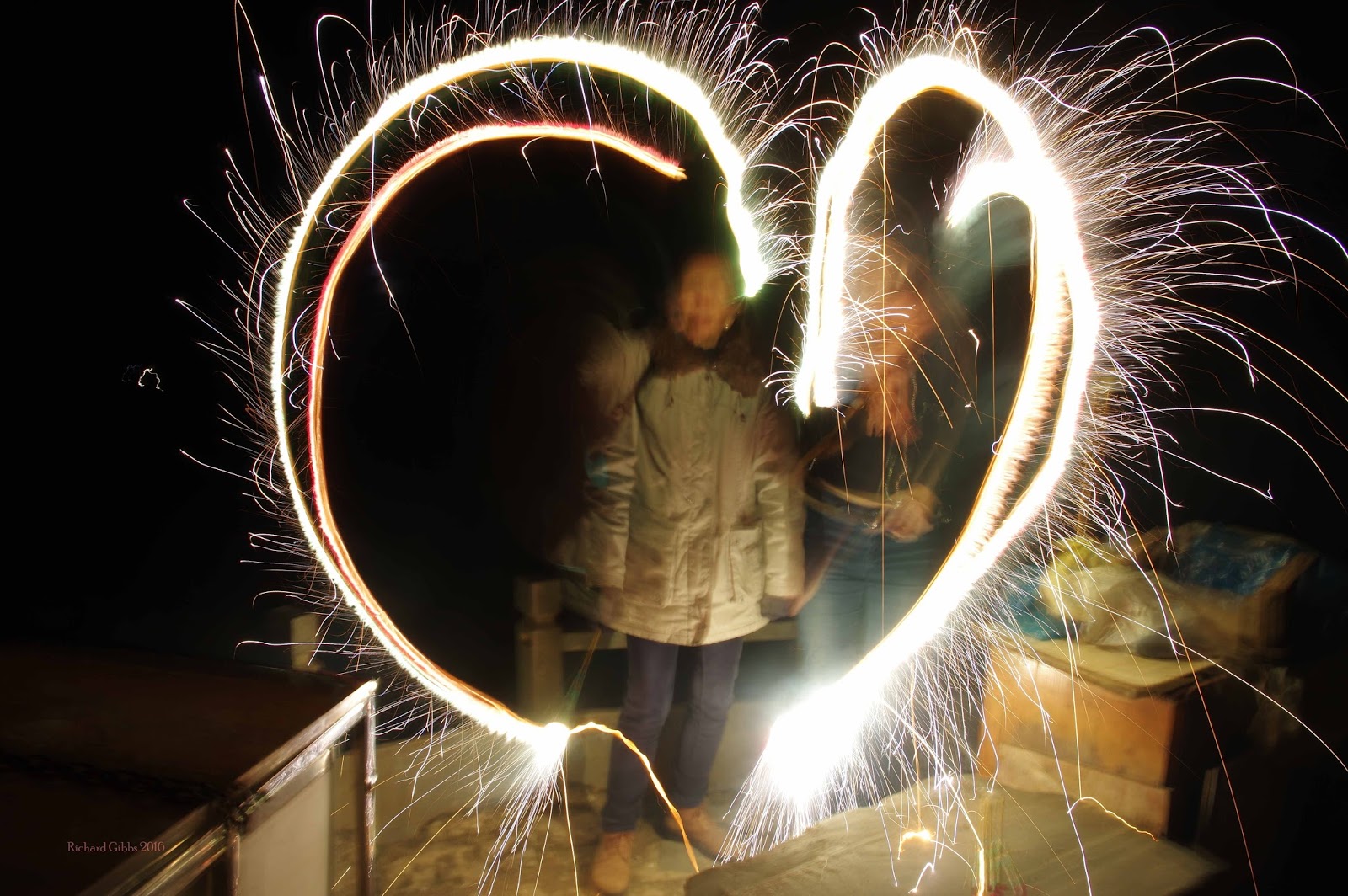 Then as we fall towards sleep the rooftops are flashing and the crackling of firecrackers inform my dreams. 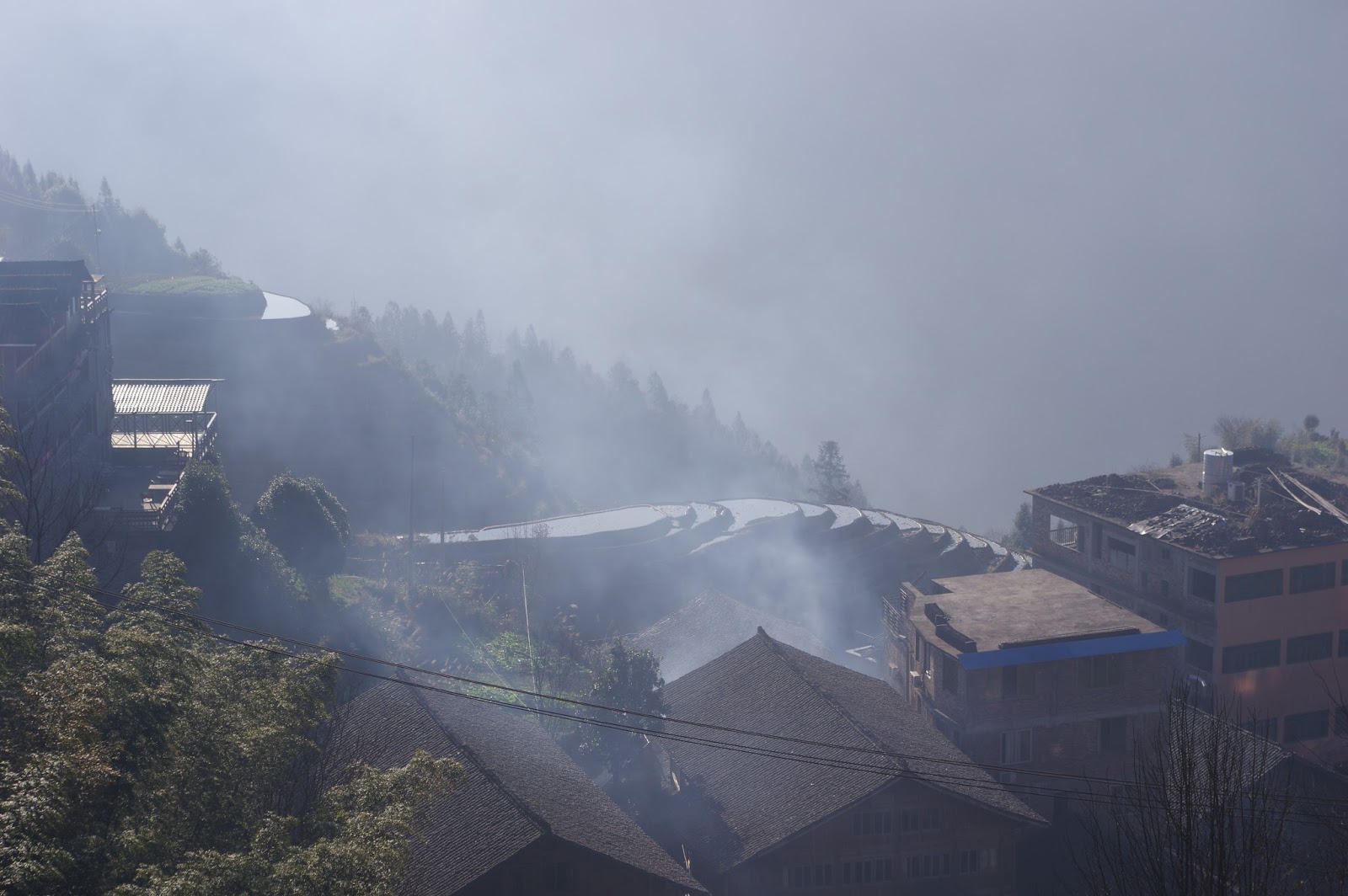 We are woken by gunfire.  Automatic weapons rattling in the streets below at dawn.  Where?  What?  Why?  Surely at 800 metres in remote it cannot be terrorism? 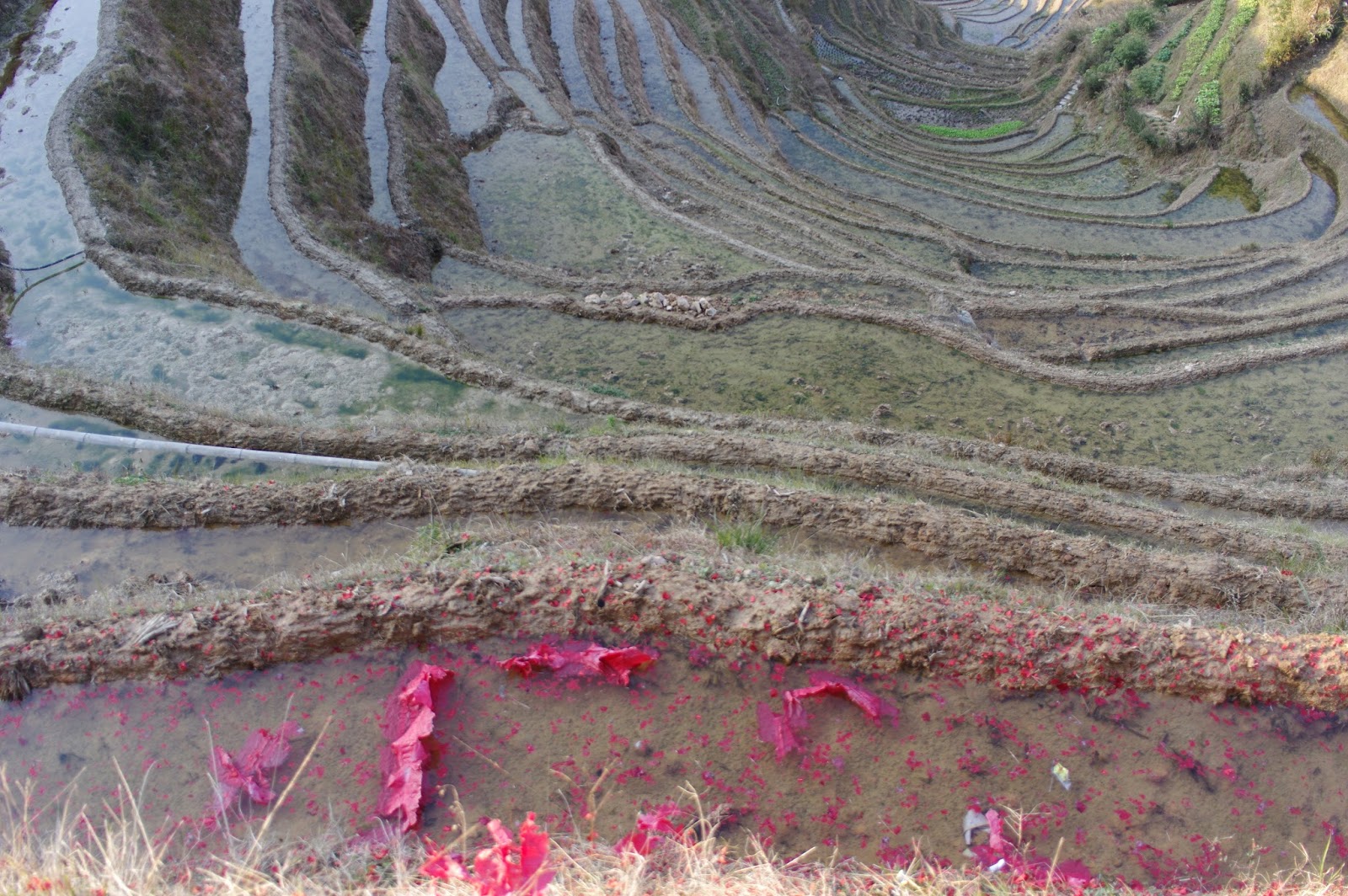 I look out from our verandah.  Blue smoke rises beyond the grey tiles.  Cockerels complain to the rising sun.  Another shattering explosion of gunpowder, and then I remember. 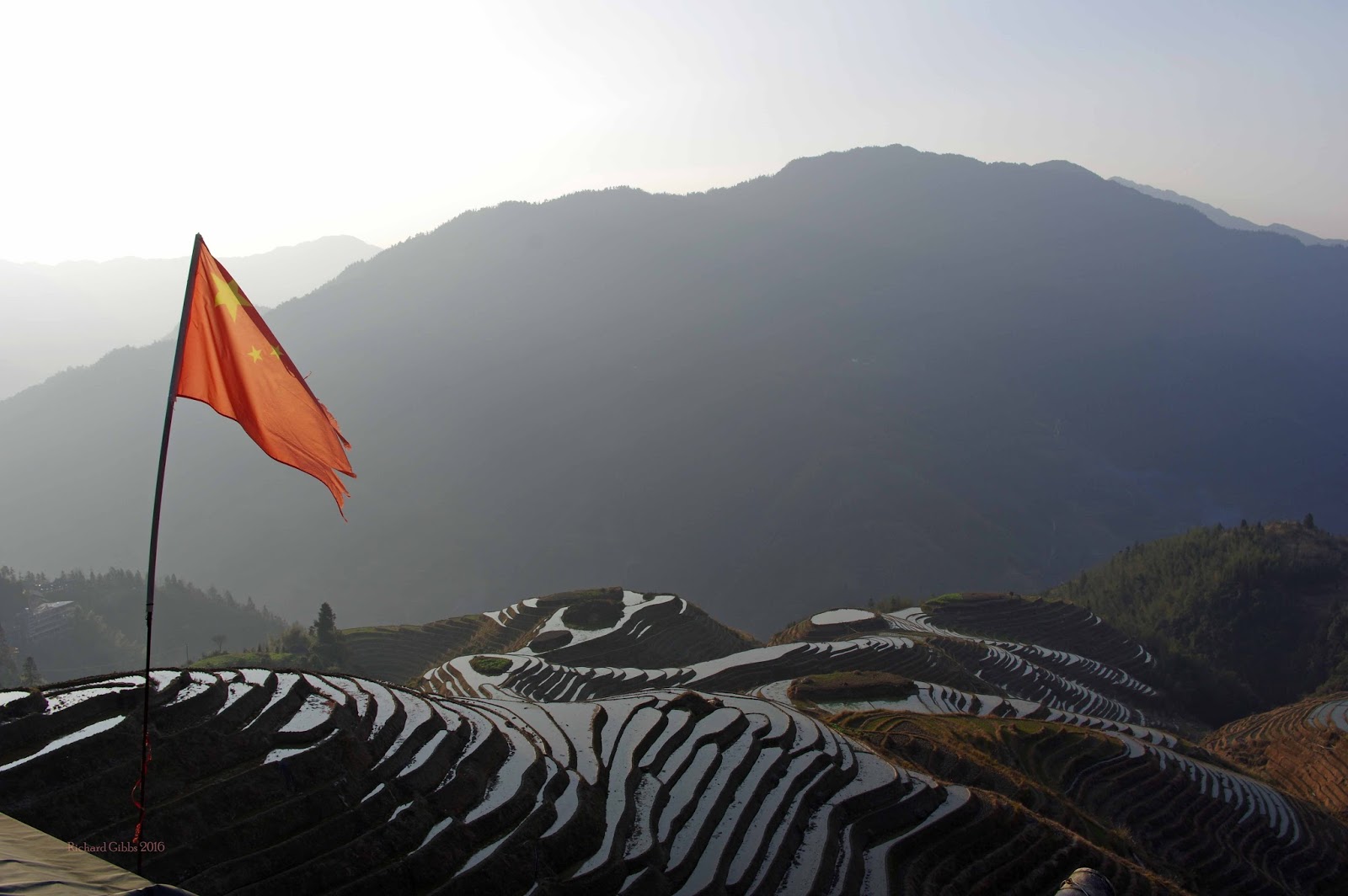 Not gunfire.  Not terrorism.  The Year of the Monkey has begun. 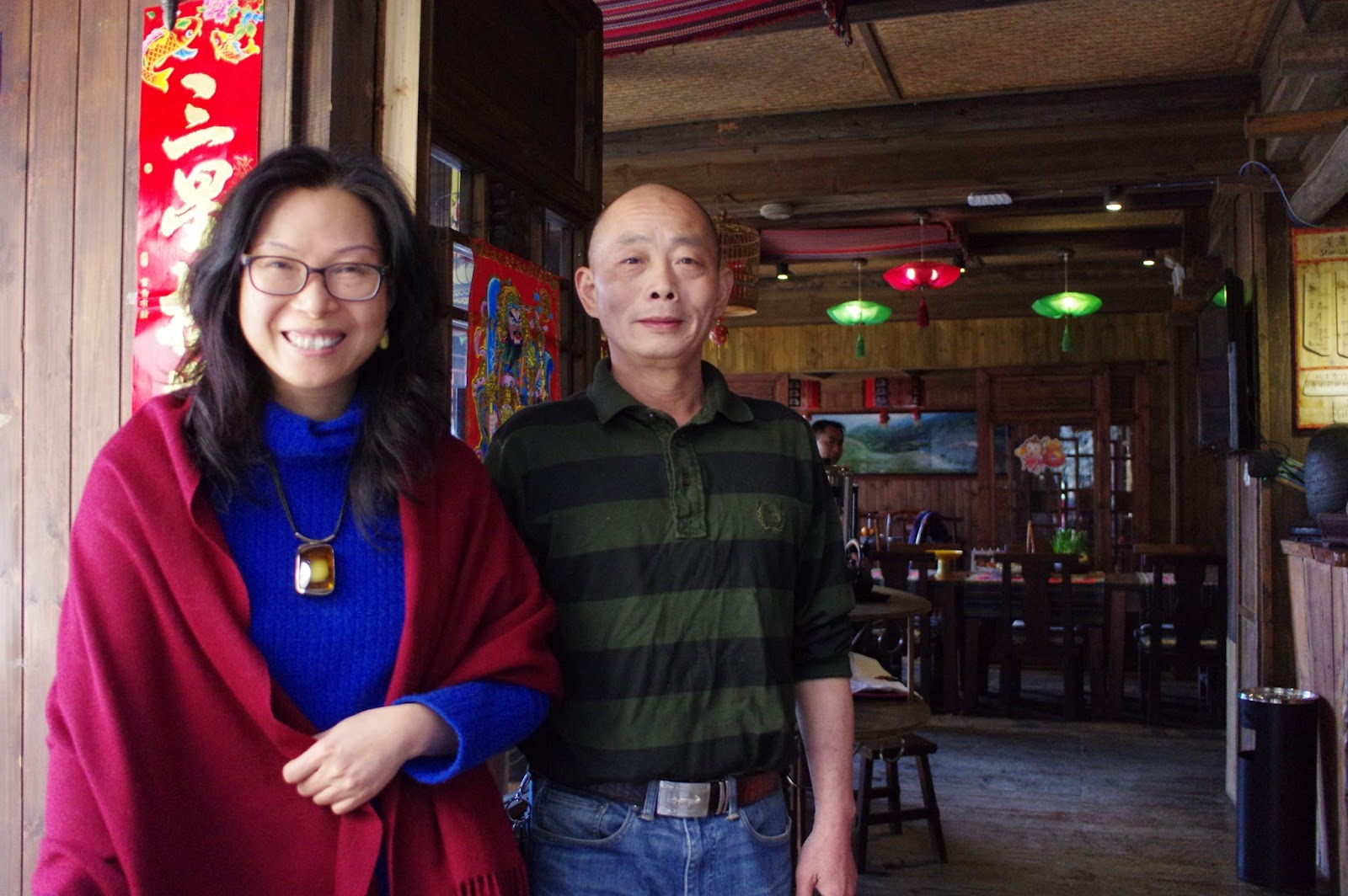 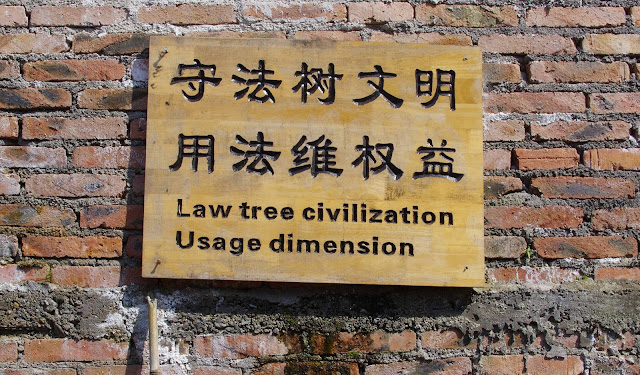