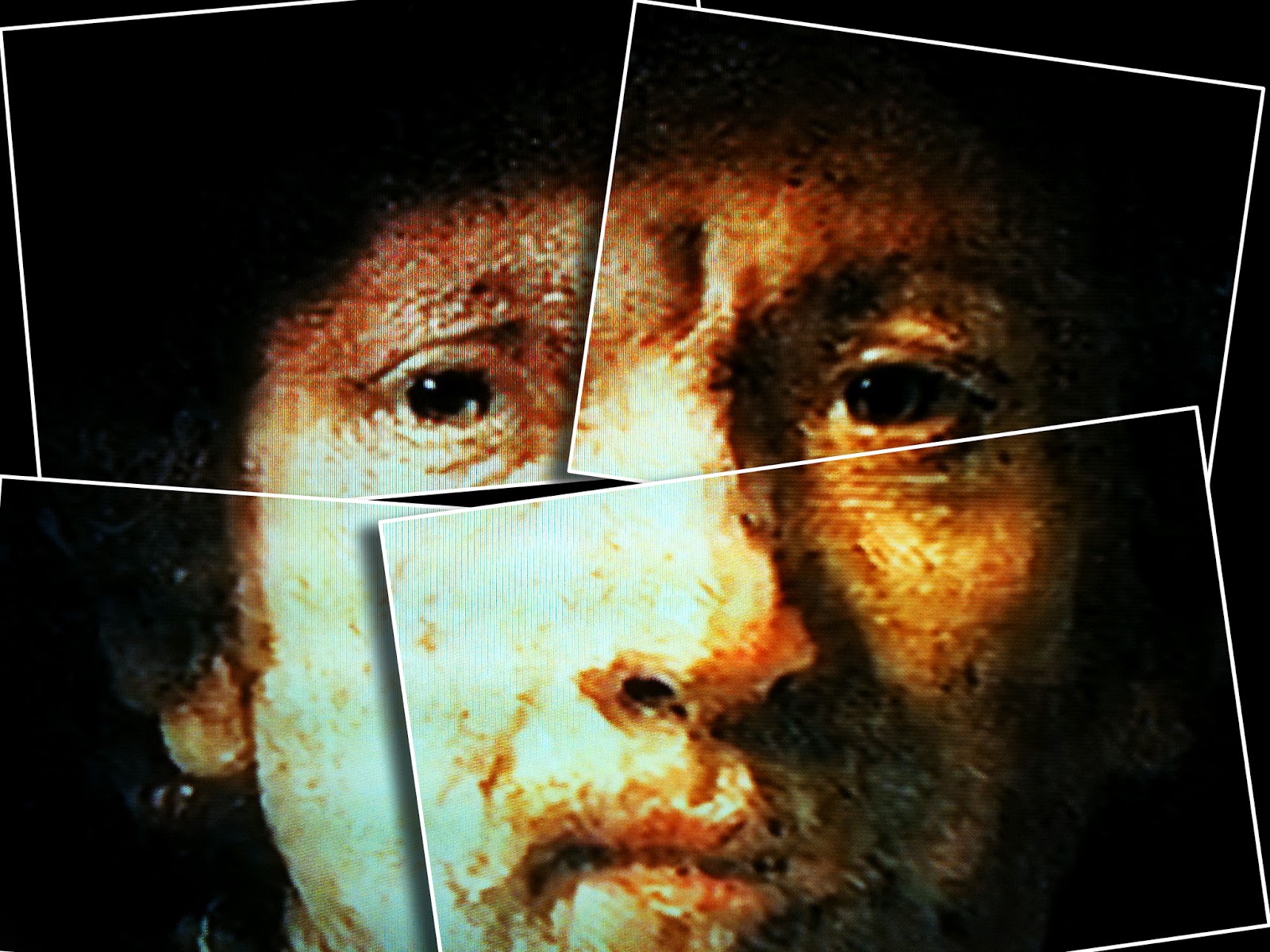 Betsy Wieseman, Curator of Rembrandt: The Late Works at the National Gallery (until January 18th, 2015), says:

Even three-and-a-half centuries after his death, Rembrandt continues to astonish and amaze. His technical inventions, and his profound insight into human emotions, are as fresh and relevant today as they were in the 17th century.

The works in this exhibition are amazing. Rembrandt’s later years were turbulent and marked with controversy, but they also produced some of his most soulful, deeply moving and strikingly modern works. 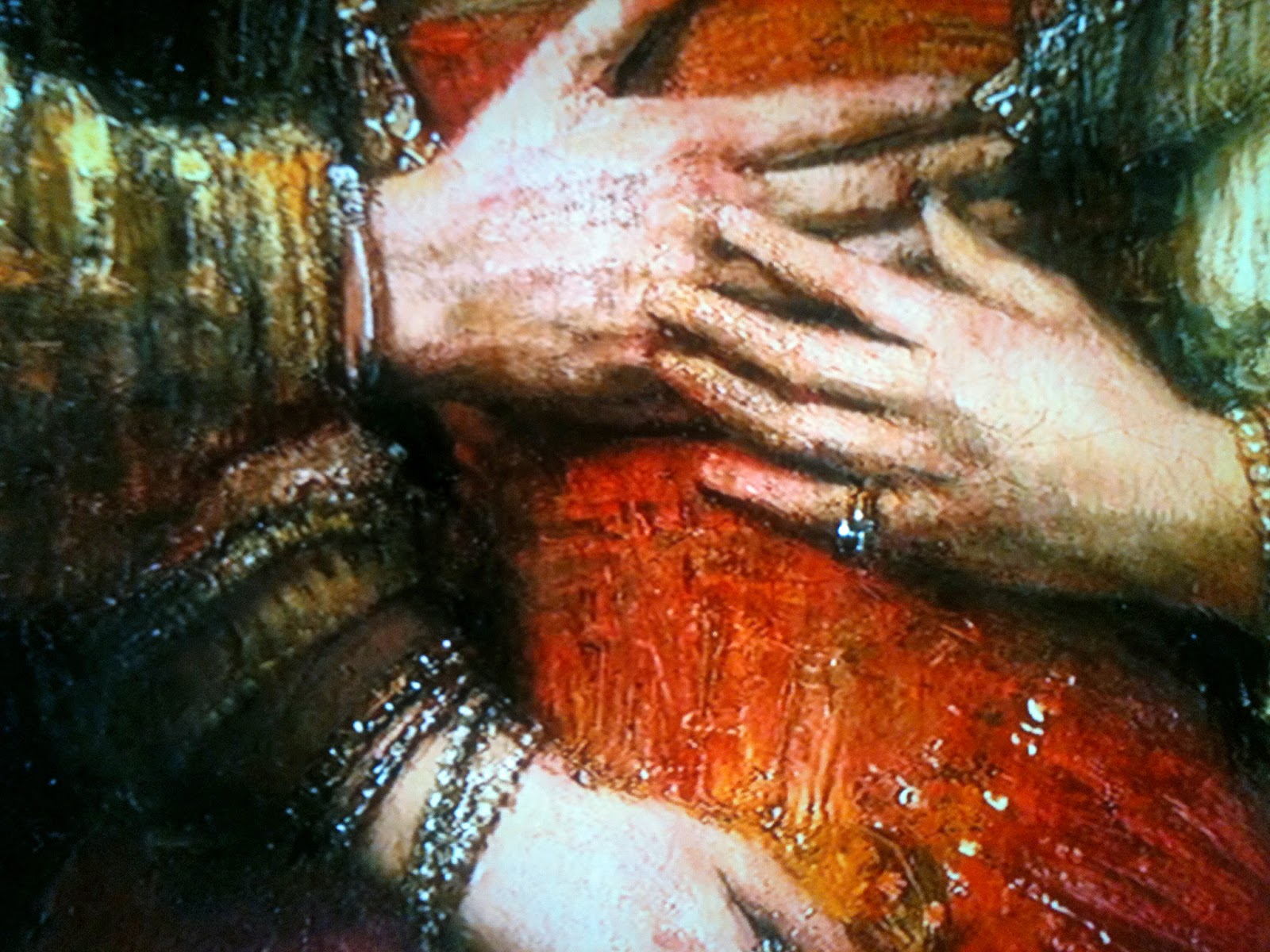 The man's sleeve, with its heavy jewellery of impasto nubs catching the light is one of the most famous passages of painting in art and to see it here is to understand why people crossed Europe to witness the way Rembrandt turned paint into gold.....

He also turned paint into blood, and the two paintings here displayed of Lucretia, who killed herself in front of her father and husband after confessing that she had been raped by Tarquinius, are amongst the most emotionally disturbing I have ever seen.  The first, painted in 1664, shows her about to stab herself, her eyes red with tears, 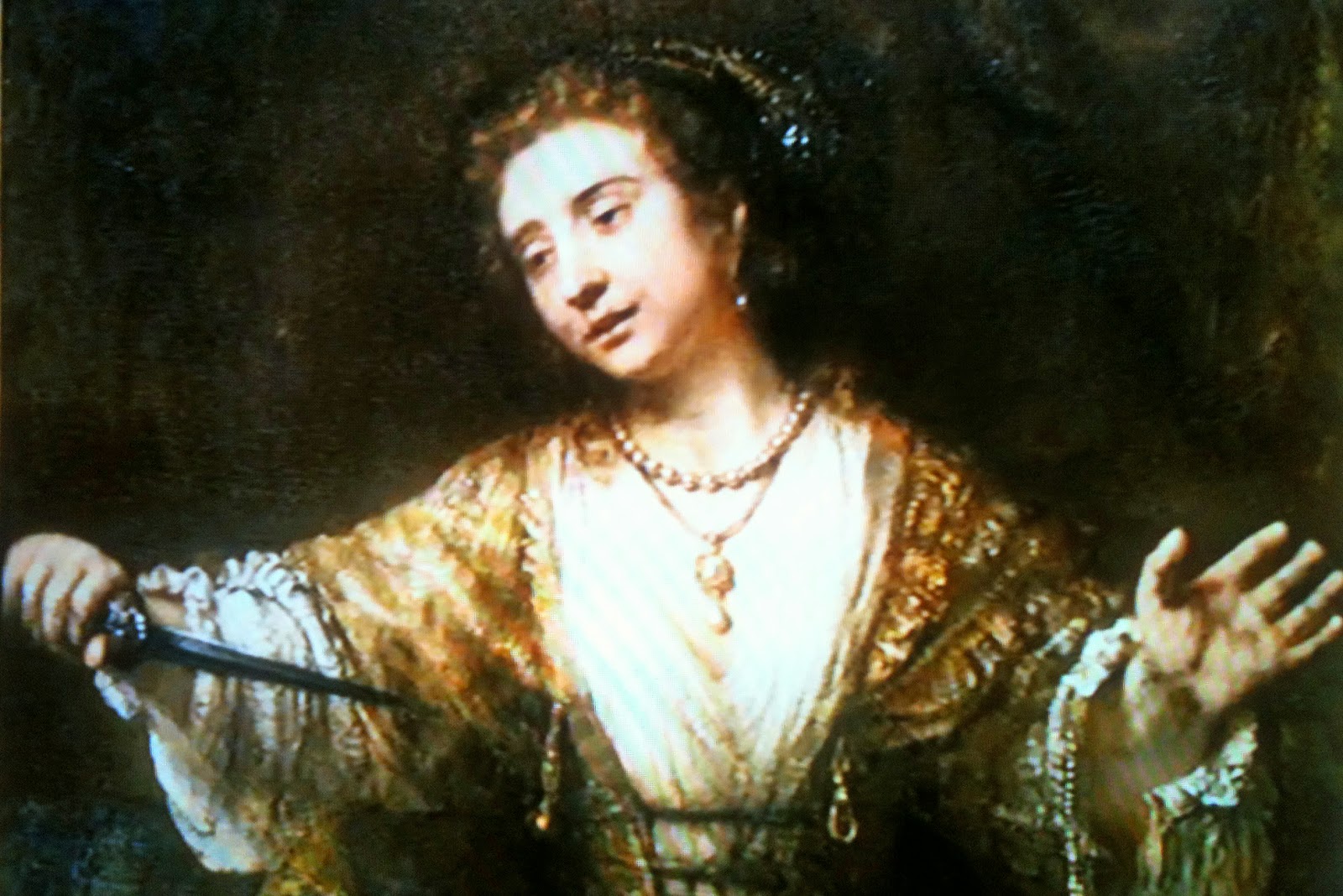 her left hand held up to hold back the watchers.  The second picture, painted two years later, shows her having withdrawn the dagger from her body.

There is nothing like this bloodstain in all the countless martyrdoms of baroque painting.... wrote Simon Schama in The Guardian on October 17th;  nothing that pulses quietly and fatally out of an unseen wound. Rembrandt has even made the folds of Lucretia's shift hang forward on either side of the wound, while between them, in a saturated depression, as if rehearsing the site of her rape, the blood-soaked fabric clings wetly to her skin. 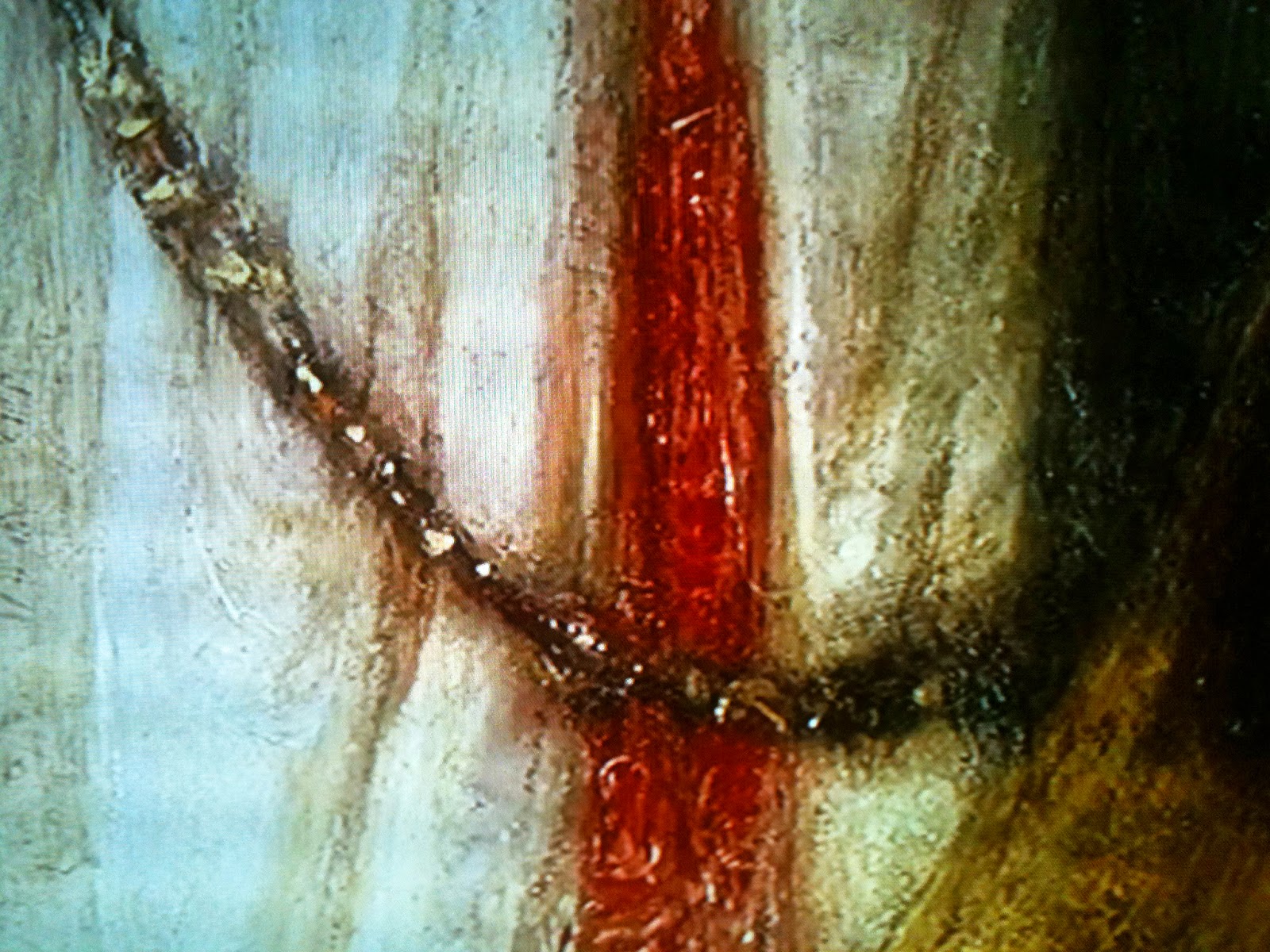 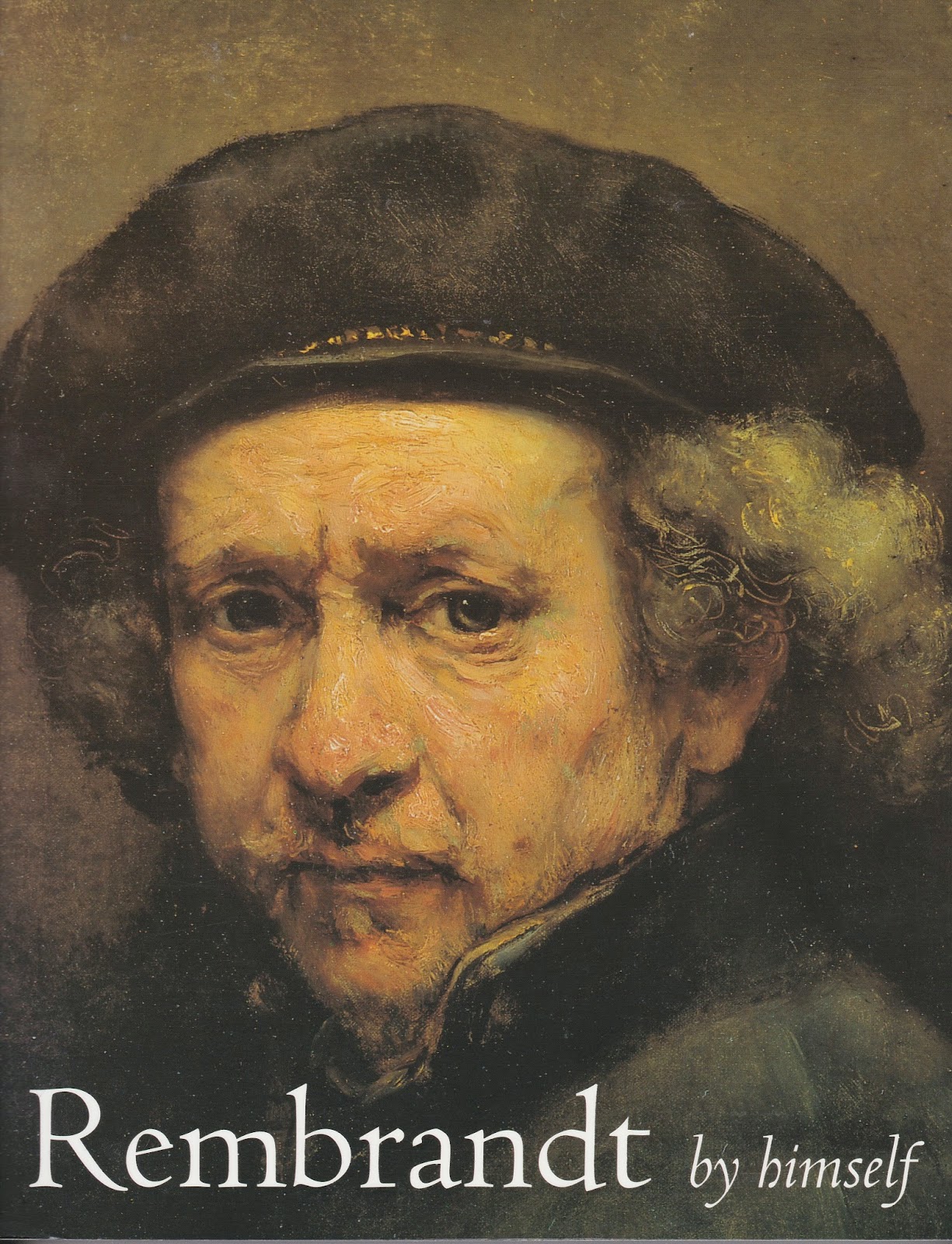 In 1999 the National Gallery held an exhibition entitled Rembrandt by Himself, which brought together over sixty of Rembrandt's at least seventy (possibly eighty) Self Portraits. This was my introduction to the artist, and seeing these works as a group, the paintings, etchings and drawings formed a unique composite portrait  created over a period of forty years.

It was an extraordinary glimpse of a world; of a life. One of a Leiden Miller's seven children, when Rembrandt Harmenszoon van Rijn was born, Shakespeare was only 42, and it would be over a century before Samuel Johnson arrived; Caravaggio was alive and Titian had only been dead thirty years. When Rembrandt died in 1669, London was being recreated from the smoking ruins of the Great Fire, and plague was rife in the Netherlands. 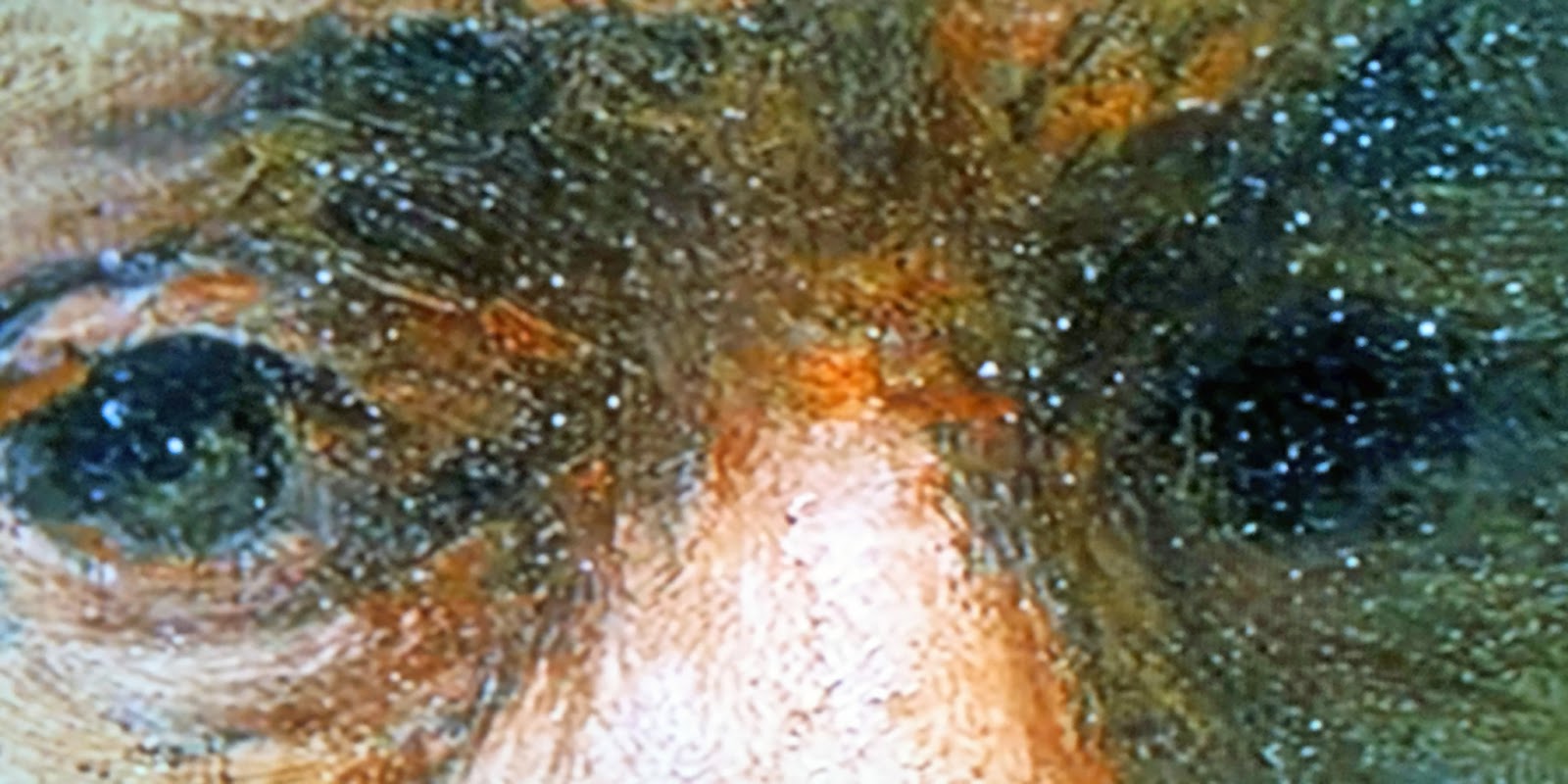 The Self Portrait was a relatively new idea, largely because of developments in mirror technology. Jan van Eyck's Portrait of a Man in a Turban (1433) may have been the first self portrait on a panel. Rembrandt painted The Artist in His Studio on a wood panel in 1629, when he was only 23.  It is an intriguing picture, dominated by the back of an easel, and with more attention given to chipped and crumbling plaster on the wall than to his own face, where his eyes are like currants planted in the gingerbread face (Simon Schama).

A great deal has been written about Rembrandt, and about his Self Portraits, and we know that it was customary to practise portraiture by studying expressions, and by dressing up and copying oneself - it saved time and money and all the hassle of employing models. But Rembrandt's visual chronicles of his own ageing and decay are not the result of economic stringency - though he knew enough of them by the end of his days. 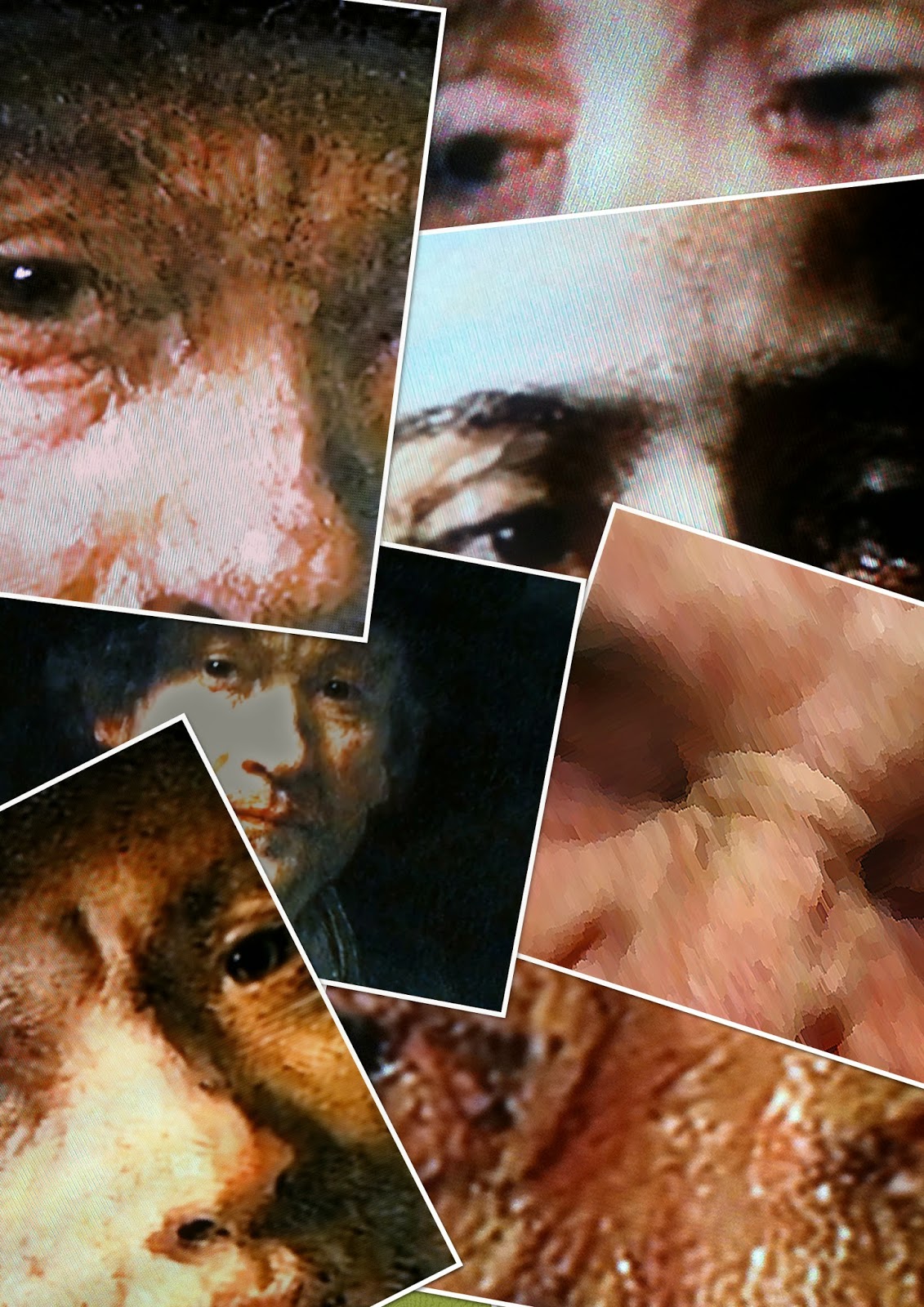 For an artist, the eye is the most important organ. Rembrandt portrayed blindness (Homer, Tobit, Samson) and partial blindness (Claudius Civilis) but this would have been impossible without his vision. He also drew metaphorical blindness, as in his Satire on Art Criticism (1644) where the venomous critic has dropped his pair of glasses at his feet. 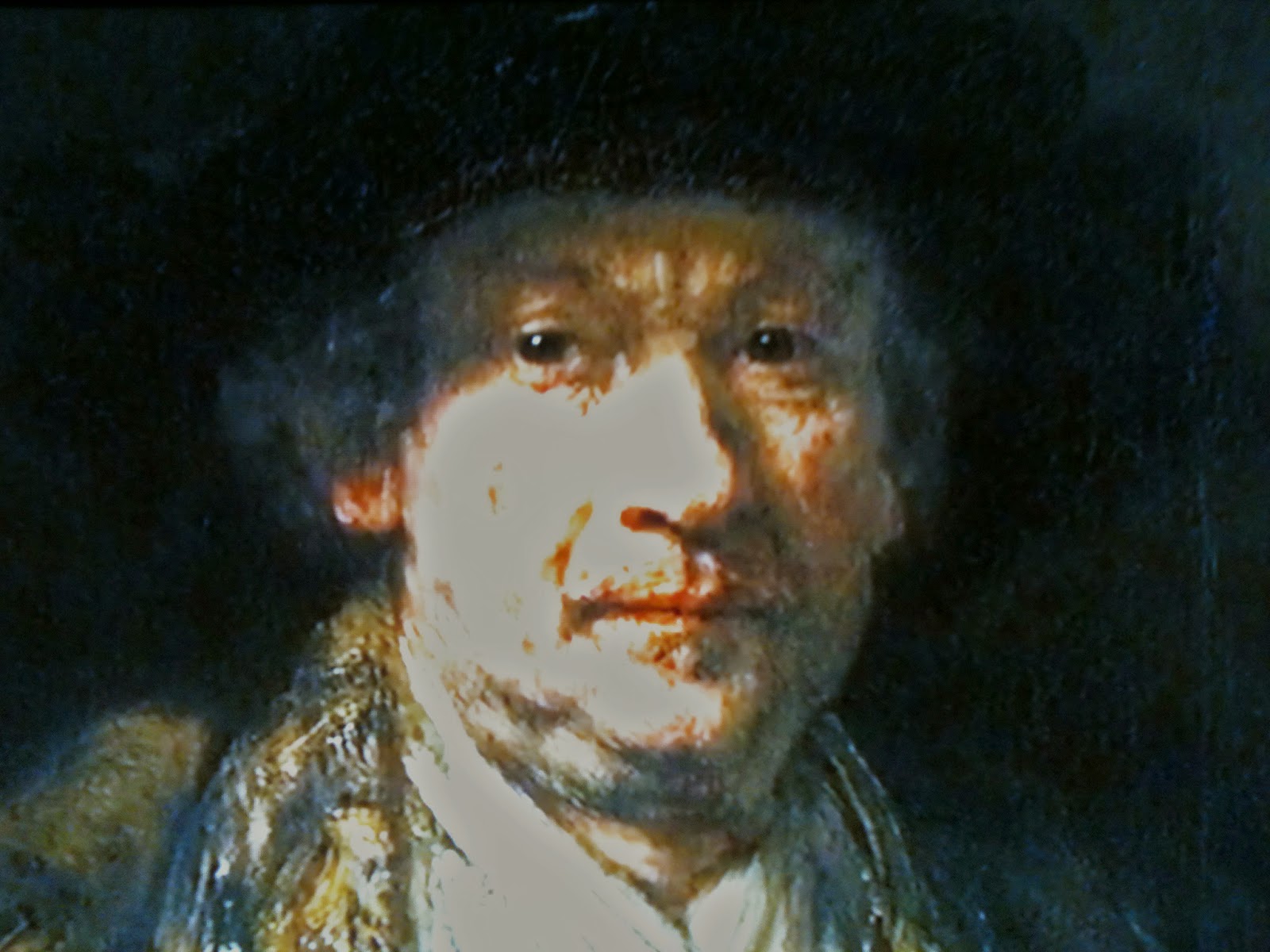 So it is reasonable to think that Rembrandt thought about ways of seeing.  He may not have ever seen a work by El Greco, who died in 1614, but he would have realised through his own work that artists see things differently from others - indeed, there is no surety that what anyone sees is exactly what another perceives.  The physical production of colour was an integral part of a painter's work, but as he also worked with pen and ink, chalk, washes, etching and dry point, he knew that creative art played with light and dark, as much as with green or red. And he also knew that in making a two-dimensional representation of something with three dimensions he was distorting reality. 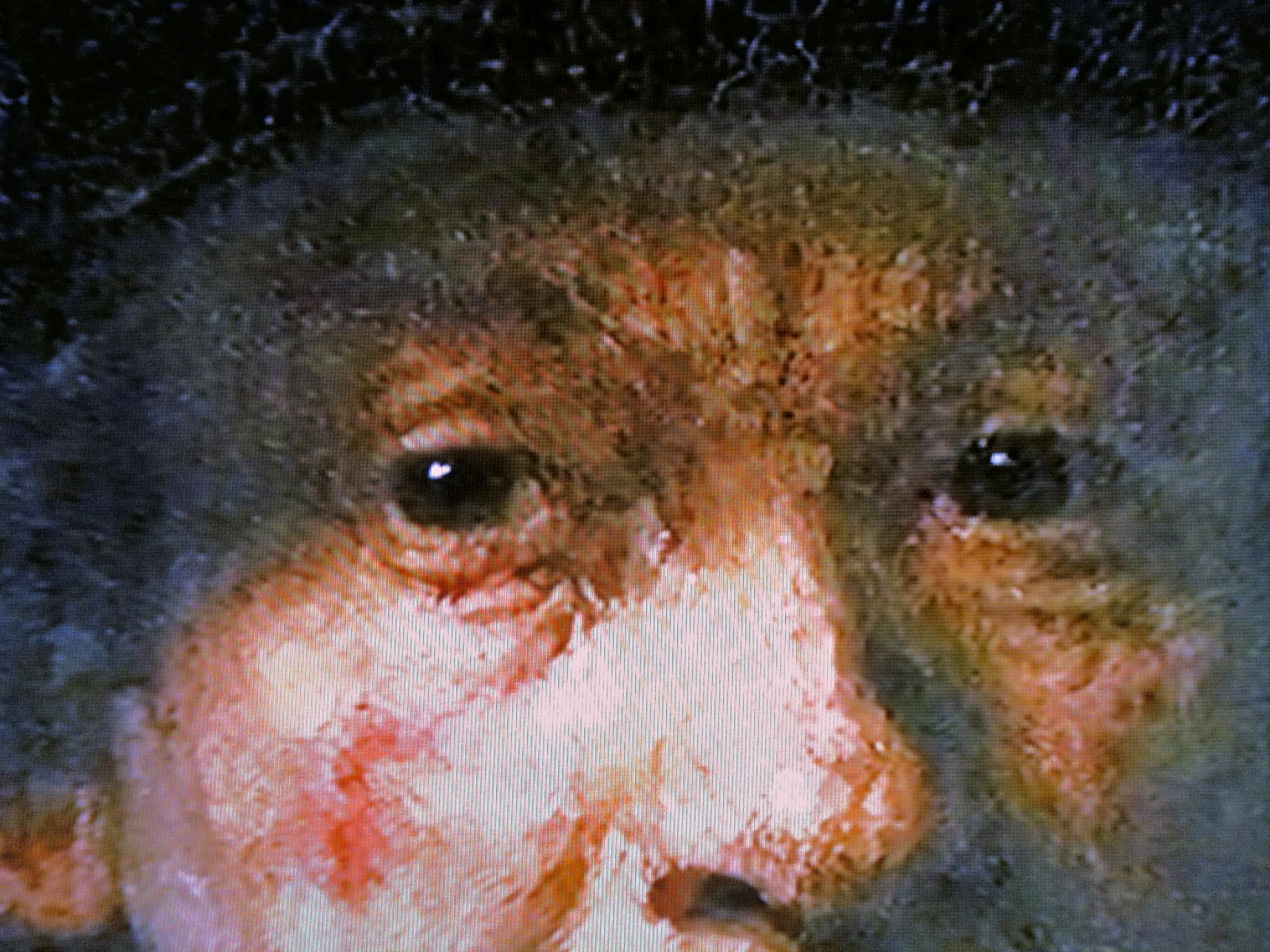 So when he posed in front of his mirror, and stared at himself staring at himself, was he staring into his soul?  Or was he, through the trick of reflection, staring at the voyeur?  Was he examining himself?  Or was the outside onlooker his real subject?

We can see in his self portraits that he knew it was difficult to portray his own hands, as they were active in the production of the picture (and therefore often blurred, or hidden), and we know that the confusion of reflected left to right was taken into account,  What we don't know is what he was thinking, nor what he really saw. 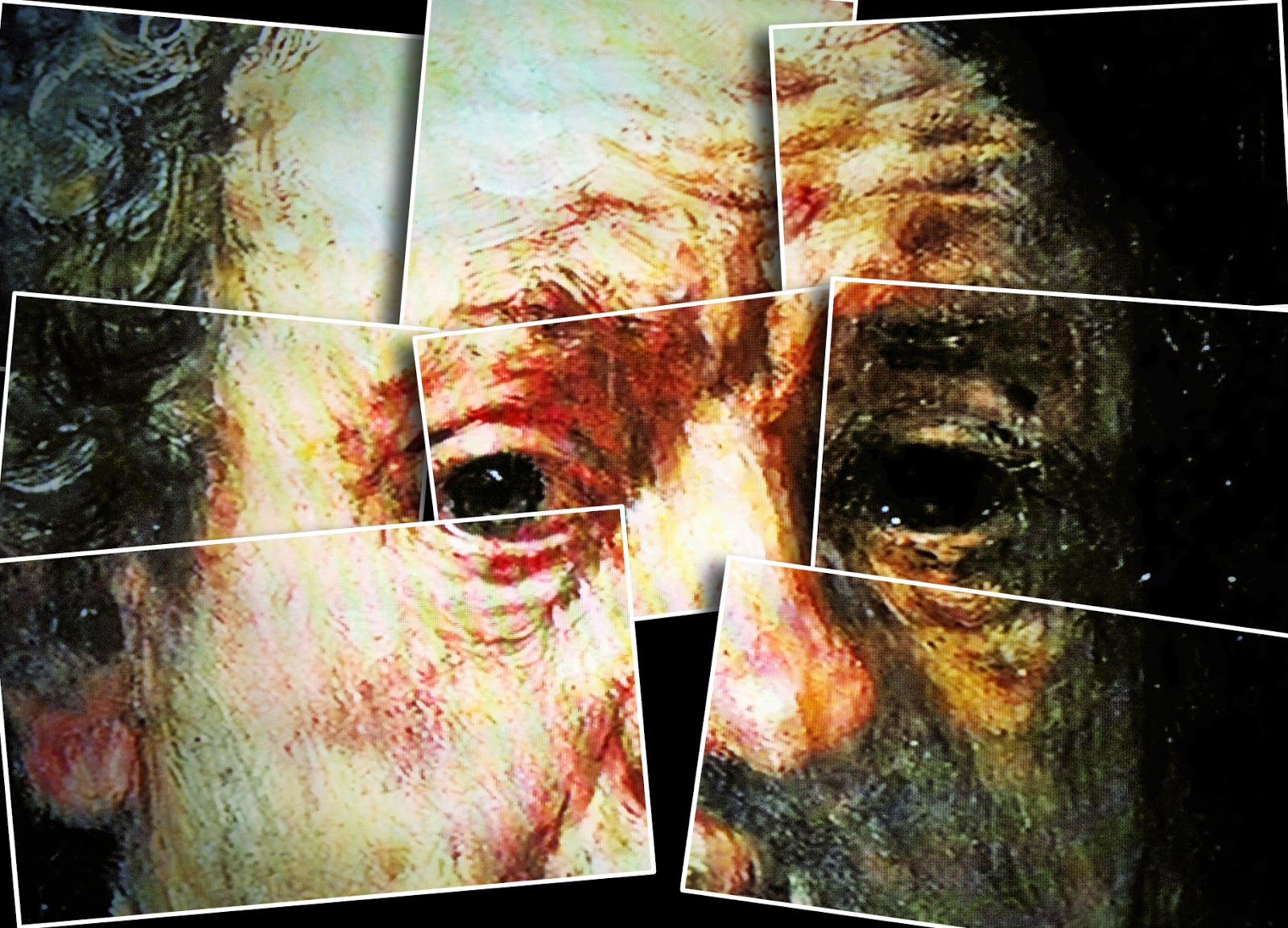 Towards the end of his life he produced what some claim to be his masterpiece - the Kenwood Portrait. In this self portrait he stands before a wall on which we see two circles. One theory is that he is here representing the perfect circle, as drawn by Giotto to convince his pope that he was the finest artist.  It is a mark that only a human can make, and only a highly skilled human at that. 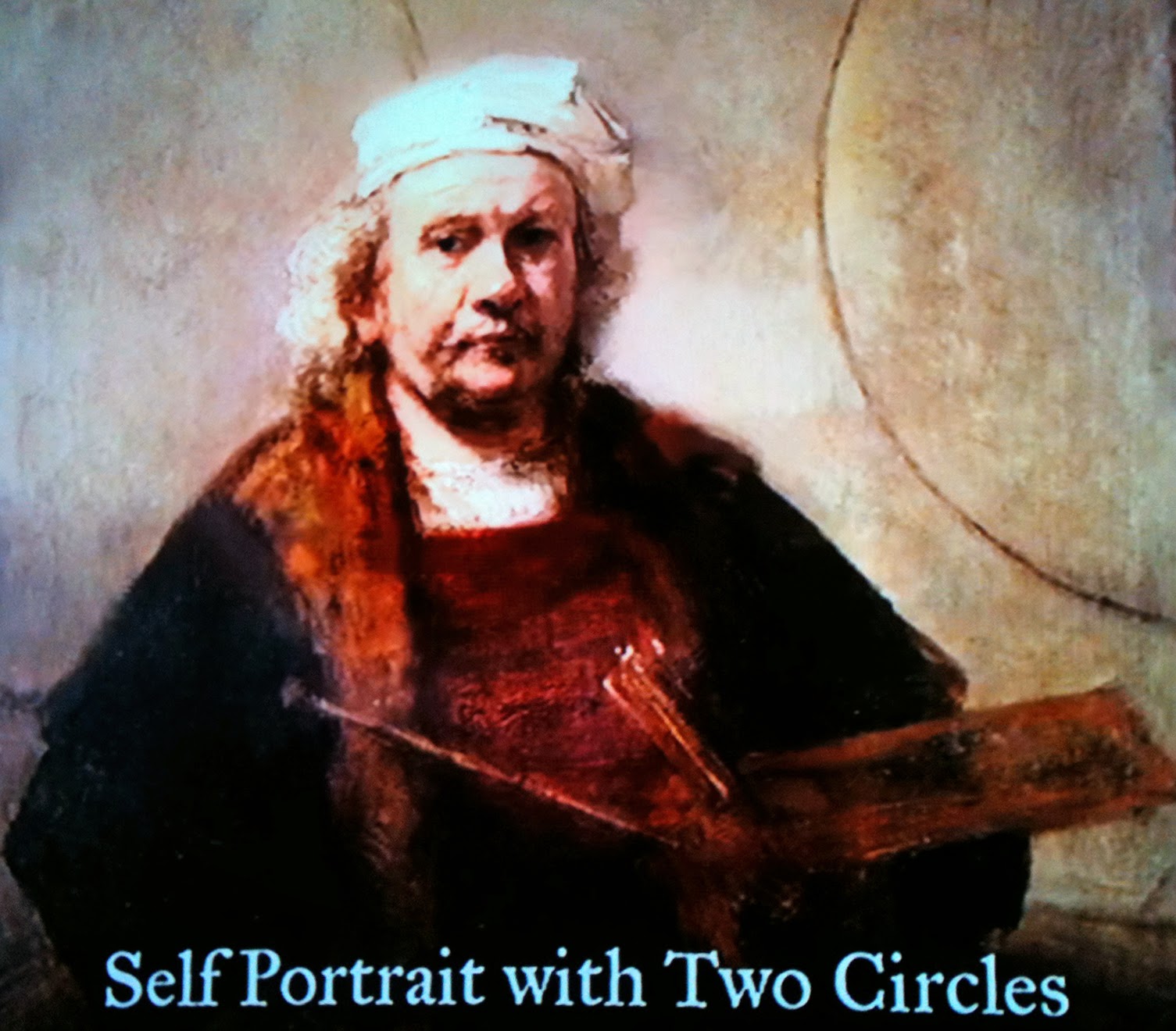 But the circles are also the cycle of life and death, and the never-ending nature of God.  They are also eyes, looking over Rembrandt's shoulder, looking at us.

Jonathan Jones, writing in The Guardian on November 21st, 2013, asserted that His eyes contain  so much knowledge and melancholy that even looking at this painting on a computer screen, I get the eerie feeling that Rembrandt is looking back and weighing up my failures..... 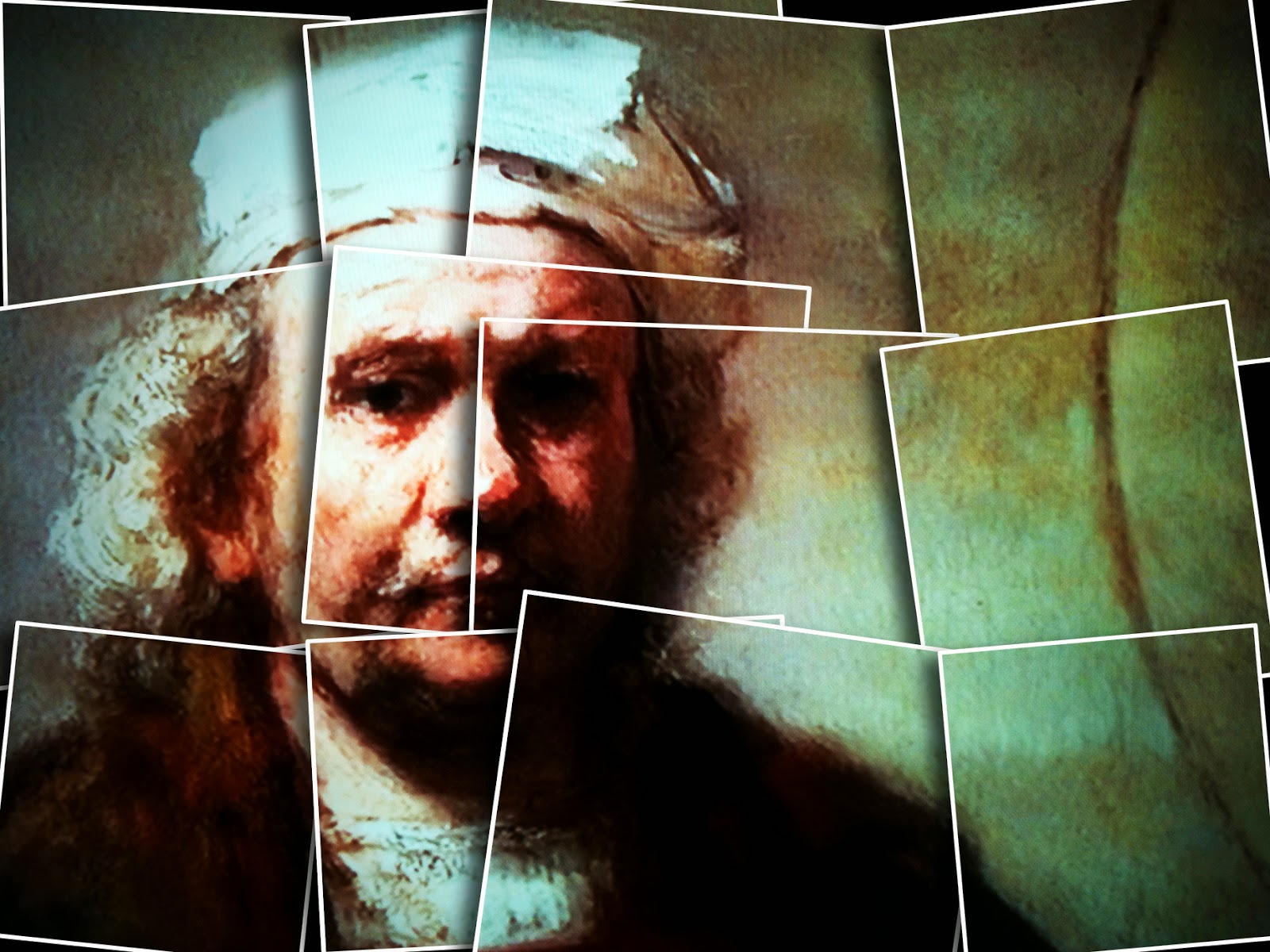 He was a failure when he painted this, a proud man reduced to poverty by his enthusiastic spending - but here he throws it back on the burghers of Amsterdam.  Art is not a business; it is a struggle with eternity.  Rembrandt stands not proudly or arrogantly, but in the full consciousness of the heroic nature of his work. 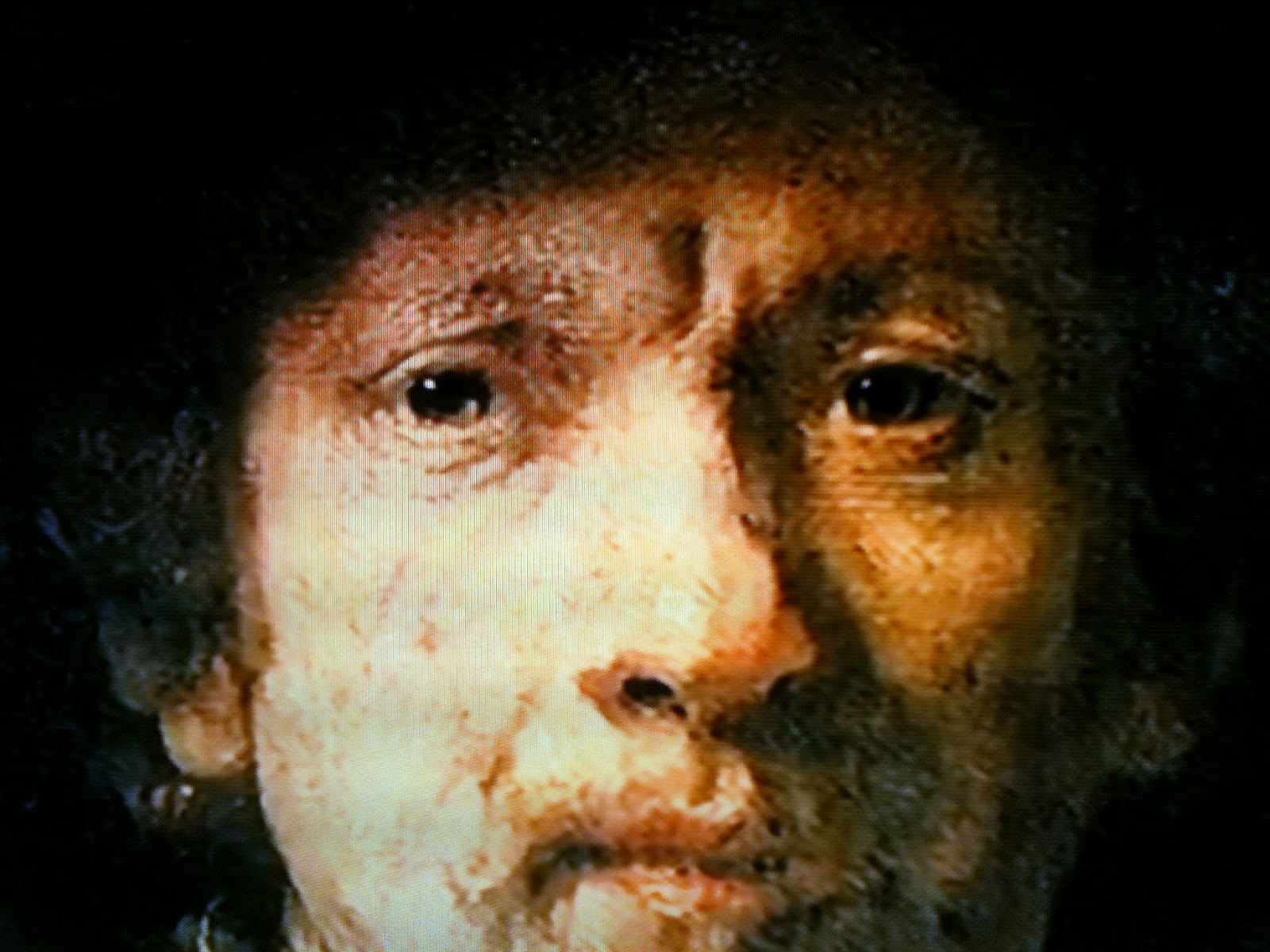 In reviewing the current exhibition at the National Gallery for The Guardian, Jonathan Jones also wrote that Rembrandt learned so much from his failures, his humiliations.  He learned that we are all equal......

And that is why Rembrandt looks us in the eye, perhaps with love.  Jenny Judge, also writing in The Guardian, this October, said that He wanted us to remember him -  as an artist, certainly, but also as a man; bereaved, lonely perhaps, but undeniably proud.  This is why Simon Schama calls him an everyman; in his face, so carefully detailed, we see countless other personae.  We look at him, as he looks at us, and we feel that we understand him. 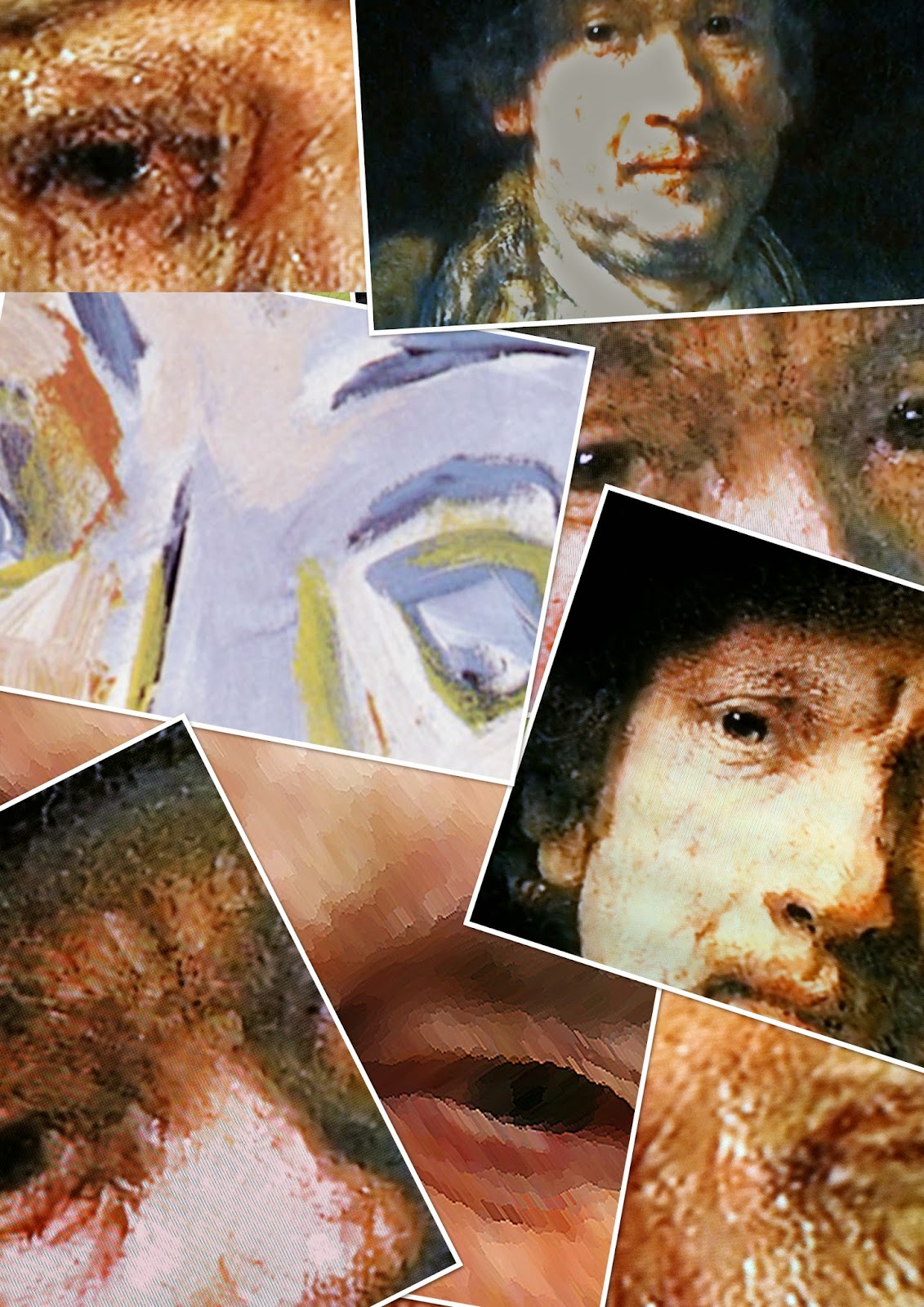 The final paintings are monuments of truth. Dark and knotted images that close in on many faces..... From them we learn what it is to be alone, broken-hearted, stricken, contemplative, if we don't already know it..... 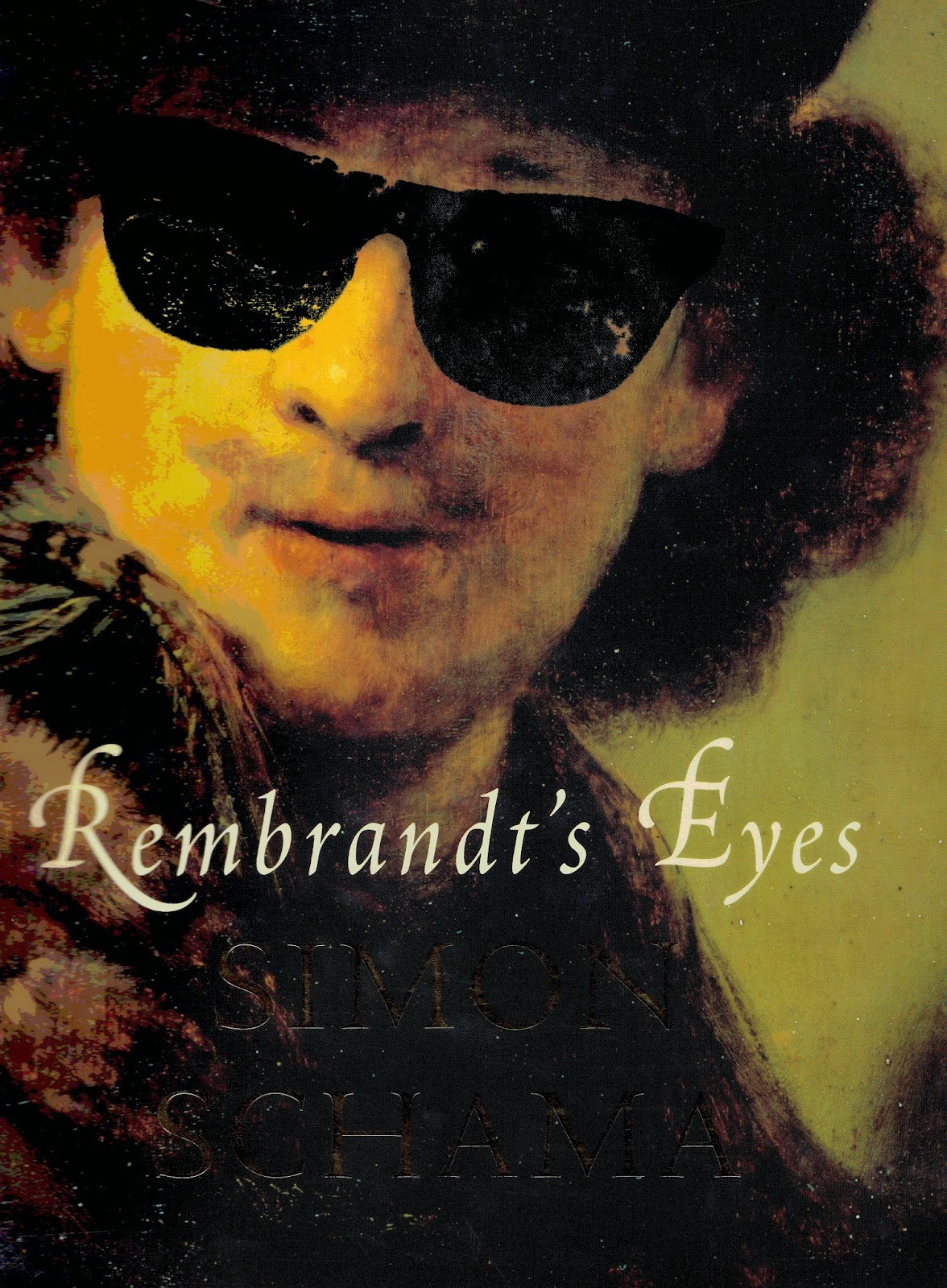 
[photos taken on my eye-phone from the TV]