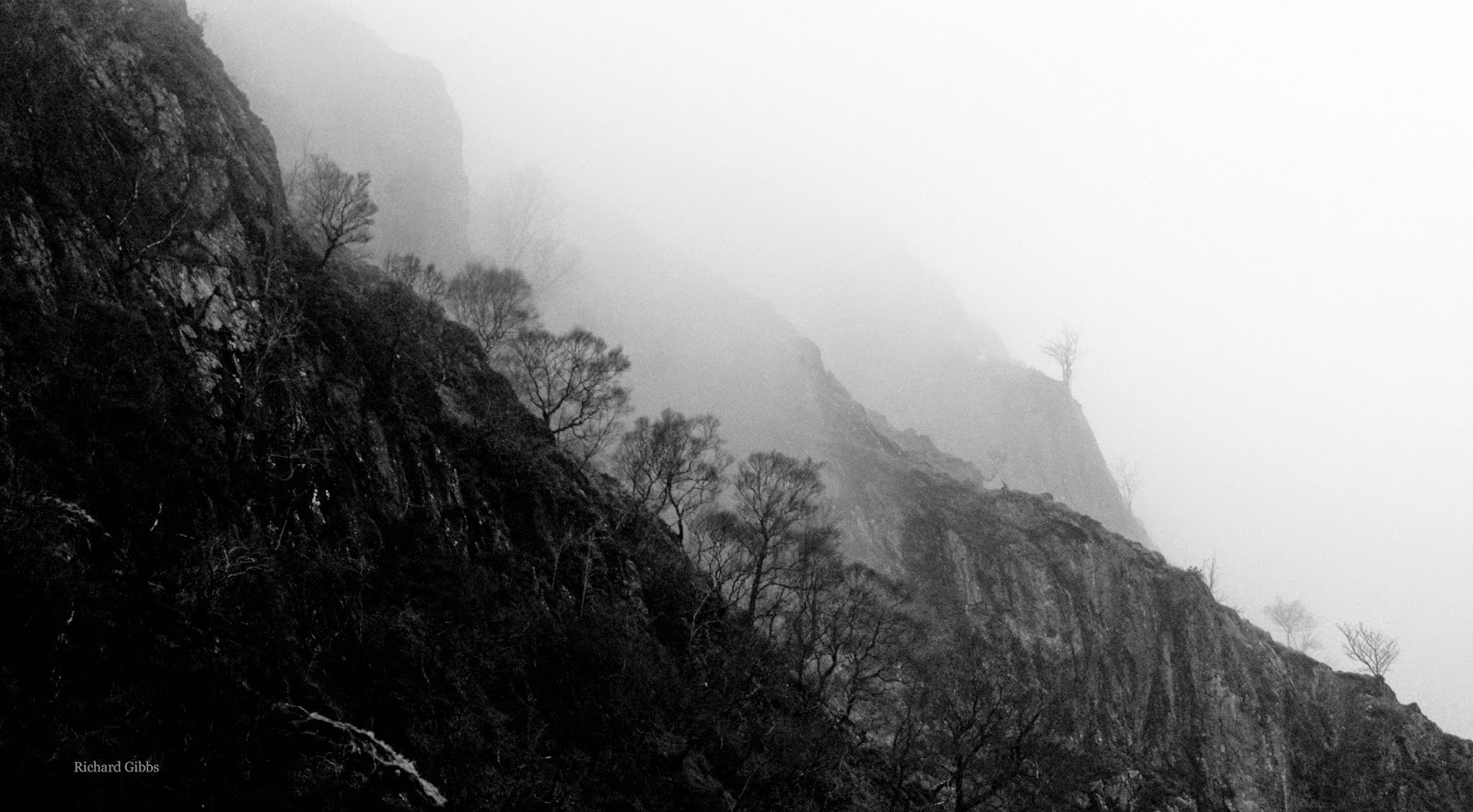 I am in Riggindale, above the head of Haweswater, in the Lake District National Park, Cumbria.  The light is fading fast and low clouds swathe the crags.  Somewhere up there a Golden Eagle sits, quietly minding his own business, possibly watching me, though his indifference may be as massive as the fells.

This unseen watcher is the last remaining Golden Eagle in , and he has lived on these rocks since 2001.  A pair first nested here in 1969, probably attracted by the remoteness of the area and by a supply of deer, sheep and rabbits, and since then sixteen eaglets have fledged, reared by a changing combination of adult birds.  Until 2004 this male had the company of a mate, though they were unsuccessful in breeding.  Now he is middle-aged, and his springtime displays seem less enthusiastic, though perhaps hope springs eternal even in the aquiline mind. 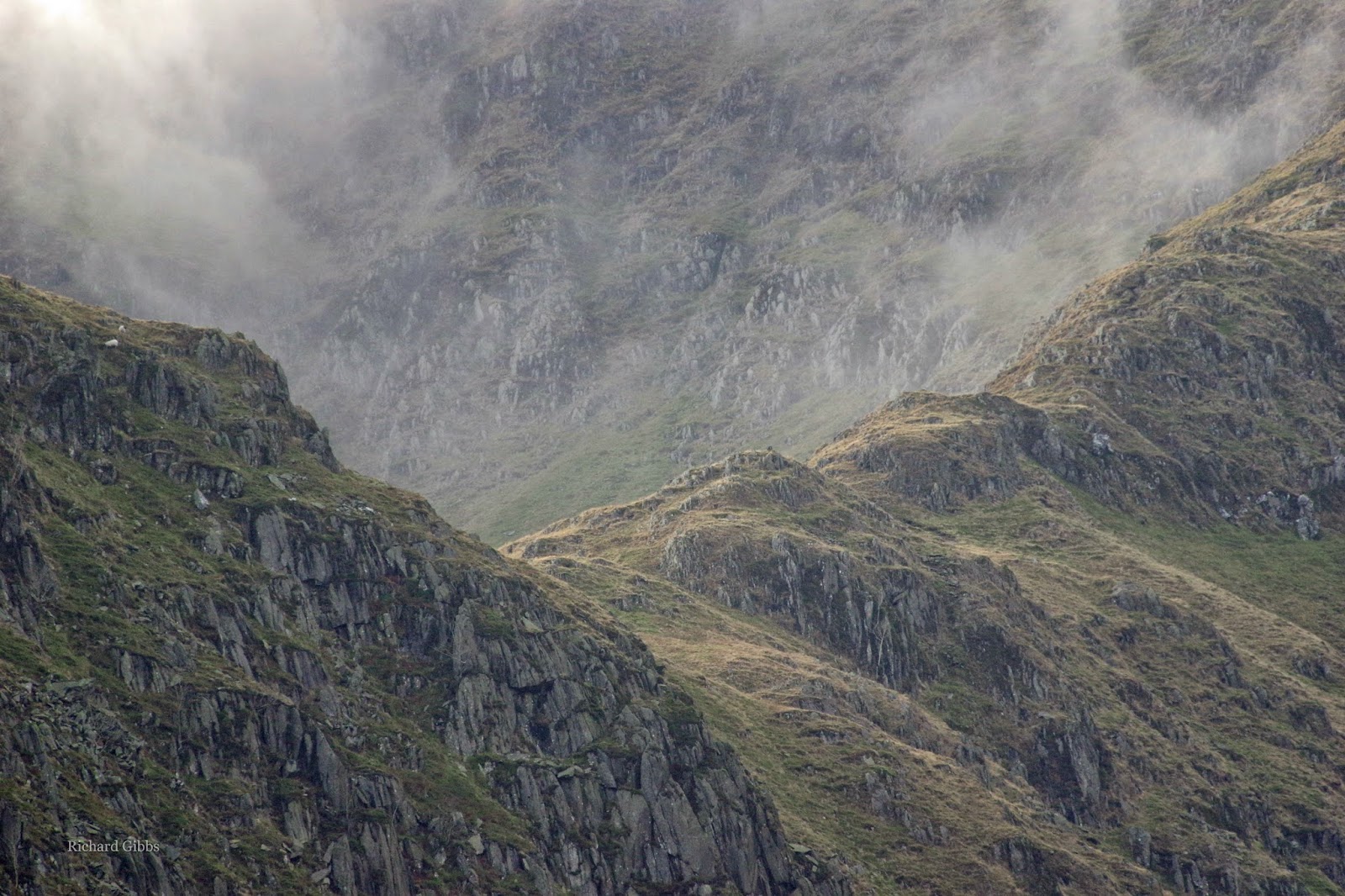 It is rugged country, sculpted over 450 million years by ice and water from rocks of the Borrowdale Volcanic Group.  The Romans came here, using High Street, which reaches 2,500 feet above sea level, as a main thoroughfare between forts at Brougham (near Penrith) and Ambleside.

Since then farmsteads grew up around the shore of an earlier Haweswater, which was divided into two smaller lakes by rubble brought down by the Measand Beck.  The communities of Mardale and Measand eventually had a church, the Dun Bull Inn and a school, and roads skirted either side of the valley.

Then, after the First World War, a law was passed giving the Manchester Corporation the right to dam the valley to create a reservoir, and, after compulsory purchase orders and demolition of the existing buildings, construction of the barrage began in 1929.  The dam, completed in 1935, raised the water level by almost thirty metres and the reservoir, which, when full, is now over four miles long and half a mile wide, provides about a quarter of the needs of north-western England, supplying fresh water to some two million people.

The catchment area for the reservoir now belongs to United Utilities PLC, which holds the freehold of sixteen agricultural tenancies that still exist in the vicinity, including Swindale and Naddle (Neat-dale) farms, currently leased to the RSPB. A further portion of these fells is common land, and the total area owned by United Utilities is approximately 10,000 hectares, which amounts to 4% of the Lake District National Park. 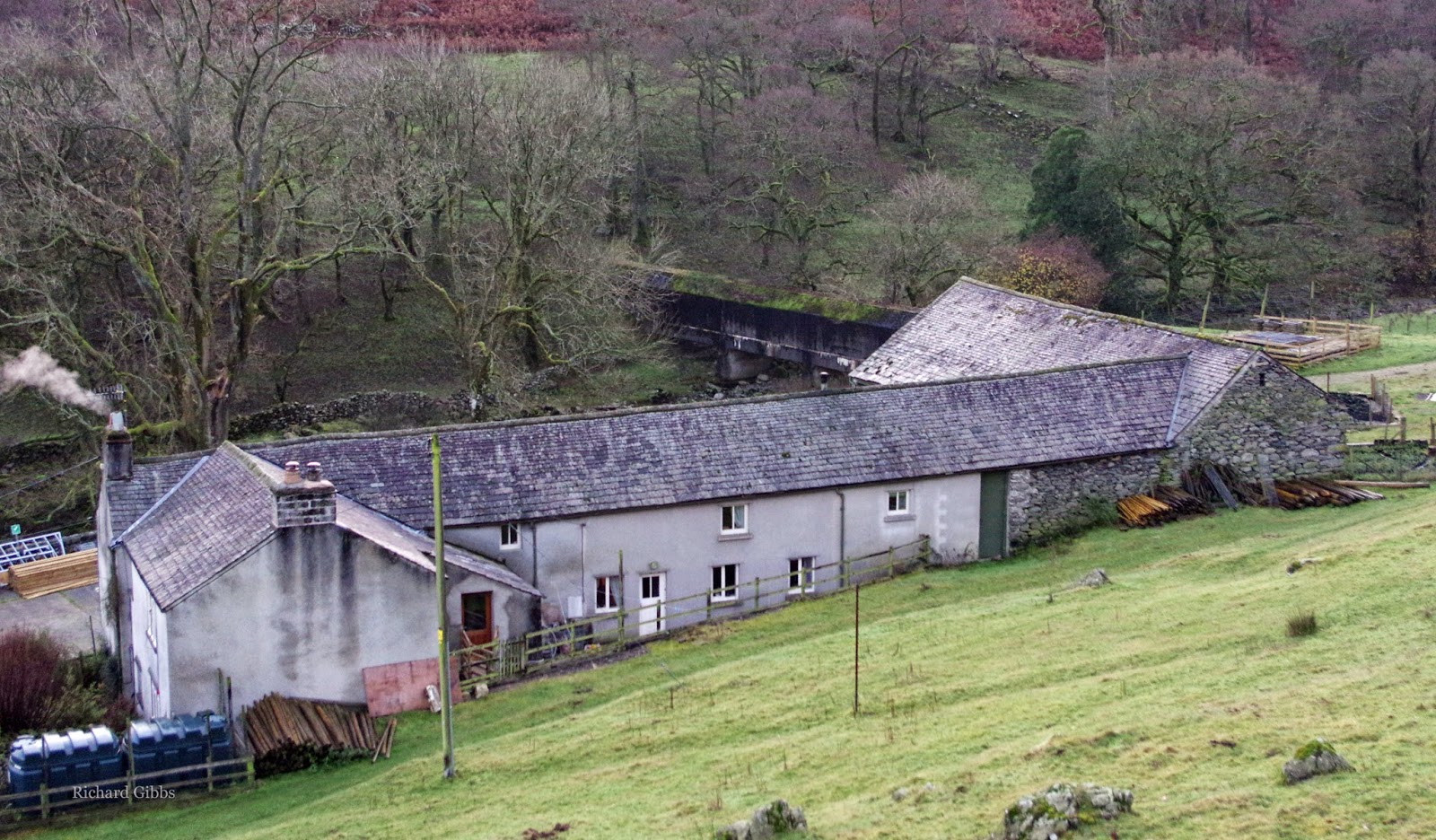 In 1996, the RSPB was here to protect the eyrie during the nesting period and to engage with people who showed an interest. Now, working in partnership with United Utilities, and with the local communities, the RSPB aims to enhance biodiversity (the variety and variability of life on earth) and to improve raw water quality through the restoration of degraded upland habitats. 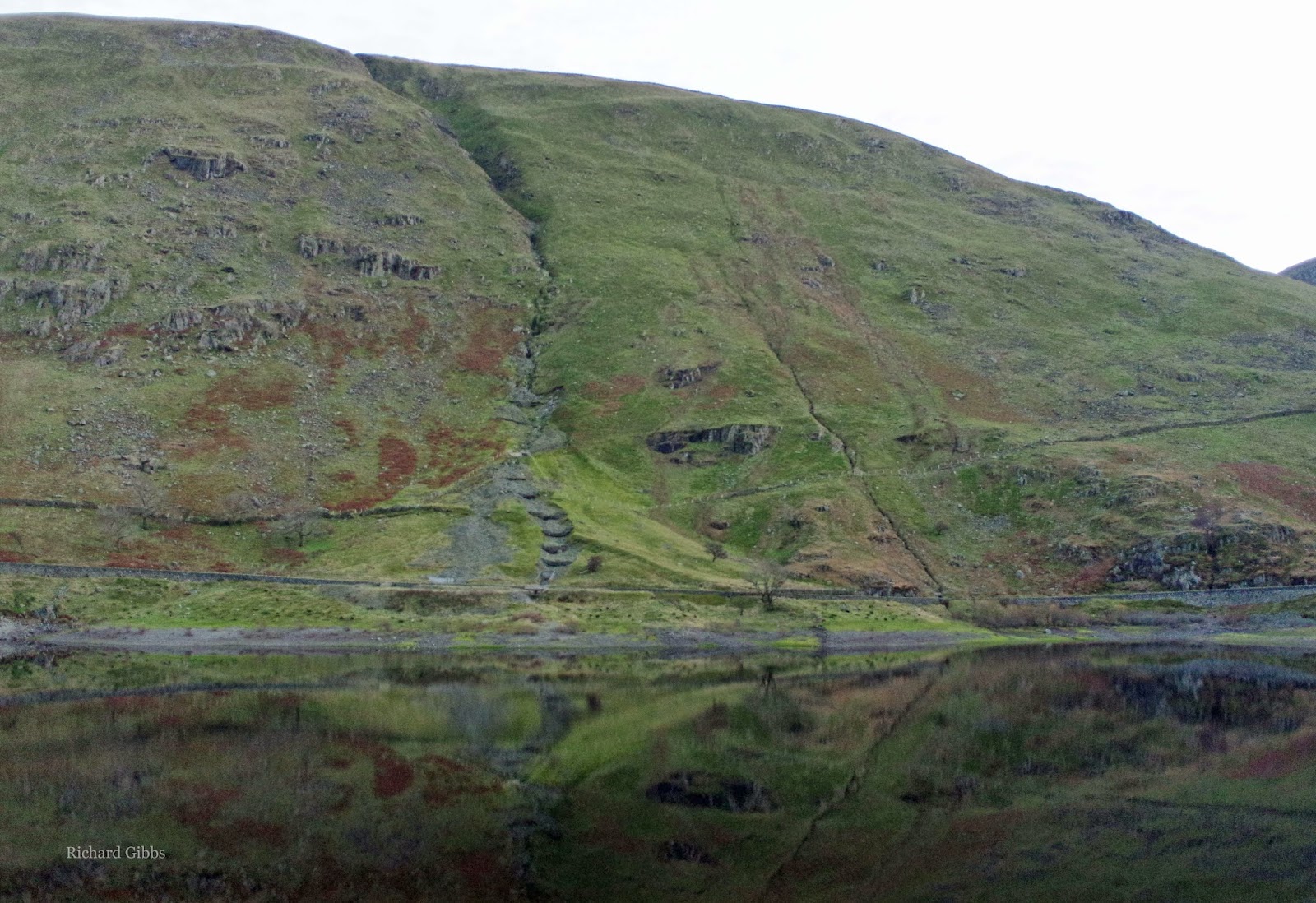 The principle issue here is that in the last two hundred years the main land use has been sheep grazing.  Generations of local people have known relatively little else and so they have built up a reserve of associated skills and correspondingly inherited a conservative resistance to innovation or change. However, the situation is not straightforward: sheep farming is notoriously uneconomical and it is shored up by the Common Agricultural Policy, whose subsidies alone enable hill farmers to continue, although there is no guarantee that the next generation will carry on the tradition nor any security that the CAP will continue (what if the UK were to leave the EU?)

With this in mind, the RSPB has a vision for British uplands, which involves a reduced emphasis on intensive agriculture and an increased focus on delivering a range of public services, which will include improved water quality, richer wildlife habitats, preventing flooding and tackling climate change. 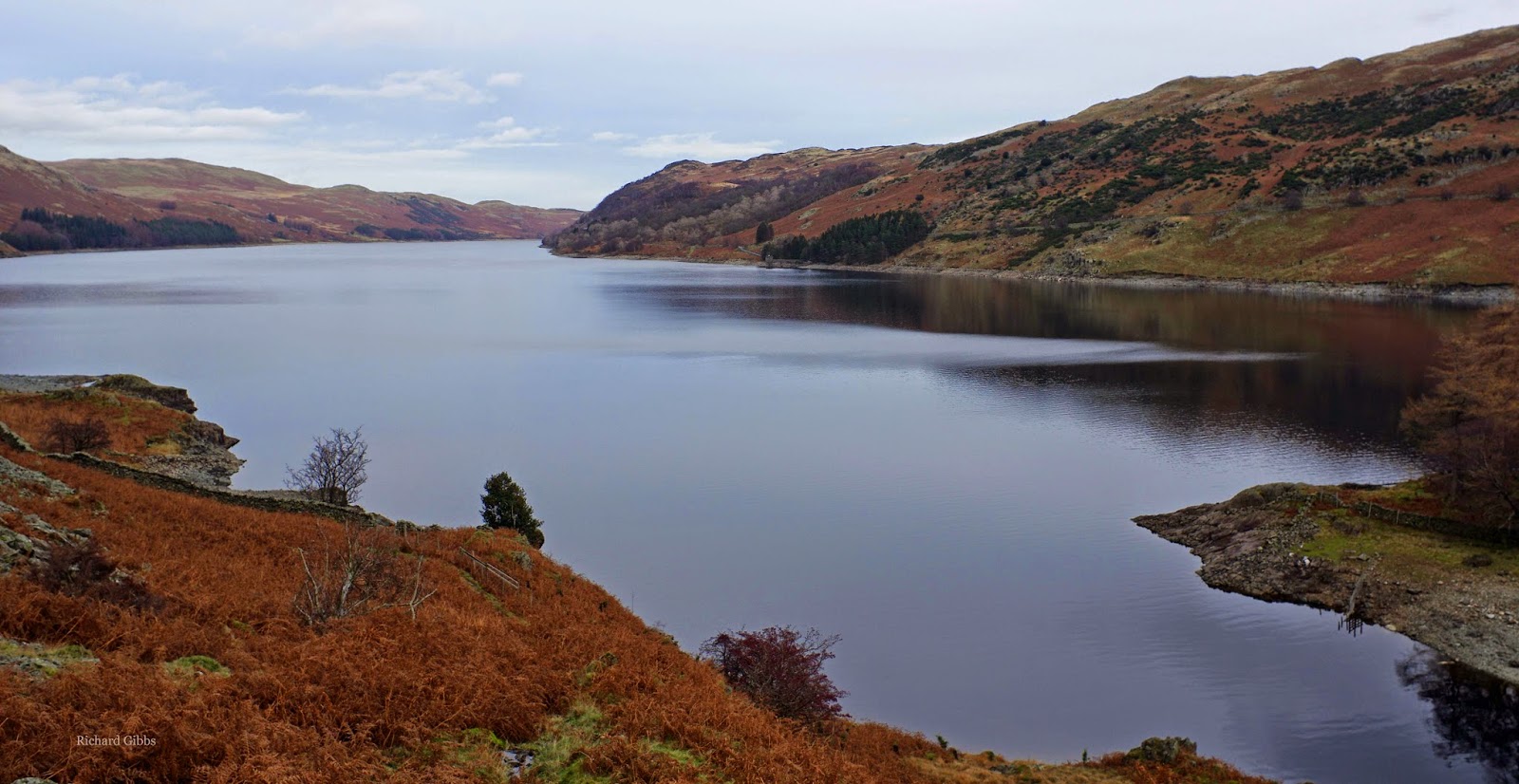 So the current mission of the RSPB at Haweswater is to develop a good practice model of sustainable upland management, and therefore it is working to partially reforest the area with native broadleaf woodland; to refine livestock management practice and to realise the landscape's eco-tourism potential. Overall, despite scepticism on the part of the Federation of Cumbrian Commoners and others, the RSPB fervently wishes to strengthen the resilience of the local economy through job creation and improvements in commerce.

What the RSPB would like to see here is one of the richest sites for biodiversity in the Lake District, with a secure environment for populations of ring ouzels, pied flycatchers, redstarts, red squirrels, mountain ringlet butterflies and whinchats, as well, perhaps, as golden eagles..... 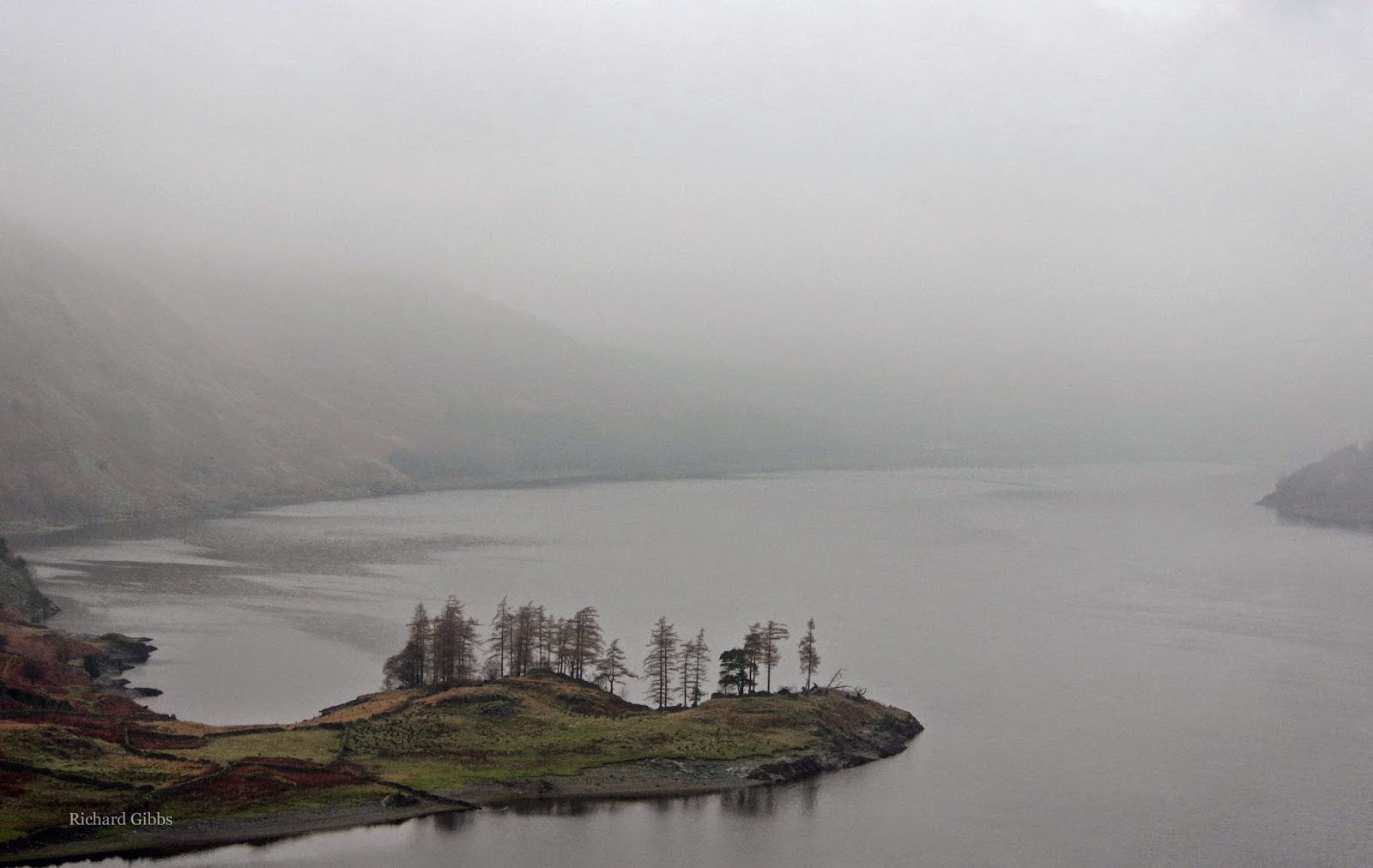 Ideally the uplands will support a variety of habitats and plant communities, and watercourses will pursue natural and dynamic behaviours. Without damage to the environment tens of thousands of visitors will be able to enjoy the wild landscapes every year, and people will be able to understand the true value of the land.

The work here is varied, and, as a residential volunteer I am involved in the daily life of this complex undertaking. Fencing, or defencing, plays a large part in the activity at this time of year, so among other things we carry posts and rails up steep slopes to fabricate exclosures which will provide evidence as to the effects of grazing by sheep and deer. Juniper (juniperus communis), which is one of three native species of conifer in Britain, is being reintroduced in Cumbria, but hitherto its ability to recolonise where it used to thrive has been inhibited by traditional management of the uplands. 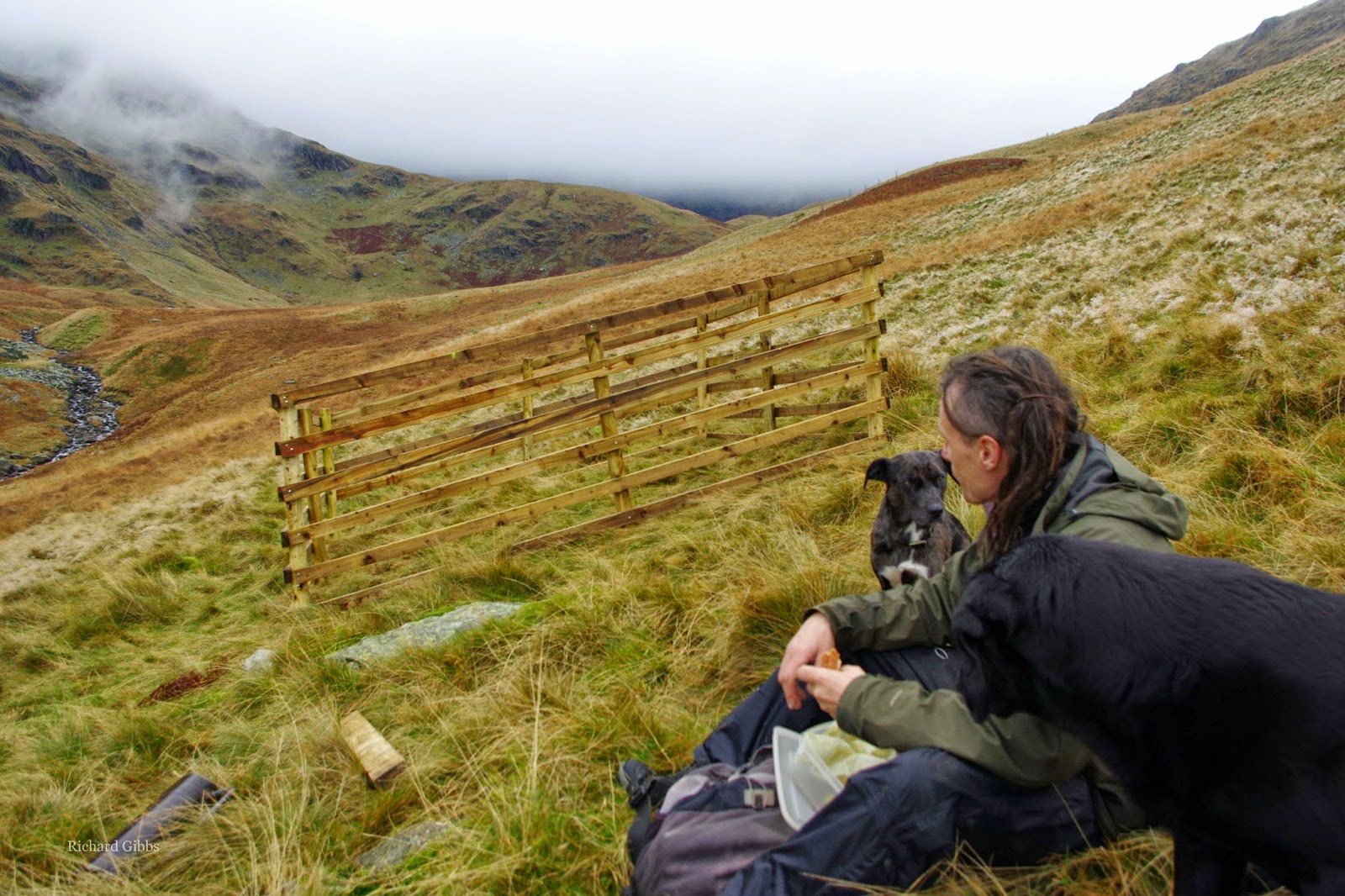 RSPB Haweswater is a vital nature conservation area within the Lake District National Park, and it contains three Sites of Special Scientific Interest, of which two are Special Areas of Conservation. One of these is Naddle Forest, which covers 70 hectares of broad-leaved, semi natural ancient woodland. Benefitting from very low levels of sulphur-dioxide in the atmosphere, this has stands of sessile oak and downy birch, together with rowan and ash trees, which protect exceptionally rich fern, bryophyte (mosses and liverworts) and lichen flora.  The woods also provide breeding territory for four trans-saharan migrant passerines - redstarts, tree pipits, pied flycatchers and wood warblers. 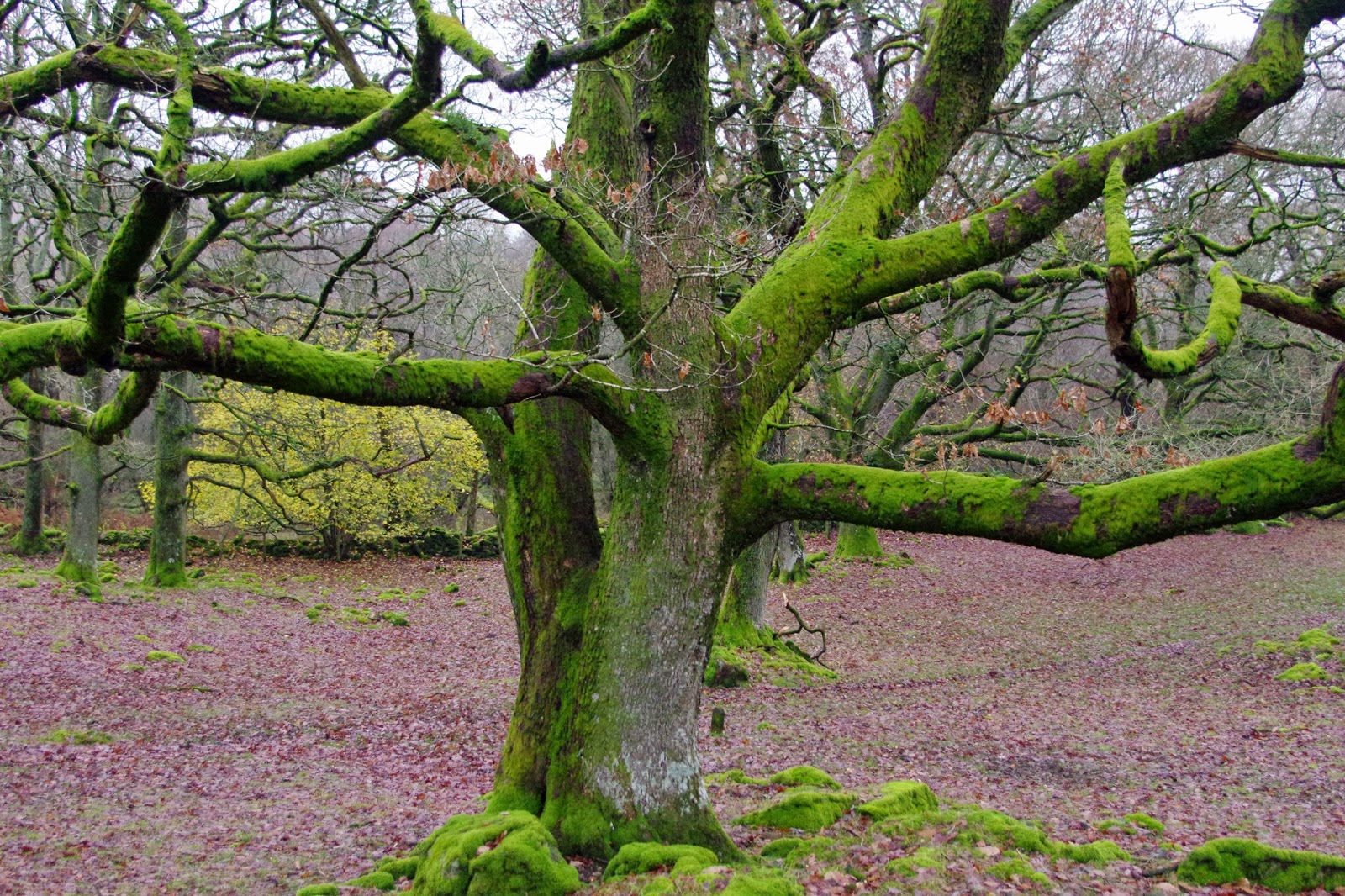 In the meantime, while not encountering eagles, we count seagulls.  The waters of the lake, deep and silent, with their prehistoric population of schelly (coregonus stigmaticus) seem to be a welcome haven for common gulls after their days of worm picking on the fields of the Eden Valley.  With a margin of error and a sprinkling of black-headed gulls tagging along for company, we (that is, Warden Dave counts) count 18,070 coming in to roost at dusk. 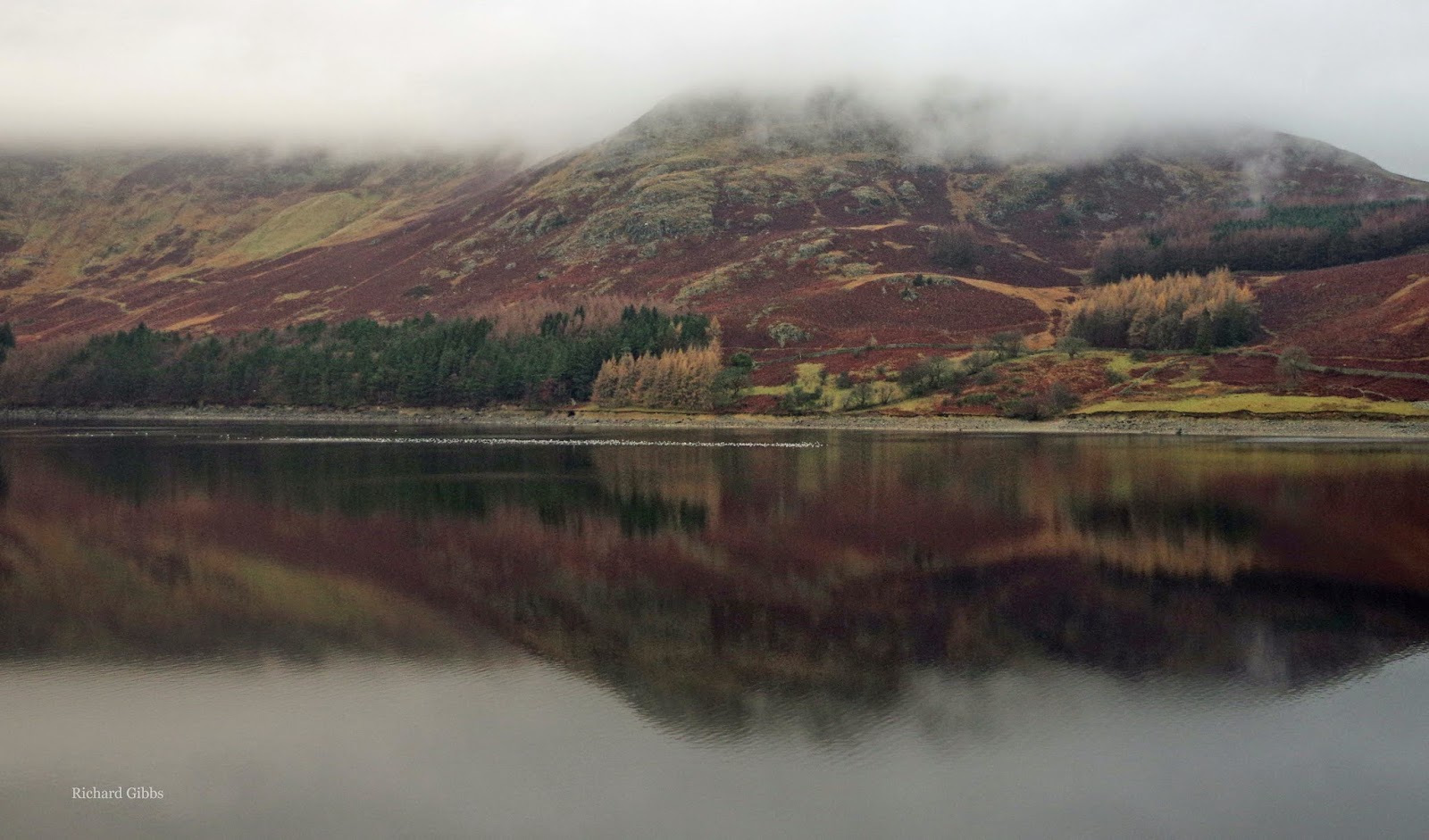 Apparently the roost sometimes reaches thirty thousand. While trying hard to resist the temptation to anthropomorphise, I cannot help but imagine that the eagle, somewhere up on the Riggindale crags, feels lonely while these white van gulls (pace Emily Thornberry) enjoy a regular party....


However, birds do what they do, and my spirit is lifted by the sight of a windhover in the mists. 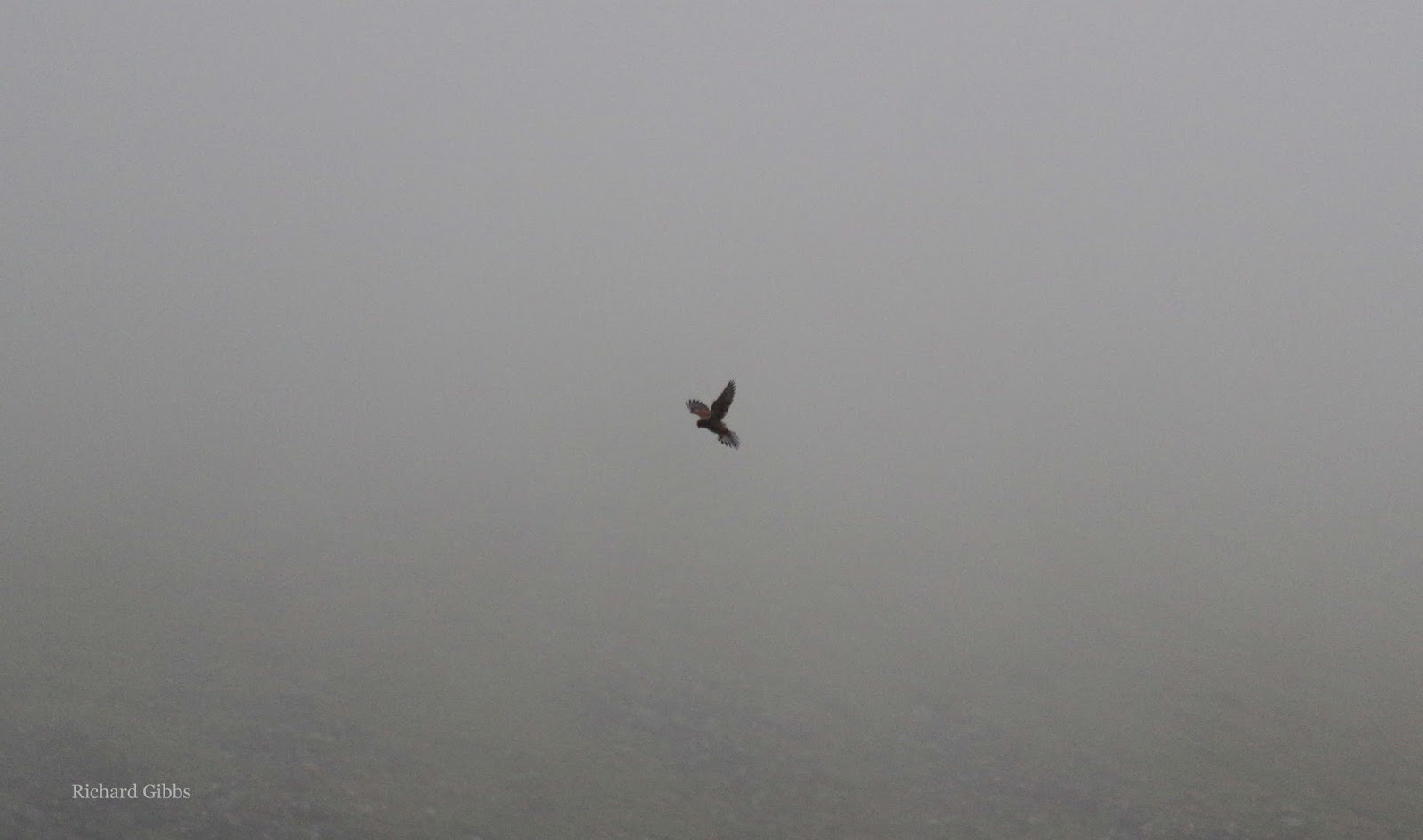 Though I fail to catch them all on camera, I see a dipper on the Mardale beck: 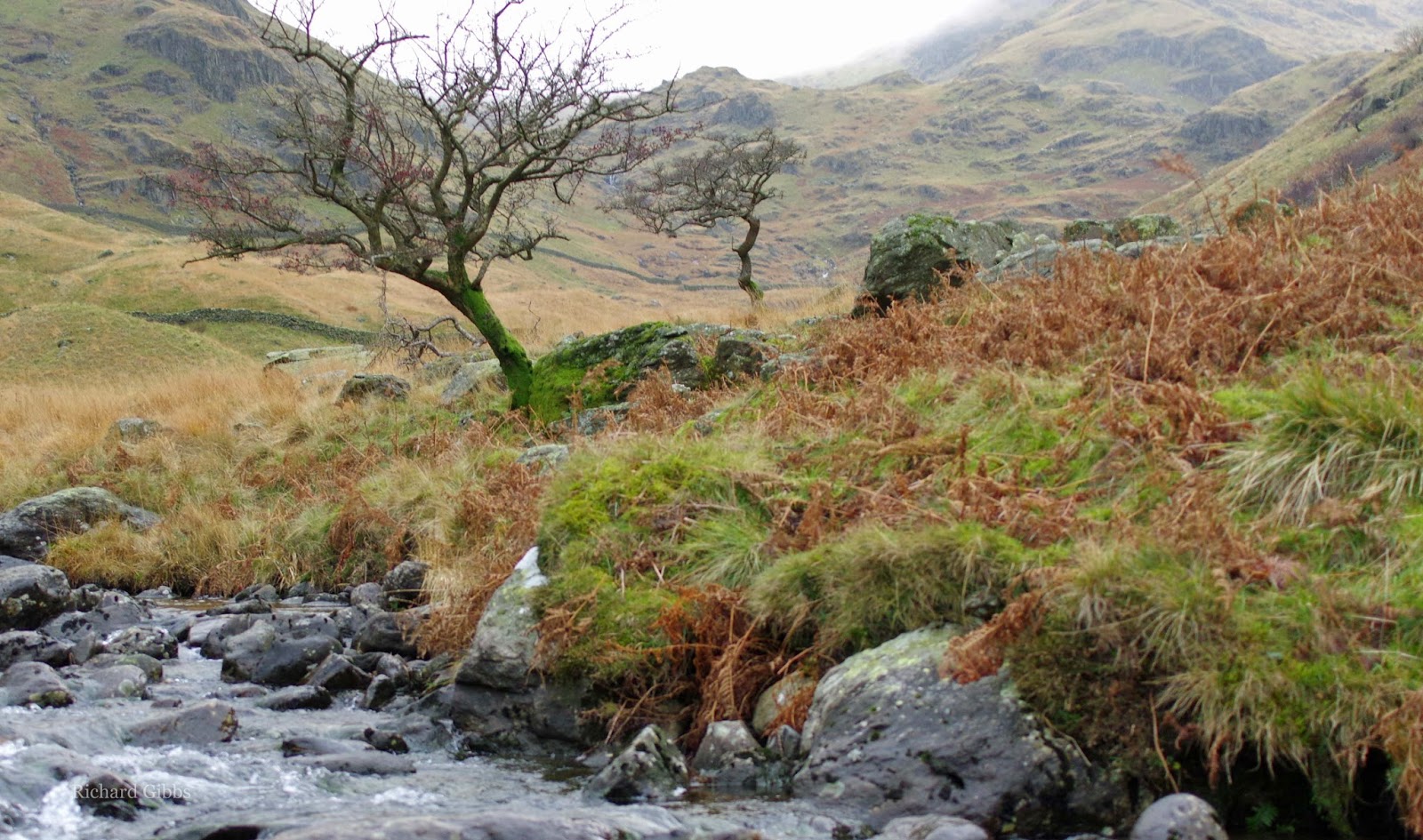 Crows, and ravens, high above the reservoir at dusk: 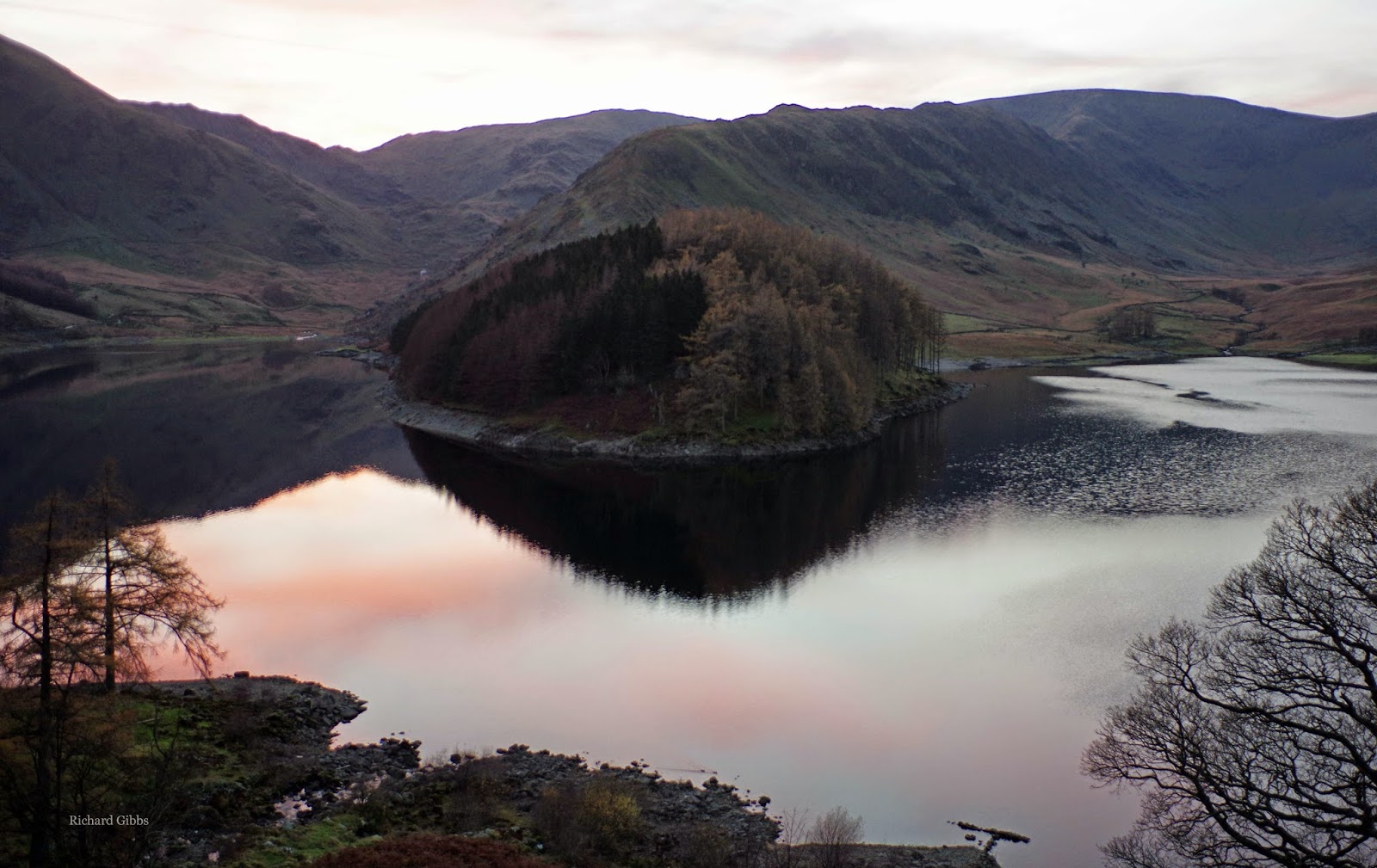 And red squirrels, foxes and  rabbits on the hills and through the woods; tits of all kinds (great, blue, coal and long-tailed), chaffinches, dunnocks, nutchatch, sparrows, blackbirds and goldfinches in and out of the trees and bushes; and cormorants (not welcomed by the schelly supporters), goldeneye, mallard, tufted ducks, gooseanders and canada geese on the water.... 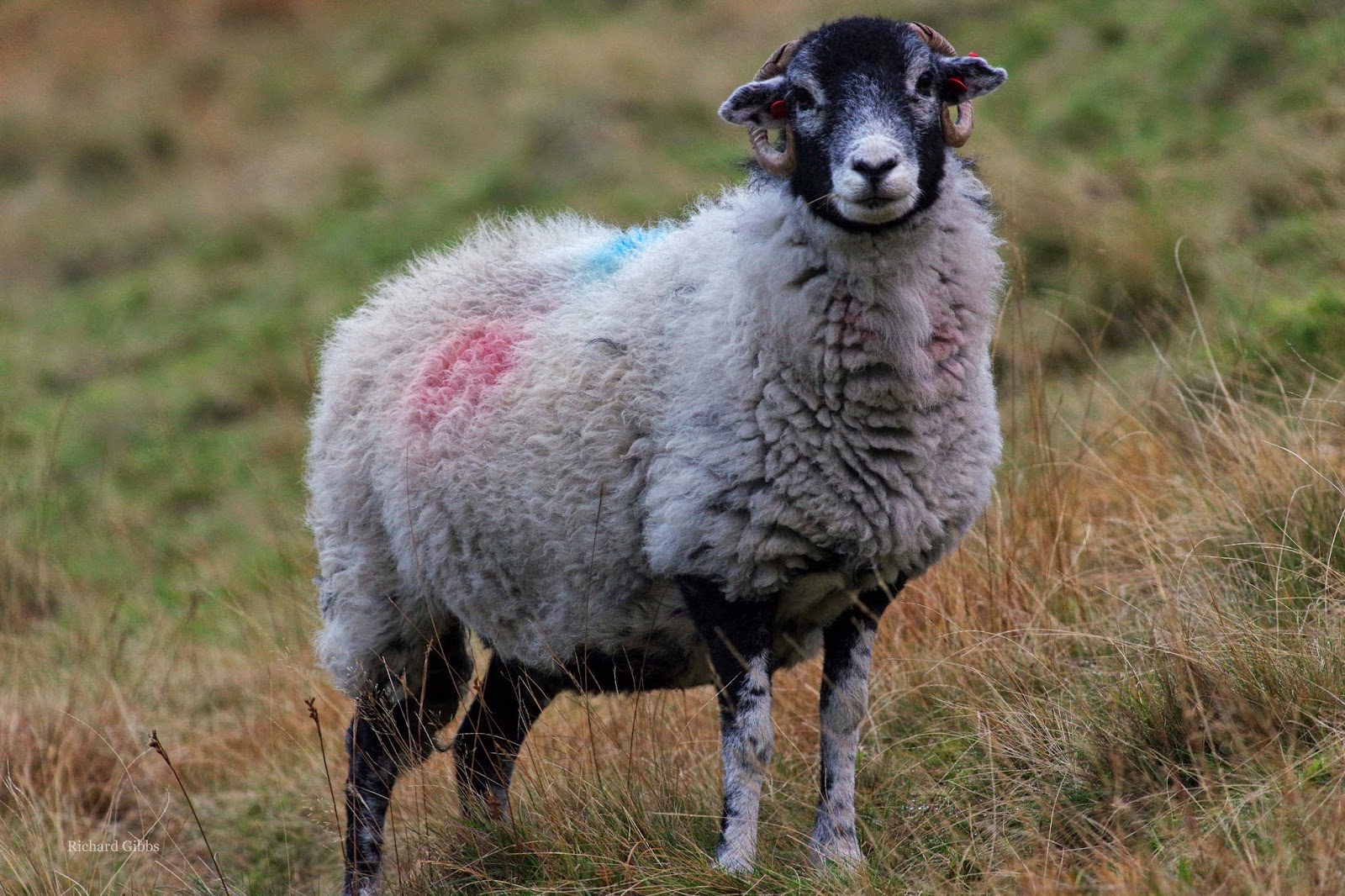 Though I do resist the direction to take the Old Corpse Road (the dead from Mardale were coffined and shipped by horse to Shap), 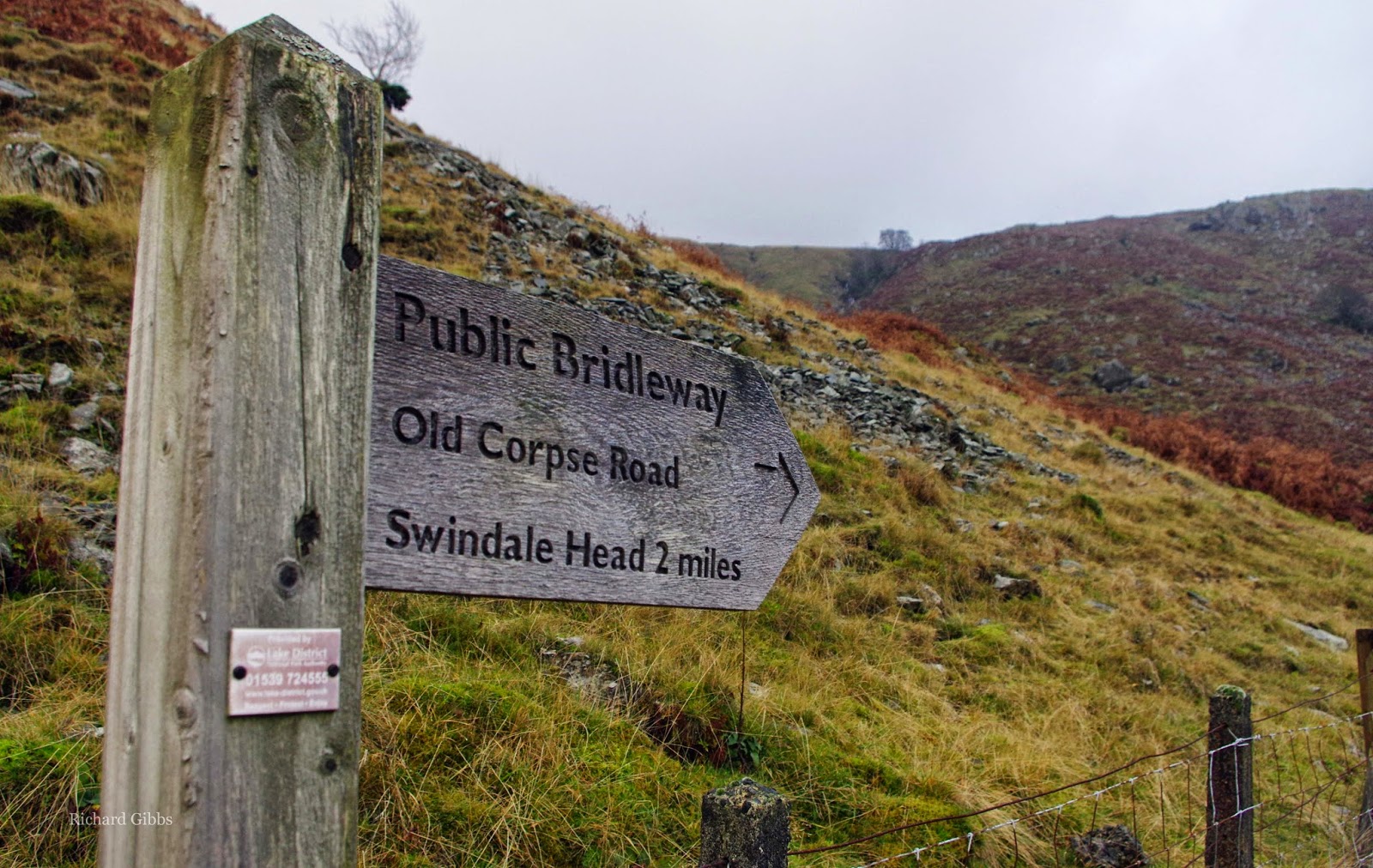 It is impossible to avoid the temptation to reflect on the natural world around you in this beautiful theatre of superficial peace. 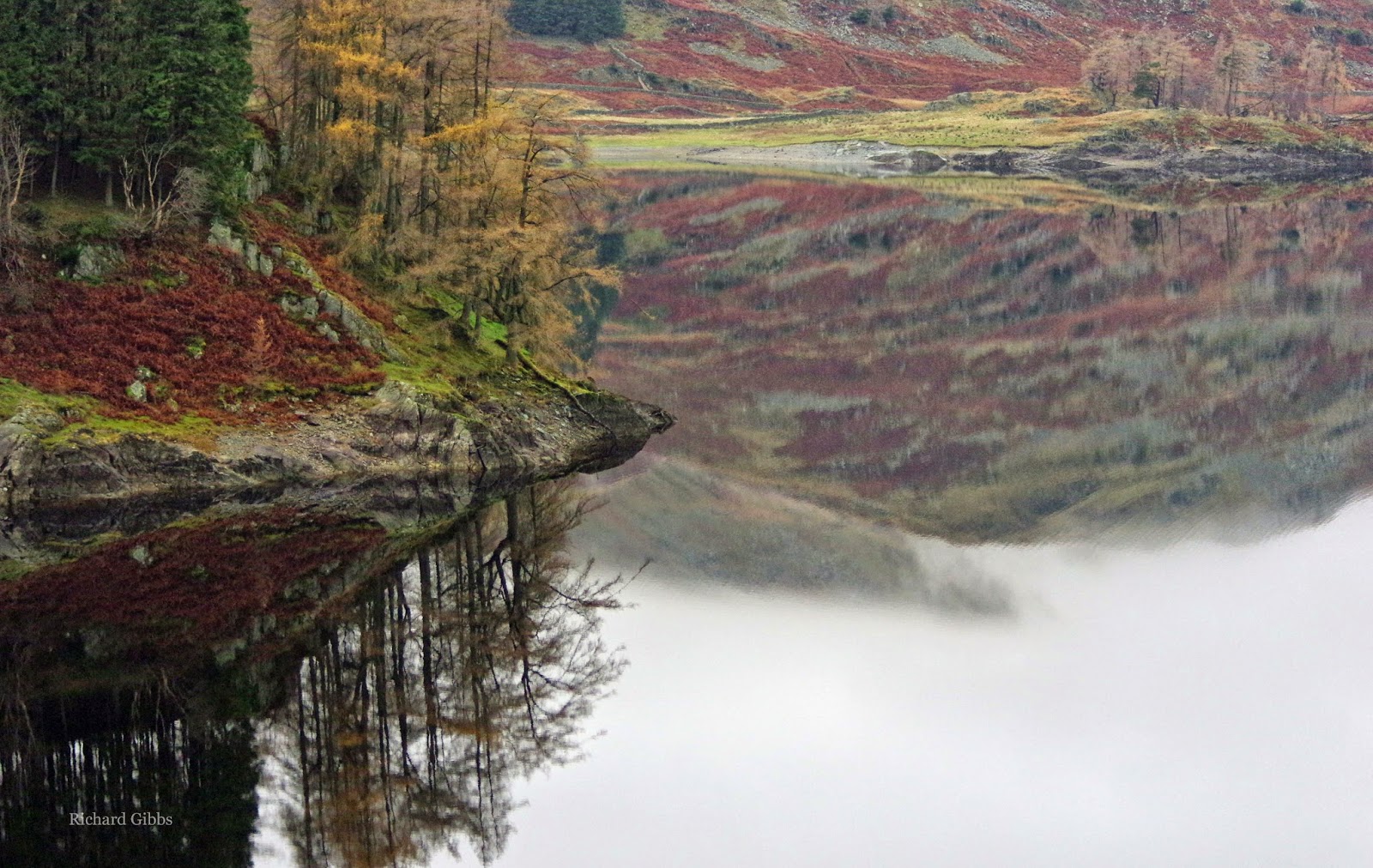 Snubbed by the eagle, I turn my lenses to the water, picking out details of the mirror of nature, teasing me with views that could be blown away at any moment: 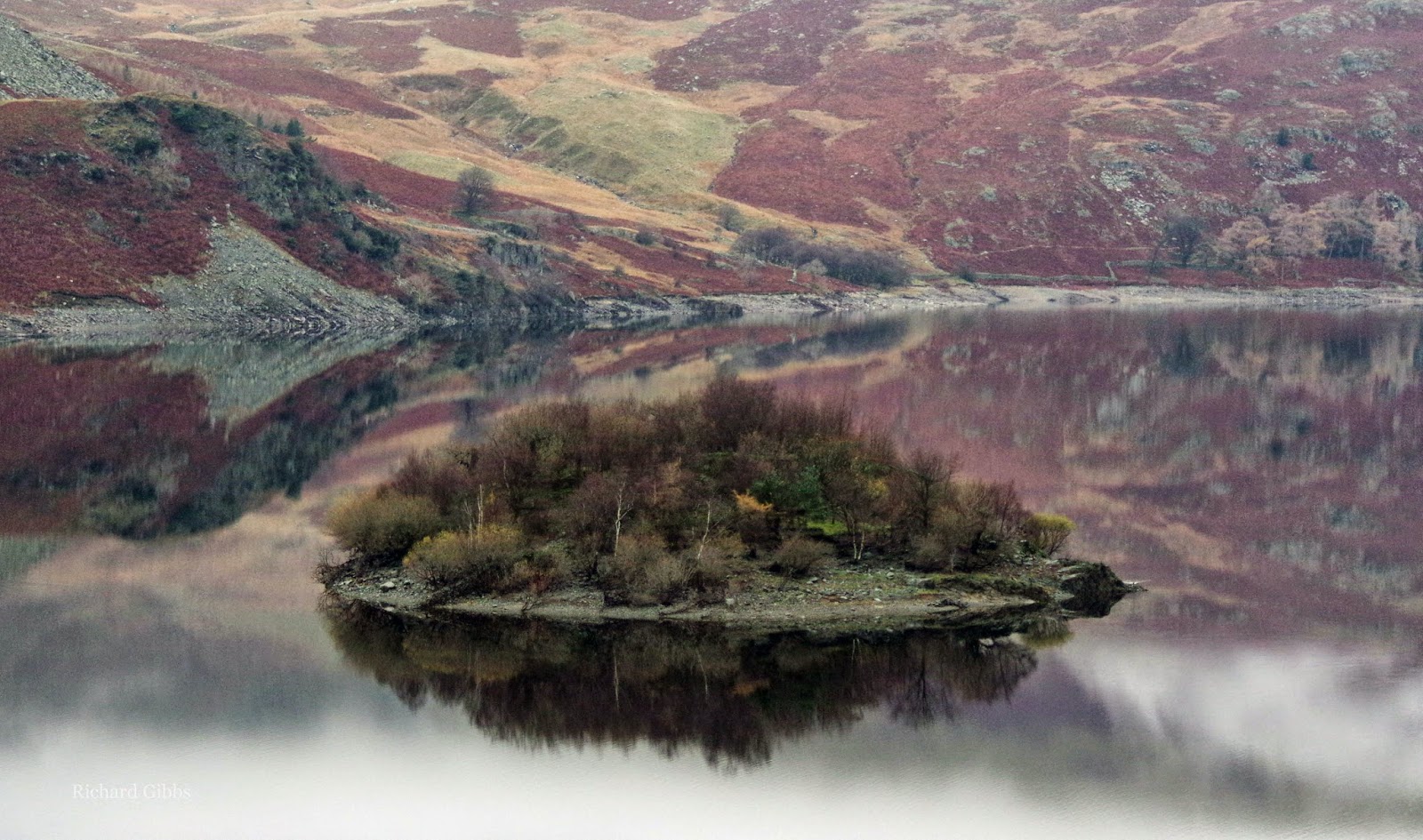 Kaleidoscopes of natural colour, despite Wainwright's disdain for the water's edge..... 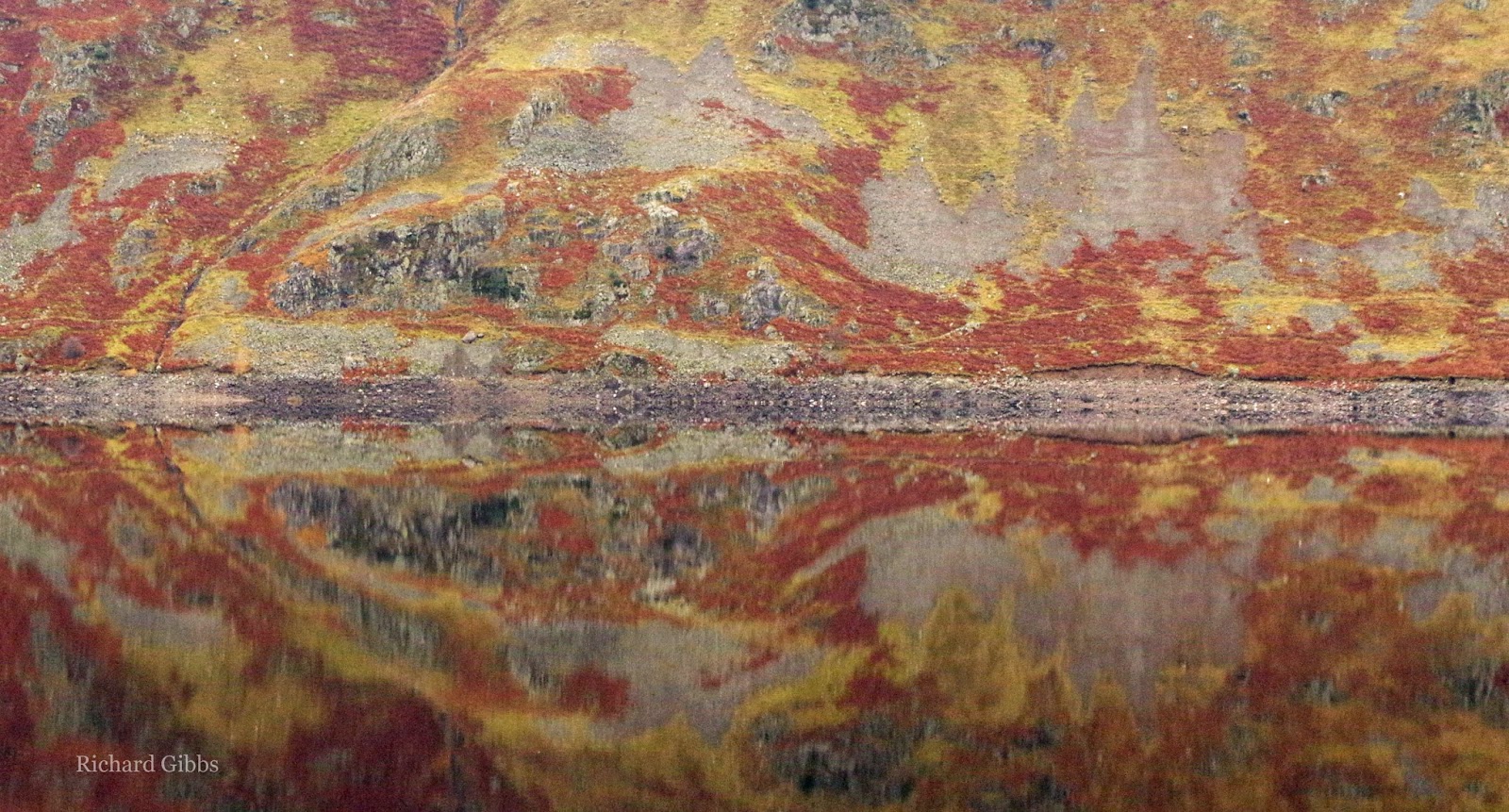 At both ends of the day, plays of water and light, vapour and haze, create spectacles that those, like me, who live in light polluted zones, don't normally get a chance to see.  Hope rises within me that those who work here for the better may one day be rewarded by concord with those who as yet do not comprehend...... 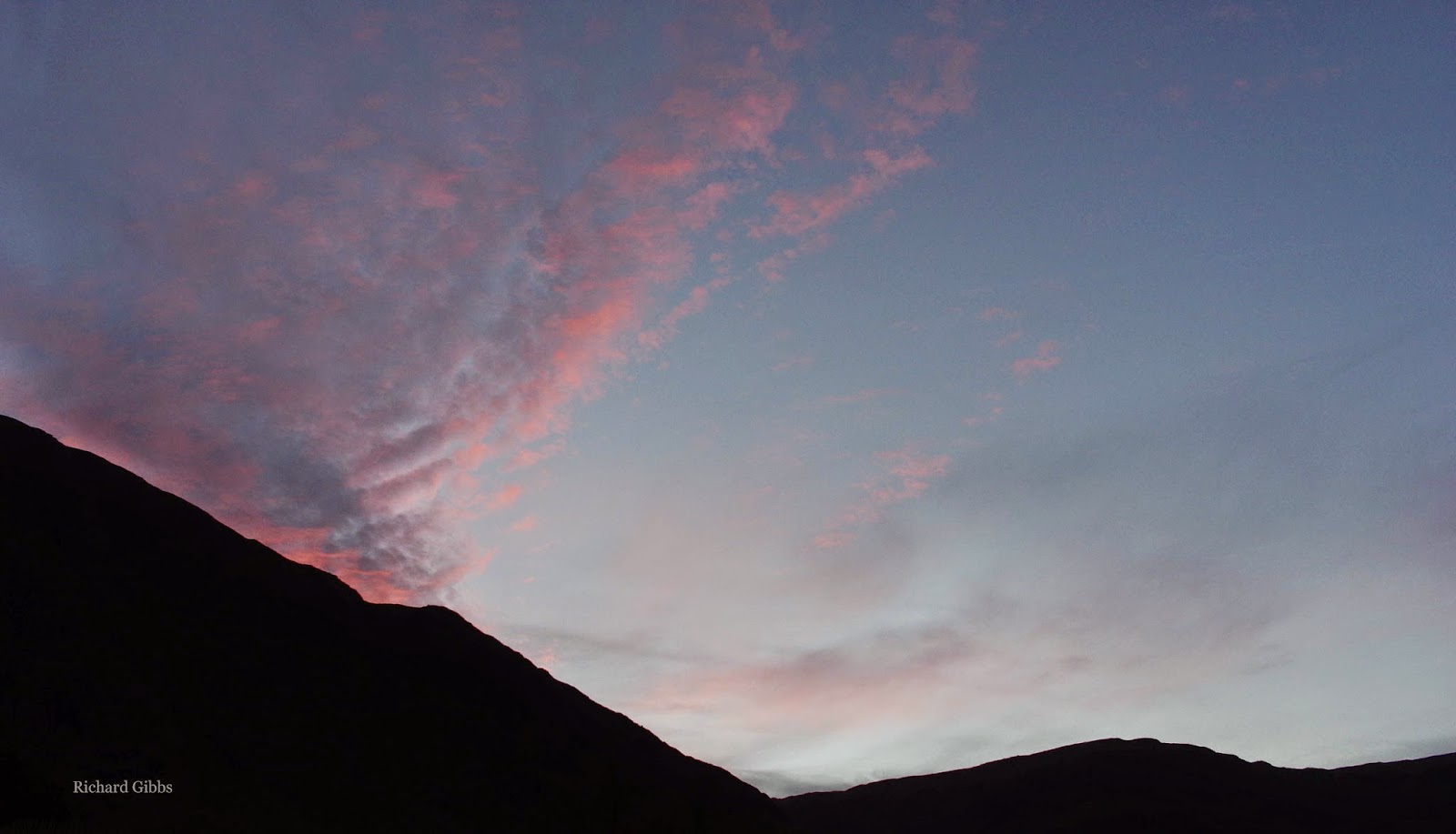 One of my last tasks as a volunteer is to walk the length of the valley along the road, picking up litter. I suppose that over approximately five miles to be able to contain all the human detritus collected in one plastic sack is something to be applauded. But, then again, it is a dead end road; why would anyone take this remote carriageway if not to appreciate the wonders of the scenery and the natural world? 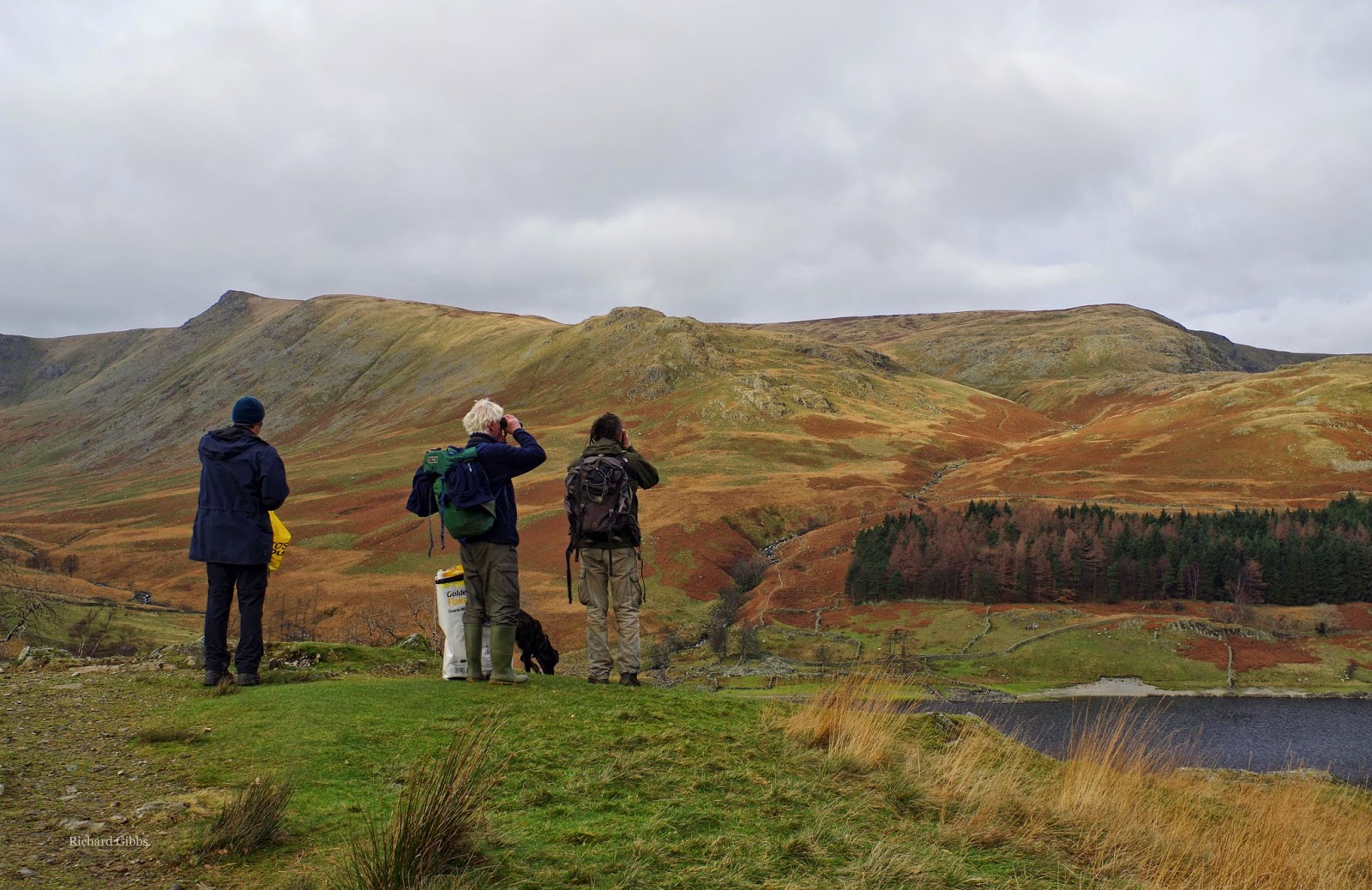 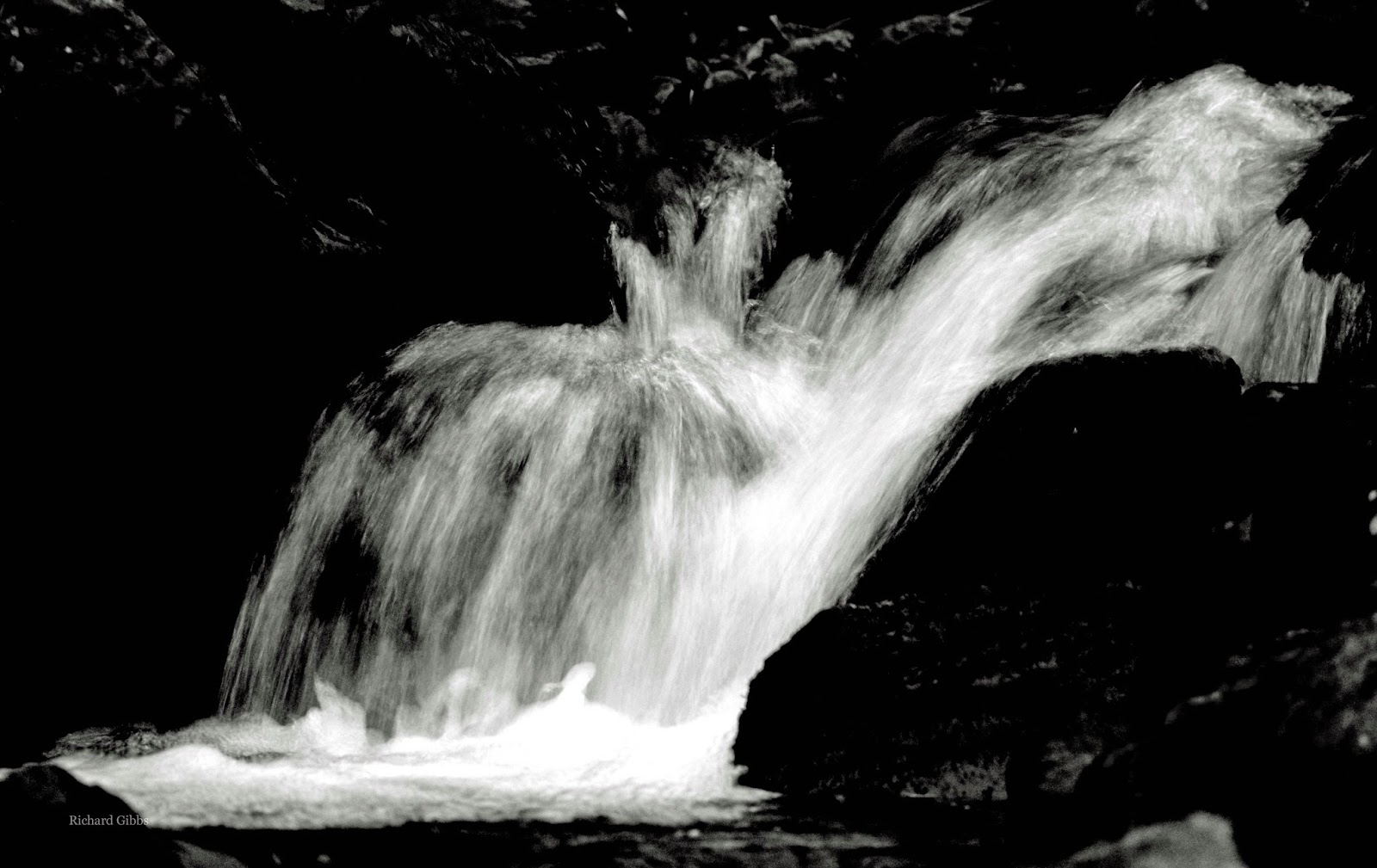 I note that in a paper for her University written by volunteer Angela Raven (Creedy) in 2009, Nature Conservation on Haweswater Reserve, one of the main management objectives of the RSPB listed is to control invasive and dominant species.....

Somewhere on the crags there is an eagle.  Perhaps he is watching me.  Perhaps not.

If he is, then quite possibly he is thinking to himself, what kind of invasive and dominant species is that? 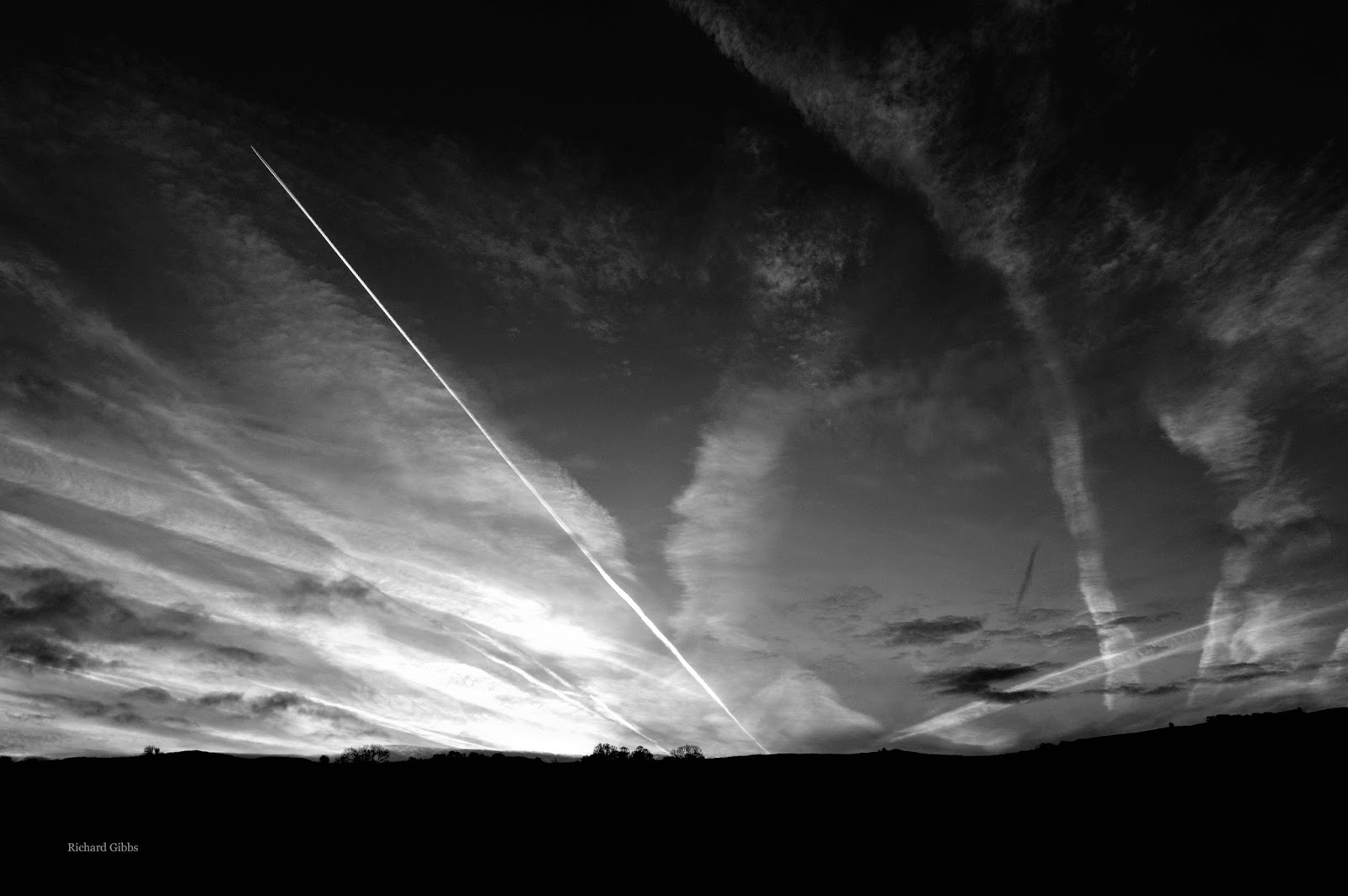 I am in Riggindale.  The dark is gathering and wraithes of misty cloud wreathe the crags.  Somewhere an eagle may be watching me…..


The sound of Haweswater - The Mardale Beck