Forgive me if I write quietly, but it is three a.m. and I am in the forward hide at the Osprey  Centre at Loch Garten and I dare not disturb the Ospreys.  It is a still, starry night, and the temperature is minus one degree Celsius.  I am watching two Ospreys: EJ, a seventeen year old female, who is currently sitting on her nest keeping her three eggs warm, and Odin, a male of indeterminate age (he is not ringed), who is perched looking like a cross between a King Penguin and a Griffon Vulture, on a dead branch not far from the nest.  I am able to see them clearly using infra-red light and cameras mounted near and on the nest tree.

My partner here (currently sleeping in the back room) is Dr L.... E...., retired Professor of Applied Hideology at the , who has perfected (in secret) a way of communicating with Ospreys using Encephalophony, a technique of conversing between different minds without the use of conventional language.  The signals transmitted and received are translated using a system which he describes as Helen Keller meets Enigma.  I bow to his inevitable superiority.

The wonderful thing here is that Dr E has conducted an interview using his technique with Odin, proud father of three eggs by EJ.  However an additional hurdle that Dr E has had to overcome is that Odin is limited to thinking in Old Norse (we believe he originated in ) and so his "words" have been double filtered.

It is three in the morning.  The sky is speckled with stars, like an old mirror, and there is no moon.  EJ nestles her eggs, her sharp eyes occasionally shut with her lower eyelids as she succumbs to the urge to doze.  Odin shifts his weight and periodically clutches and unclutches his perch, but in the dark he will not fly.  Nothing stirs.

Dr E asked me not to tell anyone, but I cannot resist.  This stillness, this lonely vigil through the night, my voluntary presence here to deter (and, if necessary, tackle) egg-collectors, who still, however much it stretches the imagination, desire to rob this marvellous nest.....  this position of enormous responsibility drives me to share with someone all that I have learned in the past few exciting days.

Before I arrived at Loch Garten, my knowledge of Ospreys was discreet, to say the most.  I have long harboured the belief that I once saw a number of them in , seeming to be temporarily lodging in trees by the of Bracciano, some fifty kilometres north of .  I watched them spellbound for some time, seeing them diving in the lake and generally behaving as you might expect large fish-eating raptors to behave.  I was on my own at the time, with a Ducati 350 for company rather than binoculars or cameras, and I was pressed for time, so, in due course I had to leave, and leave behind this vision, or dream, never to recapture it.

That was nearly 40 years ago, a time when few Ospreys nested in the , and, although I subsequently lived by that lake for fifteen years, I never saw them again, nor have I seen Ospreys anywhere else, especially not in my back garden nor in the fields around my home just north of .  However, the Osprey, as a distinct species, is approximately a million years old, and I suppose that Odin may count as a reasonable representative...... 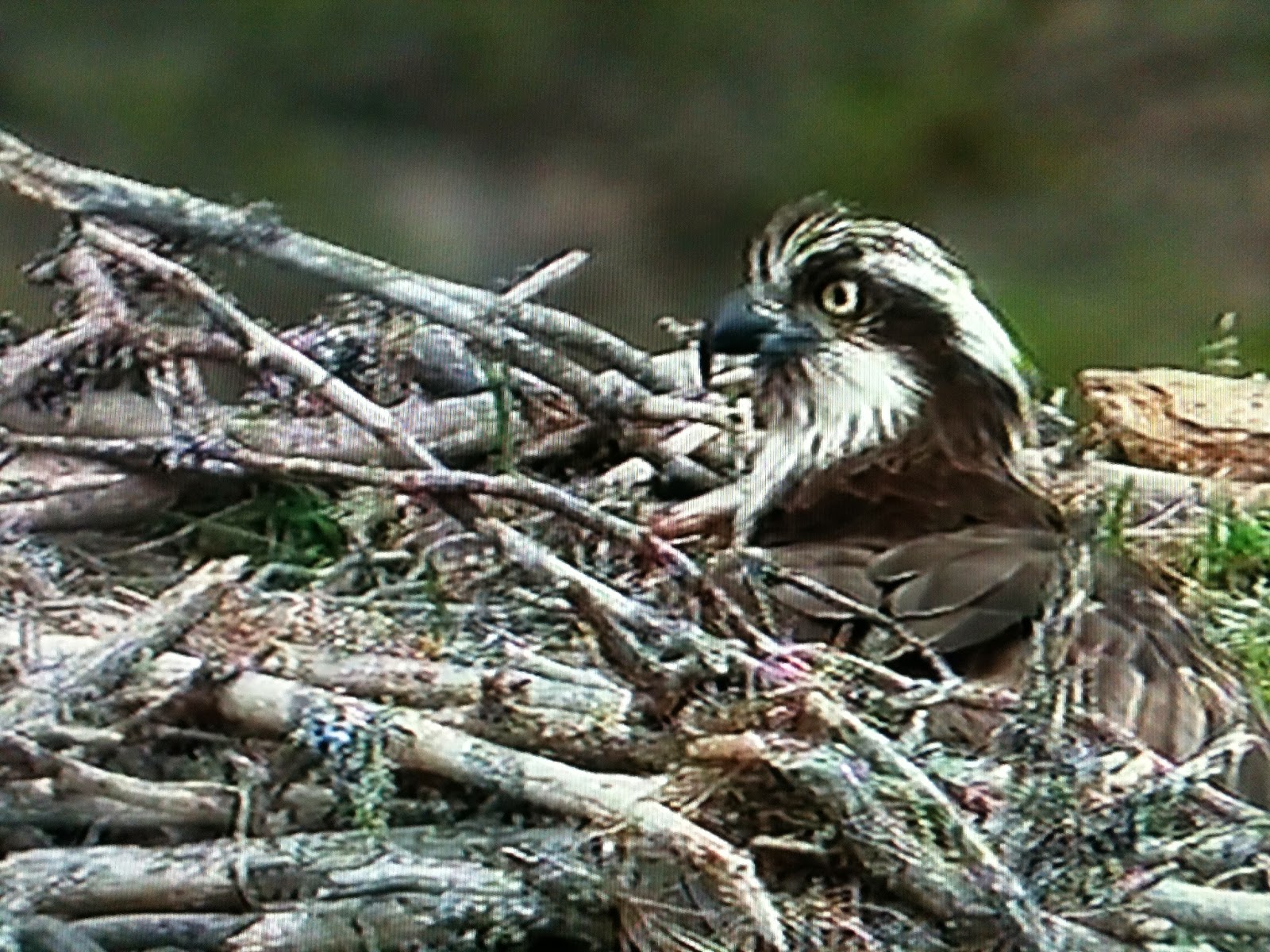 Odin's demeanour in the interview was, apparently, quite relaxed, but tended towards the taciturn.  Dr E took the opportunity of quizzing him whilst he was on the nest, having just provided an eighteen inch headless brown trout for his partner, who had flown off to dine on a nearby branch.  I won't quote the whole dialogue, particularly as the word fish recurs somewhat too often, but Dr E first asked Odin how he had met EJ.  His answer, Flying, told us much about his lifestyle.

Subsequent questions about their relationship did not reveal particular warmth, at least not in an anthropomorphic sense, but he did give us some insight when replying Eggs to the question, what do you see in EJ?  He was asked what he thought of the nest, and said it was Robust, but when asked if he would like to see any improvements, he offered that he thought it could be nearer a source of fish and that it could be more private (apparently he sometimes has the sensation that his every move is being observed.)  As to how he came to be in the Loch Garten area in the first place, he panted, thermoregulating, and said he was just there.  Seemed nice, he said, just passing.  But why fly several thousands of miles from to this particular place?  Again Odin ruffled his shoulders and said Everybody's got to be somewhere.  Longer days here.  He panted again, his tongue lolling.  Short nights.  Fish.  Then why fly several thousands of miles to in the Autumn?  Cold in .  Dark.  Nice there.  Fish. 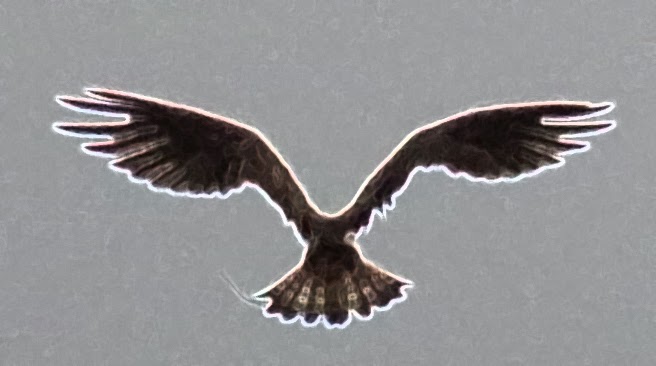 Odin had little to say about his eggs.  When asked which he preferred, he shrugged, and volunteered that he just liked sitting on them sometimes.  When asked why he brought EJ fish, he suggested that she needed them and would not leave the eggs.  When asked why he ate the heads of fish first, I understand he just stared, slightly severely, at his interviewer, as if to say, that's a daft question, how else would you eat a fish?  Dr E felt that there were strong senses operating within Odin that he could not articulate, and so attempted to delve into his character.  What did he like doing most?  Fishing.  What was his favourite food?  Fish.  One thing he would like to see?  More fish.  What would he like to pass on to his eggs?  How to fish.  What did he fear?  No fish.  But when asked to express some detail on how he would like to bring up his eggs, he used the word (or rather Dr E could find no alternative expression for this) Proportionality.  Dr E pressed him.  Fish too small - not worth the effort.  Fish too big - extremely bloody difficult to take off again.  Must be proportional.

In an attempt to broaden the discussion, Dr E asked if Odin had any fond memories, but the answer was Fish.  But when asked what his favourite moment had been, he cited a recent thermal, which had given him effortless lift, so he could smoothly glide to the fishing .  Sound he liked?  Still water.  Sound he didn't like?  EJ's alarm call.  Any advice for other Ospreys?  Avoid . 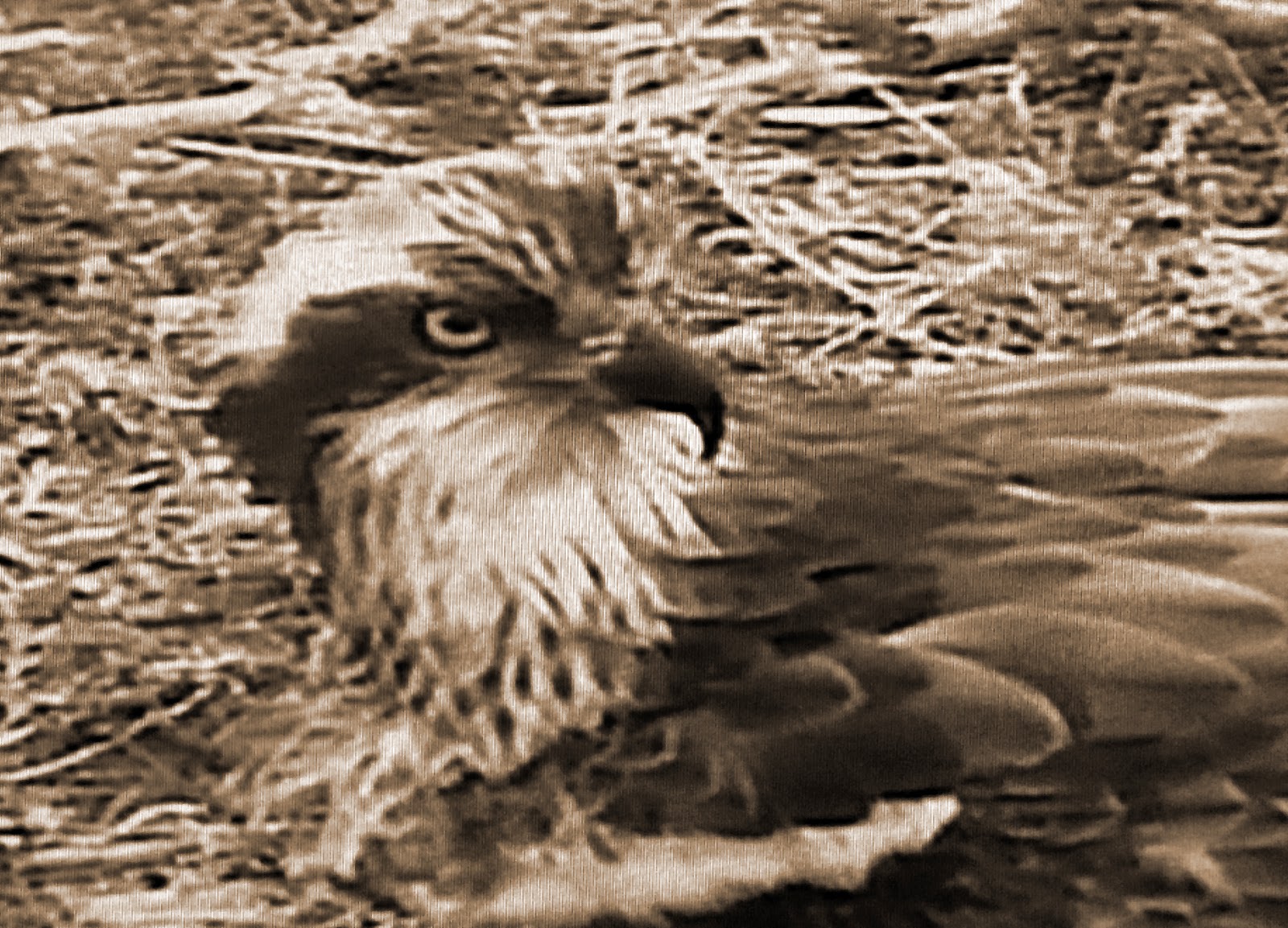 The conversation didn't go much further, as when Dr E was about to ask where Odin saw himself in five years time, EJ returned with the tail of his fish for him to eat, and, grabbing it in his left talon, he spread his wings, dropped off the nest and disappeared.

As I whispered some time back, this technique is very hush hush and Dr E did ask me not to say a word, so I trust you will keep it to yourself?  But it is interesting, don't you think?  I mean, I am watching Odin now, nodding on his branch, and I could imagine he is dreaming of , and the warm sun and big fish he no doubt enjoys there, but his mind is not like that.  He is clearly on a kind of automatic pilot much of the time.  What he does is what he does.  It's a bit like Ted Hughes's Hawk Roosting: My manners are tearing off heads.  There is no room for niceties.  I have watched him now for nearly a week, and he and his mate have taken it in turns to keep their three eggs warm and safe, and in between times he has fished and eaten and brought fish to his mate, and preened his feathers to keep himself in good condition so his dives into the water won't chill him, he won't get cold at night and he will be able to fly well.  Essential maintenance.  He has to survive so that his eggs will survive.  The expectation is that one in three might make it to maturity.  He (and his mate) may live up to 25 years (which could be equivalent to 100 human years, so 20 is more likely), and if in that time they produce more than two chicks that make it to maturity then the species breaks even.  More than that however is desirable so that the species does more than just survive. 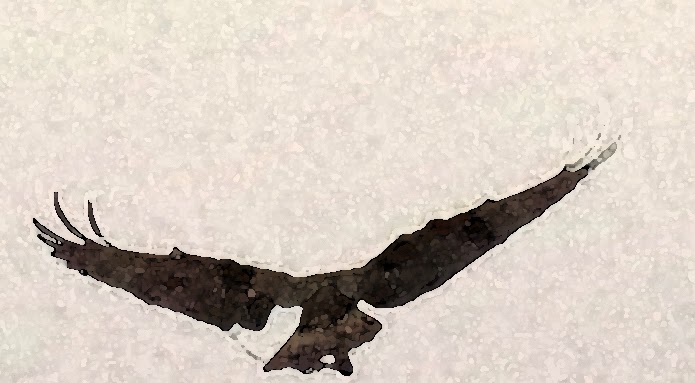 Ospreys have been around about a million years, and mentioned in human literature for over two thousand.  The name (Pandion haliaetus) essentially means fish (or sea) eagle {medieval latin, avis prede - bird of prey; anglo-french, ospriet} and that is what it is and what it does, perfectly adapted with strong talons and a sharp hooked beak.  Why? is the same question for all forms, but from our slightly pedestrian position these magnificent fliers, beautiful killers, are greater than most.  D H Lawrence, in his typically controversial way, posed a question in Mountain Lion, when he encountered two men who had killed one in the in :

And I think in this empty world there was room for me and a mountain lion.


And I think in the world beyond, how easily we might spare a million or two humans
And never miss them.

It is not a question of which is better, but as the sun begins to rise in the East, backlighting the trees behind the nest, and Odin sits silhouetted against an orange sky atop a dead tree, I cannot help but think this is wonderful.  I am so privileged to see these magnificent creatures living, soaring, sitting, sleeping, and to catch their beady eyes once in a while.

I focus the hide's ex-U Boat binoculars on Odin for a moment, the sun creating an aura around his spiky punk-feathered head, and I think I hear him say (in Old Norse of course) This is what it's all about.....Time to go fishing.....

In the room behind me Dr E snuffles, and turns over in his sleep.....