City of the Dead


Perhaps it was because I was reading Ian Rankin's Standing in Another Man's Grave on the train to that I arrived with thoughts about mortality.  Not gloomy ones; just reflections on rituals of burial, and the finity of life.

The feeling doesn't go away as I walk up Calton Hill, past the Old Calton Burial Ground with its austere obelisk of the Political Martyrs' Monument, dedicated to five deportees punished for their role in the fight for electoral reform in 1793.  Then, atop the hill, there's the incomplete National Monument to the dead in the Napoleonic Wars, with columns that somehow resemble more Battersea Power Station than the Parthenon.  Then there is the inverted telescope of the , remembering Trafalgar (what will become of this come independence?) and the iconic Dugald Stewart Monument, designed by William Henry Playfair (who also designed the National Monument).  Acropolis: Necropolis!

A little while later, wandering up the Royal Mile, a sign for the City of the Dead caught my eye, and from then on everyone I met seemed to be dead.

David Hume reposing half dressed by the side of the road called out to me, To hate, to love, to think, to feel, to see; all this is nothing but to perceive.....

Robert Burns, Sir Walter Scott and Robert Louis Stevenson greeted me, lifelessly, in The Writers' Museum, which is in a seventeenth century building known, appropriately (there is no lift), as Lady Stair's House.

As I wandered the rooms I heard Scott, seated at his dining table, rambling on about how he invented the clan tartans,

and organised the visit of George IV to in 1822;

then he invited me to a game of chess.  Robbie Burns, clutching his swordstick, muttered, almost quoting Bob Dylan, My heart’s in the Highlands, my heart is not here;/My heart’s in the Highlands a-chasing the deer..... and Stevenson showed me the ring made from tortoiseshell and silver, inscribed Tusitala (teller of tales), which was given to him by a Samoan chief; he was wearing this ring when he had his fatal cerebral haemorrhage at the age of 44 (in 1894).  Outside, in the flagstones of Makars' Court (which takes its name from the Scots word for a poet or author, and also gives its name to an honorary post for three years for the City's Literary Ambassador) are inscriptions celebrating other Scottish writers, such as the fourteenth century poet, John Barbour, and Sorley MacLean, who died in 1996.

Up the road, the Castle broods, full of weapons of destruction, like Mons Meg, and dead pets.  There are mementoes of glory, to be sure, but the most affecting parts, for me, were the Prisons of War, where in 1781 some 1,000 men were incarcerated, for the most part captured in the American War of Independence. 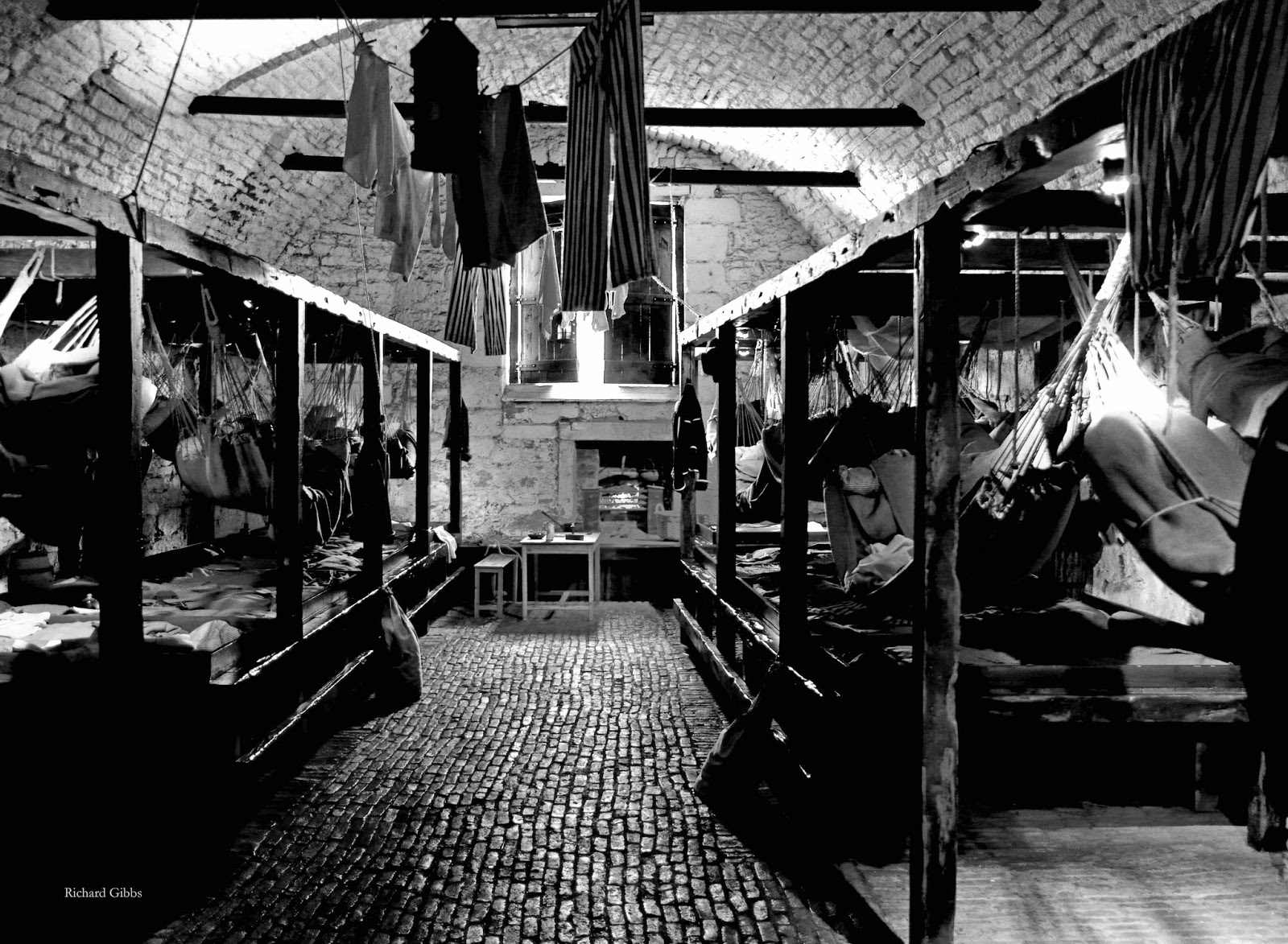 At that time, the old tenements of were hardly less crowded, and the swamps that were once known as the Nor' Loch (now ) were infamously fetid and fowl.  I am inspired, by the motto over the gate (Nemo mi impune lacessit - watch it, pal) and by the way the great buildings rise from the volcanic rock, a natural glasswork blown in black and grey; and I am inspired by the views, across to the Firth of Forth and out to Arthur's Seat.  Up the in the Camera Obscura I see distorted films of shadows walking, buildings quivering, traffic shivering.  Hogwarts appears out of the turrets of George Heriot's School, and the gothic pile of the seems about to launch itself skywards to leave behind.

The gate to the Greyfriars Churchyard stands ajar, and I slip in to pay my respects to  Greyfriars Bobby, one of the more famous dead of this great city.

Popularised in a 1912 novel by Eleanor Atkinson, and then sweetened by a Disney film in 1963 (which I went to see under the misapprehension that it was about Billy Bunter?) the story is of a Skye terrier who refused to desert his deceased master, maintaining a vigil over his grave for fourteen years.  Also in the graveyard I note some iridescent plastic flowers at the foot of a monument.

Who, I wonder, still reveres the memory of George Buchanan, tutor to both Mary Queen of Scots and James VI, who died in 1582?  I must brush up my Latin, and study De Jure Regni apud Scotos, published in 1579, condemned in 1584 and again in 1664, and burned by the in 1684.  Some recommendation!

At the , I meet John Knox, a hard man to like.  His house, or that that bears his name, dates from the fifteenth century and, despite many changes, its metre-thick walls, erratic steps, painted ceilings and tiled fireplaces evoke times, and lives, past.  For part of the sixteenth century this was the home of a jeweller and goldsmith by the name of James Mossman (executed 1573 for insurrection), who let parts of the ground floor to other merchants.  Having been ordained a catholic, but then in exile a pupil of Calvin, from 1560 until his death in 1572 John Knox was a Minister at St Giles Cathedral, where his influential preaching led the Scottish Reformation.  He was instrumental in the abdication in 1567 of Mary Queen of Scots, who had resisted his entreaties to leave the Church of Rome and to adopt a more austere lifestyle, though his own second marriage, to a sixteen year old when he was in his fifties, did not impress her favourably.

She is reputed to have said, I fear the prayers of John Knox more than all the assembled armies of Europe, and indeed  Knox's preference for a King brought up as a Presbyterian had consequences for us all, partly through his effect on the Scottish Covenanters who, in 1638, declared their right to national sovereignty.

The house was rescued from its decline as a slum tenement by the Church of Scotland in 1850, and it stands as a memorial to Knox and his circle, which included George Wishart (Wisehart), who was burned at the stake in 1546.  On the wall of an upstairs office a board bears Knox's prayer: And so I end.... Rendering my troubled and sorrowful spirit in the hands of the Eternal God, earnestly trusting at His good pleasure, to be freed from the cares of this miserable life and to rest with Christ Jesus my only hope and life.

Tripping on the seventh stair as I return to earth, I marvel at how one man alone can have so much influence on a whole populace, though once more I hear the voice of David Hume:  Nothing is more surprising than the easiness with which the many are governed by the few.

Down Canongate I pause in front of the statue of Robert Fergusson, whose arm is filled with pink flowers.  In his 24 years he achieved such fame that Robbie Burns lamented him as his elder brother in the muse.  His poem, Auld Riekie, caught both the life of eighteenth century , and the public imagination...
On stair wi tub, or pat in hand,
The barefoot housemaids loo to stand,
That antrin fock may ken how snell
Auld Reikie will at morning smell:

Following a head injury, perhaps the result of falling downstairs, he was taken from his mother’s house and locked in the Bedlam next to the poorhouse. He died within weeks and was buried here in an unmarked grave.  It was Robert Burns who, thirteen years later, commissioned a headstone for him, and then, later still, Robert Louis Stevenson intended to renew the stone, though he died before this was carried out.  The statue, by David Annand, was unveiled in 2004.  The late poet, Robert Garioch, recalled Fergusson as: faur apairt/in time, but fell alike in hert.....  Touching sympathy.  Adam Smith, political economist and philosopher, best known for his book The Wealth of Nations, was also buried in this Kirkyard, in 1790.

I walk on down, passing the curiously maritime architecture of the Scottish Parliament Building; past the traditional Palace of Holyroodhouse, and up the path above Salisbury Crags towards Arthur's Seat, in Holyrood Park. 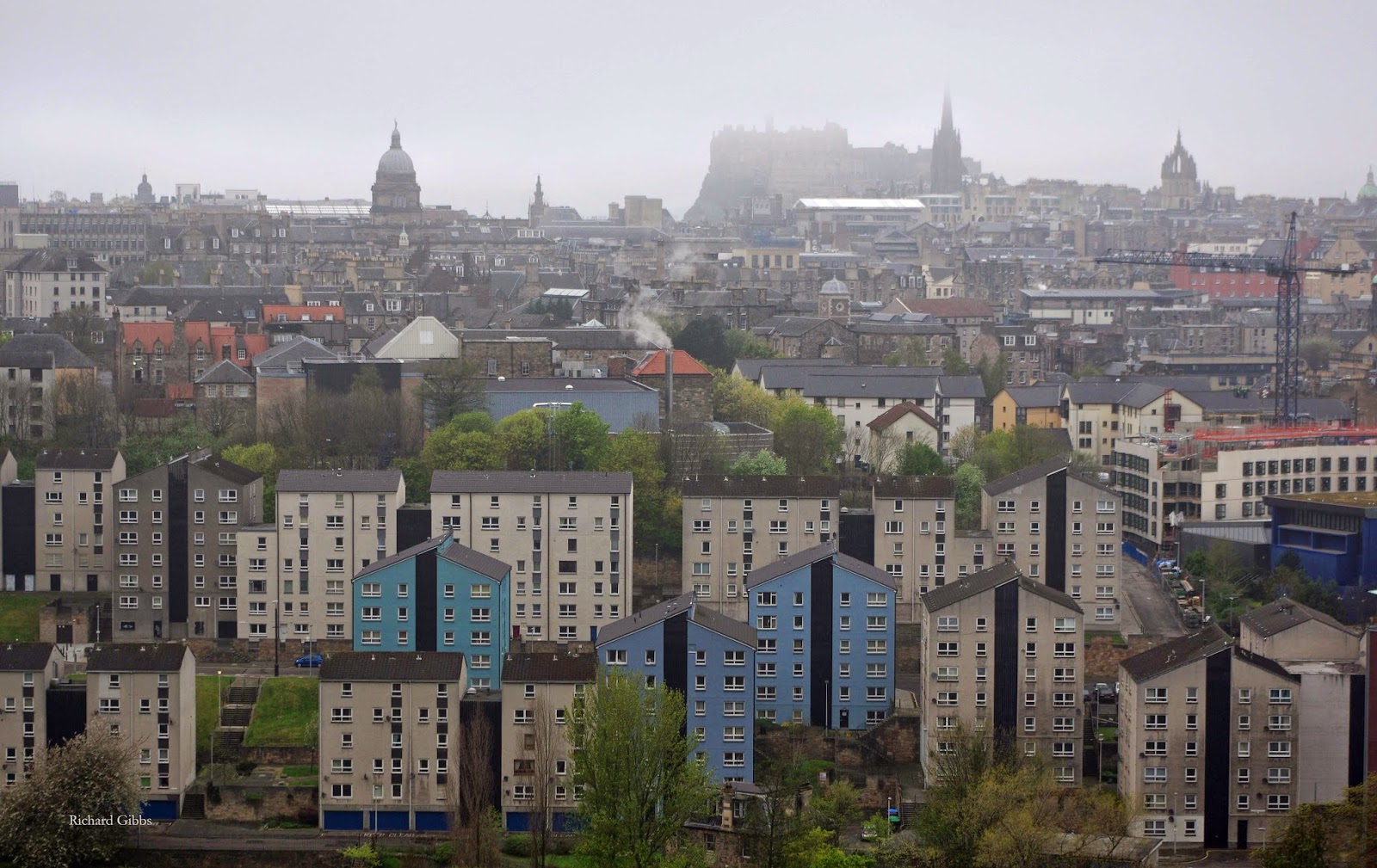 But the weather closes in and soon the city is obscured, a white mist furled across the scene like a sea of porridge.

A figure ahead, walking a dog, reminds me of Rebus, but faint-hearted, I return to the comforting dark of the city streets.

As dusk settles, and rain begins to shine the stones, I seek shelter within the enticing brightness of pubs and bars.

A drink in The Halfway House is a convivial treat, and then a visit to The Cafe Royale reveals a different clientele, surrounded by opulence and fed with style.

Medusa at the next table turns my scallops to stone, but I only see her through a prism.

Outside it is wet now, the cherry blossom plastered to the cobbles, the ochre walls darkened by the rain.

I wander the New Town, to see on his horse, catching his death no doubt, and to admire the neoclassical harmony of , which Robert Adam designed just before he died in 1791. 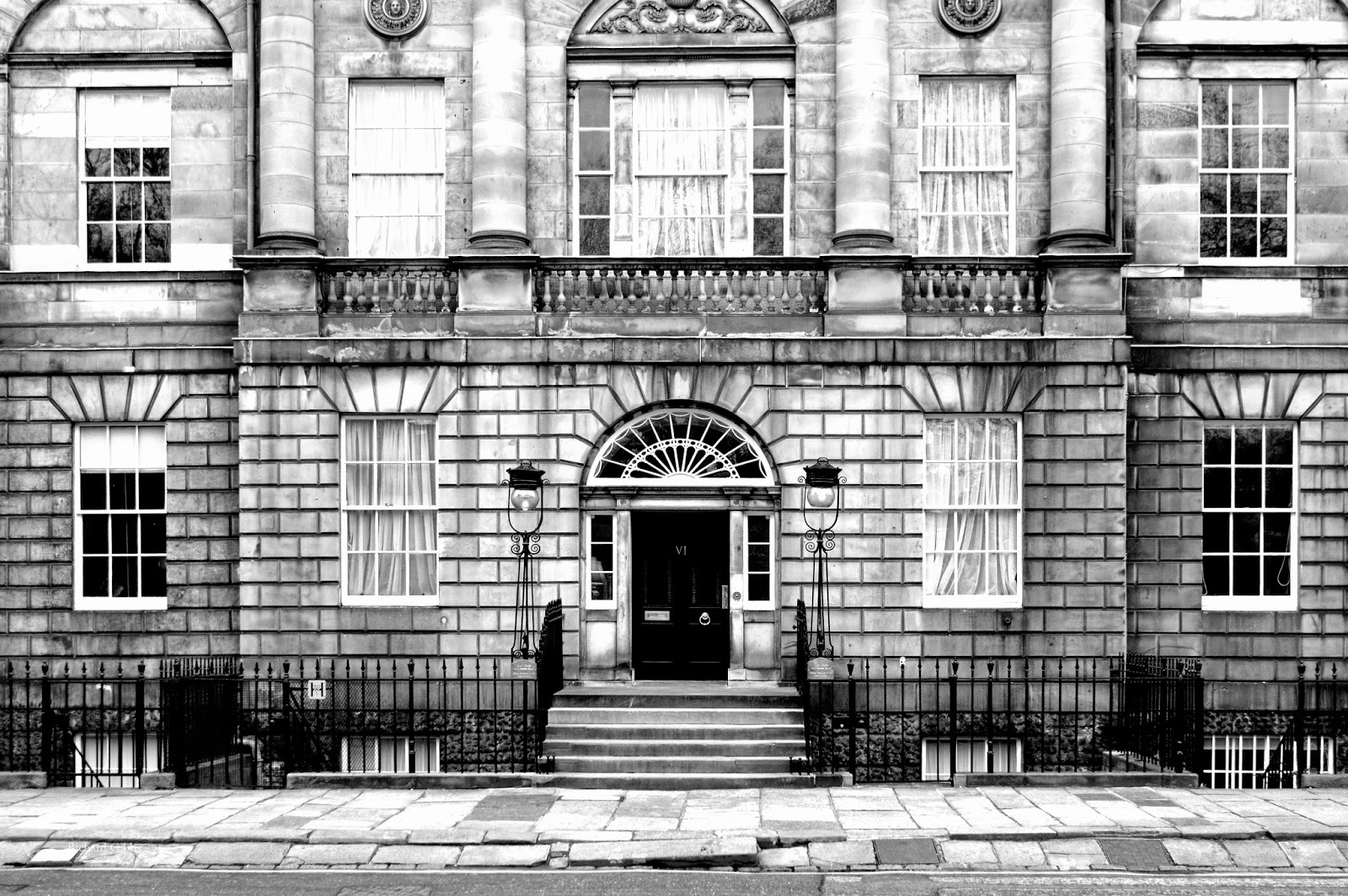 On the north side at number 6 is Bute House, the official residence of the First Minister, though it seems deserted just now, and curiously vulnerable.

A few streets away I catch up, eventually, with Ian Rankin, drinking with Jackie Leven in The Oxford Bar, a pub that nicely breathes a bygone air.  It was mid-evening quiet.  Rebus was seated in the back room with an IPA and the Evening News when I arrived.  I asked him if he wanted a refill.  Have I ever been known to refuse?

In Standing in Another Man's Grave, John Rebus finished the paper, while sounds of laughter came from the bar area.....  He lifted the empties, preparing to join the throng in the front room.  Then he paused, remembering the drive to Tongue and back: the isolation and stillness, the sense of a world unchanged and unchanging.
Where are you?
Nowhere.  Quite literally.
'But I prefer it here,' he told himself, making for the bar.....

I know how he feels. 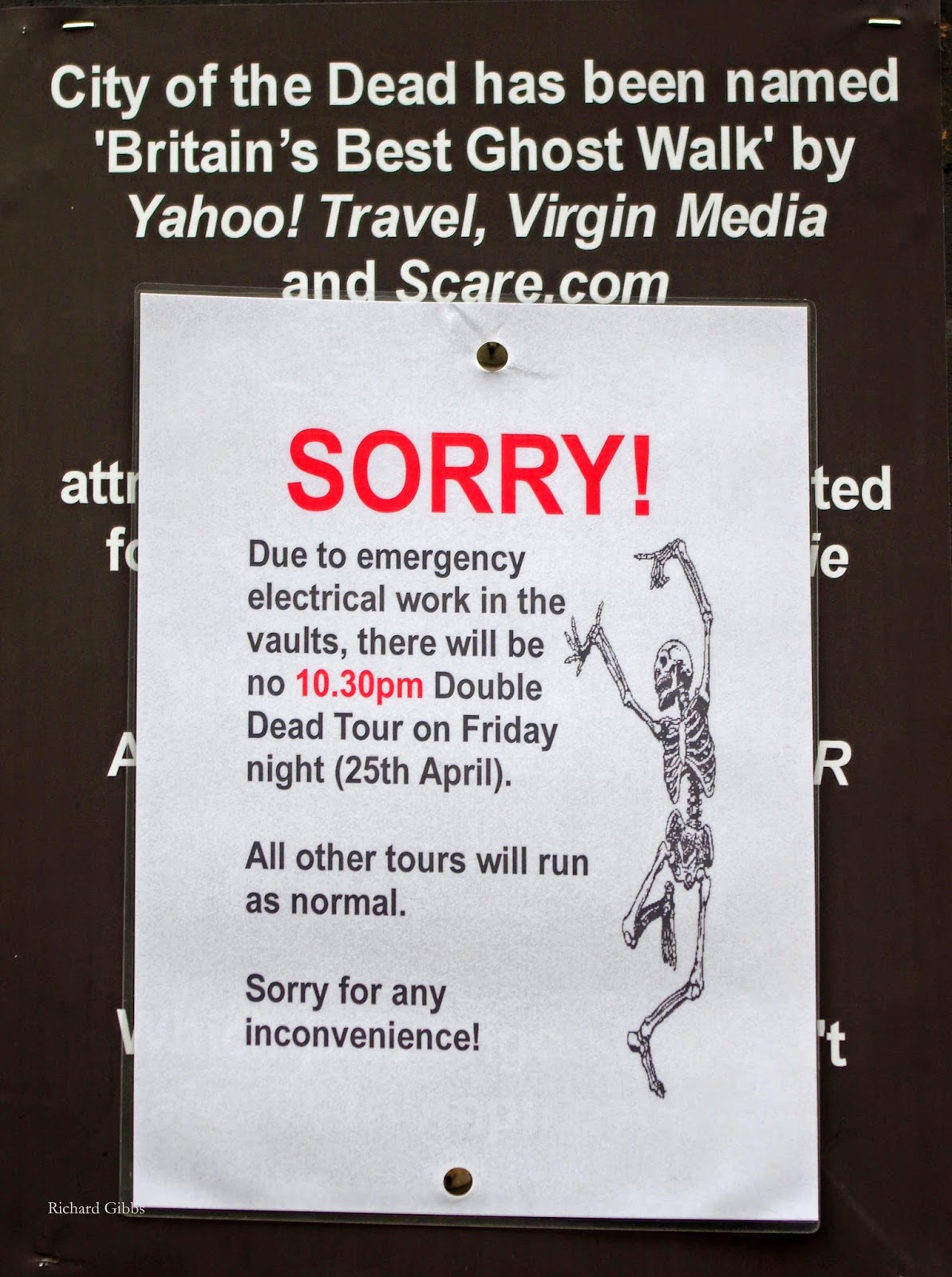 Both Sides of the Tweed
Dick Gaughan