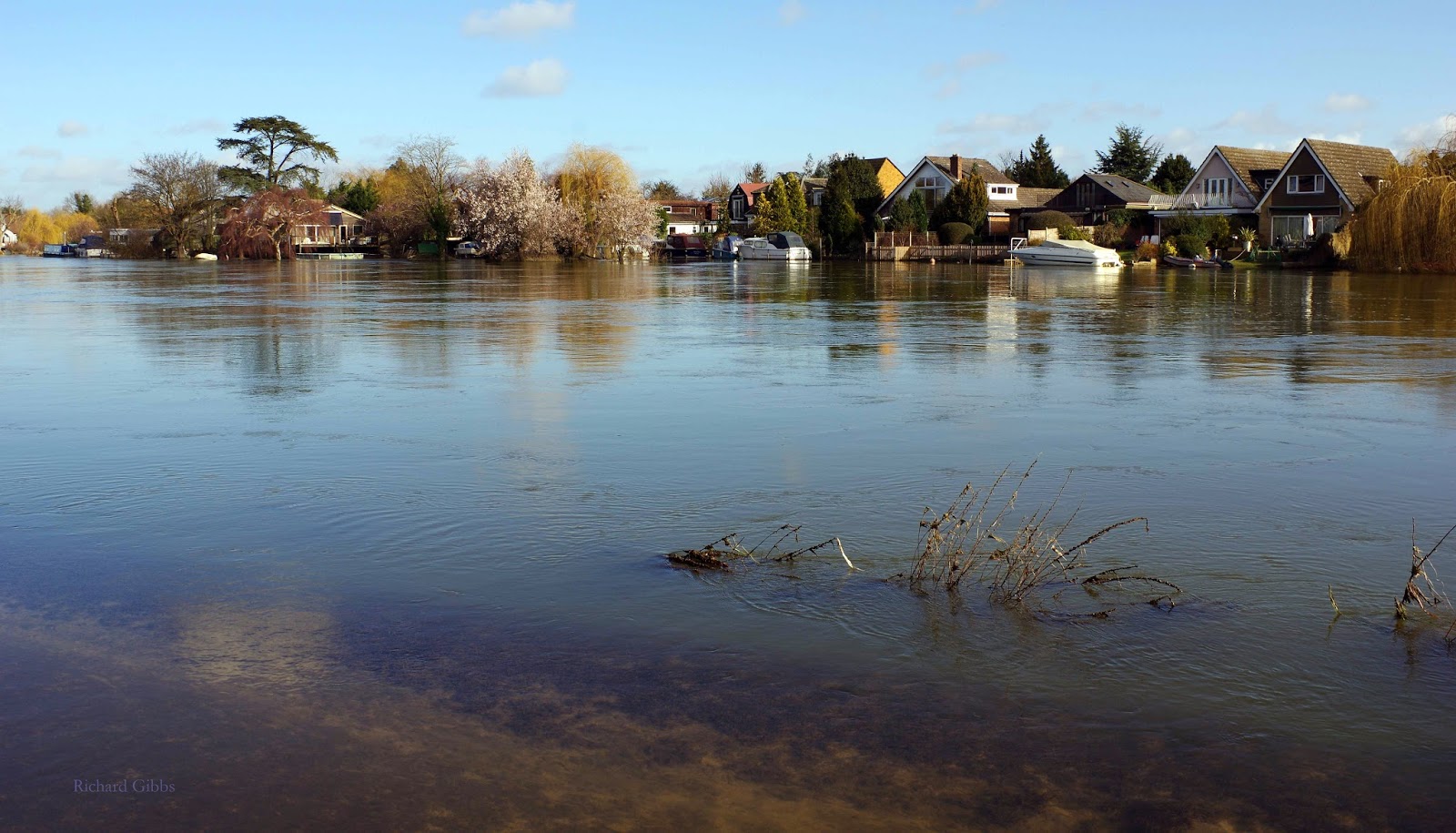 They shall not hurt nor destroy in all my holy mountain: for the earth shall be full of the knowledge of the LORD, as the waters cover the sea........  (Isaiah, 11:9)

Something is not quite right, down by the river.  The footpath has disappeared by Old Windsor, and garden cherry trees in Wraysbury emerge from the waters like mangroves.

Looking across the Thames, we can make out Heathrow airport, just beyond the King George VI reservoir and the Perry Oaks Sewage Works.


Closer in, the houses of Hythe End appear to be surrounded by waters, at least.....


But one fine House of  Windsor (the home of the once Saxe-Coburg-Gotha family) sits above the hurly burly of the river flows, for the moment....

Though if I were Queen, I would probably do something about the flight path overhead, with its score of merlin decibels chinkering my Meissen every thirty seconds..... 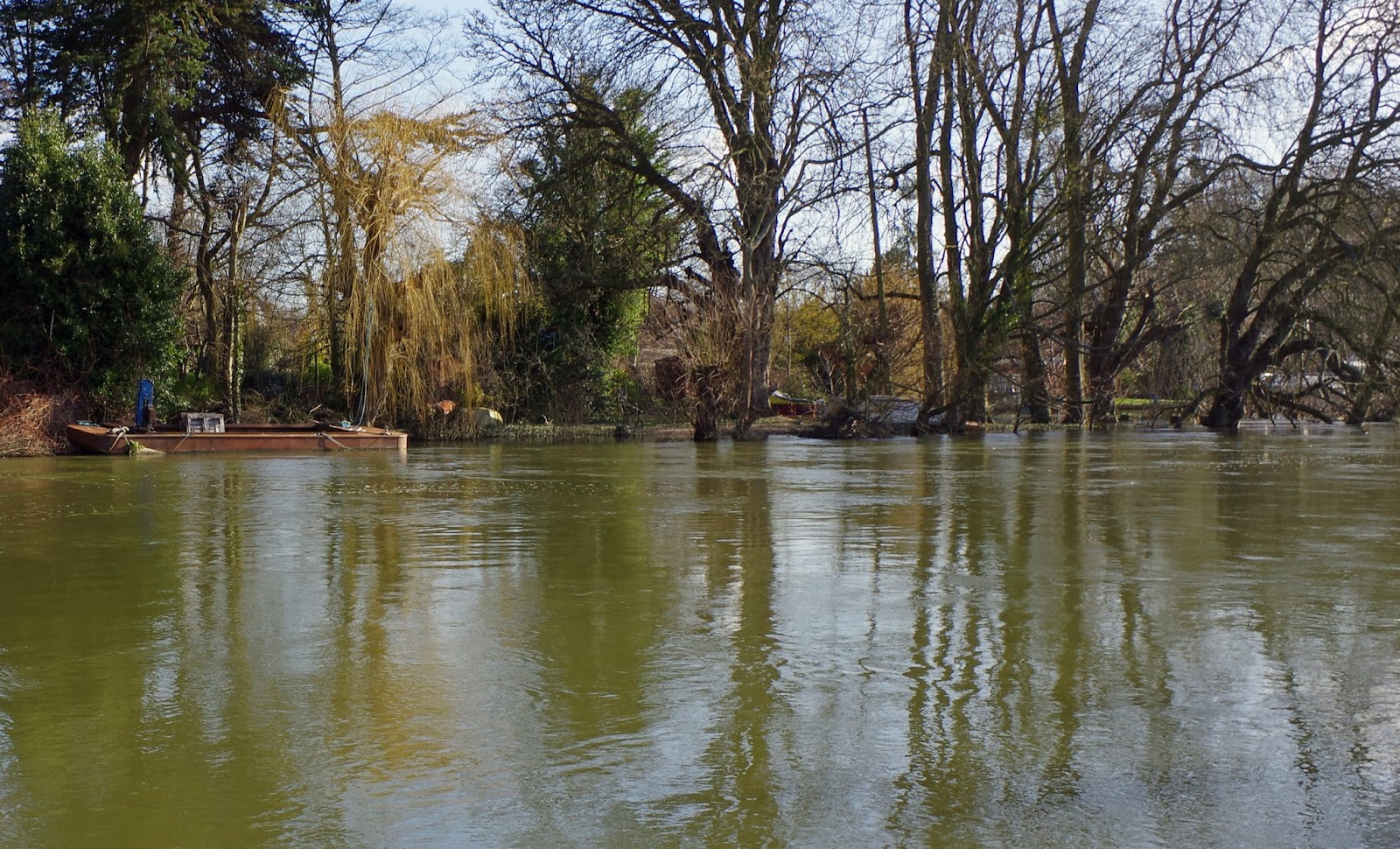 Anyway, I sense ironies about the place.  The place where King John sealed the Magna Carta is flooded.  King John was also famous for losing his treasure in the Wash.  Perhaps not a king for stability. But then next year the American Bar Association will revisit their memorial here to celebrate the 800th anniversary of the signing of the Great Paper, which subsequently formed the basis of the American Constitution. Not, note, the English, British or United Kingdom Constitution (for we do not have one) [which might perhaps have presented something of an obstacle to Alex Salmond?]

There is another little irony here in the Lutyens Lodges, which guard the north-western approach to the meadows. These were designed as memorials to Urban H Broughton, MP, in 1929.  Notice the lack of gutters - a design feature allowing rainwater to cascade straight off the roof to soak away through slits in the paving below. 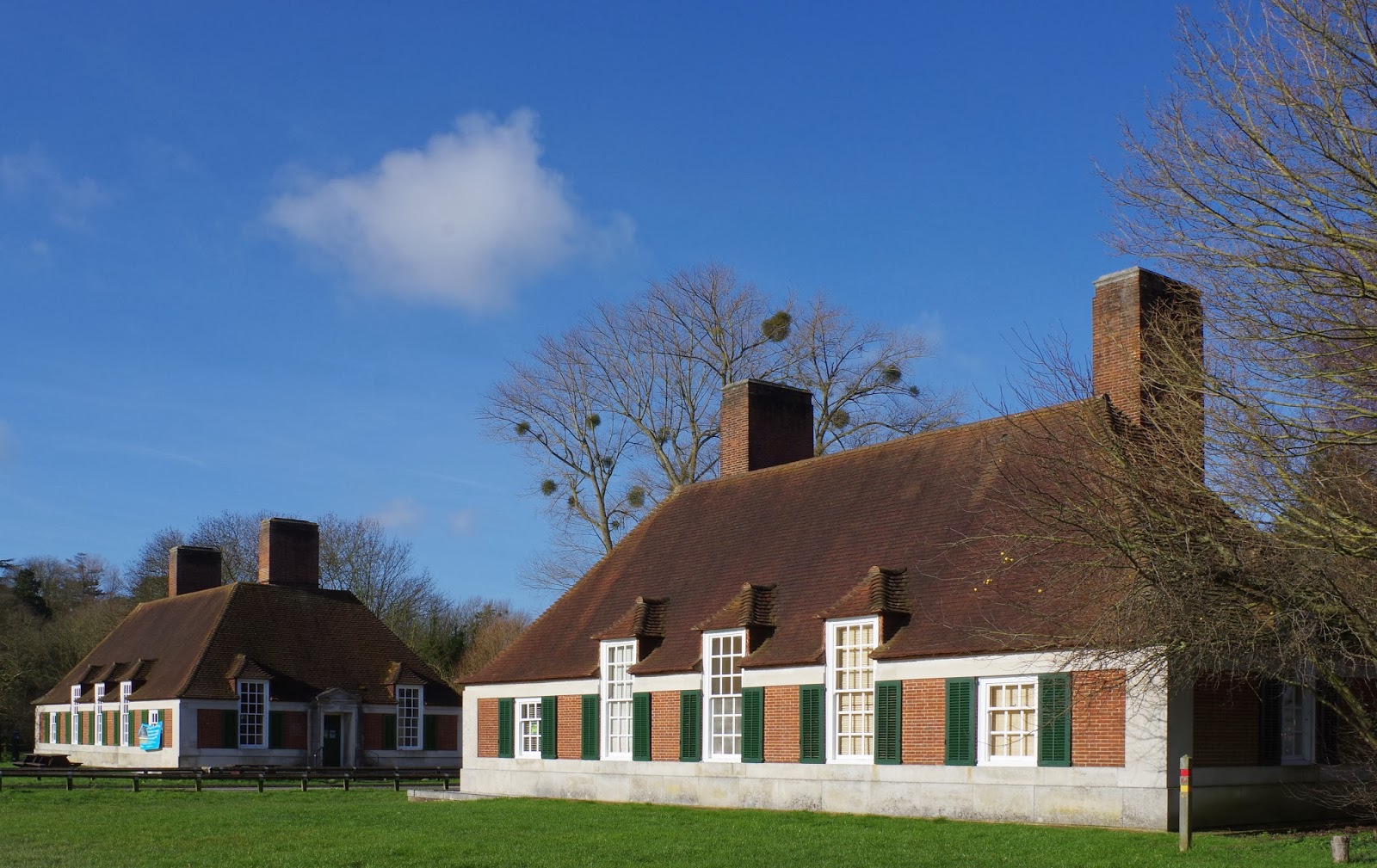 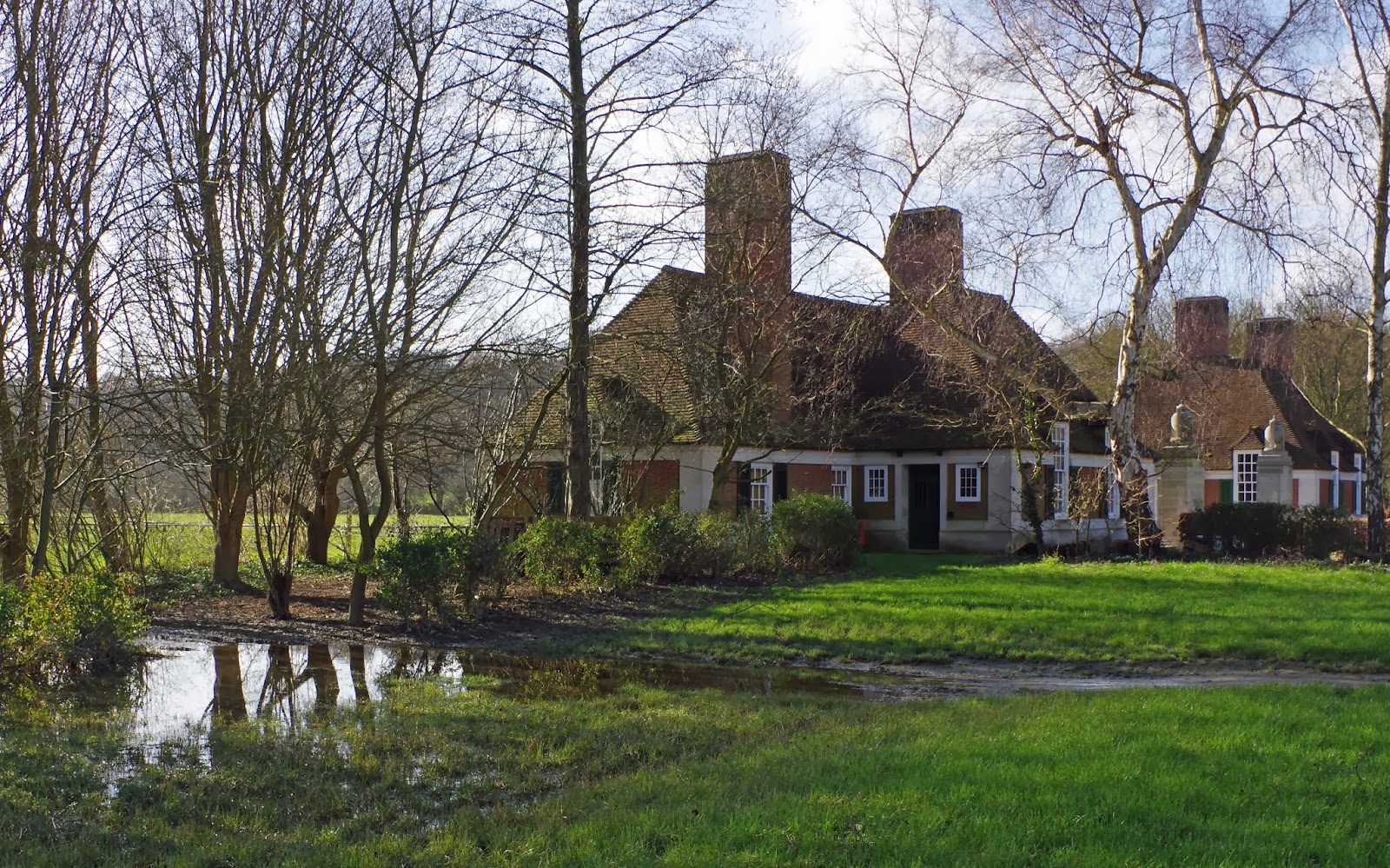 [I gather they are taking the roof off Castle Drogo because of rain water too!]

Anyway, that is an aside.  The main concern here is with the elements, and we've seen enough of water for the moment. So, climbing up the National Trust earth of Cooper's Hill, we come to the sky, the air, and soaring above is an Astral Crown in blue and gold, topped by a single star that pierces the heavens. 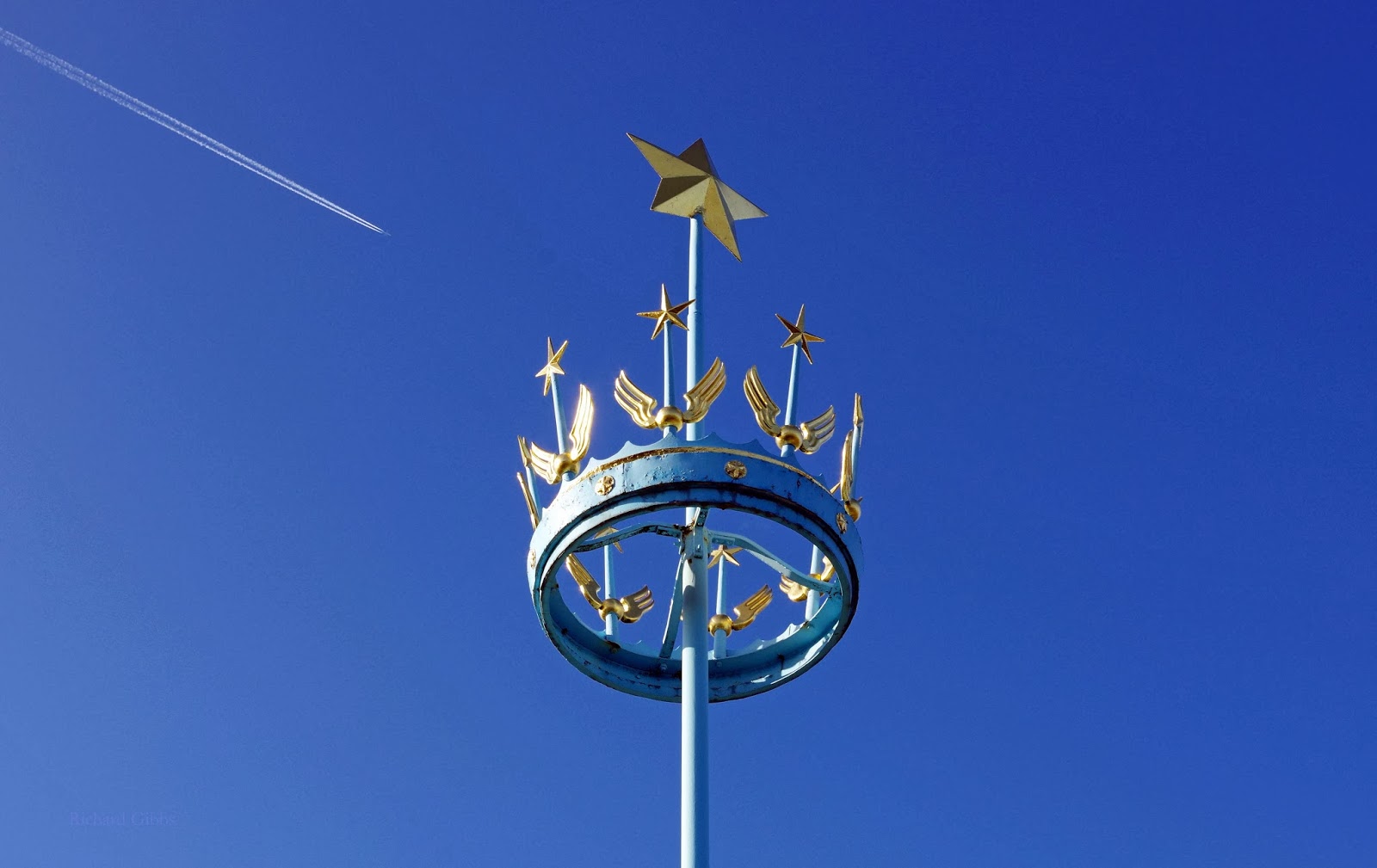 This is the Air Forces Memorial, Runnymede, designed by Sir Edward Maufe (who also designed Guildford Cathedral), opened by the Queen in 1953, on land donated by Sir Eugen and Lady Effie Millington-Drake, and, despite all that, it is a most moving monument. 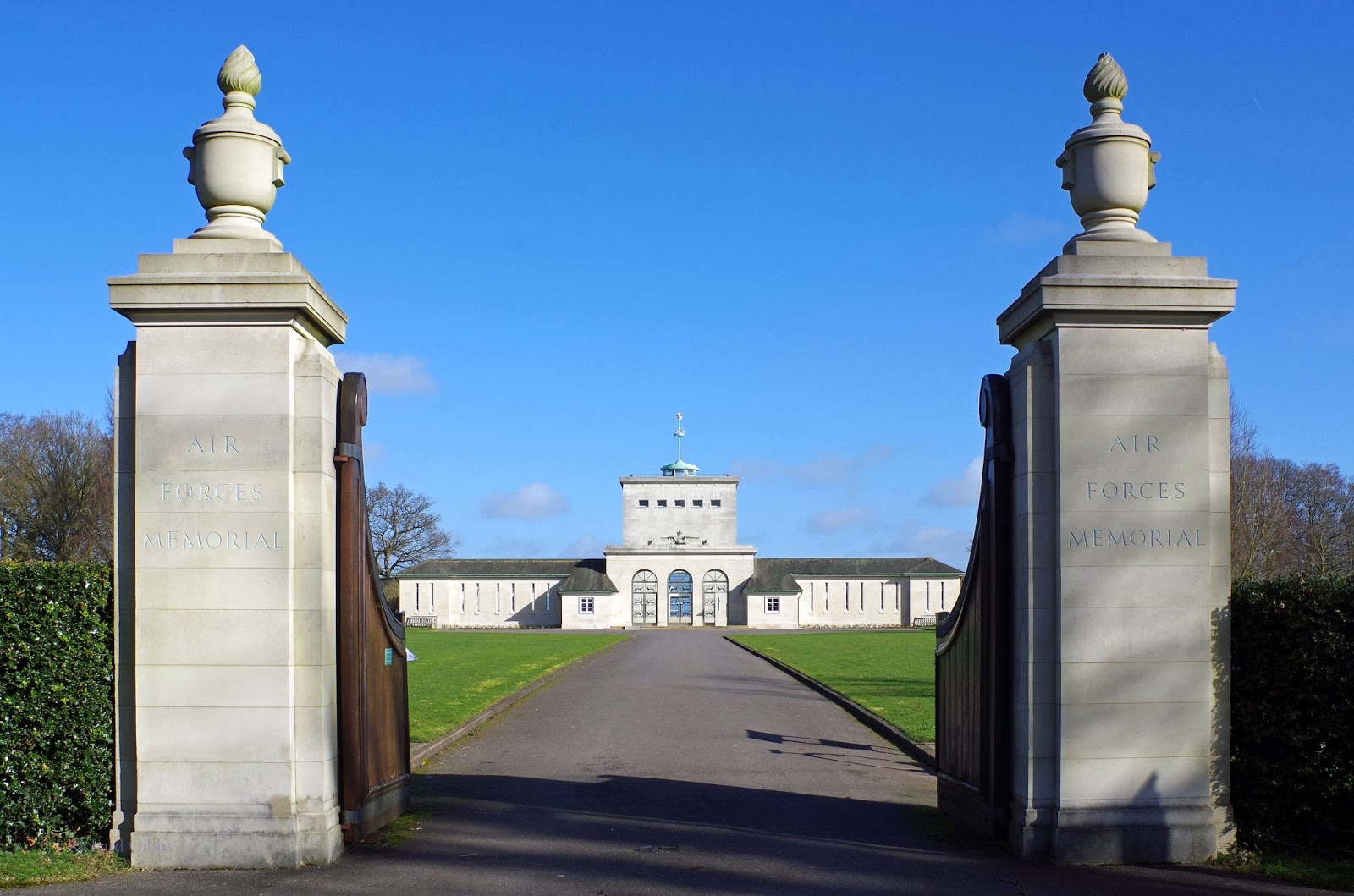 It is perhaps another irony that we now take for granted the conquest of the air, while we flay ourselves and each other, gnashing teeth and wailing, when river waters rise a few inches above lawns down by the banks..... 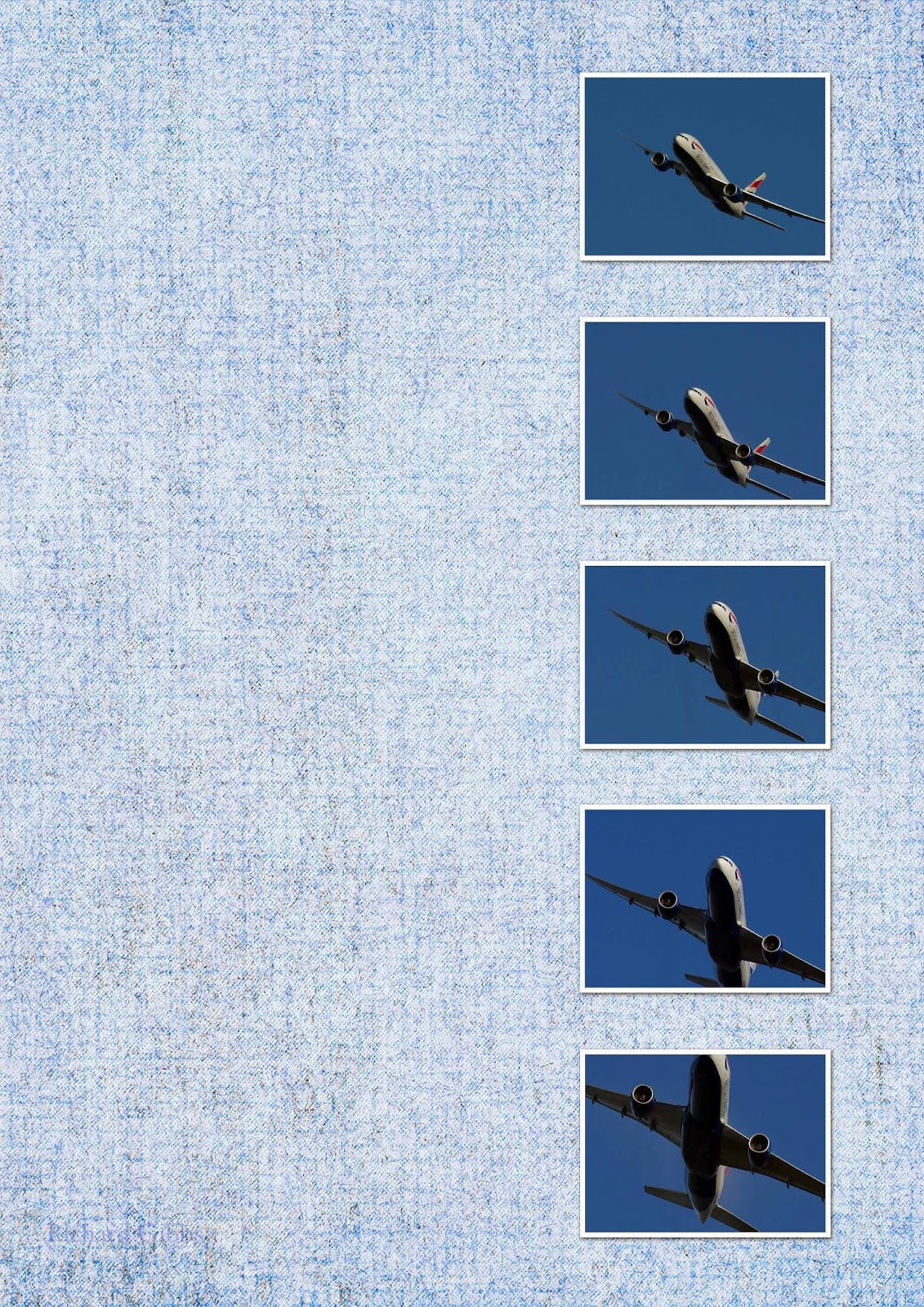 But those magnificent men in their flying machines did not all have it easy, and this great shrine is to some of the 116,000 men and women of the Air Forces of the Commonwealth who gave their lives in service in the Second World War, many of whom were lost without trace. 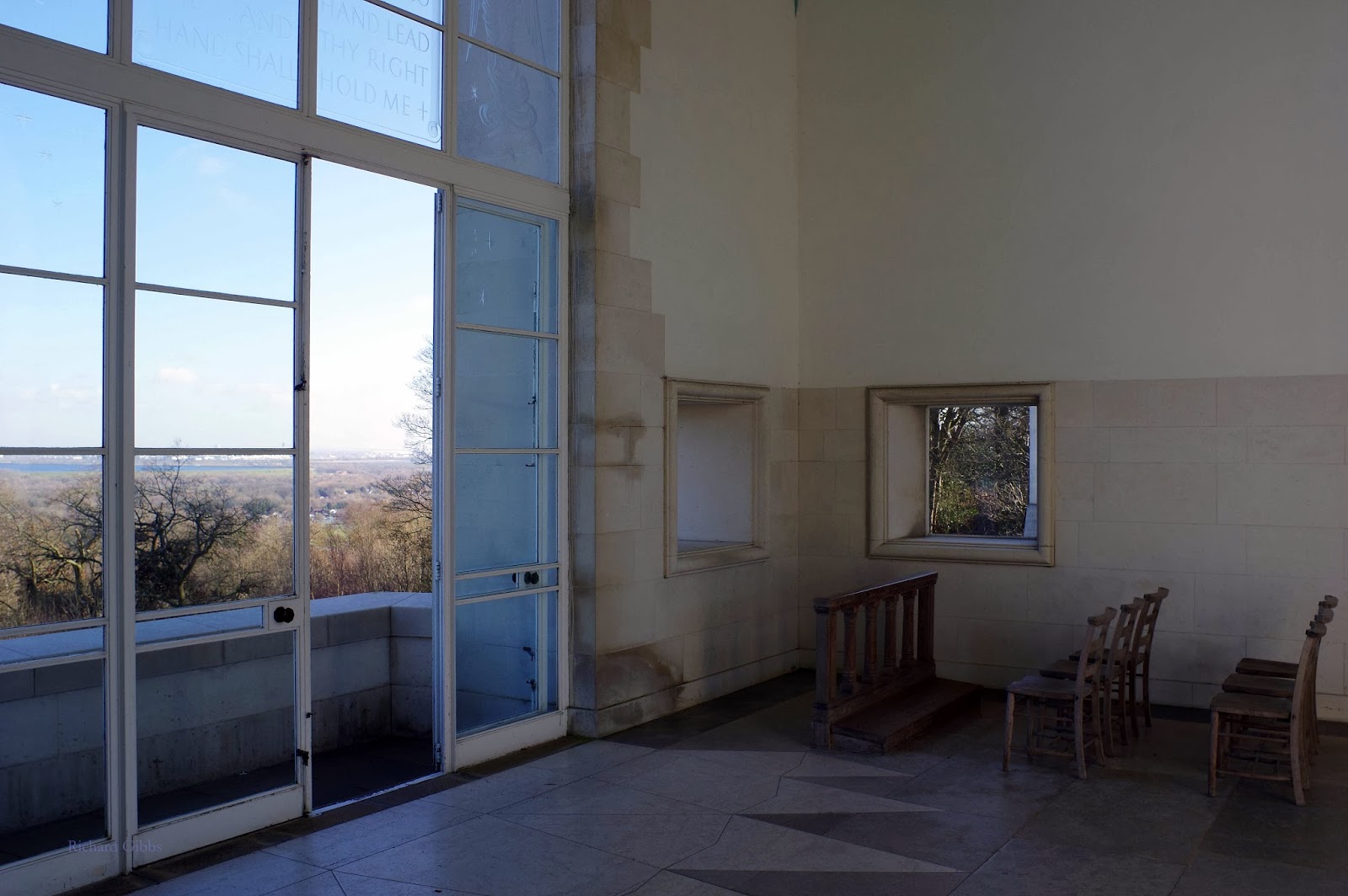 This place of reserve and quiet commemorates over twenty thousand of these who were lost in operations from bases in the United Kingdom and North and Western Europe.  Most of them, 15,462 in fact, served in the Royal Air Force, but there were many from the Royal Canadian, Australian, New Zealand and Indian Air Forces, the South African Air Force, as well as from the Women's Auxiliary Air Force and the British Overseas Airways Corporation (BOAC). 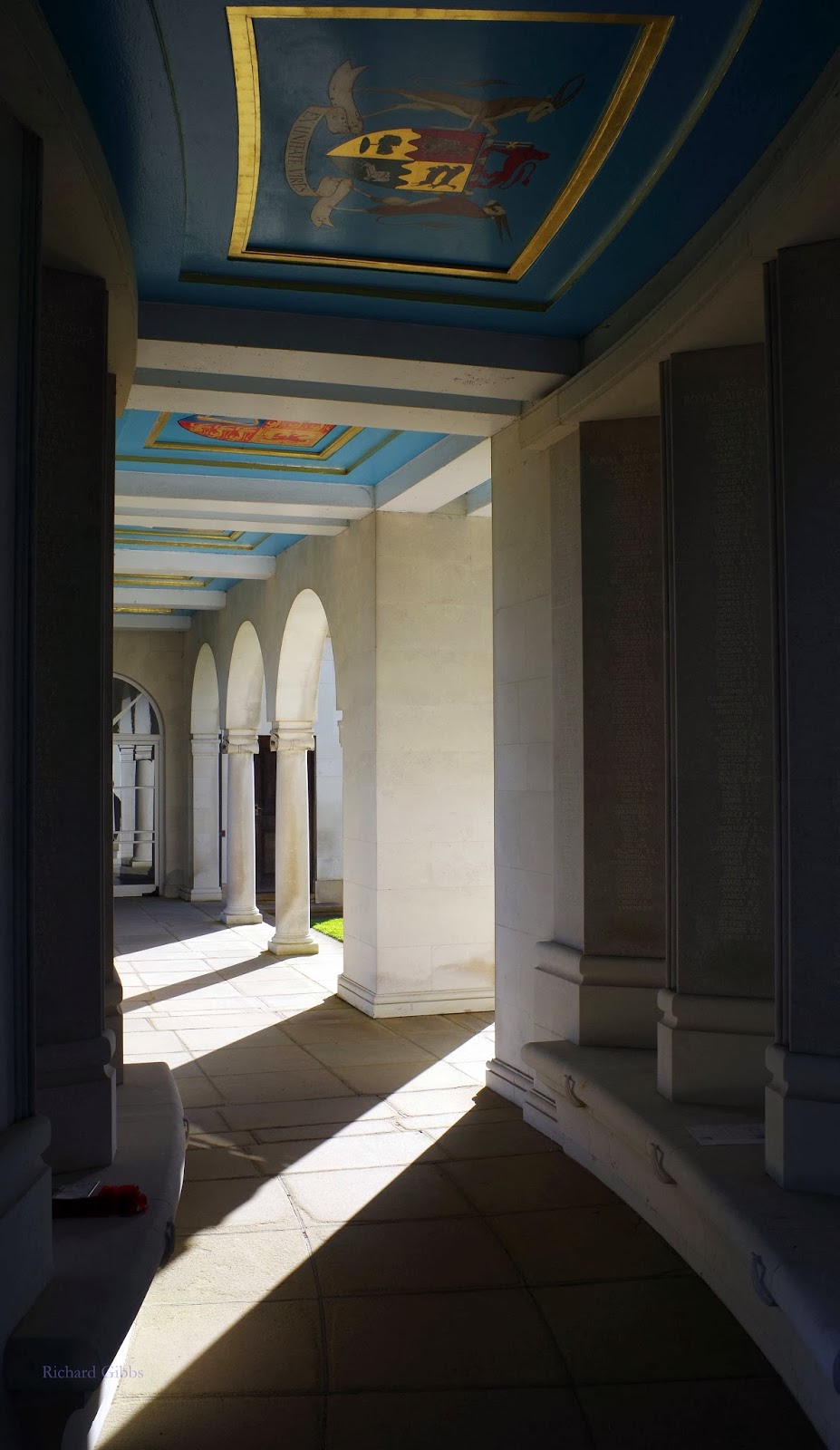 Their names are engraved on the walls, reveals and mullions of the windows, grouped according to the year of death, in alphabetical order. 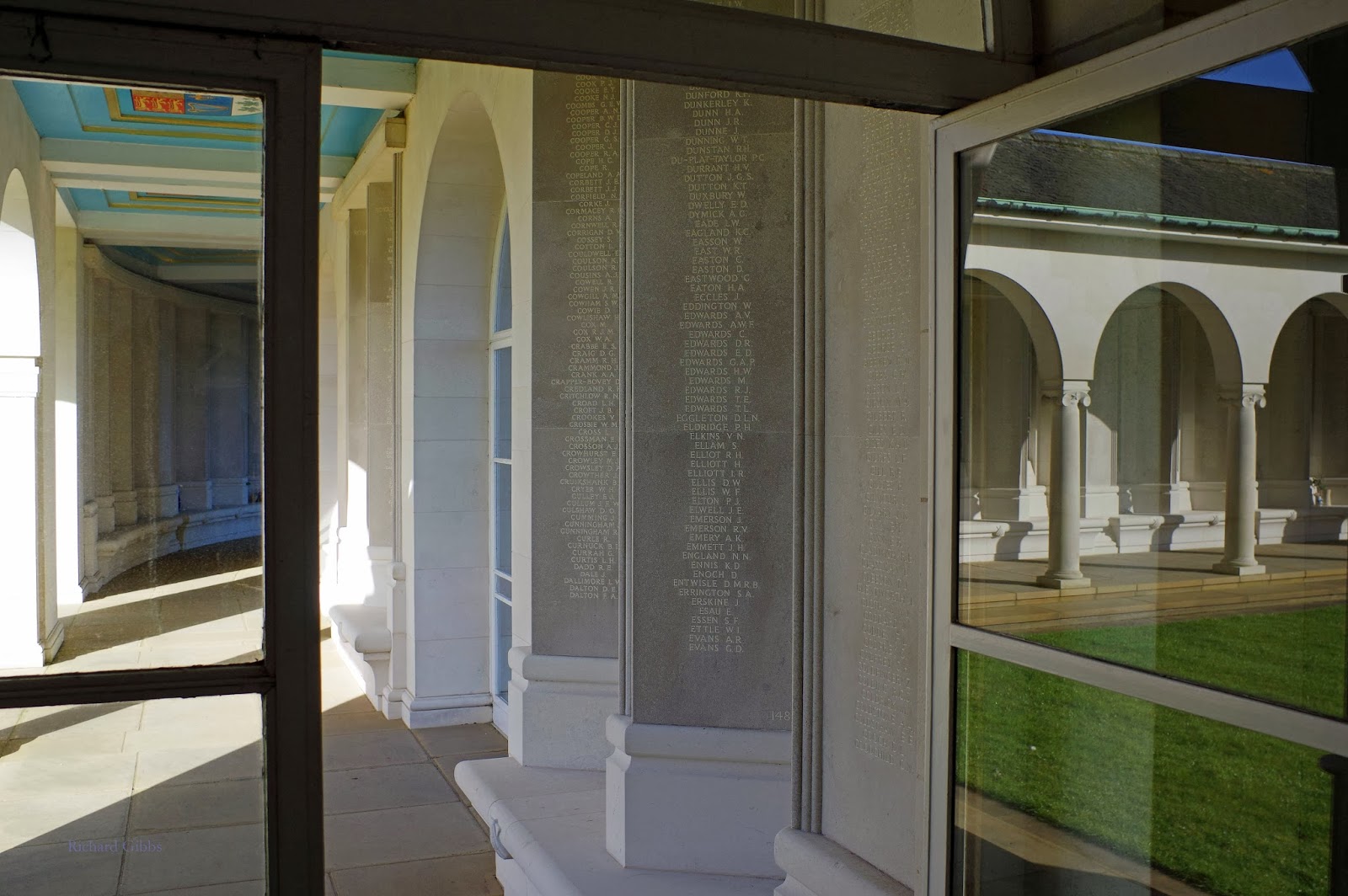 And relatives and friends still visit to leave mementoes to show their love and respect: 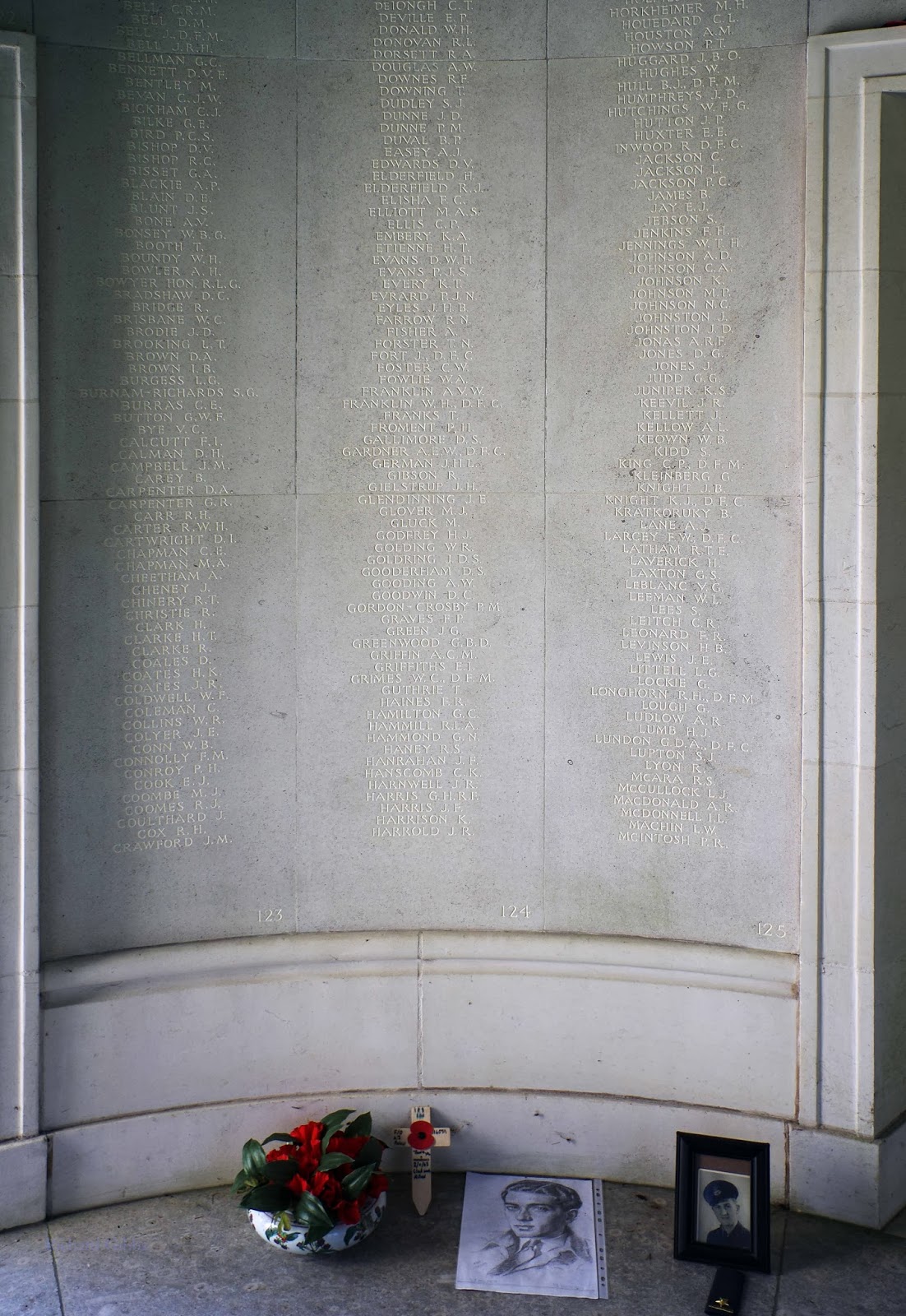 And wreaths record more formal tributes in the shadows: 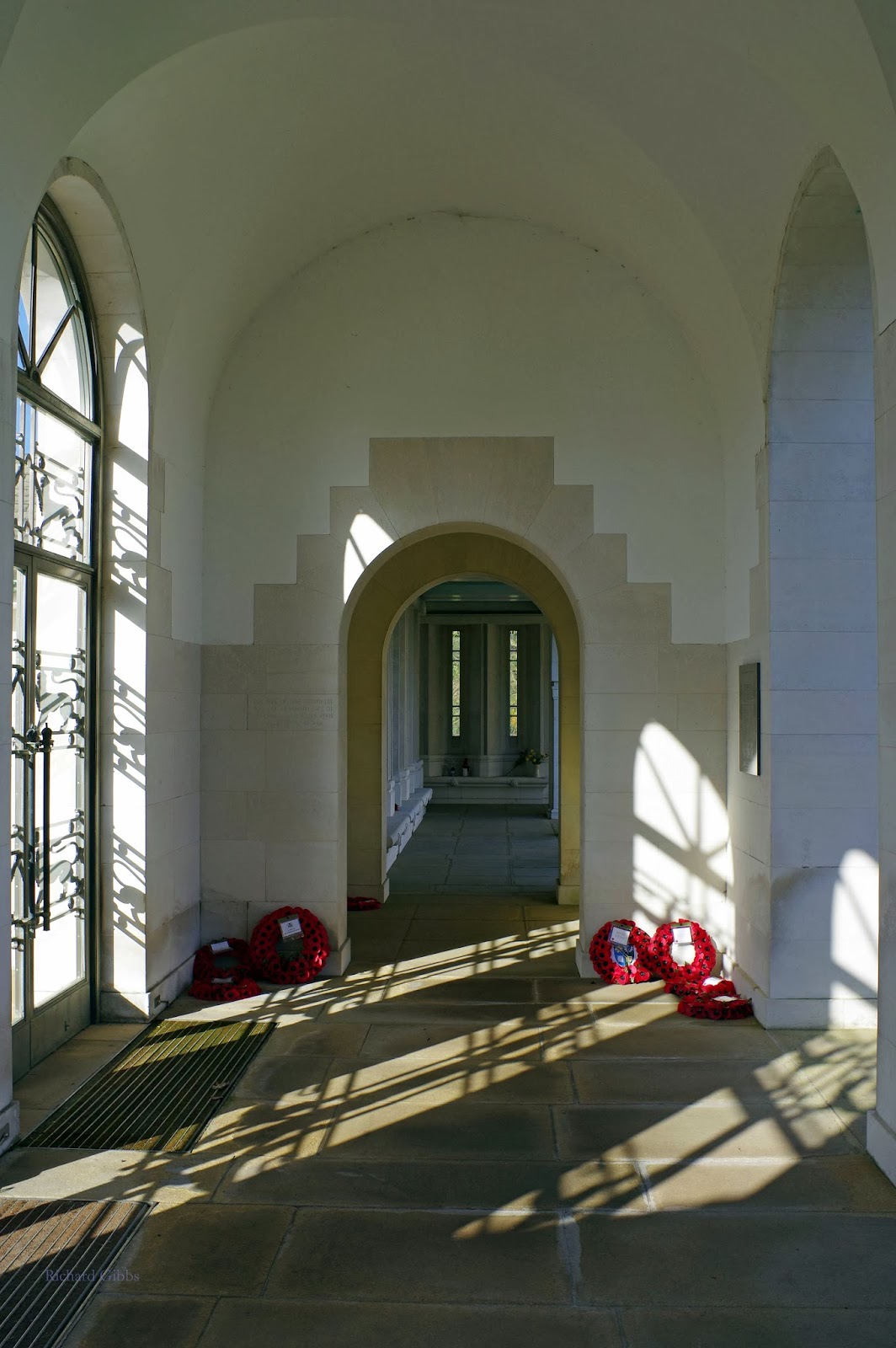 The building itself, in keeping with the Commonwealth War Graves Commission's style (Sir Edward Maufe was their principal architect in the years following the Second World War), is cool and sober.  The great north window of the shrine is engraved with words from the 139th Psalm, sometimes called the Airman's Psalm:

If I ascend into heaven, You are there;


If I make my bed in hell, behold, You are there.
If I take the wings of the morning,
And dwell in the uttermost parts of the sea,
Even there Your hand shall lead me,
And Your right hand shall hold me. 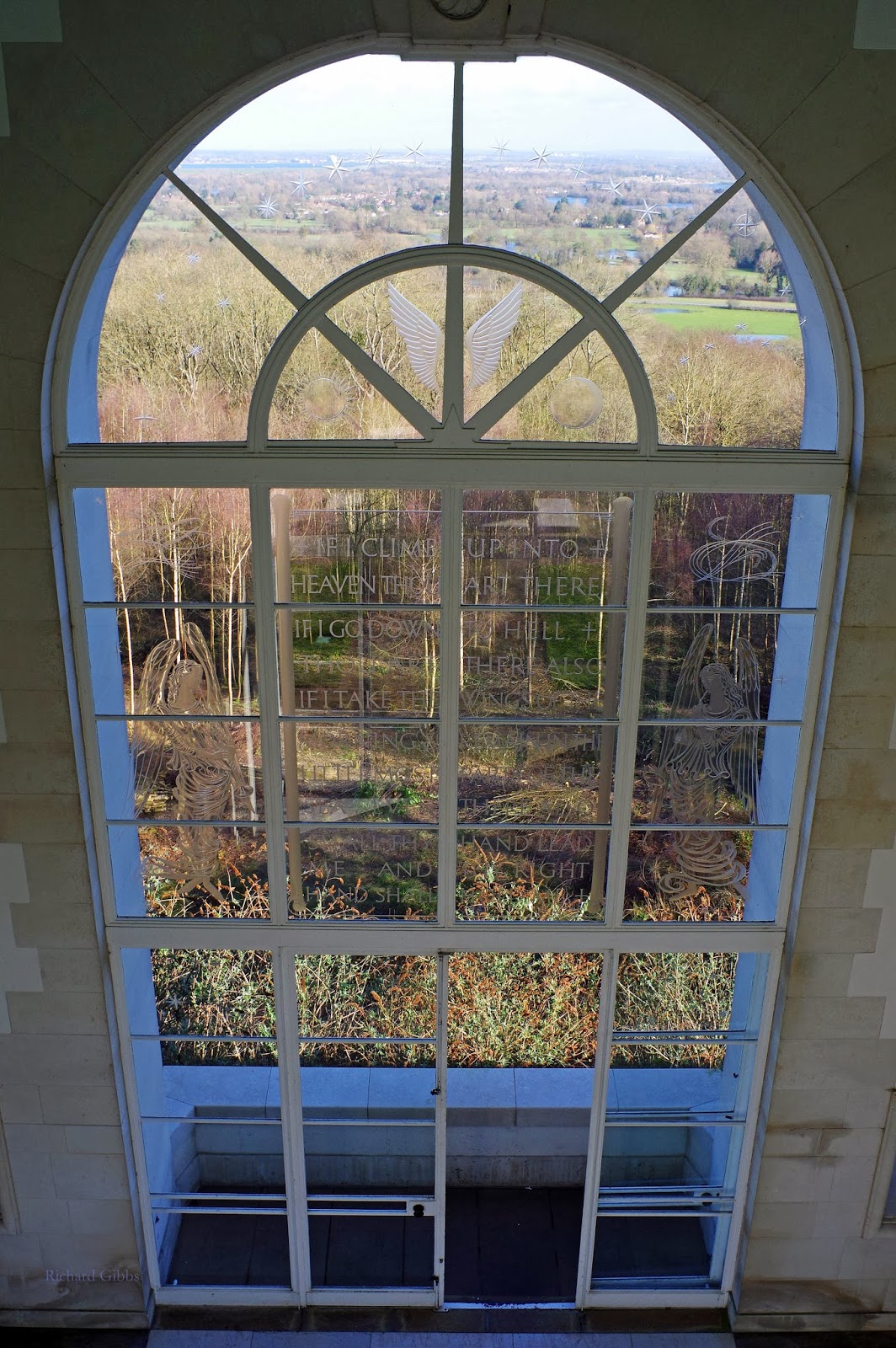 And these words are flanked by angels and vapour trails, copied (the vapour trails that is) from photographs taken during the Battle of Britain. Above is a gallery, with another engraved window.  This poem was composed by Paul H Scott, a student, soon after the memorial was completed.


And then above this is the roof terrace, beneath the crown, with views across the gardens, and also down over the Thames. 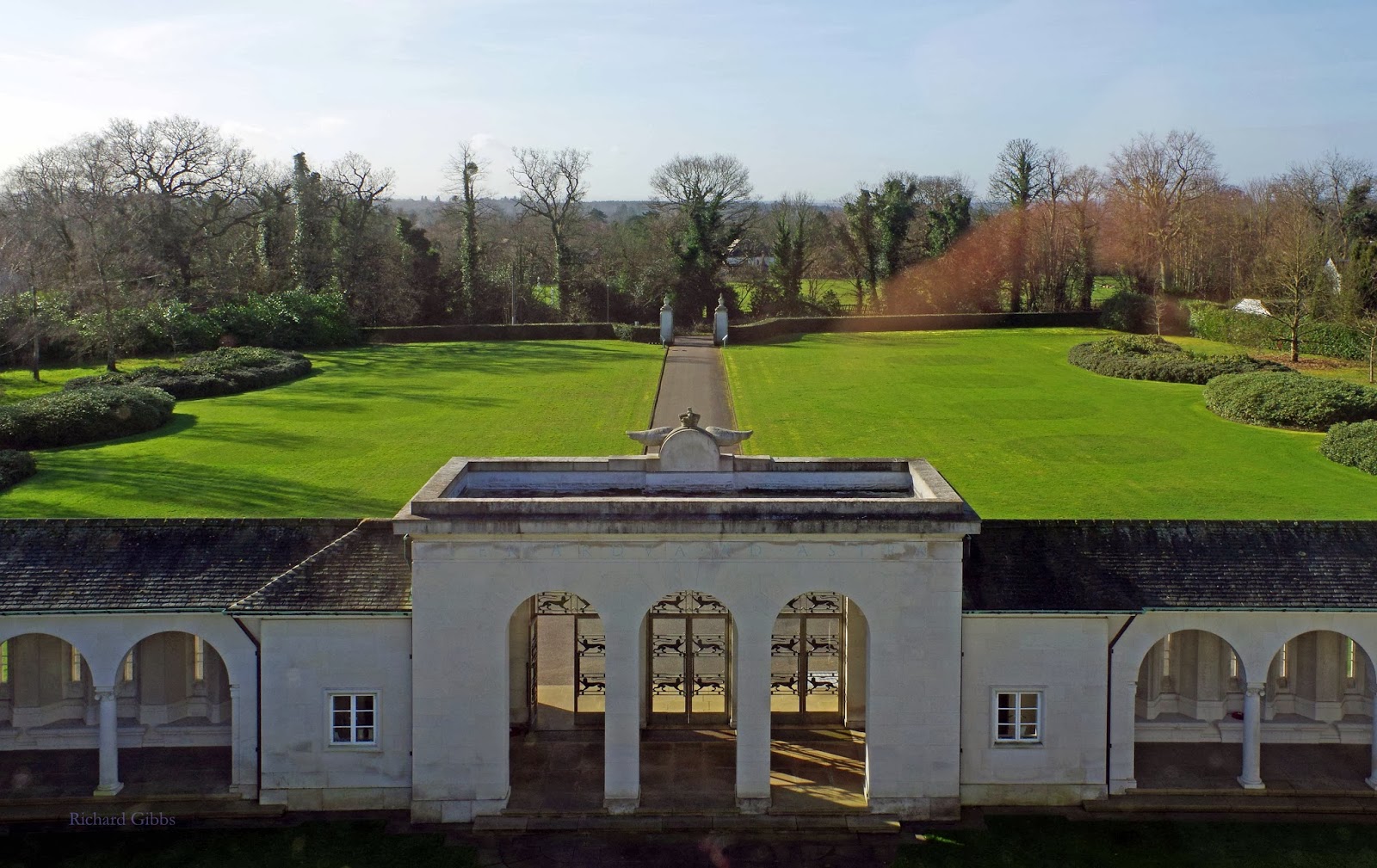 One name that is not found here is that of Richard Hillary, a young airman who was not lost without trace.  His ordeal was by fire, when, on September 3rd, 1940,  just below me and to my left, I saw what I had been praying for - a Messerschmitt climbing and away from the sun. I closed in to 200 yards, and from slightly to one side gave him a two-second burst: fabric ripped off the wing and black smoke poured from the engine, but he did not go down. Like a fool, I did not break away, but put in another three-second burst. Red flames shot upwards and he spiralled out of sight. At that moment, I felt a terrific explosion which knocked the control stick from my hand, and the whole machine quivered like a stricken animal. In a second, the cockpit was a mass of flames: instinctively, I reached up to open the hood. It would not move. I tore off my straps and managed to force it back; but this took time, and when I dropped back into the seat and reached for the stick in an effort to turn the plane on its back, the heat was so intense that I could feel myself going. I remember a second of sharp agony, remember thinking "So this is it!" and putting both hands to my eyes. Then I passed out.

He was thrown from the cockpit and parachuted into the sea, some miles off Margate, whose lifeboat picked him up many hours later.

He had extensive burns to the face and hands (he, like many other Spitfire pilots, refused to wear goggles or gloves) and suffered months of agony undergoing revolutionary plastic surgery.

He never regained complete fitness, but, having recorded his experiences in The Last Enemy, he returned to flying. He was killed on the night of January 7th 1943.  Hillary, on a training flight with his navigator, Walter Fison, died instantly when his Bristol Blenheim crashed in a field near RAF Charterhall.

His charred remains, weighted with sand in his coffin, were returned to his parents, together with his cigarette case, and his will, in which he had written:

I want no one to go into mourning for me.  As to whether I am buried or cremated, it is immaterial to me, but, as the flames have had one try, I suggest they might get their man in the end.

Richard Hillary was 23 when he died.

Richard's story is one of the best known accounts of a fighter pilot's experience in the Second World War. It is now in print again, with an introduction by Sebastian Faulks, who also wrote about Hillary in The Fatal Englishman.  The isolation and almost medieval duelling of airmen is perhaps best expressed by W B Yeats, however, in his poem An Irish Airman foresees his Death, written in 1918, for Major Robert Gregory, the only son of Yeats's friend, Lady Gregory.


I know that I shall meet my fate


Somewhere among the clouds above;
.....


Nor law, nor duty bade me fight,


Nor public man, nor cheering crowds,
A lonely impulse of delight
Drove to this tumult in the clouds;
I balanced all, brought all to mind,
The years to come seemed waste of breath,
A waste of breath the years behind
In balance with this life, this death

It is a final irony that the names, carved into stone, outlive these men and women.  But as Richard Hillary wrote in his will:  I want no one to feel sorry for me.....  In my life I had a few friends, I learnt a little wisdom and a little patience. What more could a man ask for?

It is too late to feel sorry, but it is never too late to remember. And even when our memories have gone, others will be reminded of those who gave their lives.

On the earth, in the water, in the air, and in the fire. 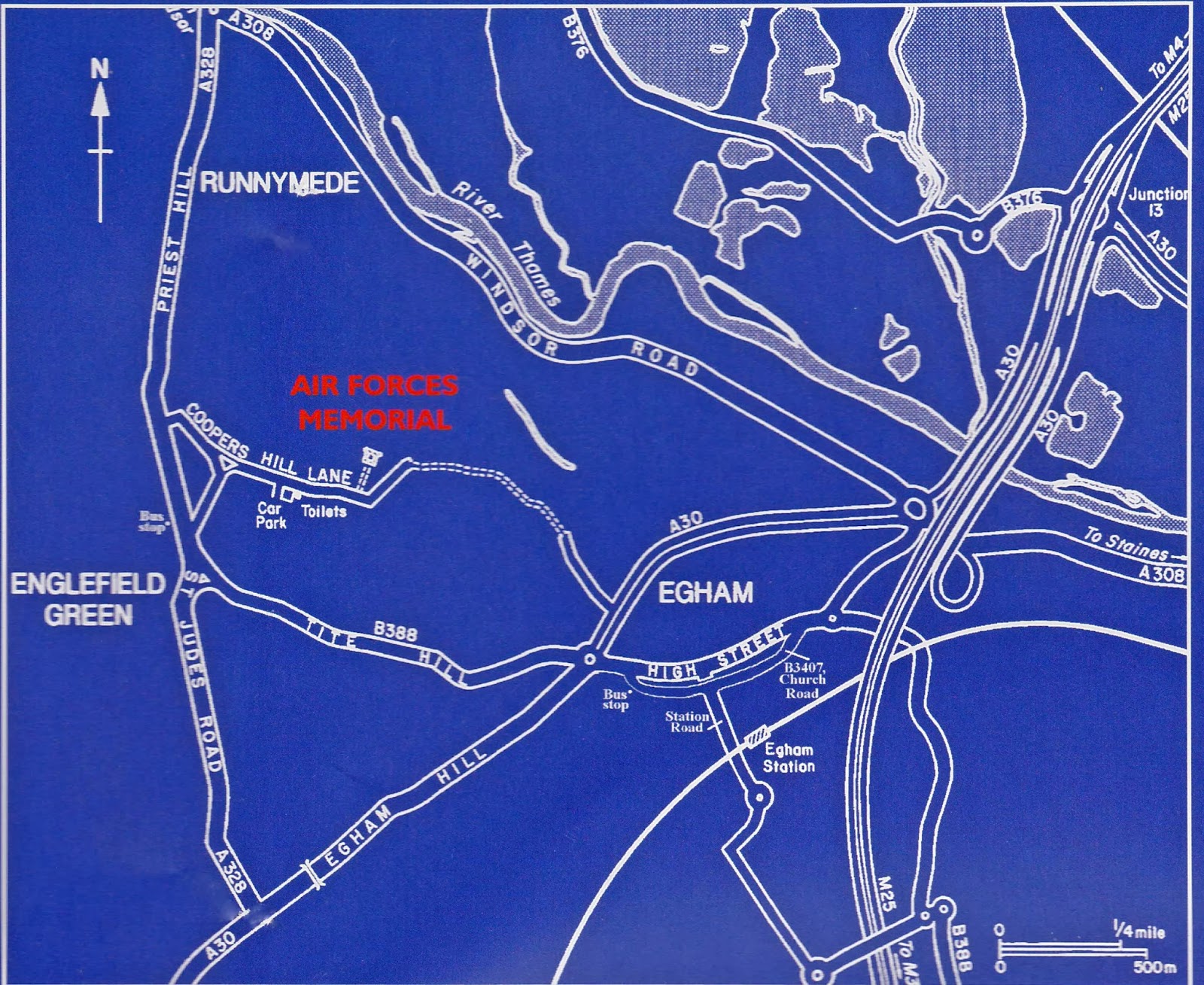 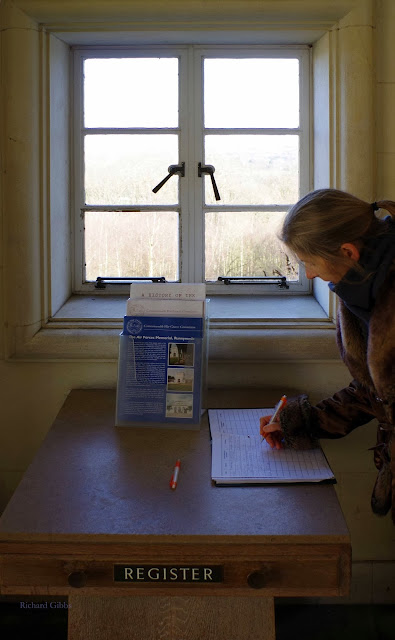