Django - The D is Silent

A conflict of interests..... 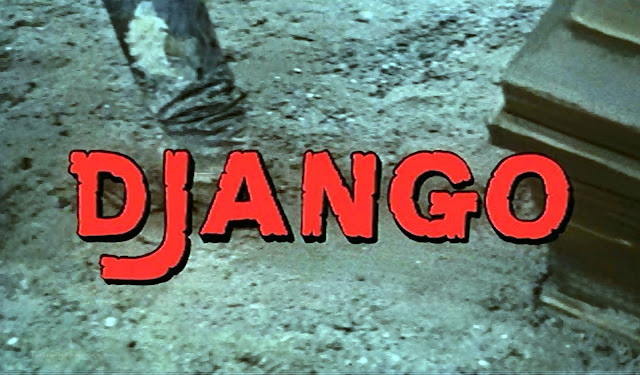 Jean "Django" Reinhardt was a Belgian guitarist of Romany descent. The nickname "Django" in Romany dialect means "I awake." At the age of 18 in Saint-Ouen, in France, Reinhardt was injured in a fire that destroyed the caravan he shared with  his first wife. He received serious burns over half his body; his right leg was paralysed and the fourth and fifth fingers of his left hand were badly burned.

His brother bought Django a new guitar and he relearned his craft and played his guitar solos with his first two fingers, using the third and fourth injured digits only for chord work.  He became one of the most famous jazz musicians of all time, but died in 1953 at the age of only 43. 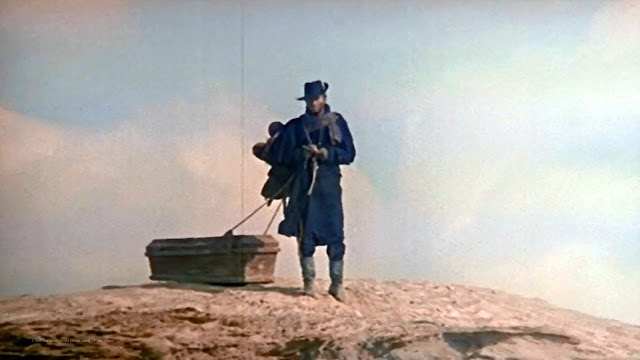 In 1966, working in Spain with Italian actor Franco Nero, Sergio Corbucci directed "Django," one of many "spaghetti westerns" that he and his friend Sergio Leone became famous for.  With his trademark handheld camera in action scenes, terse, almost cryptic, dialogue and some extreme violence, "Django" became a cult classic - refused a licence in the UK until 1993.  A particularly grisly ear-cutting being the most shocking scene.

Django is a drifter, dragging with him a coffin, and seemingly out to revenge the murder of his wife.  He becomes embroiled in conflict between Mexicans and a kind of Ku Klux Klan, partly because he rescues a young woman from a brutal flogging. 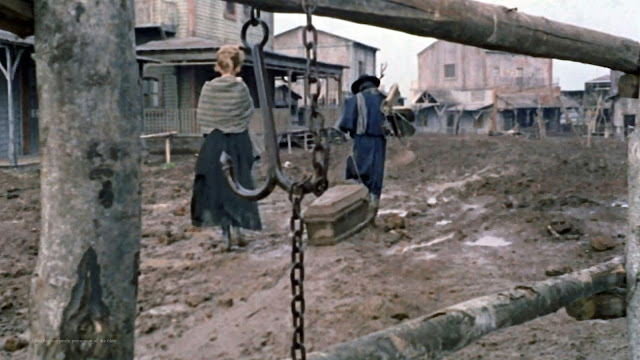 The sparkling blue eyes of Franco Nero and his speed and accuracy with his pistols give the character a charisma that almost makes a hero of him. 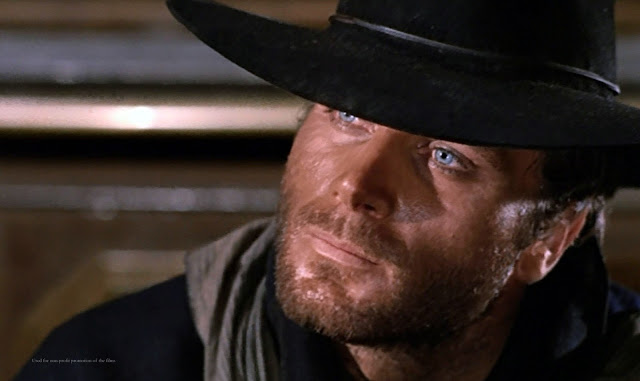 And when it is discovered that his coffin contains a Gatling Gun (a metaphor for death) he almost becomes a war hero, justifying his military overcoat and hat, as he mows down hordes of red hooded mercenaries. 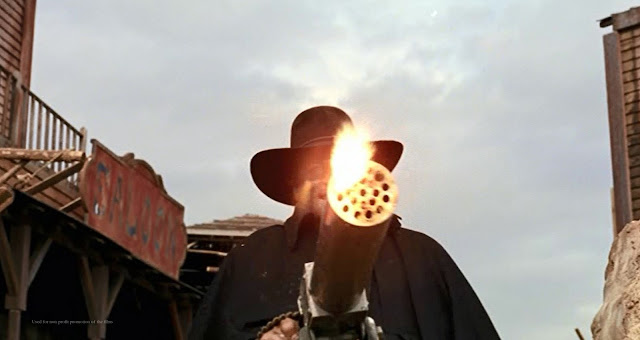 But then he falls foul of his Mexican 'friends' and his hands are maimed, first by being smashed by a rifle butt, and then by being ridden over by the bandits.  This is where the link with Django Reinhardt is established, as Franco Nero goes on to pull the ultimate trigger despite his ruined fingers. 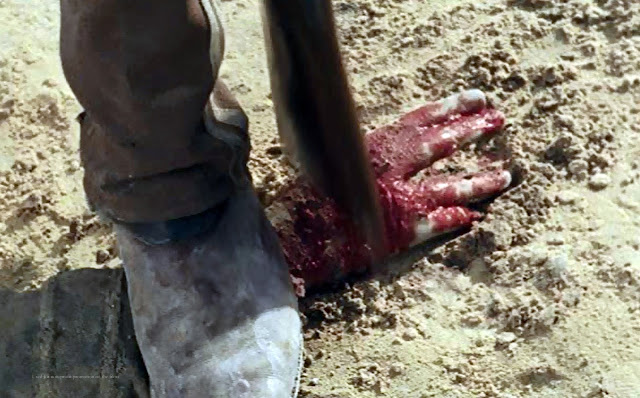 This highly successful film led to almost a hundred imitations, with about thirty using the name Django in the title.  The spaghetti western genre only lasted about ten years, though, and Corbucci turned his hand to comedies (often with Adriano Celentano) and TV before his death by heart attack in Rome in 1990.  He was 62.

Then, on Christmas day, 2012, the recording of Rocky Roberts's warm tones again gave voice to Luis Bacalov's title song, and even the title font was unchanged as 'Django' became 'unchained' in Quentin Tarantino's most recent blockbuster, grossing over $423 million worldwide, so far.

But this time Django is a slave, who has clearly been whipped across the back.  He doesn't drag a coffin, he doesn't wear military clothes, and his wife is alive.  It is 1858, in Tennessee, ten years before the Ku Klux Klan was founded (and well over a hundred before Mandingo fighting was heard of in film).  Dr. King Schultz (Christopher Waltz), a dentist and bounty hunter, frees Django because he needs him to help track down the Brittle brothers.

The film proceeds with a number of set pieces, filmed with characteristic visual flair;


certain humorous touches which would not have been out of place in "Blazing Saddles;"

energetic extremes of violence, defused perhaps by the curious dialogue;

and overloaded squibs of blood as high velocity rifles pick off their victims.

[Some coincidence perhaps?  In John Ford's "She Wore a Yellow Ribbon" John Wayne plays Sergeant Nathan Brittles.  Not the most common of names.....  But then this film displays Quentin Tarantino's geeky knowledge of Hollywood and the history of film - although that did not help him avoid the anachronistic use here of a Sharp's 1874 Buffalo rifle.]


There has been much praise, and honour, given to this film, and it has pretensions to explore the subject of slavery which Hollywood is not renowned for using as subject matter.  However, the essential attraction is in the violence, the pyrotechnics and special effects.

Practically everyone dies in the film, from Monsieur Calvin J Candie, (Leonardo di Caprio) to employees of The LeQuint Dickey Mining Co. (which include Quentin Tarantino with a strange antipodean accent). And they die spectacularly, with movement, blood spatter and streaming light.  Whether shot through the chest:

or in other regions of the corpse:

Or, as in the case of Quentin himself, as a result of wearing a corset of dynamite (which actually had not been invented in 1858).


In one sense the above image is symbolic of where we are in Quentin Tarantino's career. His successes (and failures) have been roller coaster rides of sharp dialogue and death by violent acts, but he has perhaps careered from enfant terrible to a bloated Mr Creosote (from Monty Python's "The Meaning of Life") who has grown up on a diet of cinema, and who has become morbidly obese on cinematic trivia.  The brilliant wafer thin mint of Corbucci's "Django" is the trigger that causes this catastrophic explosion. There really is nowhere else to go.

Within Tarantino's film Franco Nero plays a cameo part (Amerigo Vessepi - or Vassepi) who is an Italian slave owner. He encounters the unchained Django (Django Freeman) at the bar (the original Django wearing white gloves nb) and asks him to spell his name.


Franco Nero's response to this information is, "I know."  It seems perhaps that this knowing is a feature of Tarantino's world.

The controversies surrounding this film may bring with them more spectators, but they may also distract the viewer from its strengths.  It is spectacular.  It is a film (and not a history lesson).  But it is also over-long, and the plot lacks convincing coherence when all is said and done.  It may be that the death of Tarantino's former editor, Sally Menke, in 2010, meant that some of the crisp focus and slickness of earlier films is missing, but it may also be that Tarantino's stature as Superstar has led to his being too "knowing" and that others are unable to offer criticism?

However, Tarantino himself may be aware that his time at the top will be limited.  As he himself said in a Playboy interview:

“I just don’t want to be an old-man filmmaker. I want to stop at a certain point. Directors don’t get better as they get older. Usually the worst films in their filmography are those last four at the end. I am all about my filmography, and one bad film f—s up three good ones…But if I stop at 10, that would be okay as an artistic statement.”

I suppose he must have been thinking of Sergio Corbucci? 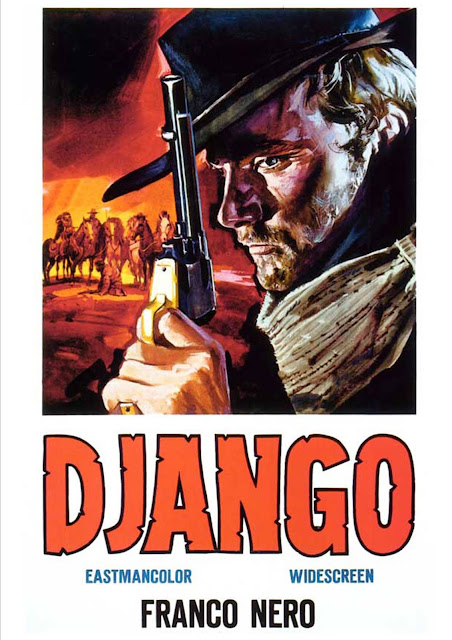