away from it all? 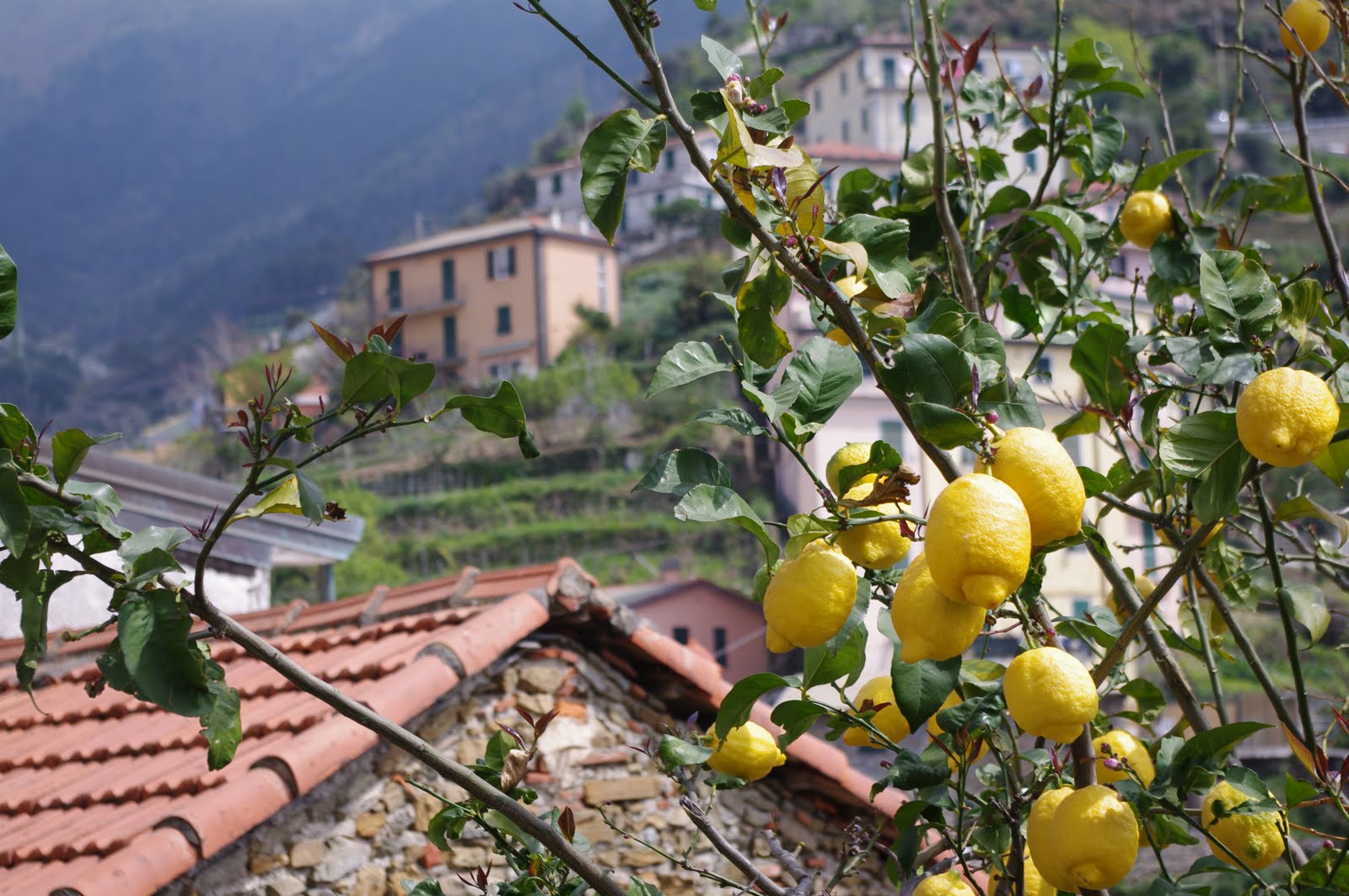 Le Cinque Terre is a rugged stretch of coast on the Italian Riviera, in Liguria, slightly to the west of La Spezia. There are, not surprisingly, five villages: Monterosso al Mare, Vernazza, Corniglia, Manarola, and Riomaggiore. The coastline, these five villages, and the surrounding hillsides are all part of the Cinque Terre National Park as well as being one of the UNESCO World Heritage Sites. Each of these sites (and in 2011 there are 936 of them: 725 cultural, 183 natural, and 28 mixed properties, in 153 different states) is a place (such as a forest, mountain, lake, desert, monument, building, complex, or city) that is listed by UNESCO as of special cultural or physical significance to the common heritage of humanity. 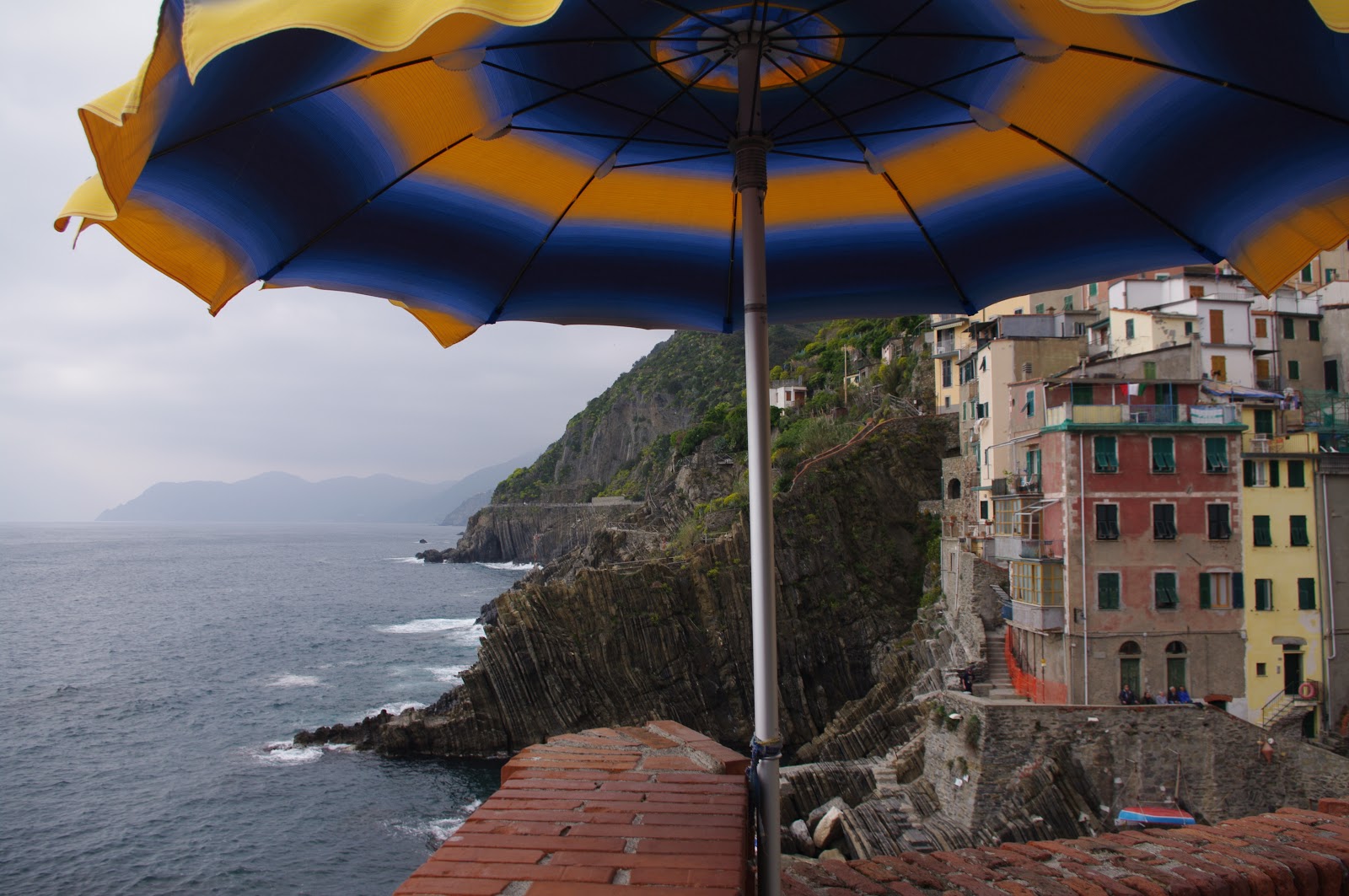 In some ways being designated a World Heritage Site could be seen as a mixed blessing.  The City of , for instance, was designated one in 1987, and now the queues to see the Roman Baths wind round the block, and Jane Austen and Fanny Burney must be turning in their graves in reaction to the busloads of trippers who wouldn’t know which way up to put a lace doily….  And on Dorset’s (World Heritage Site since 2001) it is very very hard to get a drink in the “Square and Compass” (http://squareandcompasspub.co.uk/) at Worth Matravers without jostling with multiple families weighed down with casts of trilobites and bags of fossils. 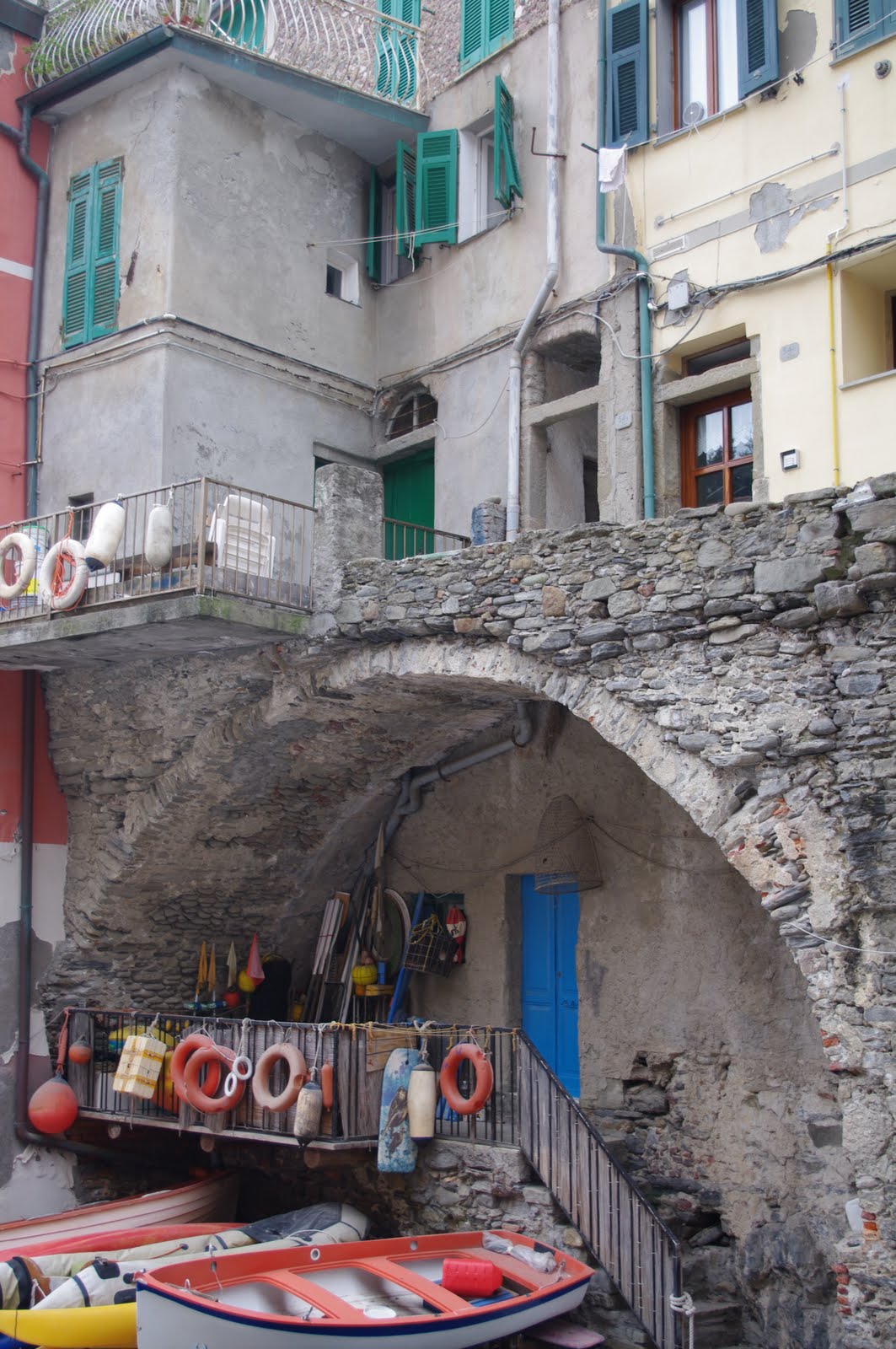 In Italy there are 48 sites currently on the list (which is the highest concentration in the world); not surprisingly these include the Historic Centres of Rome (1980), Florence (1982) and Siena (1995), the city of Venice (1987), the Piazza del Duomo in Pisa (1987, 2007), the Trulli of Alberobello (1996) and the Archaeological Areas of Pompeii, Herculaneum and Torre Annunziata (1997). And, since 1999, at the 21st session of the UNESCO World Heritage Committee, as well, Le Cinque Terre (together with Portovenere and the Islands of Palmaria, Tino and Tinetto) have been blessed (or cursed) with the designation. 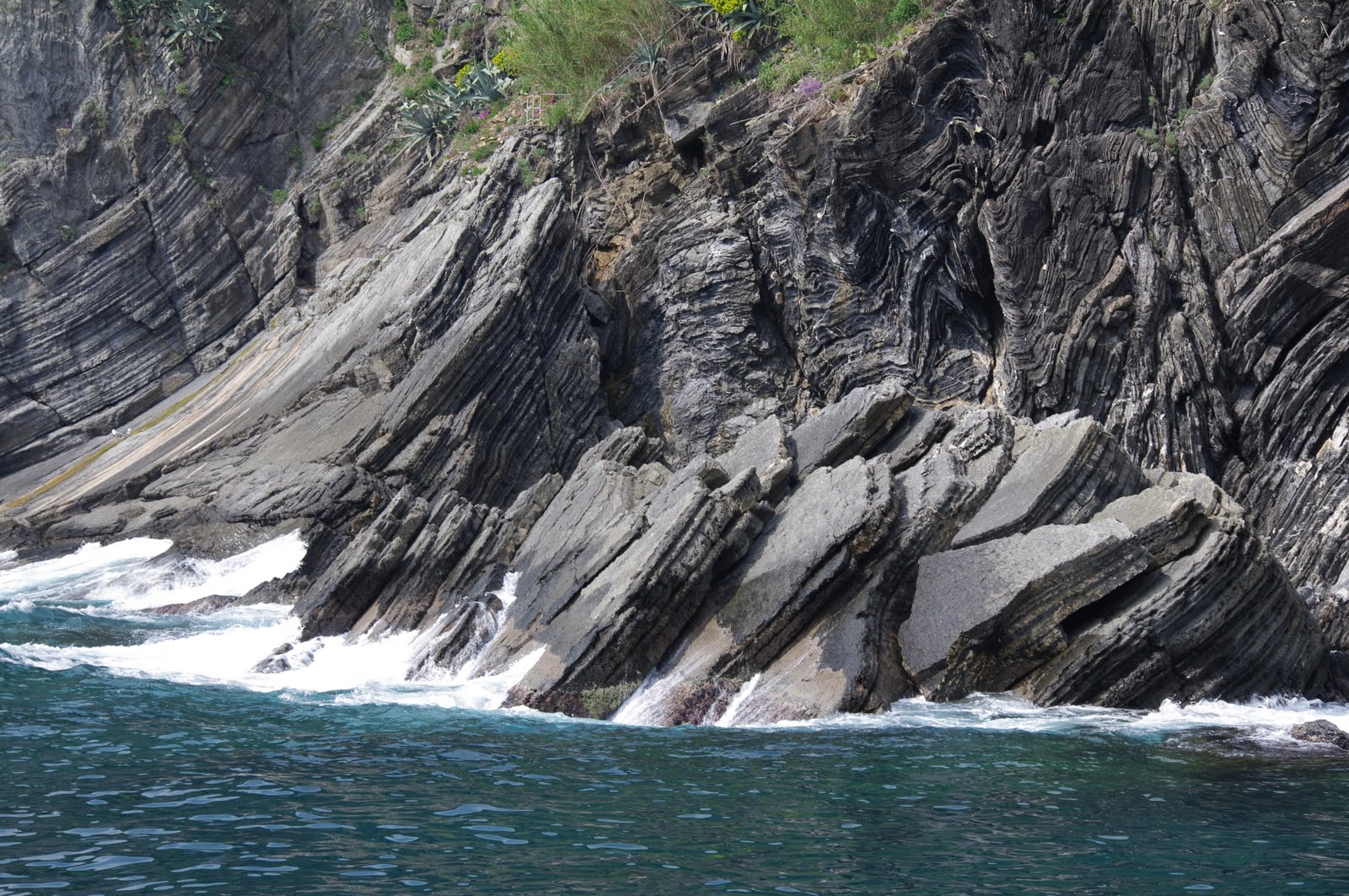 Now I might be something of a sceptic here, although I am not casting aspersions at the collective wisdom of the members of the world heritage committee.  Let’s be frank – Le Cinque Terre is a beautiful area and the five separate villages, perched crazily as they are above the jagged shores, tumbling colourfully down the slopes from terraced hillsides fragrant with wild flowers to kiss the sea in all weathers – are like bright jewels in a fantastic natural crown of striated rock.  Let’s be frank – other areas such as this have been subjected to being cast into concrete shrouds and private projects which have all but destroyed any sense of heritage.  Let’s be frank – without some efforts to preserve customs, practices, wild-life, vegetation, indigenous architecture, the world and all its billions of inhabitants would be the poorer.  But also, to be frank, perhaps there should be a more discreet way of doing it? 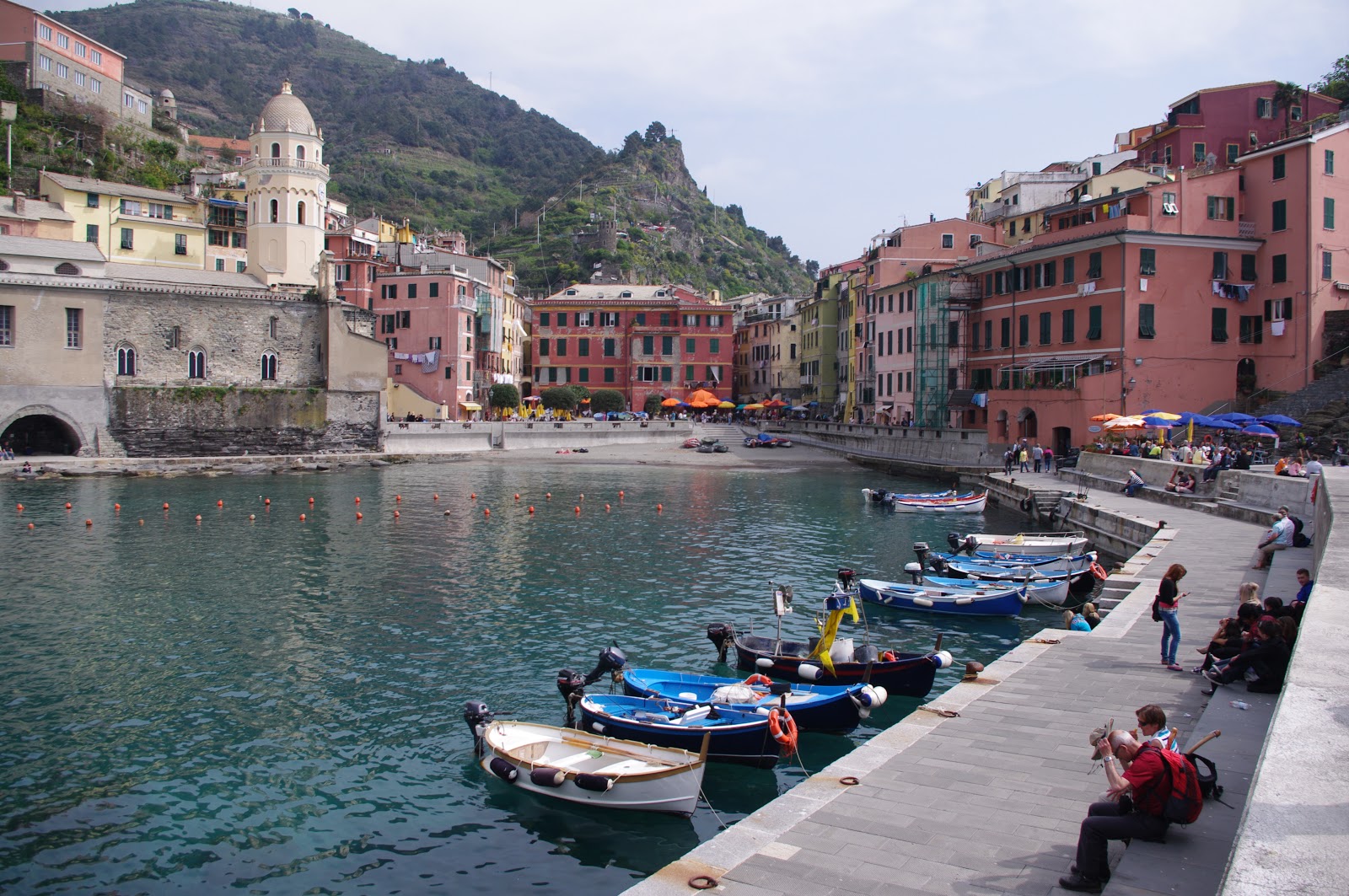 To quote Wikipedia: “Over centuries, people have carefully built terraces on the rugged, steep landscape right up to the cliffs that overlook the sea. Part of its charm is the lack of visible corporate development. Paths, trains and boats connect the villages, and cars cannot reach them from the outside. The Cinque Terre is a very popular tourist destination…..” What is the key to this? Lack of visible corporate development? – I hardly think so! Much of Italy clearly displays a lack of corporate development, albeit mainly in the twentieth century, and this is hardly to be celebrated. Cars cannot reach them from outside? – now that may hold a clue. In fact there are roads and streets and vehicles do come and go, but these are either those who live there (who have to park on the periphery of their respective village) or delivery or service vehicles, without which the bars and restaurants in particular would rapidly cease to function. But the average visitor has to take the train, and this is perhaps where Le Cinque Terre do hit the spot. 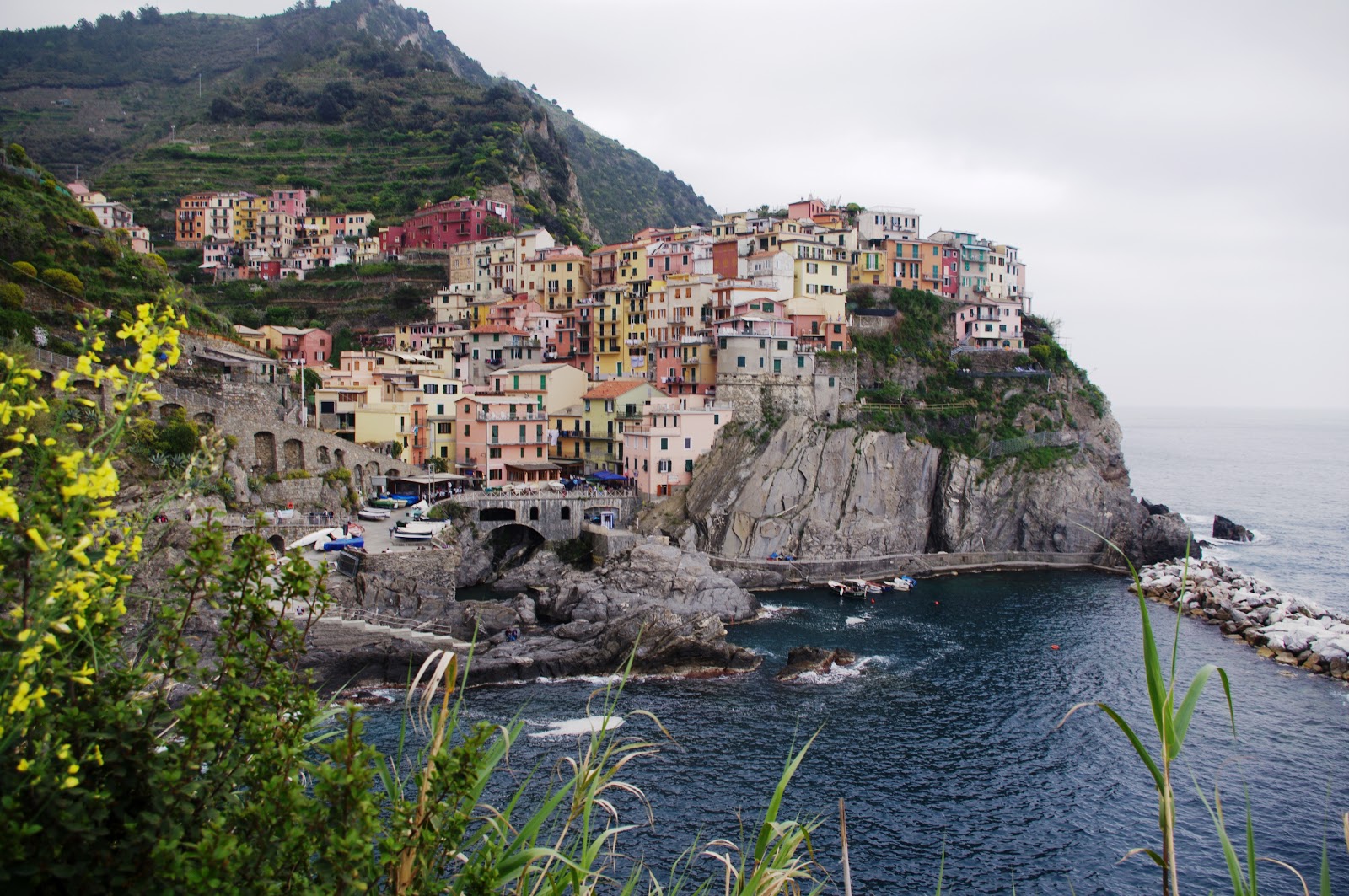 On a recent visit to the area I couldn’t help but notice a good-humoured group of Americans, who were being teased by a trio of ever-so-slightly uncouth southern Italian youths.  We were all travelling north on a train from Pisa and this diverse group of travellers clearly had not been long in Italy but were infused with a sense of direction.  At La Spezia  (“Is this La Speeschia?” they enquired) we disembarked and made our way to the office dedicated solely to Le Cinque Terre, where train tickets or passes the trains and the walking routes for one or two days need to be purchased.  This office tends to be busy, but it is well stocked with information and the multi-lingual assistants are helpful and efficient.  My American friends duly acquired their passes and we all headed for the next train to Riomaggiore and beyond.  And these Americans, informed and prepared by World Heritage advertising, disappeared off to explore this world of “unspoiled” villages and nature.  And this is where it becomes an extraordinary success story, which presumably is an outstanding example of corporate development, for the trains from La Spezia tunnel their way through Le Cinque Terre on a frequent and precise timetable, stopping at each of the five villages on their way to Genova and back, thus connecting these remote and “inaccessible” villages with the cities and airports of Rome, Milan and everywhere else.  And they are not just dinky little tourist shuttle services either; you are looking at full scale, double-decker (again a mark of the corporate development of the Ferrovie dello Stato Italiano – would that the British railway barons had thought to make their tunnels tall enough for double-decker trains!) full length electric trains. And they are full! 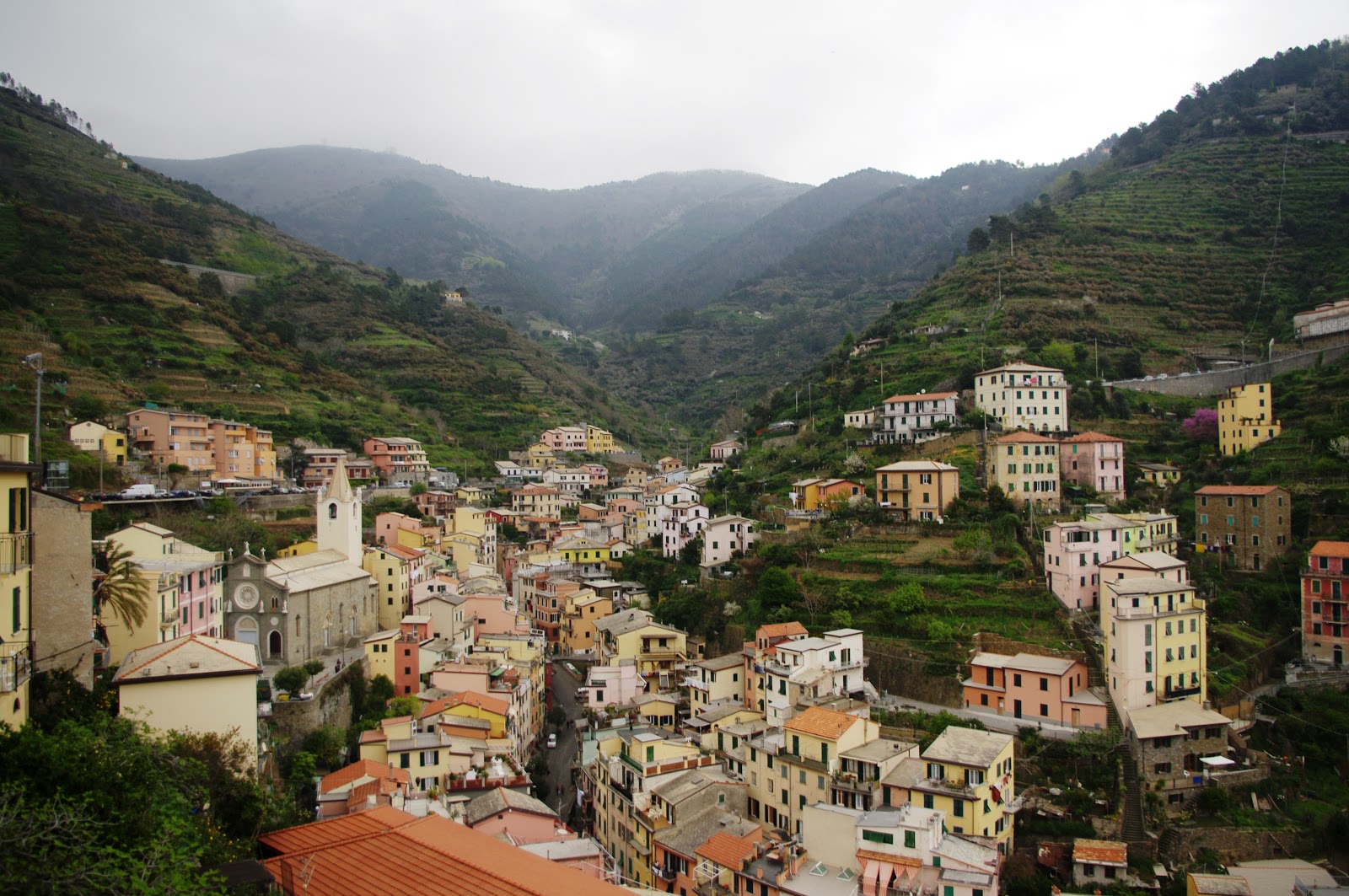 At the height of the season, for most of each day, these trains are embarking and disembarking literally thousands of tourists at every stop.  The Carabinieri are out in force to ensure a reasonable flow of pedestrians up and down each narrow main street and, although we are talking about decent, well-behaved World Heritage Tourists here and it’s not marked by street gangs or family beach parties, the throngs of international visitors can be oppressive.  Think the Palio in .  Think a slow motion bull run in .  Think of underground trains in the rush hour! 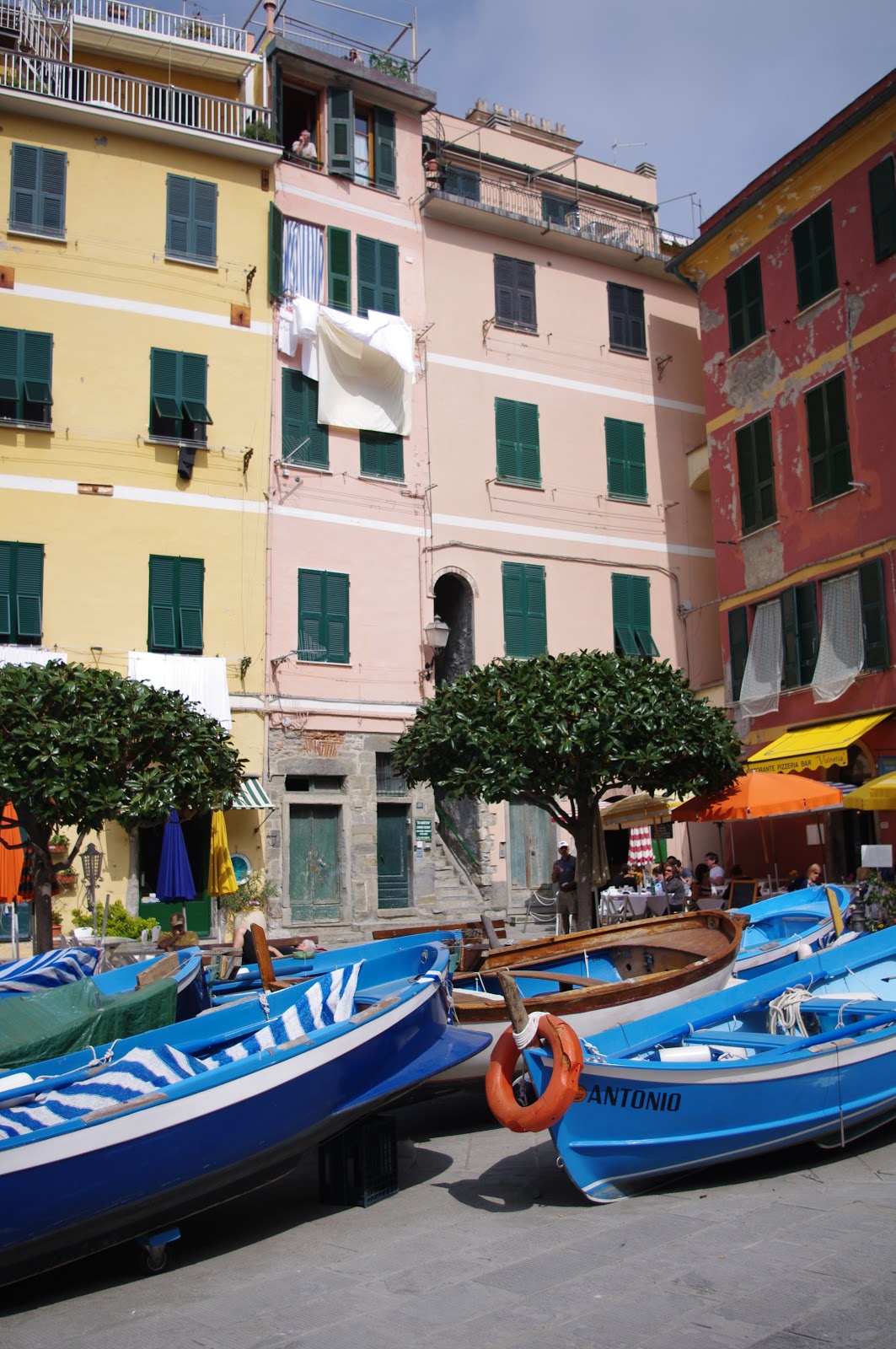 And why are they here?  Well again, to tinge this with cynicism, they are celebrating a world without cars.  Seriously, this is one of the defining features.  Yes, there are many other attractive aspects, such as the exquisite natural landscape, the beautiful light on the sea as it sparkles at the feet of the cliffs, the trails that wind steeply up and down terraced hillsides, through olive groves and vineyards; and the delicious foods and wines, much of which is somehow local, but one of the unconscious desires the holiday maker seems to yearn for is to get away from the tyranny of the car, and where better to do this than in tiny, old-fashioned villages by the sea? 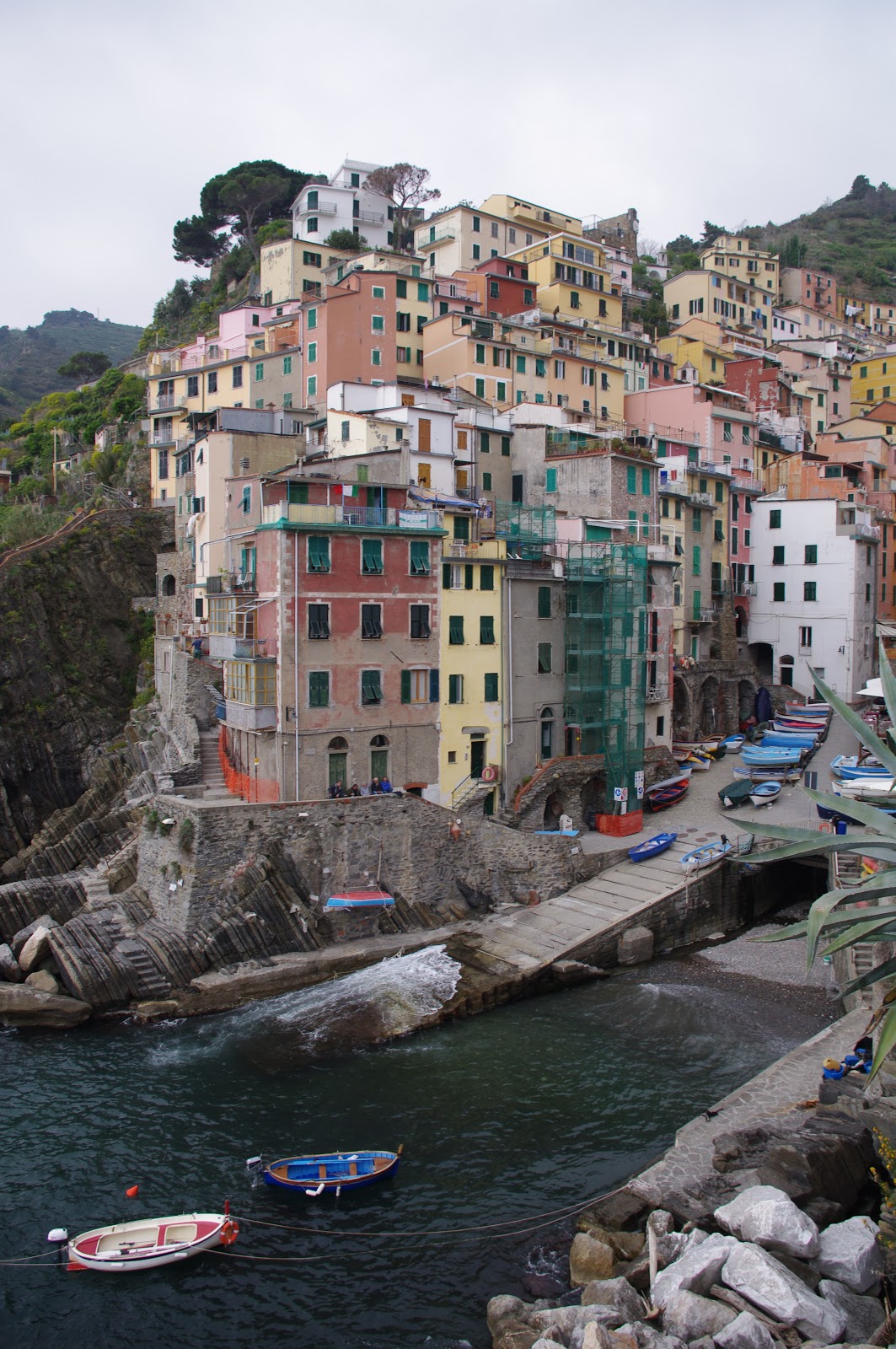 There are other places in the world that kind of support this idea.  The cobbled, traffic-free, high street of the fishing village of Clovelly in North Devon, built into a cleft in a 130 metre high cliff, tumbles its way down past whitewashed and flower bedecked cottages to a tiny working port, and is the nearest thing we have to Le Cinque Terre in the UK (though perhaps PortMeirion might argue with this…)  The traffic free marvel that is Venice is a mecca for autophobes; we’ve already alluded to the Campo Santo of Pisa and the heart of Siena.  But imagine Trafalgar Square without the snarl and stampede of traffic.  Imagine your home town without cars.  We are so inured (and beholden) to our private means of transport that when UNESCO decrees that a place is beautiful because it is not accessible by car, we flock there in wonder and don’t even dream that it could happen elsewhere. 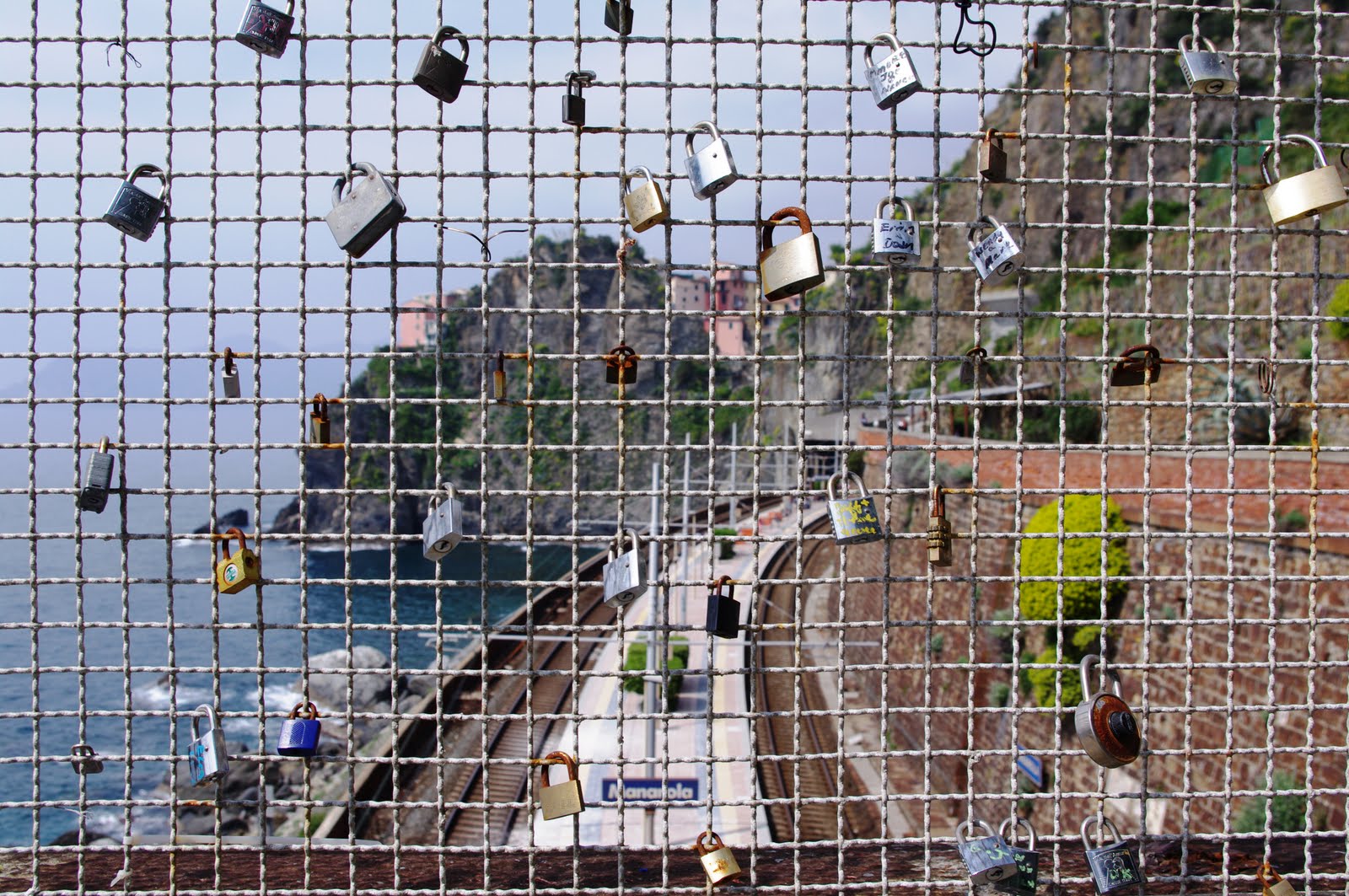 But, back to Le Cinque Terre.  On this occasion we stayed at the Locanda Ca Dei Duxi in Riomaggiore, nestled into the walls of an ancient house just like the sparrows I observed in the nearby church walls – precarious, but safe and snug, each in their individual space.  We had Cinque Terre Cards, which allowed us to walk on the Via dell’Amore (characteristically decorated with padlocks representing undying love) and, had it not been closed due to landslips, the Sentiero Azzurro ("Light Blue Trail") which connects all five villages (Riomaggiore, Monterosso al Mare, Vernazza, Corniglia and Manarola).  This is twelve kilometres long, and has a vertical shift of five hundred metres. And we treated ourselves to dinner at the Ristorante Ripa Del Sole, which is run with passion and care by Daniela Bertola, her brother Matteo and his wife Tatiana.  From their dining room the views of the sunset over the castle ruins are superb, and with almost everything, from the fish to the wine being locally produced, you could almost taste the lack of cars!  Among many delicacies we had anchovies in five different ways and trofie al pesto, and finished off with glasses of the legendary “Schiacchetra” – the vino passito of Le Cinque Terre (made from a combination of Bosco, Albarola, and Vermentino grapes but those that have been allowed to sweeten on the vine). 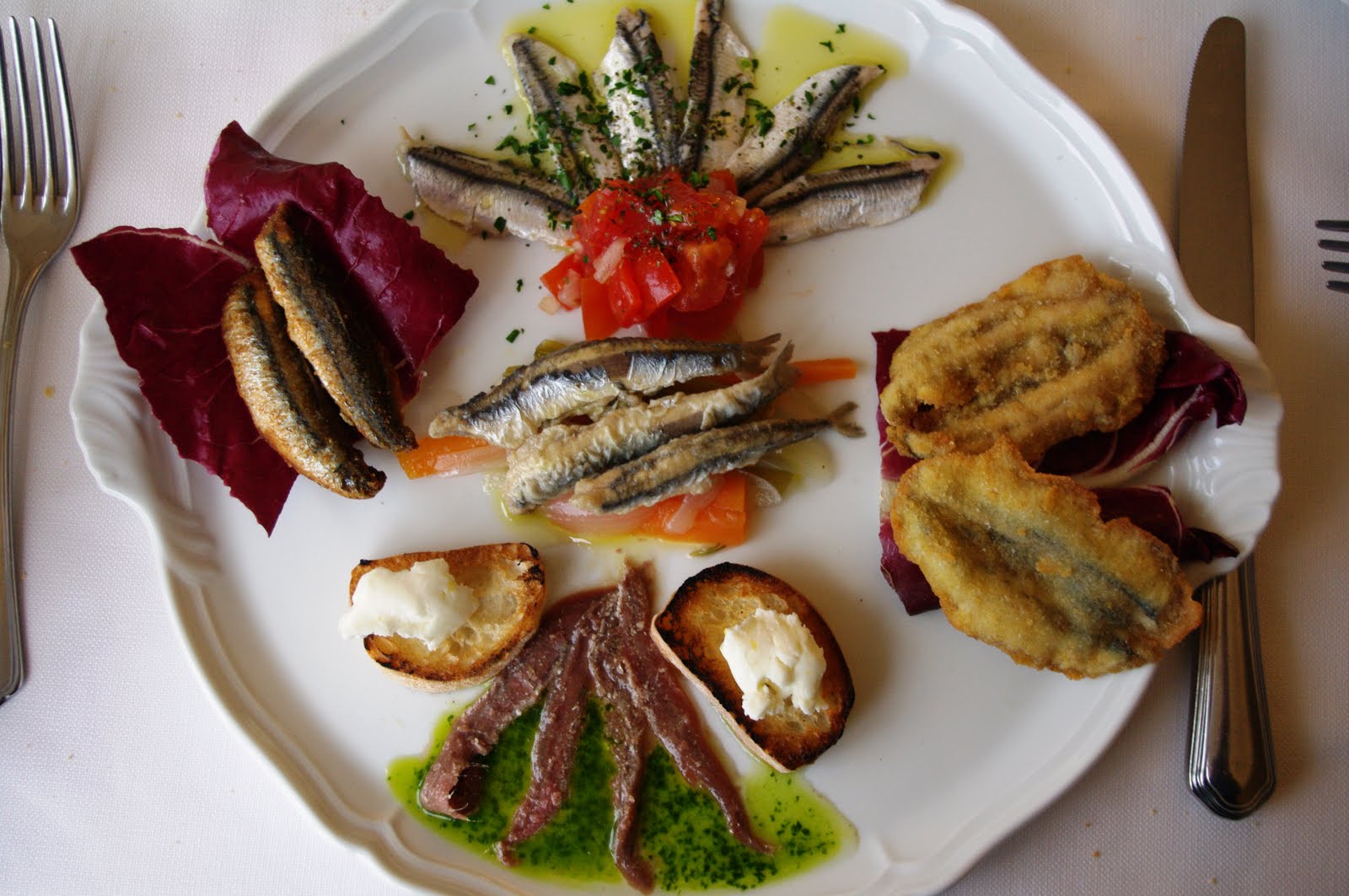 Before we left, to return to the world of cars, our host recommended returning in the late autumn or even winter.  It is quieter then, and, with the sea to warm the air, the climate is mild when other parts of may be snowbound or bitterly cold with mountain air.  The train duly picked us up at Riomaggiore, within sight of the blue sea, and then, a short tunnel or two later, it dropped us back in the hustle and bustle of , with its pleasures of concrete and cars. 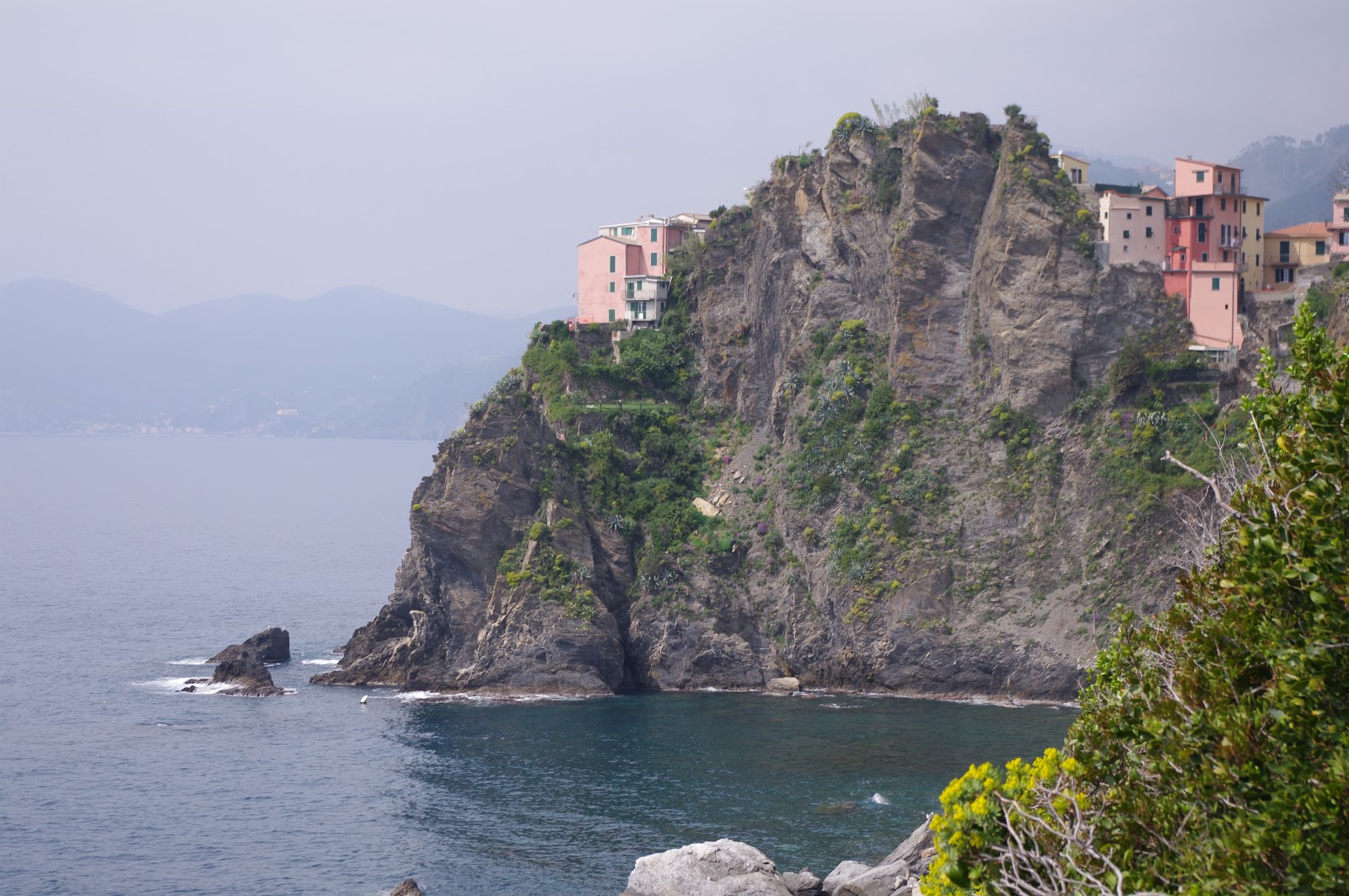 We should be grateful that in 1998 the Italian Ministry for the Environment set up the Protected natural marine area and that in 1999 the Parco Nazionale delle Cinque Terre was set up to conserve the ecological balance, protect the landscape.  And we should be grateful for World Monuments Watch and the World Monuments Fund which study and support the management of the conservation of the area.  And finally we should be grateful to UNESCO for their designation as a world heritage site, for, despite the way this has led to the invasion of tourism, at the least this fuels the local economy and helps with the preservation.  And, perhaps, with the lessons learned from the attraction of this area, we may find the thrill of car-free villages and “a lack of visible corporate development” catch on and even become the norm, rather than the exception.