The silence of the Wolves 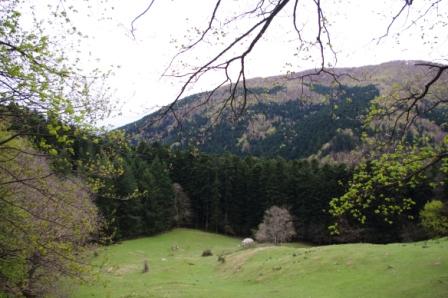 Spring comes late to Camaldoli.  At 1104 metres above sea level, immersed in thick forest and cloaked in deep silence this hermitage is chilly despite the sunshine.  We have travelled from the Ligurian coast, where hottentot figs flower and bougainvillea thrives; through Florence where the fresh green of the Boboli gardens sets off the massed violet racemes of the wisteria to perfection, and up the winding roads from Poppi, where vines and olives give way to chestnut trees, beeches, oaks and then pines.

There is much to explore in these forested hills, known as “Il Casentino.”  It is an area of some 800 square kilometres, with its highest point at Monte Falco which reaches 1658 metres above sea level.  The river Arno, which is the fourth largest river in , rises at 1358 metres on Monte Falterona before coursing to the sea through and .  There is a wealth of history here, too, including the celebrated battle of Campaldino (near Poppi) in which some 11,000 Florentines – including a youthful Dante Aligheri – trounced a similar number of Aretines on June 11th 1289. In 1224, Saint Francis of received the stigmata at La Verna (1129 metres) and in 1051 Saint Giovanni Gualberto founded the monastery of Vallombrosa (958 metres).

The National Park of Monte Falterona, Campigna and the Casentino Forest is approximately 70 kms east of Florence, which puts it pretty much at the heart of Italy, midway between the Tyrrhenian and the Adriatic seas, and it was here, almost exactly 1000 years ago, that Count Maldolo d’Arezzo gave the ruined castle of Fontebuona and a parcel of land to a young monk by the name of Romualdo.  Saint Romuald, as he was to become, was born at in about 950, and is said to have fled the world after witnessing his father killing a relative during a dispute about property.  After some time in at San Miniato, he founded the Benedictine community of Camaldoli (taking the name from his benefactor), which, despite reconstructions over the centuries, survives with two impressive complexes of buildings here as well as having the monastery of San Gregorio al Celio in . Camaldoli is also the mother house for several male communities in as well as the , and as well as being the inspiration and spiritual reference point for a number of female monastic communities in these countries and others. 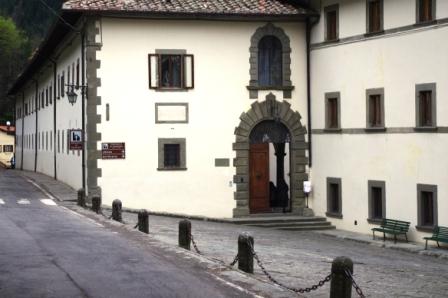 The main monastery buildings are in a narrow gorge at 816 metres.  Originally this consisted of accommodation for a few monks and visitors, but it was enlarged to create capacity for one hundred, and this included a water mill, a pharmacy, and, at its peak in 1520, a printing press which produced the “Costituzione Camaldolesi” containing rules for, amongst other things, the planting and conservation of fir trees.  Nowadays the grand, but irregular, building contains a monastery, a baroque church with decorations by Vasari, the Foresteria (or guest rooms, now called the Hospitium Camalduli where groups of visitors may stay in retreat), an infirmary for the care of elderly monks, a refectory with a beautiful inlaid wooden ceiling, cloisters, courtyards, an important library, the ancient pharmacy complete with antique jars and a stuffed crocodile, and a modern gift shop, selling herbal remedies, honey and religious items. 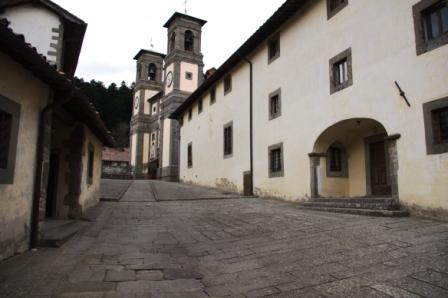 Legend has it that Romuald quickly found his peace disturbed by followers and well-meaning but over-enthusiastic visitors and so moved, in 1012, 2.5 kilometers up the road (and nearly 300 metres higher) to settle into the deepest silence amongst the rocks and the firs and larches.  He built five cells and a little oratory.  The first church here, dedicated to Christ the Saviour, was consecrated in the year Romuald died, 1027, but this was enlarged and rebuilt several times before being destroyed by fire in 1693.  The present church is baroque, with an elegant façade and two bell towers.  The decorations inside include a marble bas-relief of the Madonna and child by Tommaso Fiamberti and a glazed terracotta of the Madonna and child with saints in the style of Andrea della Robbia. 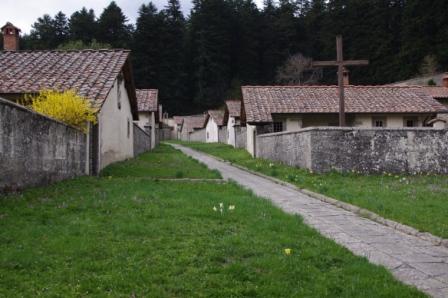 Beyond the church, secure behind an iron fence, there are twenty cottages, in five rows.  These are the hermits’ cells, self-contained units complete with walled gardens for the cultivation of vegetables and herbs.  The only sign of occupation is the trickle of woodsmoke from a chimney – here silence is the rule.  Although there is a refectory adjoining the church, it is only used by the community for meals together twelve times a year, and even then the rule of silence is observed. 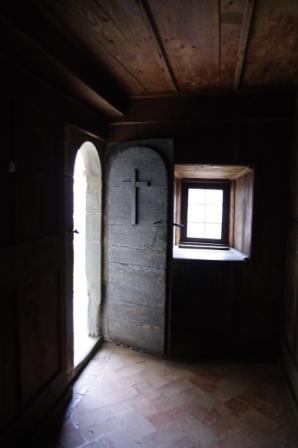 Although several of the cells have been occupied by notable visitors, including one constructed by Pope Leo X in 1523 in penitence for the fact that Princess Maria Medici had visited the hermitage dressed as a man, and they date from different periods, they are all similar in their austere plan.  Just opposite the church, and part of the larger buildings, is the cell of Saint Romuald himself, and this was visited by Pope John Paul II in 1993. The cell remains as if Saint Romuald had just slipped out to church – spare, functional, deep, dark and strangely comfortable.  Outside a small garden, supervised by a sprightly redstart (in complete disregard of the rule of silence) would have provided herbs and vegetables.  Inside, a corridor leads to the main room, with a fireplace, desk and box bed, off which there is a tiny oratory and an even tinier closet.  And that is it.  For a thousand years now a community of no more than twenty men has lived here, never speaking, dedicating themselves to the Benedictine principle of ora et labora (prayer and work). 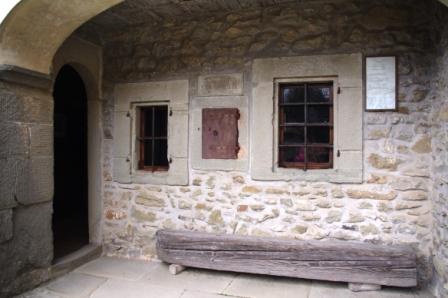 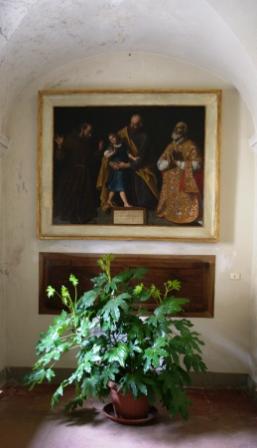 The work activities will vary, but they include, certainly for those in the main monastery, the necessary routines of life in a community, such as laundry, cleaning, preparing food, gardening and gathering fuel.  These monks also help care for the hermits, and of course the younger brethren need to help care for the older.  The emblem of the Camaldoli community is of two doves drinking from the same chalice, which symbolises communion within diversity, nourished by a relationship with God.  The hermits spend time in mediation on the words of the bible, and in the study of other religions with a view to forming bridges between eastern and western monastic traditions, developing, despite their silence, ecumenical and inter-religious dialogue. 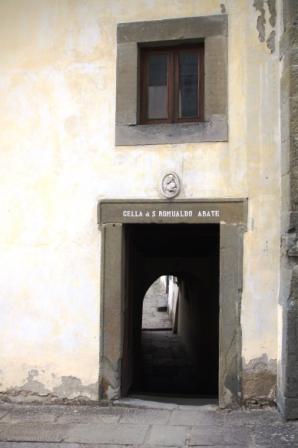 The seasons come and go, but in the silence of the forest little has changed.  There are still wolves and eagles in these mountains, and in winter the hermitage can be completely cut off by snow.  In summer it may be besieged by Florentines and Aretines fighting for a share of the peace and freschezza at this altitude, but the rule of silence prevails and the hermits proceed with their dedication and self-discipline, whatever else may be happening in the world.  Tsunami, rebellion, Bunga-Bunga – it makes no difference.  Sealed in their silent cells, the inhabitants of the Sacred Hermitage of Camaldoli live as examples of religious order, removed from the jealousies and competitions of the material world.  It is not (perhaps) important whether they are Camaldolese, Catholic, or Christian – it is important that it is possible to live such a life, and that it can be good to live without double-glazing or central heating, supermarkets or internet shopping, imported goods or ice-cream.  Fashions do not need to change; life alone does not need to be sad, or unprofitable. 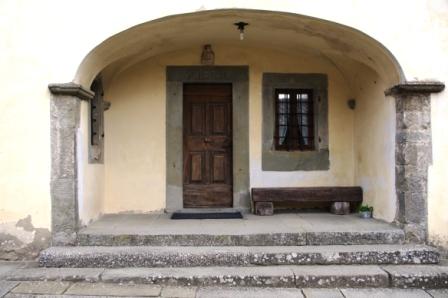 Viewed from a different, more cynical, point of view, it could be argued that a number of reclusive men living in tiny cottages at the top of an Italian mountain offer little to malnourished millions around the world, but this was never the point.  As we leave the courtyard, we step into the little shop and bar that nestles in the wall of the compound.  Apart from the books and icons, honeys and tisanes on offer there are a number of CDs of sacred music and also DVDs on sale.  I browse through the titles: Liliana Calvani’s Francesco, a curious role for a troubled Mickey Rourke: Philip Groning’s fine visual examination of La Grande Chartreuse in Into Great Silence; Francesco Rosi’s Christ Stopped at Eboli, not exactly a study of religious seclusion though a marvellous film. Then, curiously, I find several copies of Clint Eastwood’s Gran Torino.  What was this doing here?  Could the man with no name be a metaphor for the life of a hermit?  Eastwood’s taciturn characters are invariably widowed, divorced, separated or otherwise unattached – and he generally has a mission, or calling, but this film does not immediately seem to fit. However, as the eminent film critic Philip French pointed out in his review, what gives the film its formidable strength is the way Eastwood shows [the hero] struggling with his prejudices and coming to terms with a changing world and with his inner demons.  There is an enigma here, perhaps not dissimilar to the riddle about out of the strong came forth sweetness; perhaps the men who inhabit the silence in these forested mountains are not so silent after all.