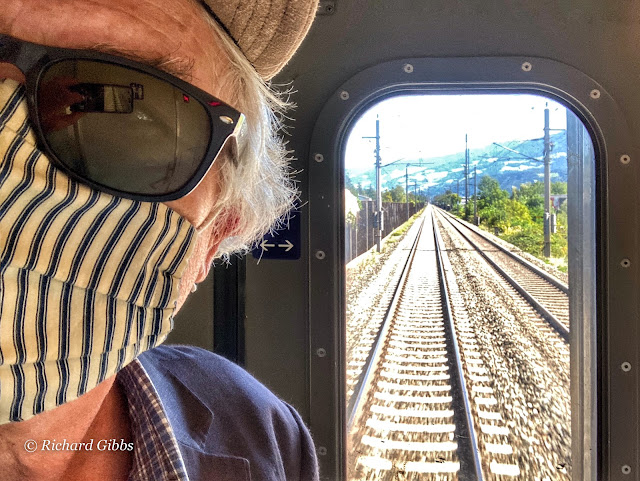 After three weeks and three thousand miles, mainly on trains, I am home.  The cats mew welcomes and I drop my bag, exhausted.  I think this may have been the longest separation from Amanda in forty years and I am looking forward to collecting her from Respite in the morning, but first I must burn some heating (the house is cold! - but can we afford it?)  I am cold.  And tired, and need to lie down..... 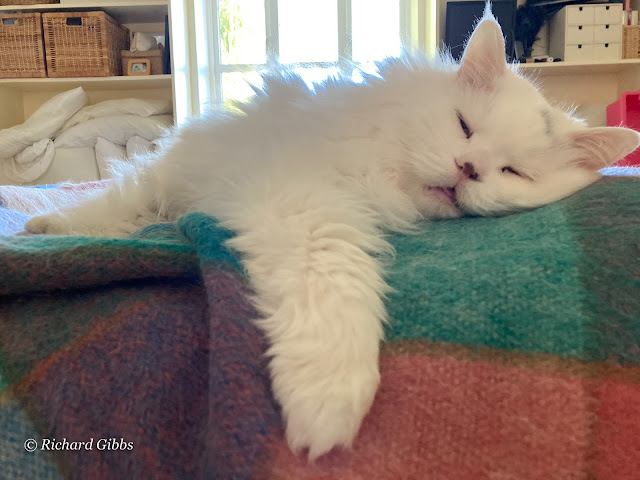 Three-thirty in the morning and I cough myself awake, unable to sleep again, not feeling good.  Seven-thirty and two thin red lines stare back at me from their plastic frame.  After three years and three vaccinations, and despite wearing a mask for three thousand miles, finally the bug has got me.  Plans change.  I cannot pick Amanda up. 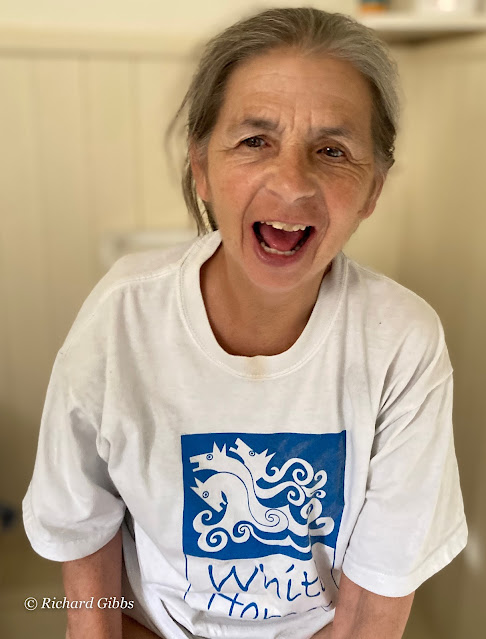 Time for reflection.  The point of this break was in part for me to recharge my batteries, to allow me to prolong my care for Amanda at home.  In part, however, it was to see how she got on in the local care home, conveniently nearby.  I had planned to bring her home for a few days to see how she was with me, then to take her back for the weekend while I collected my thoughts and then to make a final decision on the Monday following my return. 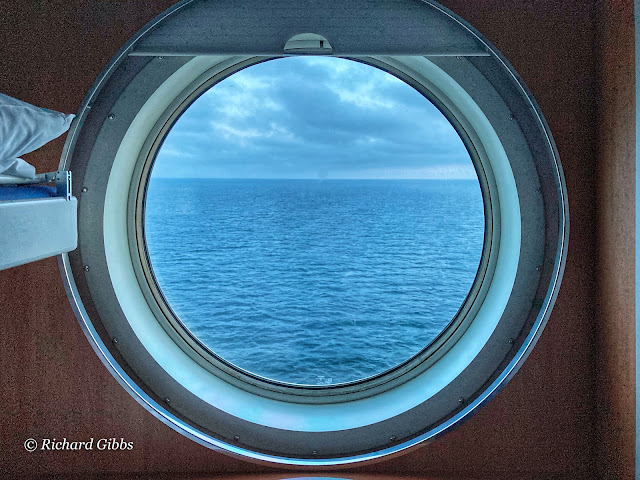 For anyone caring for someone, there are many things to consider, the first of which is to allow the cared for to remain safe in his or her decline.  A secondary consideration, however, concerns the carer.  For example, if I, or one of the dedicated carers who have been helping Amanda at home, were to become ill or incapacitated, then the situation would rapidly become problematic.  Whereas if she takes up residence in a care home, there is 24-hour assistance, and, while no one can pretend it will be as “nice” for her as being in her own home, if we are nearby and can visit, take her out or bring her home regularly, then maybe everyone benefits. 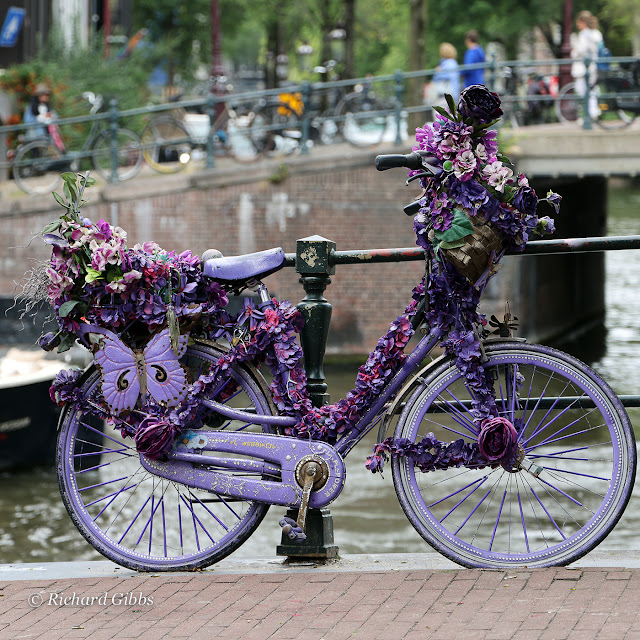 For readers unfamiliar with this story, Amanda was diagnosed with dementia about eleven years ago (to be honest, it’s a blur now and I cannot remember quite how long ago it was, it may have been longer). Initially we were told that it was early onset Alzheimer’s disease, but I contested this and after brain scans and extensive testing it was agreed that the correct diagnosis was Frontotemporal Dementia (Semantic Variant) a relatively rare (and long-lived) condition.  In practical terms this doesn’t make a huge difference – no dementia can currently be cured, and all converge eventually in some kind of death – but in Amanda’s case it has meant that while she hasn’t had some of the symptoms that can be so distressing in dementia – such as extreme behaviours, anxiety, disconcertingly repetitive actions – she has now lost almost every shred of language, both in her understanding and in her ability to communicate. 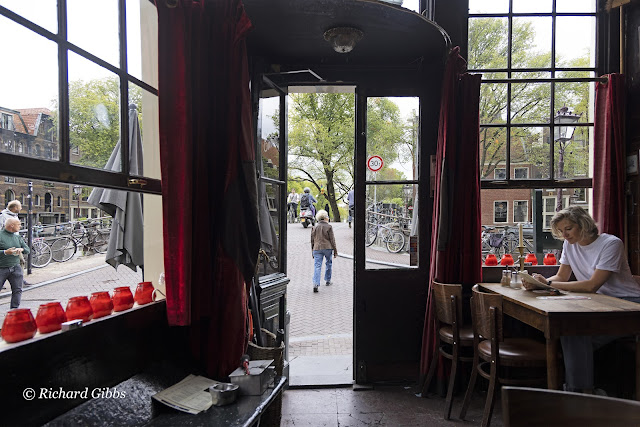 She continued working, and driving, for some time, and apart from struggling to find the right word at times you might not have known she was affected.  It is a slow, silent, stealthy insurrection however, and day by day plaques, abnormal clusters of protein fragments, build up between nerve cells, then dead and dying nerve cells contain tangles, which are made up of twisted strands of protein.  Nutrients and other essential supplies can no longer move through the cells, which eventually die; the brain shrinks dramatically and the effects become more noticeable.

We continued to travel, though our trip to Bologna and Ravenna in 2015 was a milestone as I had an epiphany at the Easter Vigil in the Metropolitan cathedral as the Paschal Candle was lit to the singing of the Exultet:

Accept this Easter candle,
a flame divided but undimmed,
a pillar of fire that glows to the honour of God.
(For it is fed by the holy melting wax, which the mother bee brought forth
to make this precious candle.)
Let it mingle with the lights of heaven
and continue bravely burning
to dispel the darkness of this night!
May the Morning Star which never sets
find this flame still burning:
Christ, that Morning Star,
who came back from the dead,
and shed his peaceful light on all humanity,
your Son, who lives and reigns for ever and ever. 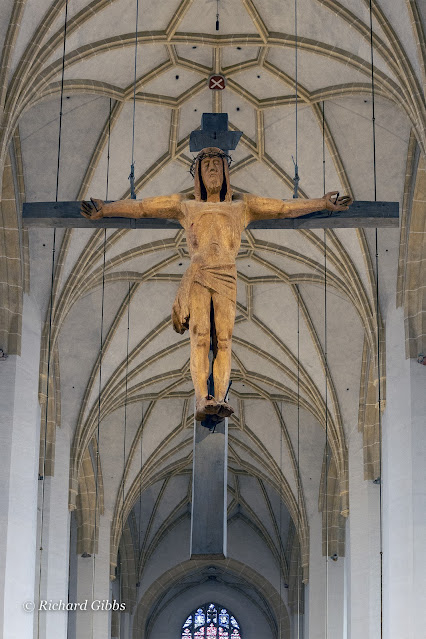 Unlike Amanda, unfortunately I have no faith.  But in the dimness of that crowded place I realised that we had come to a point of no return, and that our relationship could not maintain the equilibrium we had enjoyed for over thirty years.

After Amanda had to retire, we visited our daughters in China and Australia in 2016, but then settled down to quiet routines of swimming, walking, and watching Escape to the Country, rowing back against the advancing deterioration. 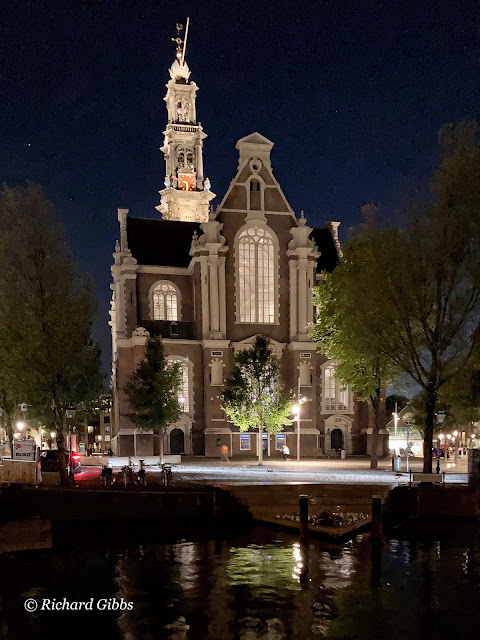 Our last overseas trip was to see the Christmas markets in Krakow in 2019, after which the pandemic raised its ugly head and we were locked down, just the two of us, sneaking out for two walks a day (no swimming) and awkwardly waving and clapping on Thursday evenings on the doorstep to keep in with the neighbours....

During that time, while I caught up on some heavy reading (Boswell’s Life of Johnson – an ironic choice given the lifelessness of the then Prime Minister – and John dos Passos’s USA) Amanda spent her time cutting and pasting, creating Christmas and Birthday cards for her friends and relations all the way up to 2029....)

And then we moved, to Norfolk, in an attempt to find a home where our daughters could stay comfortably should they be able to help with care, and where we could potentially have residential carers should we reach that stage.  It was a good move, though, with retrospect, too late for Amanda to appreciate.  The upheaval disturbed her, and her condition worsened.  So that now, despite all the help and goodwill from family, friends and carers, we are faced with the trauma of dislocation once more.

And so, over eighteen months since we moved, and exactly a year since I last went anywhere at all, with all this in mind, I take a series of trains to Harwich, a place of diminished charm: 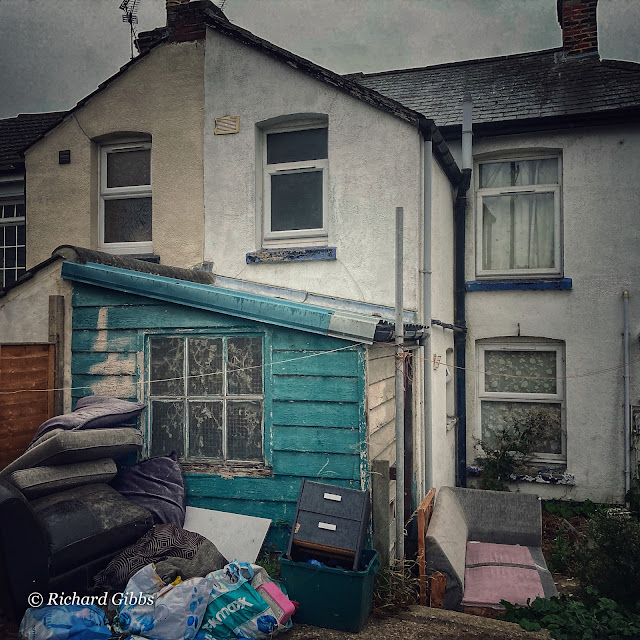 to ship to the continent, with a meticulously planned itinerary to visit old friends and haunts, and to revitalise my tired thoughts.  Amanda is safely installed in a local care home for a period of respite, and I am temporarily free.

In Amsterdam I pass a wonderfully convivial evening with a family of dear friends who we knew from Rome, though as this was almost my first social evening in someone else’s home for some years I was perhaps over-excited? 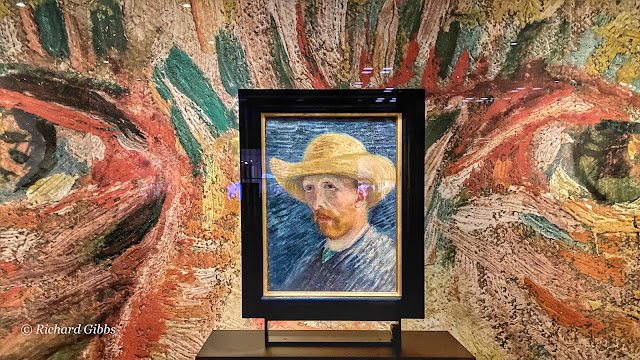 With two other friends, by chance on a similar trajectory, we revisit the Rijksmuseum and Van Gogh, but I am already troubled.  What is it that is gained through this incessant interaction between visitors and works of art?  I don’t tire of Rembrandt or Vermeer, and Van Gogh’s frenetic output never ceases to impress.  But as I gaze at the Lowry like scene in the foyer: 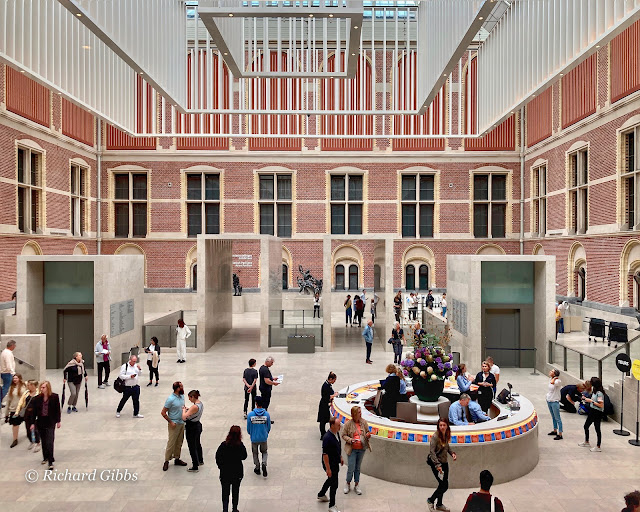 or at the serious attention paid to walls covered in oils, I have a welling sense of futility. 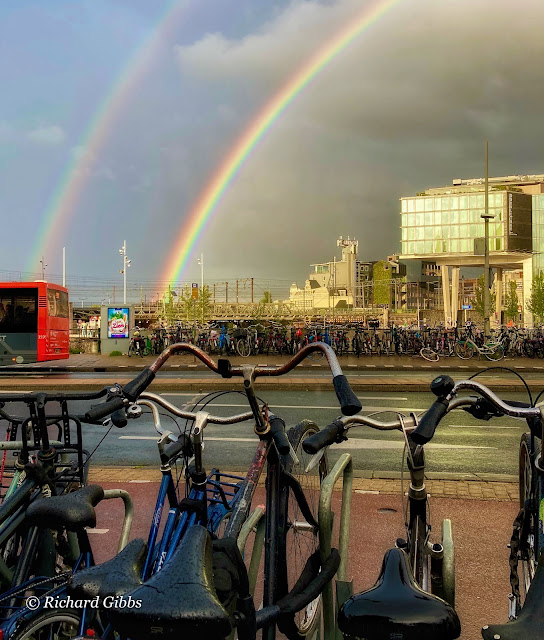 On September 8th at around 16.10 local time, a double rainbow rises from the North Sea.  The following morning the papers are awash with the royal story. And so they are in Germany, Austria and Italy for days to come.  I’m not the only one with problems. 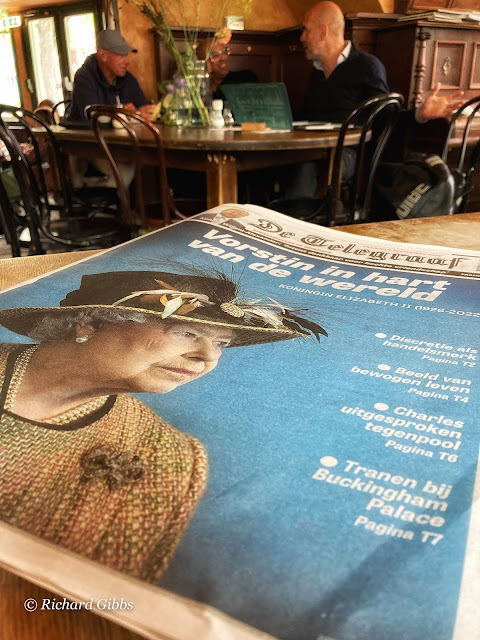 Stranded by a Dutch train strike (yes, it isn’t only Great British Railways, though I must say this was handled differently....) I spend a night where Chet Baker died, and wander Amsterdam in the rain, seeking solace behind locked church doors, 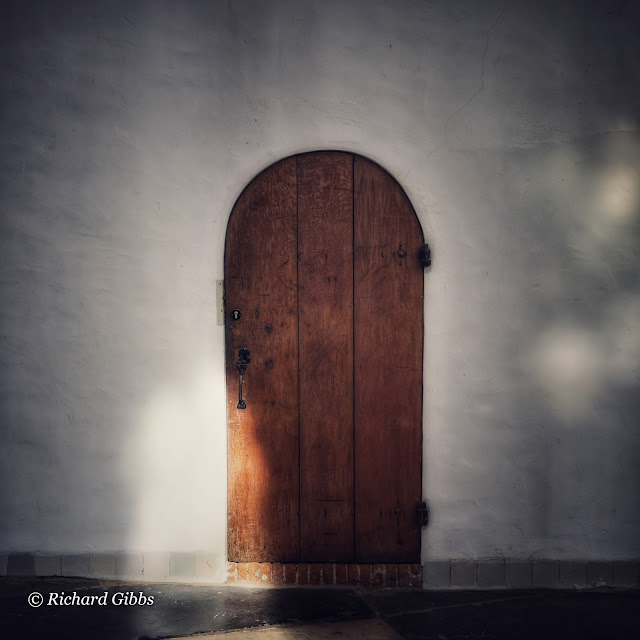 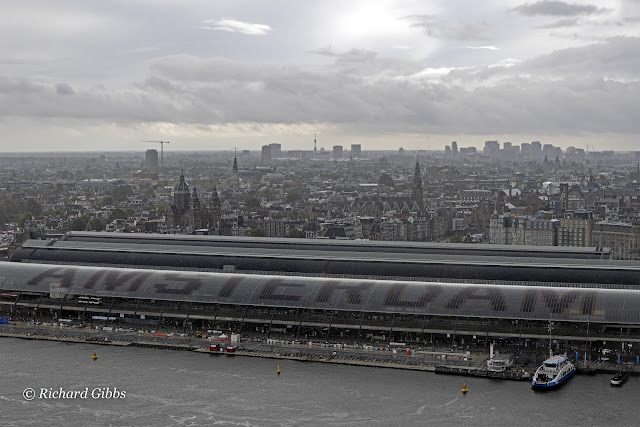 Then I am away, and coursing through Germany, streaking away from my responsibilities, I spend a night in Bamberg, entranced by both the half-timbered Altes Rathaus, 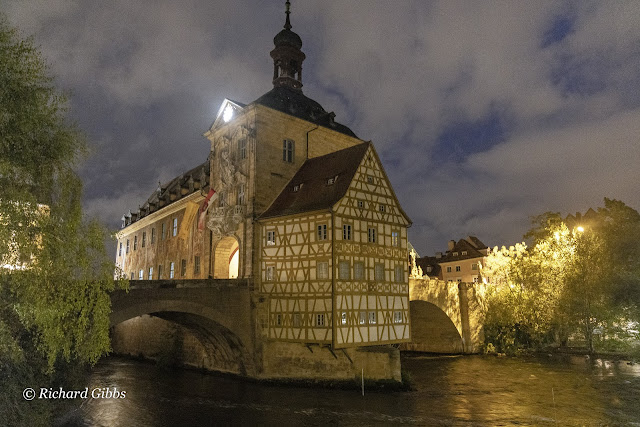 perched above the Regnitz, and jars of Rauchbier (smoked beer) in the dark and warm interior of the Hofbräu.....

Then on to Munich, where other beer halls attract, 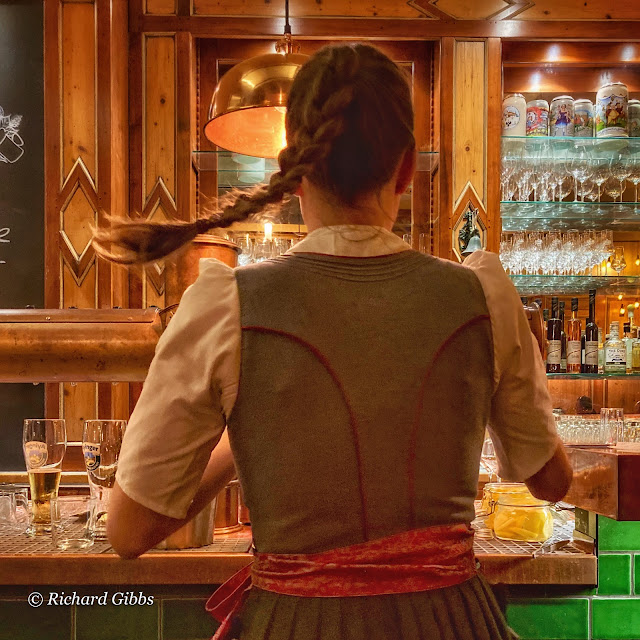 as does the rather moth-eaten Alte Pinakothek, 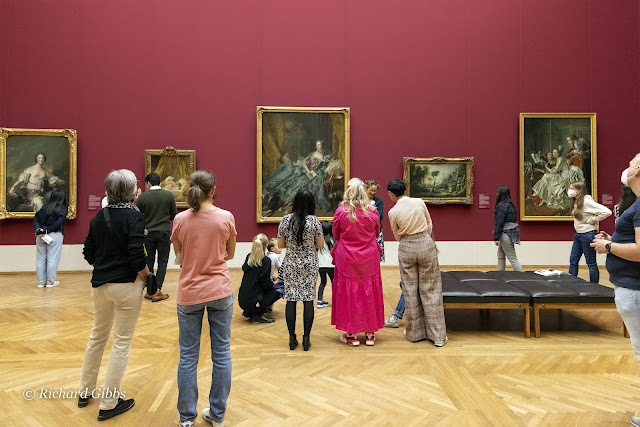 once (1836) the largest art gallery in the world, though with almost every picture glazed with reflecting glass I again find it difficult to know what I am looking at, or for....

I reach the high spot of this part of my journey in Innsbruck, where funicular and the Nordketter Cable Car transports me to Hafelekar at 2,269 metres above sea level.  Here spectacular views across the Tyrol are crystal clear in the mountain air.  Alpine Choughs: 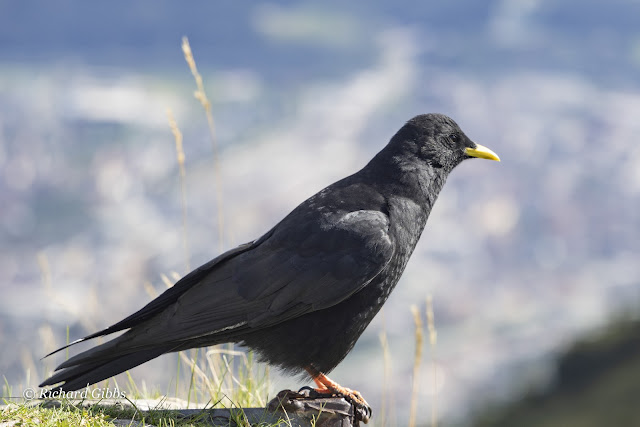 hop about round my feet, and for a moment I feel almost weightless, though from here the only way is down.....

This journey is a pilgrimage, like the wanderings of the peregrine, or like a journey down the Milky Way to Santiago de Compostela, a journey that in Luis Buñuel's film La Voie Lactée plays with time, and entertains questions of orthodoxy and heresy. I don’t mean to exaggerate, but if we are thinking beings, we should be examining the purpose of existence and trying to make some sense of our place in the universe. On my various trains my thoughts turn frequently to Amanda and the life we have shared, the places we have visited. At the top of the Karwendel Nature Park above Innsbruck, I am reminded of a trip Amanda and I made to Salzburg, before the children were born. From there we had a day trip up into the Tyrol, in shiny blue weather, like today, and we surveyed the rocky and snowy world from on high. 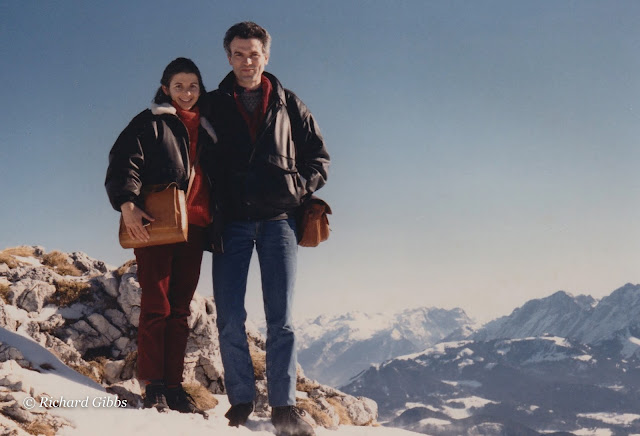 And we believed, then, in a bright future.

[All photos, except that of the two of us in the Tyrol, taken either on my iPhone SE or my Canon EOS R5]