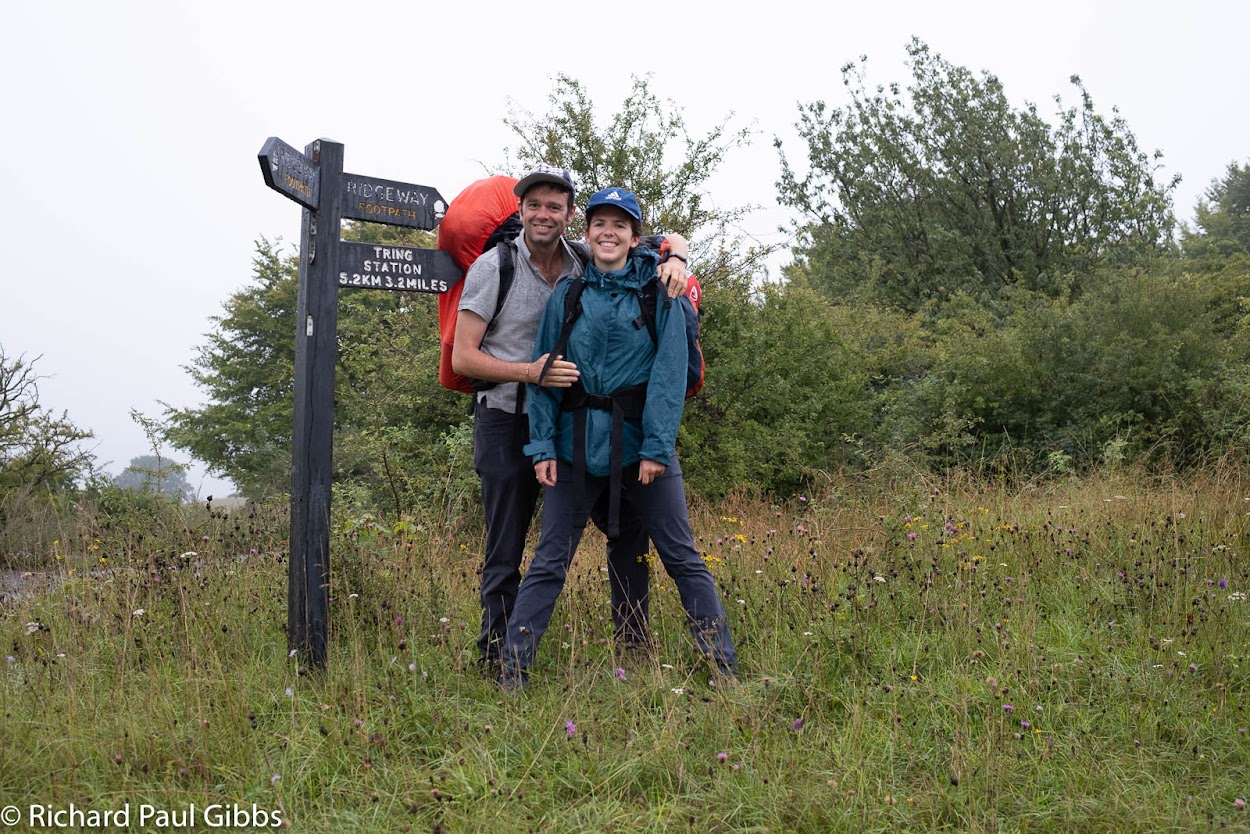 It was grey, and wet, and slippery, and not a great day for an 87 mile trek.
Though it could have been worse.  It could have been hot, like two weeks ago.  Or thundering, like a week ago.
Nothing's ever right.
It's all a compromise..... 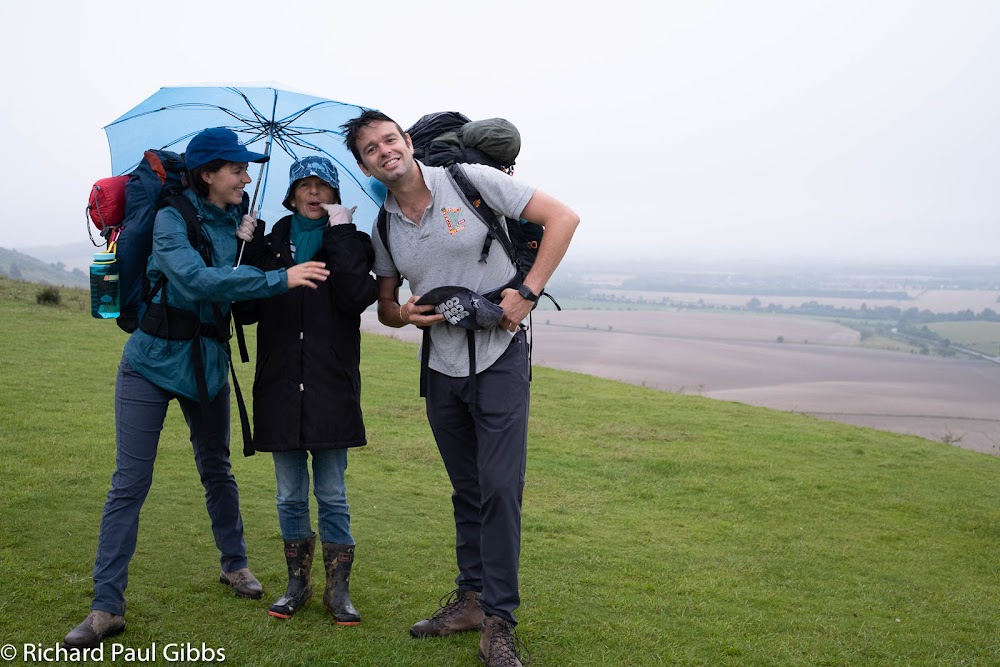 Anyway, yesterday, we made it to the top of Ivinghoe Beacon at the northern end of The Ridgeway National Trail, looking into the murk over the Vale of Aylesbury.  Amanda held her umbrella to shelter our daughter Hannah and her husband, Cameron, while I took some pics of the occasion. 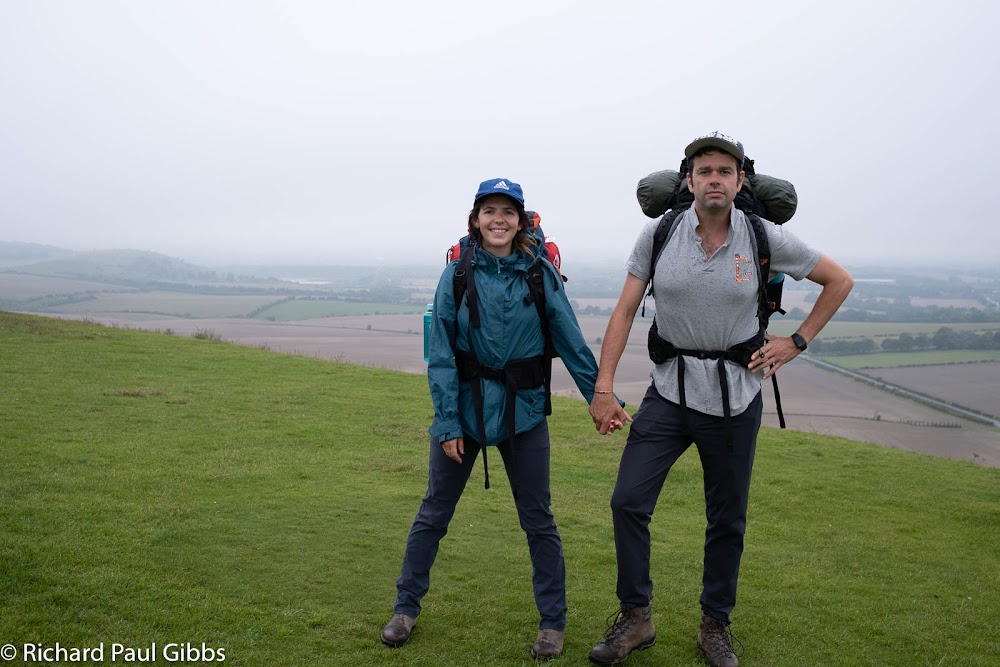 So, all geared up, and carrying packs with a tent and sleeping bags, food and 'stuff' here they are, smiling, and raring to go.
This was not a mercenary mission; it was something they had wanted to do, and with the relaxation of lock-down, the plan had been finalised.
But it seemed a good idea to ask for sponsorship to raise money for the National Brain Appeal as this charity manages Rare Dementia Support (Rare Dementia Support is a fund held by the National Brain Appeal. Registered Charity Number 290173) which we benefit from in caring for Amanda, who has the semantic variant of Frontotemporal Dementia..... 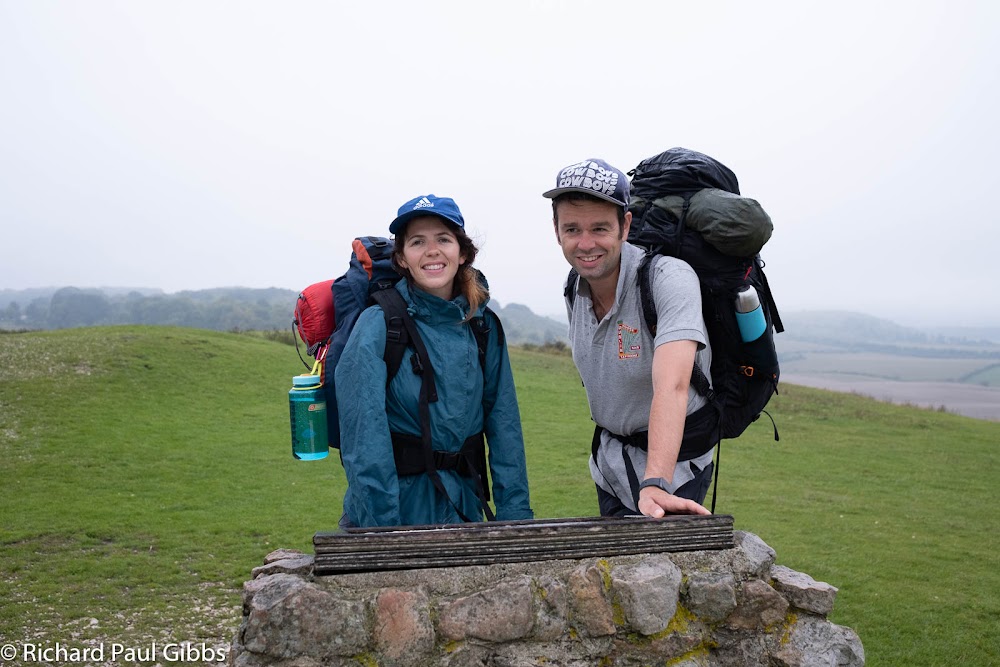 Dementia is currently incurable, and it is a one-way street. It is no fun for the sufferer, but is also hard for the family and carers, as memory slips away, recognition and language disappear, behaviour becomes unpredictable and sometimes problematic if not dangerous. But thanks to the researchers at the National Hospital for Neurology & Neurosurgery, Queen Square, London, and their associates, progress in understanding is being made, and support is offered to sufferers and their carers.
(Which is good, as there is very little on offer from this government.....) 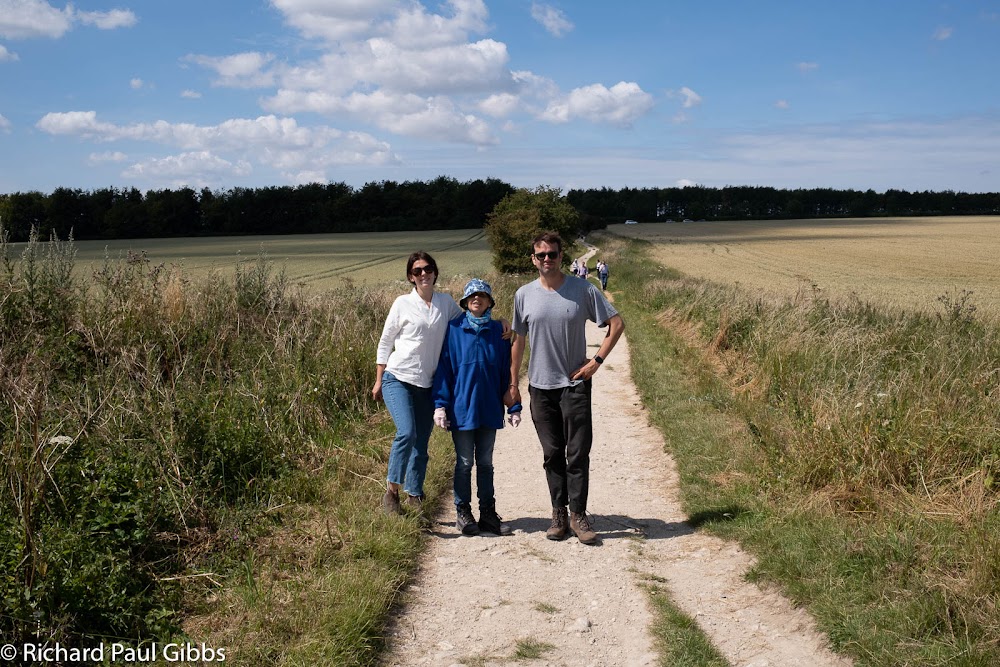 A few weeks ago we did a little reconnaisance, and walked to Wayland's Smithy, a two-phase Neolithic tomb originating from about 5,500 years ago. According to English Heritage, Wayland’s Smithy has been a recognised feature of the historic landscape since at least the 10th century AD. The name of Wayland’s Smithy has been linked to the long barrow since at least AD 955, when it was referred to as ‘Weland’s Smithy’ in a Saxon charter. It appears to be a name handed down from a time when metalworking was remembered as a potent, even magical practice.
It is a magical place, surrounded by mature trees and resting largely undisturbed by the masses..... 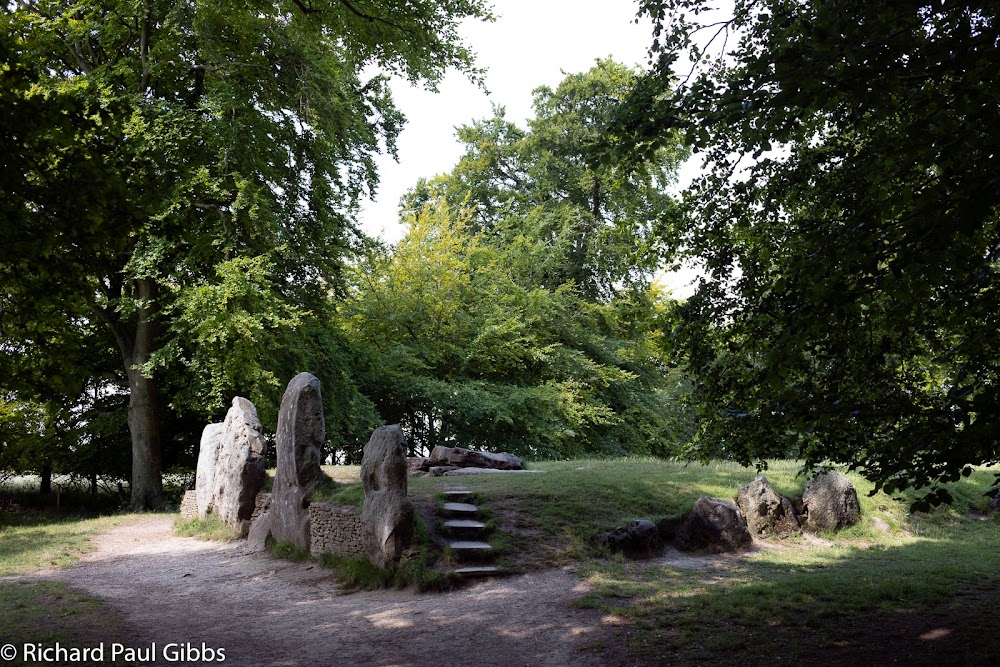 It looked pretty much the same when I first visited, (shortly after it was built.....) which is reassuring in a way..... 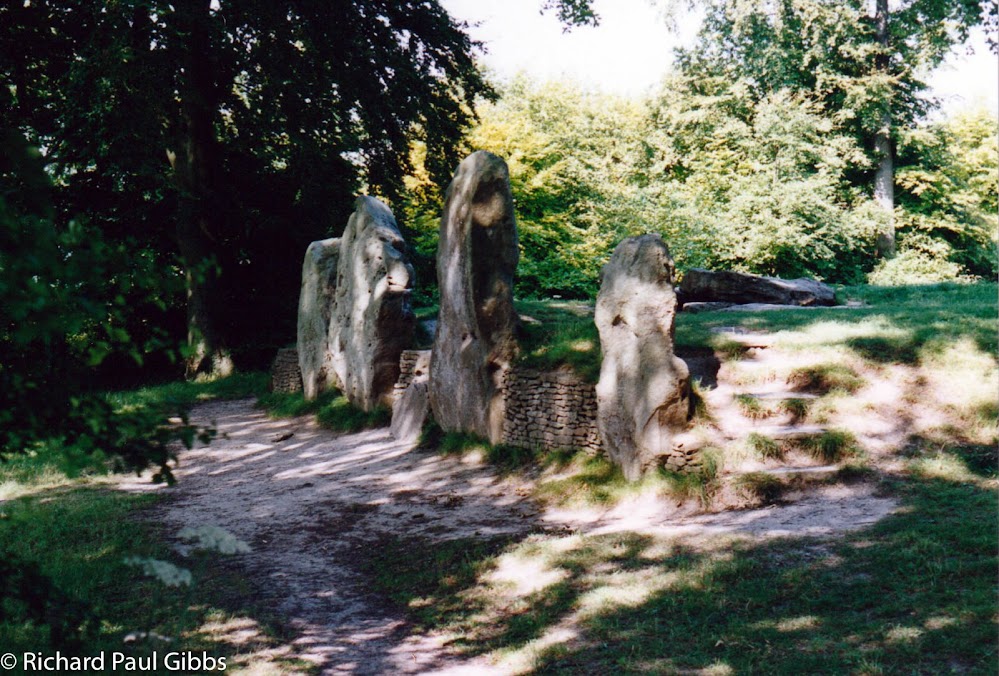 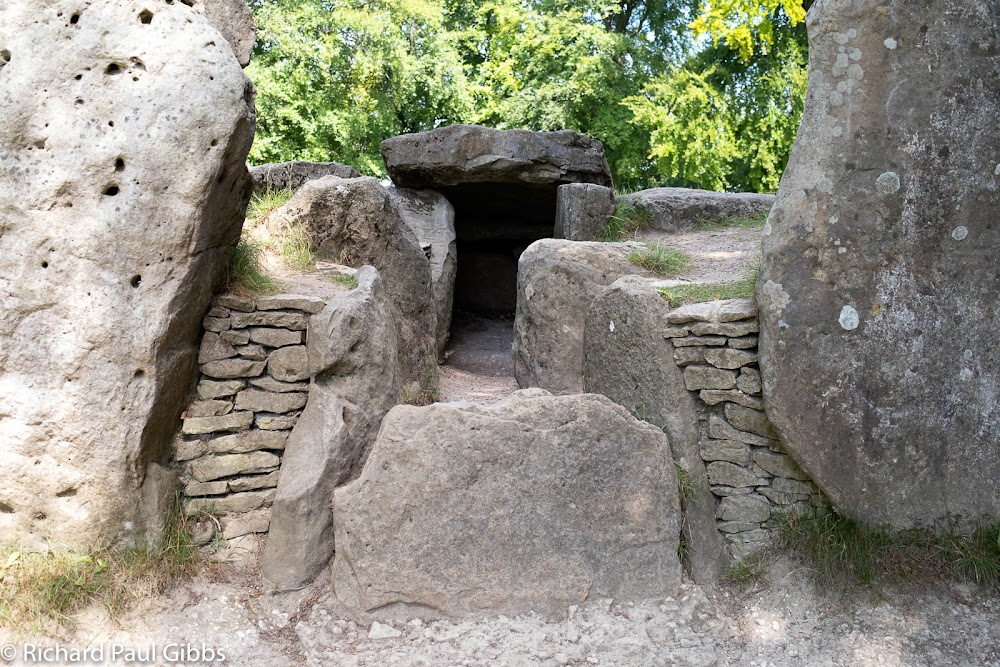 It's not the only piece of prehistory upon the Trail (and that's apart from me.....) The Ridgeway itself is an ancient pathway, trodden by innumerable human feet over at least five millennia.  Some of it is now on metalled tracks, 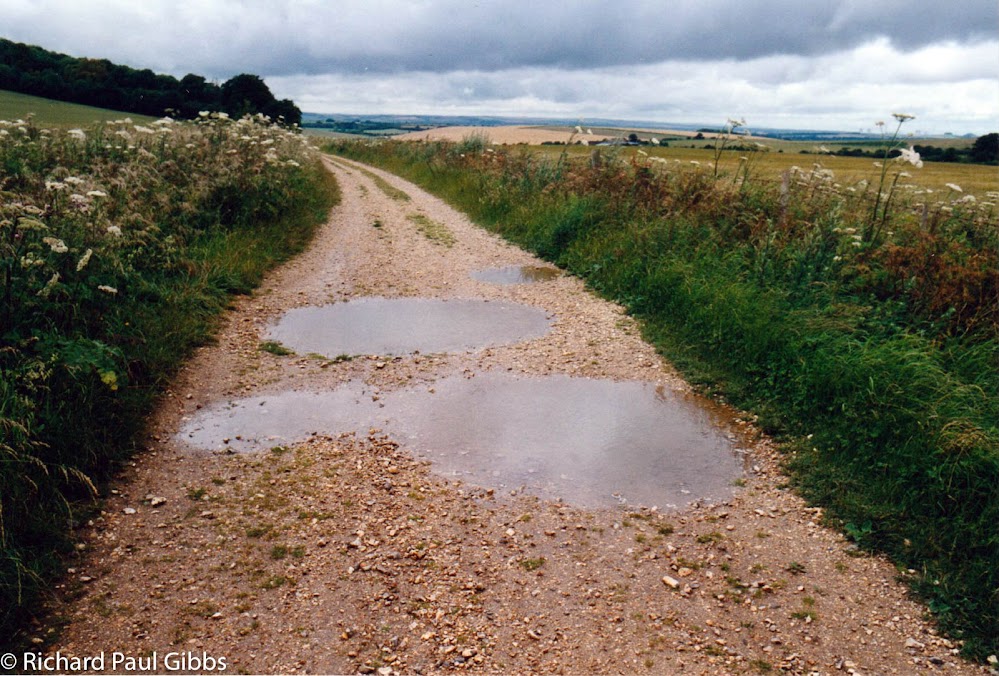 some on muddy footpaths,  (and this is Hannah, yesterday), 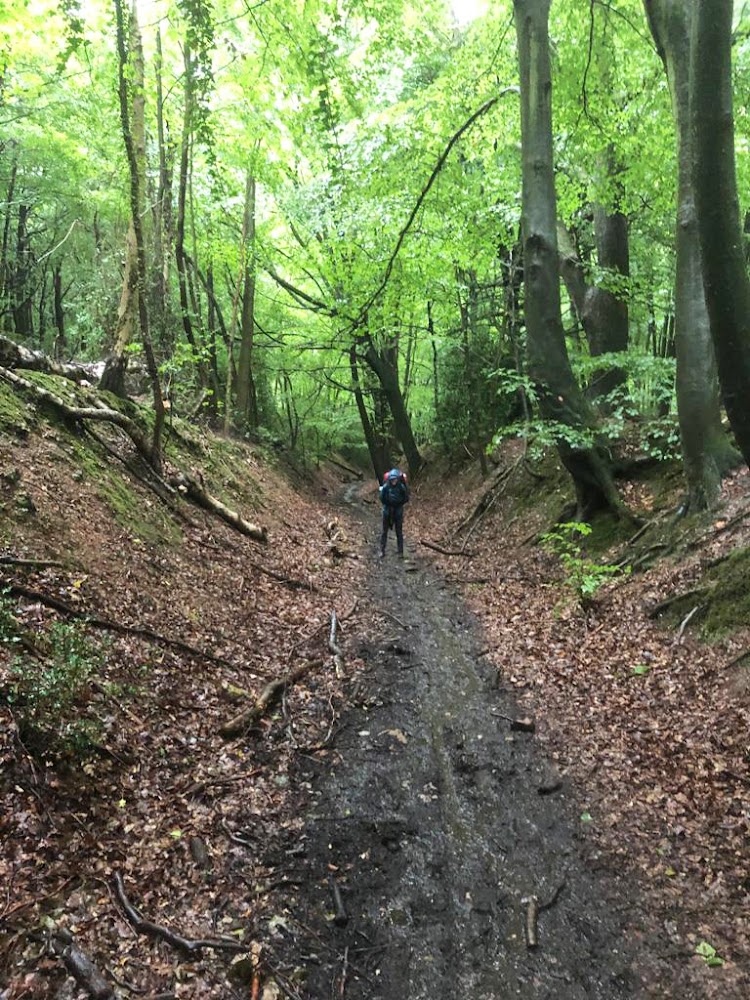 I walked it about twenty years ago, when I was a lad of fifty or so, but it has been a National Trail since 1972. 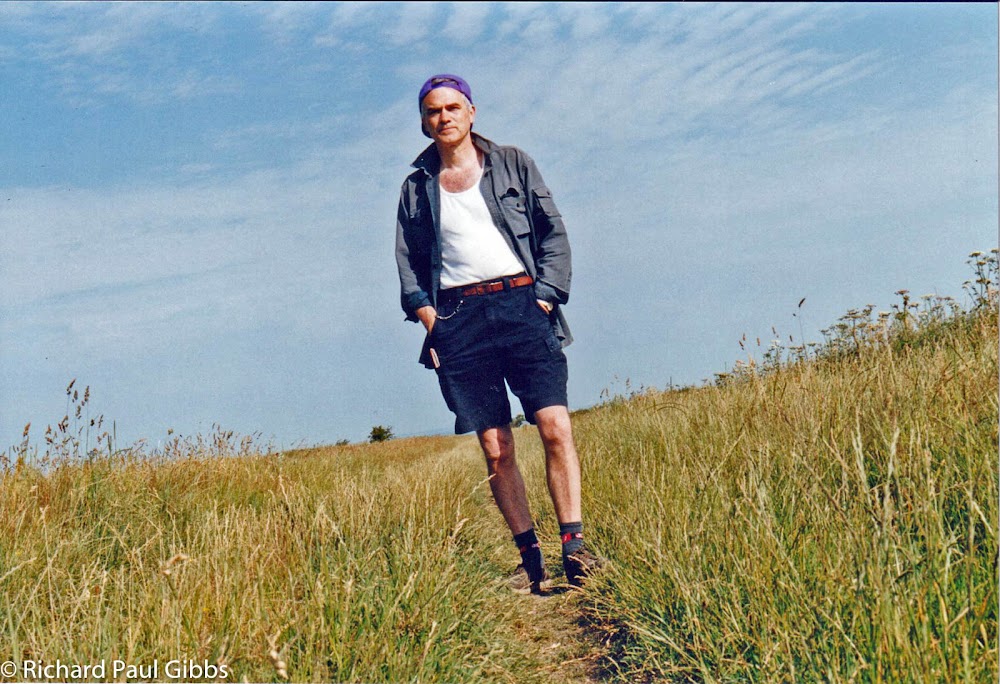 It is part of a longer route which connected the coast of Dorset with the Wash and the North Sea.  In this section it follows the chalk ridges of the Wiltshire Downs and the Chilterns, so it is well drained and allows for fair visibility all round.

Along the way there are sites such as the Bronze Age Uffington White Horse, and the Iron Age Hill Fort known as Uffington Castle, where Amanda inspected the Trig Point at 261 metres above sea level. 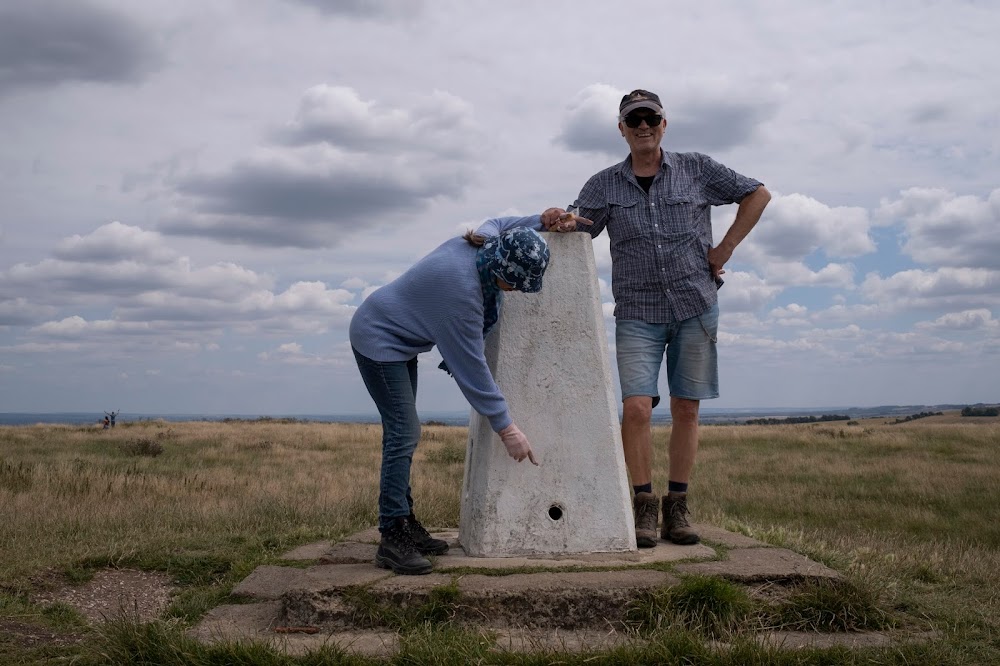 The route is not all consistently well surfaced, but some stretches, as here near Uffington Castle, have been made good for wheelchair users, and, inevitably, cyclists.  When I walked it, however, much of it was uneven and in places badly rutted by off-road motor bikes, which made the going pretty tiresome. 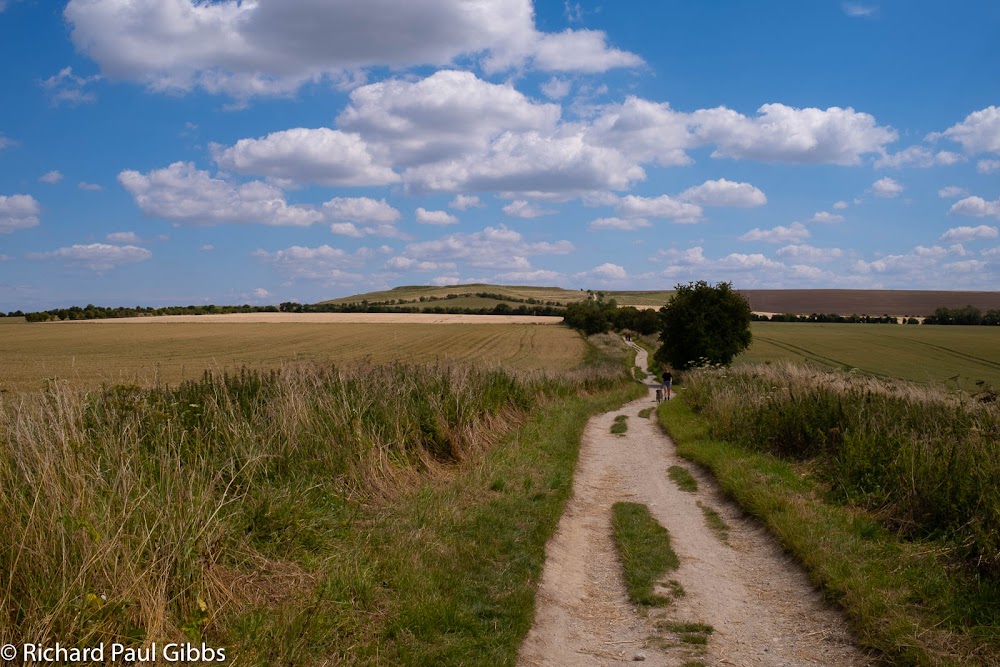 I walked it in high summer, though the first two days I got pretty wet and my boots rubbed and I felt quite sorry for myself (as you can see.....) 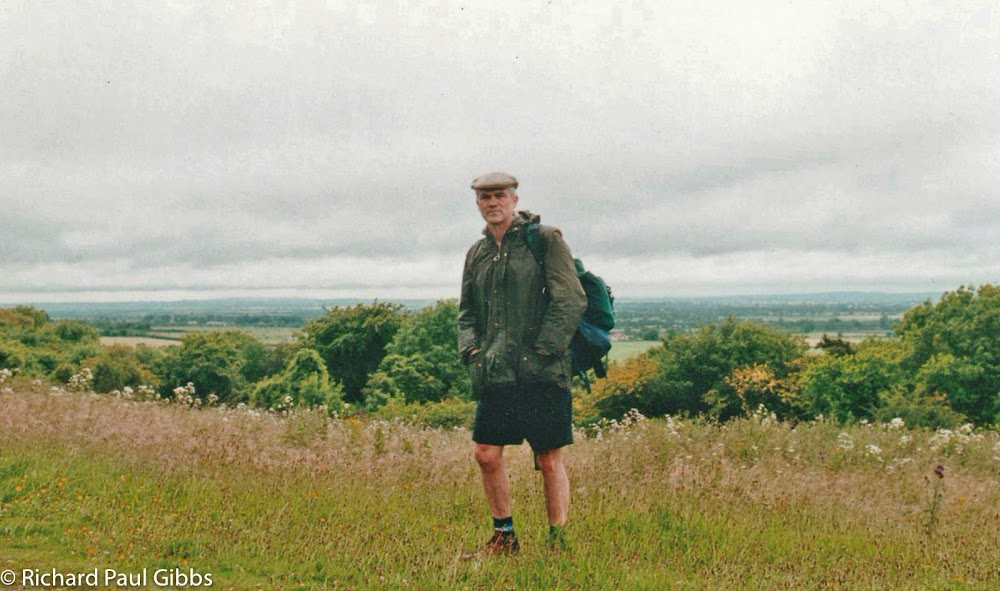 But it warmed up after crossing the Thames at Goring Gap, and by the time I got to the White Horse my brain was scorched and I had to lie down.....
But I survived, and didn't wake up to find myself entombed, so I carried on...... 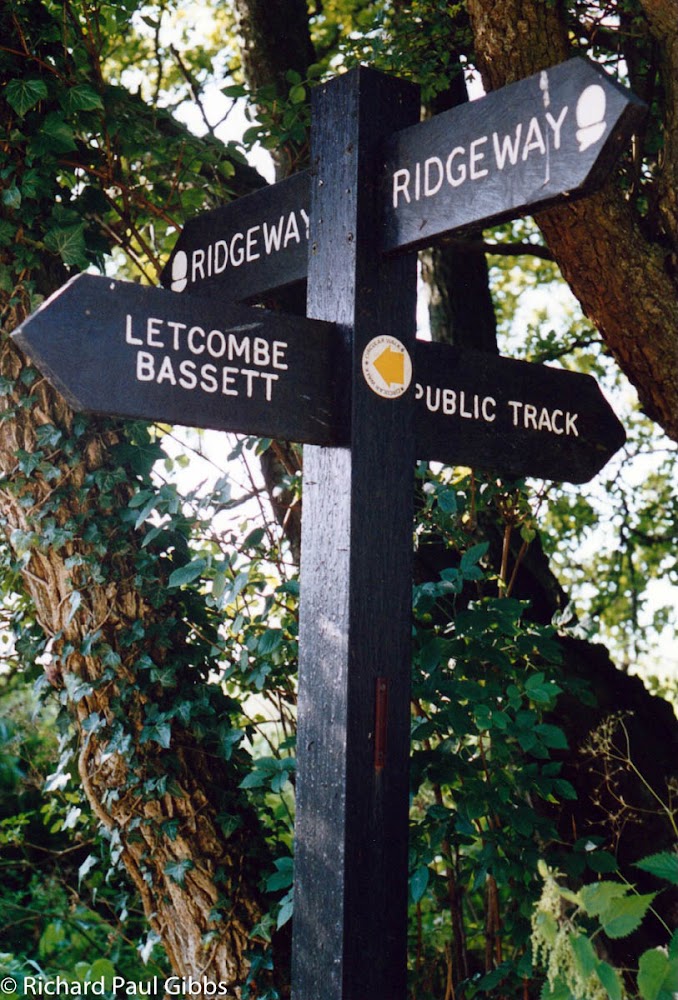 And after another day or so I passed Barbury Castle, another Iron Age Hill Fort, 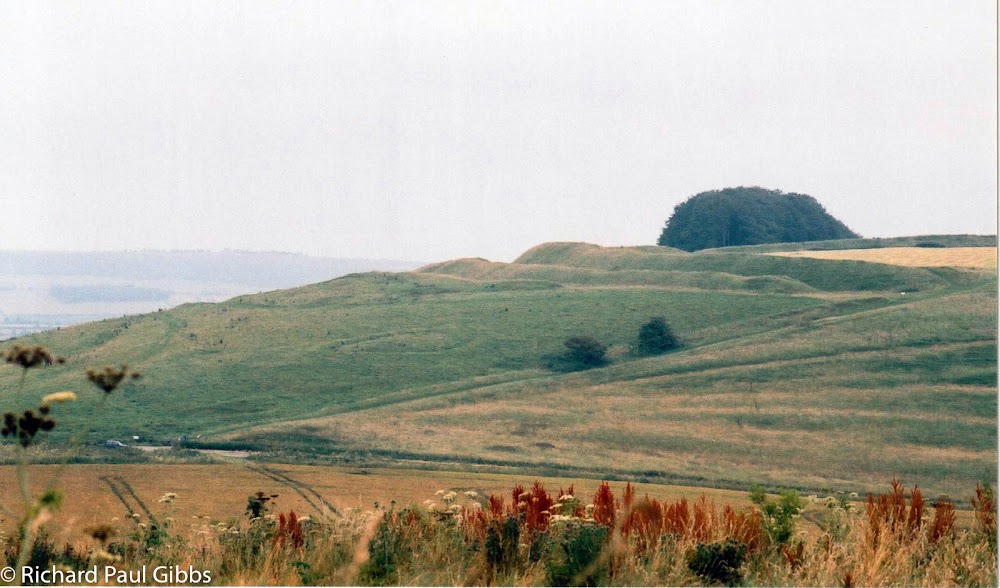 And then, finally, after some five days of hard walking, I hobbled down to the World heritage Site of Avebury, where a lot of stones live in a circle.
It was a wonderful feeling, and the stones were so welcoming! 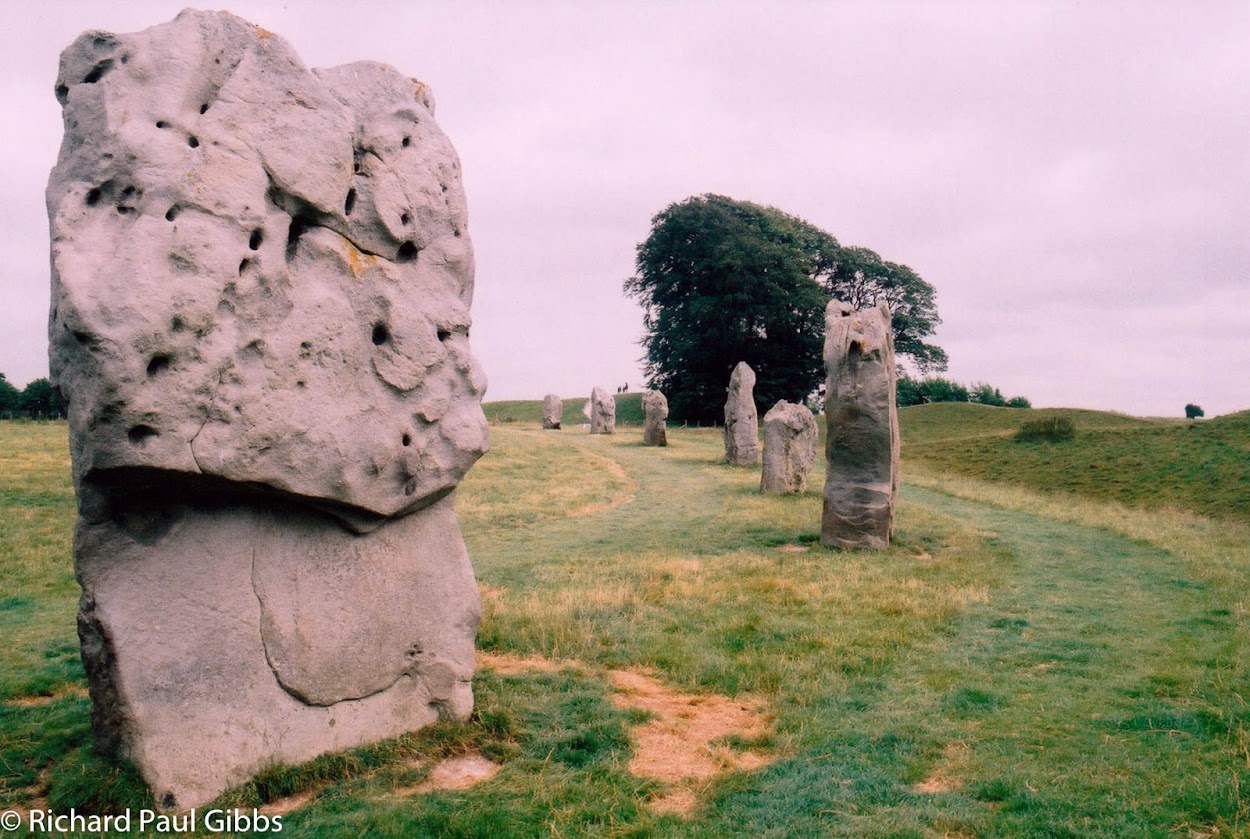 This is where Hannah and Cameron will be in a few days time, footsore but happy, with a great sense of achievement, after their 87 miles of backpacking. And, I hope, having inspired donations to help a seriously good cause.  Please support them, if you can, by donating something via JustGiving via:
http://www.justgiving.com/Richard-GIBBS14 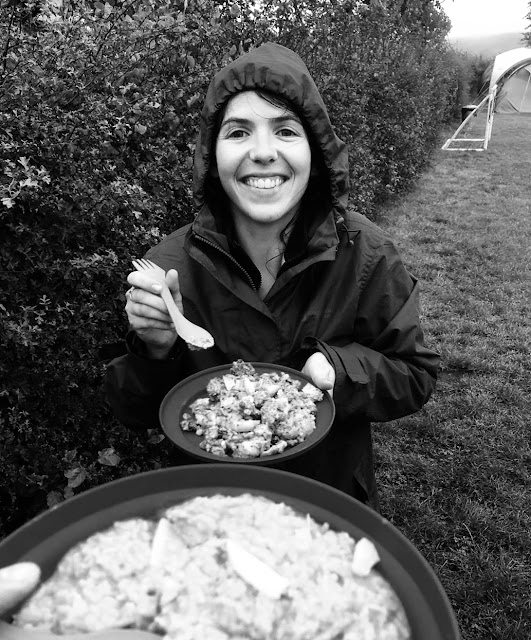 For information relating to a specific dementia diagnosis contact the RDS Direct Support Team at contact@raredementiasupport.org or by telephoning 07388 220355 or 07341 776317 and we will refer your enquiry to the most appropriate team member.

Please note that phone calls will not be answered immediately, so please leave a voicemail message with your contact information if you would like to speak to somebody on the telephone.

For more information about our work or to share your stories and feedback please email: contact@raredementiasupport.org.