To every thing there is a season.....

They were beautiful, the last weeks of summer.  Santa Maria Maggiore glittered through clear September air.

Doors stood open, and walls glowed with the last of the summer heat..... 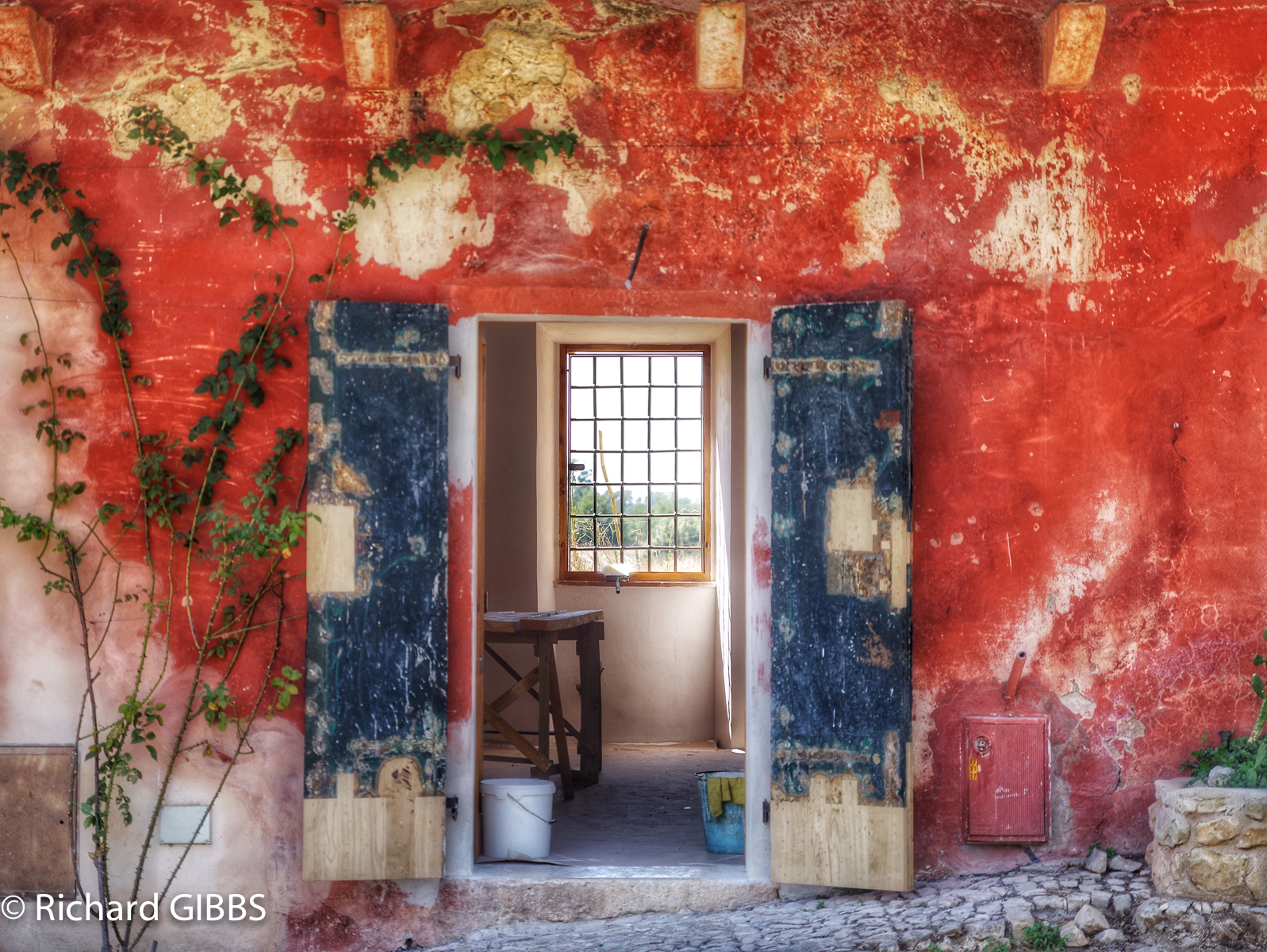 The countryside of Lazio, with its crumbling traces of past successes, delighted with still youthful greenery.... 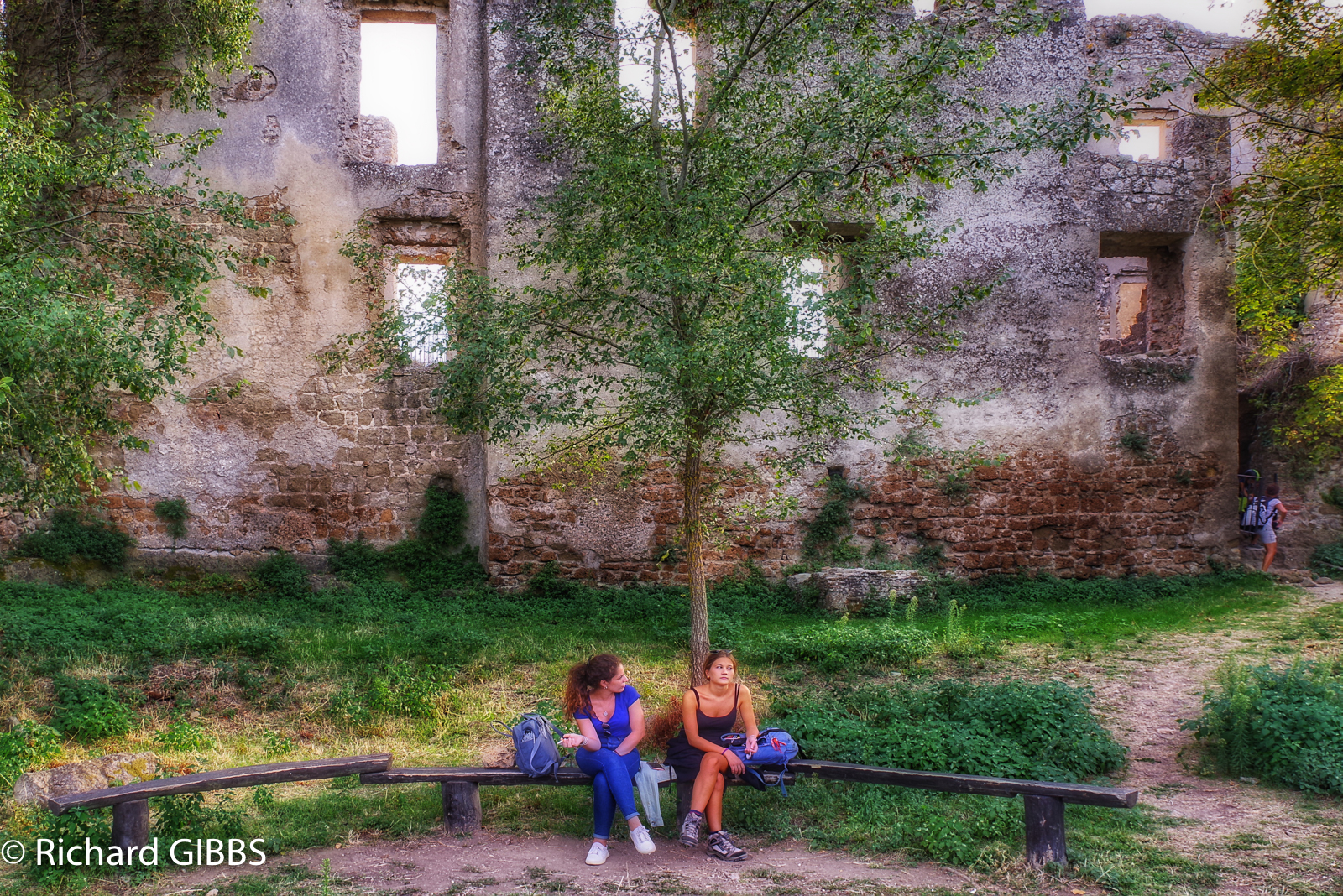 My little loved the warm springs under the clear sky, bathing in the volcanic waters of the Terme di Stigliano.... 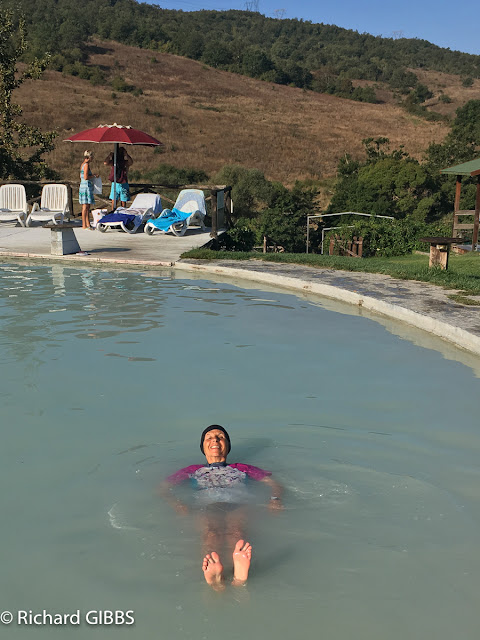 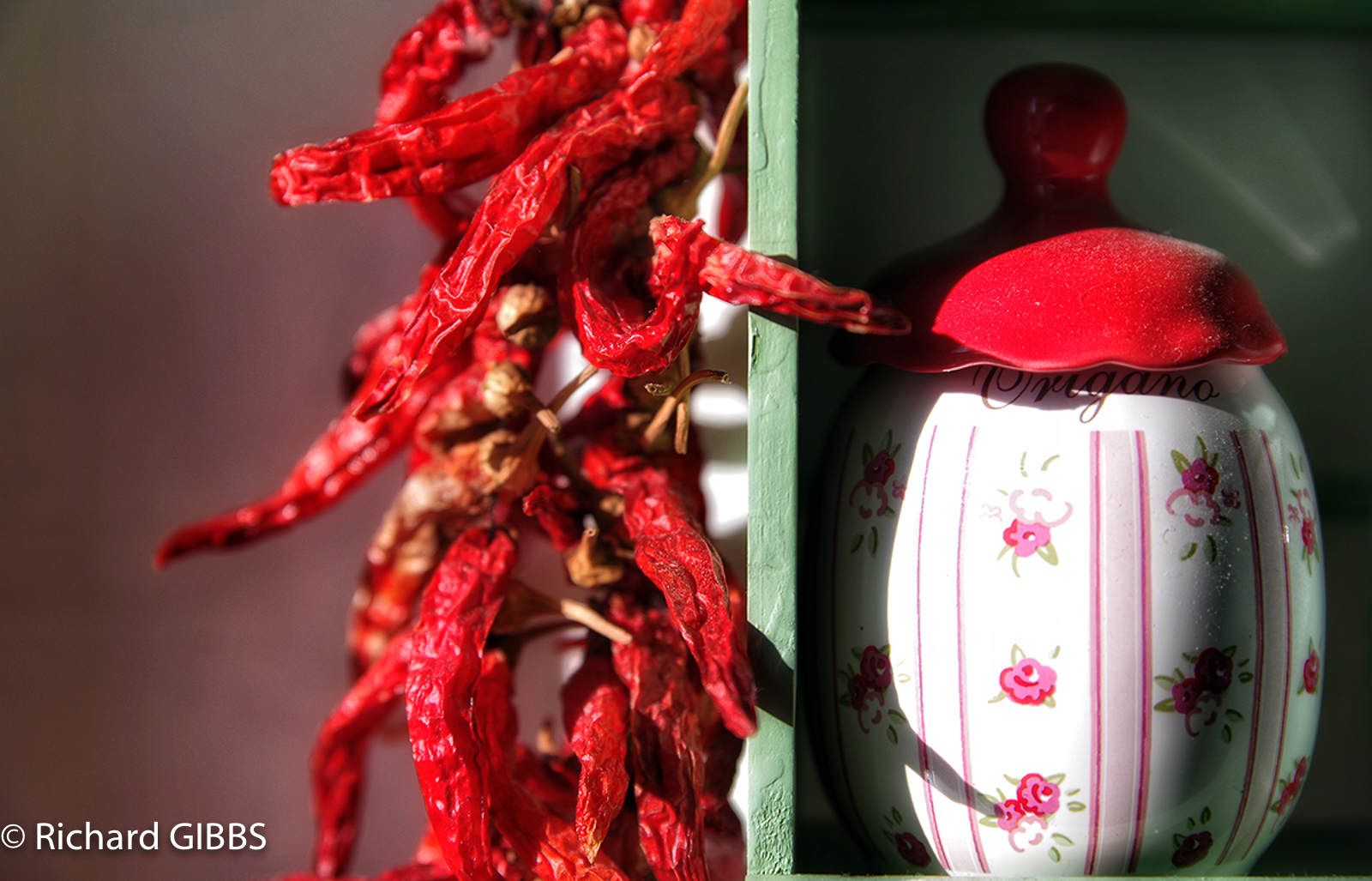 The evenings were still warm enough for sitting out with Jack Daniels on the rocks, and for a a goodnight kiss from 107 year old Truman, 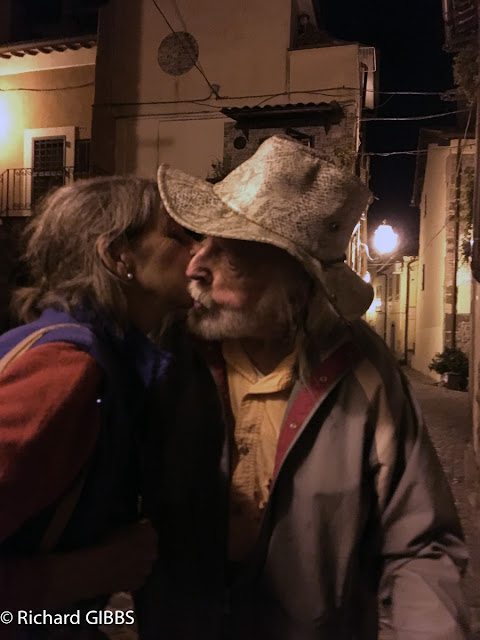 There's still time to every purpose under the heaven, 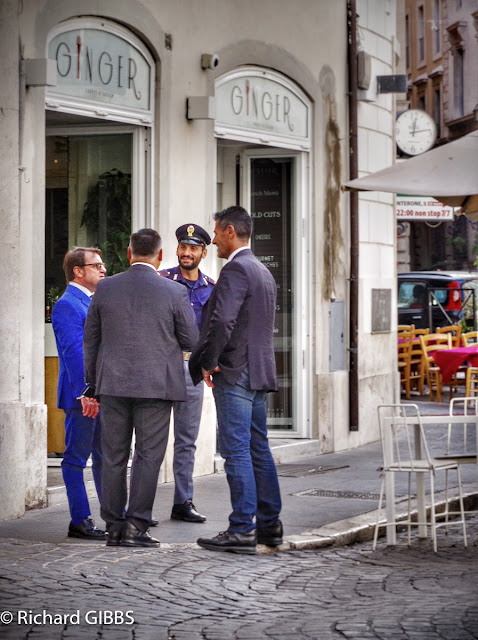 Time to keep silence, and a time to speak, 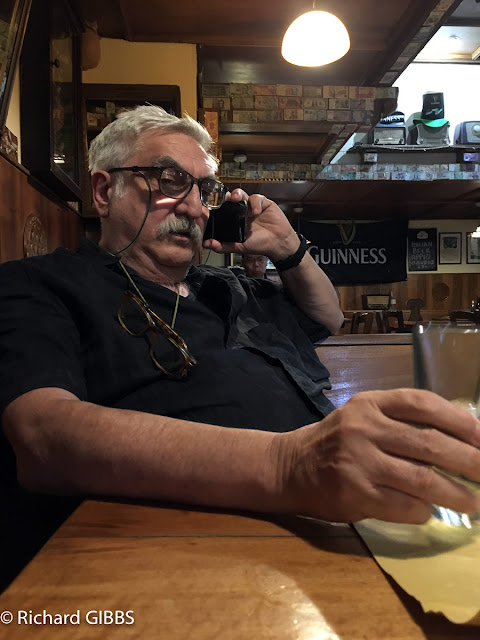 Then we turned north, dragging our heels to Tuscany,  gearing ourselves for the return to darkness and confusion.

But it was yet clear, and fine, and from the summit of Monte Amiata I looked back to Lake Bolsena and the distant shape of the Monti Cimini that enclose Il Lago di Vico, with Monte Soratte spiking to the east,

Which view holds more than a third of my life, and more than half my heart.

A time to weep,

It was hard to turn away, but we had friends to see, Corrado, now in his nineties, and  his wife Concetta, who was nervously awaiting treatment in hospital in Siena, Then we climbed the hill to the farmhouse where Corrado was born,

Where David and Sarah were preparing supper: fegatelli, and pollo, and salsicce, grilled outside on a wood fire. The smells and tastes recalled more than forty years of Tuscan suppers in this place.... 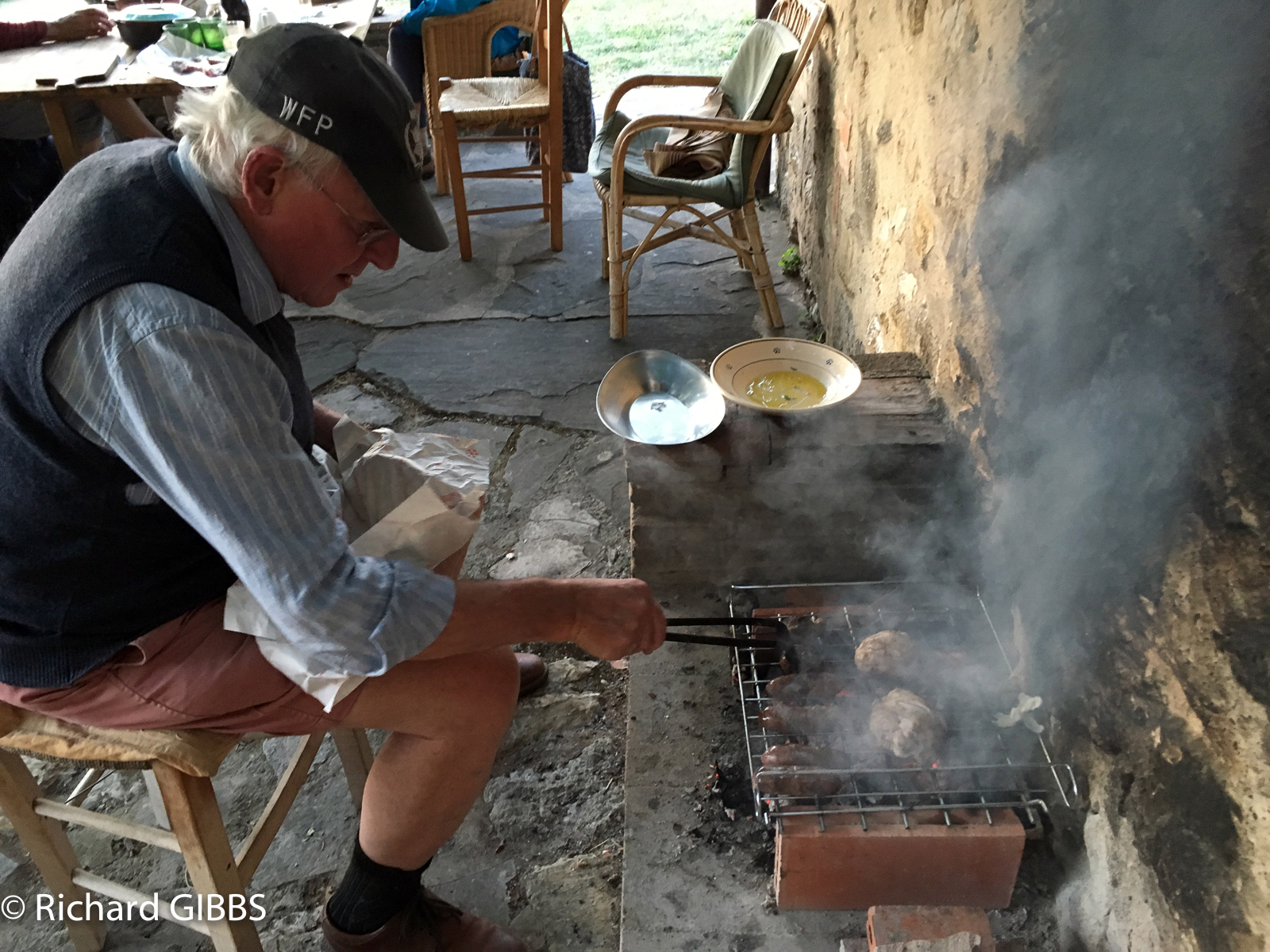 And then the September sun subsided behind the young walnut tree that came after me to these wonderful views, 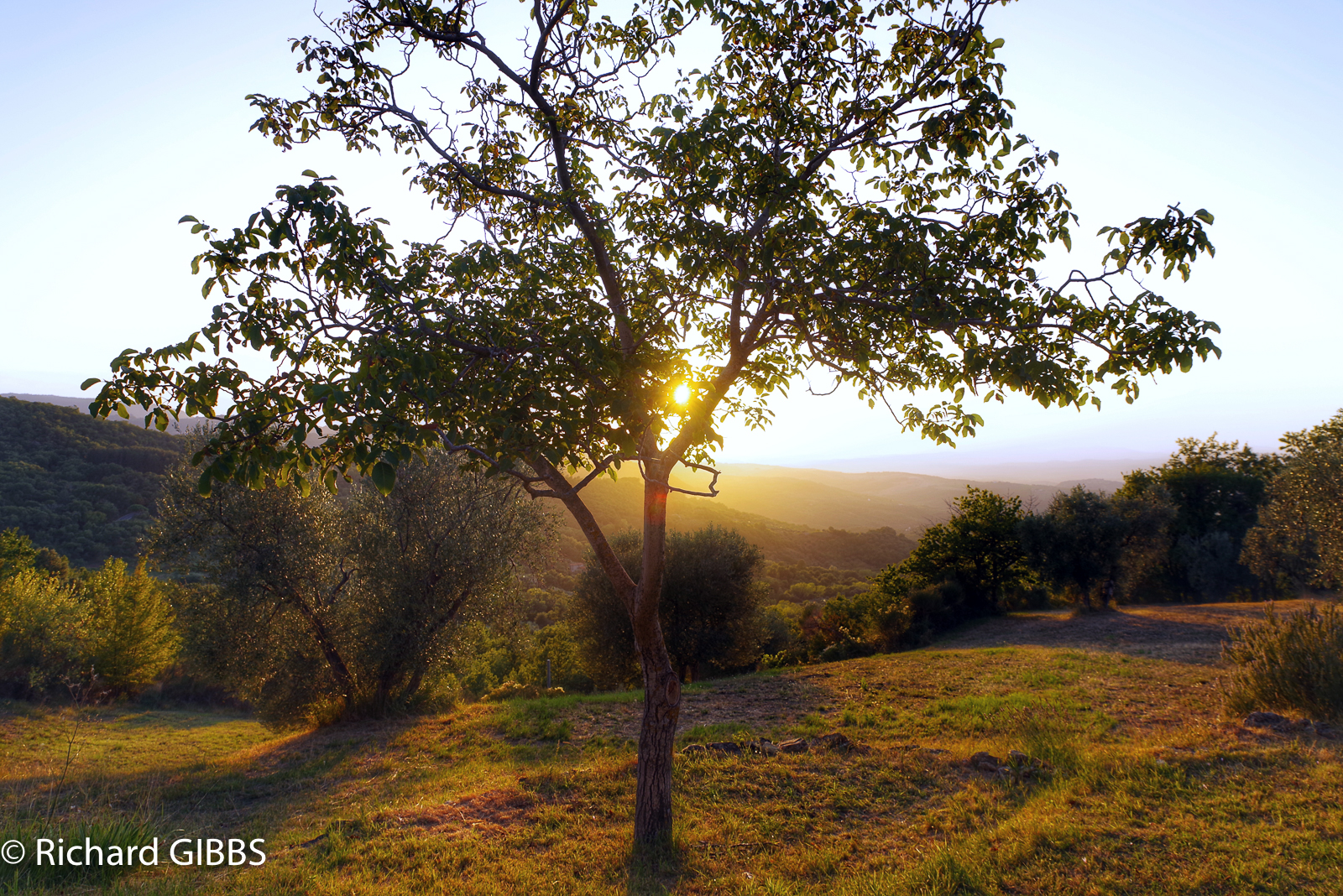 Thunder storms gathered in the night and rolled around the mountain, rain drumming on the tiles.  In the morning clouds clung to the slopes as we left, heading further north,

We passed the village of Seggiano, once archetypical of the area, but now home to many different tongues, 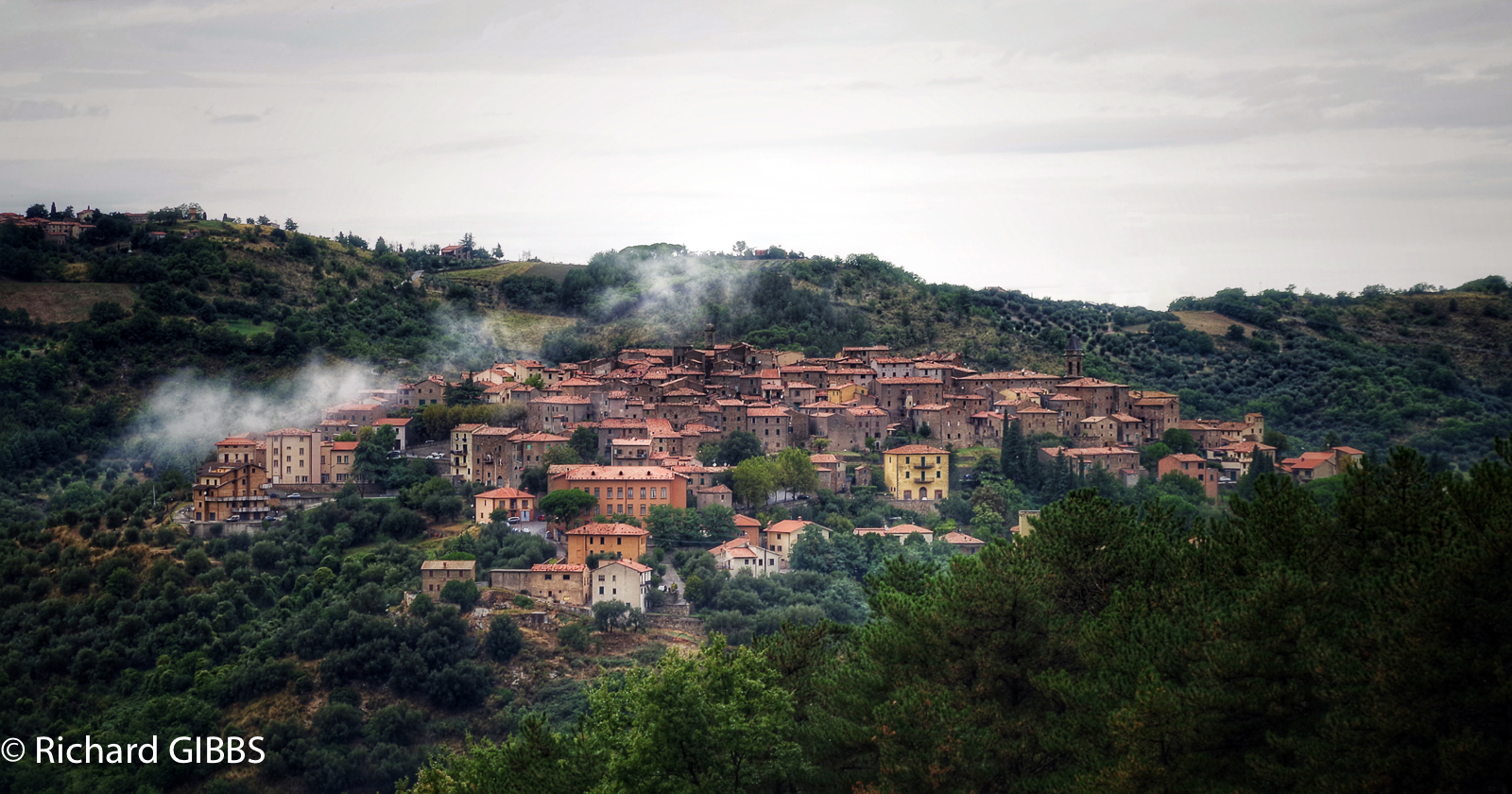 We looked back at the twin peaks of Monte Amiata, beyond the five star Castello Di Velona Resort, Thermal SPA & Winery, which we used to visit as a ruin, ancient hand-written ledgers still lying among the shreds of crumbling chairs and tables.... 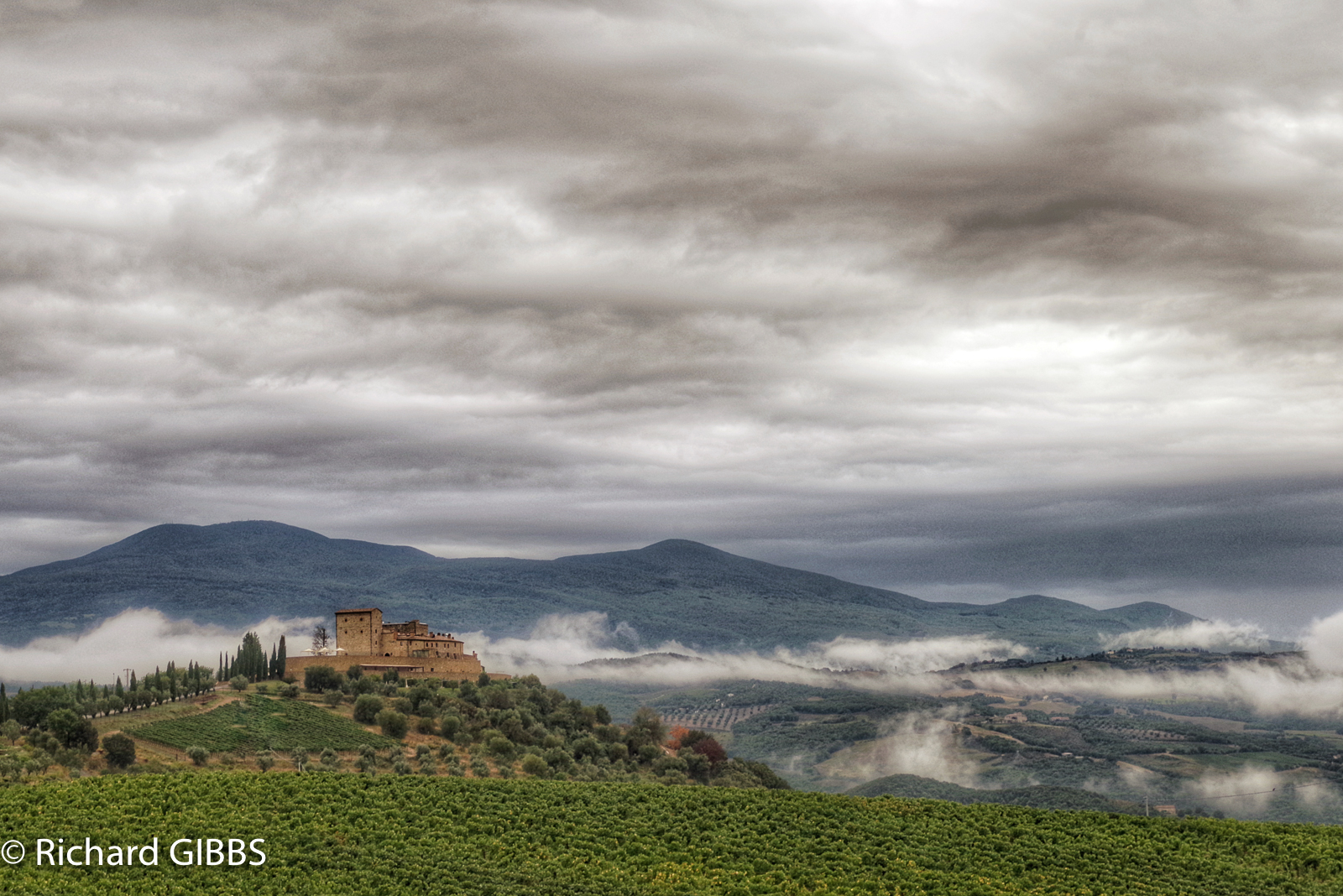 We paid our respects to Charlemagne and those whose craft designed the Abbazia di Sant'Antimo, one of the most  beautiful churches in Italy, where once rollers nested in the bell tower and the custodian would scoot down from Castelnuovo dell'Abate to open up, but where now coaches disgorge culture-hungry tourists, and youthful couples come to celebrate their silver weddings.... 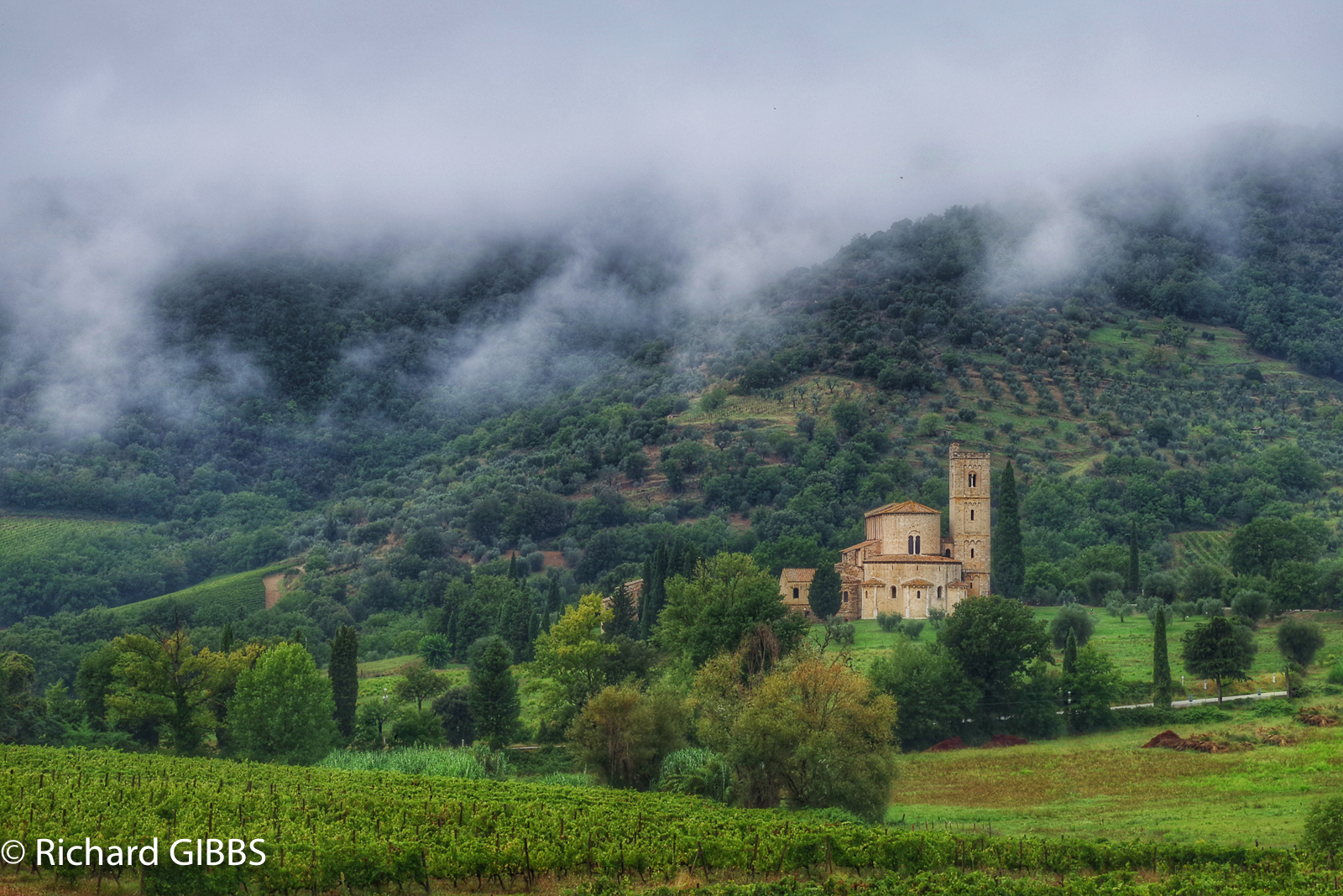 We took a break in the Caffe Fiaschetteria Italiana 1888 in Montalcino, sipping cappuccino amongst the display of the riches of Brunello, 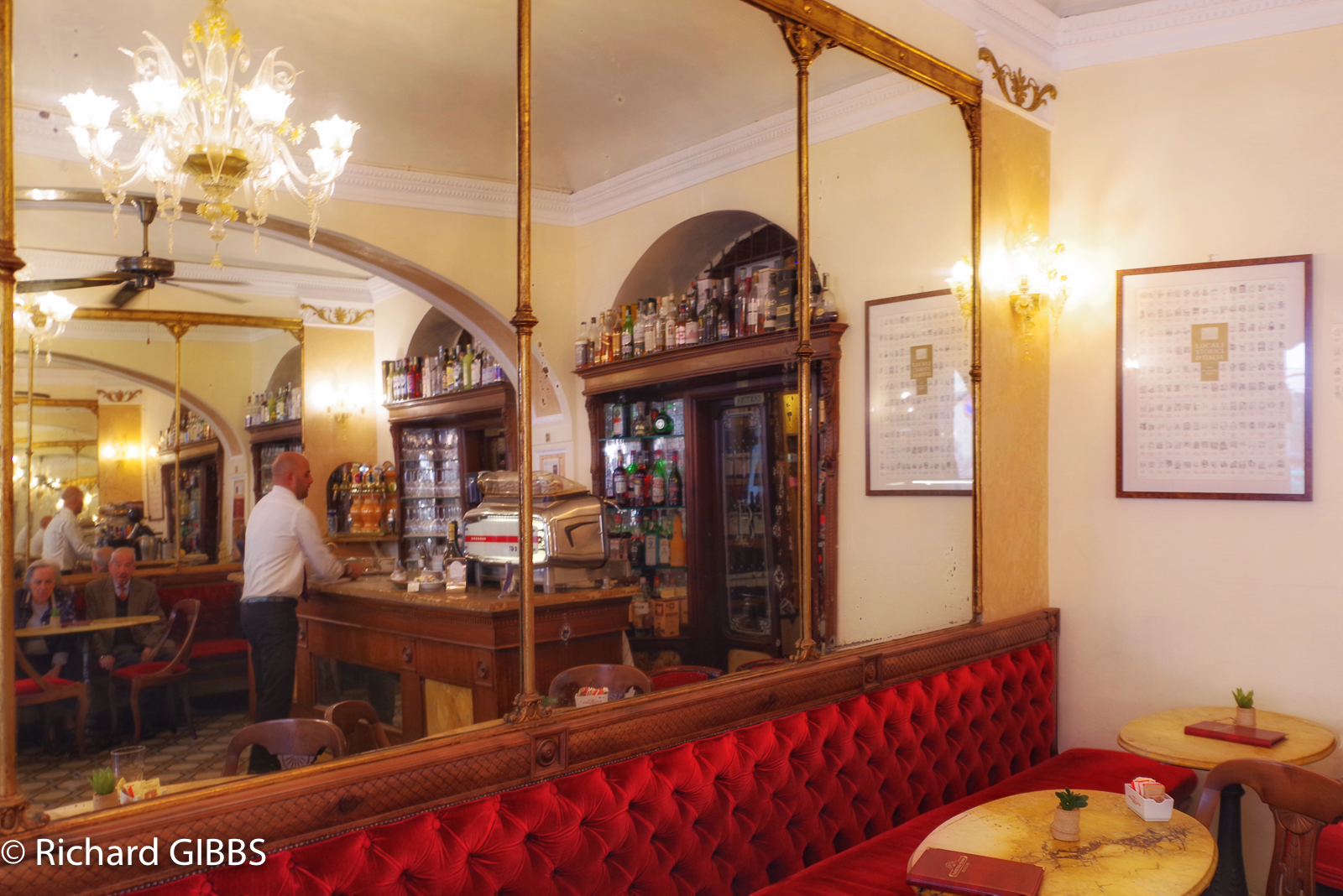 In Siena footsteps played on the cleverly laid stepping stones in the cathedral, 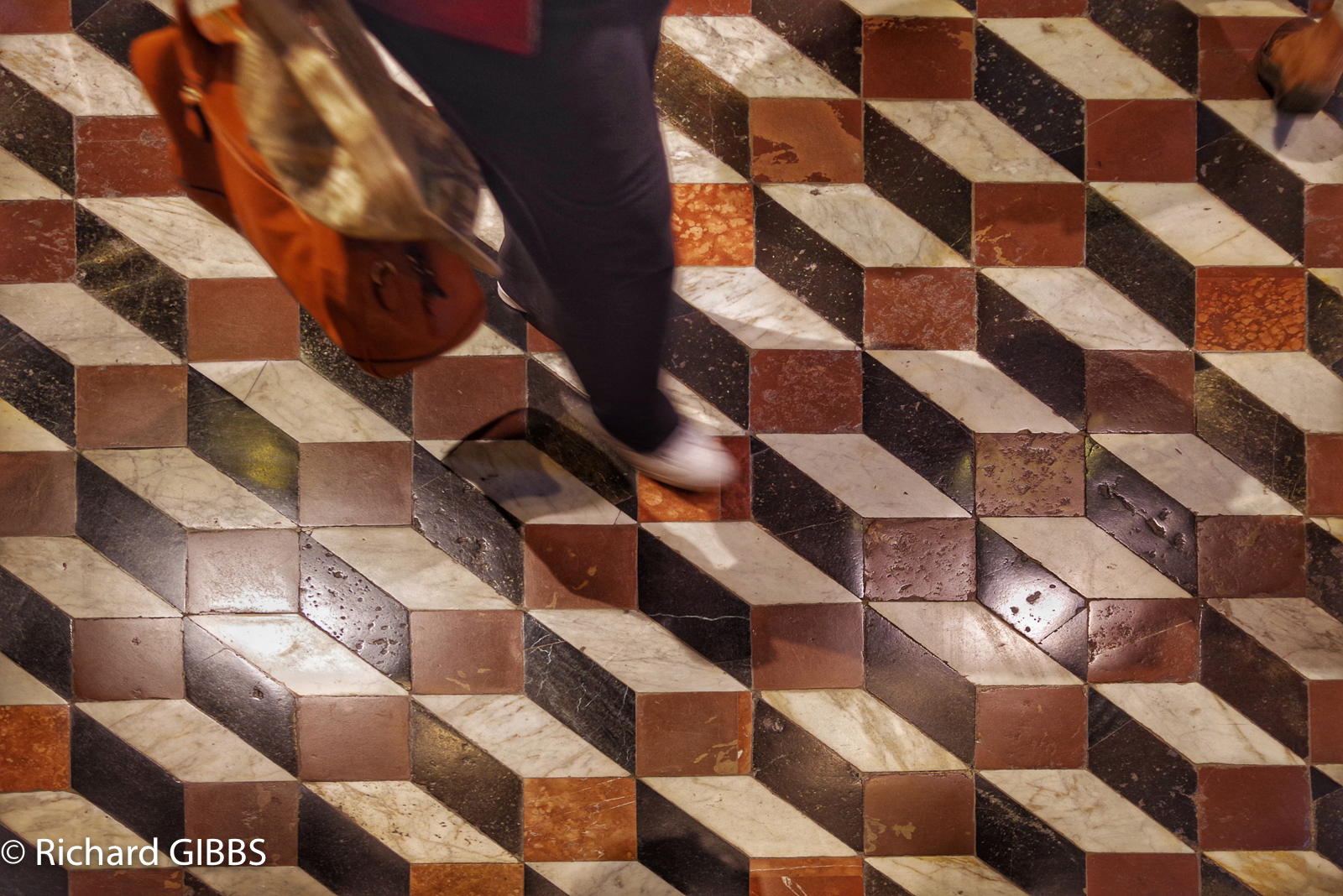 While outside rainfall glistened on the paving, and the candy-striped tower of the cathedral was reflected in the puddles:

A time to cast away stones, and a time to gather stones together; 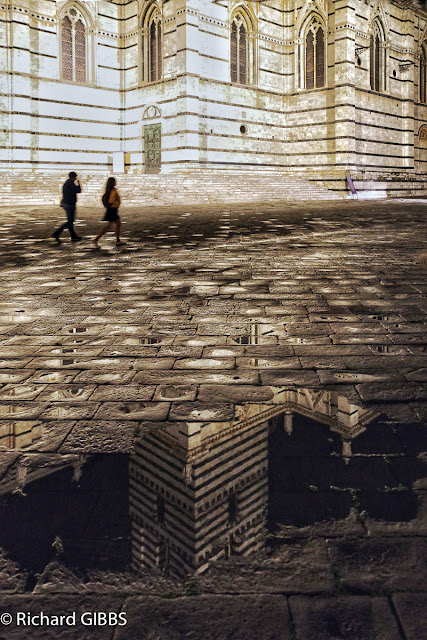 With my little tucked up in the quiet of the Albergo Chiusarelli, I chanced the damp deserted alleys and found myself back in the Trattoria Dino, which has changed little since it opened in 1974.... 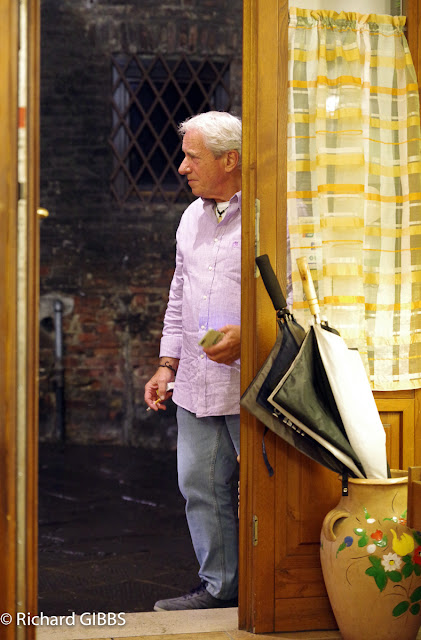 Where Coniglio in umido (rabbit stew) went down very nicely with a little local red wine.....


that every man should eat and drink, and enjoy the good of all his labour, it is the gift of God. 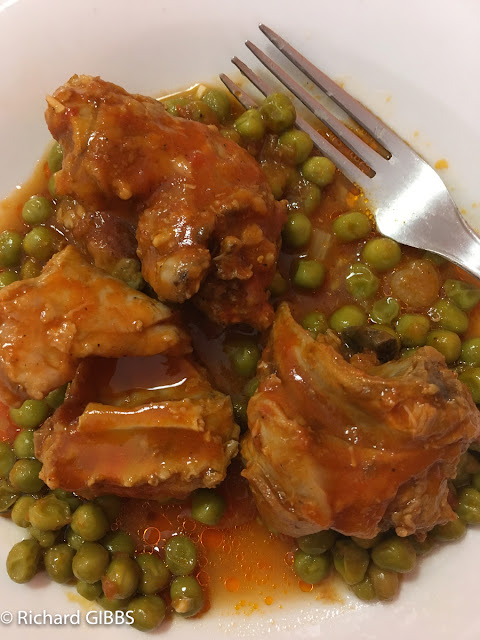 The morning broke stormy, and our road to Pisa was washed by cloudbursts, 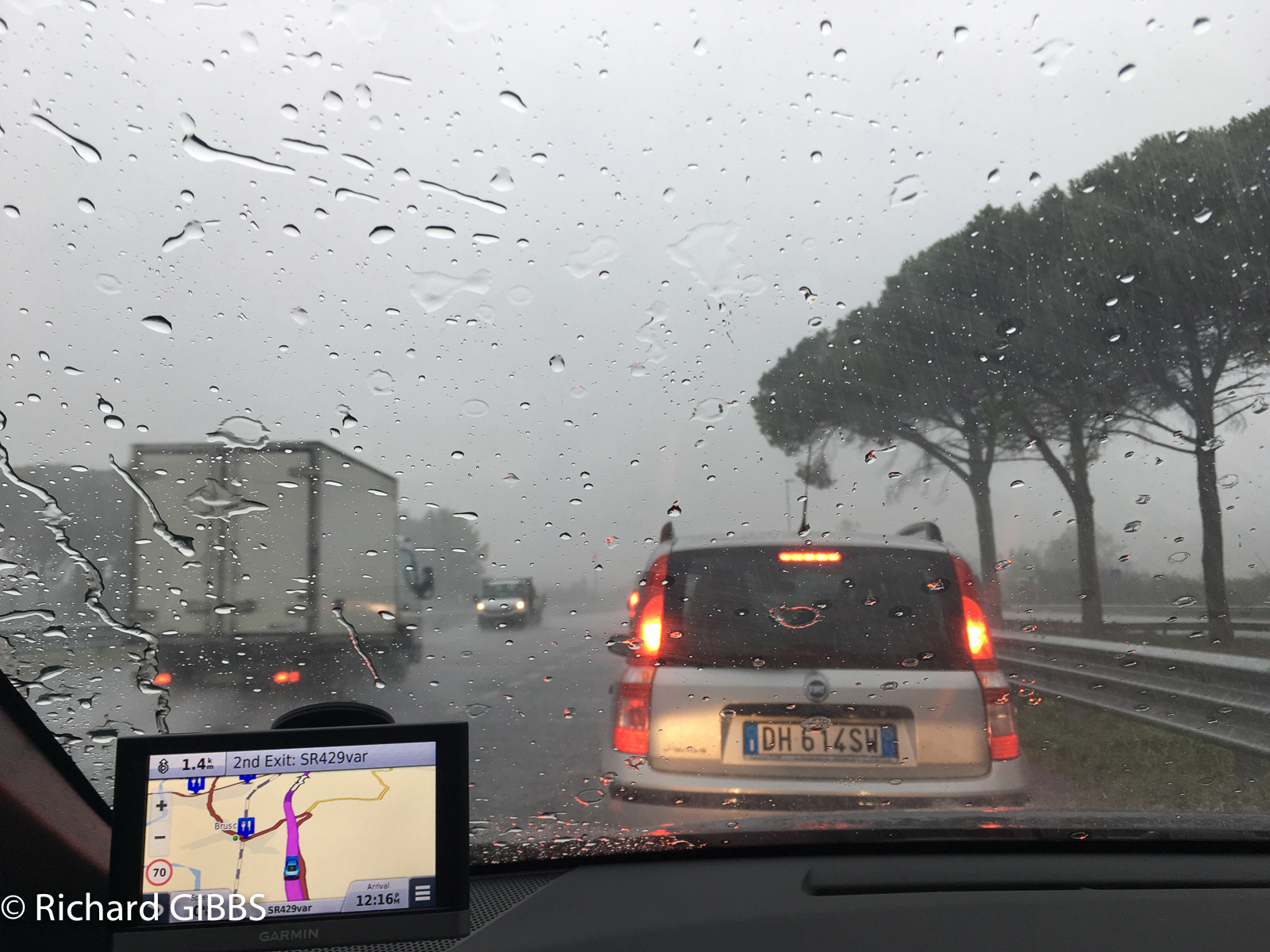 But we survived the flood, and lifted off away more or less on time, our September song sung to the last minute, our memories already fading, but our hearts full of friends..... 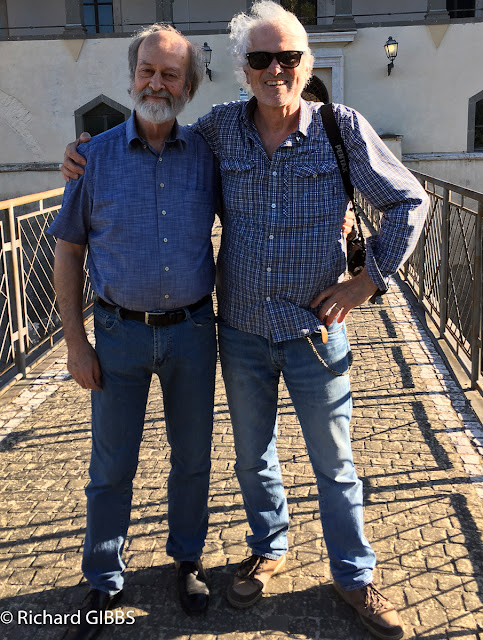 All go unto one place; all are of the dust, and all turn to dust again. 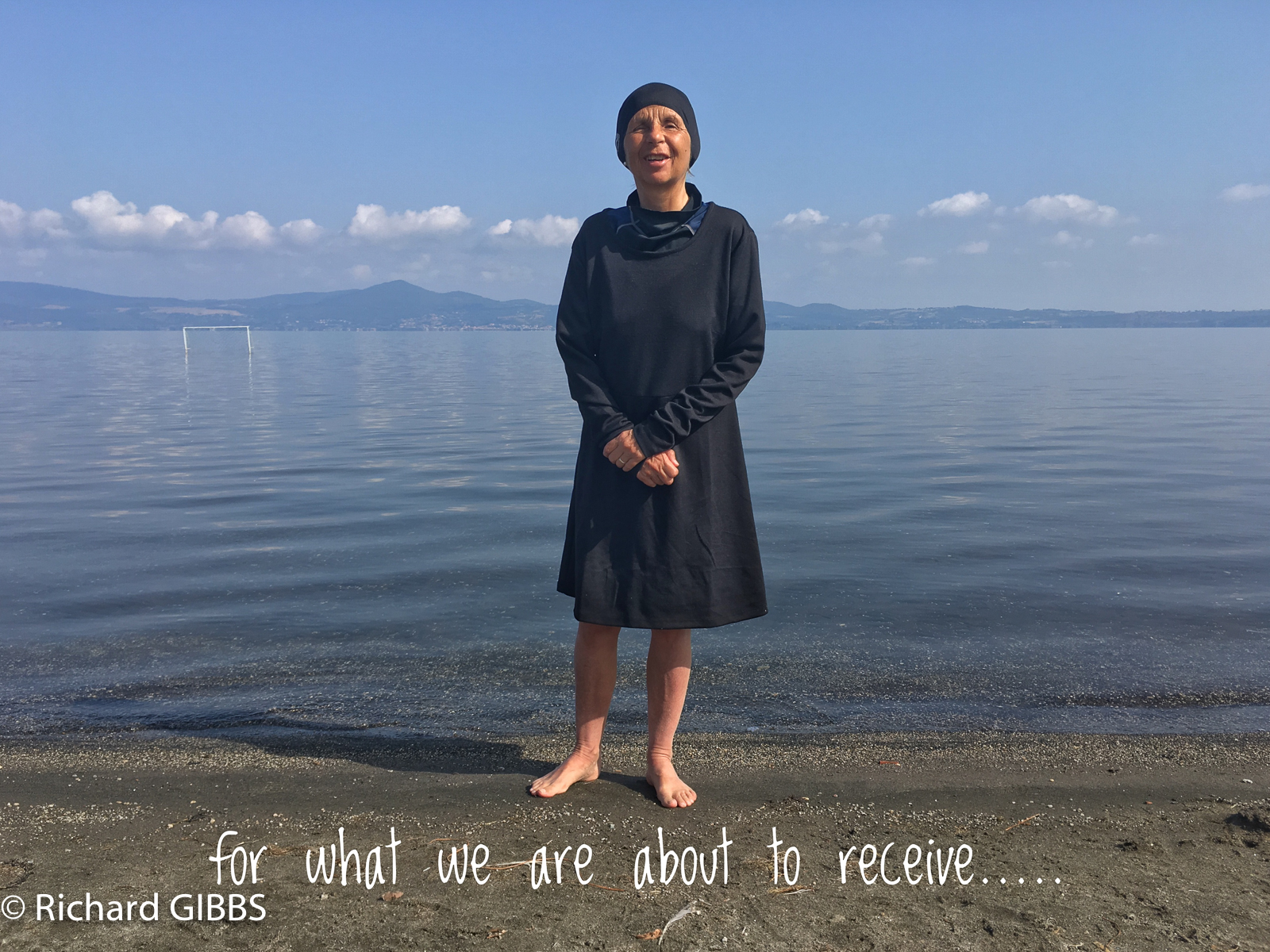 Oh, it's a long, long while from May to December
But the days grow short when you reach September
When the autumn weather turns the leaves to flame
One hasn't got time for the waiting game