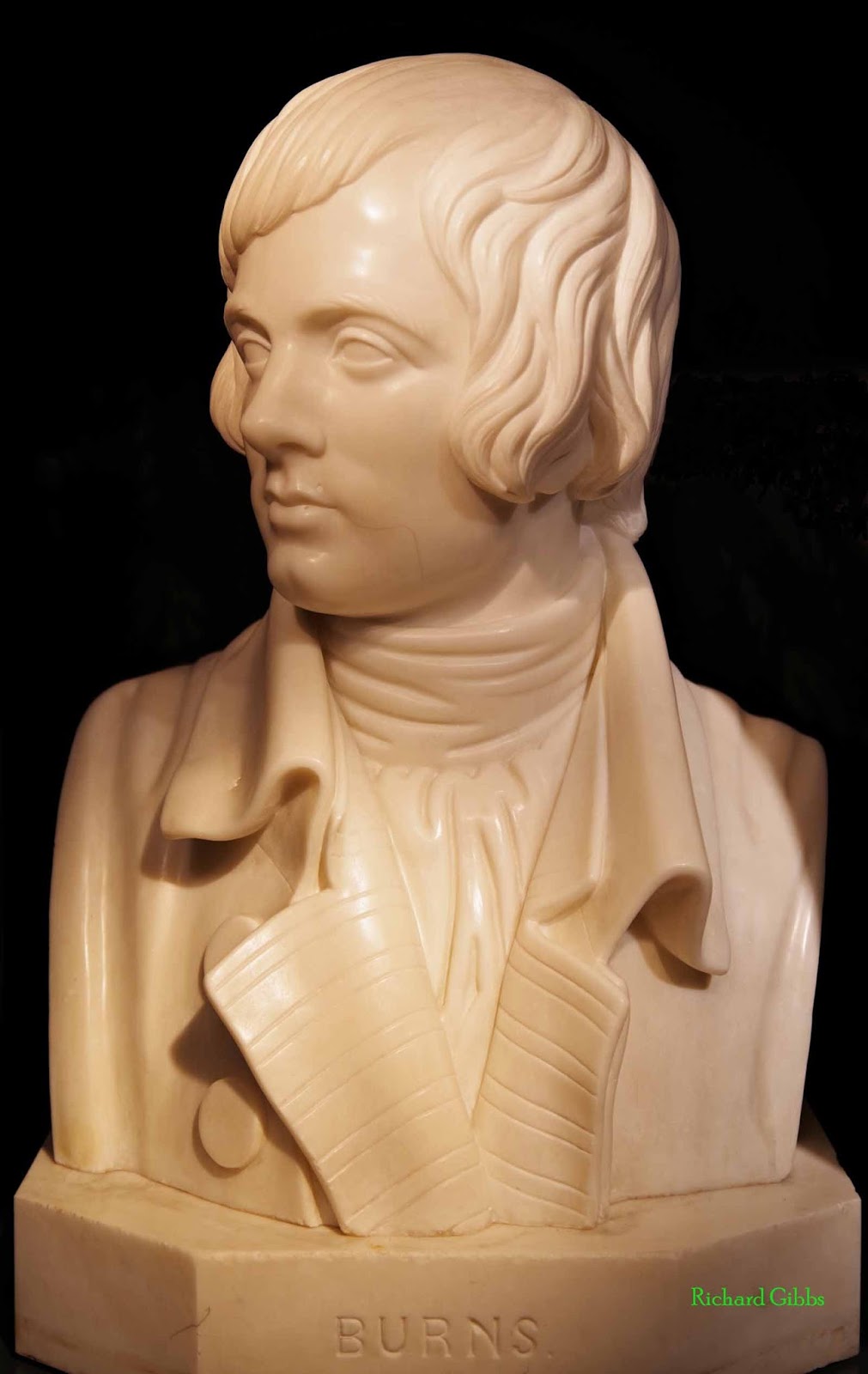 In June 1971, as an undergraduate at Lancaster University, I bought Barbara Goulding's unused copy of Poems and Songs of Robert Burns, even though the national poet of Scotland was not on my syllabus.  I must have looked at it, but I have to say that, until recently, the book has remained little thumbed.... 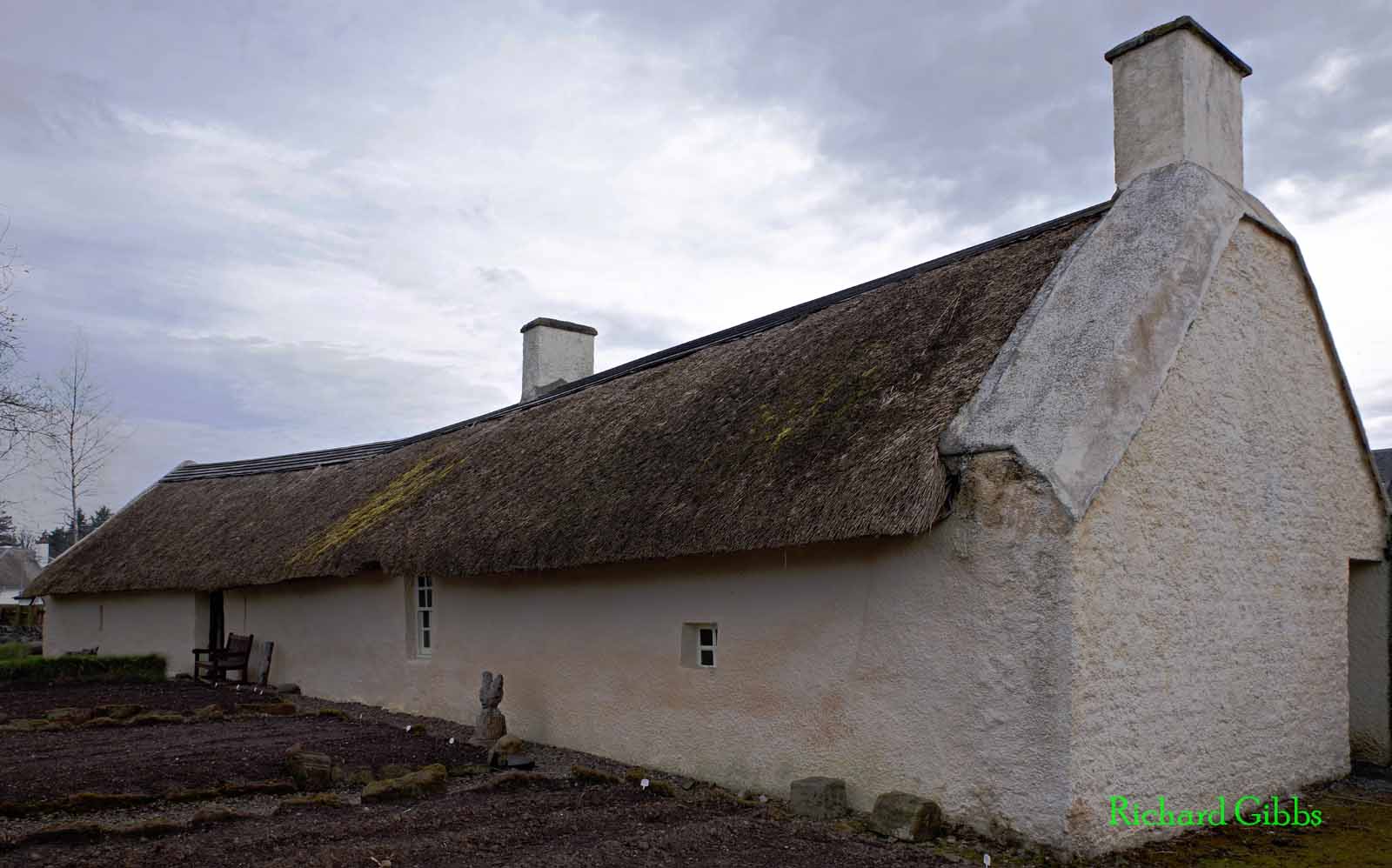 I guess I was attracted by a hazily understood reputation of the bard.  But neither then, nor when I returned to Lancaster in 1984 for a second degree, did I unravel the references to Poosie-Nansie, Souter Johnie, or Tam o' Shanter. 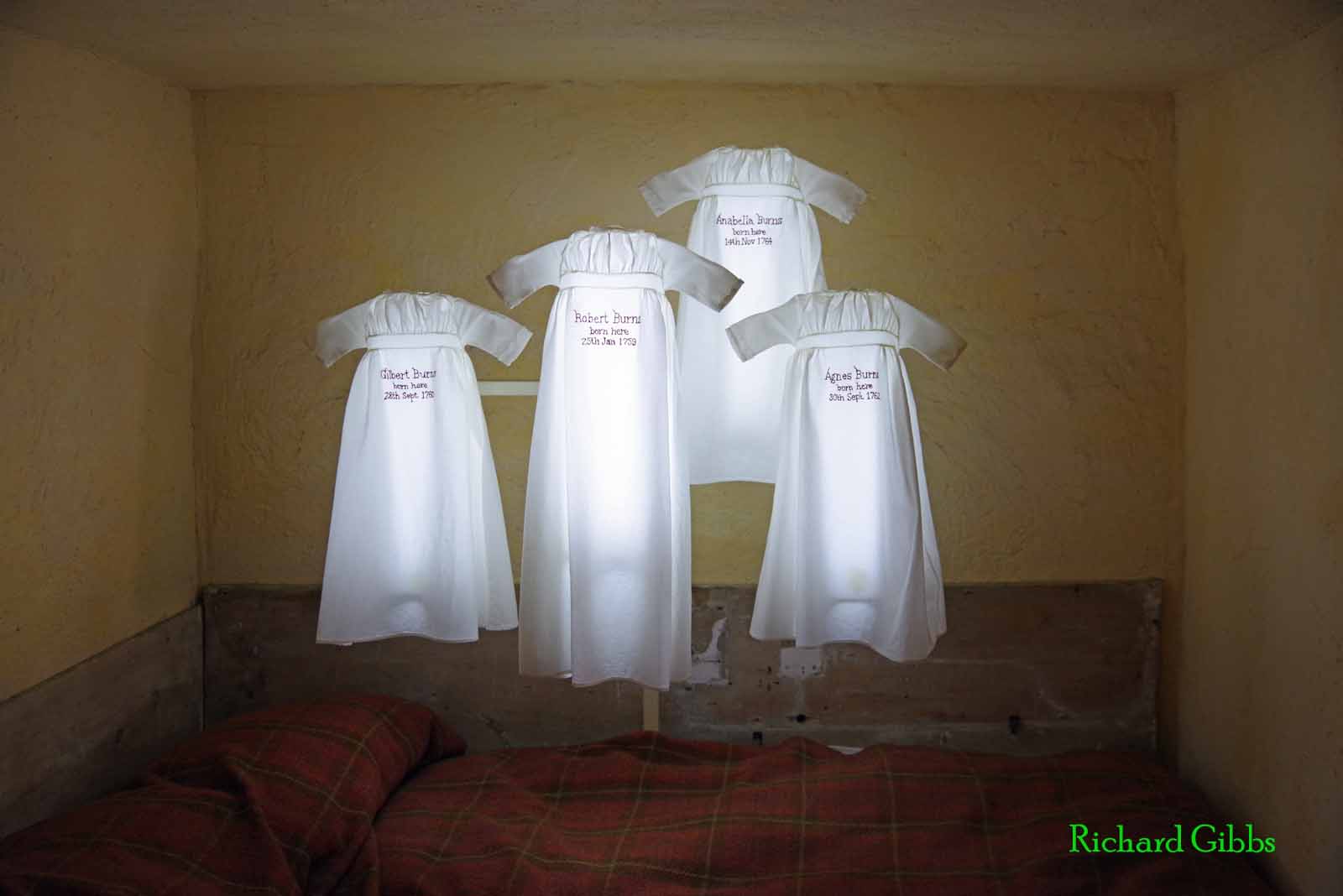 Robert Burns was born in a small cottage in Alloway, on the 25th January 1759, merely a day before Australia Day (and my birthday....) 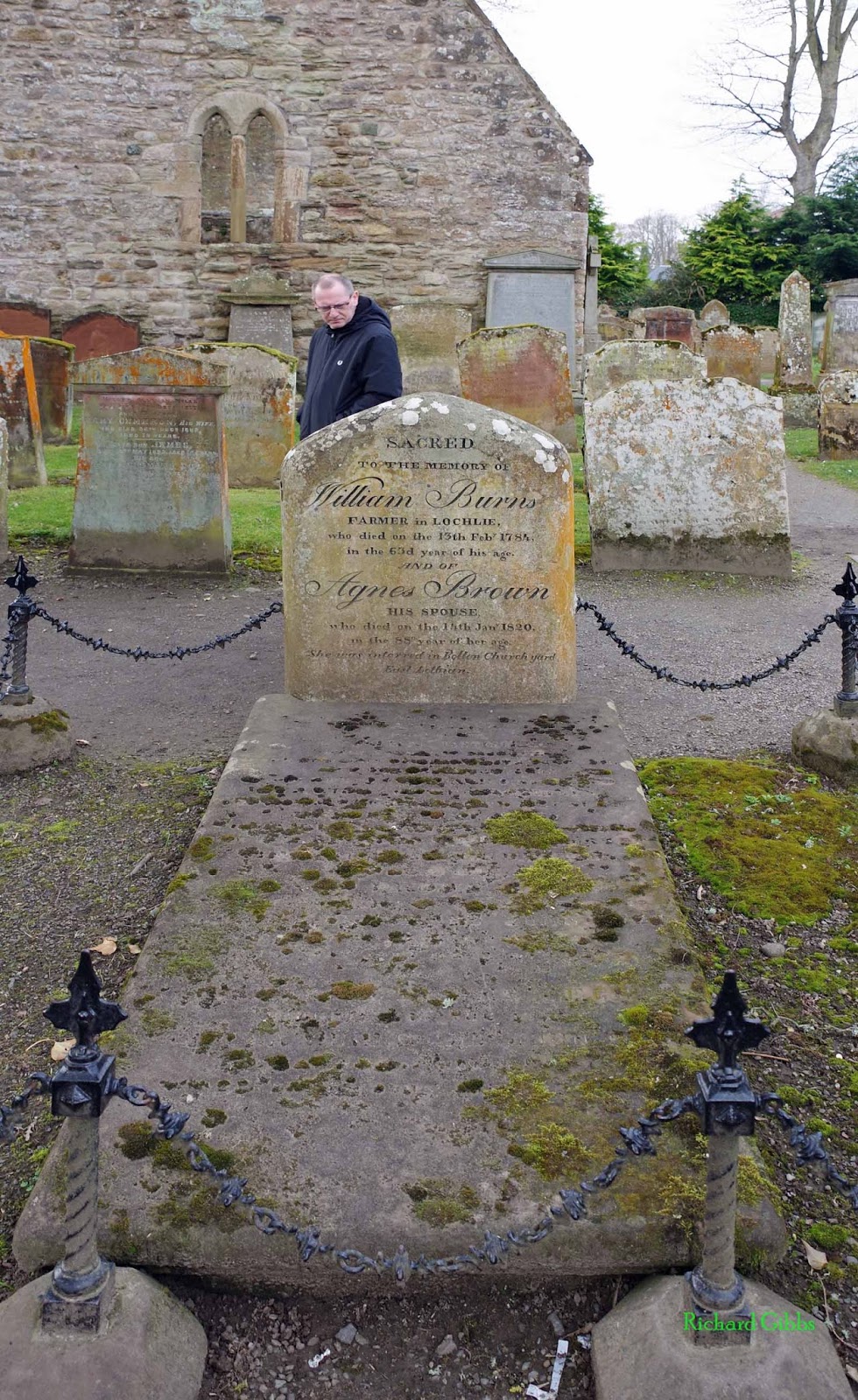 His father and mother are buried in the yard of Alloway Auld Kirk nearby, and, to paraphrase something I heard someone say recently, if they were alive today they would be turning in their graves to see the grandiose monument and magnificent museum dedicated to their eldest son, which are just a step away from the rough and ready cottage that William had built himself on a small parcel of land.... 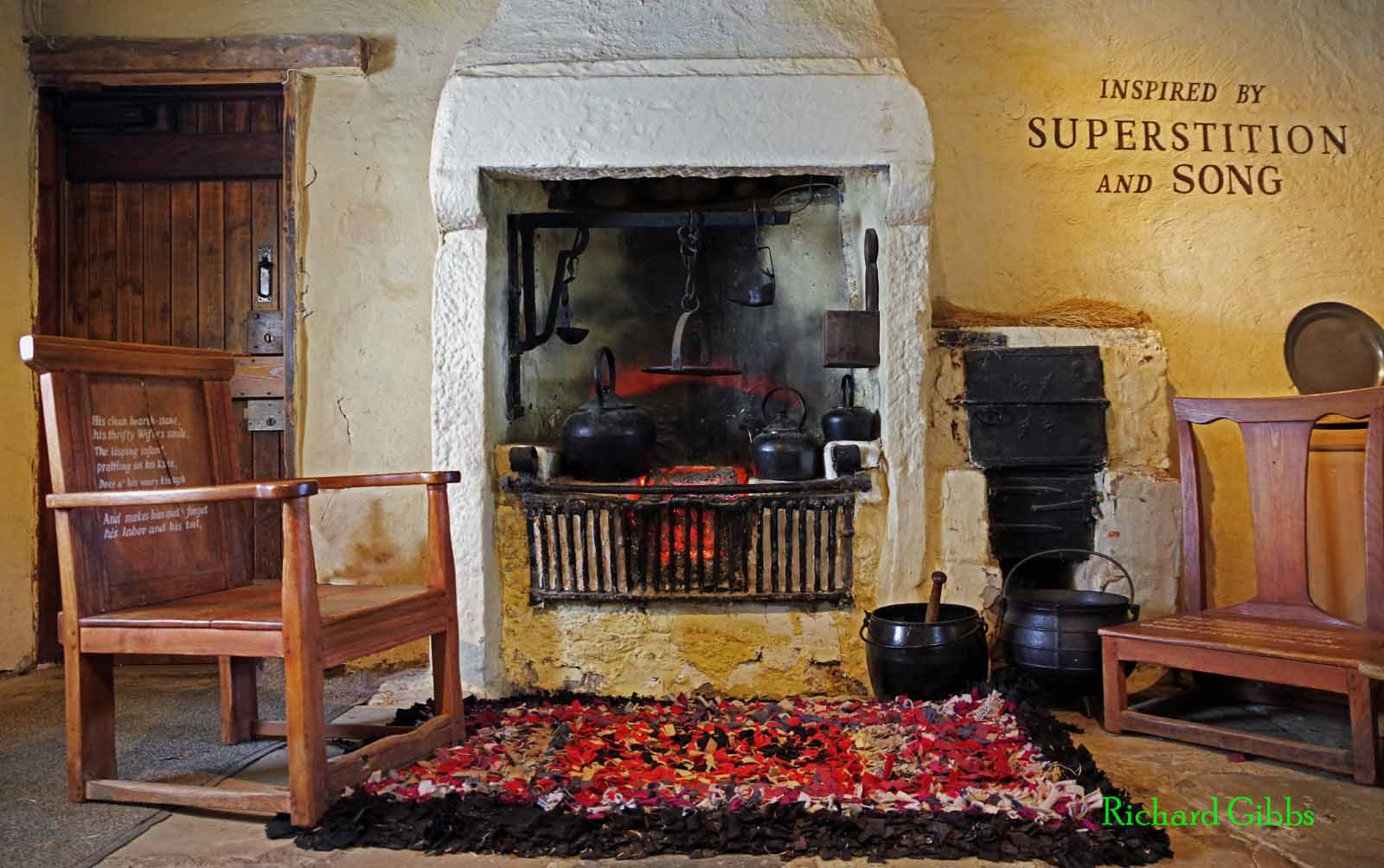 Even though the boy has parked his bike outside.... 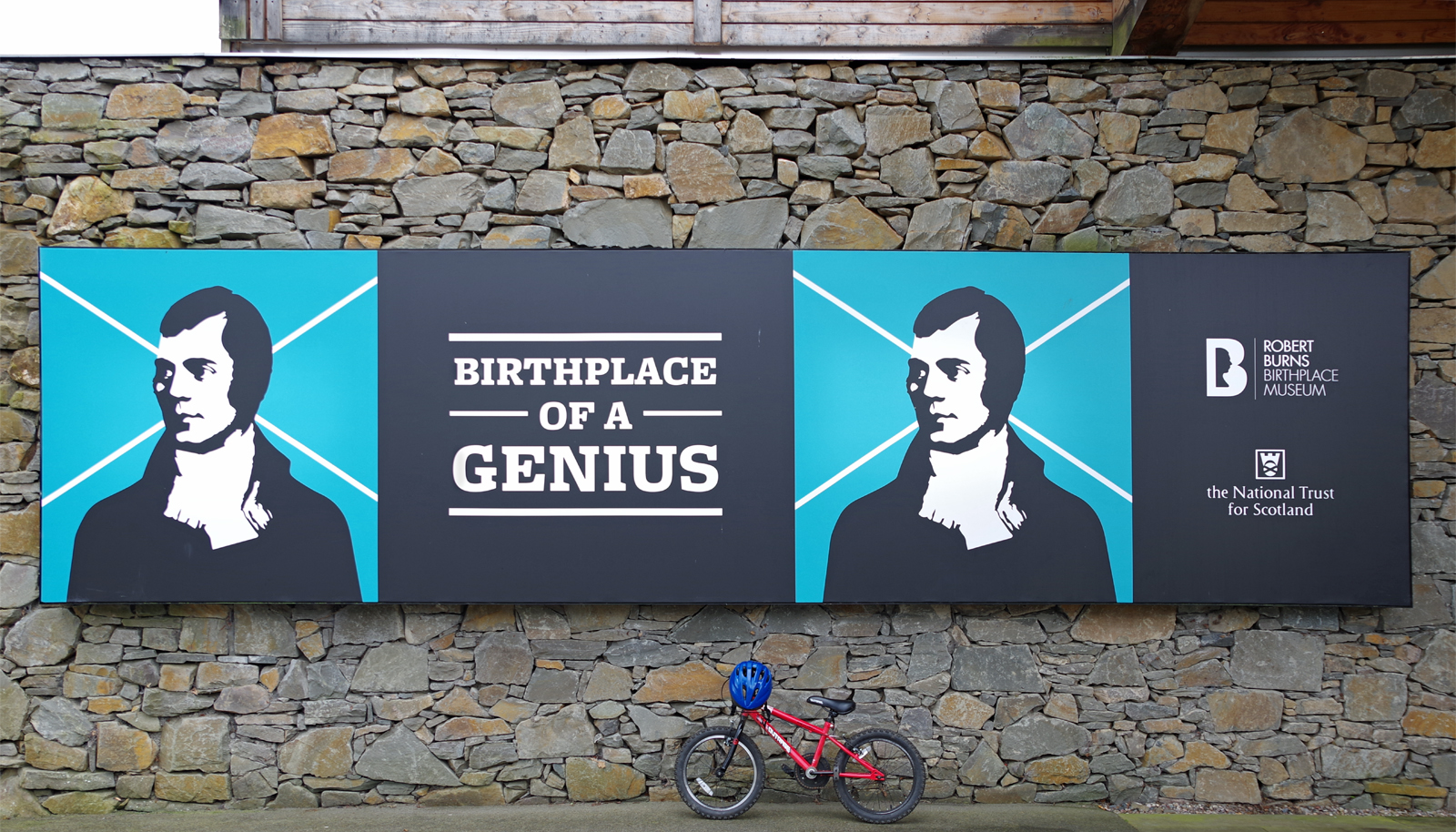 Robert's father, a stern calvinist, did his best for his children and, despite the rigours of farm life, he ensured that education was not overlooked.  Robert learned to read and write and was fluent in both English and Scots, though as he grew he may have had conflicting thoughts about learning...

'O Man! while in thy early years,
How prodigal of time!
Mis-spending all thy precious hours,
Thy glorious, youthful prime!'

Man was Made to Mourn 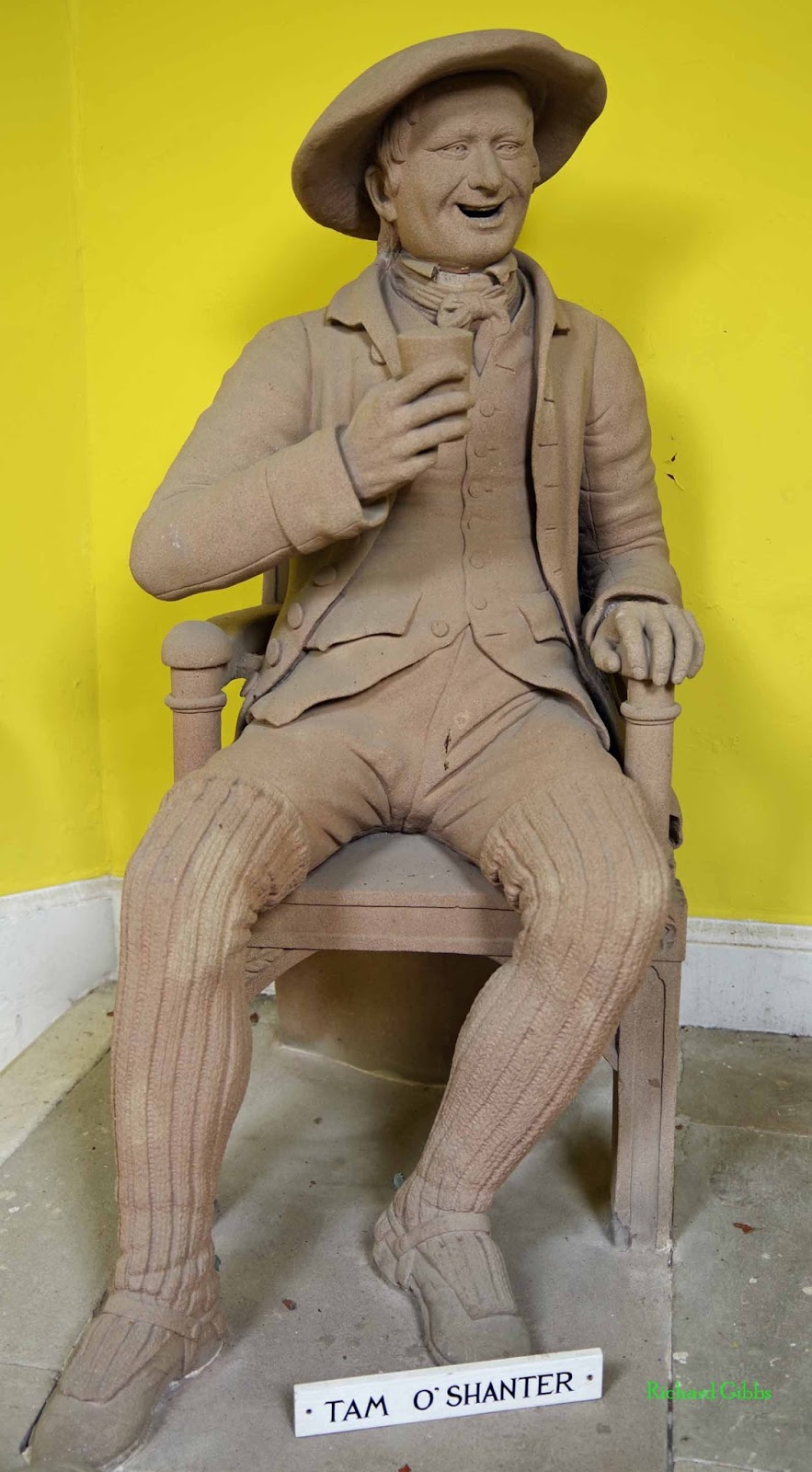 Robert and his brother Gilbert worked as ploughmen for their father, but also managed to form a debating society in Tarbolton which they called the Bachelors' Club.

At the age of 22, in 1781, he went to Irvine to learn how to dress flax, one of the crops his father was growing.  He was there for six months, and made the most of Templeton's bookshop, though at the same time he also became acquainted with whisky and women.... 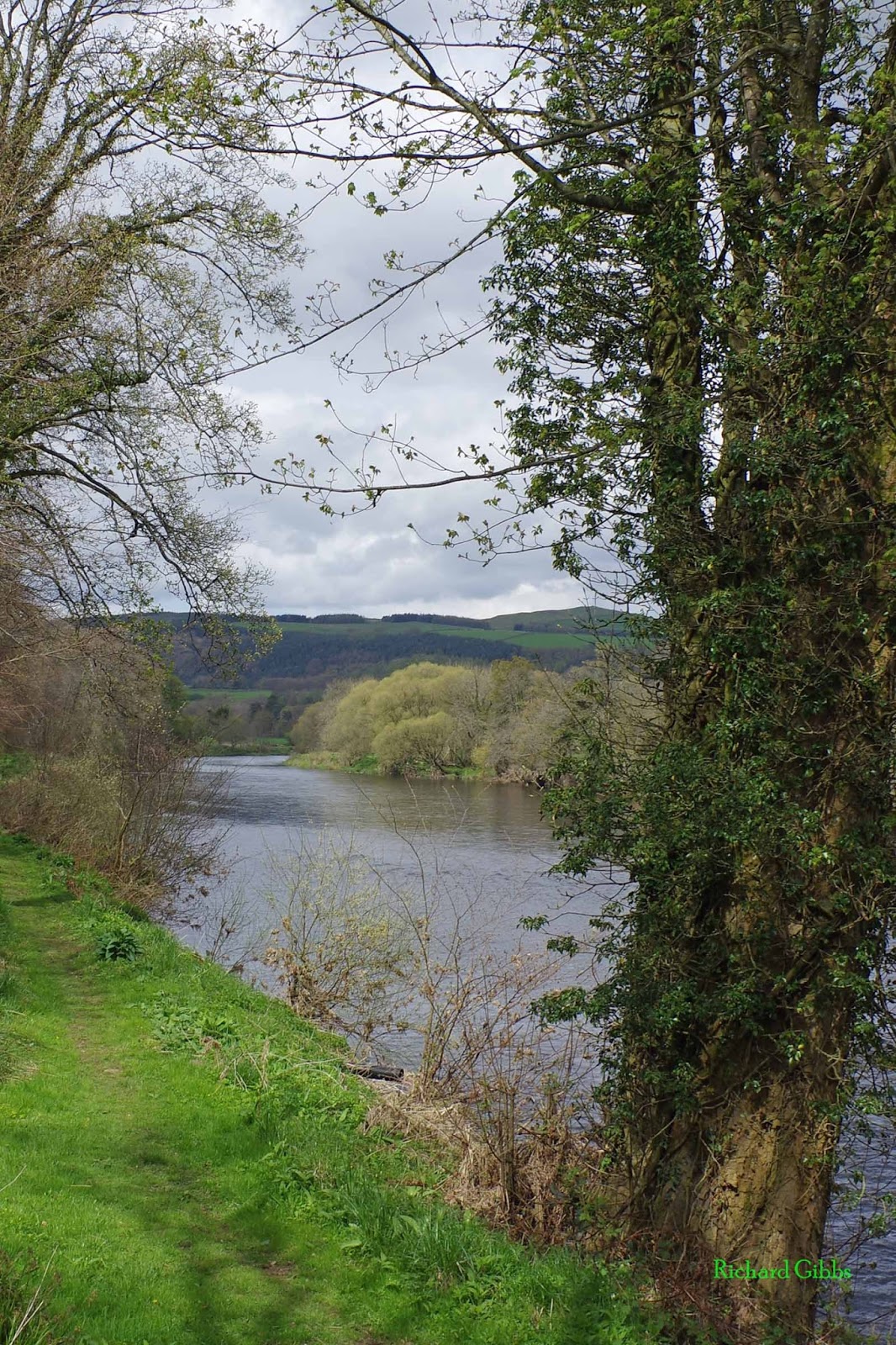 After their father's death in 1784, Robert and Gilbert took on the lease of a farm in Mauchline.  Robert also fathered a child which, as he didn't marry the mother, he brought into the household.... one of fourteen children he acknowledged.....

About the same time he met another local girl, Jean Amour, who, early in 1786 became pregnant, though in the same year he was courting one Highland Mary... unfortunately, however, by October Mary was dead.

On July 31st 1786 John Wilson of Kilmarnock printed 600 copies of Scottish Poems by Robert Burns, which became an overnight success.  On the back of this, and without care for Jean Armour who had given birth to twins, Robert set out for Edinburgh in November of that year. 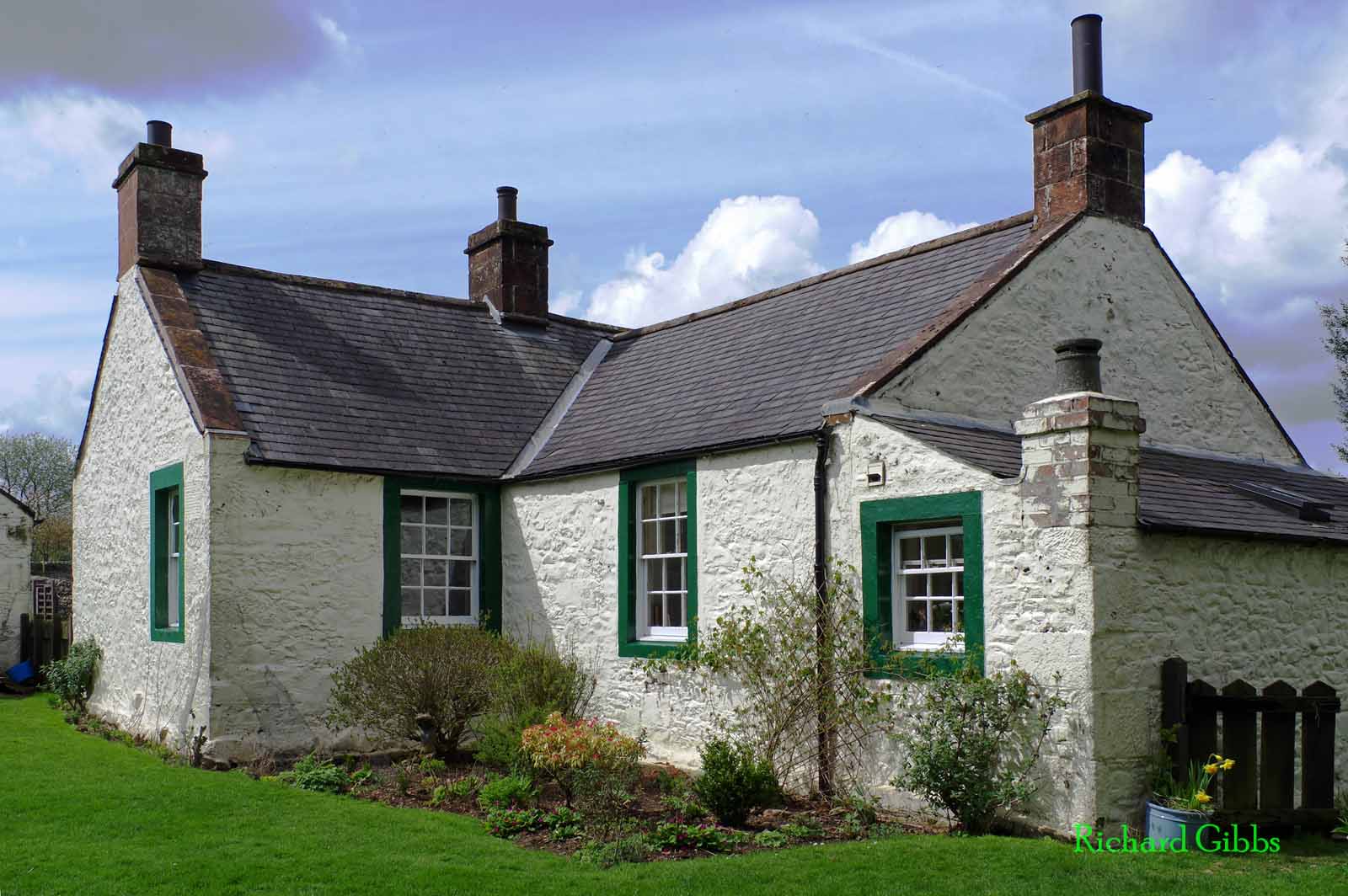 In Edinburgh Burns was a hit.  The Ploughman Poet charmed and intrigued society, and on 21st April 1787 the First Edinburgh Edition of his poems was published - and 3000 copies were printed.

With glowing eyes and a steady gaze, as well as a captivating voice, Burns was irresistible, and affairs and passionate friendships ensued.  However he didn't stay put in the city - he made tours of the Border counties and of the Highlands - and before too long he felt the need to find a job, and to provide for Jean Armour, who had managed to produce a second set of twins by Robert, although both of these swiftly died.

But, in 1787, Burns married Jean, and, in June, he set up home at Ellisland Farm on the banks of the Nith, near Dumfries, where, in December, the house was finished and he was joined by Jean. 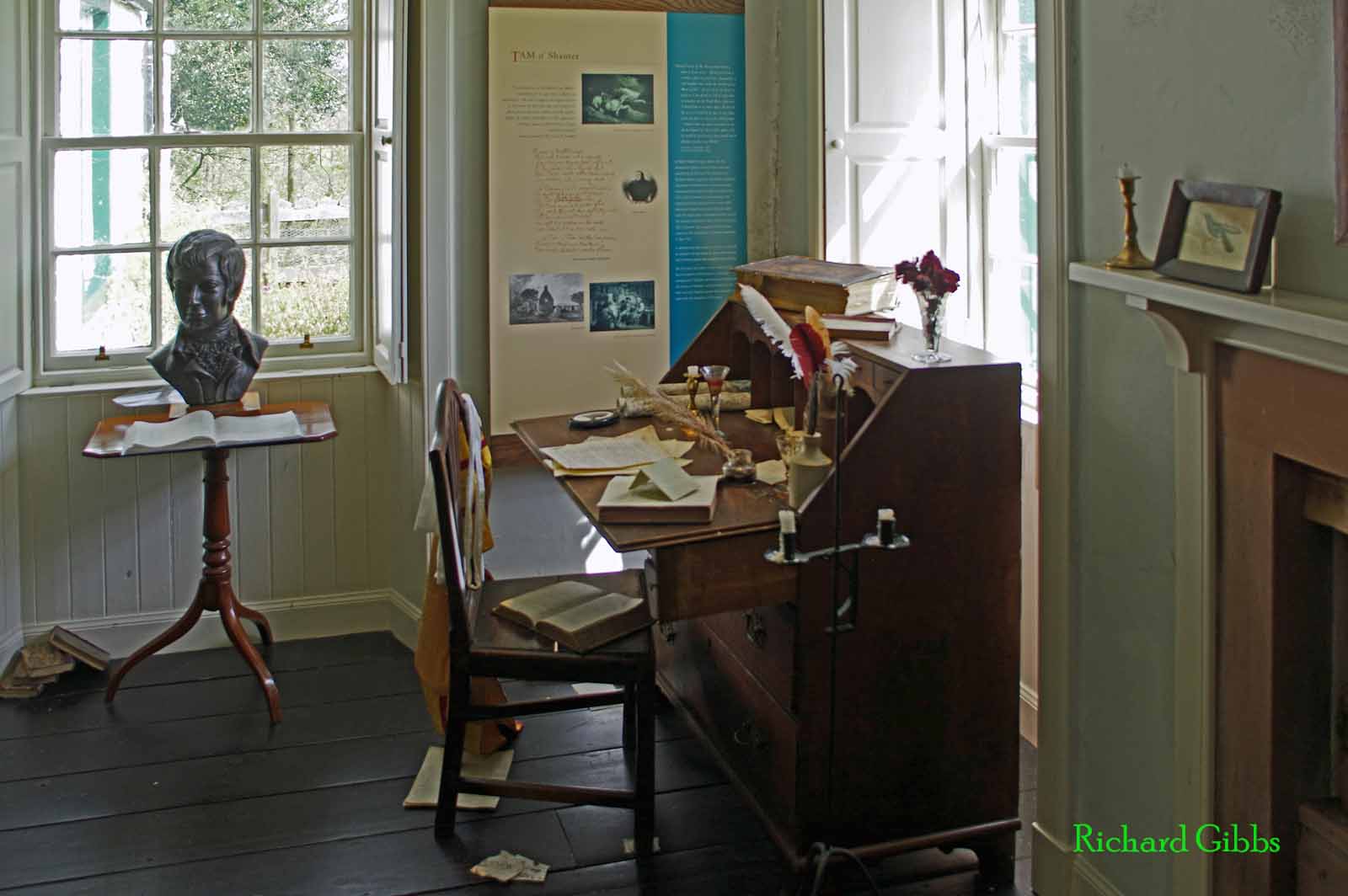 Here, amidst family life, the difficulties of a poor agricultural existence (Robert switched from arable to dairy after a year) and the training he underwent to become an exciseman, Burns wrote some of his best loved verse, including the rollicking yarn, Tam o' Shanter, a tale that may have had some personal experience behind it..... 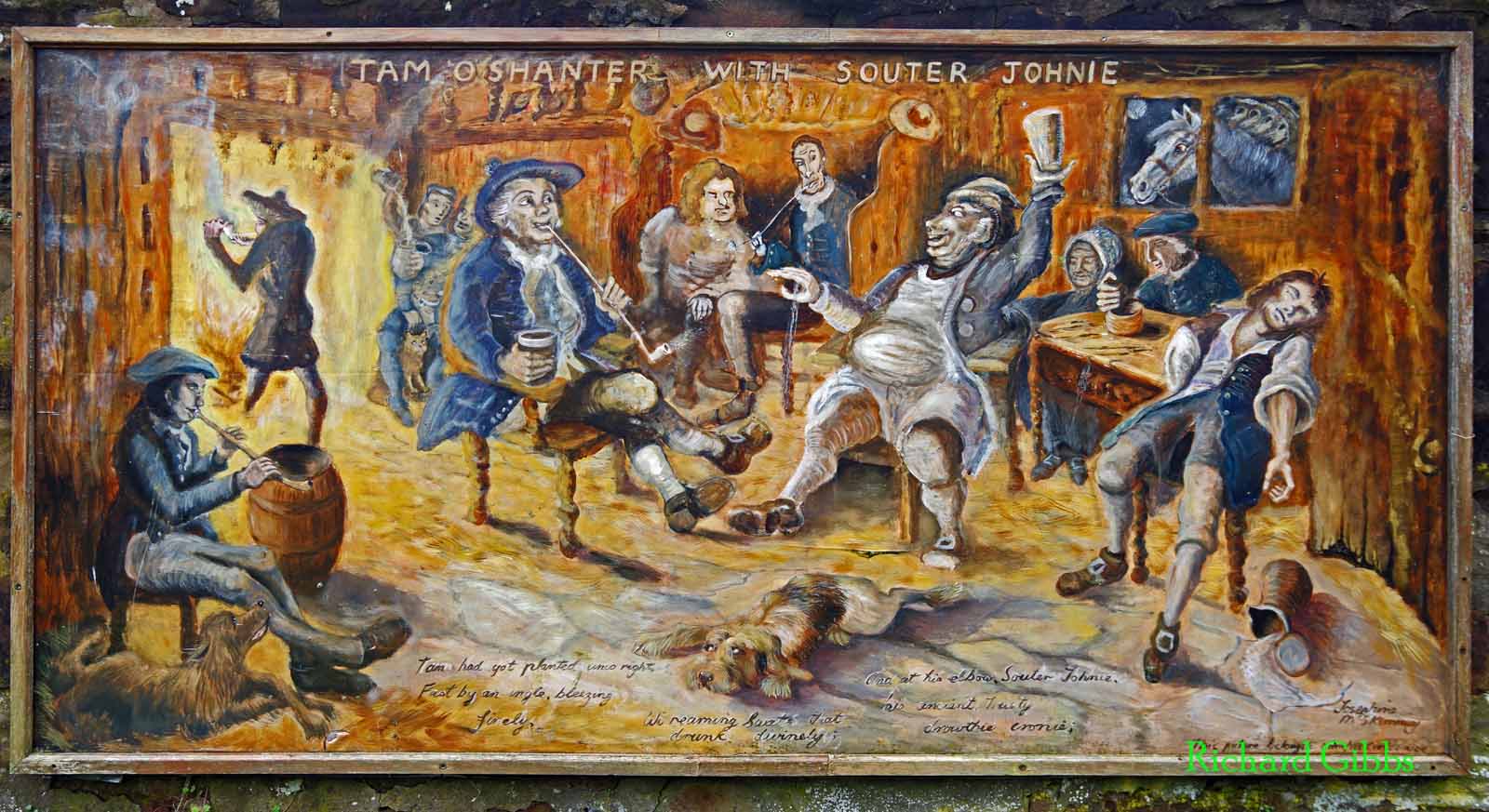 
You seize the flow'r, its bloom is shed; 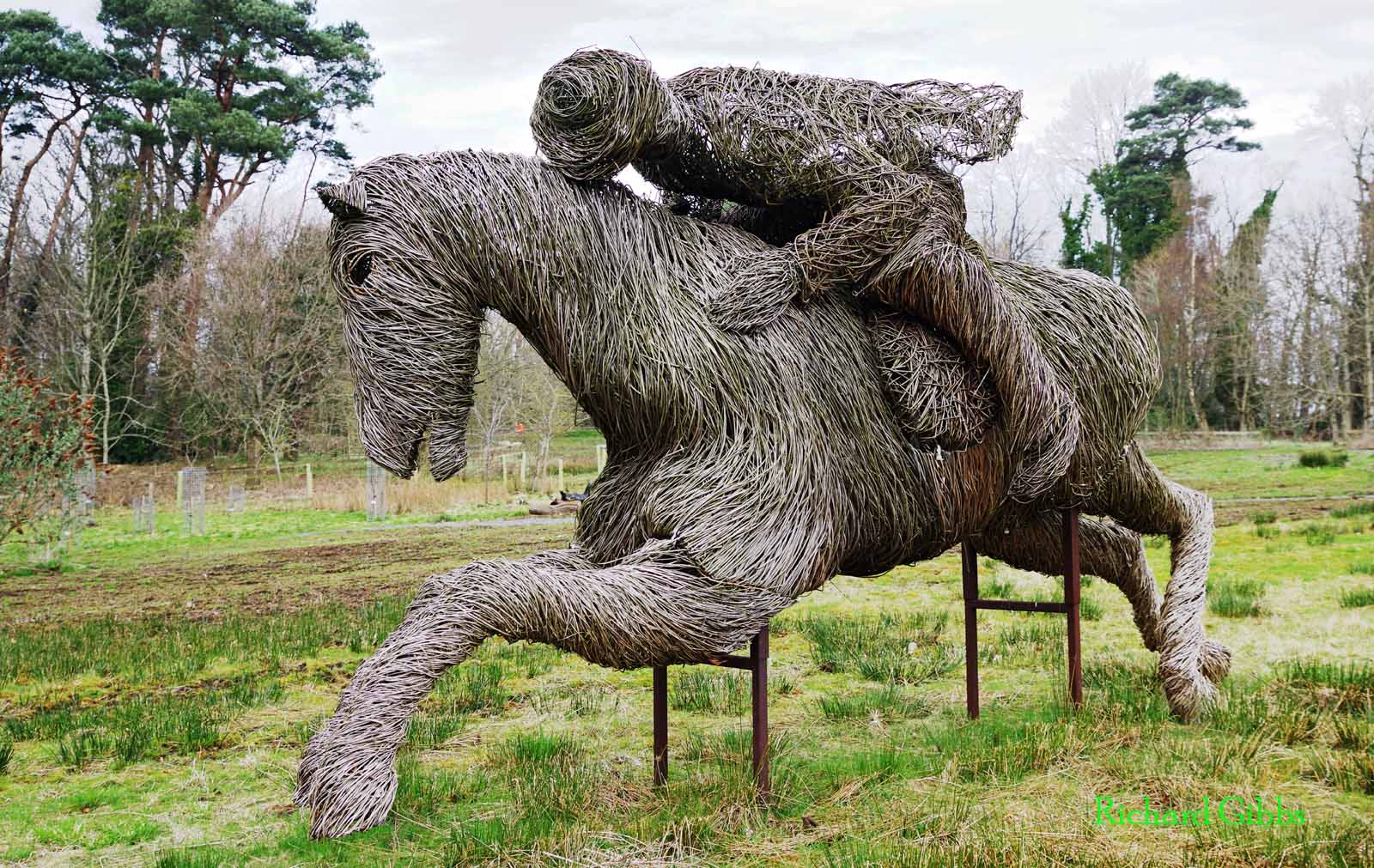 The tale ends as drunken Tam is carried across the keystone of the Brig o' Doon by his faithful mare, Maggie, chased by a howling band of warlocks and witches, who grab at Maggie's tail:

The carlin claught her by the rump,
And left poor Maggie scarce a stump. 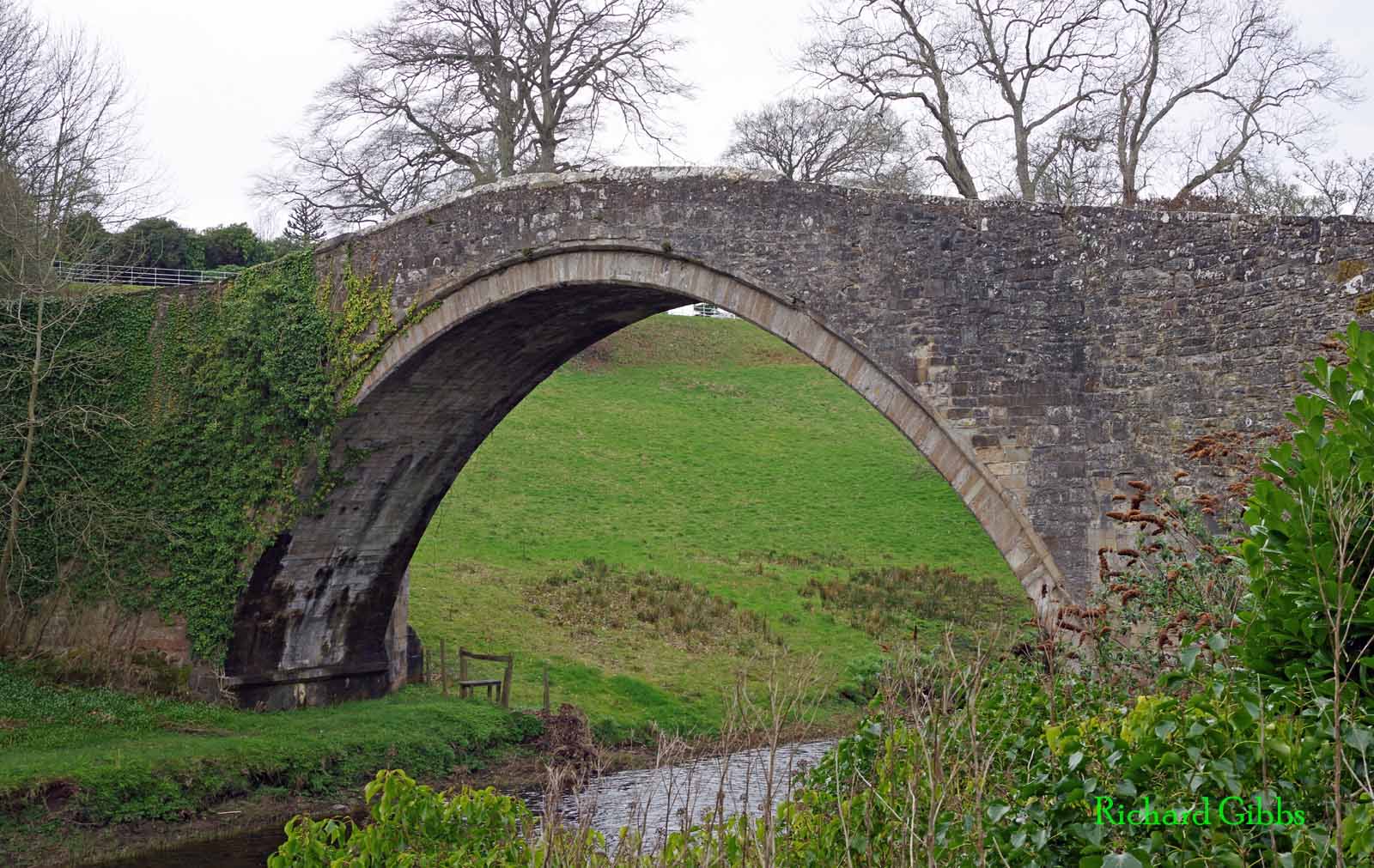 But, as 'twas well known, the devil's brood dare not cross a running stream, so.... 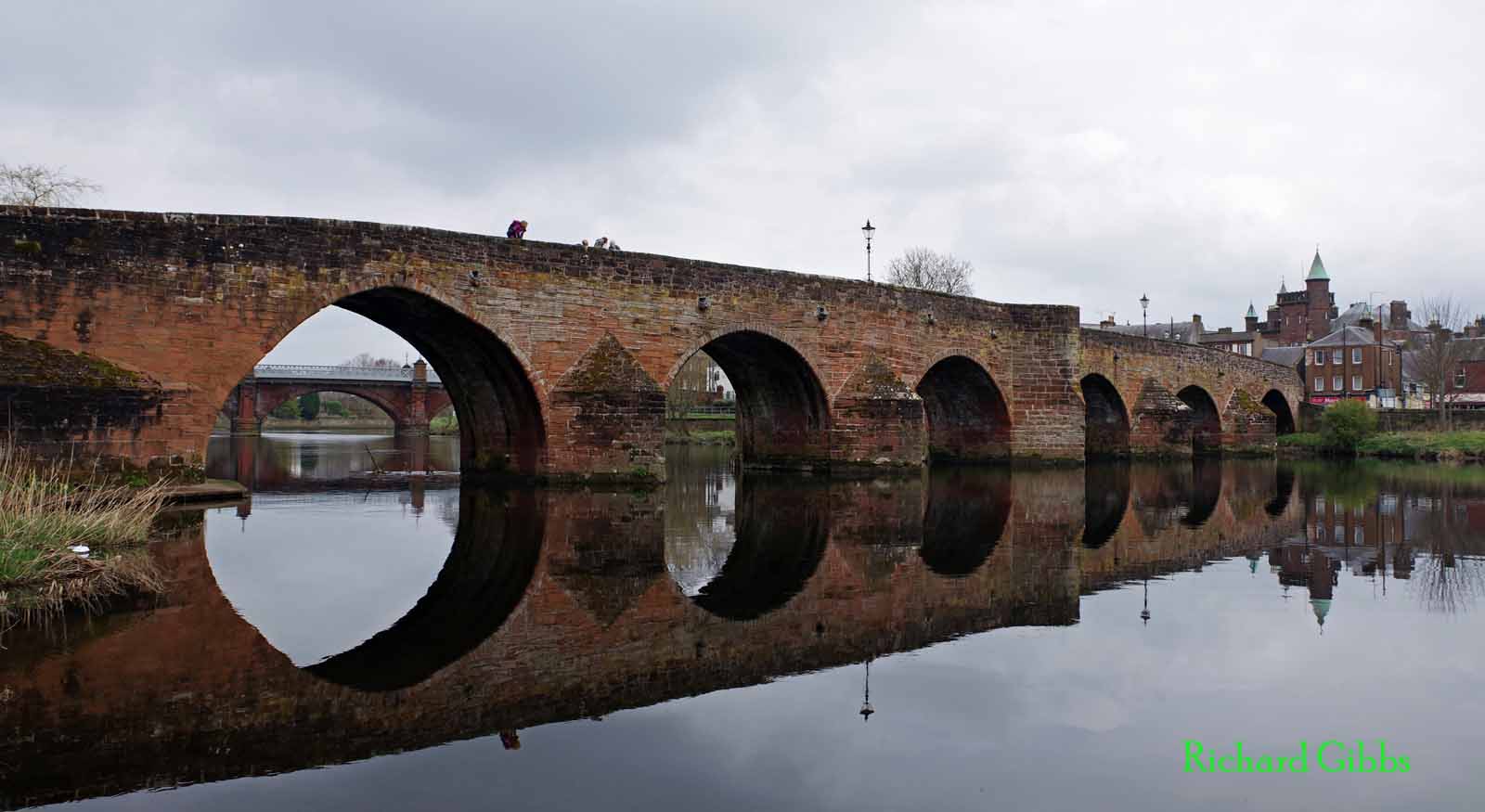 And this was not the only example of Robert's care for animals.  On Seeing A wounded Hare Limp By Me Which A Fellow Had Just Shot At is another of his Ellisland poems, composed by the winding river Nith...

And many a reluctant GCSE pupil will know To A Mouse (On Turning Her Up In Her Nest With The Plough, November 1785): 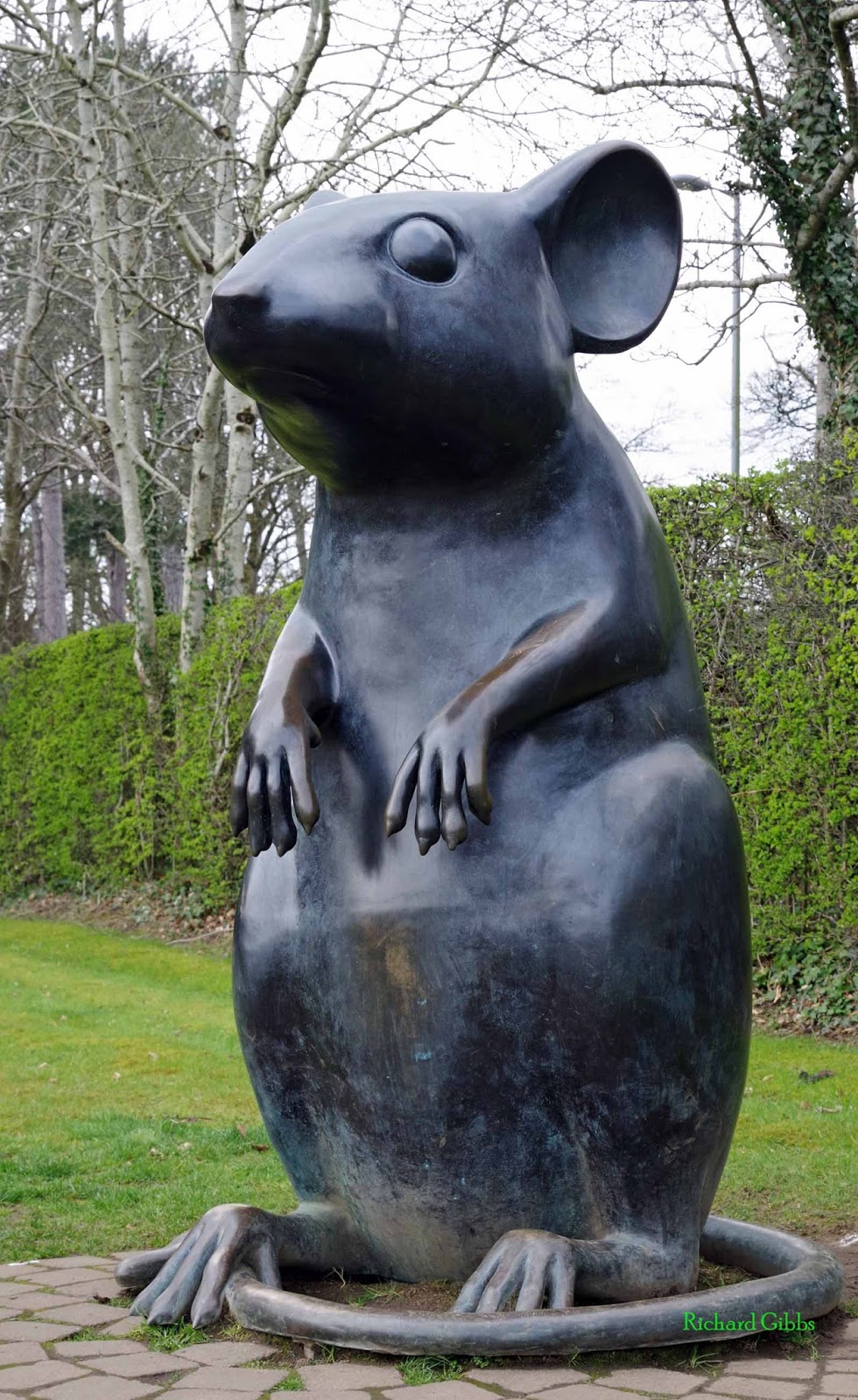 If only for the lines:

But Mousie, thou art no thy lane,
In proving foresight may be vain:
The best-laid schemes o' mice and men
Gang aft agley,
An' lea'e us nought but grief an' pain,
For promis'd joy! 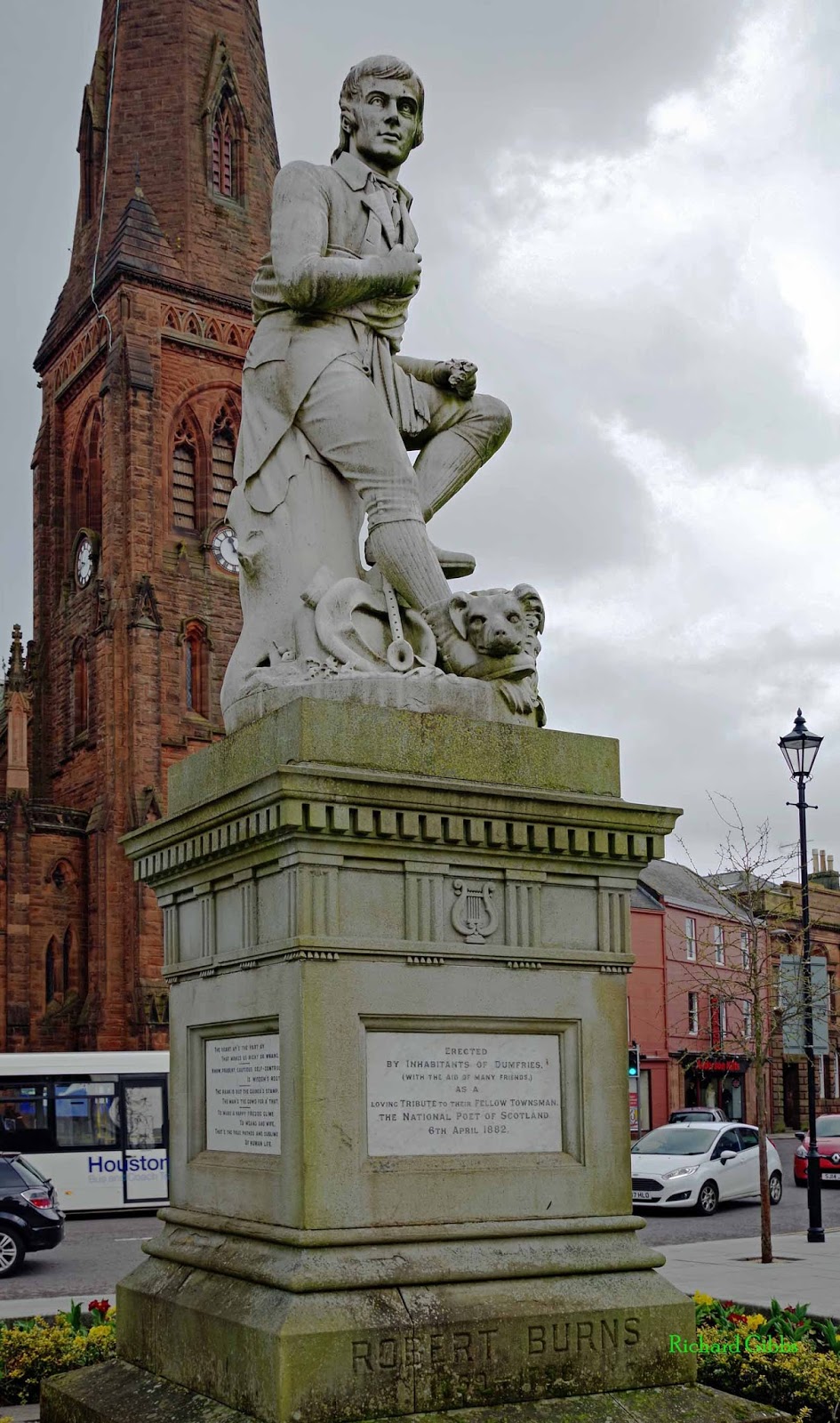 And so to Dumfries, where, after three years of struggling with the land, Burns moved to become a member of the First or Port Division of the Dumfries Excise, and lived with his family at 11 Bank Street, now preserved as a museum and memorial to the poet. 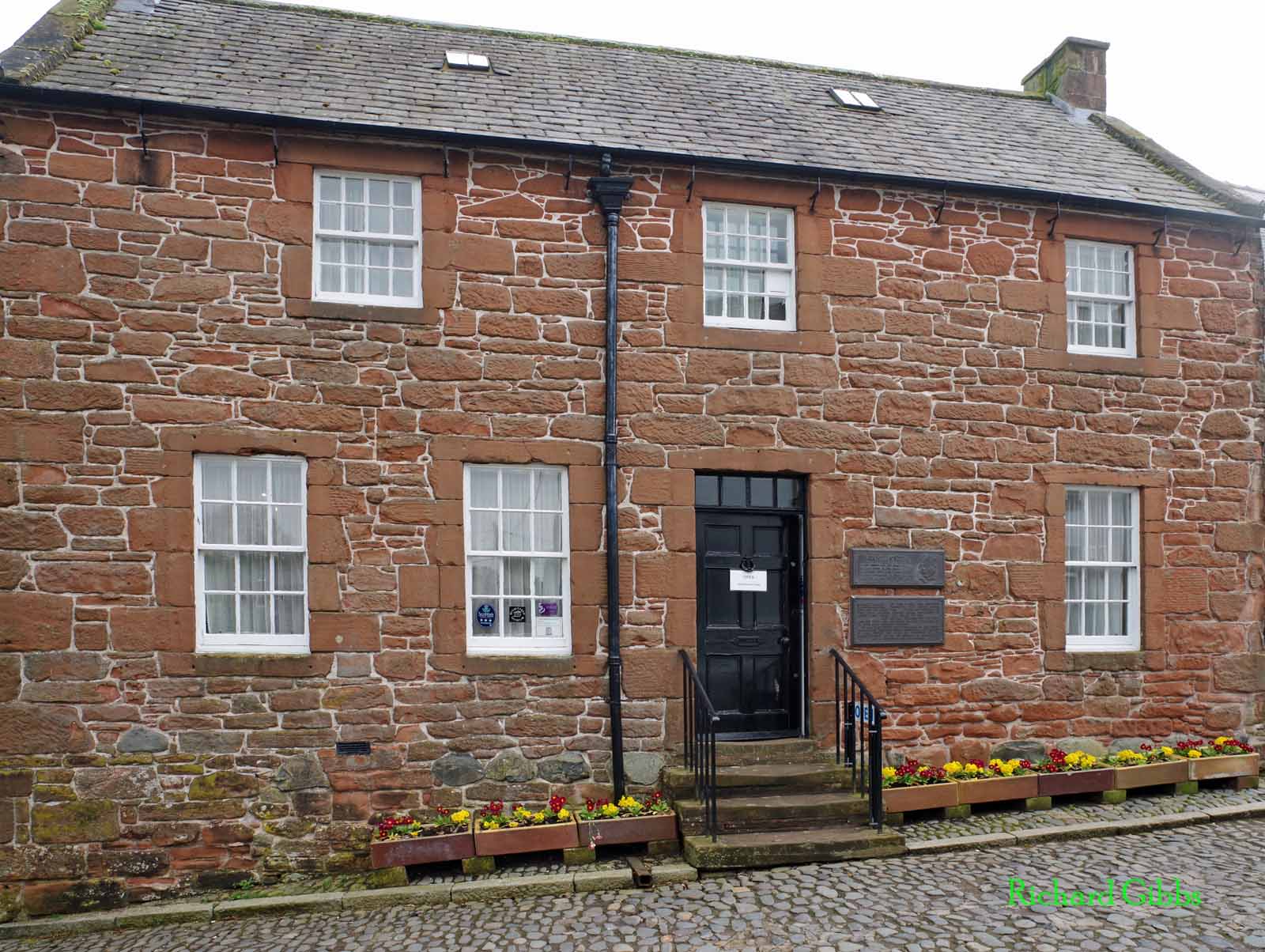 And it is here that I enter the University of the Third Age, inspired by Burns to the third degree....  I find, amongst the articles on show or for sale, a copy of Eddi Reader's deluxe edition of the Songs of Robert Burns.  Eddi was born in Glasgow though her family later relocated to Irvine, where Burns had learnt to dress flax.  She became a musician, travelling round Europe and then settling in London for a while, where she sang with Annie Lennox, and then topped the charts with Fairground Attraction, whose drummer was my old pal Roy Dodds, who spent many a mispent moment with me, Joe, Ben et al in The Festival Hole, infamous club in 1960's Berkhamsted.....

Since London Eddi's career has taken her around the world, including to Hollywood, and she is currently on tour in the UK.

It is the Robert Burns album that inspires me now, however.  It was recorded with some of the finest folk musicians, including Roy on percussion, and also with the Royal Scottish National Orchestra.  It was premiered at the Glasgow Royal Concert Hall as part of the Celtic Connections Festival in January 2003, but released as the Deluxe edition in 2009.  The arrangements are beautiful, but it is Eddi's hauntingly beautiful voice that cuts across the centuries and breathes the words into living thoughts, wild birds in the treetops and the wind.... Robert Burns lived a relatively short life, but he made his mark, and his verses still inspire and console over two hundred years after his death.  I am only sorry I didn't look more into the book I bought all those long years ago....

So, to make up for lost time, and to commune a little with the soul of the departed bard, I pay my respects at his mausoleum in St Michael's churchyard..... 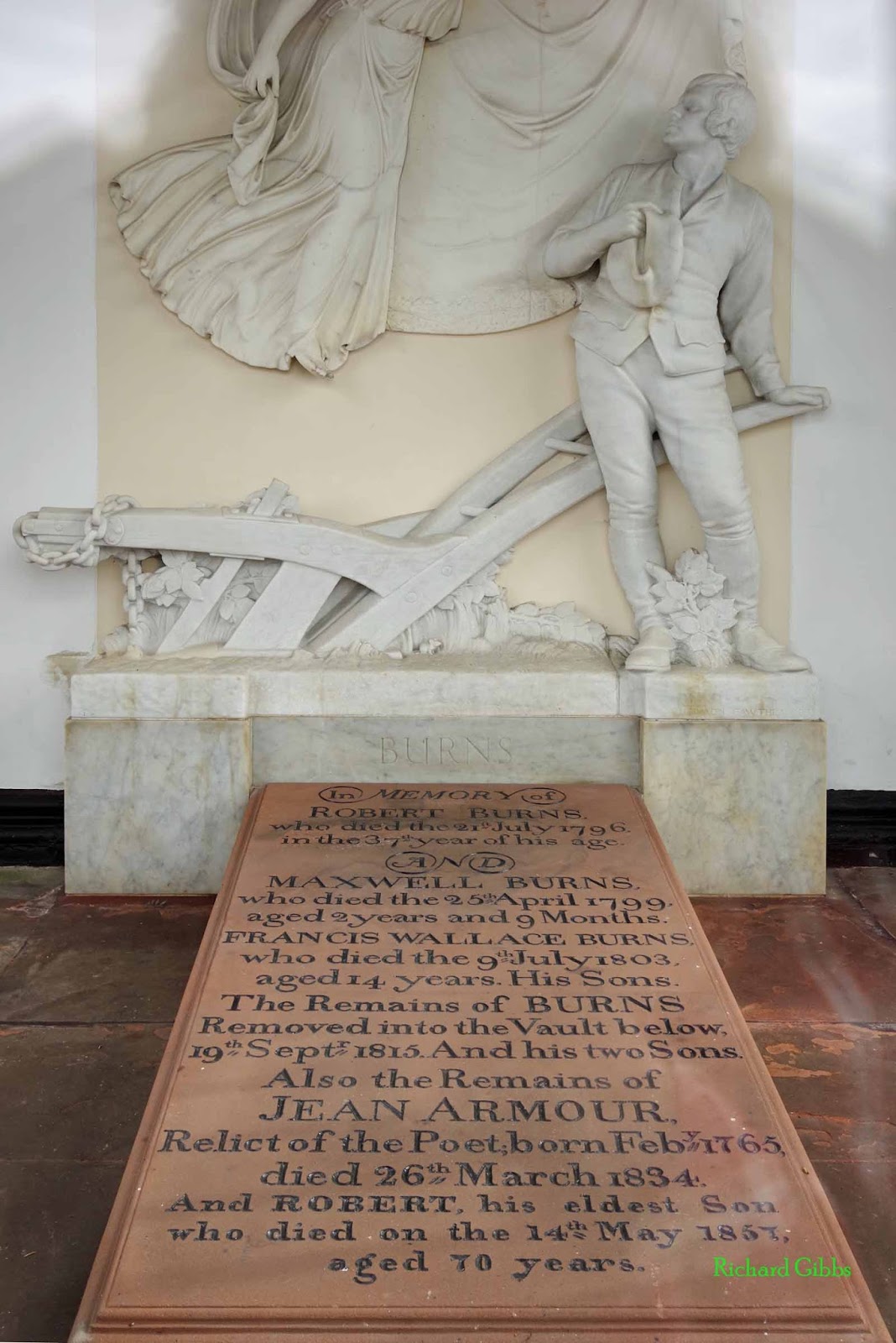 And then I step down the narrow lane off Dumfries High Street that leads to the Globe Inn, the howff where Burns spent many an hour, wining, dining, and courting Anna of the Gowden Locks....

Yest're'en I had a pint of wine,
A place where body saw na;
Yest're'en lay on this breast o' mine,
The gowden locks o' Anna.... 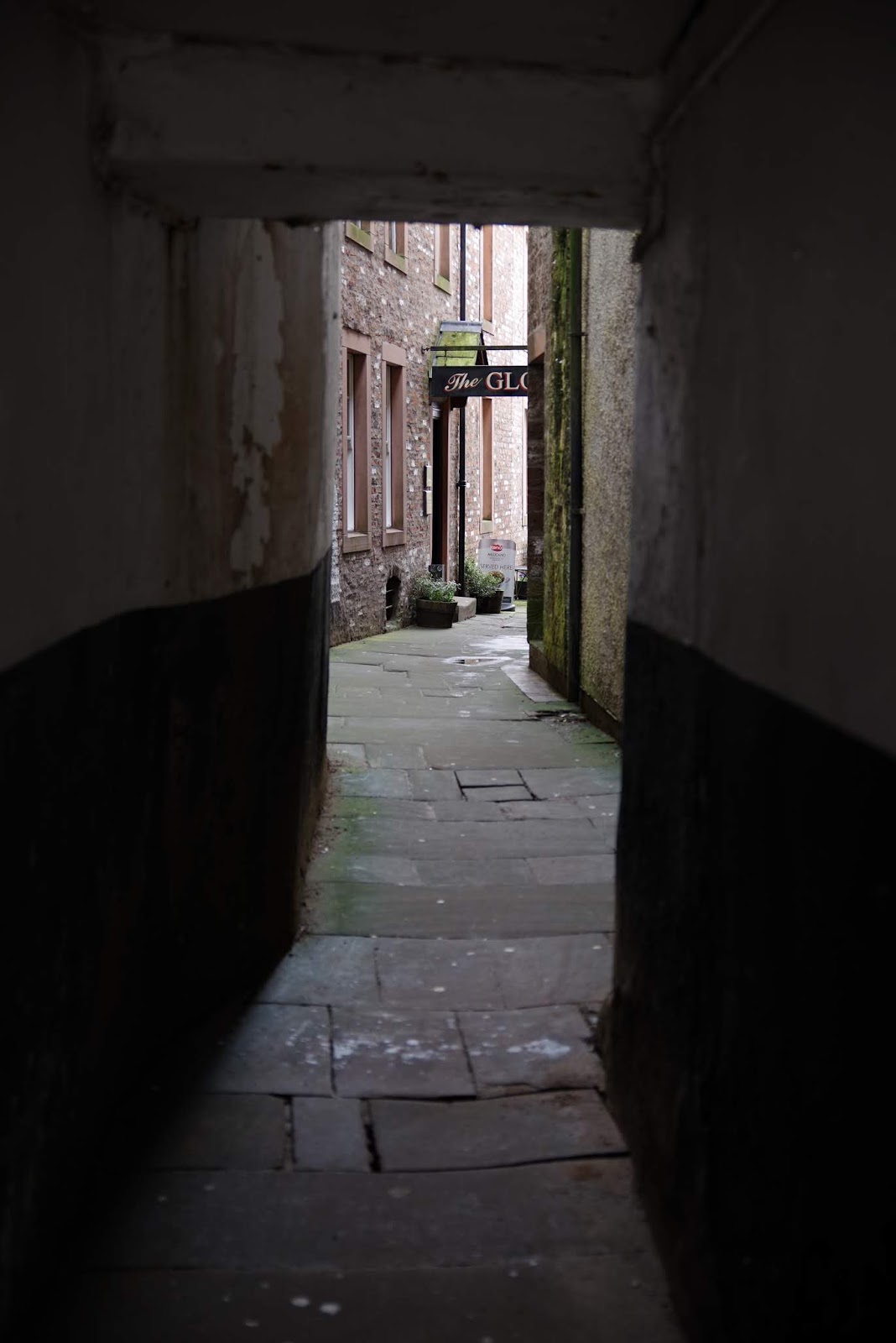 It's not too late.  There is still time, I hope, to appreciate the works of this particular poet man:

The winter it is past, and the simmer comes at last,
And the small birds sing on eve'ry tree:
The hearts of these are glad, but mine is very sad,
For my love is parted from me.

The Winter it is Past 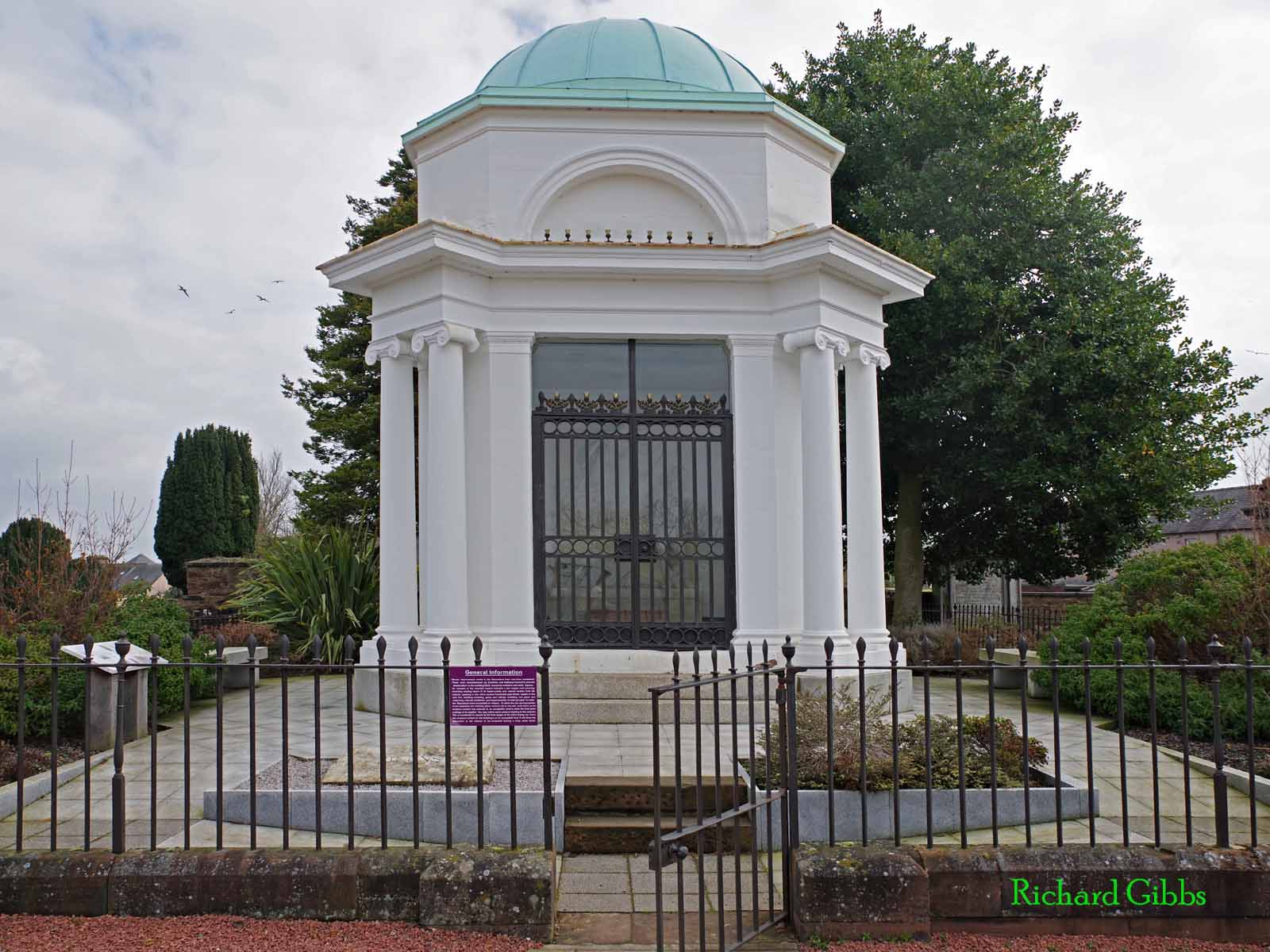 And though he no longer scratches poems on windows with his diamond ring, he has left us enough to be going on with, and more.  I hope his love of love will perhaps touch such souls as come together in the near future, (such as some who may marry on May 19th, in Camden, if not in Windsor....) 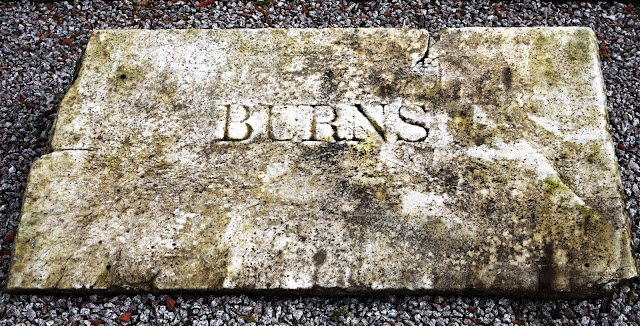 As Eddi Reader writes in her liner notes: What a wonderful thing that man did.... to write a song that makes everyone sing together and hold each other at the dawning of a new year, in ALL languages... and he never got to see it... God bless his soul. 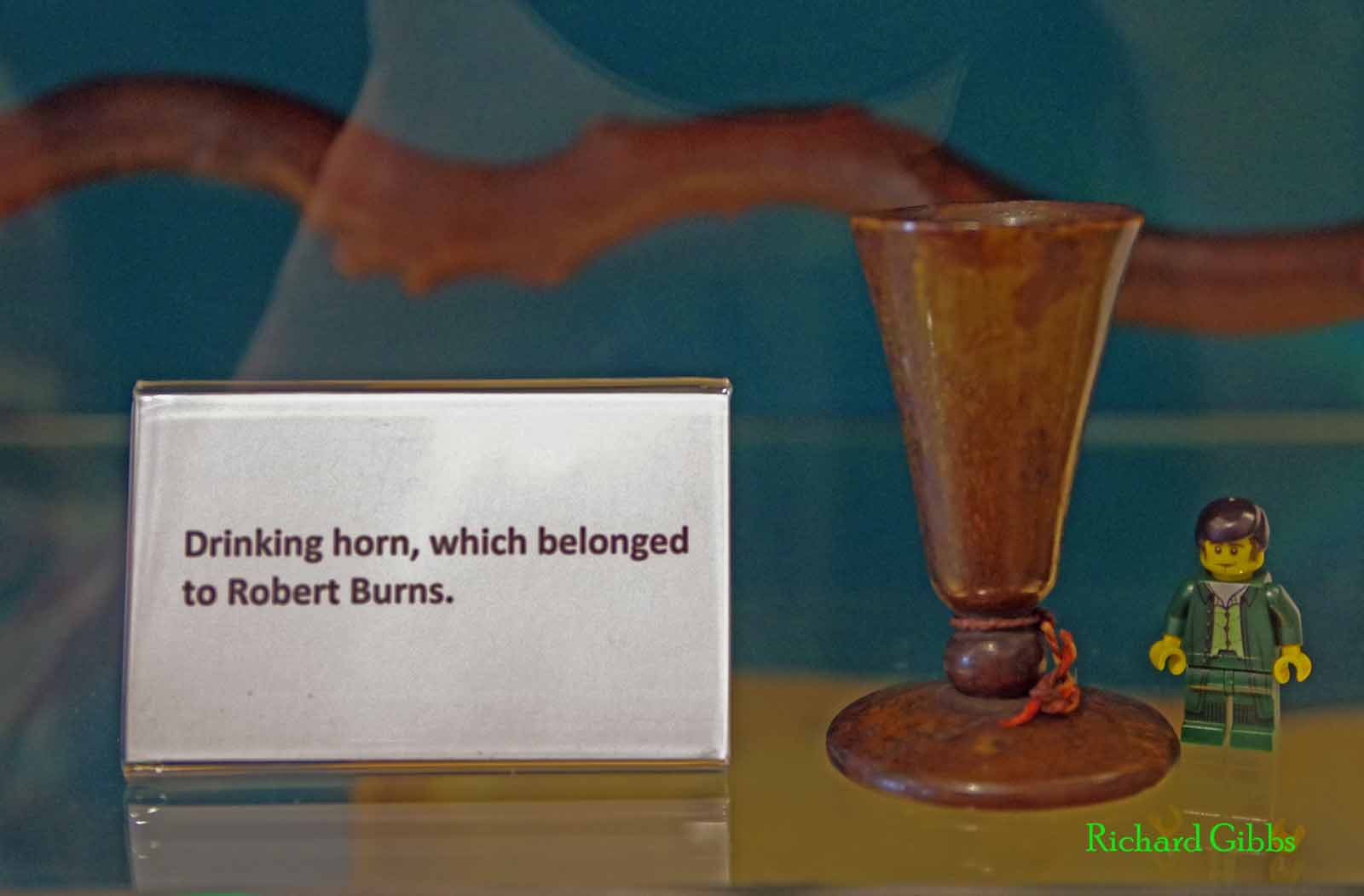