A Cocktail of Memories 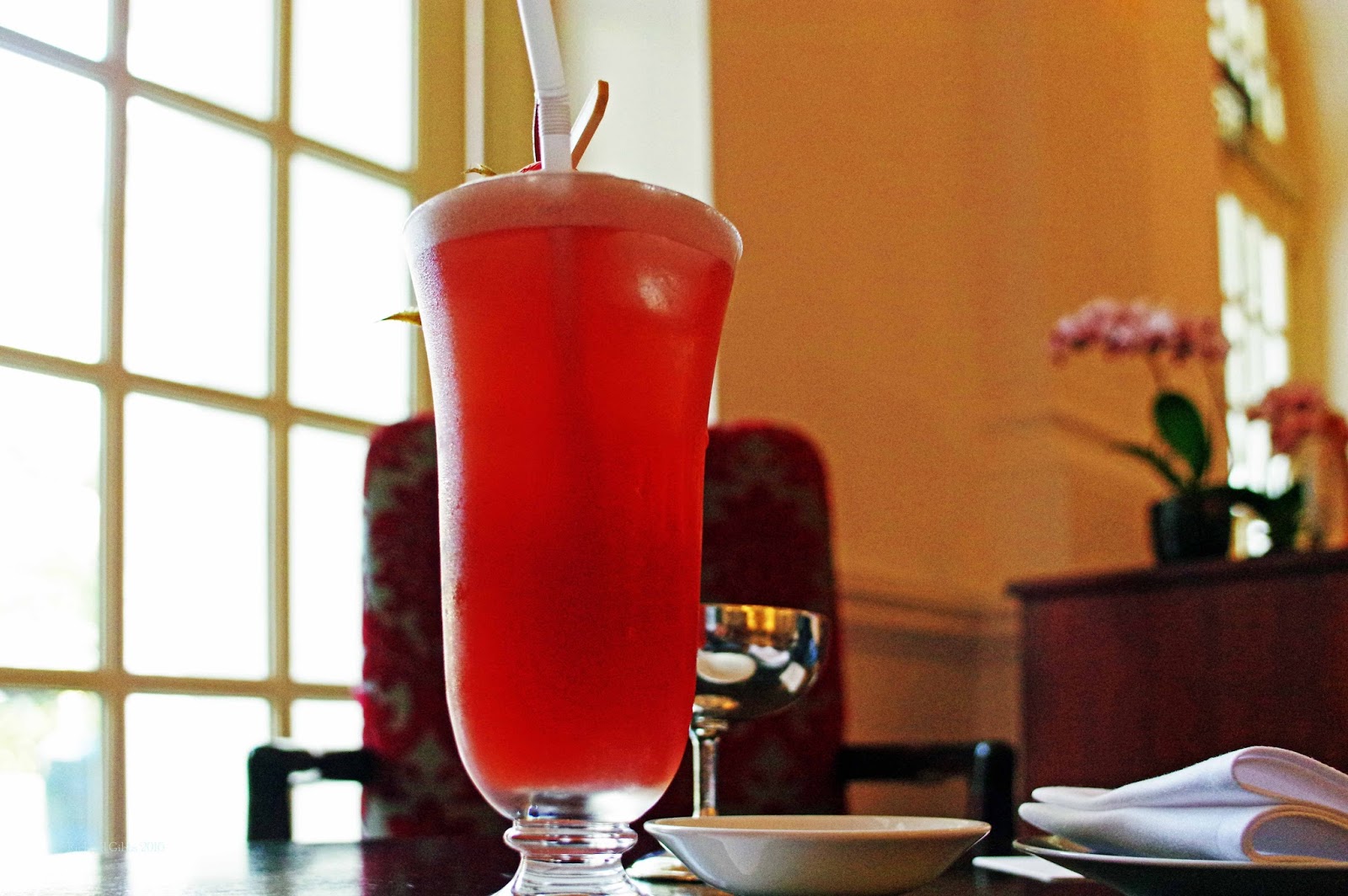 Sunday March 31st, 1985, Dawn at , again.  The plane empties a bit and we can change seats and have a bit more space and a better view….. We’re not allowed off however as it’s only a refuelling stop.

We can see quite a bit on the way down: Hoogli, or somesuch, and , Phuket and Penang, and then the straits of Malacca and .

The airport is a marvel of efficiency and clean design, and we are ushered through, smiled at, vetted, customed, money-changed, and booked into the Raffles in no time.  Then we are in a cab and gleaming through the green and sterile landscape….. 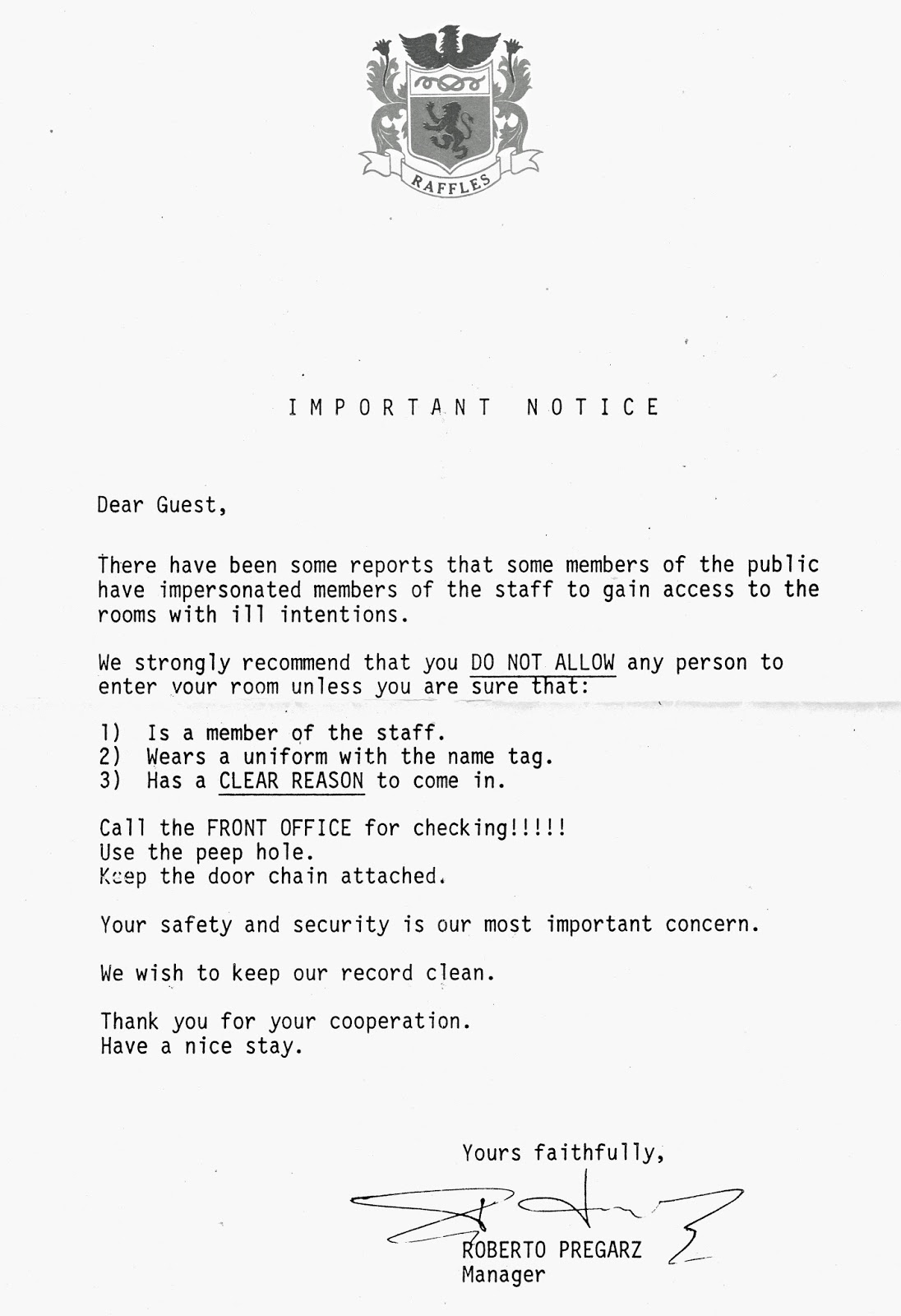 Our suite, No 286, is, admittedly a bit out on a limb, but it is still a part of the palm and bougainvillea set-up.  We have two rooms and a bathroom, lots of hot water and iced drinking water, lots of headed notepaper and a fridge.

We go out for a sortie….  It is gloomy, coming-on-to-rain humid and late afternoon.  St Andrew’s Church is just spilling out the Palm Sunday penitents, and the two cricket clubs on the maidan look healthily fat and cake-ish.  It is very Sunday, very quiet, but we see signs of life in and the places we see are not as homogenised as I expected: lots of greenery, and some of it is mould, some moss, some trees growing out of waste pipes….

As I flag, it starts to rain, so we whizz back to the hotel and dive into the Writers’ Bar for a Gin Sling and an ogle at the badly painted postcards that pose for Winston Churchill and other royalty.  The walls are adorned with these and with mugshots of famous, rich, boozy and boring writers who languished here: Maugham being one of the tops; James Michener one of the bottoms! 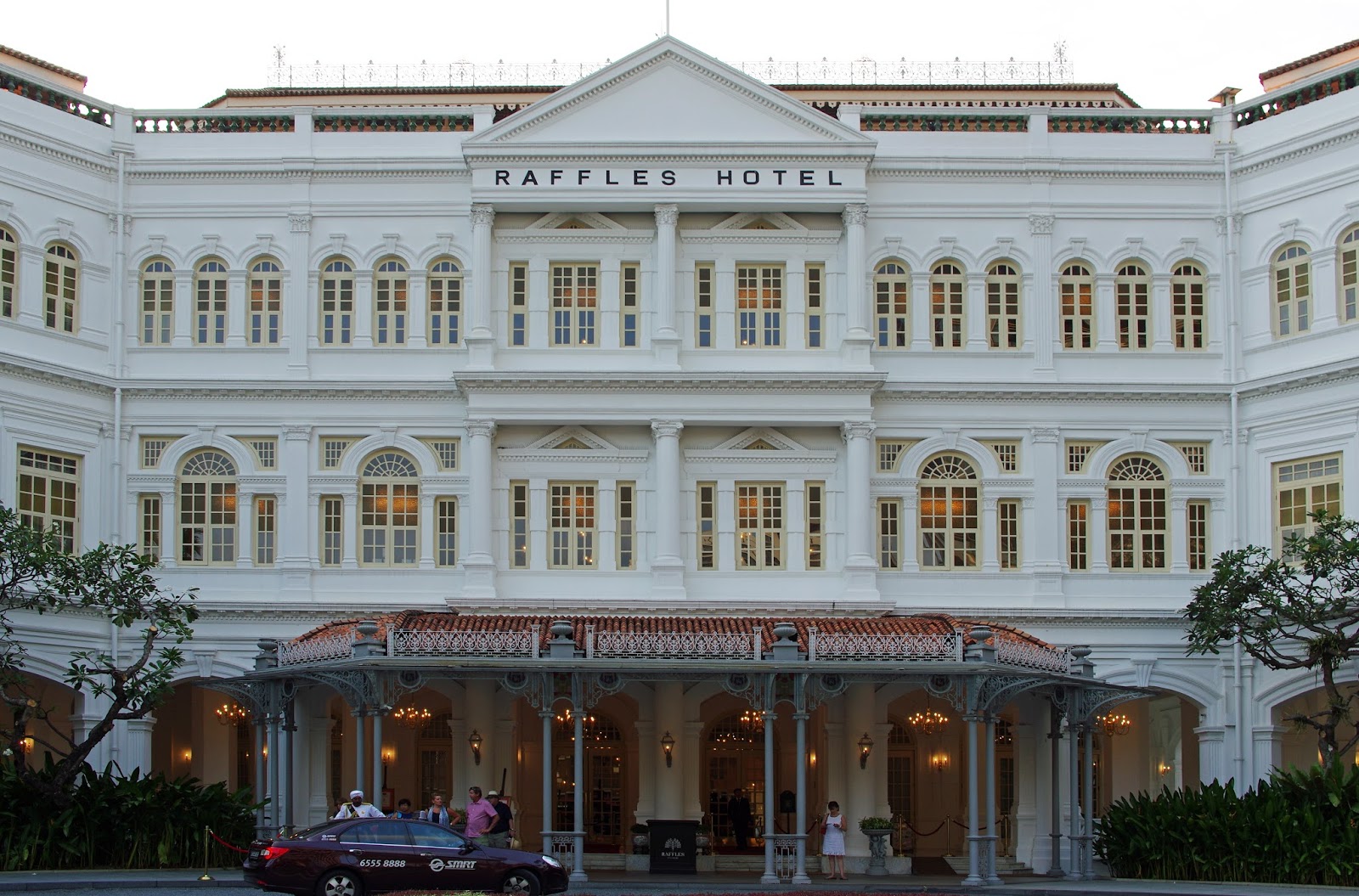 Wednesday March 30th, 2016…. Taxi to and Bumboat ride round   and the river down to and back.  Walk back to hotel for shower and rest and thence out again to explore the Raffles Hotel….  After checking out the Billiard Room and the Long Bar (full of tourists) we manage to gain access to the Writers’ Bar (no tourists, no photos) which is residents’ only.  It has been altered, as has the whole hotel, but the Sling is just as wonderful as it was back then….. 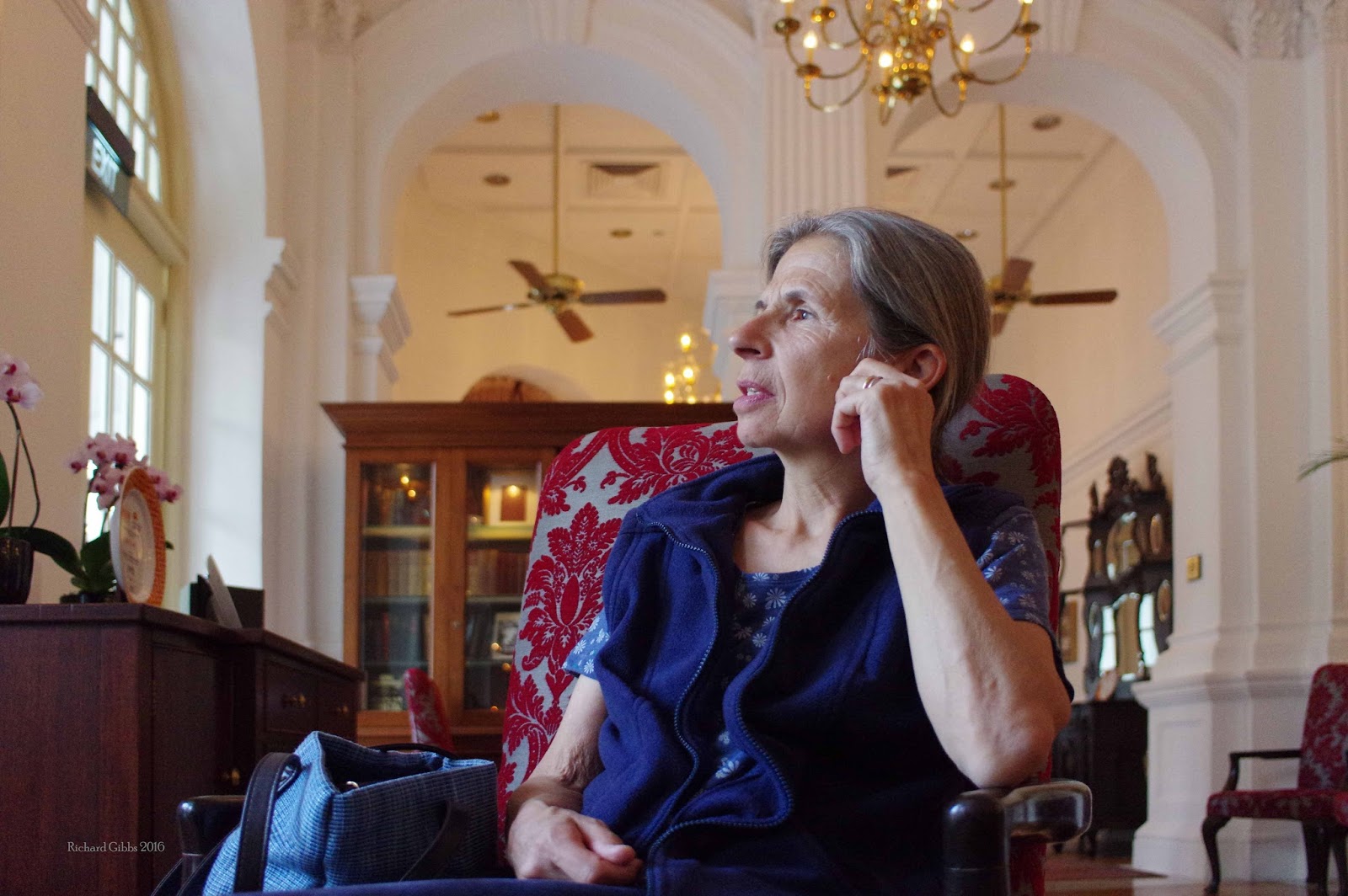 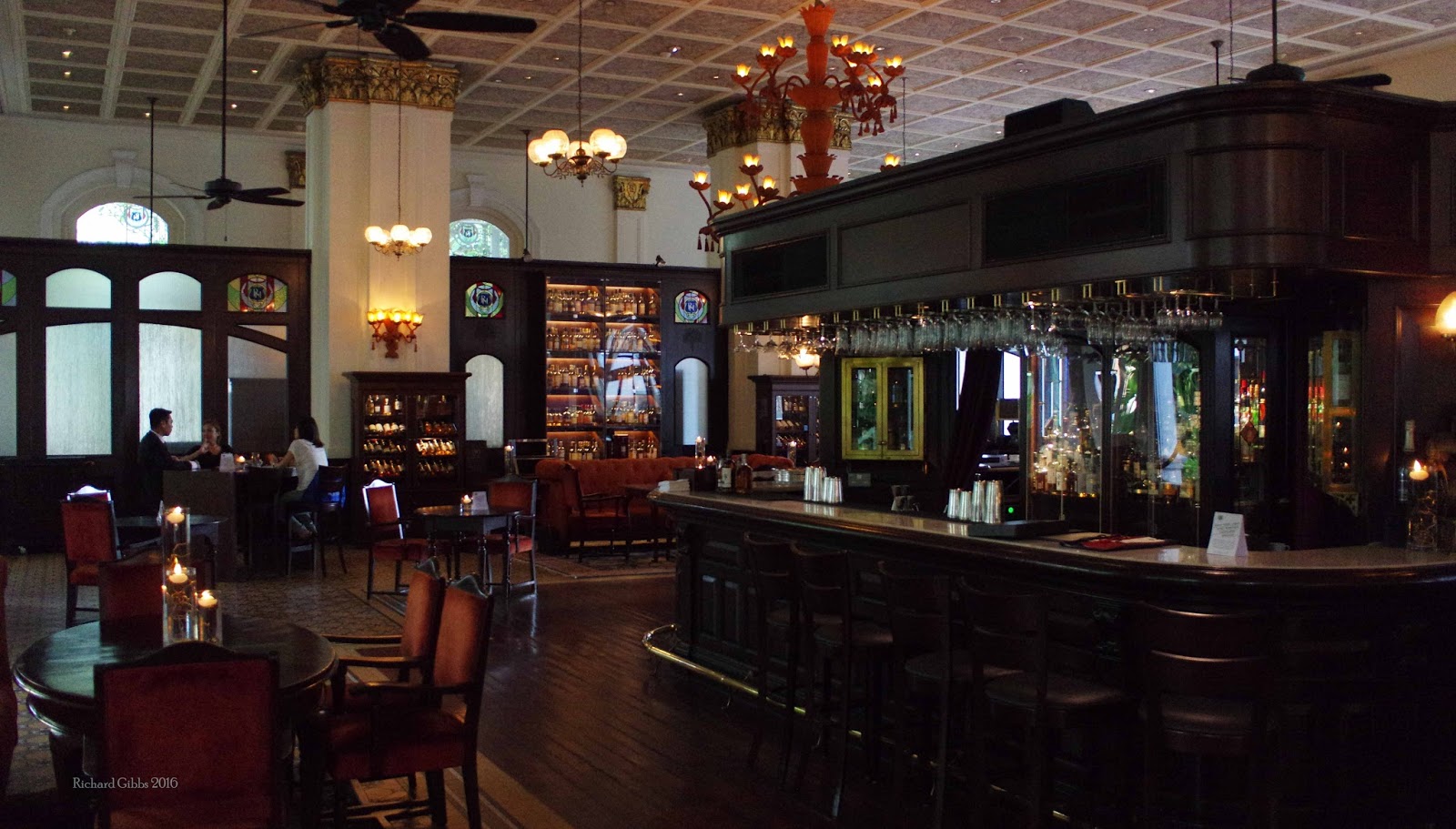 (For the record, though it hurts to record this, my credit card was lighter by £27.62 after one Gin Sling and an apple juice)….. 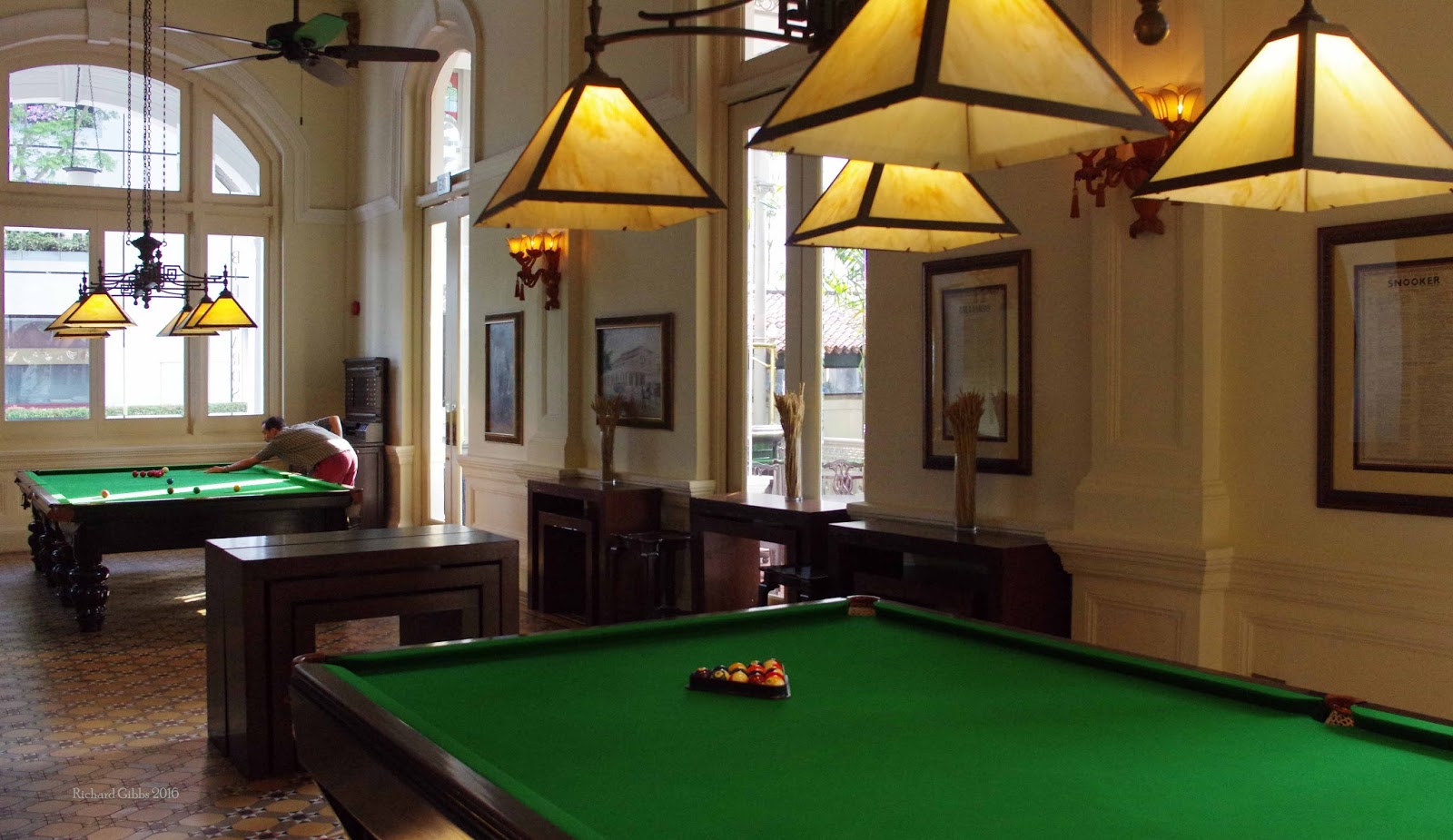 Although the islands of have been inhabited for millennia, the modern city-state was founded by Sir Stamford Raffles in 1819.  Its name (Singa Pura in Sanksrit) means Lion City, and it is the world’s only island city-state and the world’s busiest port.  It has a population of five and a half million, an area of 270 square miles, and an estimated GDP per capita of over $80K, which makes it the third richest place in the world. 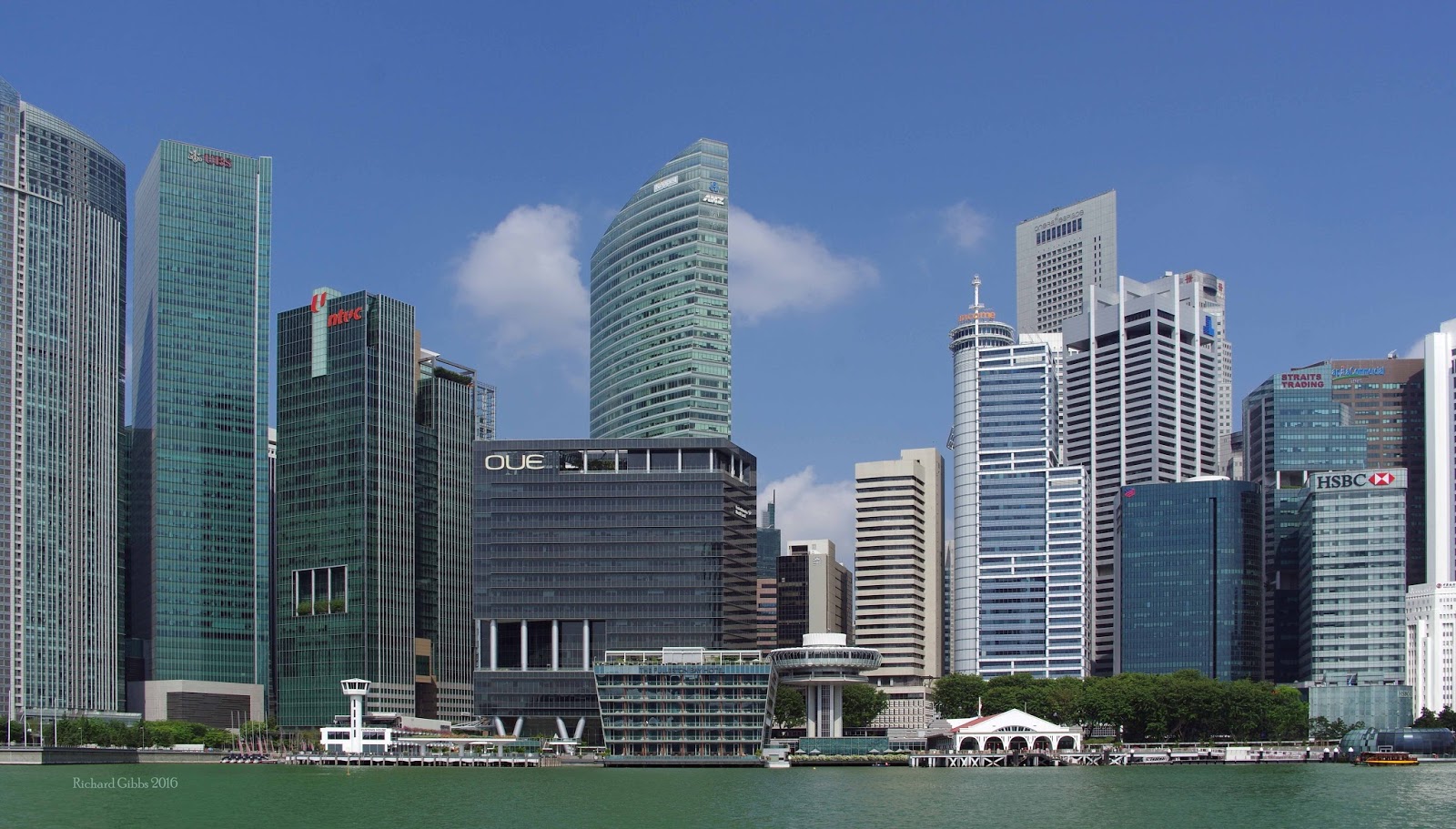 Since the time of Raffles it was a British colony until the Japanese occupied it in 1942.  It was liberated in 1945 (with the help of my uncle Peter McMullin who arrived in Taiping in December 1944), became self-governing in 1959, merged with in 1963, and then became independent in 1965, with Lee Kuan Yew as Prime Minister. 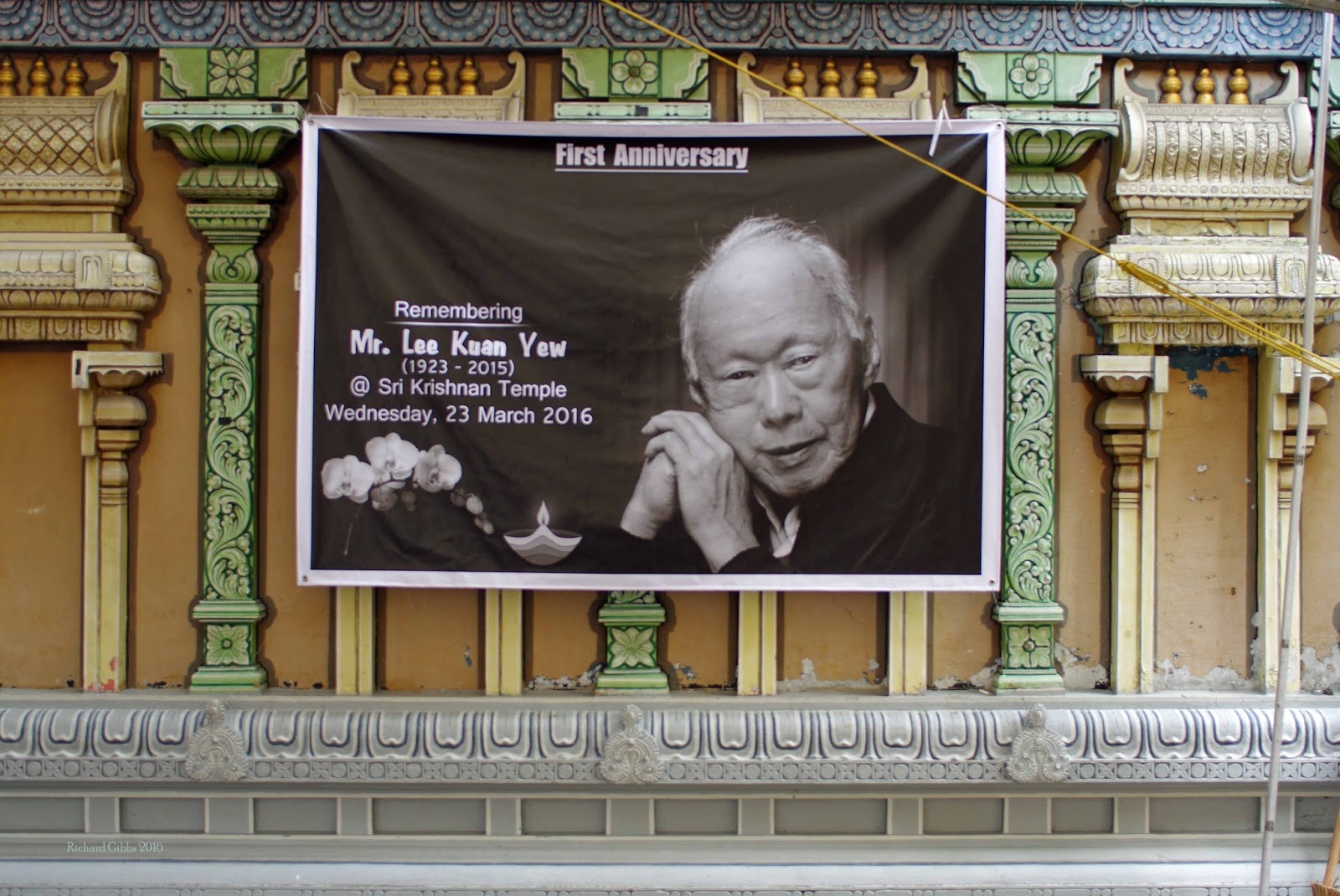 At only one degree off the equator it is a steamy place, and the lowest temperature ever recorded there was 19.4ºC.  But, in contrast to other Asian cities it is clean, ordered, and attractive. 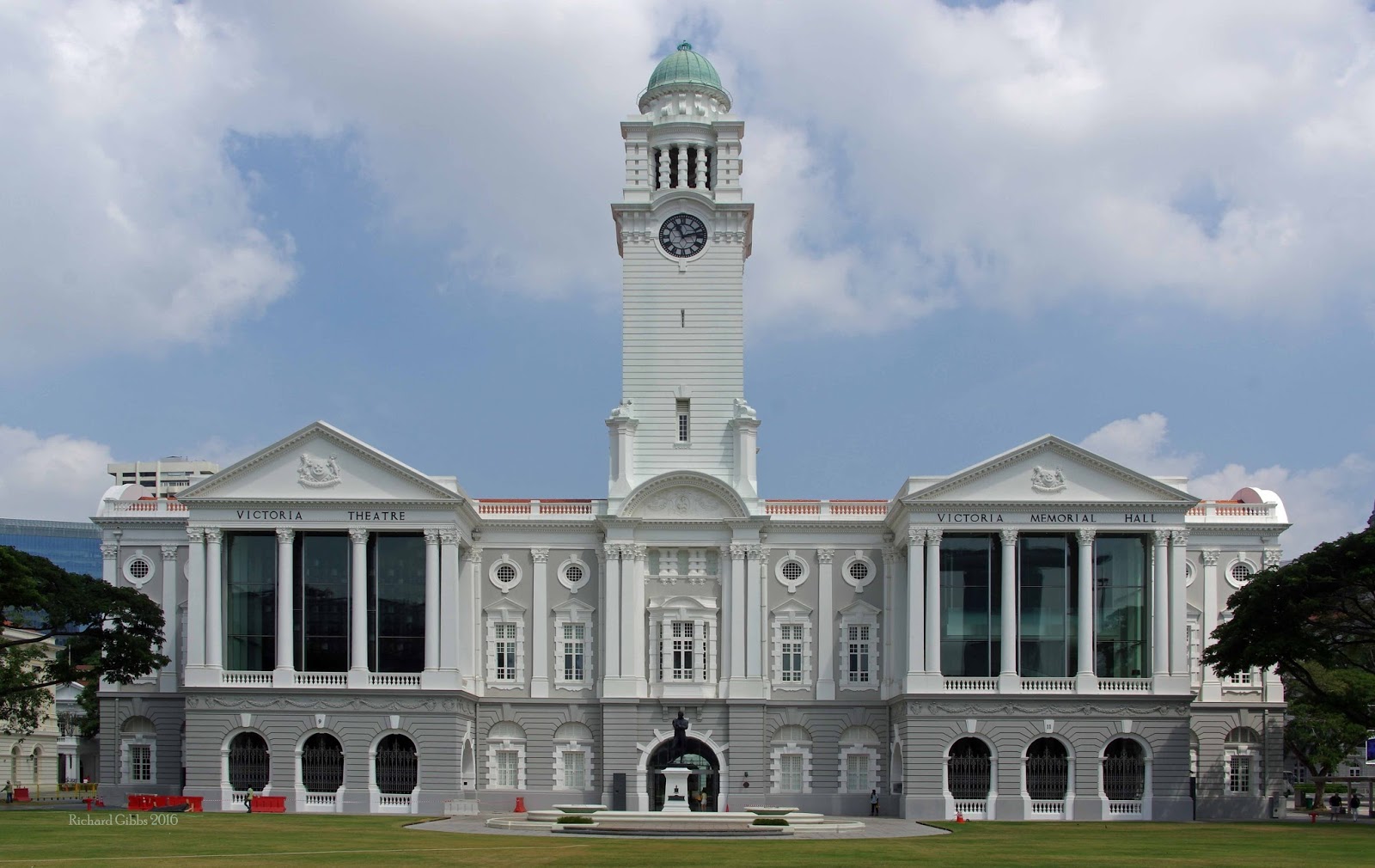 Not much of the old town remains (it was severely bombed by the British before the Japanese surrender) but Boat Quay and Emerald Hill survive to show some of the earlier elegance. 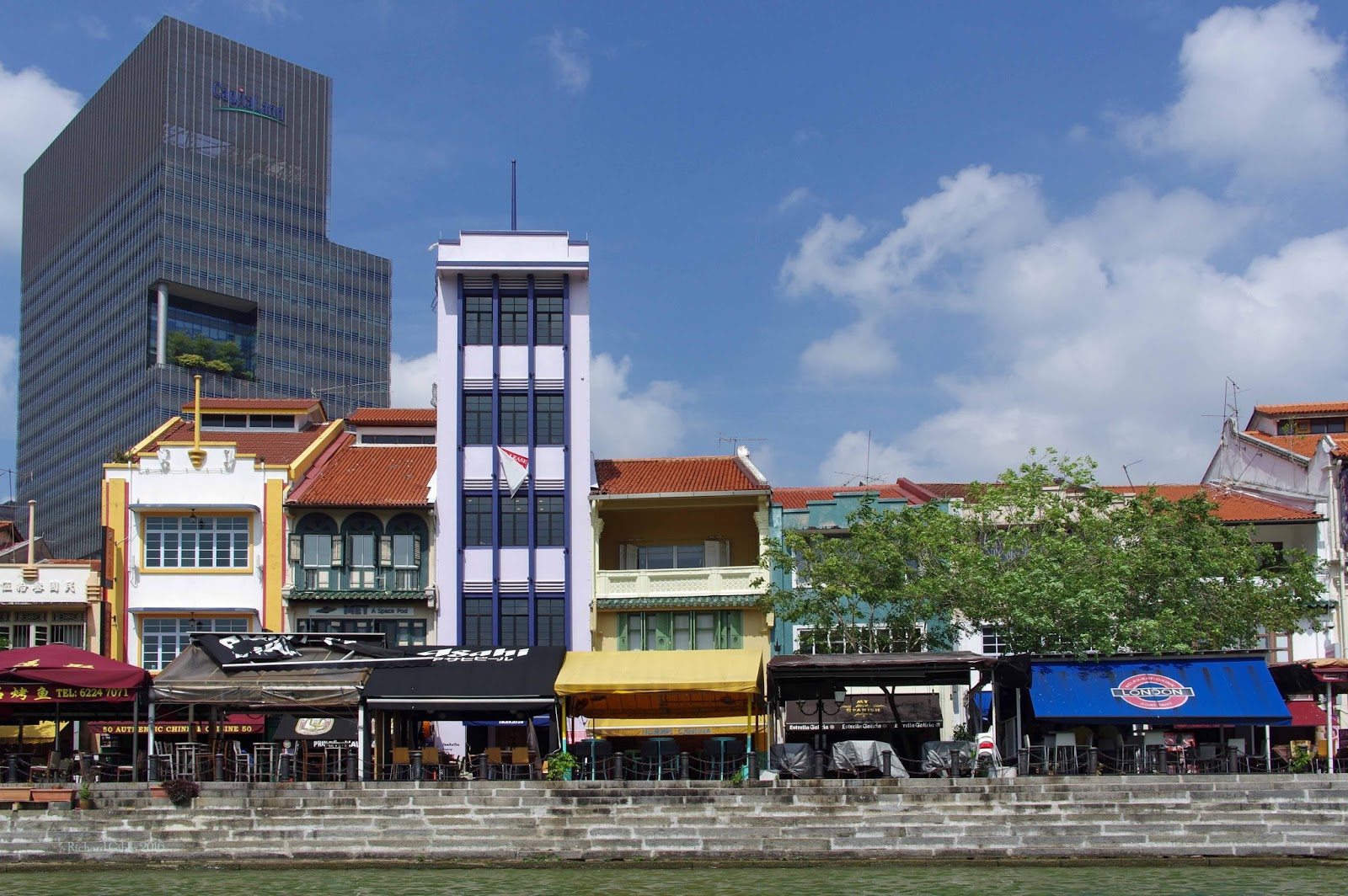 When I first visited, in 1985, Lee Kuan Yew was still in power (he stepped down in 1990, though continued in the cabinet until 2011, dying in 2015).  He had led to significant economic success, though sometimes by harsh means (you can be fined for not flushing a toilet, or for selling chewing gum)!  There were then little old streets in , and we ate street food there – but there is very little of that left now and today the skyline is dominated by gleaming skyscrapers, including the amazing 200 metre tall Marina Bay Sands Hotel and Sands Skypark, with its roof gardens crowning the triple towers. 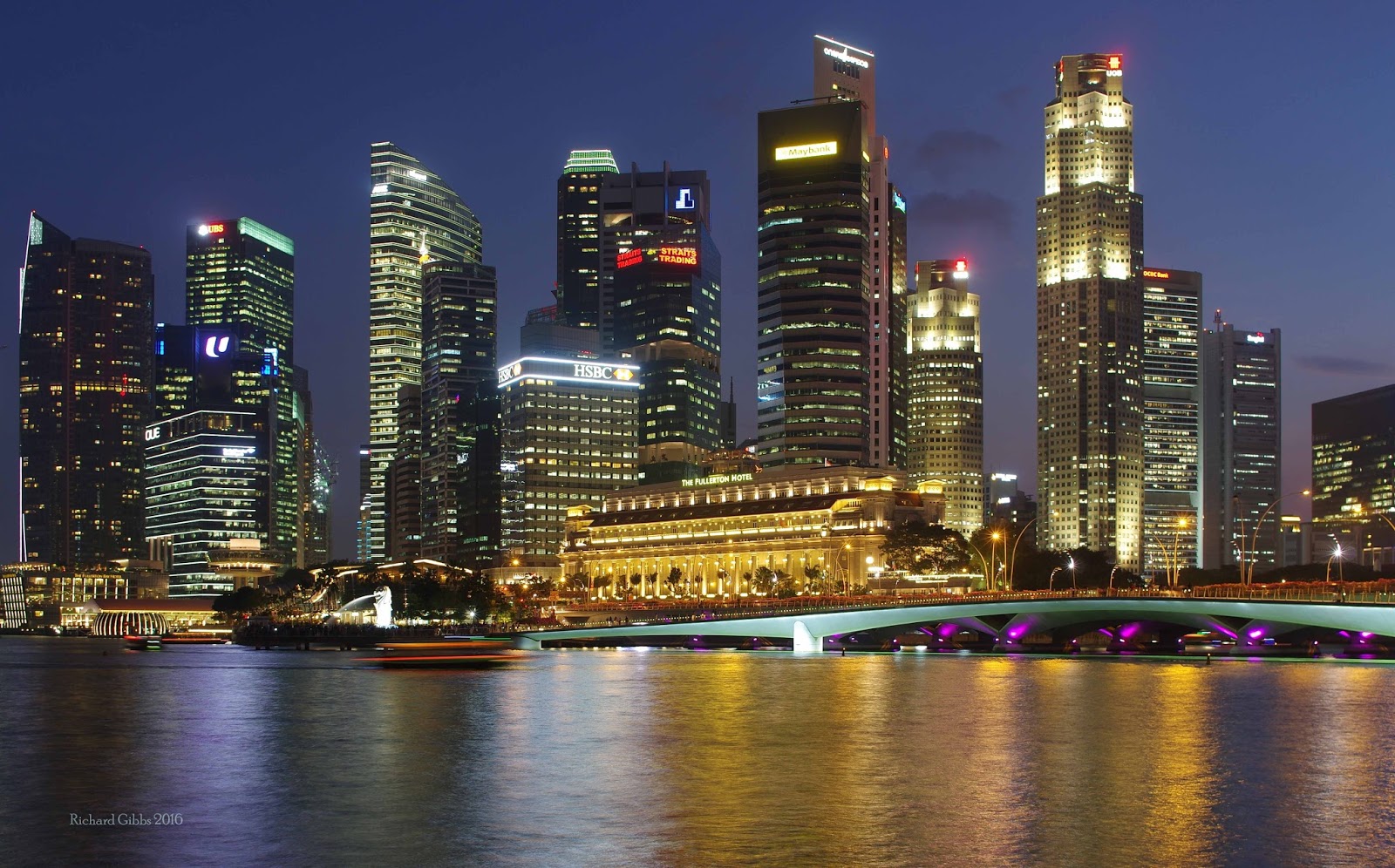 There are three main ethnic groups (Chinese, Malay and Indian) but English is universally spoken (though there are four official language – English, Malay, Mandarin Chinese and Tamil).  Due in part at least to its position and superb airport, it is a busy tourist destination, with plenty to see and do for at least a few days stopover. 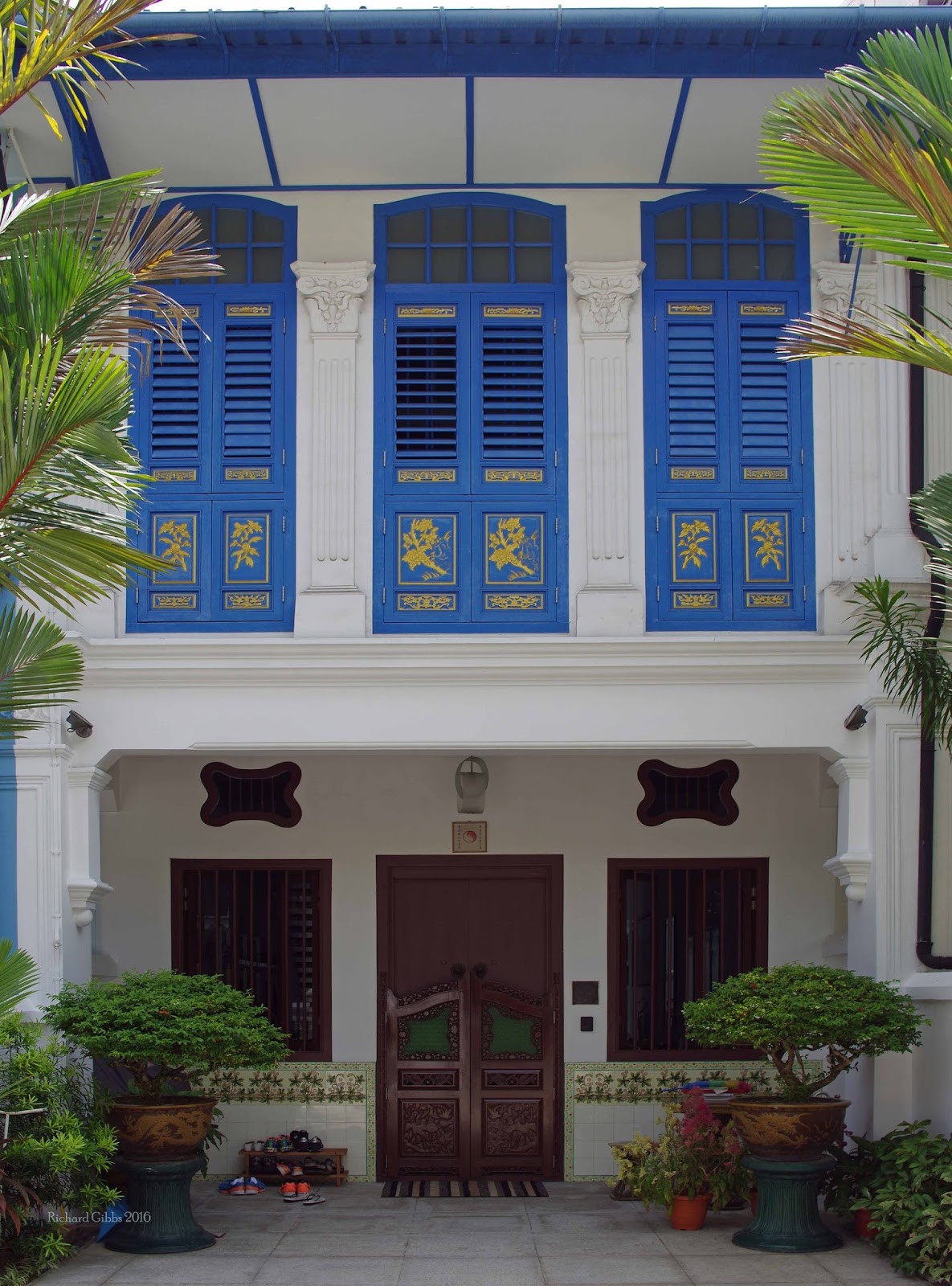 We had a most enjoyable wander around the Singapore Botanic Gardens, 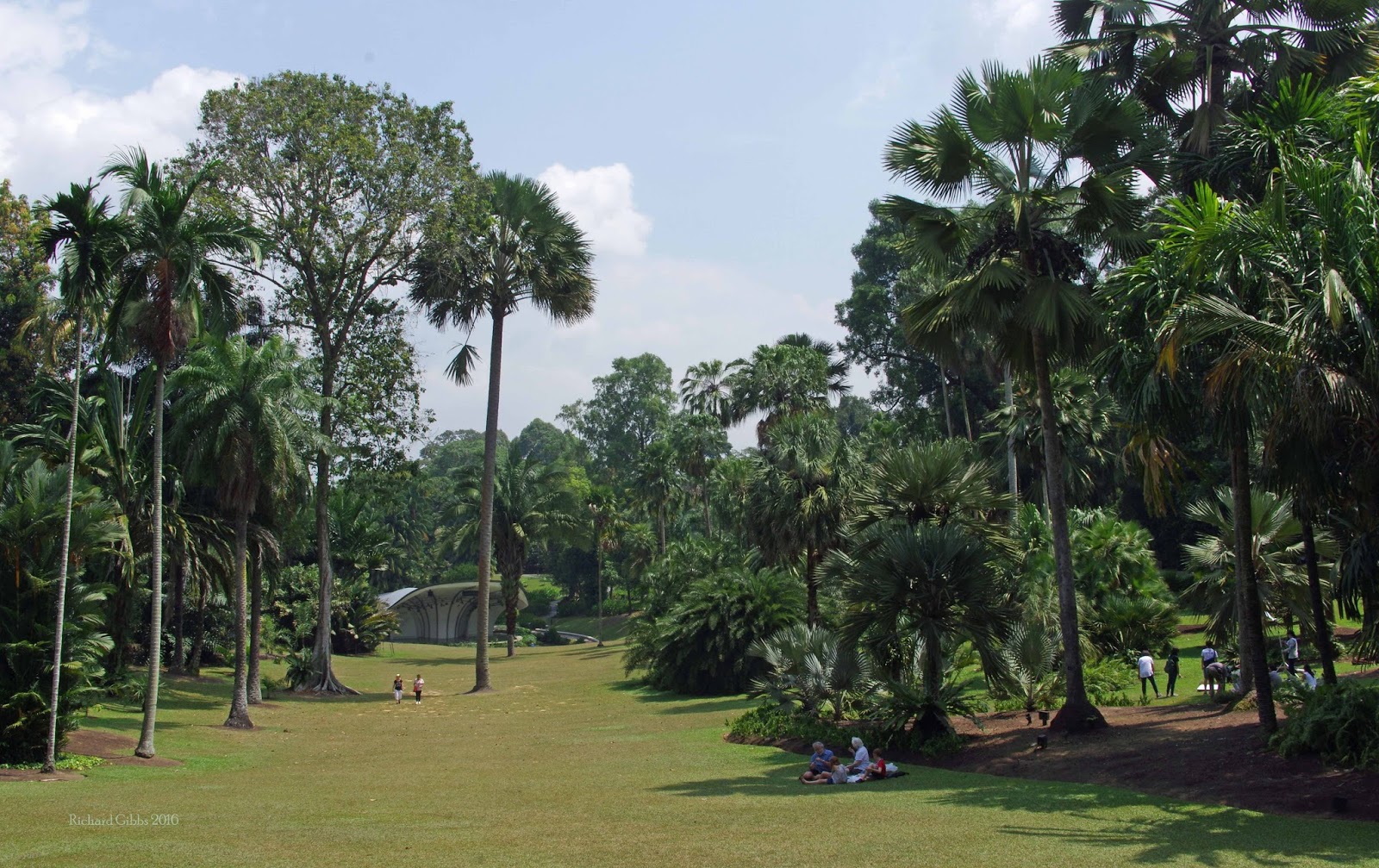 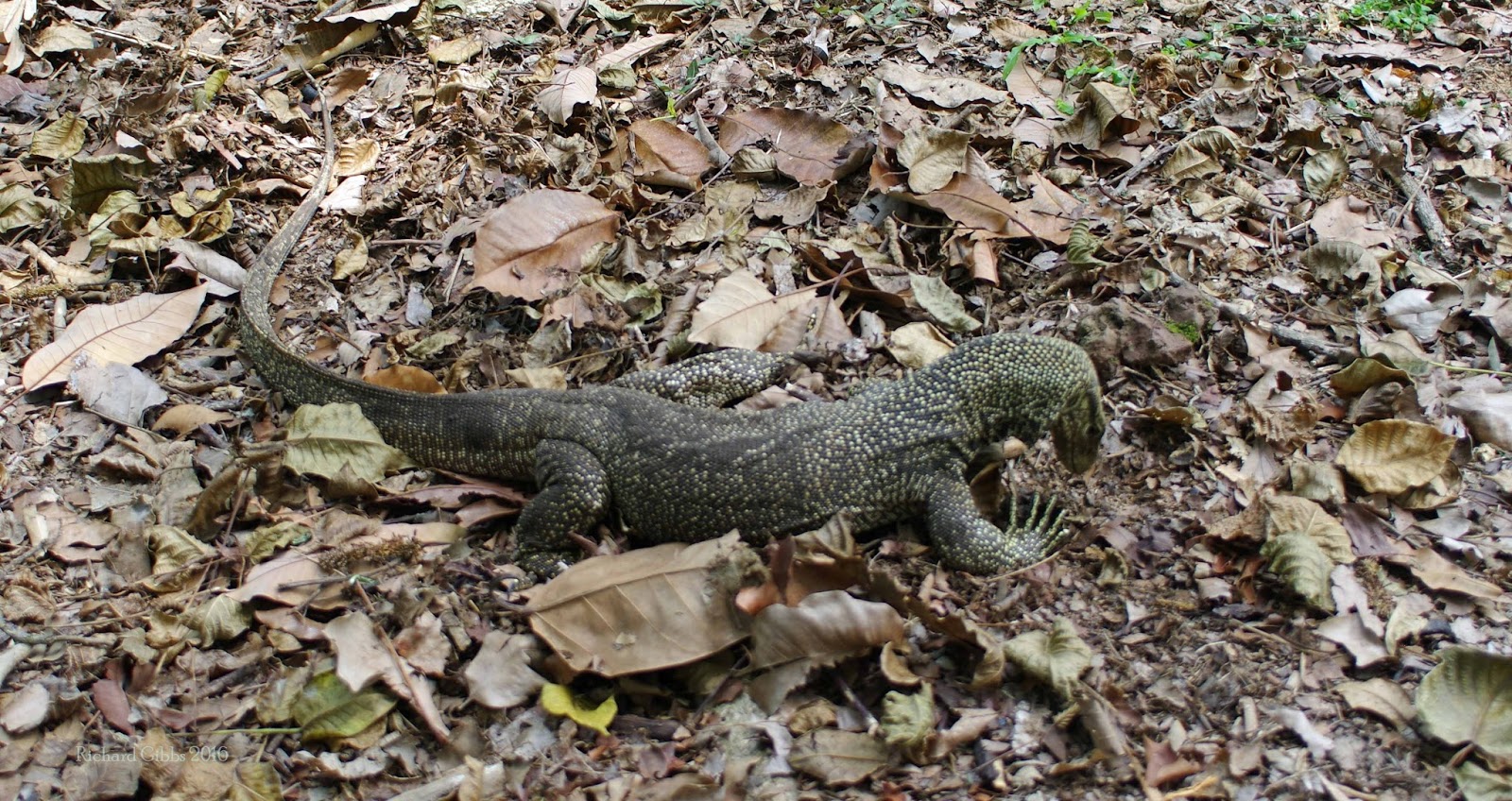 and orchids (in the )

are hybridised to commemorate celebrity visits…..

And we enjoyed dining out overlooking under a beautiful sunset. 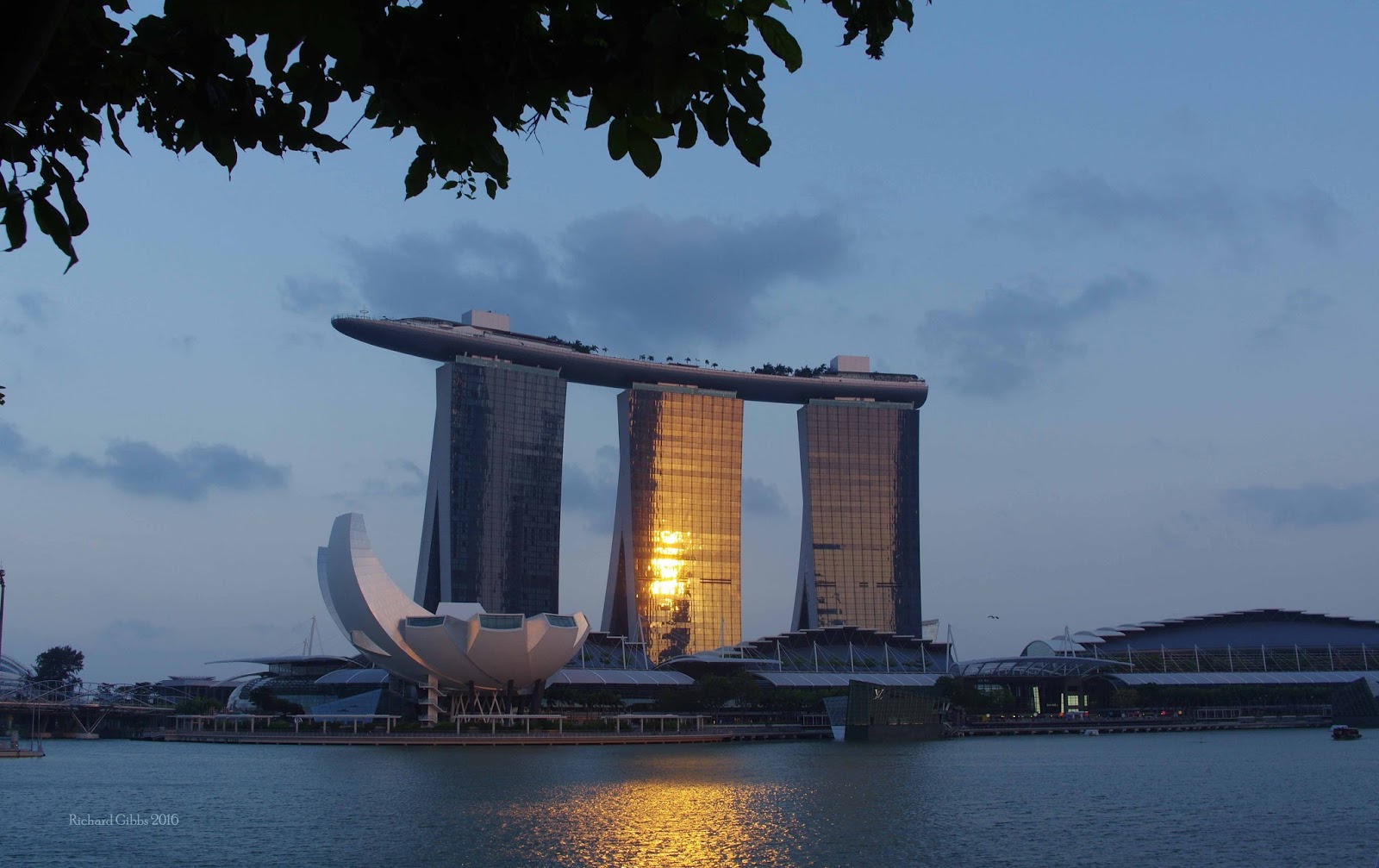 We stayed this time in the , where Saravanan Ratha looked after us with great care.  The hotel is in a series of converted shophouses in , and was fine. 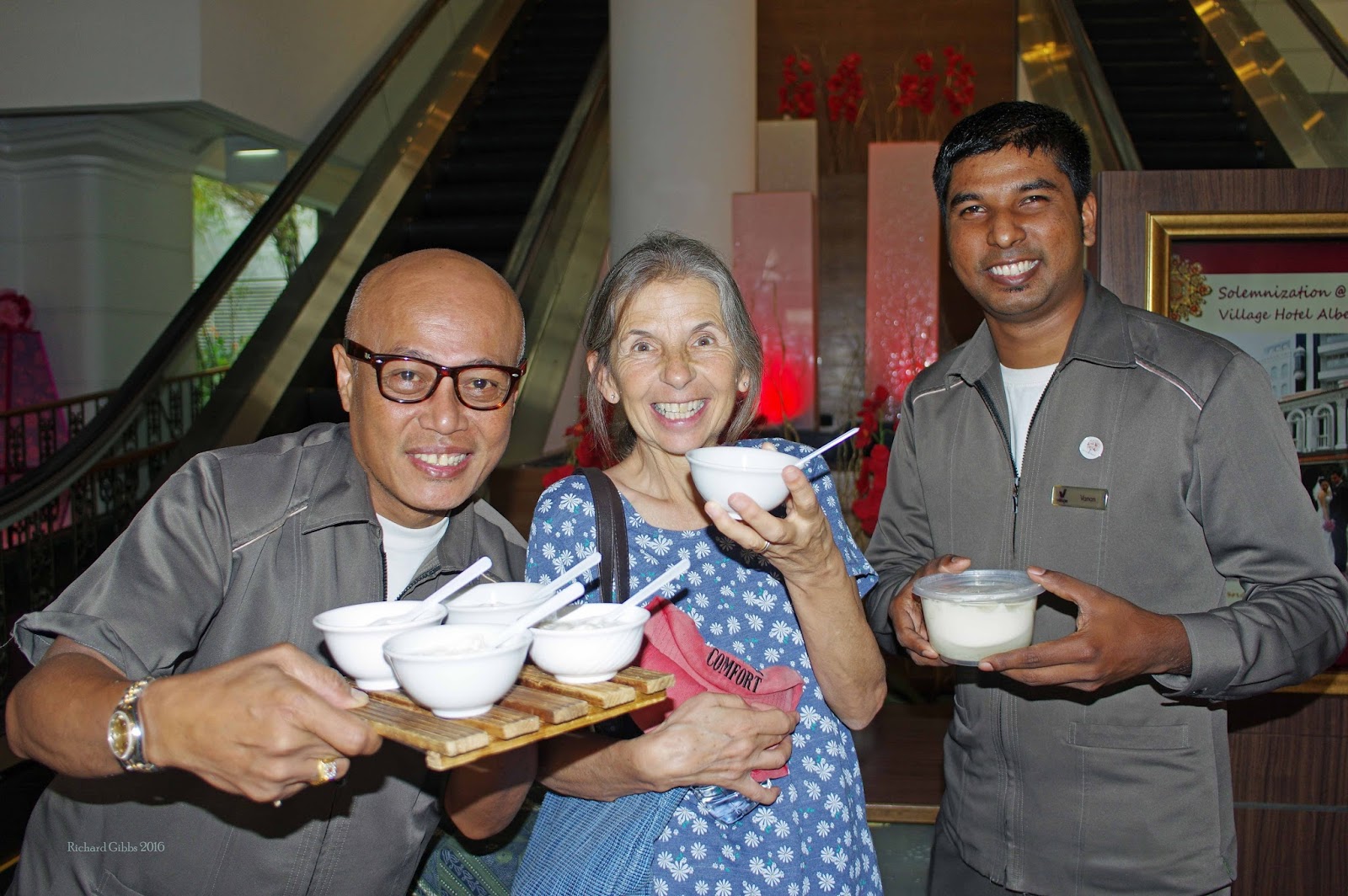 I would have stayed in the Raffles, but at about £400 B&B it seemed excessive, especially as it has lost some of the charm that Joseph Conrad, Rudyard Kipling, Somerset Maugham and Ernest Hemingway left behind them….  Shortly after I departed in 1985 it was declared a National Monument (not because I had stayed there), and then closed down for three years’ refurbishment at a cost of $160 million (also not entirely because I stayed there).  In 2010 it was reportedly bought by a Qatari Sovereign Wealth Fund.  In 2012 the was closed; this had held memorabilia such as silver and china items, postcards and menus, as well as old and rare editions of the works of the famous writers who stayed there as well as photographs of its famous guests…..

I guess people are more interested in pictures of themselves these days? 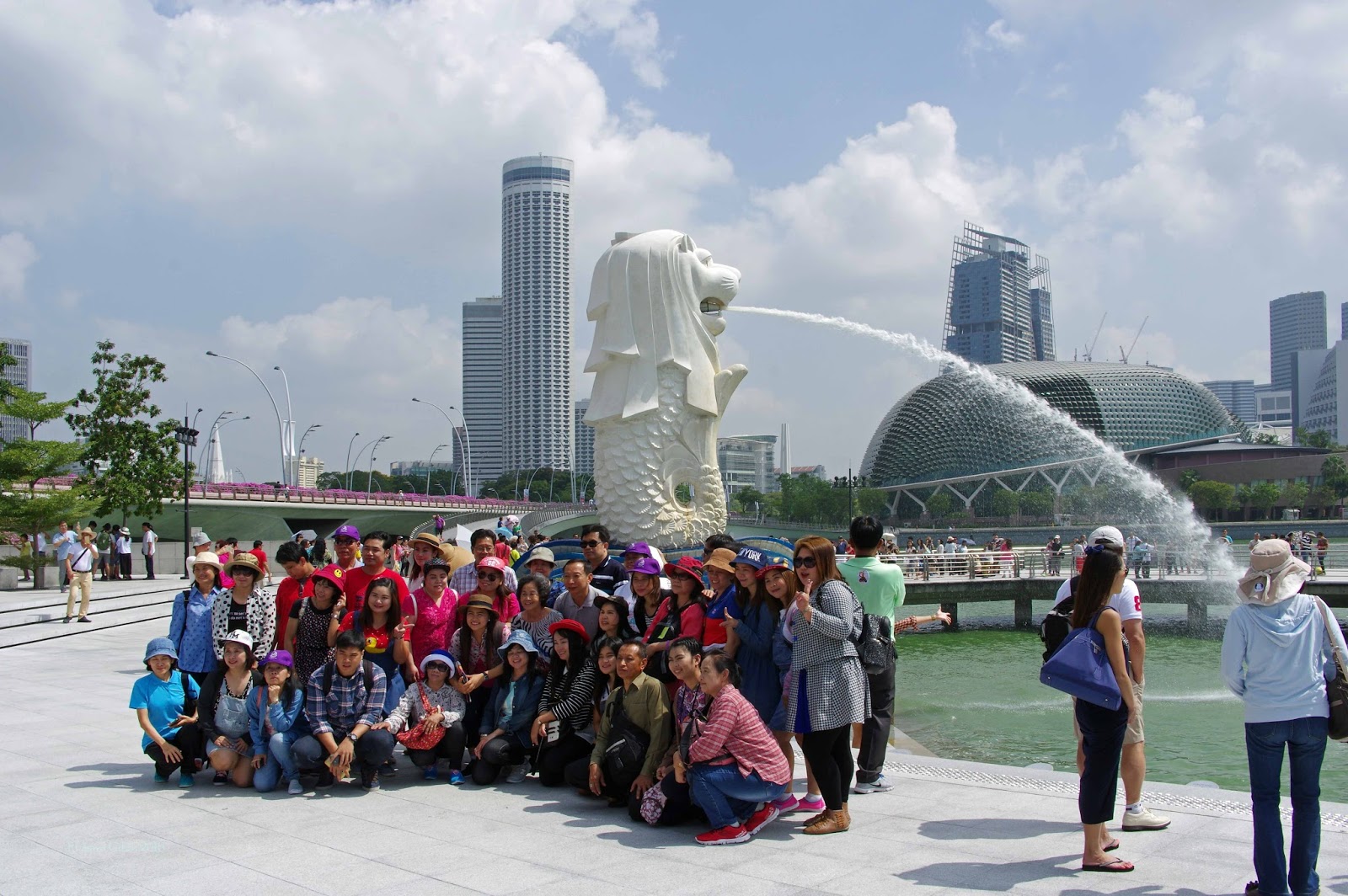 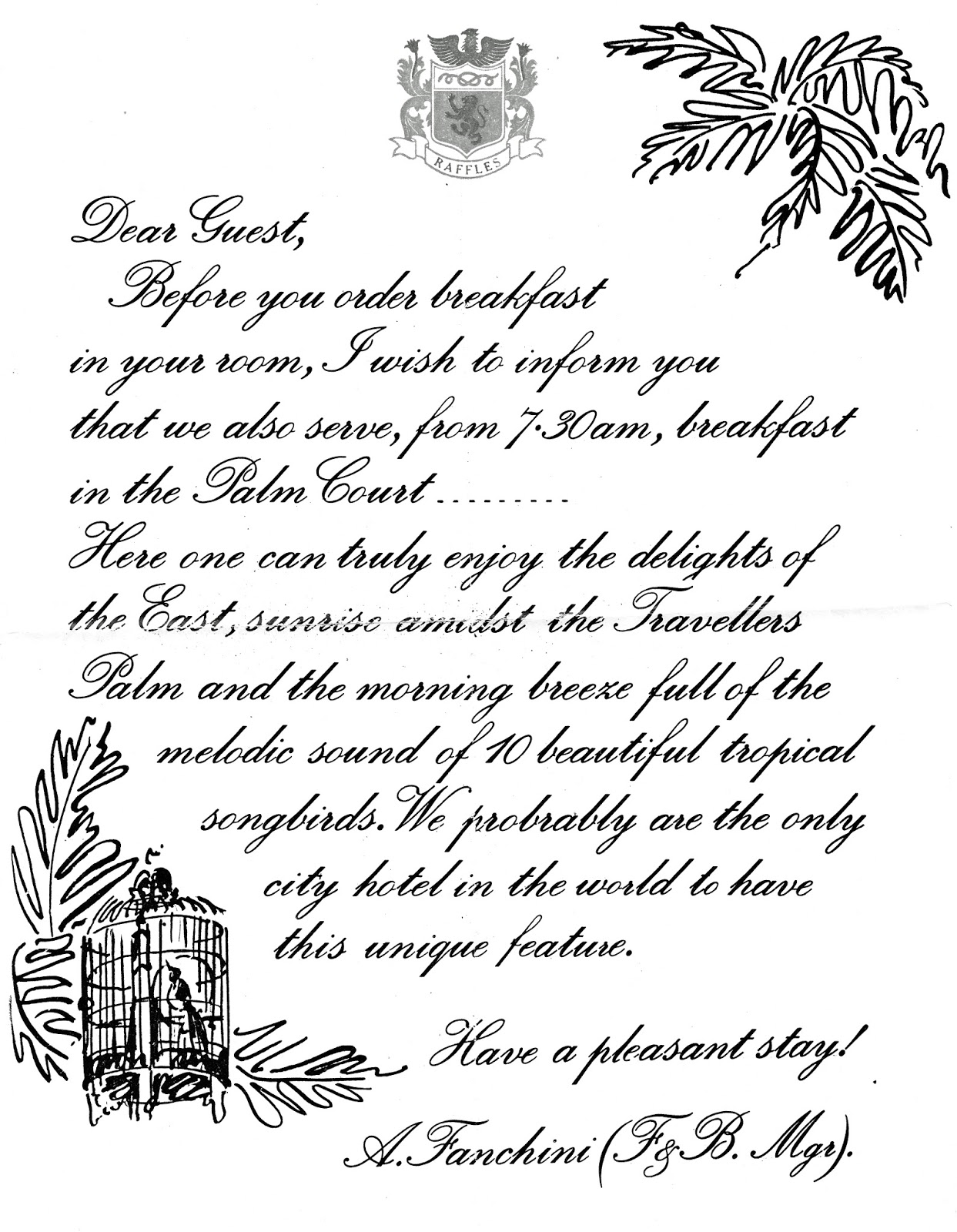 We’ve been granted stay of execution until 4.30, so relax and pack and then check out and have a rather old-fashioned (and unsuccessful) haircut by a Chinaman who razors behind the ears and pummels the shoulders…. 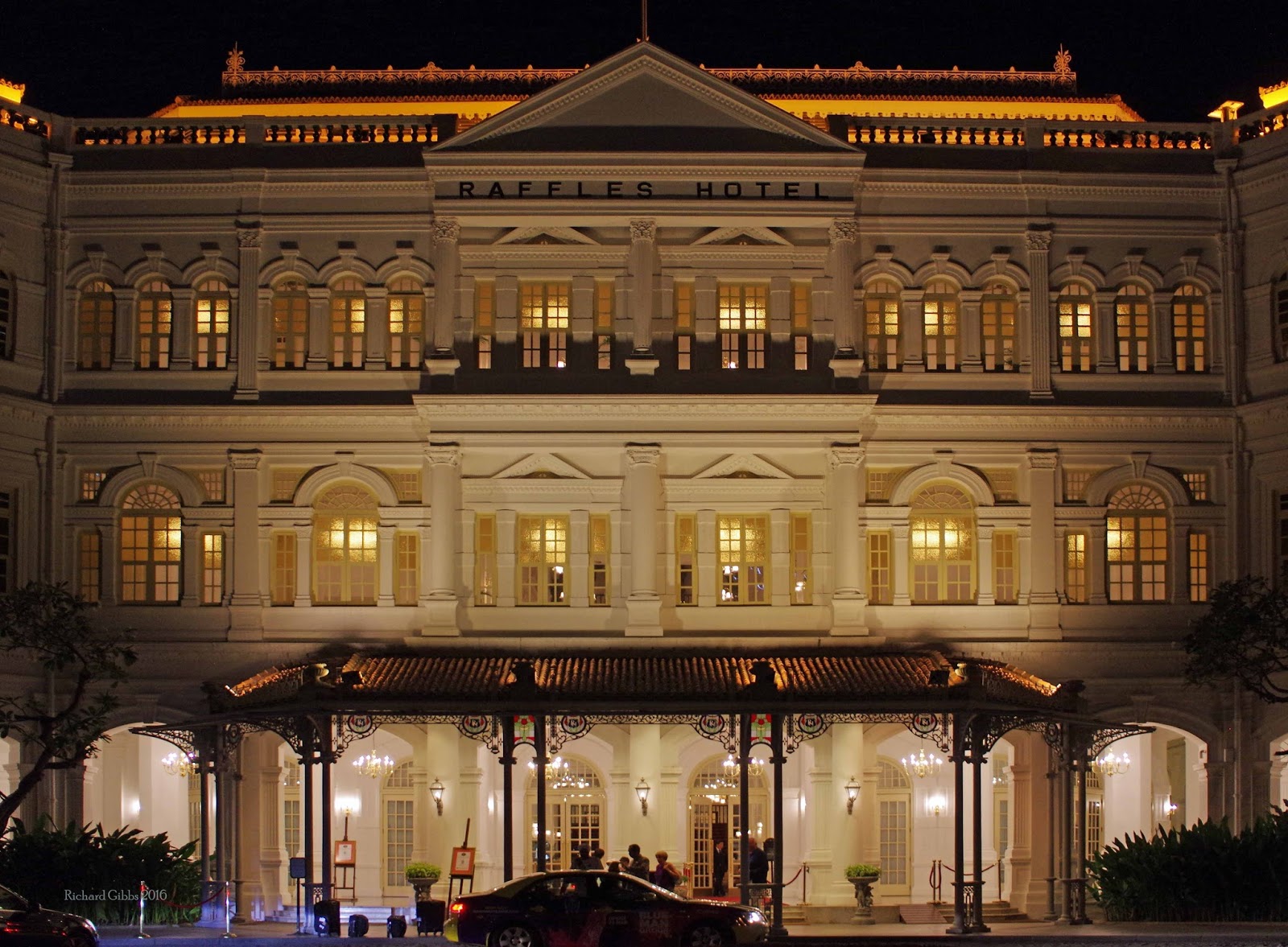 Flew back from the other day via .

Went to see my mother today.

Both are distant, and both contain large empty spaces.

But then, both have sunny dispositions…. 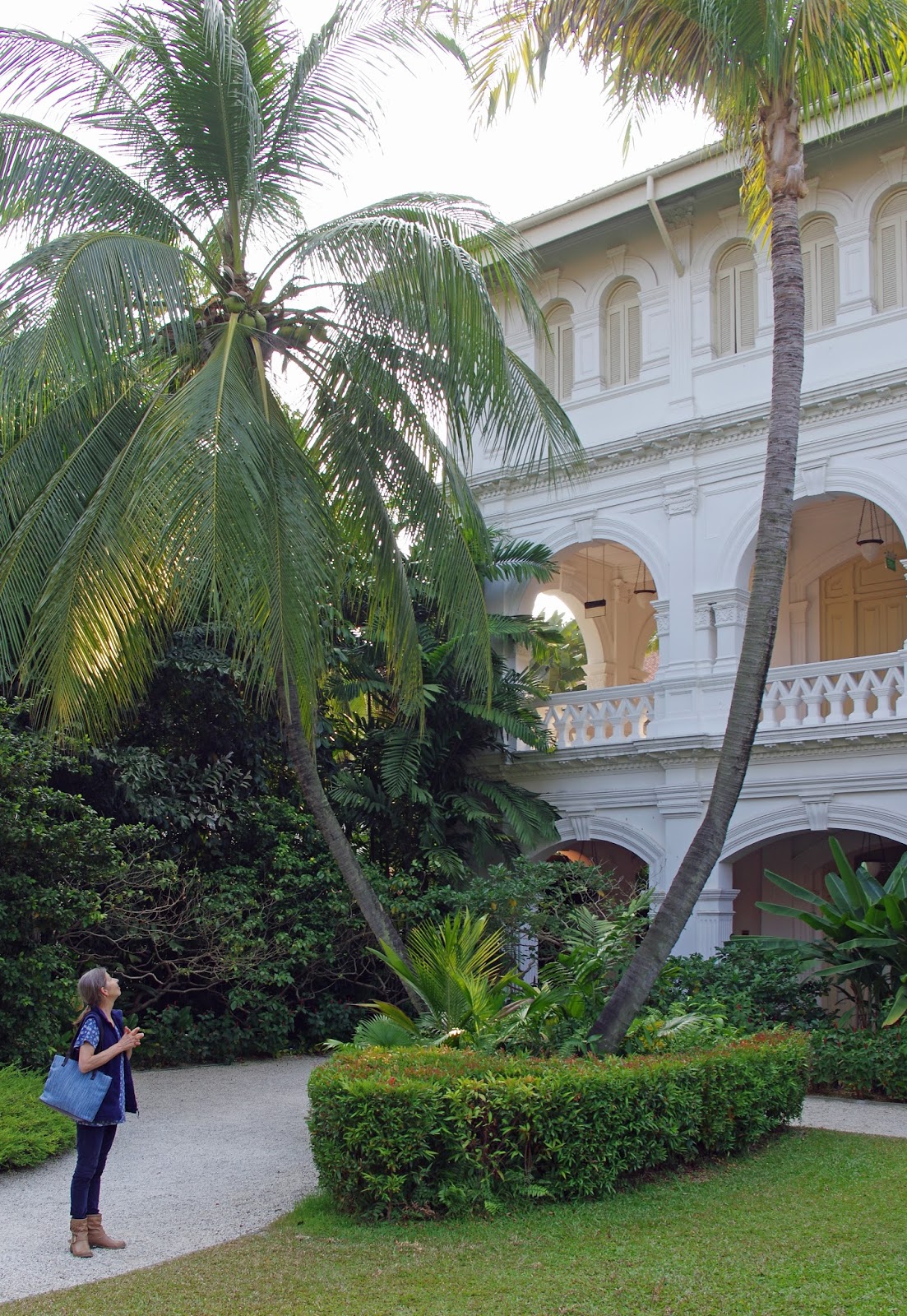 Next day: Visiting my mother, in her dementia care home, I couldn’t help but notice how her existence has certain things in common with long distance air travel.  For almost a day I was confined in a sealed environment.  Smiling attendants brought me plastic cups containing various coloured liquids: cold to make me sleep; hot to wake me up.  I was fed, frequently, with yellowish substances which stuck to my clothes and dried with a crust.  Screens flickered around me, jabbering repeated images of television shows and films past and present at me, with occasional freezing intervals of public address system interventions requiring me to sit down, tighten my belt and withstand emotional turbulence.  The only place to go is the lavatory, and to alleviate the discomfort and the boredom this becomes habitual….

Nothing happens for hours, and then nothing more.  I might doze for a while, then wake up to find that hardly any time has passed.  Someone else might snore, or cough, but there’s little conversation. The possibility that all of a sudden it will go dark, and very very cold, and that I could fall like a snowflake for six miles into oblivion is part of the adrenal entertainment.

And then, eventually, encrusted with yellowish food, and hovering between sleep and wakefulness, muddled by the intake of red and brown liquids, the hissing and crying sitting room returns to earth and I am vacuumed out into an unreal brightness, people wandering aimlessly around me, authorities staring at me without so much of a flicker of friendship, checking my ID, checking my eyes, dismissing me…..   Are these the pearly gates?  Did I die? 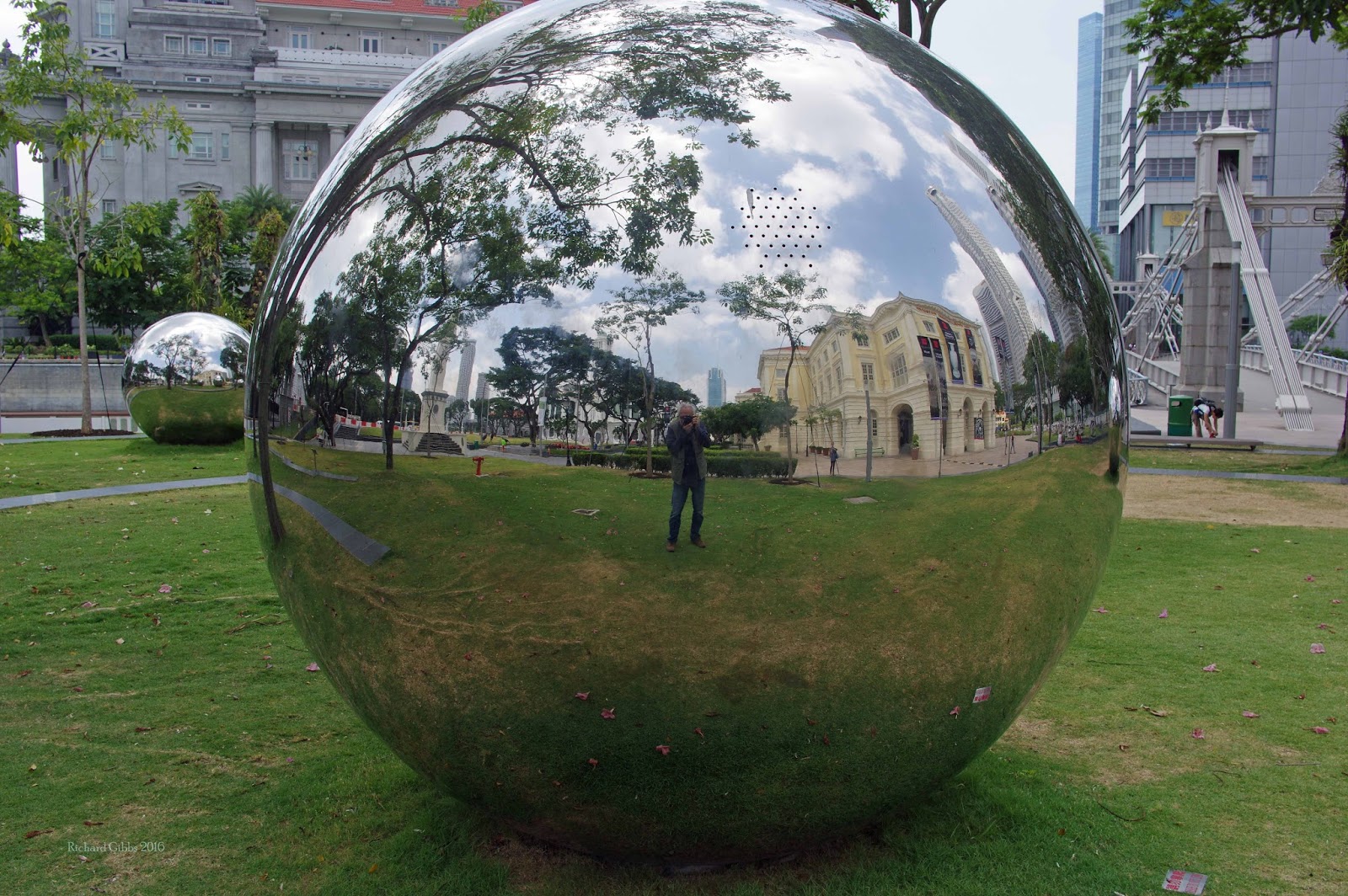 Shake with ice.
Strain into an ice-filled bottomless glass.
Garnish with a smile and a slice of understanding.
And serve with care..... 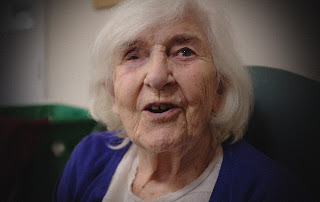