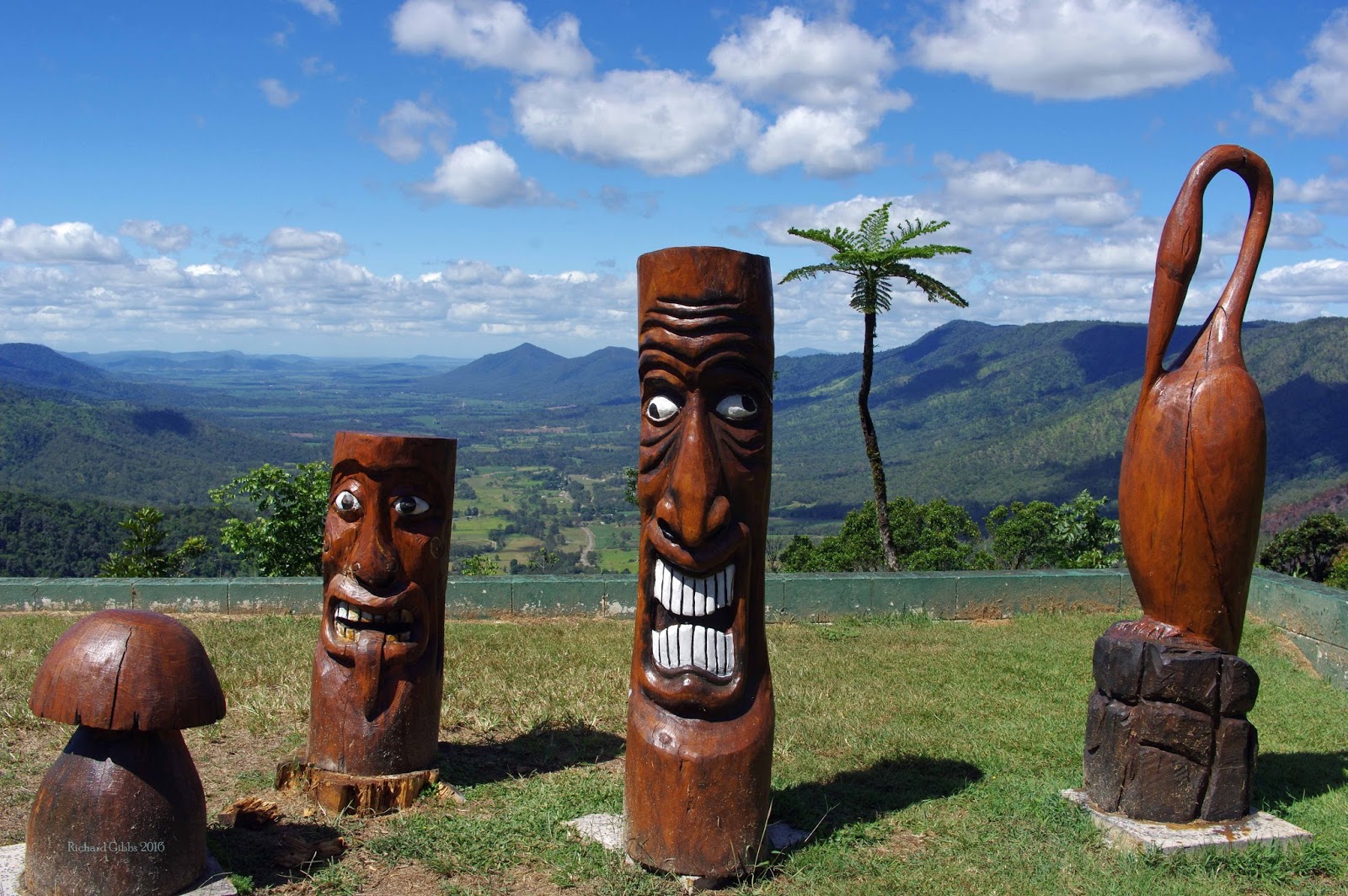 To go home and wear shorts forever
in the enormous paddocks, in that warm climate,
…..

to be walking meditatively
among green timber, through the grassy forest
towards a calm sea
and looking across to more of that great island
and the further tropics

It took about four hours to fly from Sydney to Mackay (via Brisbane), the second flight being propeller driven, with entertainment provided by a group of children who were either destined for a boot camp or a consignment of crocodile fodder for one of the Queensland amusement parks. 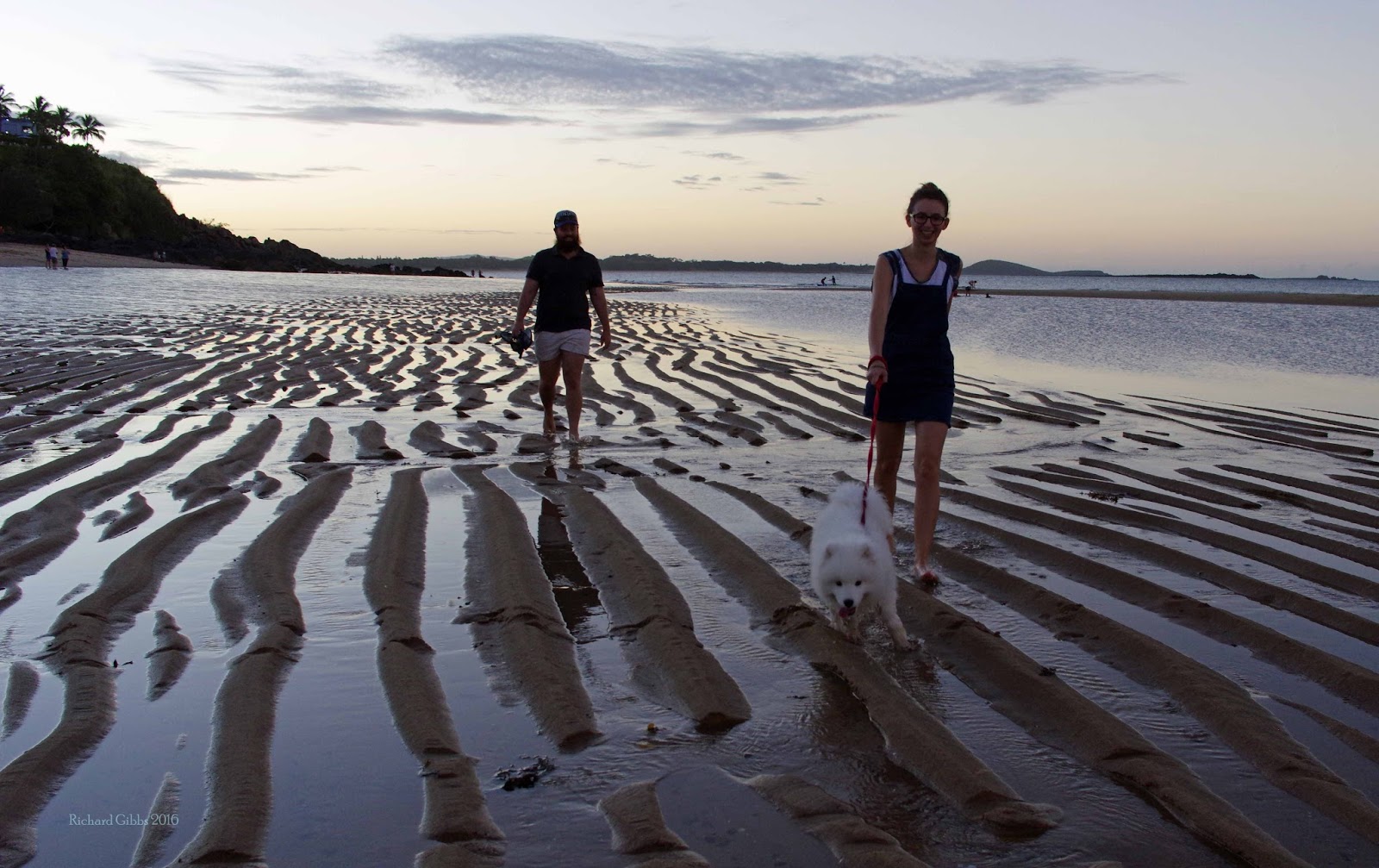 Then, once we got to Mackay, I had to learn very quickly that automatic cars do not need two feet, unless you want your passengers to exit via the windscreen…. 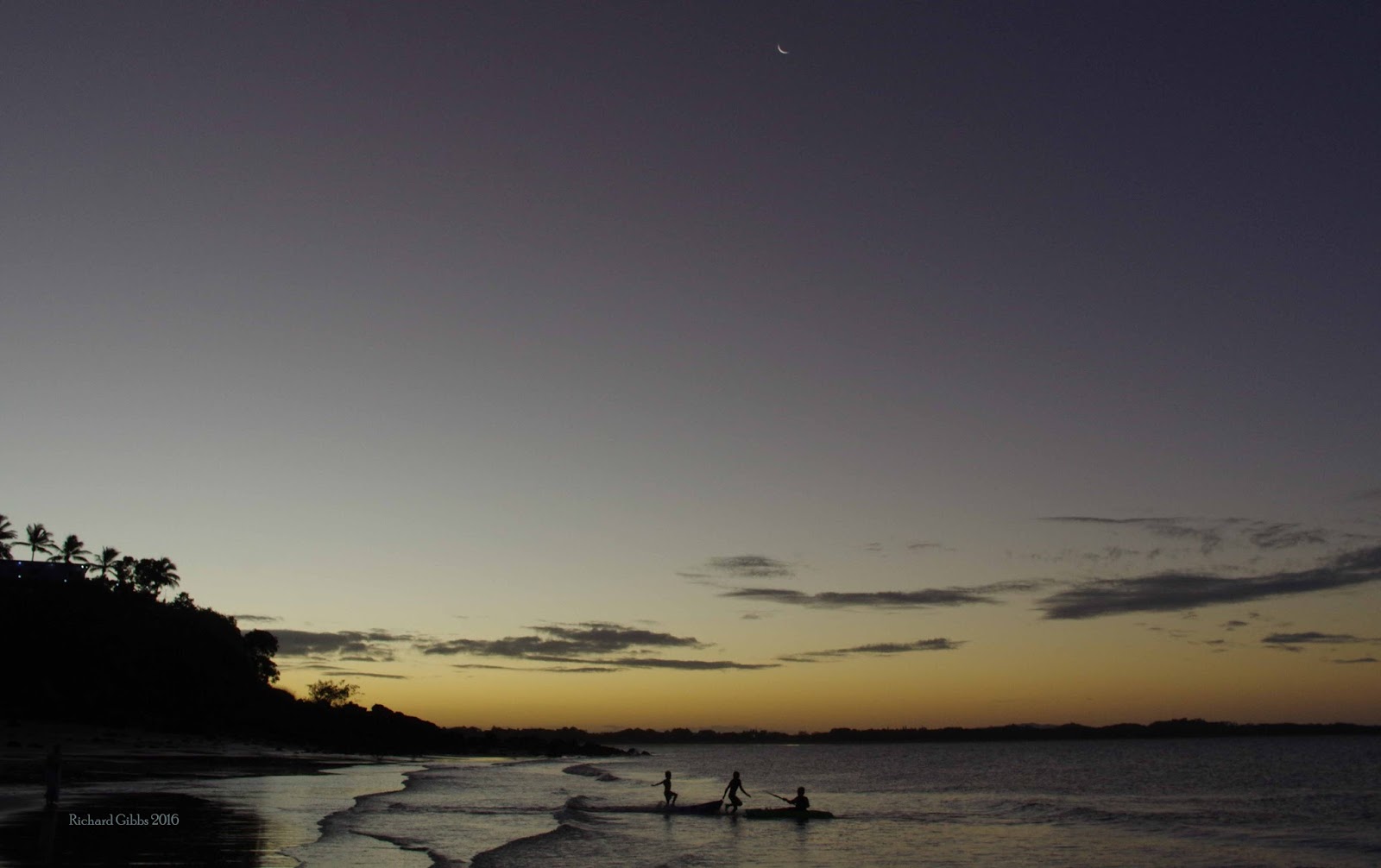 We started to get to know The ….  One leaflet I picked up exhorted us to Journey astonishingly, explaining that From iconic places to close encounters with wildlife; from adrenalin-pumping adventures to camping escapes among sandy shore, mountain gullies and colourful deserts, Queensland’s parks have something for everyone….. 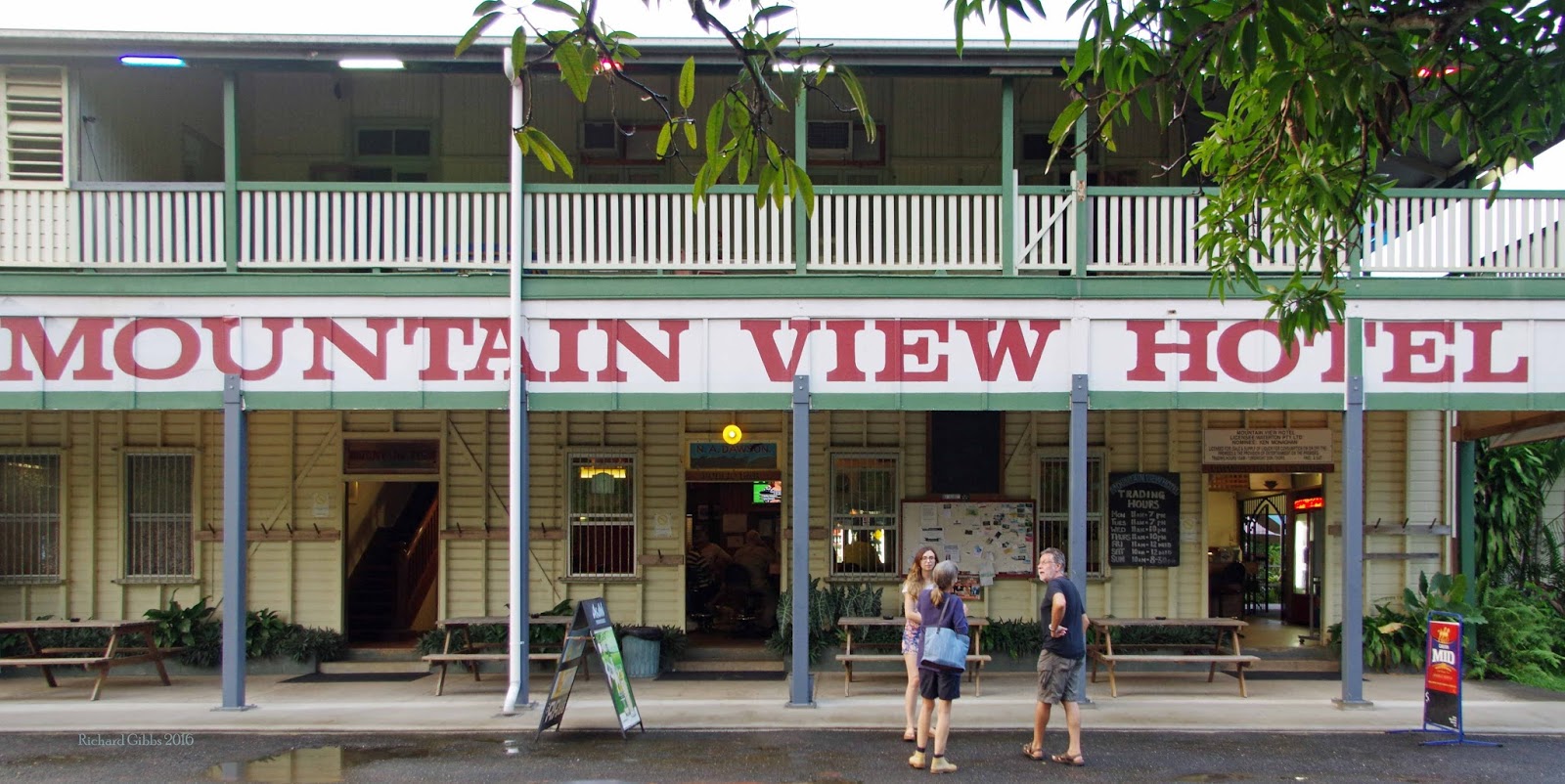 I also read, in Top tips for a great holiday:  Before beginning a driving holiday, plan your trip….. 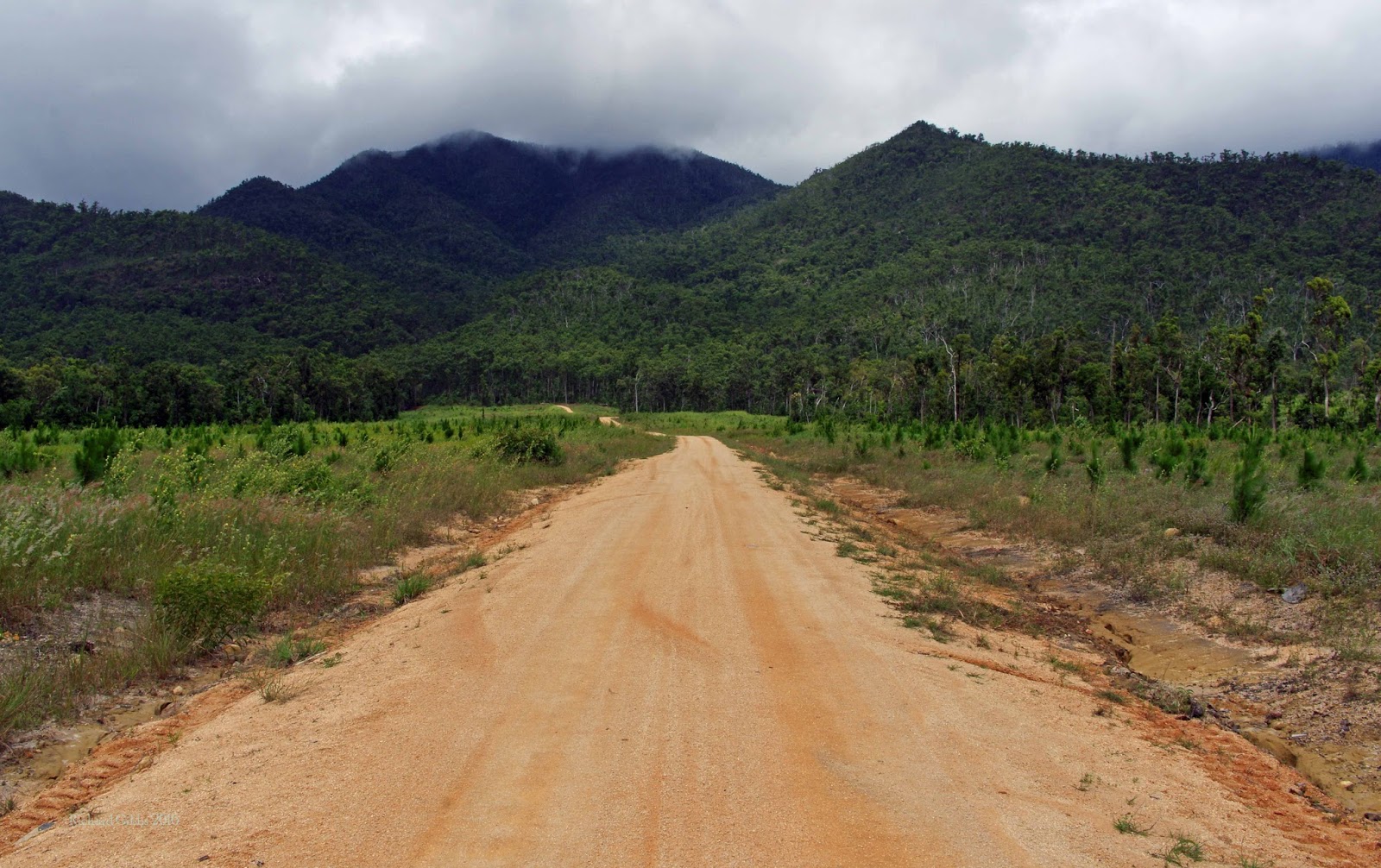 Err, I mock not….  I did plan.  But perhaps I didn’t really take into account the scale of the map I had.  We had a great time – a fortnight of tropical delight – but my Toyota Corolla clocked 2,361 kms, much of which was on the …..  Everywhere is far, in .  Sarah, our younger daughter, had said she was moving to Mackay, near … Mackay is 1,000 kms from ! 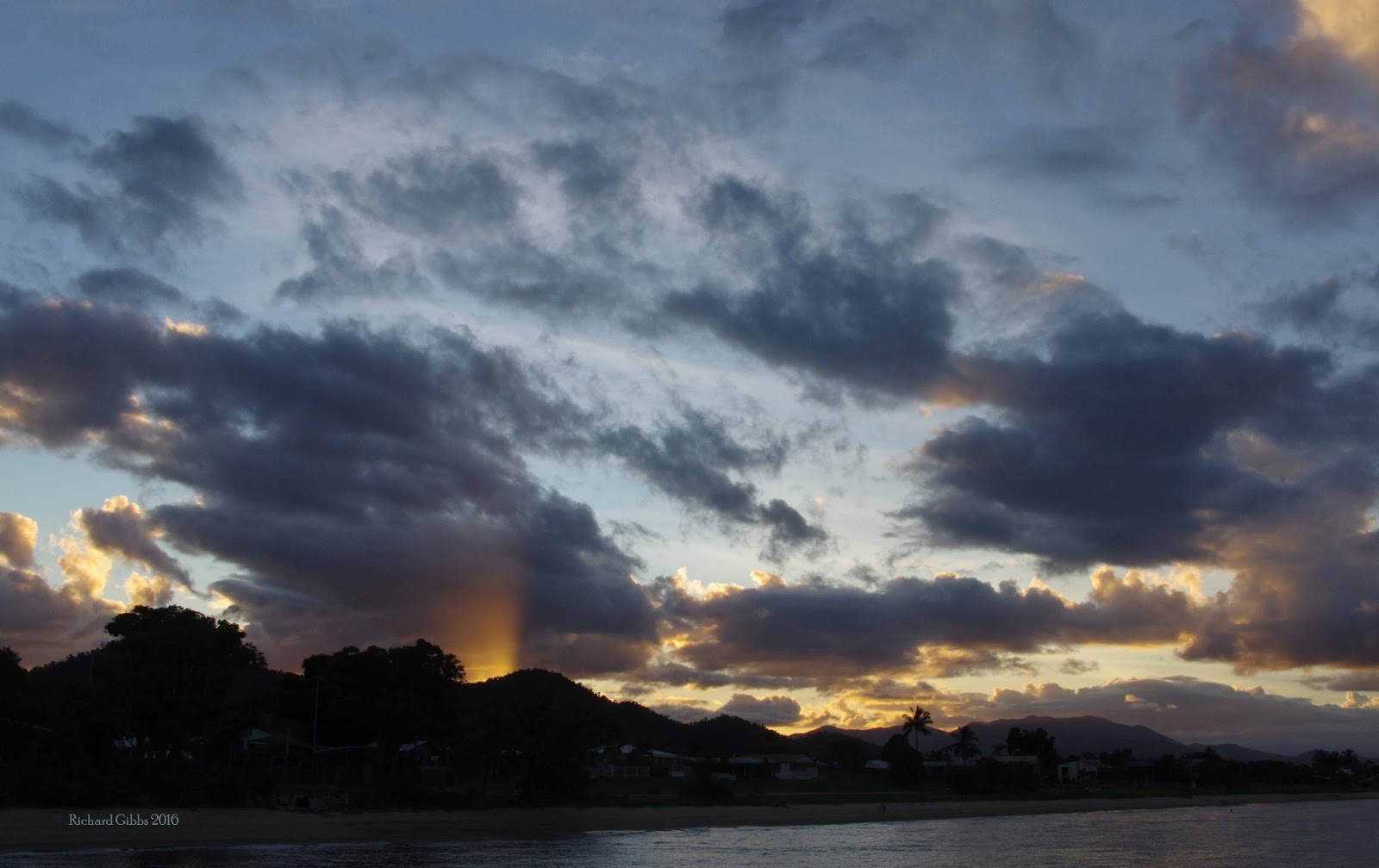 And when you are on the Bruce Highway, the scenery only changes slowly: after miles and miles of sugar cane, you get miles and miles of scrub spiked by Eucalyptus.  Overhead, various kites and eagles float in and out of your vision.  In the bush, occasional kangaroos vie for attention with various cattle.  Then, for a while, you see the sea…..  And every so often you cross a river, or a creek, or a bridge, or a creek…. Dead Man’s Creek, Alligator Creek, Crocodile Creek, Chinaman’s Creek, Five Mile Creek, Nine Mile Creek….. [And be aware, the Queensland Government  issue this warning… Swimming in creeks, lakes, rivers and dams is fun, but there are hidden dangers, which can cause serious injuries……  Be careful. It is not the same as swimming in a pool…..  Look out for crocodiles and other dangerous marine animals.]

has much to offer – snakes, spiders, crocodiles, cassowaries – but there is plenty of space.  It is nearly 8 times the size of the whole of the , though the has nearly 14 times as many people (which means that the has a population density 88 times that of ). 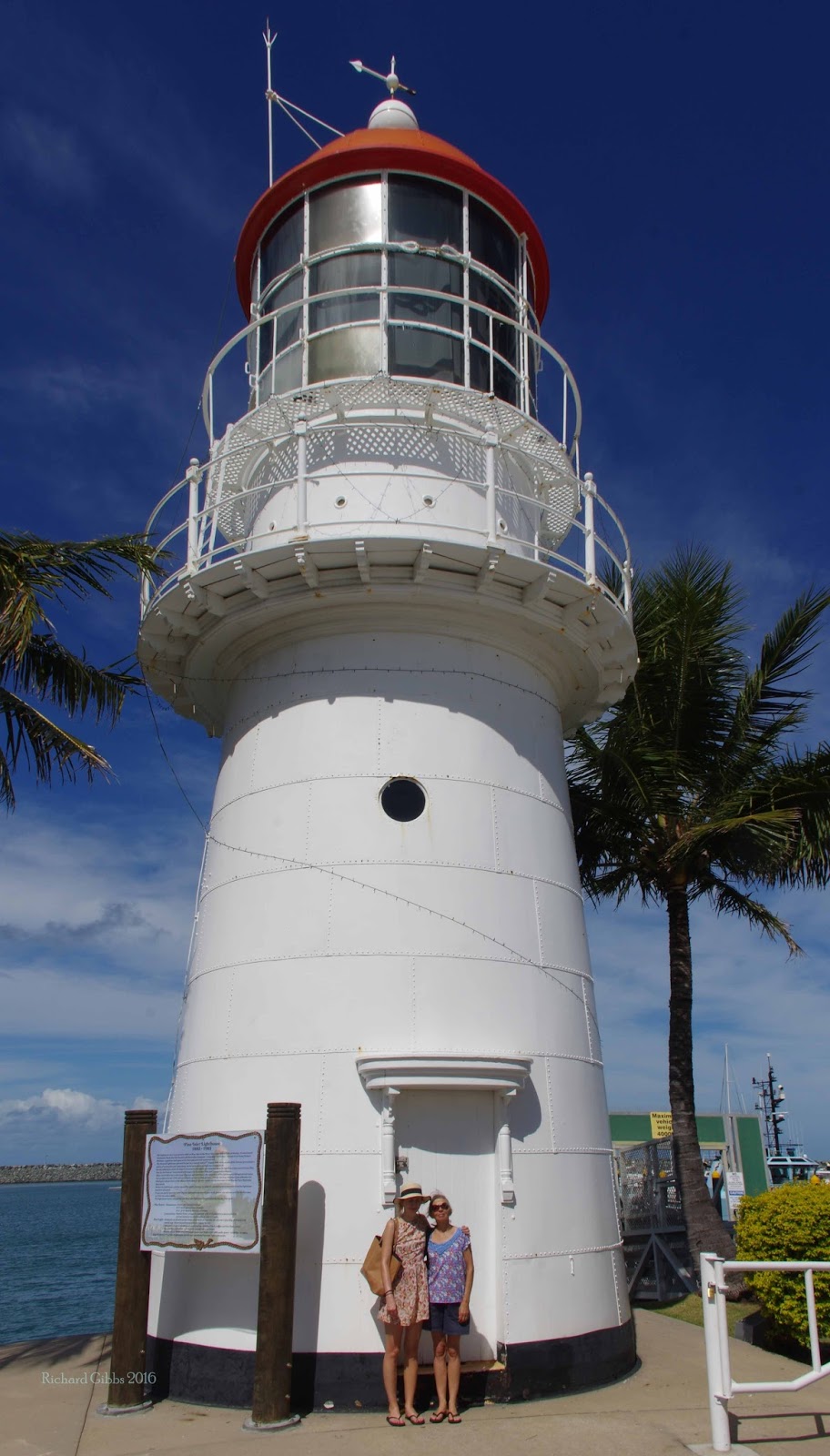 So it takes a little getting used to!  But Eungella, an hour or so from Mackay, or the smug-druggling marina, or the historic Eimeo Pacific Hotel - an enviable reputation: “lunch with a million-dollar view“. It is has been in the same family for over 70 years; We acclimatize, gently perspiring in the heat, and topping up with 50 Lashes…. 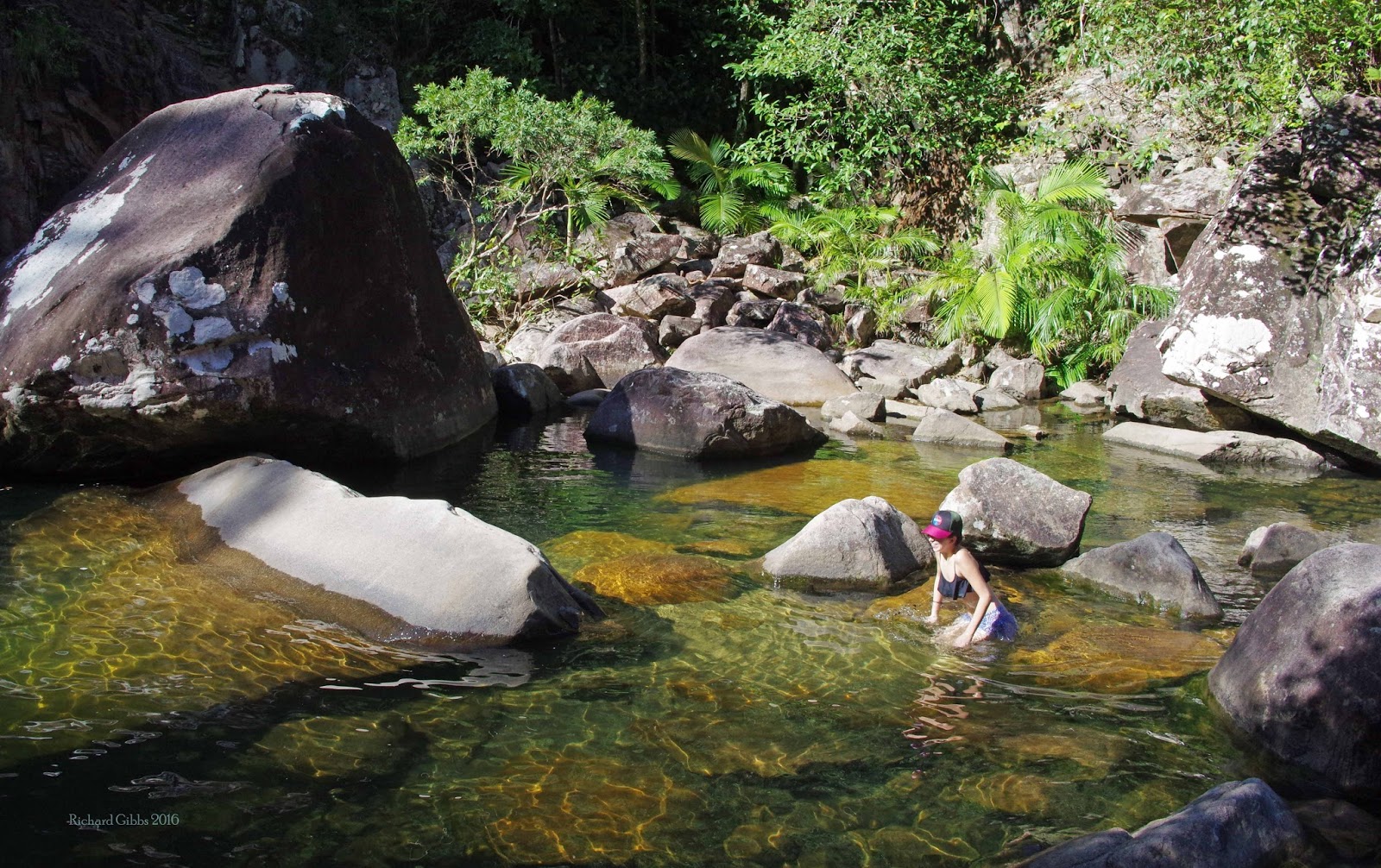 We drift up to Eungella, seeing no platypuses, but enjoying the rain forest, the views down the valley, and swimming in the Wheel of Fire Falls, up the Finch Hatton Gorge. 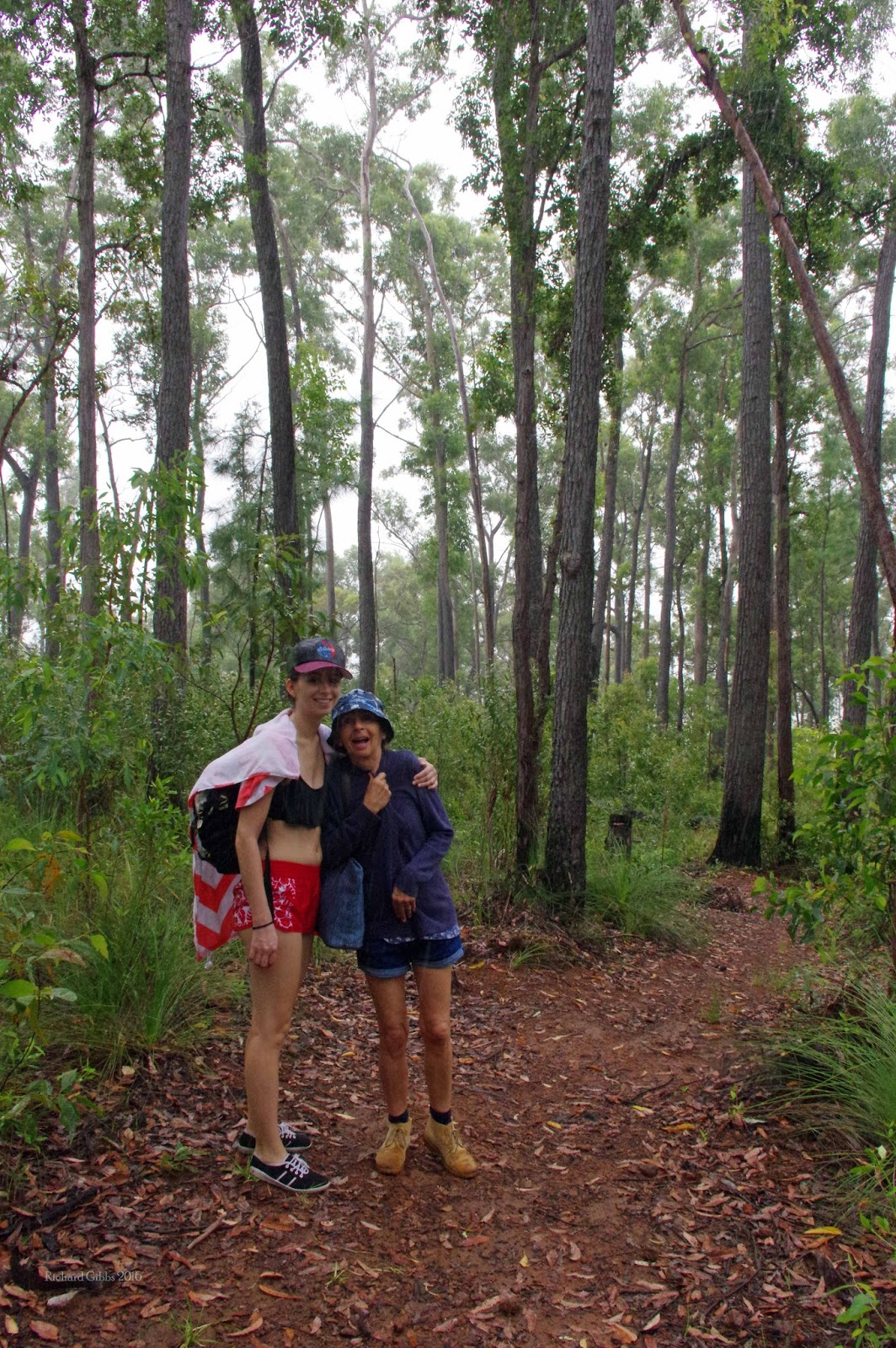 We drive to Cardwell at the Beach, from where we take the forest drive and hike up to the , before dropping down to the Spa Pool, where the water bubbles and swirls in the rain….. 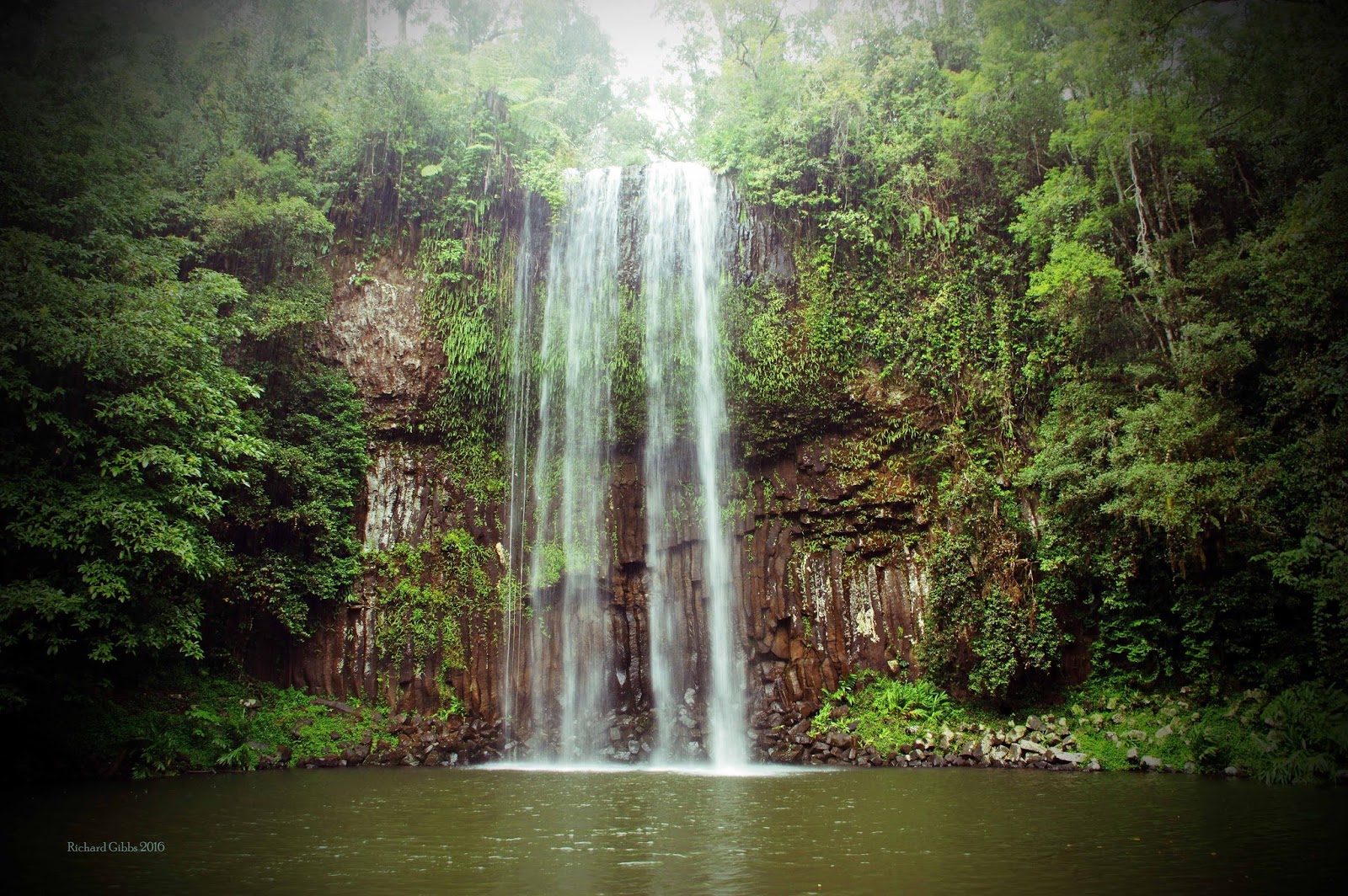 Next stop is , via the Atherton Tableland, and the Waterfalls circuit, and some extraordinary fig trees.  We are looked after in great style by friends just off the once gated , their garden filled with Honey Eaters and Sunbirds, their fridge filled with beer….. 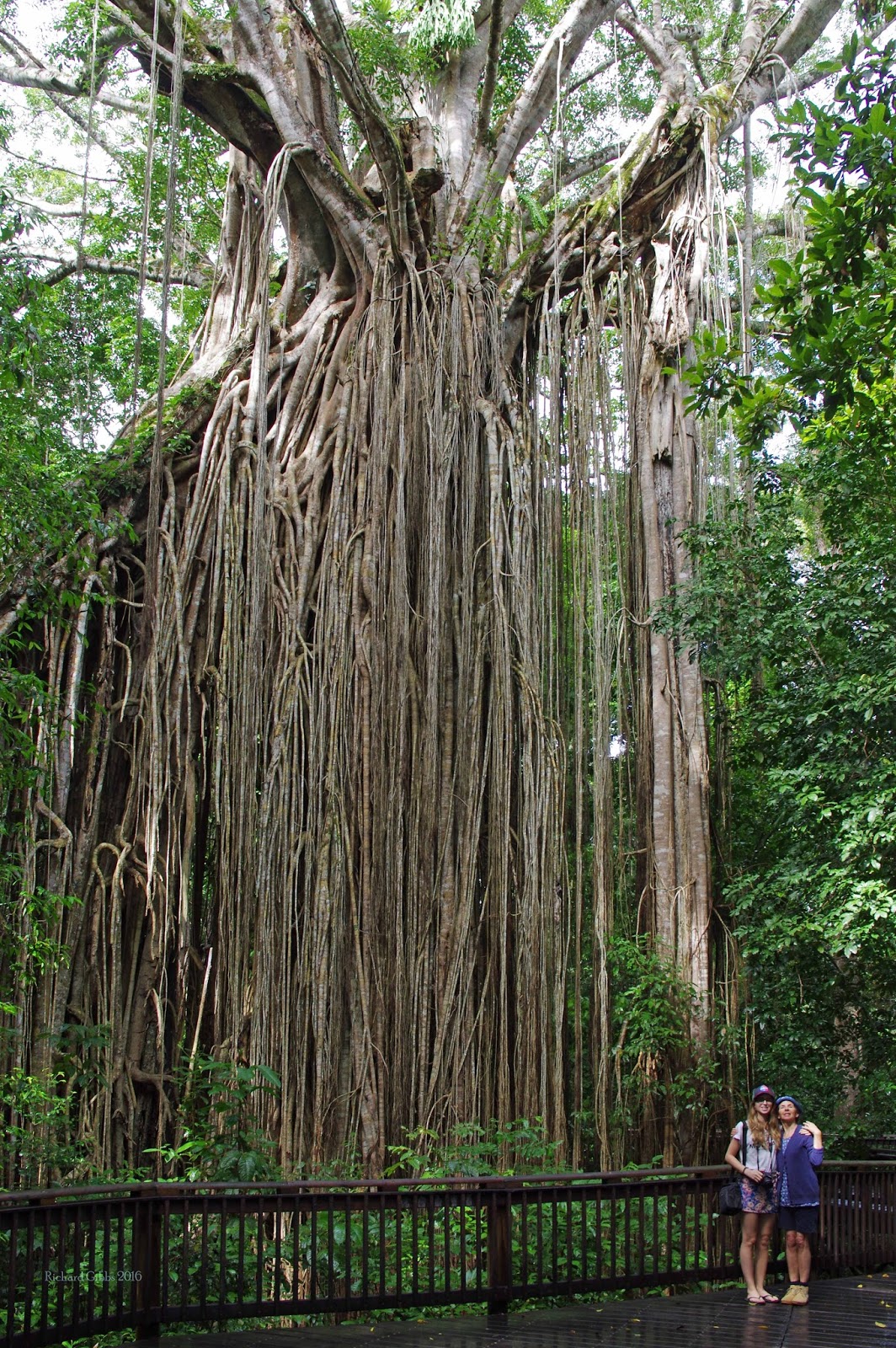 Then Port Douglas, where the Sunday Market says buy me! With every hat, shirt, and honeyed banana….. 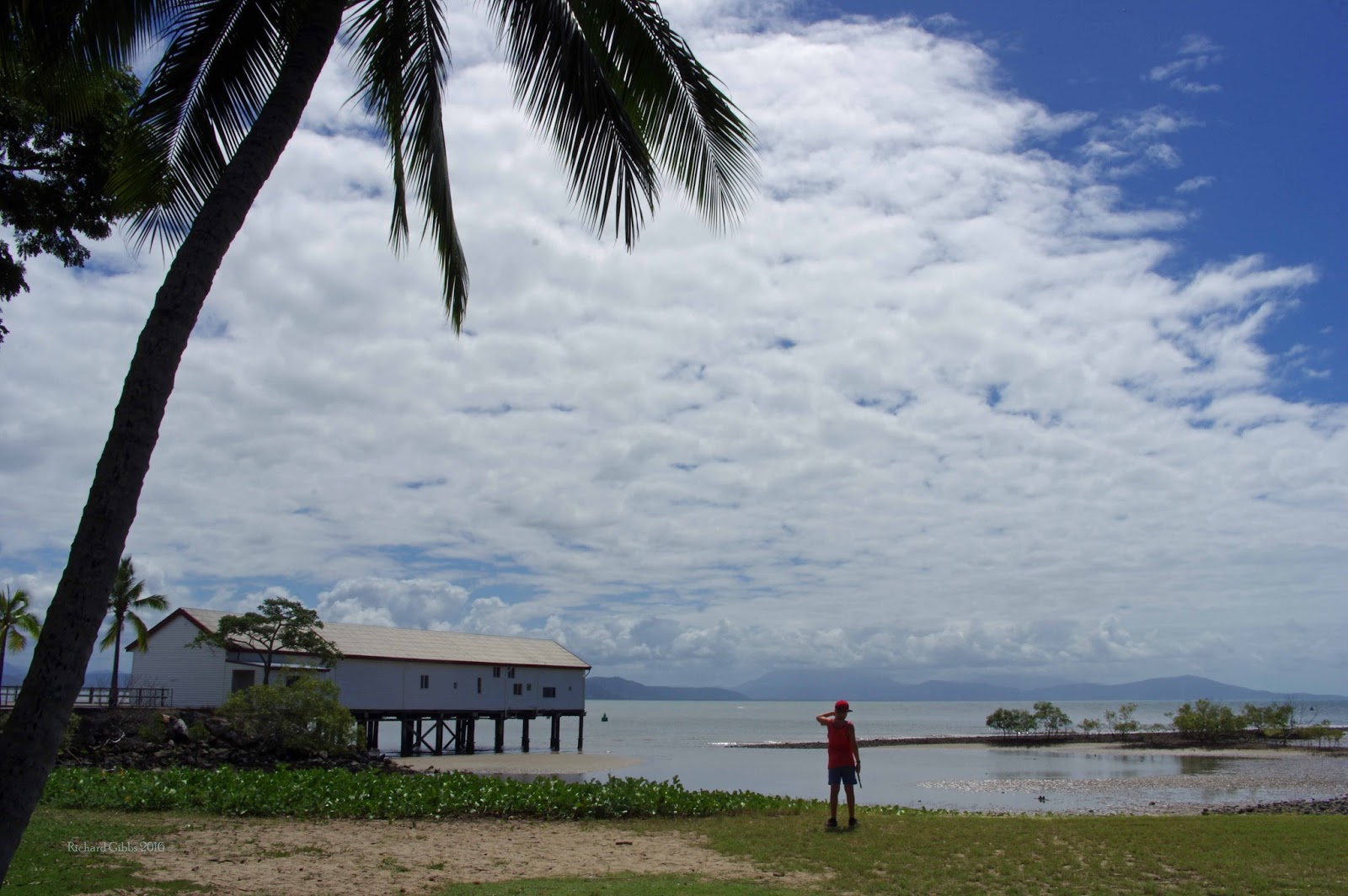 Then Daintree, where the crocodiles are camera shy (I learnt to my cost that Crocodile Watching lacked a comma), 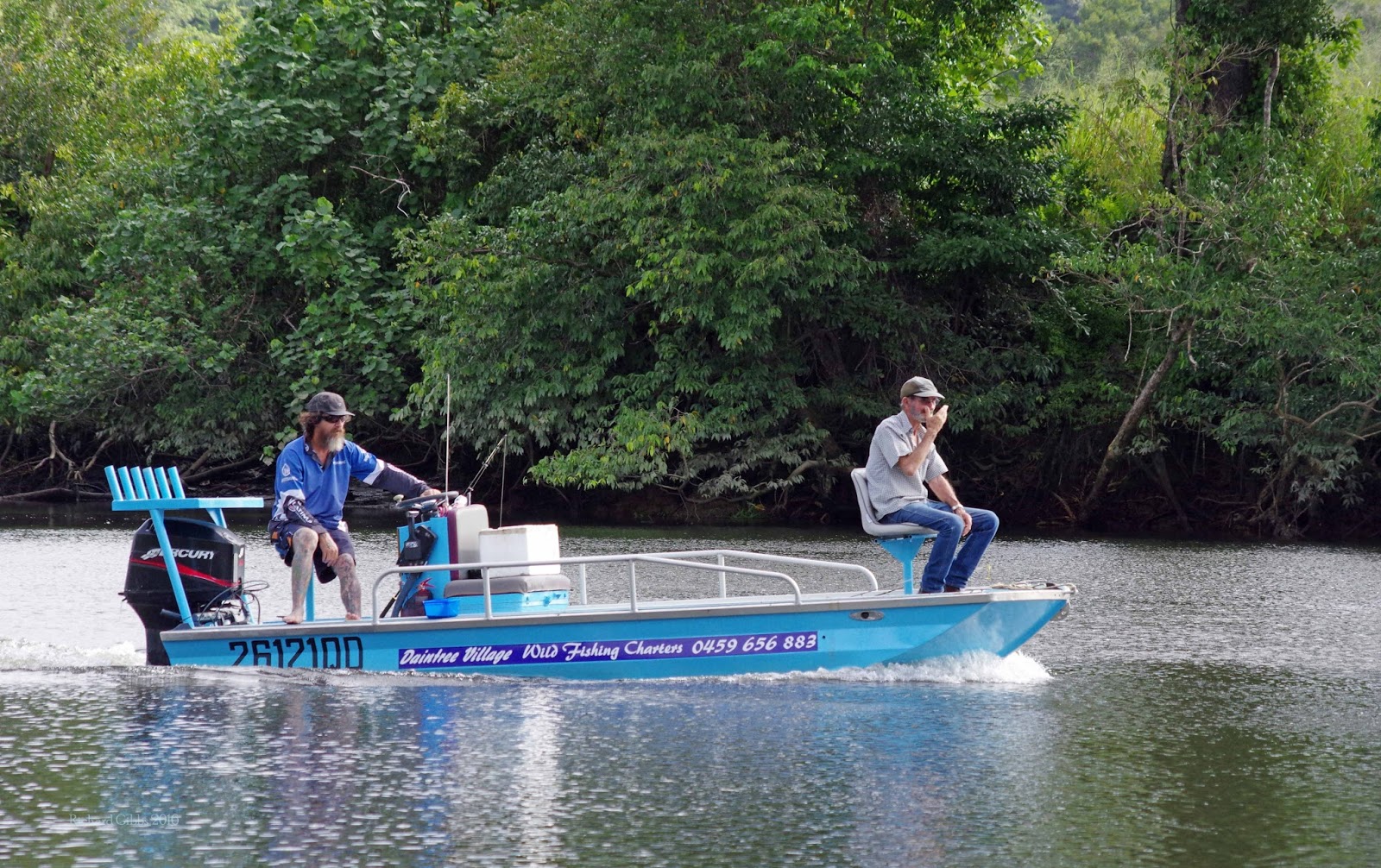 but where our guide, whose grandmother settled here in 1901, exuded a certain local authority, especially when indicating a three metre long python…. 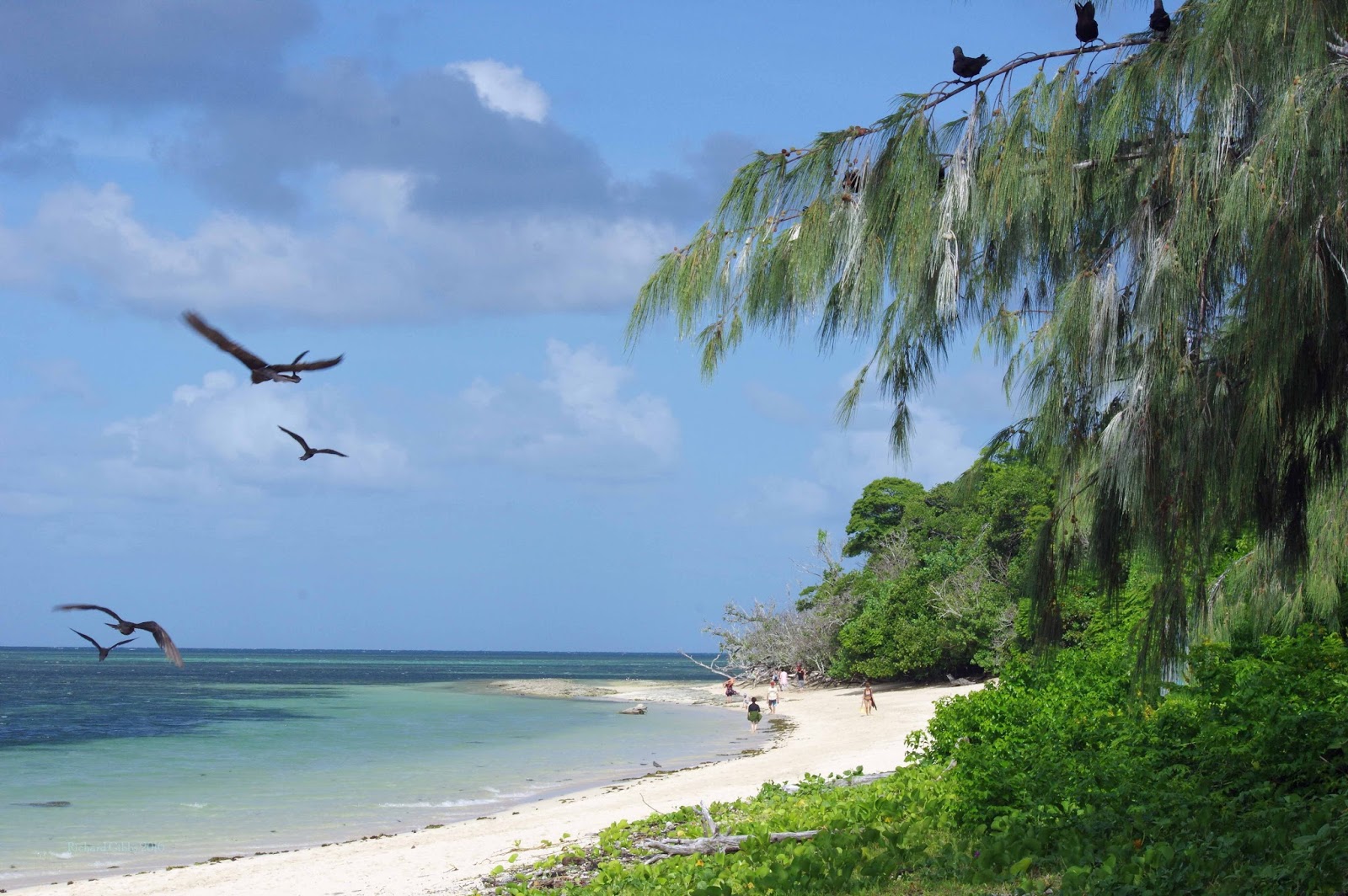 We then went island hopping, from Green Island, a coral atoll off Cairns teeming with Chinese, and Common Noddies (no less beautiful for this), to Magnetic Island, so called because the buses suck all the metal from your pockets….  To and the deluxe Whitsunday group. 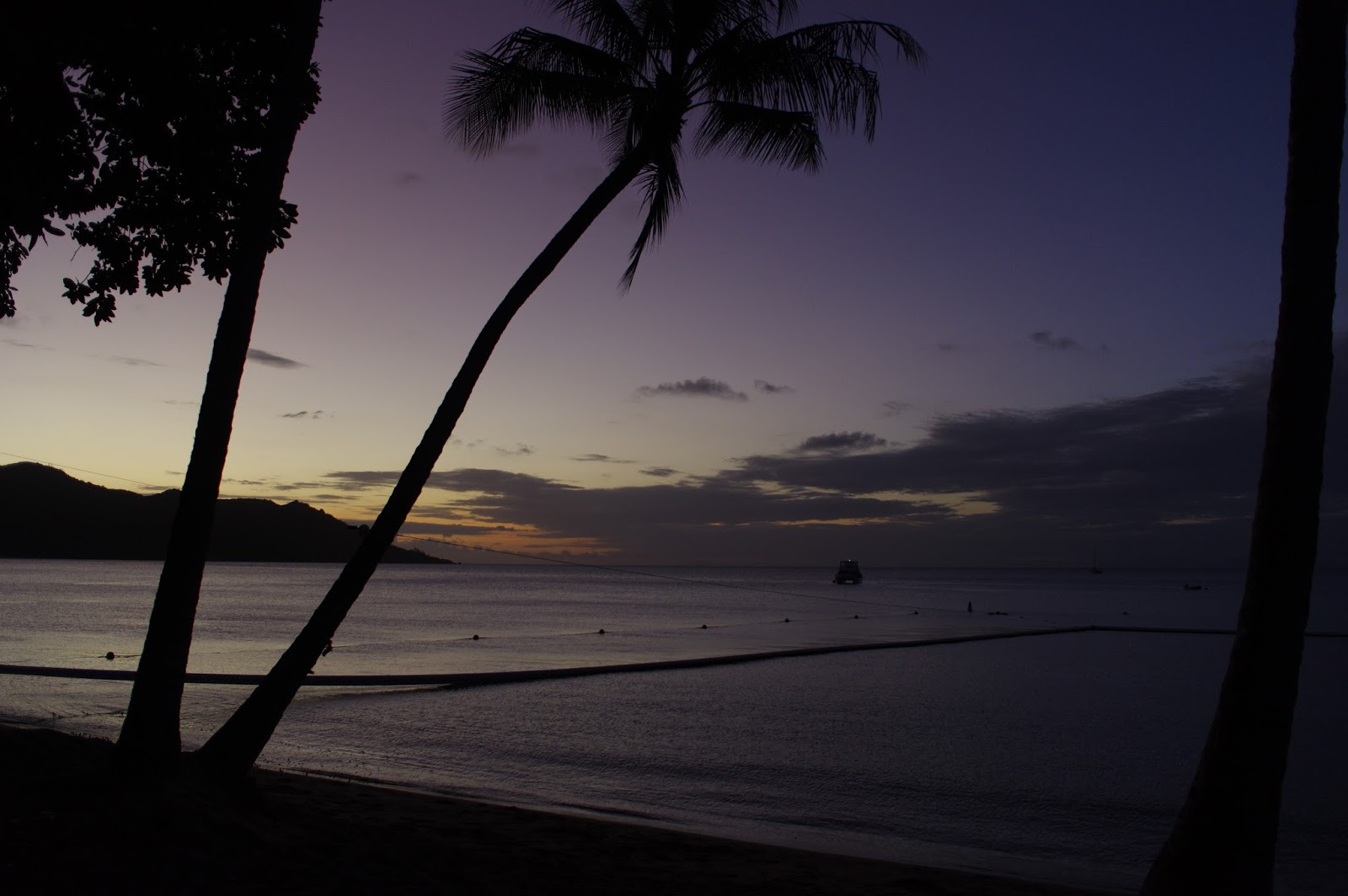 Here, I have to say, as a celebrité manqué, I felt most at home.  Little reminds me more of home than a view of the tropics at sundown, palms swishing to the wingbeats of hungry cockatoos, fruit bats gently darkening the dusk, beers served in the middle of a swimming pool from a thatched bar with underwater stools…. 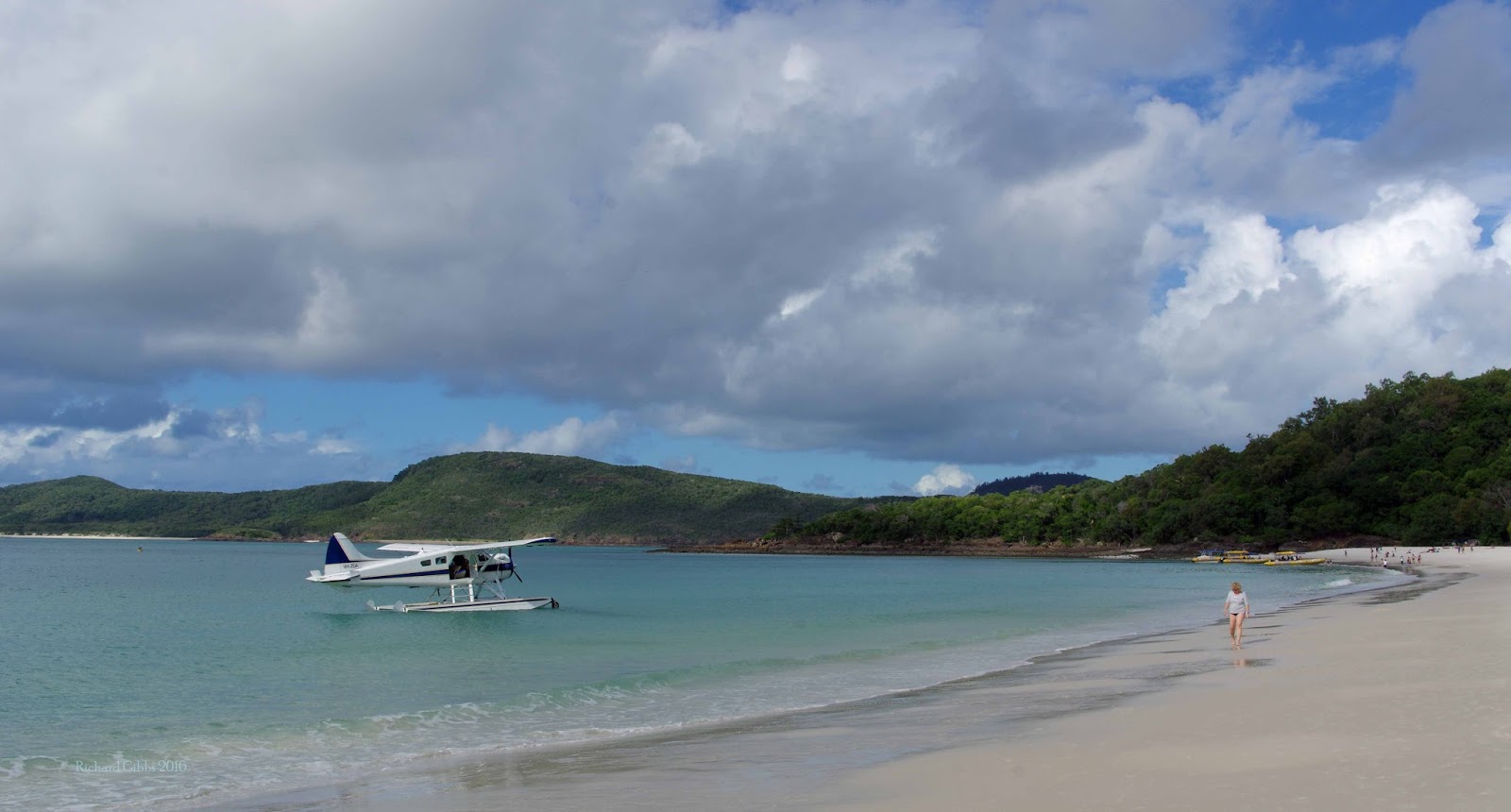 We took a day trip to Whitehaven beach.  There was a storm breaking on the horizon, and I was struggling to squeeze myself into a stinger suit, but, even so, this was the most beautiful beach I’ve ever seen…..

Seven kilometres long, and is entirely squeaky white silica.  The sea is blue, and the beach is fringed with palms – there are NO buildings!

The storm faded; sunshine broke through; we swam without getting stung. Then it was time to board our cruiser again, and leave the scene to the magic of a tropical evening. 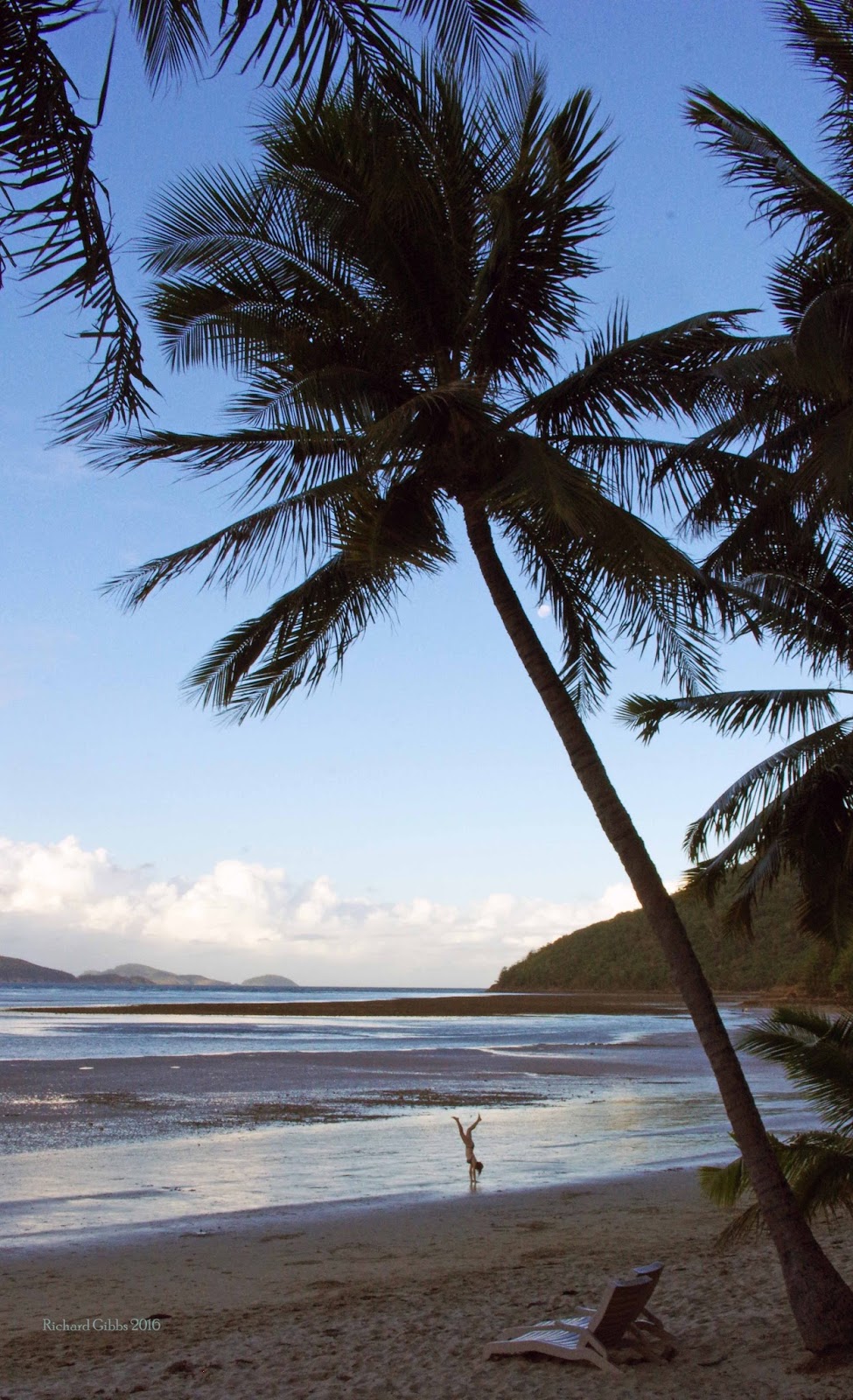 On the way back to the marina, our skipper pointed out a house amongst the forest near to , George Harrison’s house.  He used to like playing his guitar in the hut in the garden….

As a lifelong Beatles’ fan I was fascinated, even though George Harrison died (I cannot believe this) fifteen years ago.  He and his wife Olivia came here in the 1980s, when the island was undeveloped, and made themselves a hideaway – natural materials, thatched roofs, swimming pool through the lounge, no-one else around (George had been traumatised by Beatle mania and sought isolation).  Ironically, this beautiful refuge was eventually spoiled by the cruise boats going past reciting, And on your left you can see George Harrison’s house…..

However, after George’s death, the house, named Letsbeavenue (with thanks to Tommy Cooper) was left to decline, nature reclaiming it slowly, until a year or two ago it was sold for $8.5 million, though the sale was not without hitches.  The prospective buyer refused to accept sub-lease clauses imposed by the owners of the island, Hamilton Island Enterprises Limited….. 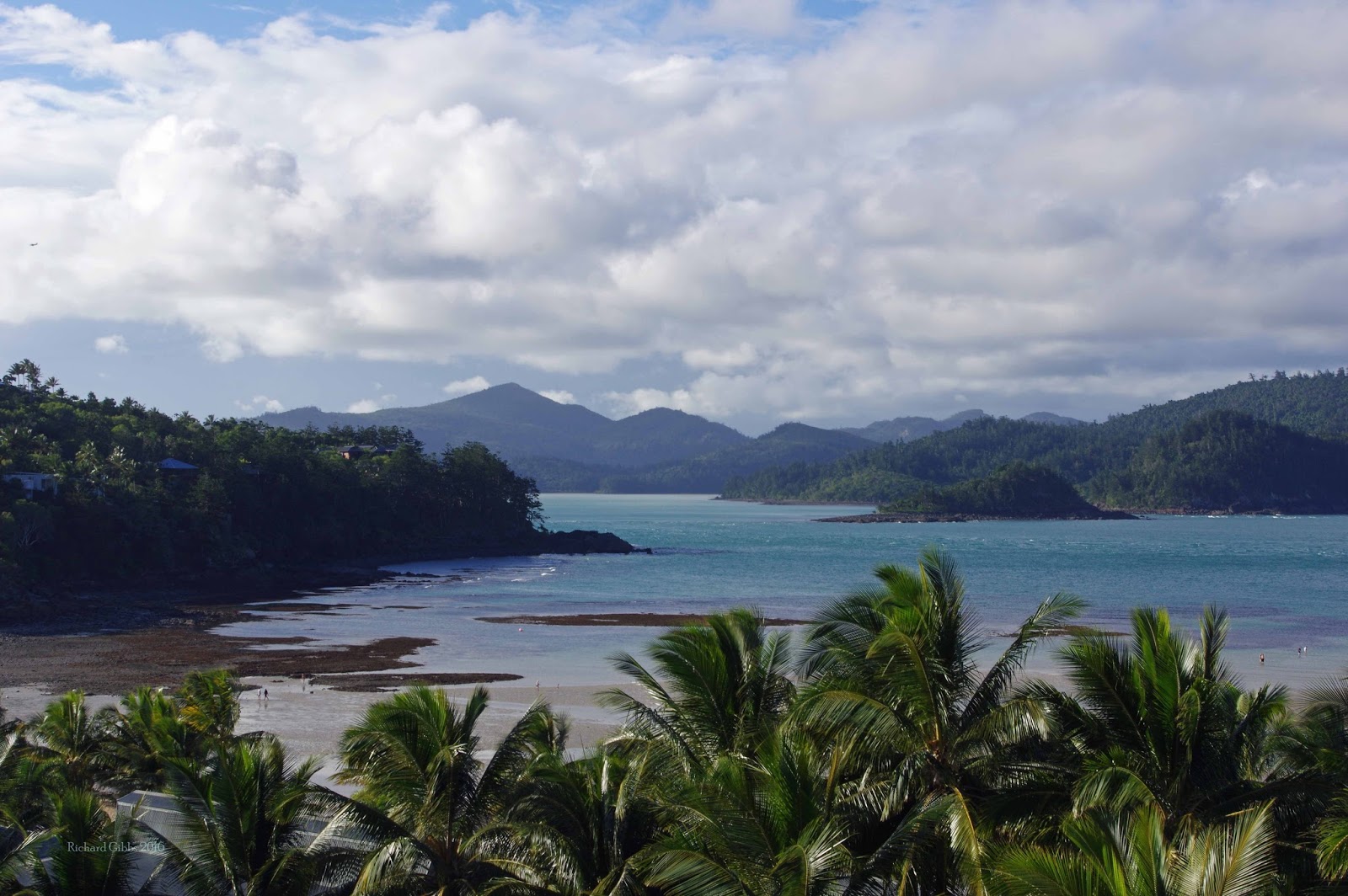 Which may perhaps explain why the Whitsunday islands are as close to paradise as I will ever get.  Despite the developments, they retain exclusivity.  Since George set up a retreat here, Nicole Kidman has followed suit, and, recently, Taylor Swift stayed for a while, befriending a Cockatoo and playing to a select 100 at the Yacht Club. 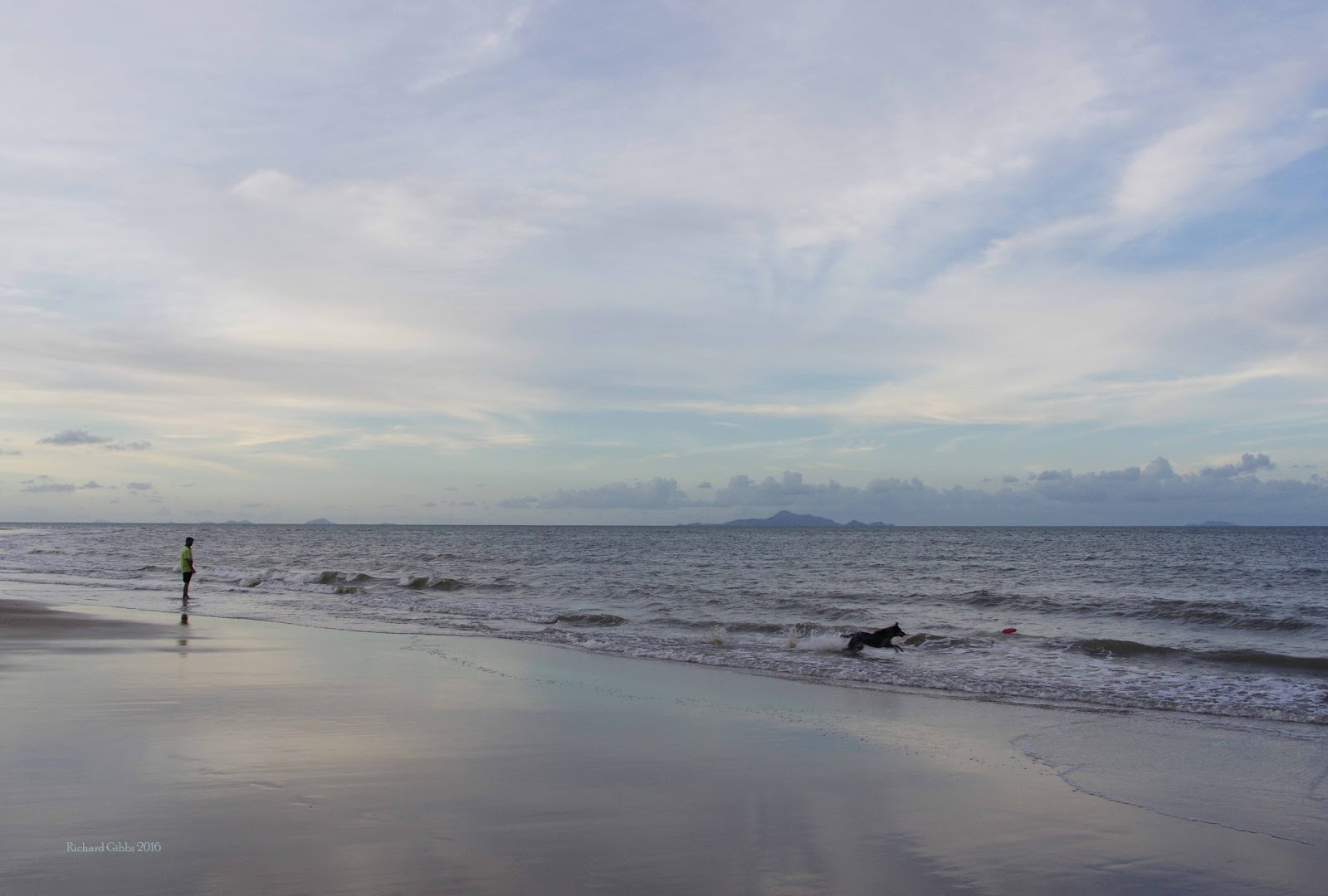 This is a special place to stay.  The Qualia Resort has apartments with private pools and personal butlers (at £1,000 a night B & B!)  We opted for the more modest Reef View Hotel and had a stunning view of palm fringed tropical seas from our balcony, as well as complimentary use of kayaks and sailboats, paddle boards and snorkeling gear. 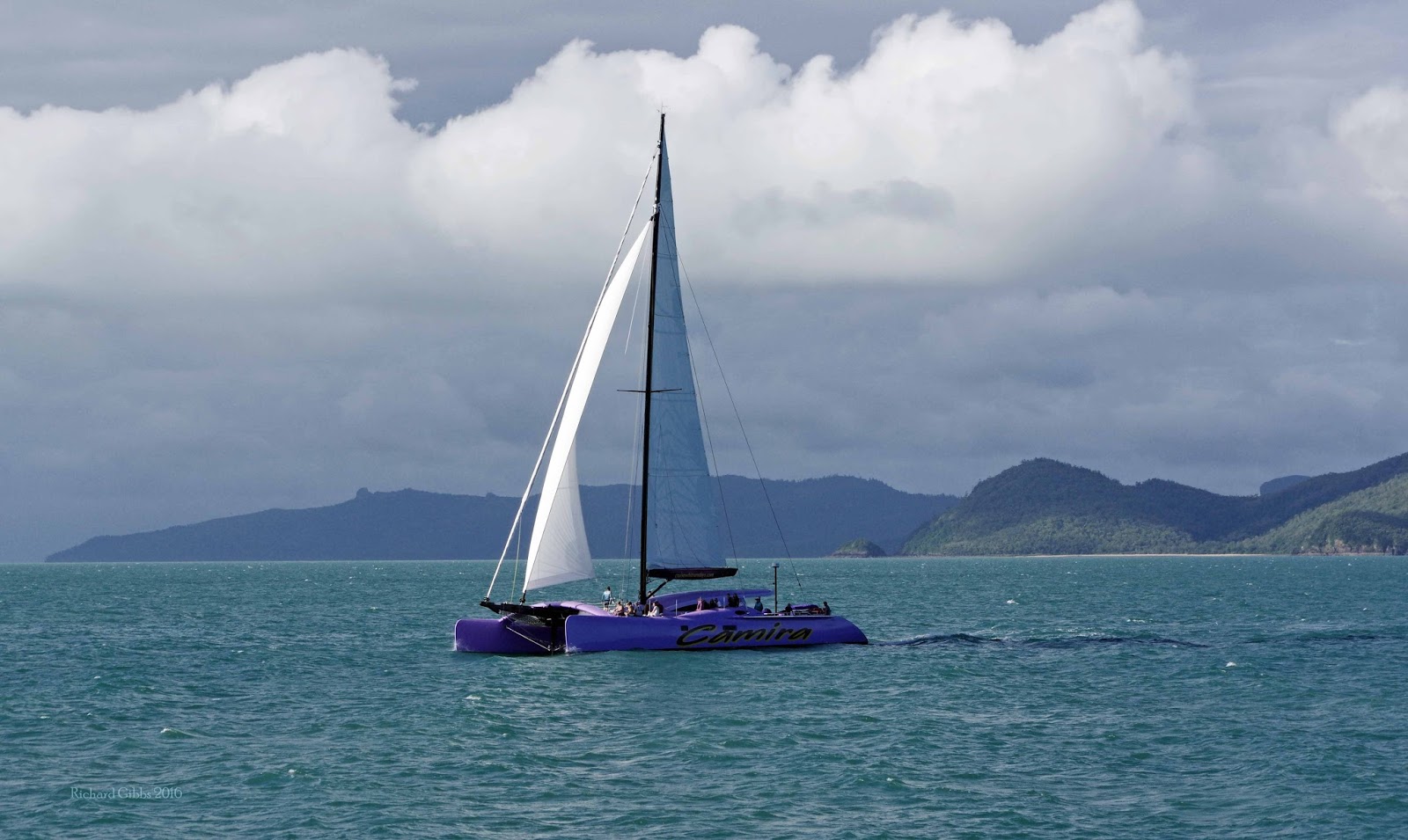 The top place to dine is the Yacht Club, designed by Walter Barda and opened in 2009, splendidly perched above the with breathtaking views across Dent Passage.  Alternatively you could spend the evening at Italian-style Romano’s, or at the Marina Tavern, a lively place to take the family.

The Whitsundays won’t be the same as when George and Olivia first set foot here, invitees to the Australian Grand Prix by their friend Jack Brabham, but they still aren’t far from paradise…..

Ah well, ‘tis good to dream….  Back to , a quick wheel change (slow puncture – it happens) and thence back to Mackay, and more dog walking at sunset on the beach…. 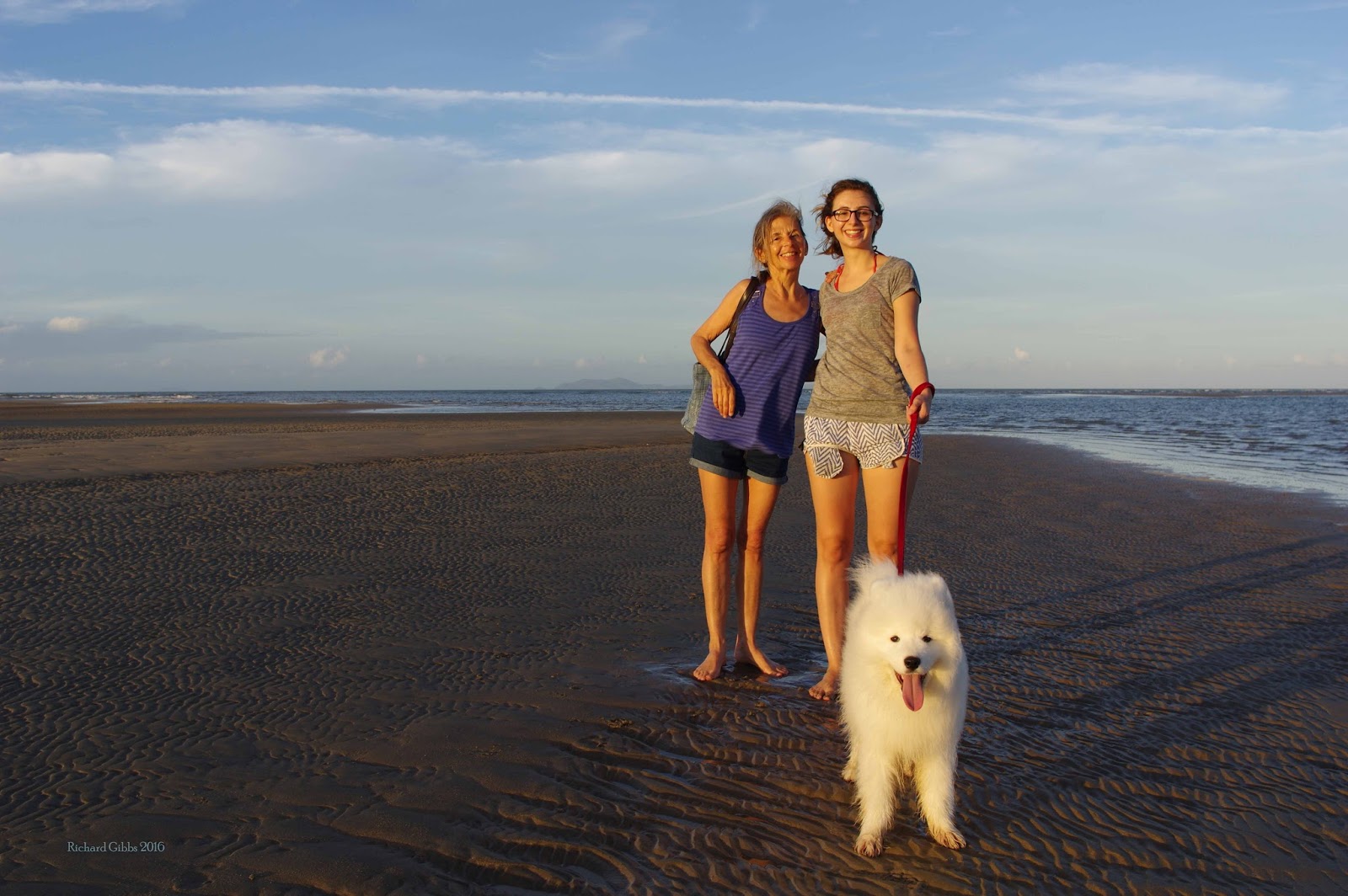 Les Murray knows a thing or two. It could be a lot worse, especially when the sun shines and you feel that it's good.....

To go home and wear shorts forever
in the enormous paddocks, in that warm climate, 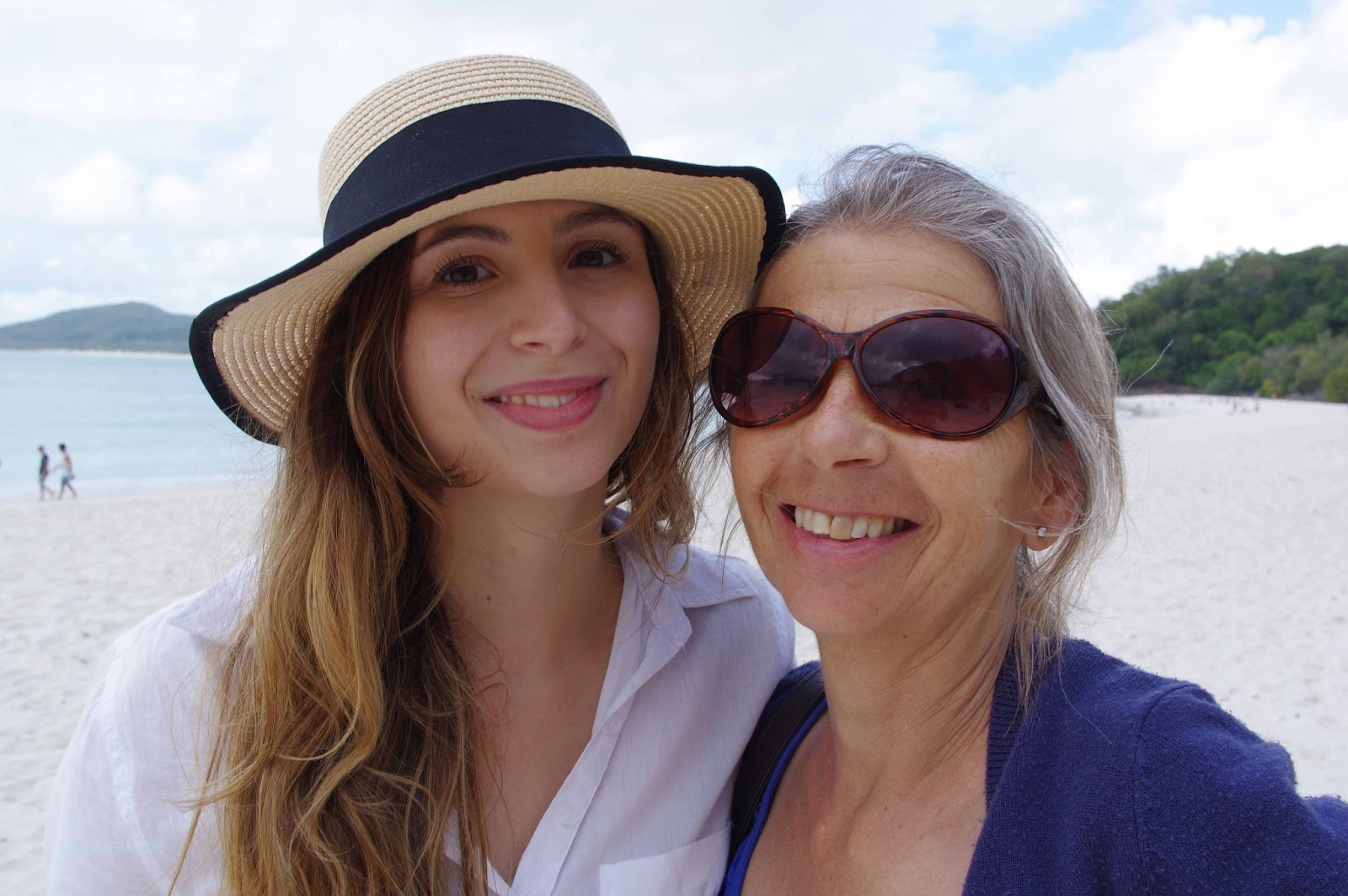 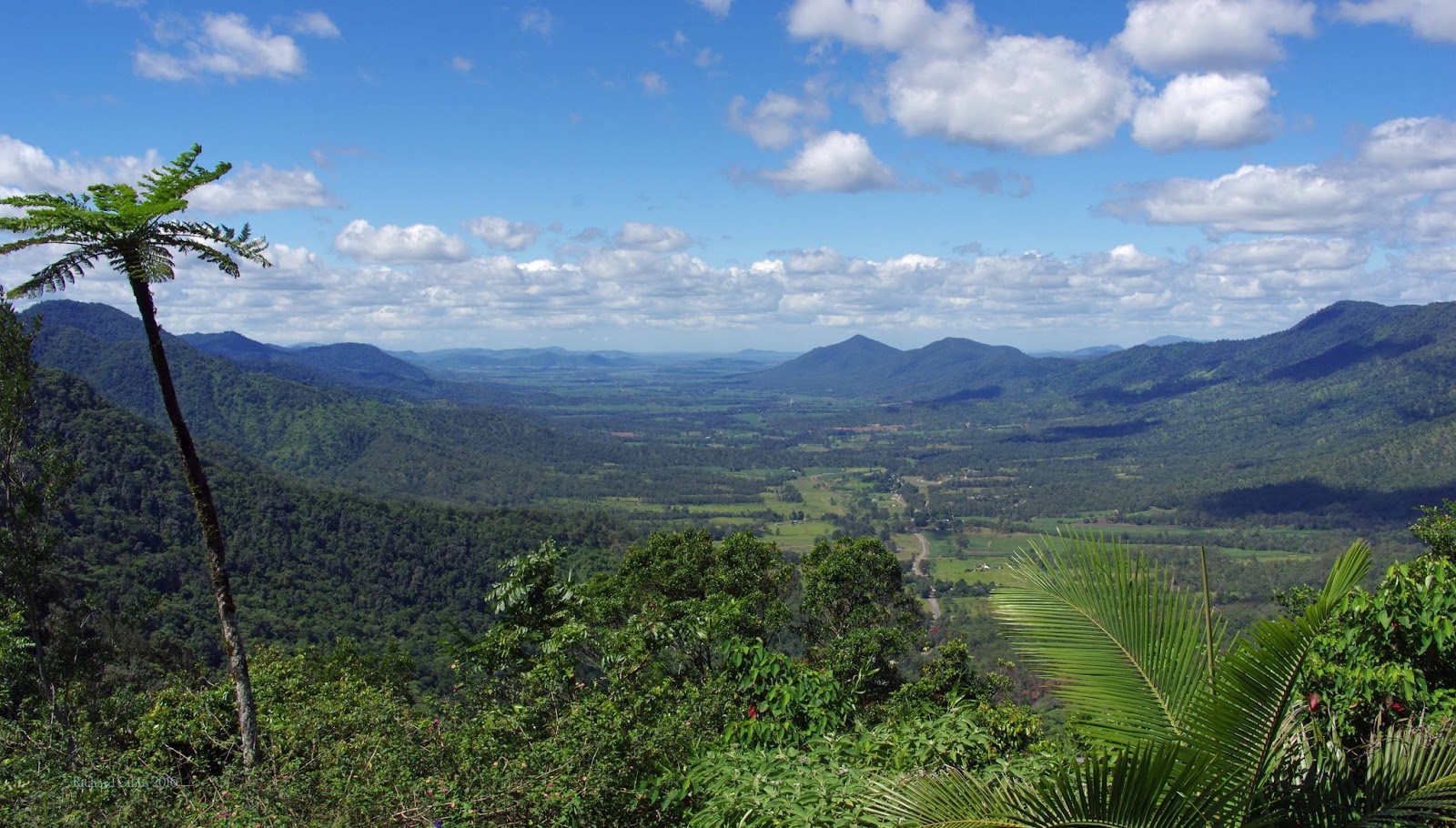