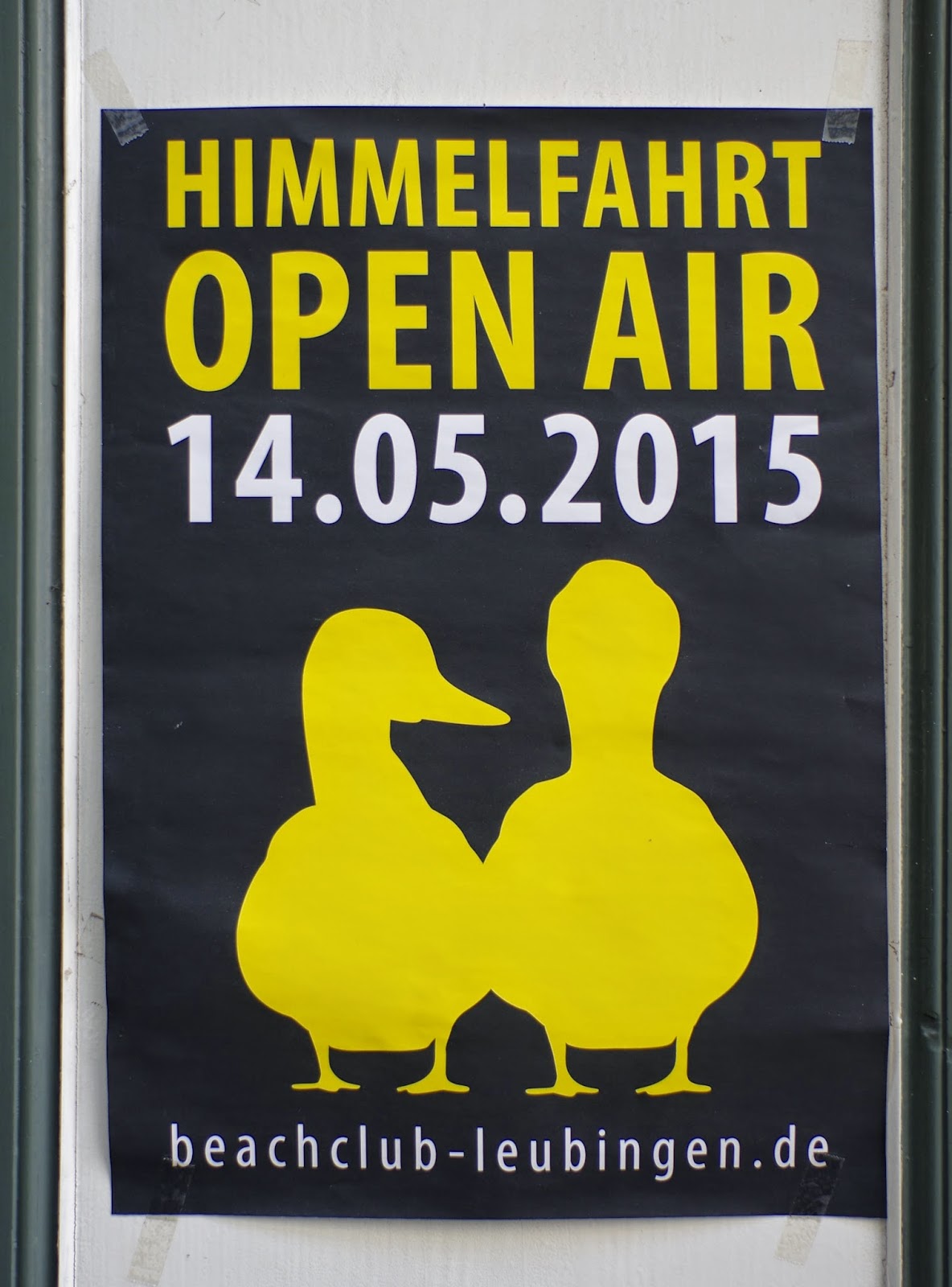 Excuse my ignorance. I had not been counting. The fact that May 14th was the 39th day after Easter Sunday took me by surprise. And, moreover, I was not expecting a Thursday to be a public holiday.... 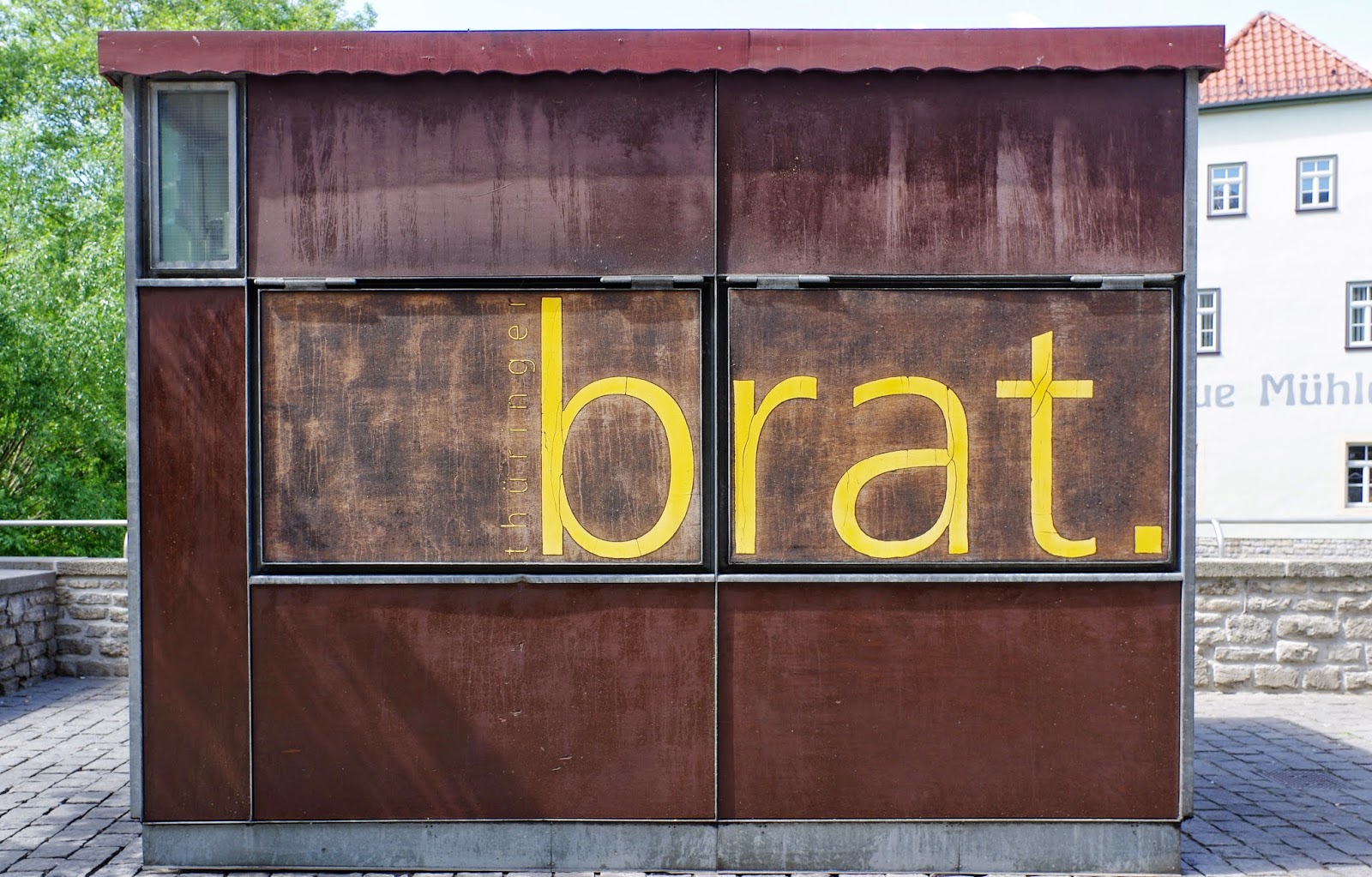 So why was everything closed?  Something was wrong.  I was reminded of The Prisoner where things were not quite right.  Bars were not open.  Coffee was unavailable.  Doors were firmly closed.  Streets were eerily quiet. 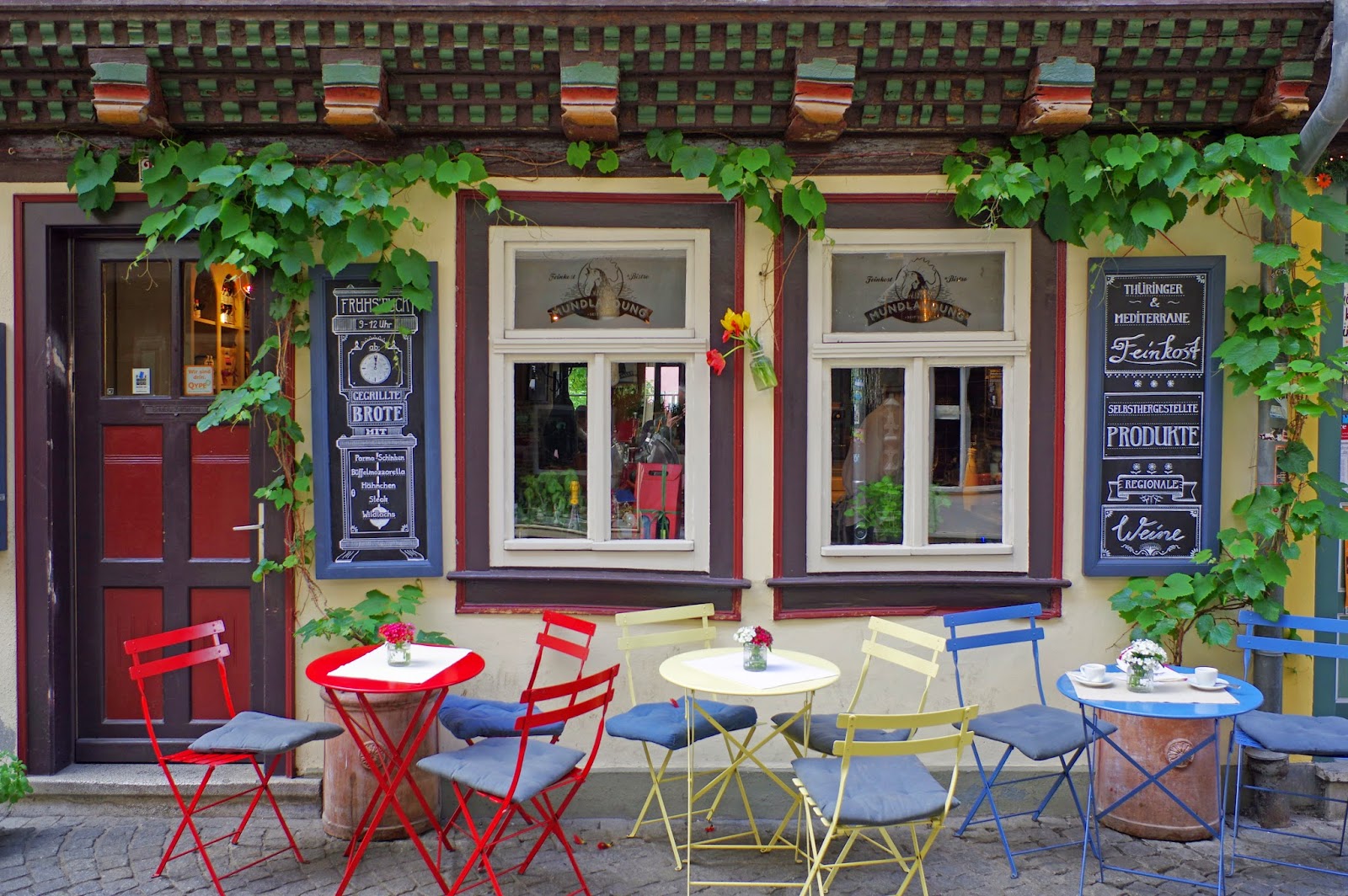 And yet, and yet, the train to Erfut was running.  And on time.  But why was it full of empty beer bottles?  At breakfast time?  And why were so many jolly people travelling, their bags clinking with glassware? 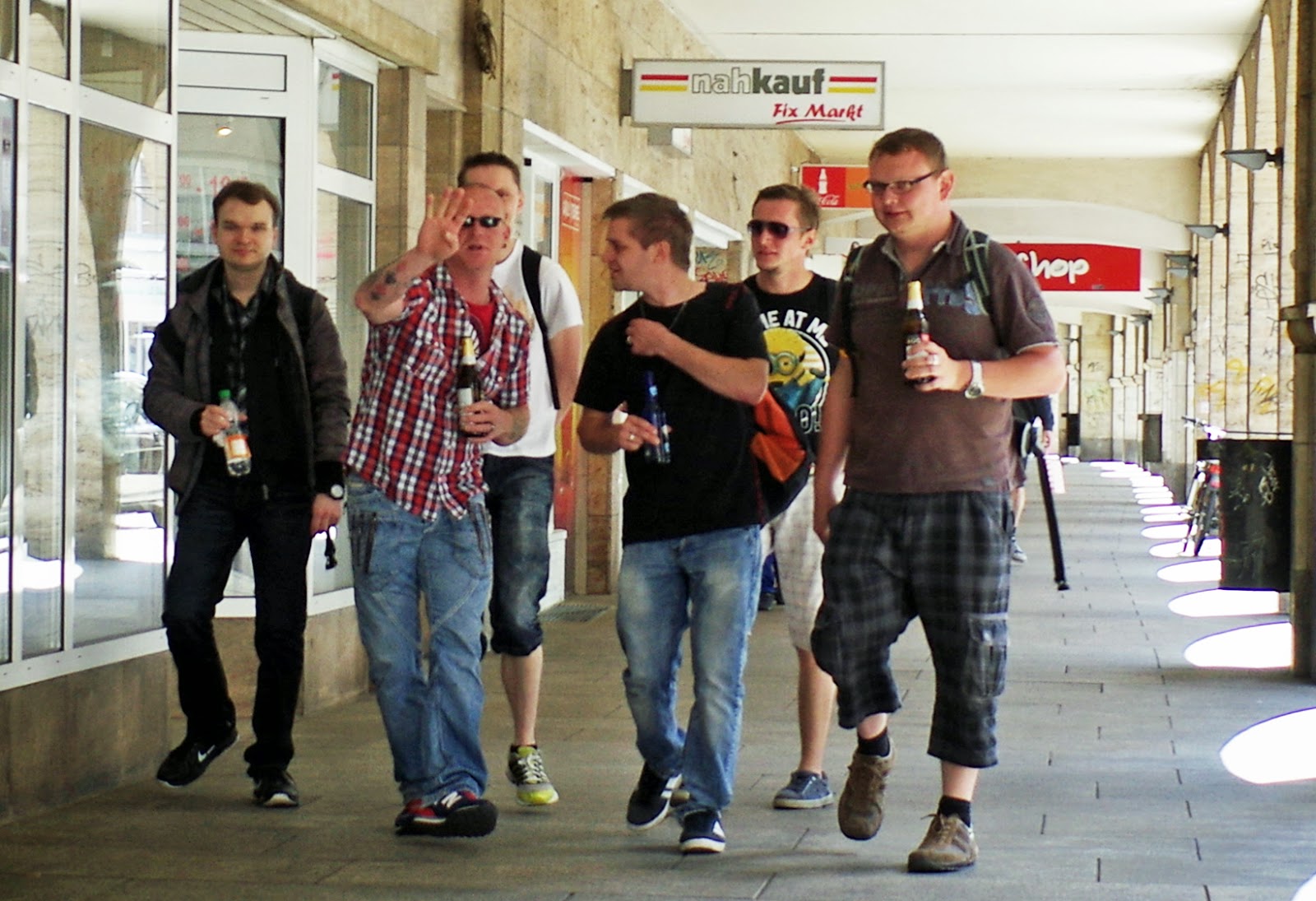 On the Krämerbrücke the pfennig finally drops as I notice a small poster advertising an open air event at a nearby Beach Club…..  Today is Himmelfahrt, which, remembering two little bits of German from the past (Gott im Himmel! and my school text book, Fahrt ins Blaue) I manage to translate as Heaven Journey!  Ach so!  Ascension!  In fact this is Christi Himmelfahrt – the day that Jesus ascended into Heaven – and it is a public holiday in the Federal Republic of Germany (and an Ecumenical Feast of Obligation in the Catholic Church).  In some countries it has been transposed to the following Sunday, and consequently perhaps is less prominent in the consciousness of the agnostic public. 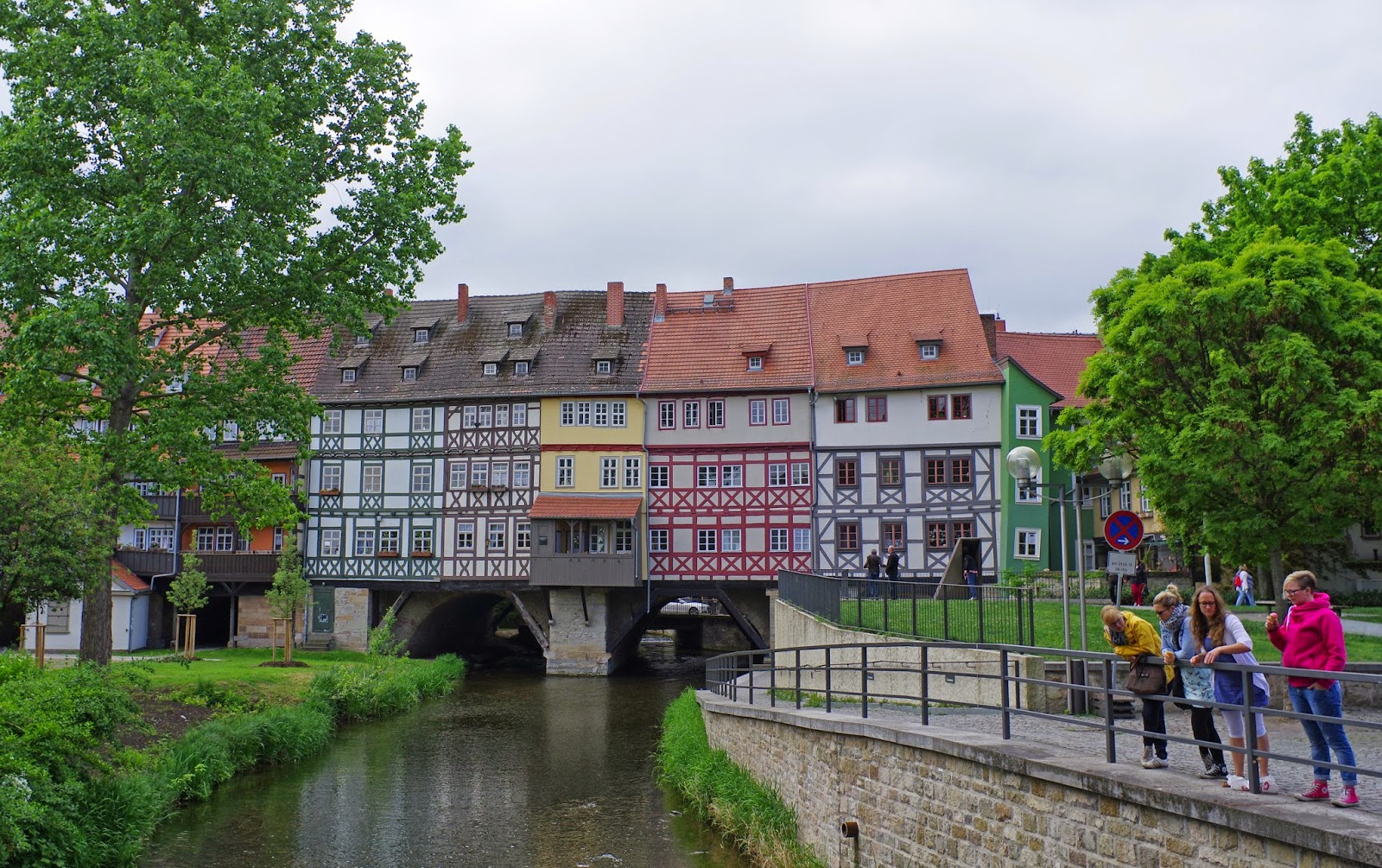 Anyway, this partly explains the host of cyclists in Velcro (or is it Lycra?) snapping pictures on the longest inhabited bridge in Europe, and the group of young men in Fischmarkt with a handcart filled with booze and a ghetto blaster, jigging about the statue of St George. What is not immediately apparent is that Ascension Day is also Father’s Day, or Men’s Day (Herrentag) in this part of , and when I look it up I find that Groups of male friends or male relatives spend a day together. They often take part in an outdoor activity, such as a walk in the country or a horse-and-cart ride. Afterwards, they have a communal meal.  What this omits is that it also seems customary here to consume prodigious amounts of alcohol at the same time. 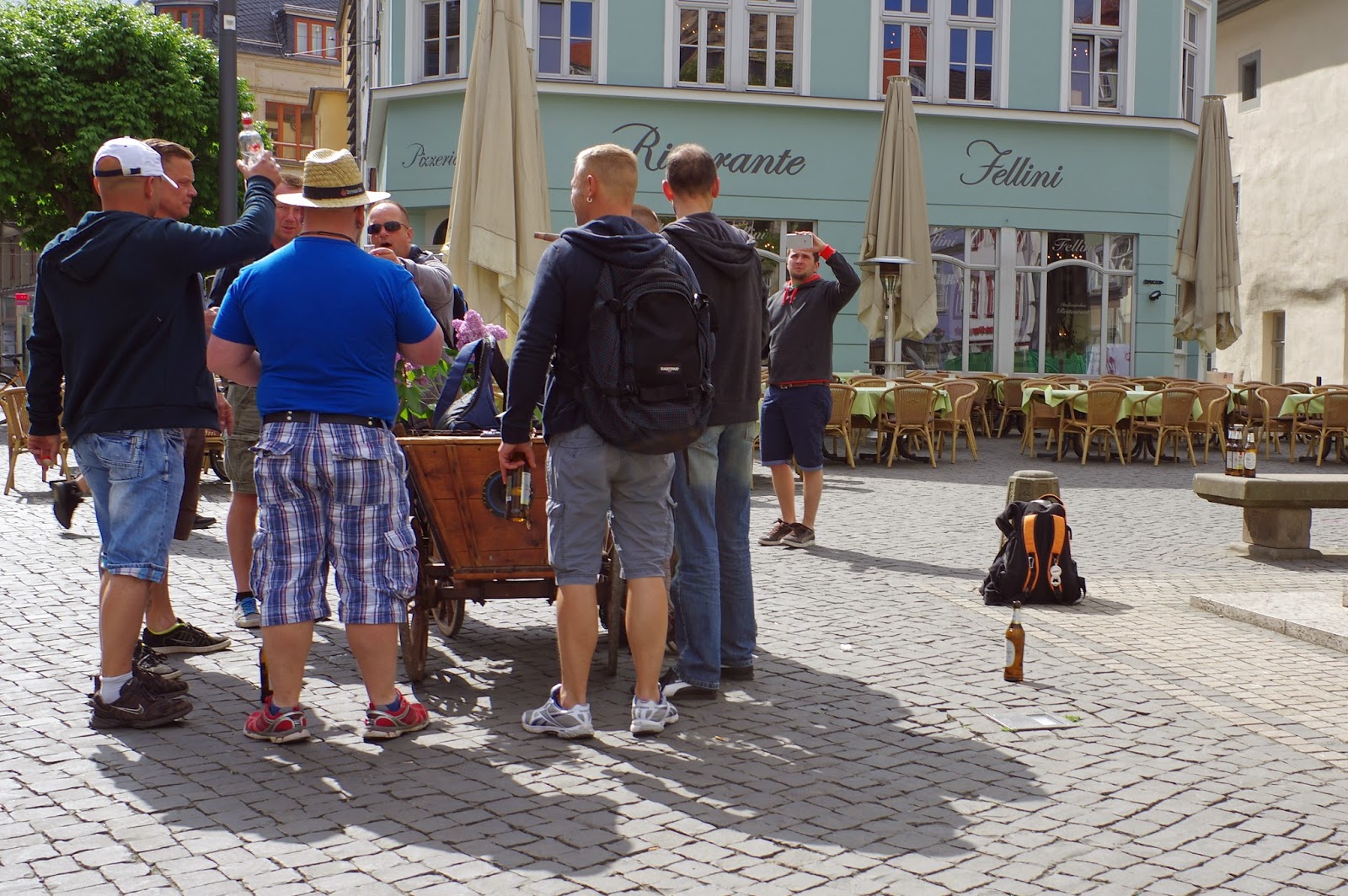 Another surprise is that, despite the years of state atheism in the DDR, and the efforts of Martin Luther (who studied at the University here from 1501 to 1505, then was for a time a monk in the Augustinian monastery before becoming a priest in the Cathedral) Erfut is crowned by two stunning gothic churches, which rise from the Domplatz up a mighty staircase and leap heavenward with towering spires. 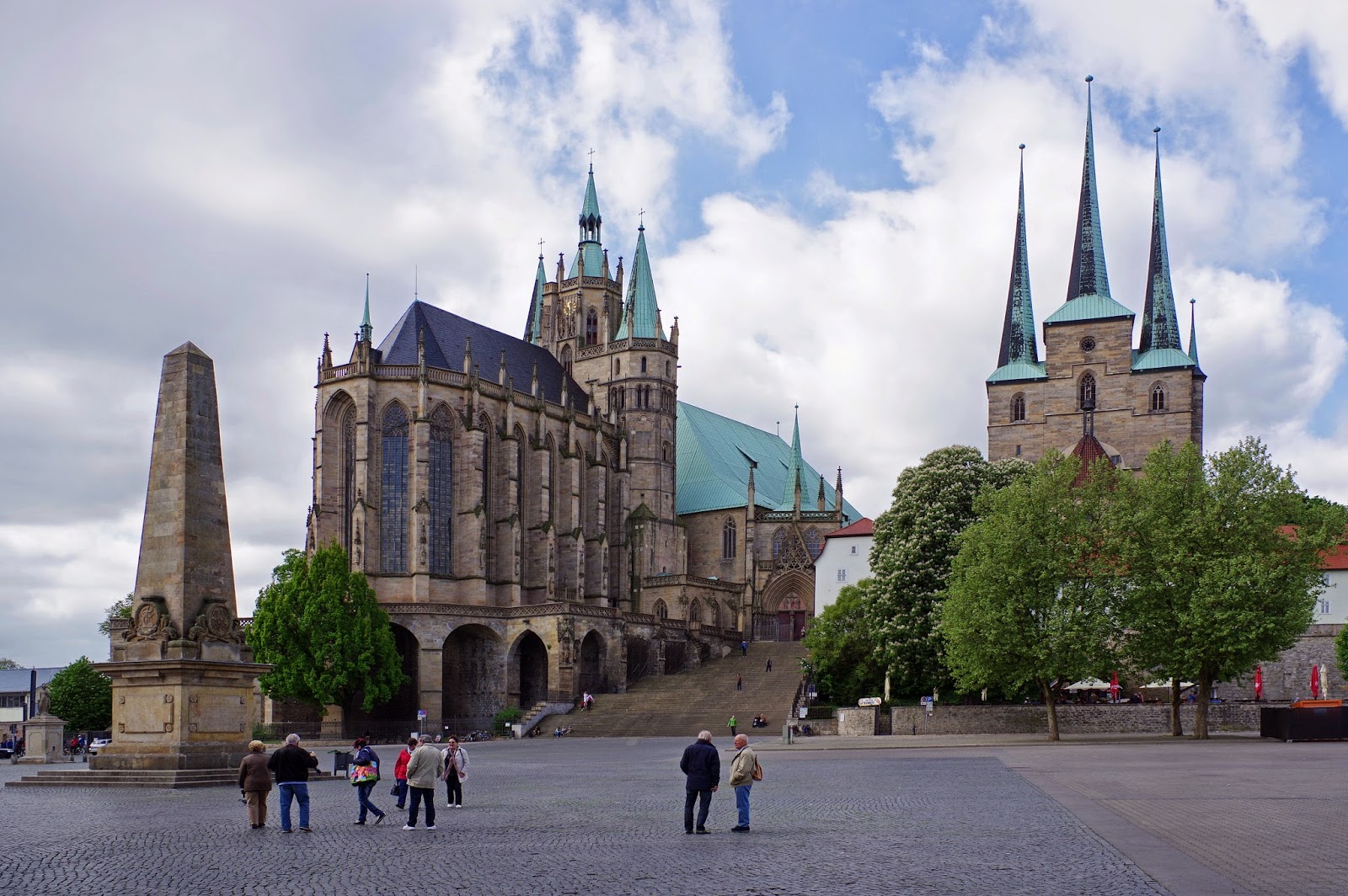 The larger of the two is the Cathedral of St Mary, the Catholic Cathedral, and it is full to bursting for mass, and we can only get in as the grand organ scatters a thrilling fugue out the doors with the departing faithful. 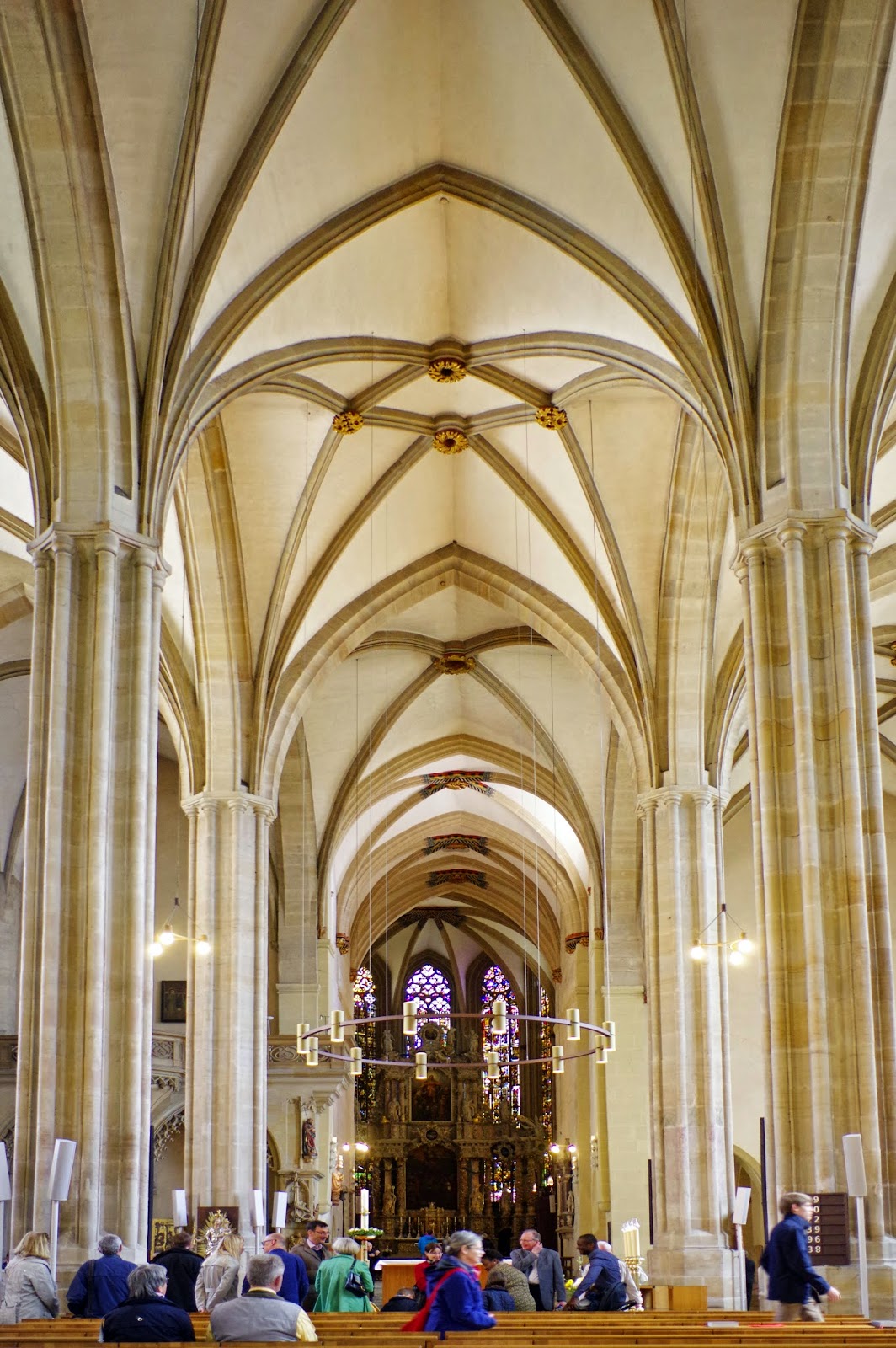 A little to the north of the vast Domplatz (one of the largest market squares in Germany) there is the great citadel of Petersberg, where a smart steel café allows for wide views across the town, 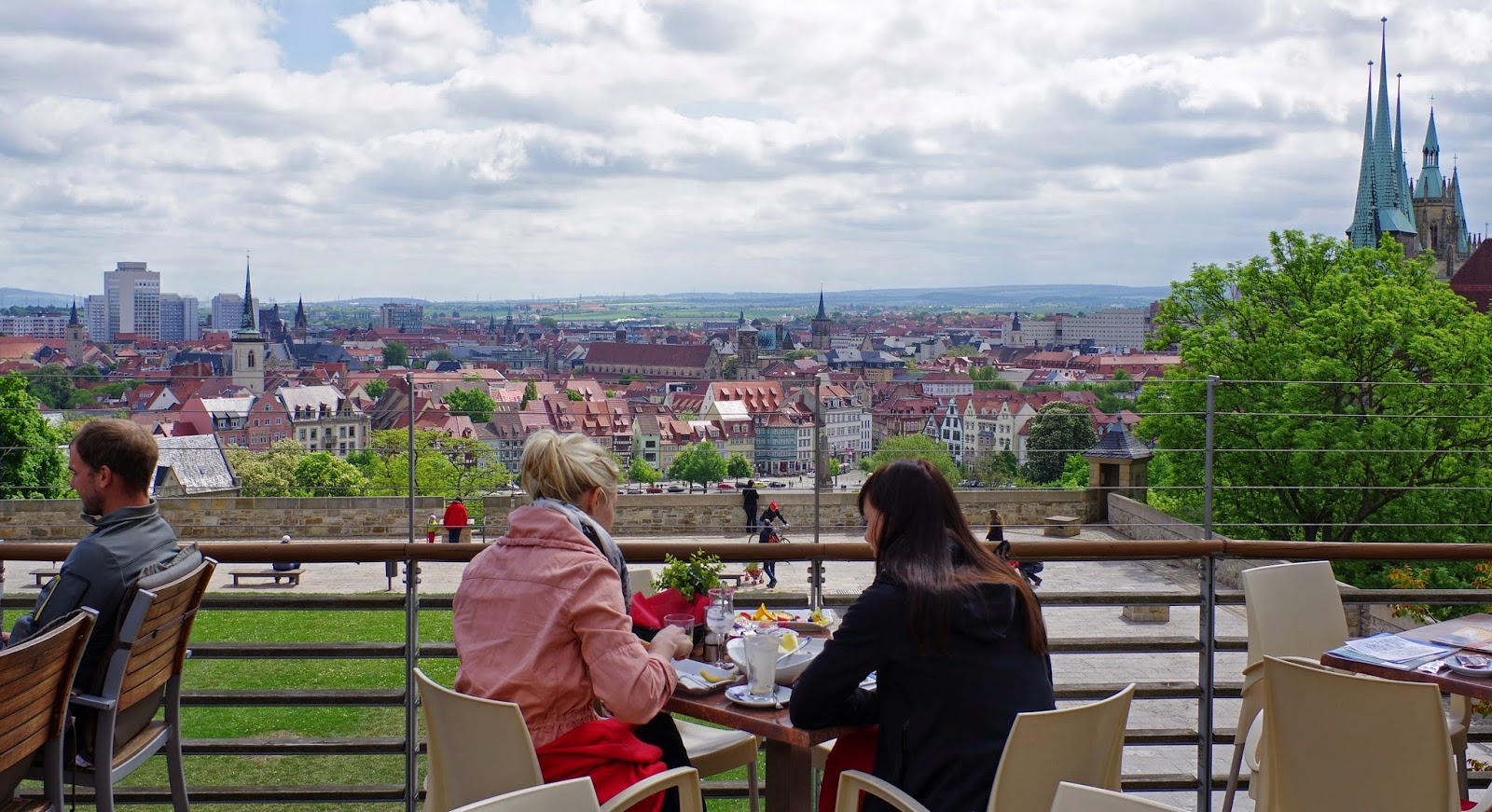 and the massive Peterskirche houses a display of concrete art, while the Defence Barracks next to it are boarded up as if to conceal their military past. Lovers have left scribbled notes in a sentry box, conspiring to turn military might into a trysting turret.

Erfut, the capital of , is buzzing.  The Domplatz conceals a vast car park, coaches line up under the citadel, trams clang and clatter round the streets and under the railway station, and a merry Biergarten has been set up beneath the Severikirche.  Giant Thuringian Bratwursts sizzle on a grill and frothing jugs of Köstritzer or Erdinger are raised to the sound of a group of musicians in top hats and tails whose repertoire includes not only lederhosen-slapping drinking songs but also the Wurzels’ greatest hits!

On the way back to the station we find the Predigerkirche, built by the Dominicans in the 13th century.  It is now the most important protestant church in Erfut, and its rather Spartan interior contrasts with the Cathedral’s catholic tastes, but it has a wonderful carved altarpiece. 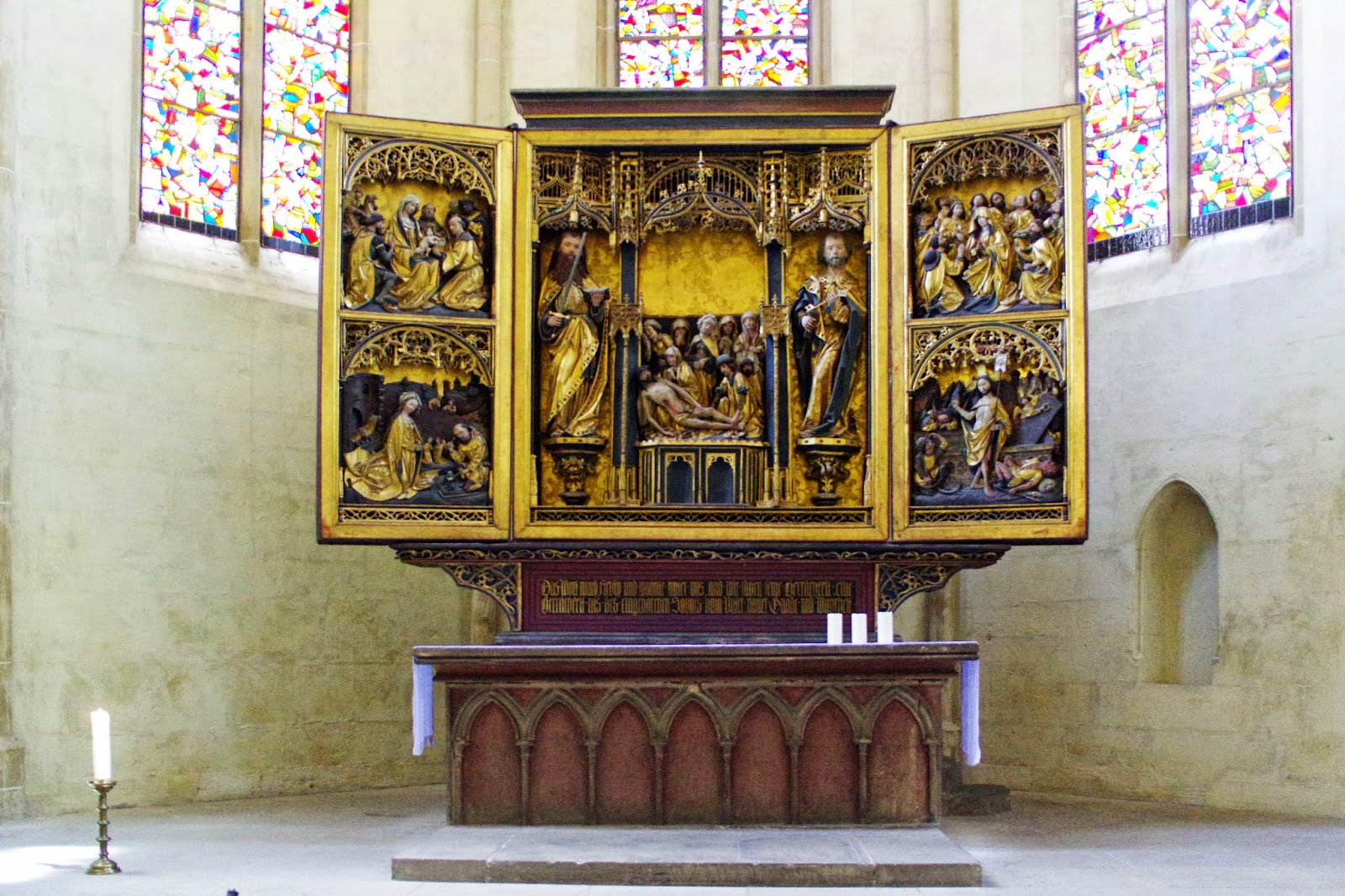 The organist here from 1678 to 1690 was Johann Pachelbel, who taught Johann Christoph Bach (Johann Sebastian Bach’s eldest brother) and lived in a house which belonged to Johann Christian Bach, not to be confused with Johannes Bach, who had been organist at the Predigerkirche from 1636 to 1673. 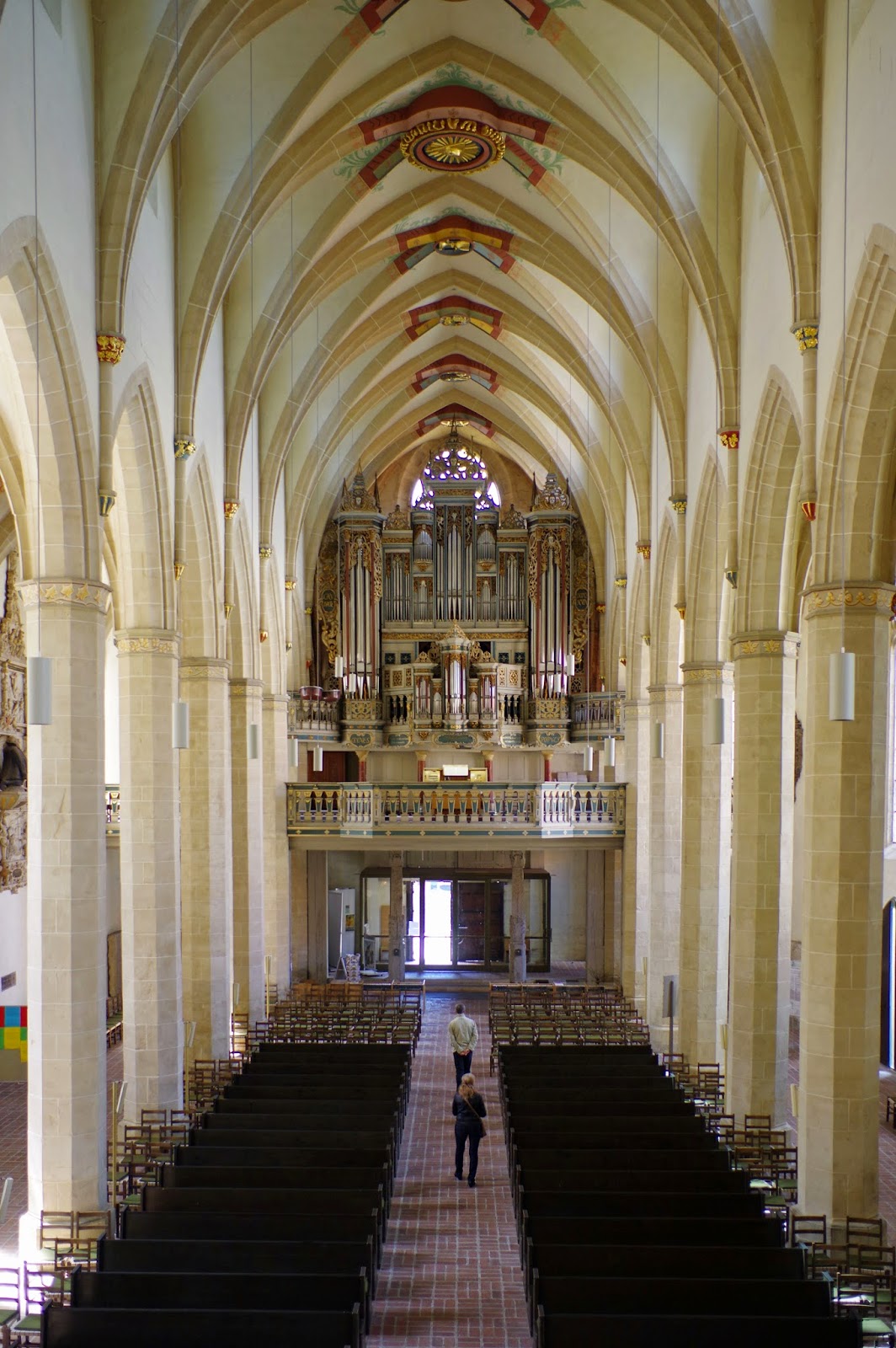 Another celebrity name associated with this church is that of Meister Eckhart, now revered by some as a great mystic.  He was Prior here at the end of the thirteenth century, though he was later tried for heresy by Pope John XXII and the Franciscan dominated inquisition. 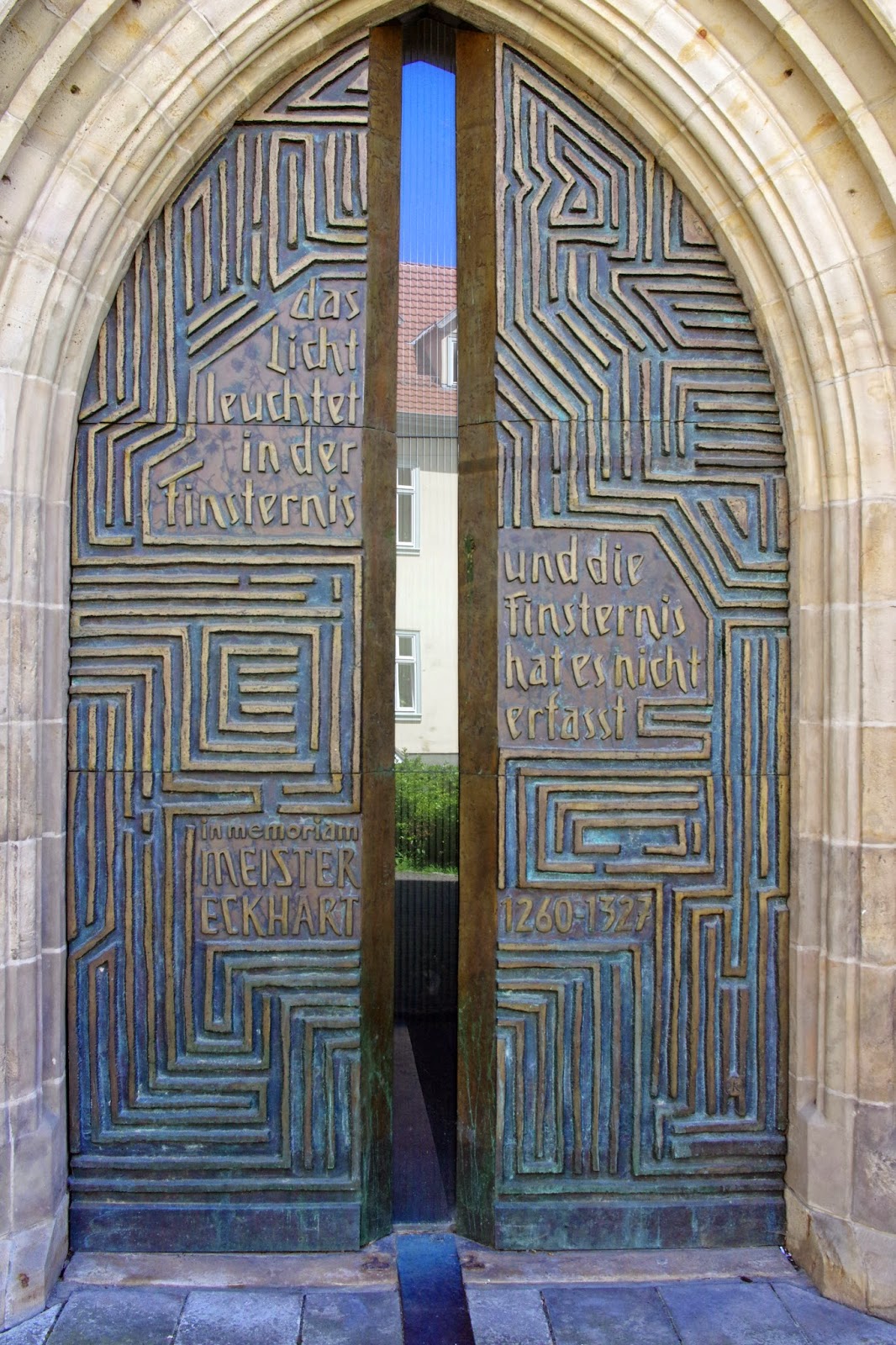 It is time to take the train back to , where the mood is very much holiday.  In the Park an der Lim clusters of young people lie about in the grass,

while in the Theaterplatz older citizens lick ice creams entertained by a senior busker. 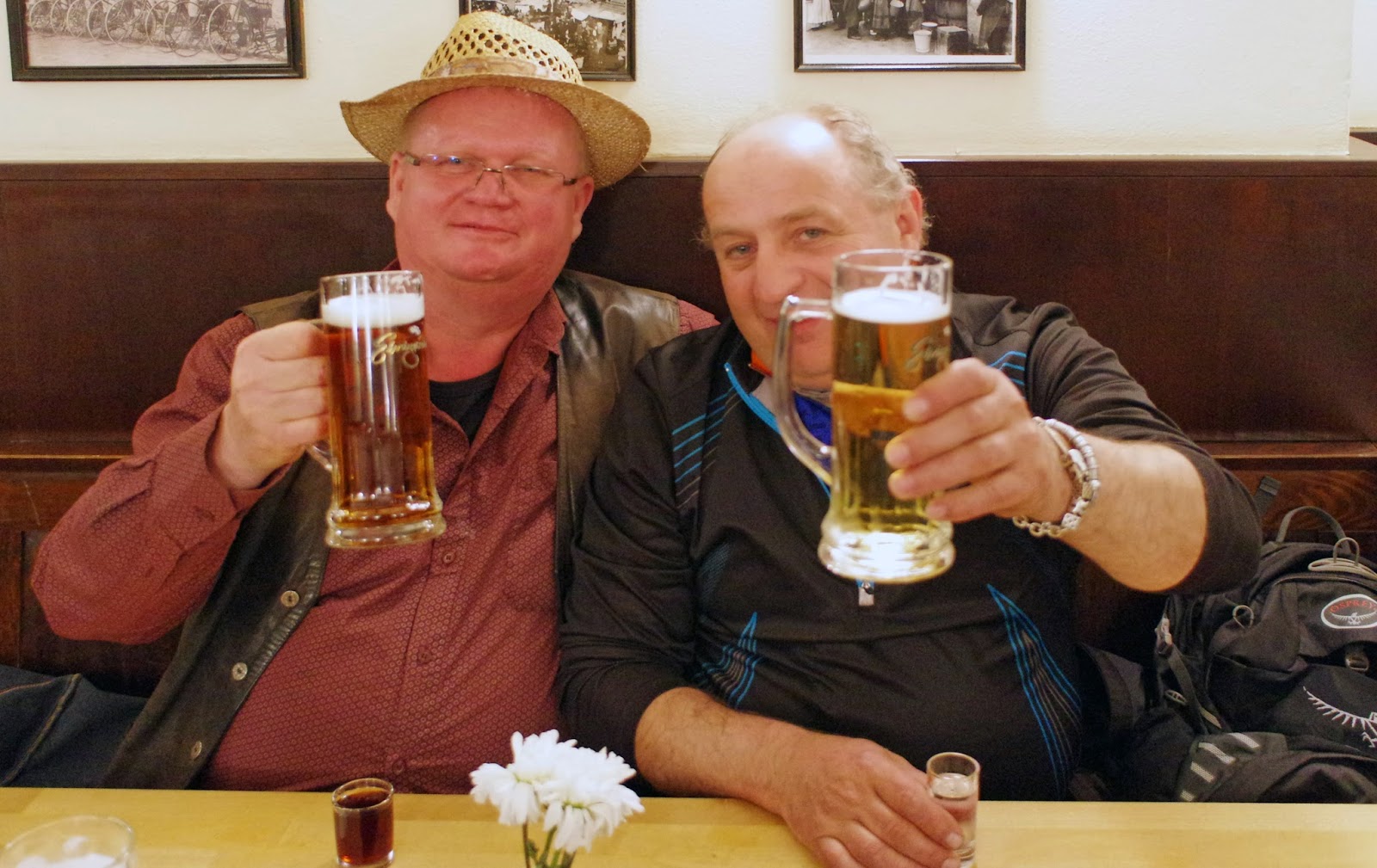 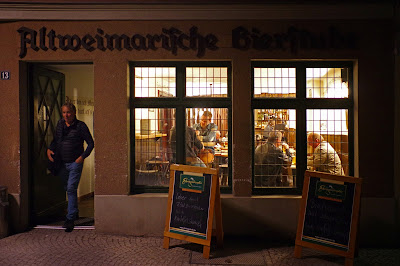