Scotland - Orkney - Islands in the Stream

The land that time forgot....

Leaving the Mackay country, in northern Sutherland, turning east from Strathy,  I make my way to Gills Bay, for the morning ferry to St Margaret's Hope.

The Pentland Firth is uncharacteristically calm, and the views, of WWII concrete structures and modern oil refinery, are clear in the misleading spring of Scapa Flow.

My first stop is seventy years ago, on Lamb Holm, where Italian prisoners of war, shipped there from their capture in North Africa to build the Churchill Barriers, constructed a chapel out of two Nissen huts. 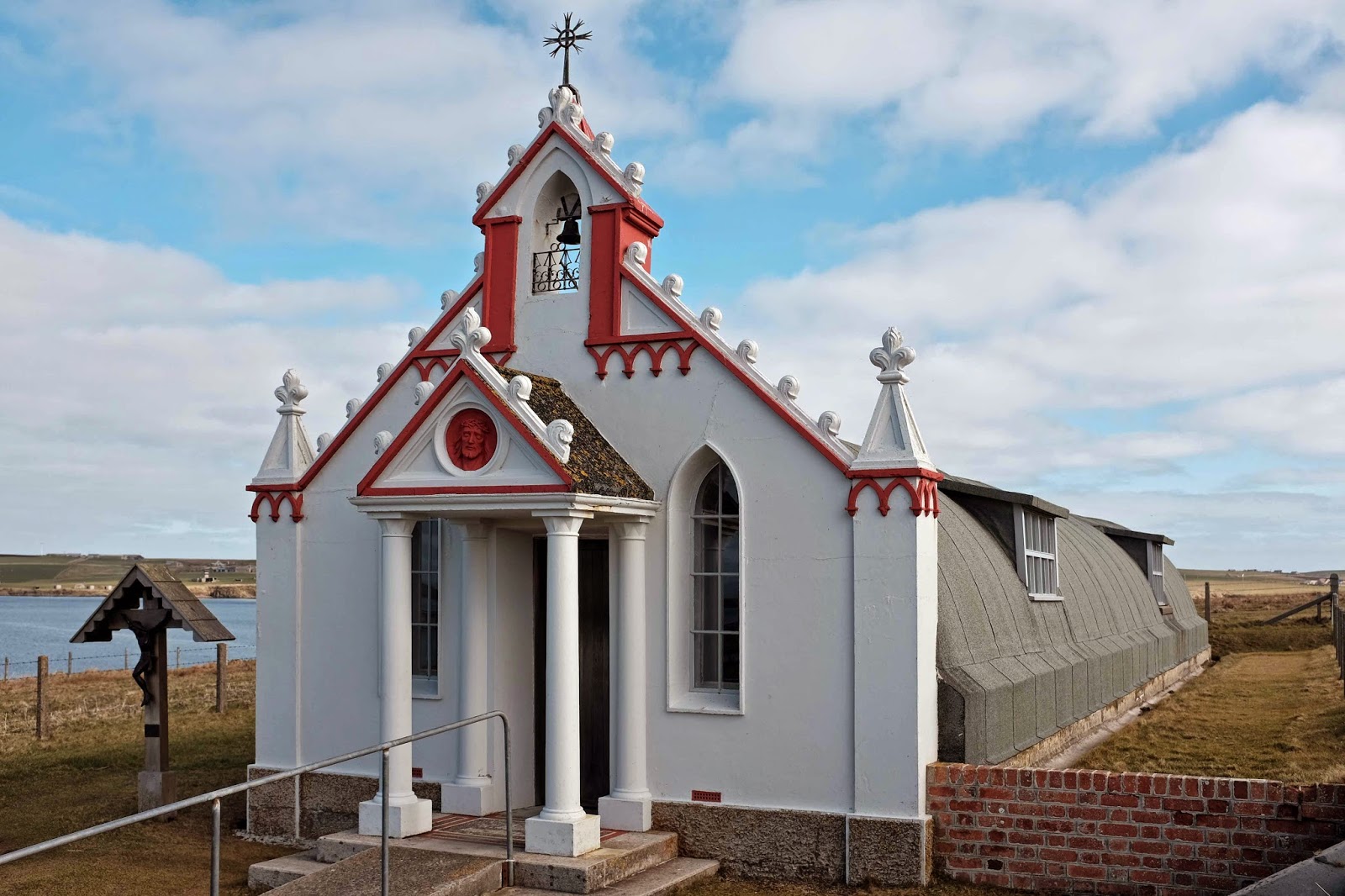 It is strange to find such a piece of Italy at 58.9 degrees north, but seeing this memorial to the triumph of human will over adversity is a fine experience. 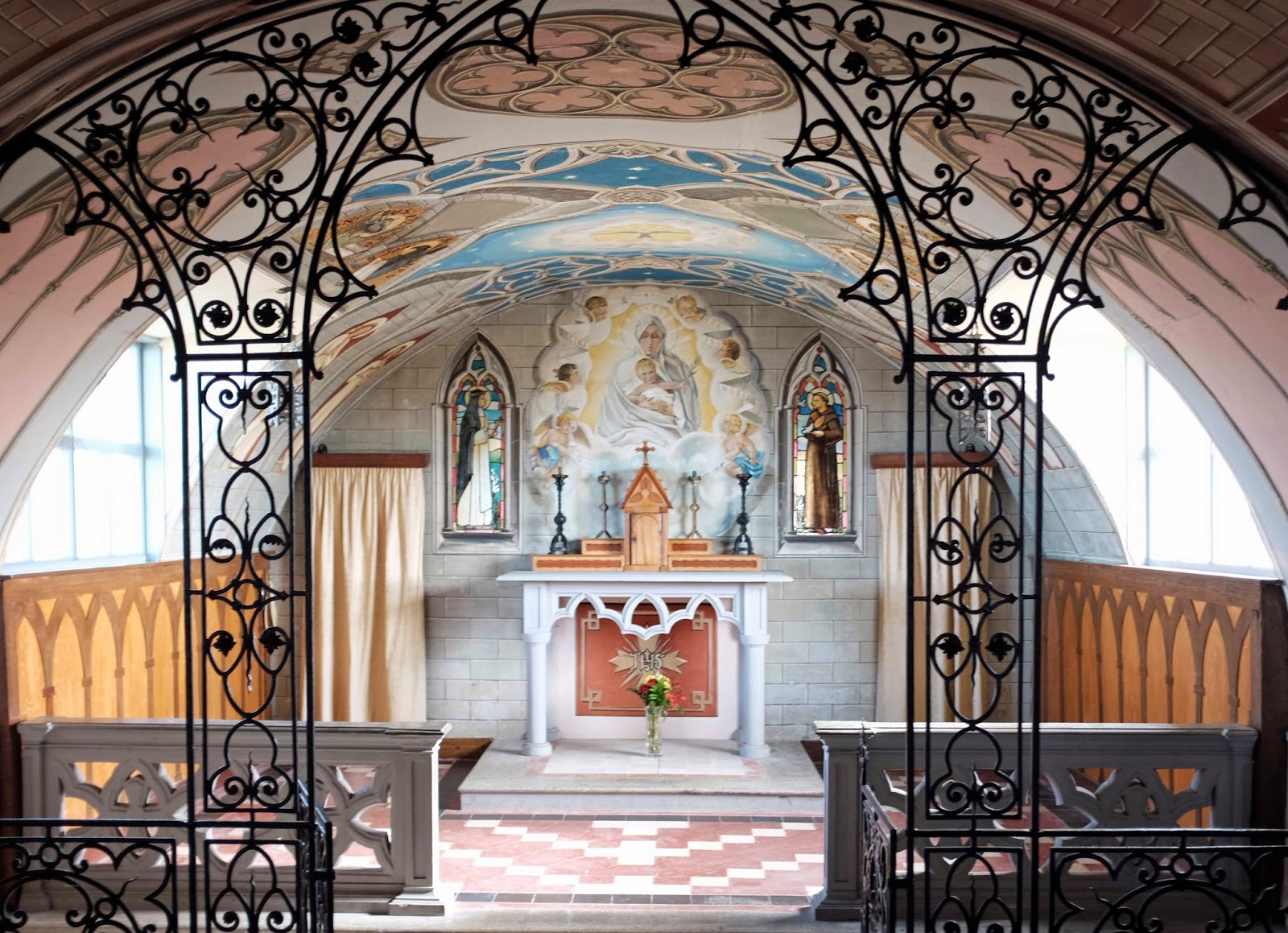 Apart from the five hundred Italians in the Lamb Holm camp 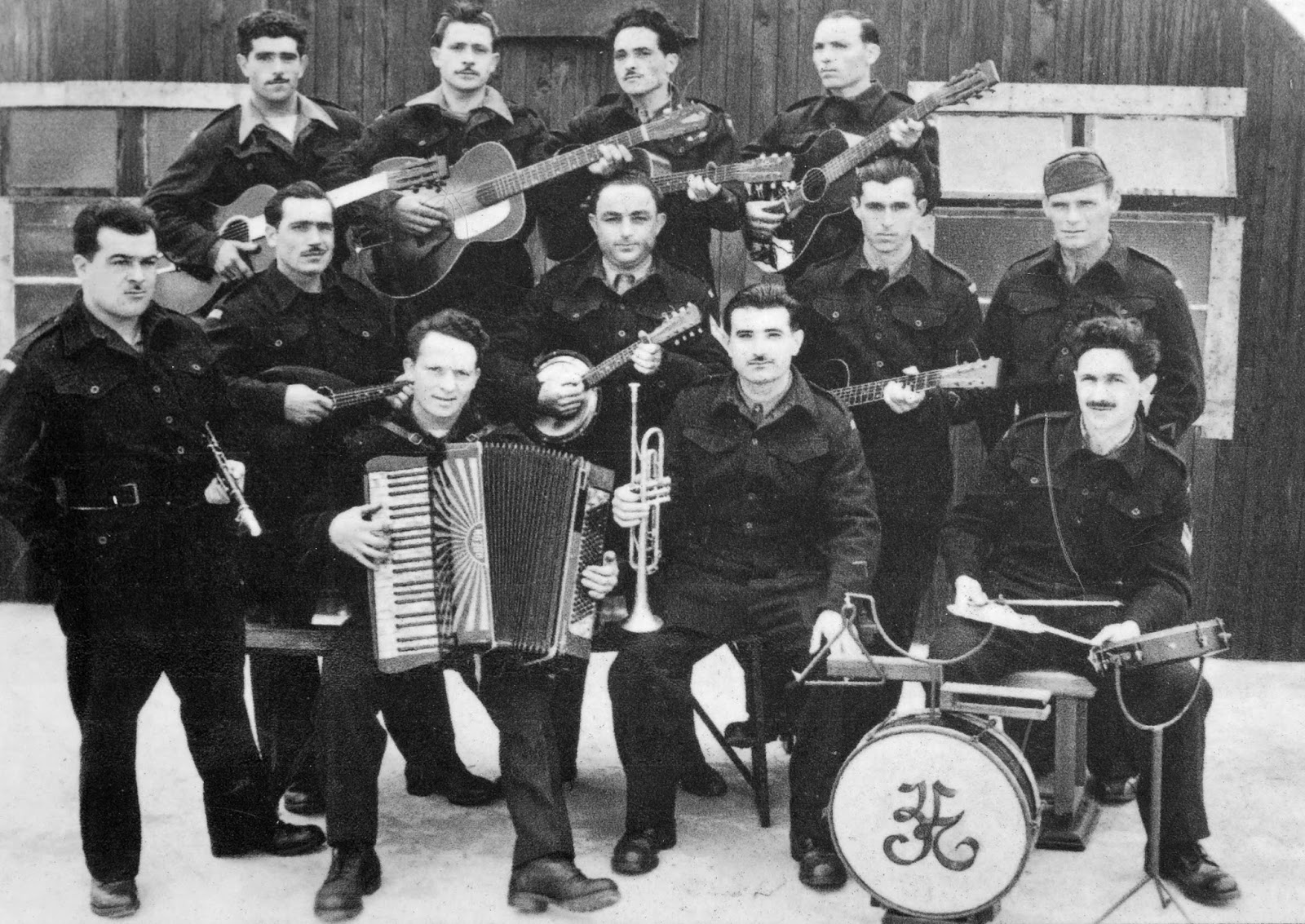 (and a further eight hundred elsewhere in the islands), there were some 60,000 British servicemen stationed in Orkney during the second world war, which puts the current population of 21,000 into perspective.

There are about seventy islands in the Orkney archipelago, of which twenty are inhabited.  There have been people here for at least 8,500 years, from Neolithic times, through the confederation of Picts and the ninth century conquest by Norsemen; through the years of herring fishing and Hudson Bay exploration to the histories of the two world wars, with the scuppering of the German fleet in Scapa Flow in 1918, and the sinking of HMS Royal Oak on October 14th 1939. 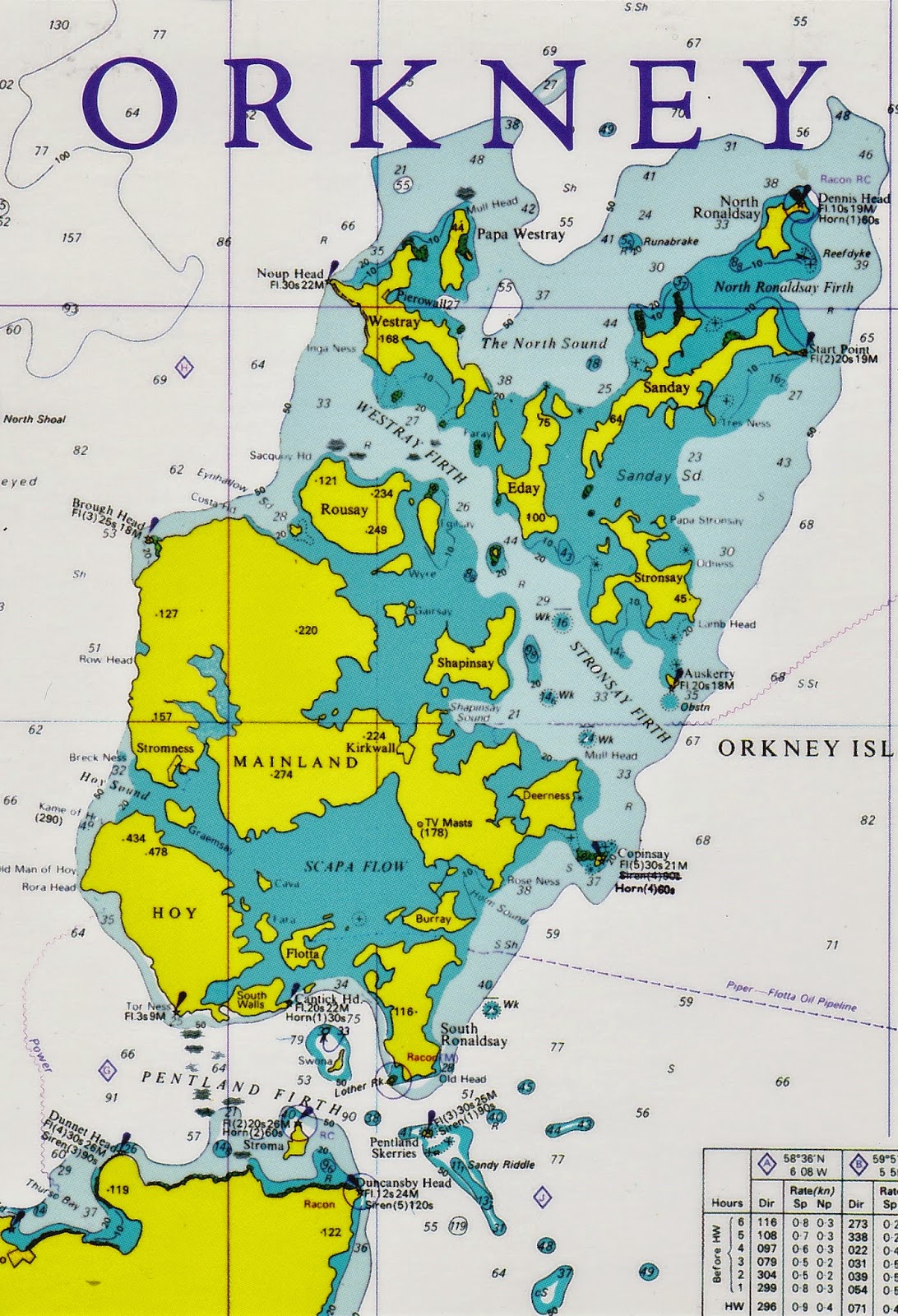 Throughout times forgotten the islands have been farmed productively, and, though the landscape may appear bare, the soil is fertile and cattle and sheep are grazed extensively, with cereal cropping and fishing supporting the natural economy. 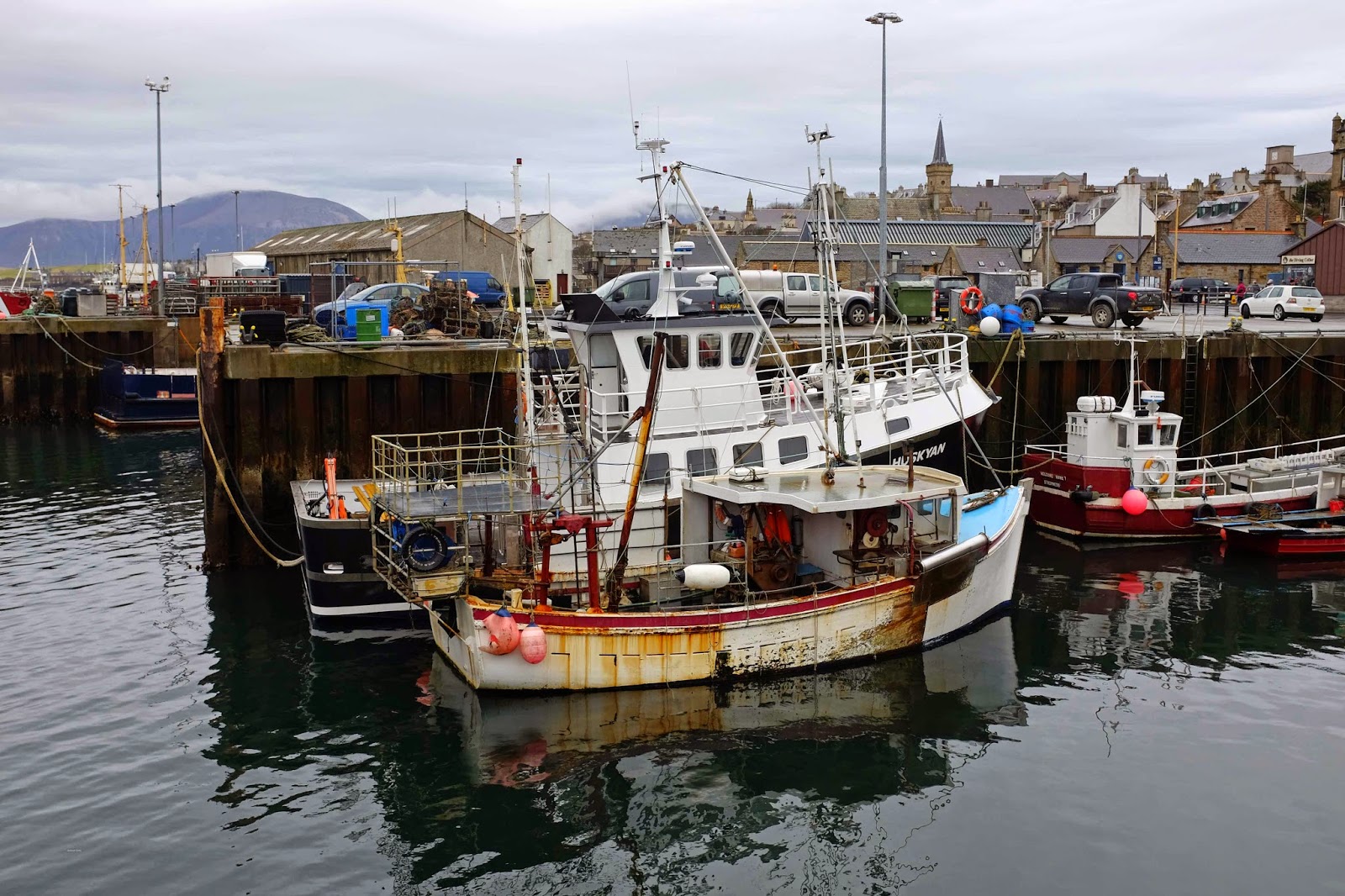 In the 1970s plans were drawn up to mine uranium ore between Stromness and Yesnaby on the mainland (as the largest island is known).  There was public outcry and in 1979 the plan was shelved. Influential in the 'no' campaign was local author George Mackay Brown, whose novel Greenvoe, 1971, prophetically told of the destruction of traditional life as a result of exploitation by both the oil industry and uranium mining.

His friend, Peter Maxwell Davies, who has been resident in Orkney since 1970 (first on Hoy and subsequently on Sanday), composed both Black Pentecost (using text from Greenvoe) and The Yellow Cake Revue (yellow cake being a colloquial term for uranium ore) as contributions to the campaign. 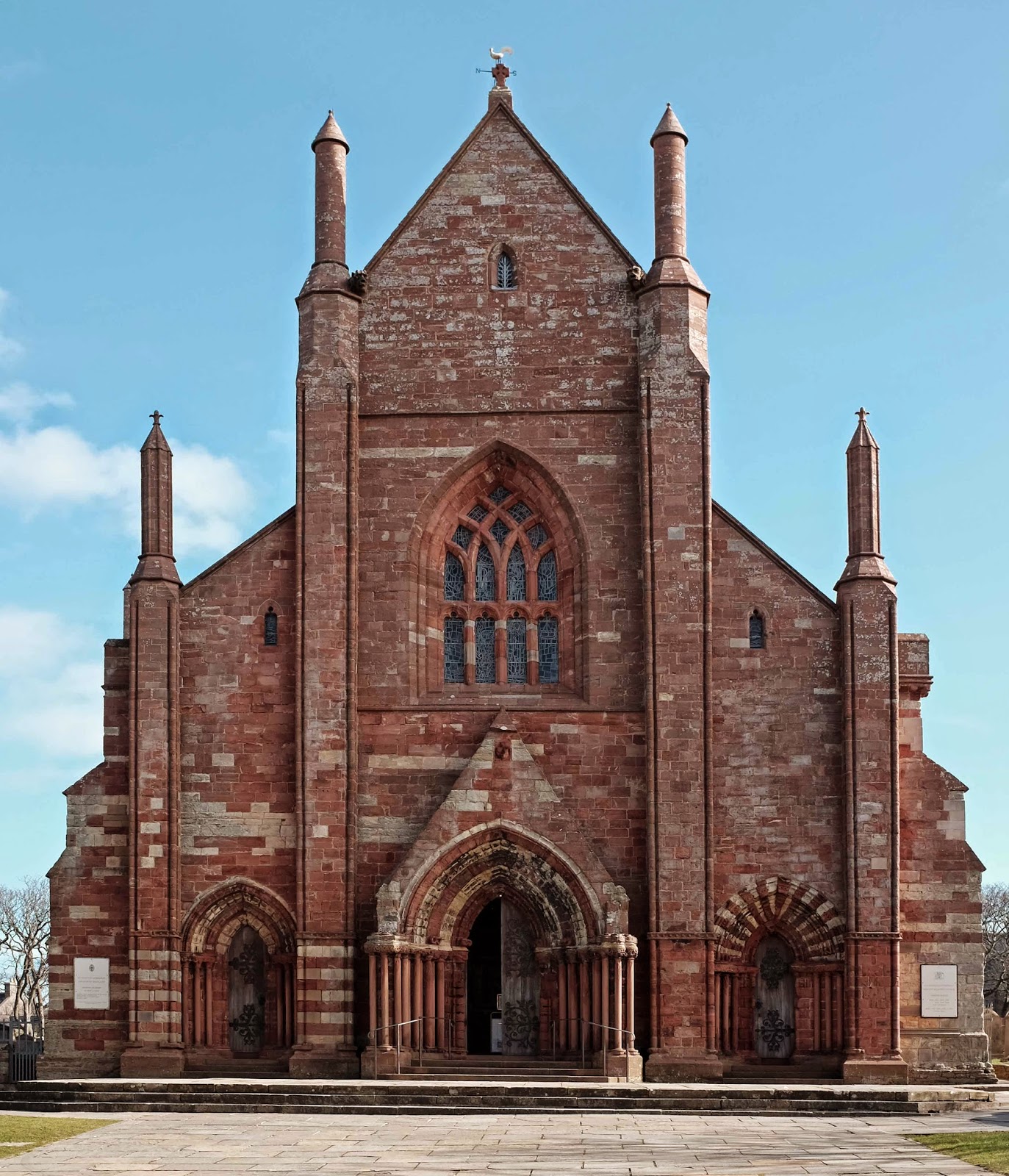 My time in Orkney is brief, but I am treated to both glorious clear spring weather, and rain of the most ugsome kind.  I visit the great sandstone cathedral of Kirkwall, dedicated to St Magnus, founded in 1137;  the neolithic village of Skara Brae; 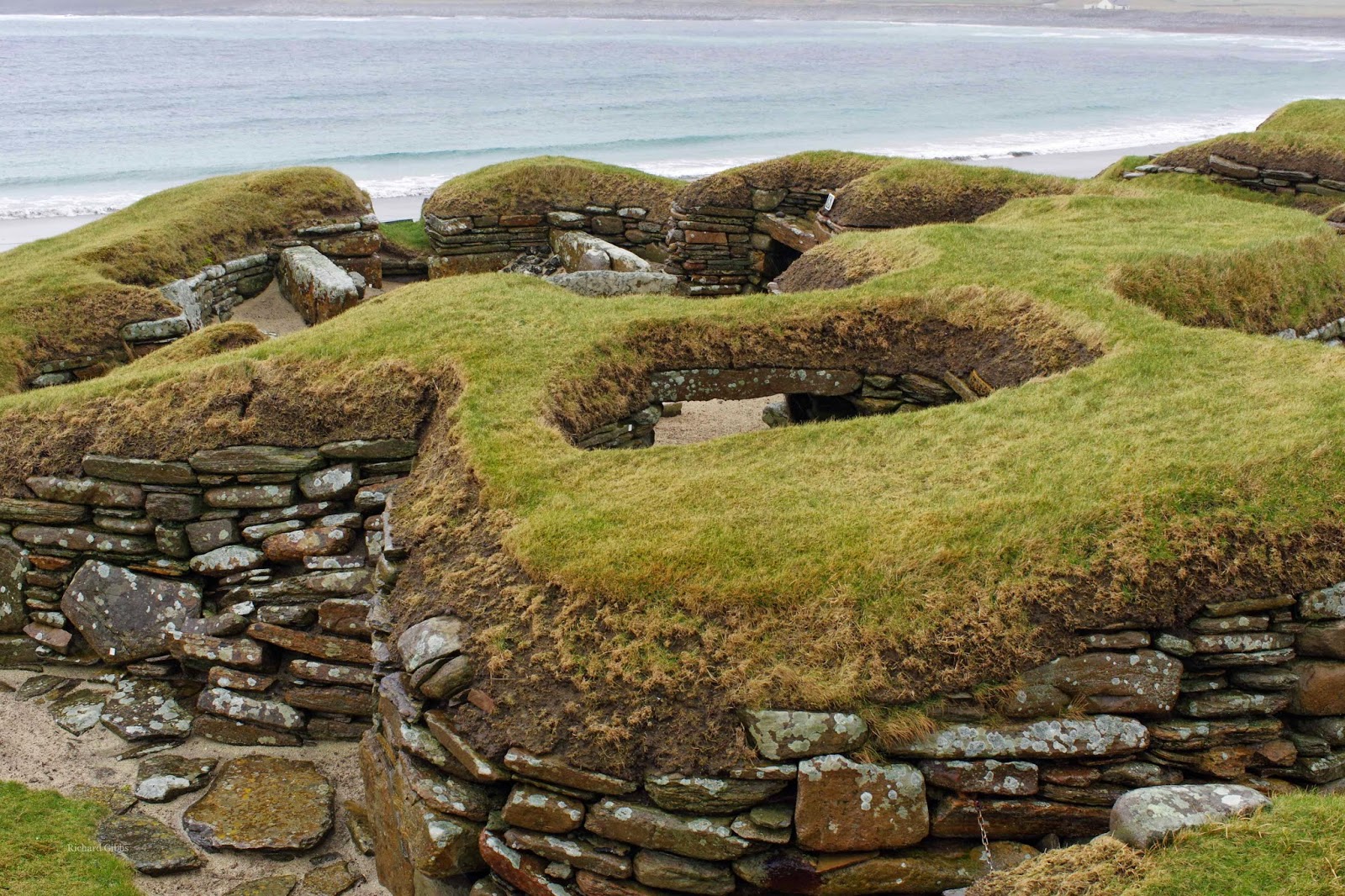 the 104 metre diameter stone circle of the Ring of Brodgar (60 megaliths, of which 27 are still standing after five thousand years); 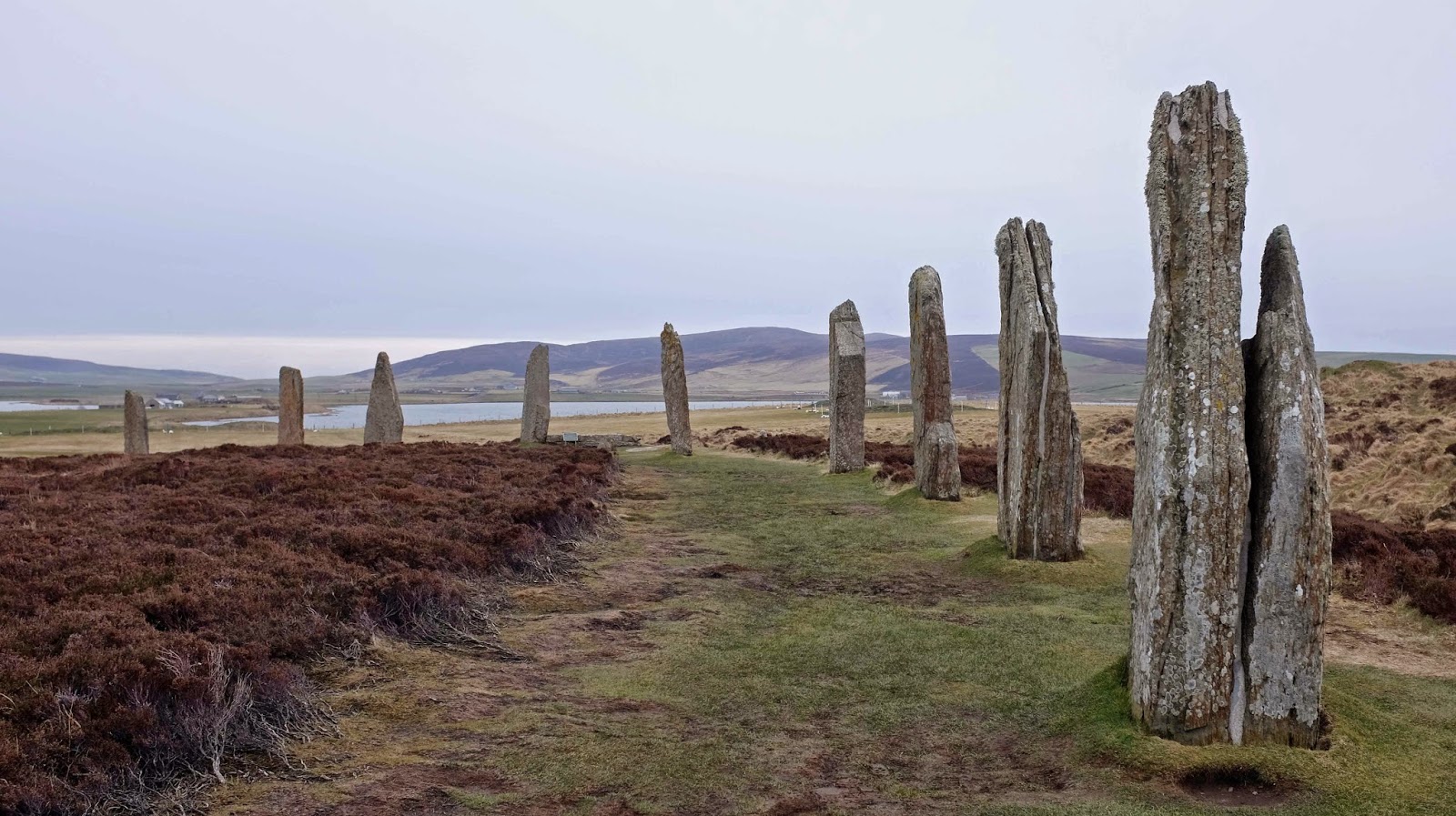 the Broch of Gurness, an imposing castle of stone that was probably built two thousand years ago and was inhabited until the Viking invasion. 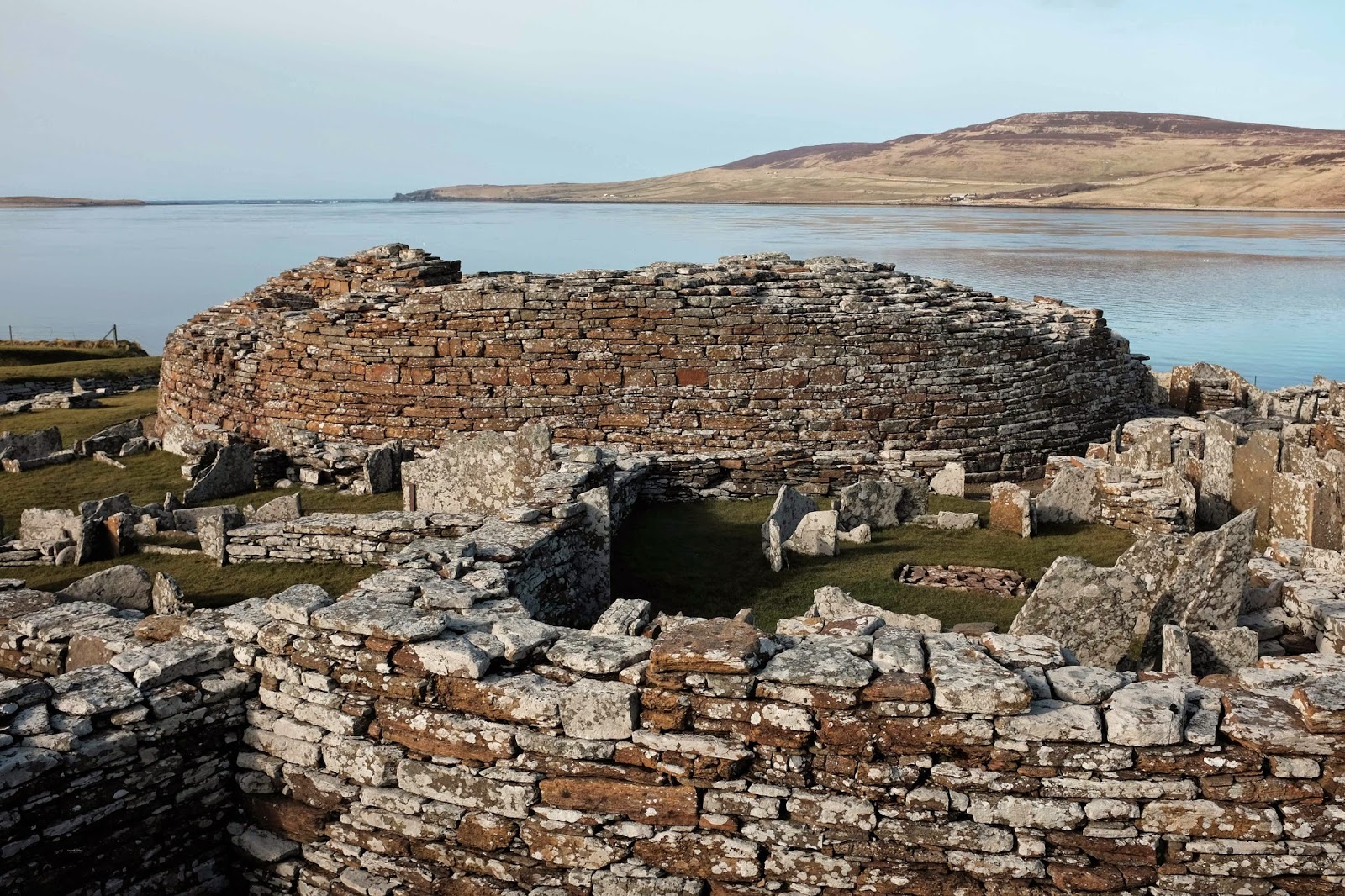 I also explore ruined palaces of Bishops and Earls that would have rivalled great medieval houses across Europe, and I dabble at the sea's edge on the quiet sands of Evie, and am beaten back by violent seas at the tidal crossing to Birsay island.

The Orkney Museum in Kirkwall holds a store of information about life here, and I take away with me a disc of music inspired by Archaeology and History  (Out of the Stones, devised by Bob Pegg and Bill Taylor) 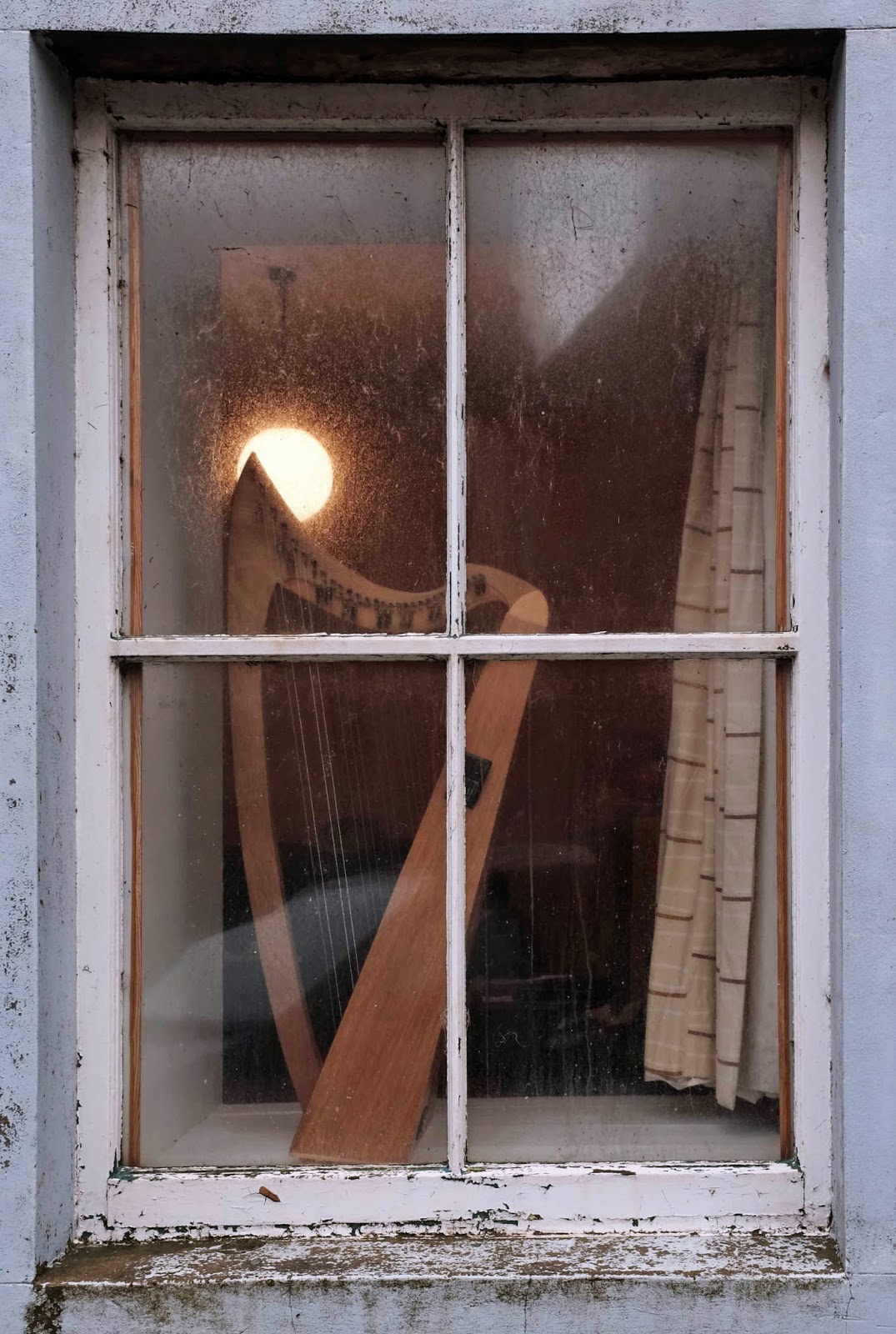 and For the Islands I Sing, an autobiography by George Mackay Brown, (whose mother was from Strathy, in the Mackay country where I started this journey). 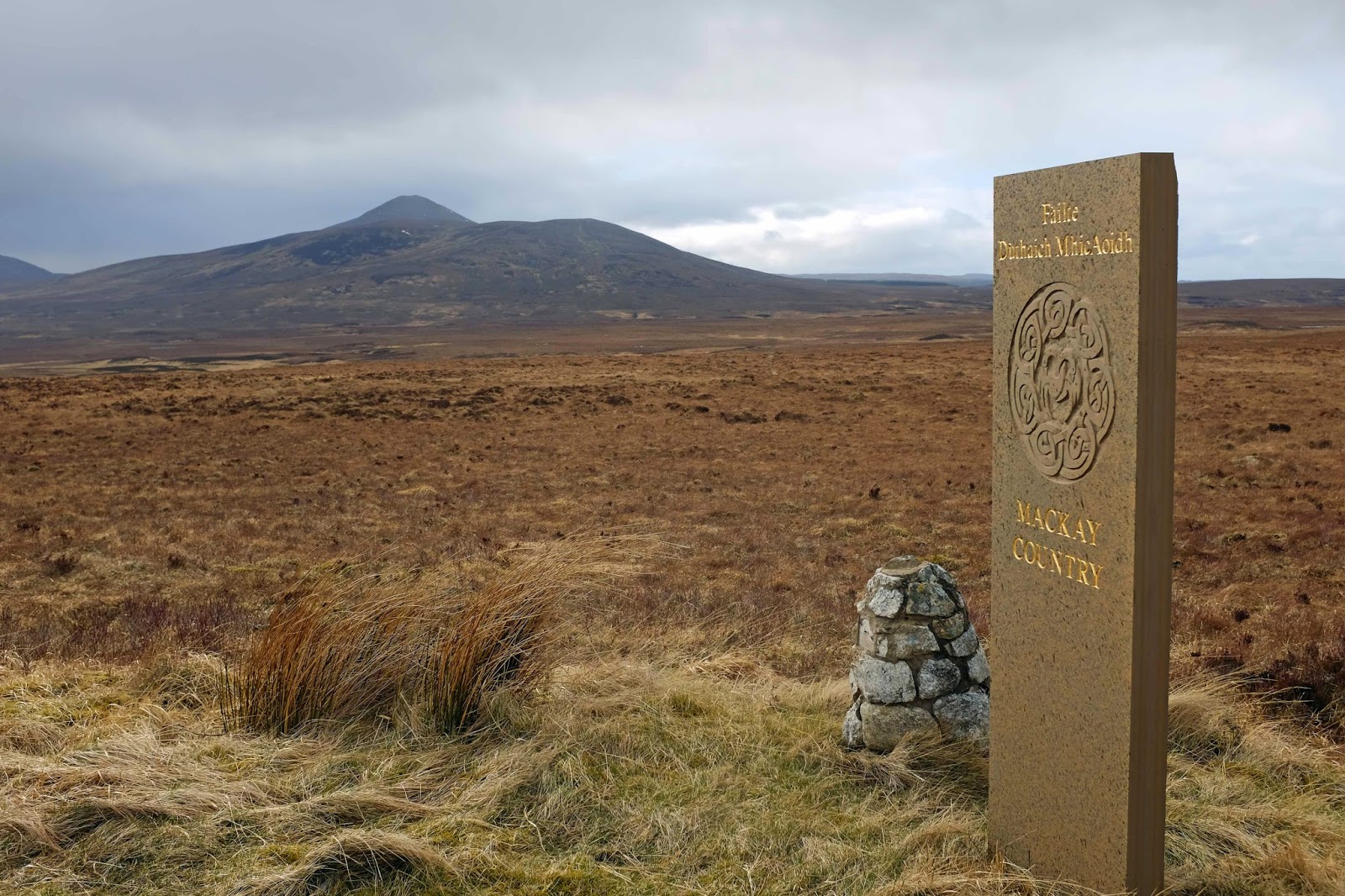 As the weather changes, and rain drives in, I take shelter in the Smithfield Hotel in Dounby, where the waiter tells me the best thing on the menu is yellow curry, and a hen party strives to enjoy strong liquor while the bus from Stromness patiently sits across the street. 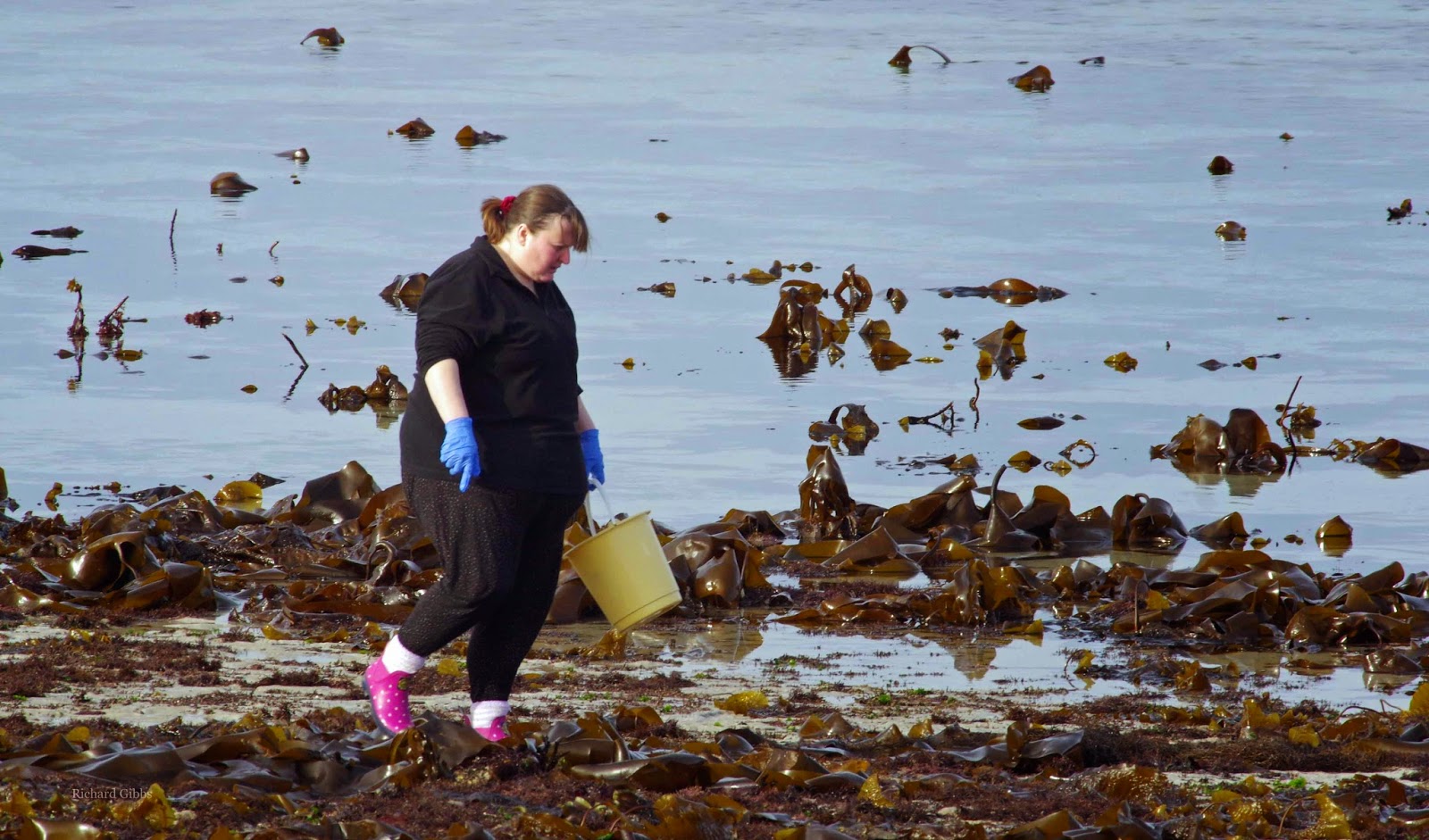 At the Orkney brewery, housed in the former schoolhouse in Quoyloo, I sample bere bannocks with smoked salmon and local cheese, and drink Dark Island and Northern Light (I draw the line at Skull Splitter).  Then it is time to wander the harbour side and quiet streets of Stromness to stalk the ghost of George Mackay Brown. 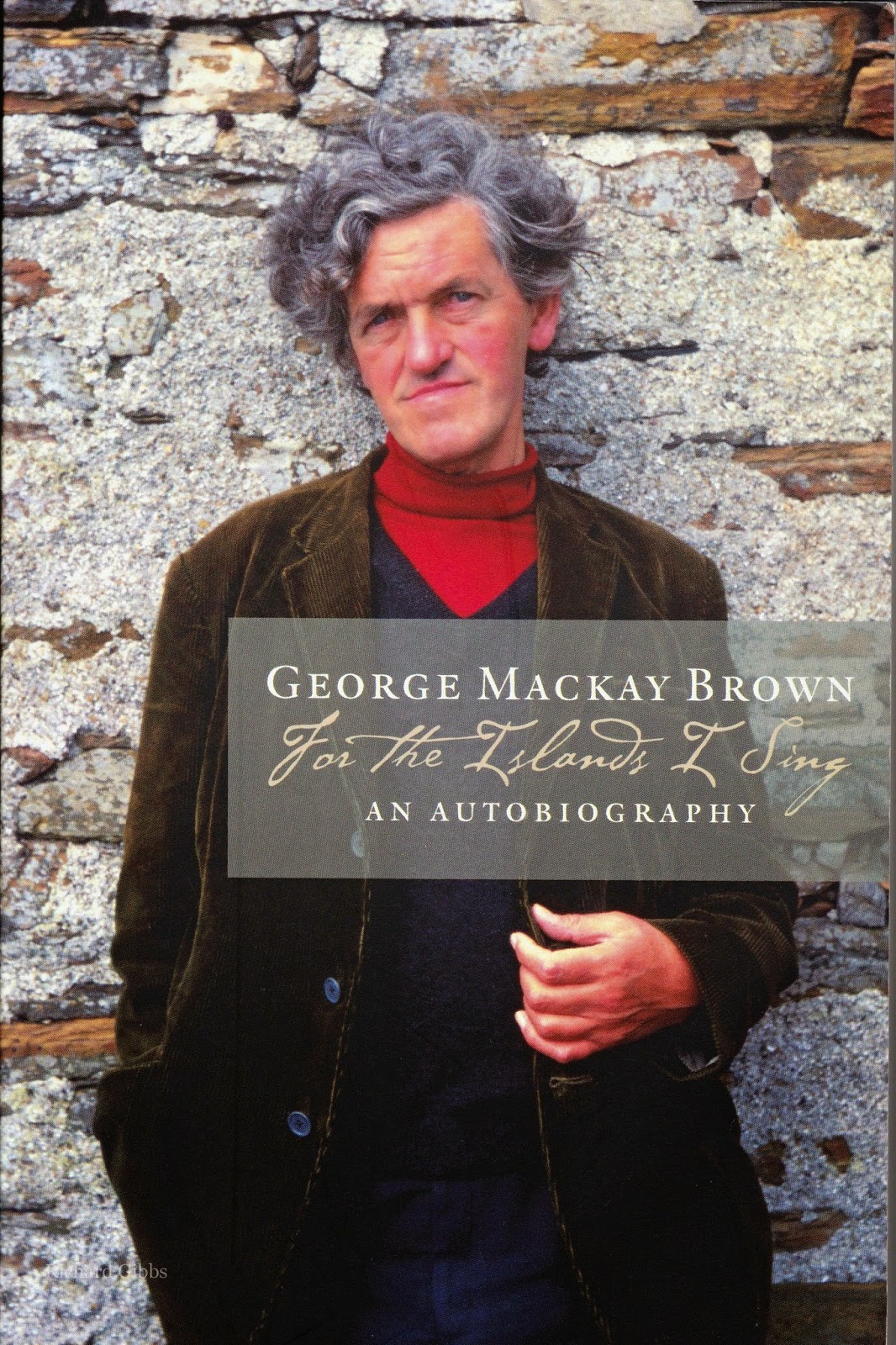 George Mackay Brown was born in Stromness, in 1921, and, apart from studies at Newbattle Abbey (taught by Edwin Muir) and the University of Edinburgh (where he mixed in Rose Street bars with the likes of Hugh MacDiarmid, Norman MacCaig and Sydney Goodsir Smith), he spent his whole life here. 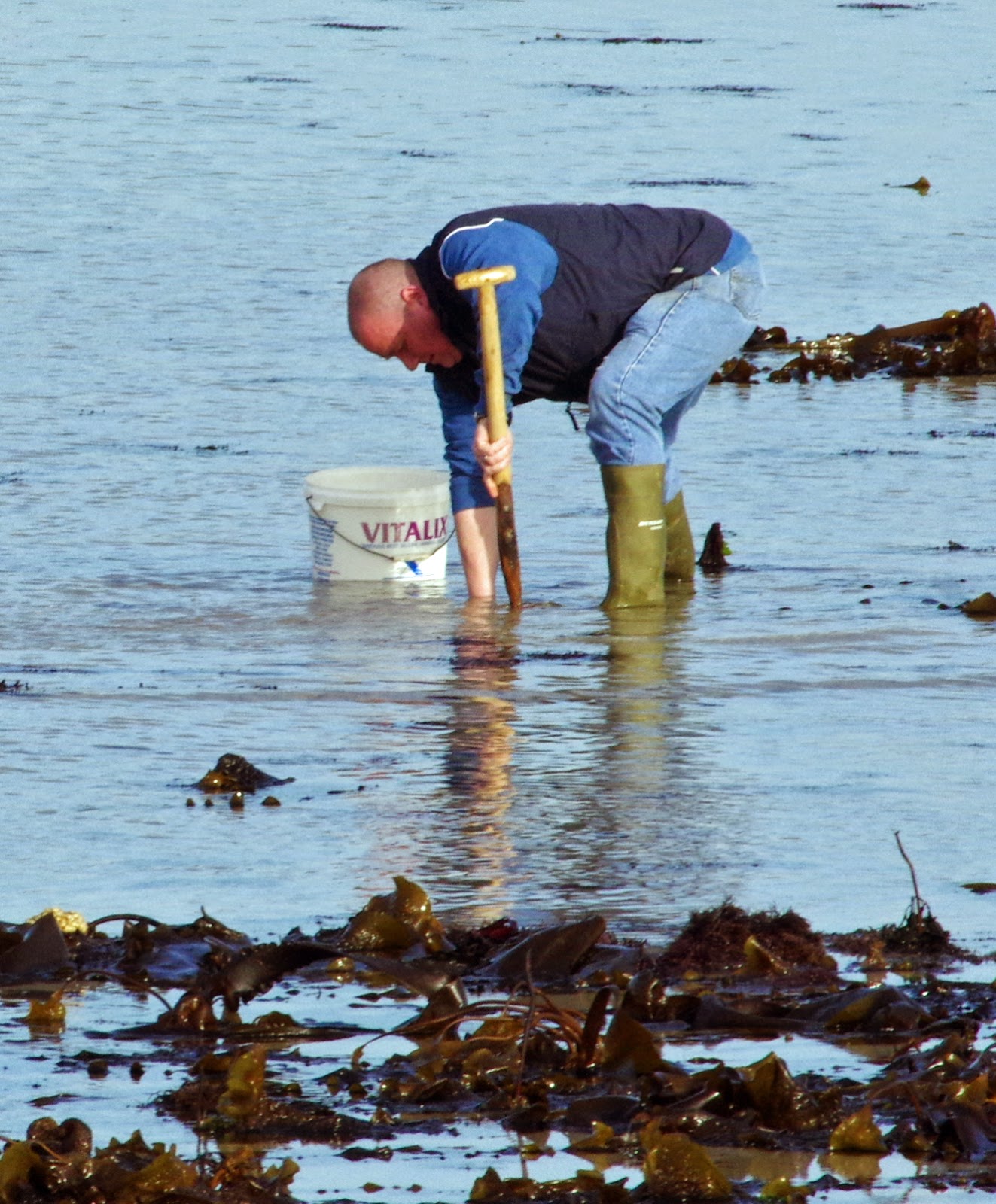 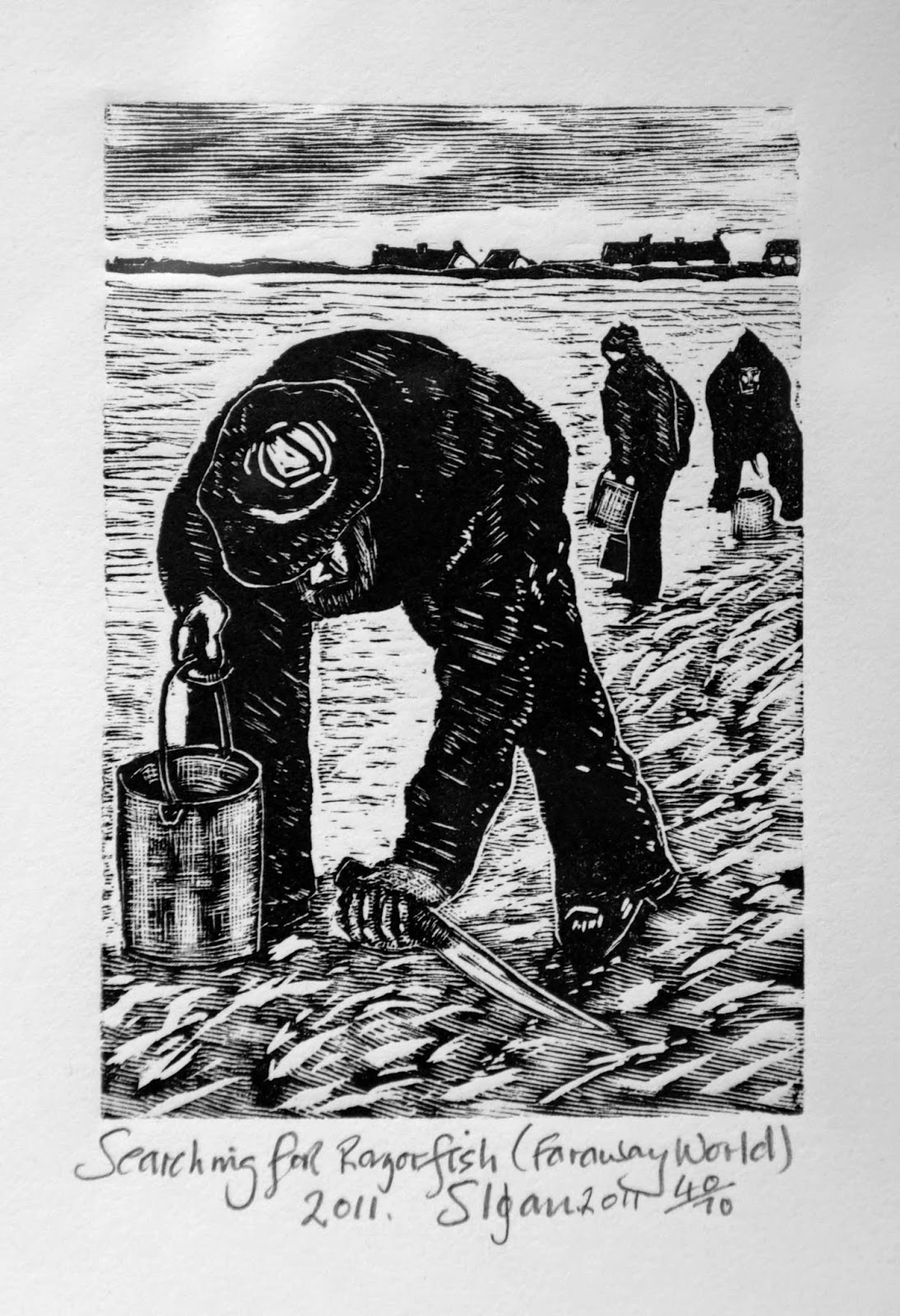 His father was a tailor and postman; his mother a Mackay from Sutherland who came over to work as a waitress in the Stromness hotel, where George himself passed a fair bit of his life, which was blighted at an early stage by tuberculosis. 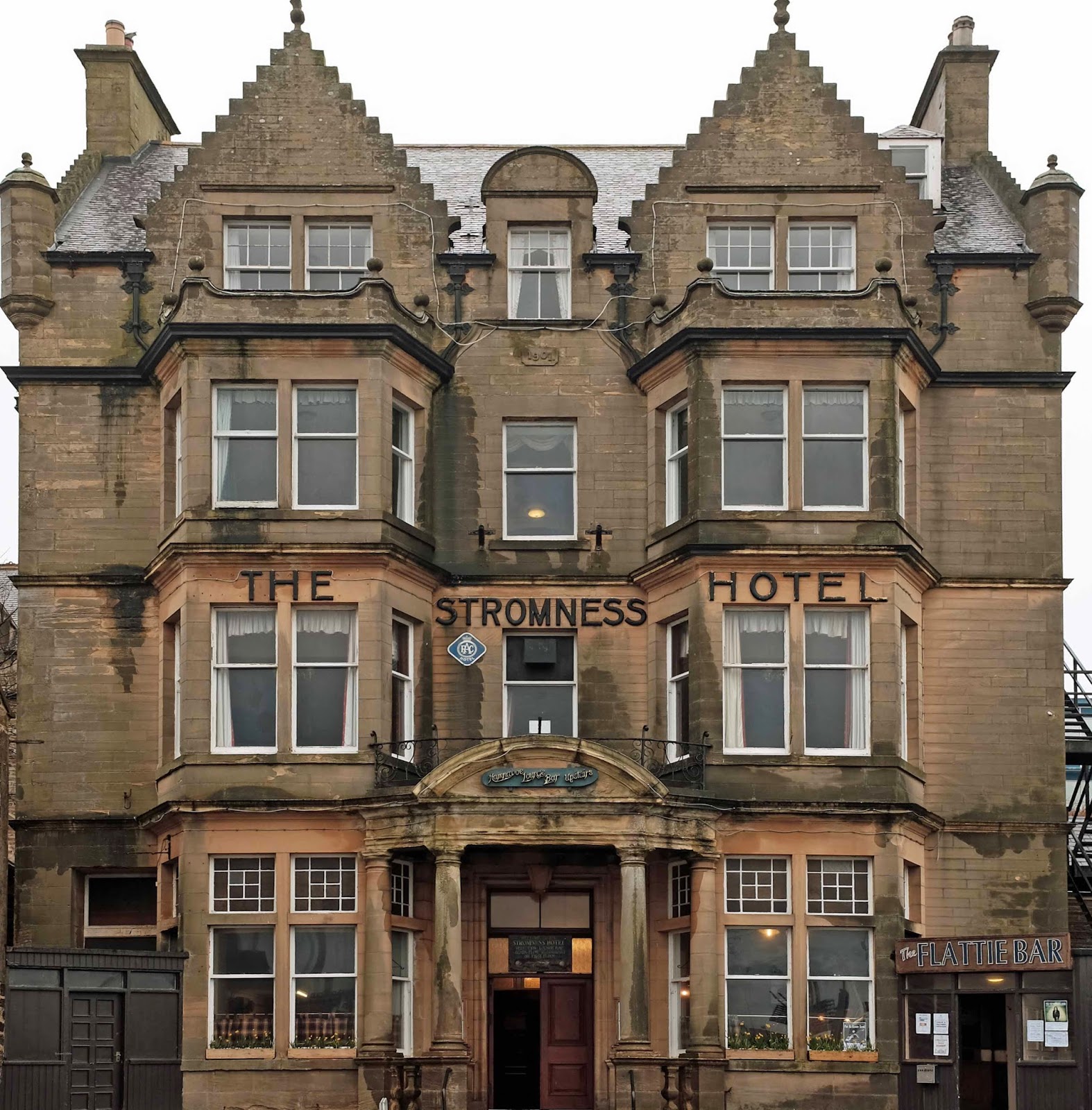 Orkney is another world, even today, with flights and ferries bringing ever more like me, to dilute the past with our global warming and our facile tourism.  Yet Orkney is another world, and George Mackay Brown's writings preserve some of its secrets. He died in 1996, but has left a range of work inspired by the eternal cycle of life on Orkney..... 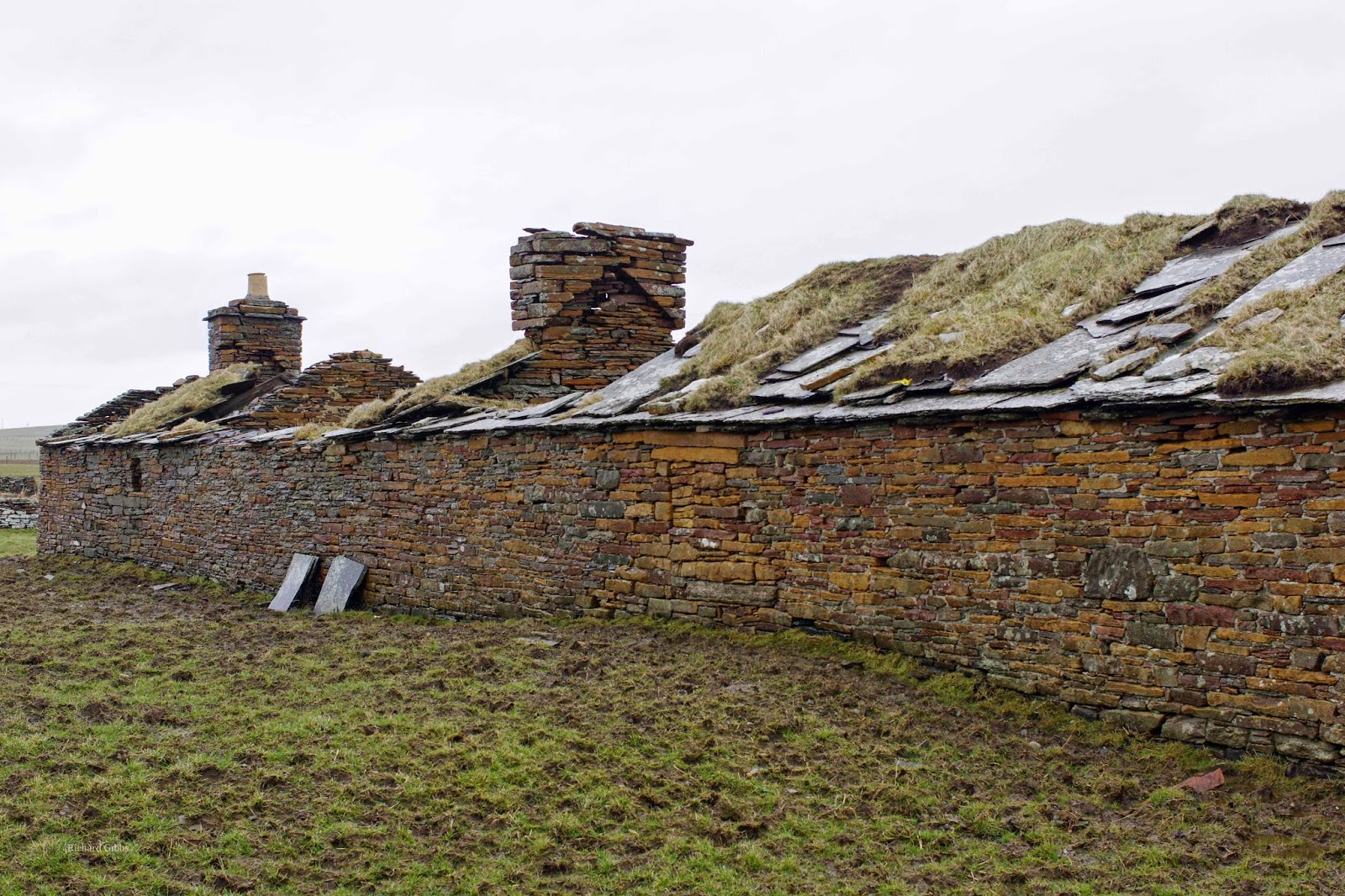 In the finished house a flame is brought to the hearth.
Then a table, between door and window
Where a stranger will eat before the men of the house.
A bed is laid in a secret corner
For the three agonies – love, birth, death –
That are made beautiful with ceremony.
The neighbours come with gifts –
A set of cups, a calendar, some chairs.
A fiddle is hung at the wall.
A girl puts lucky salt in a dish.
The cupboard will have its loaf and bottle, come winter.
On the seventh morning
One spills water of blessing over the threshold. 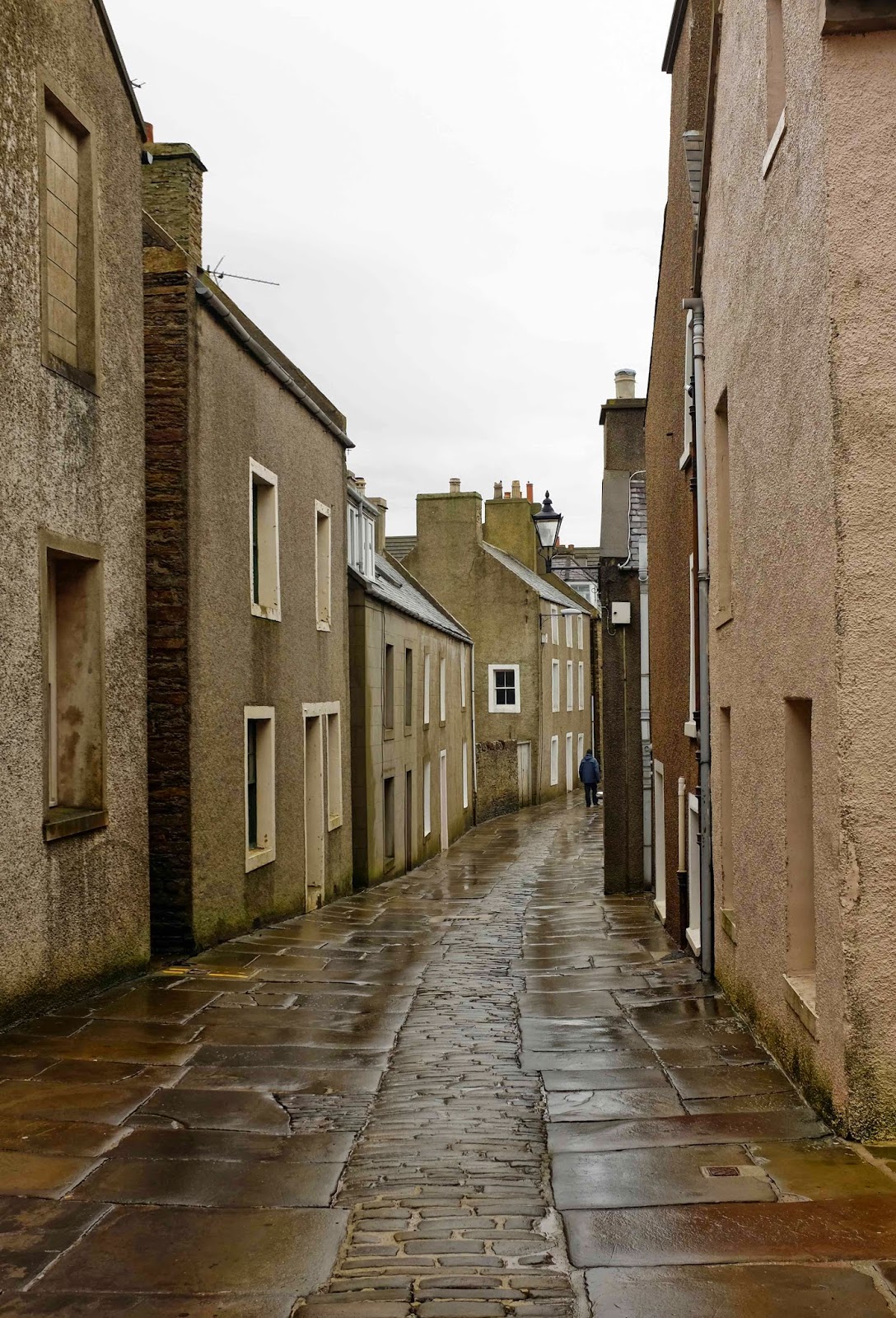 As I stand at the rail of the MV Hamnavoe, the shadows of Stromness dissolving into dusk, I hear Peter Maxwell Davies's Farewell to Stromness in my head. Corny, yes, but it fits.... Apparently (and not really surprisingly) this is Maxwell Davies's most popular piece - especially requested for funerals.

The captain announces a strong swell in the Pentland Firth, though the ship barely stirs. I salute the Old Man of Hoy as we pass, wondering if we will meet again, and then, in a blaze of gold, we blend into the mainland of Scotland at Scrabster.

Orkney is behind me now in a turbulent reflection of the sunset.

Is it really there?  Where did the time go? 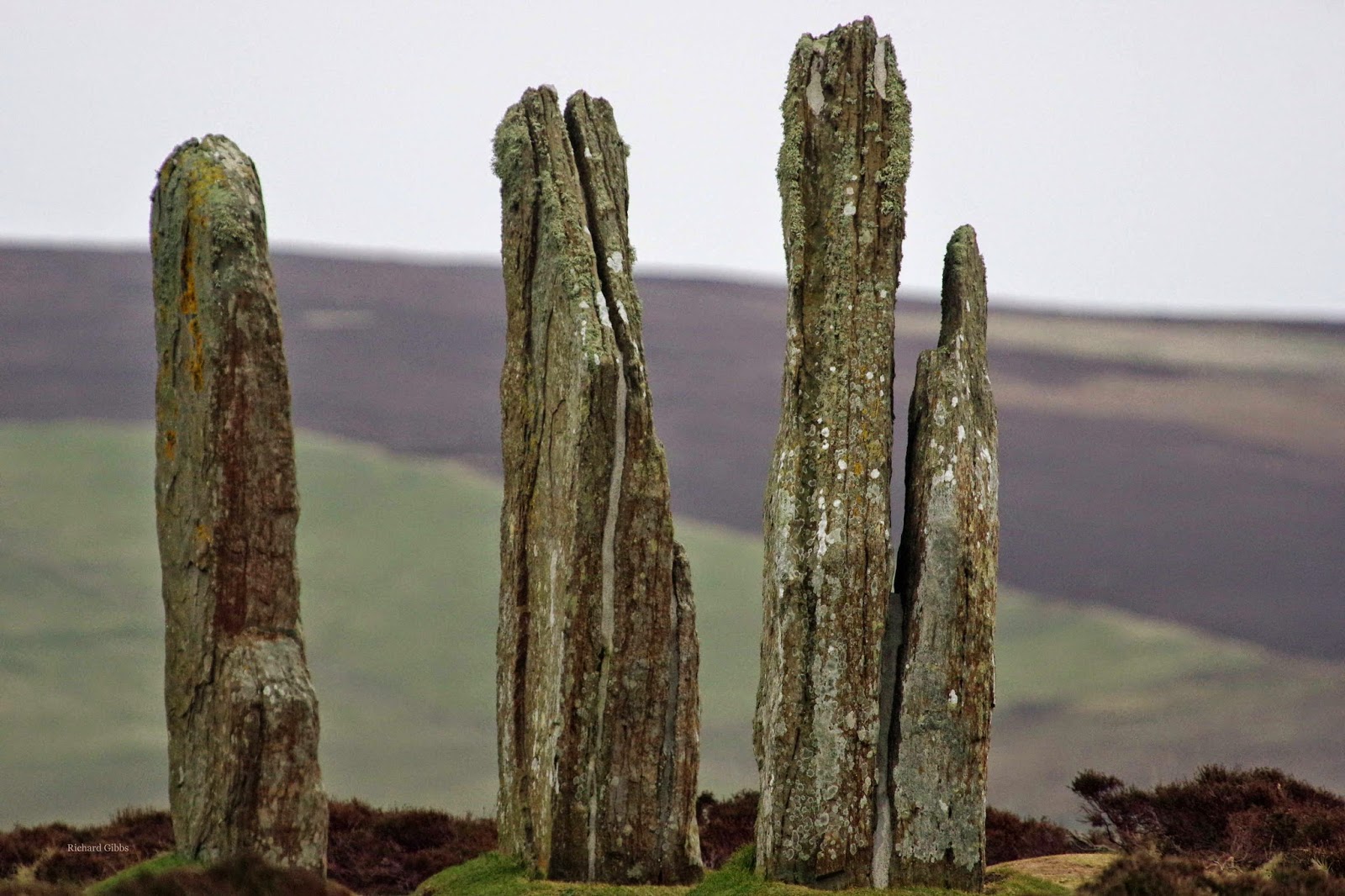