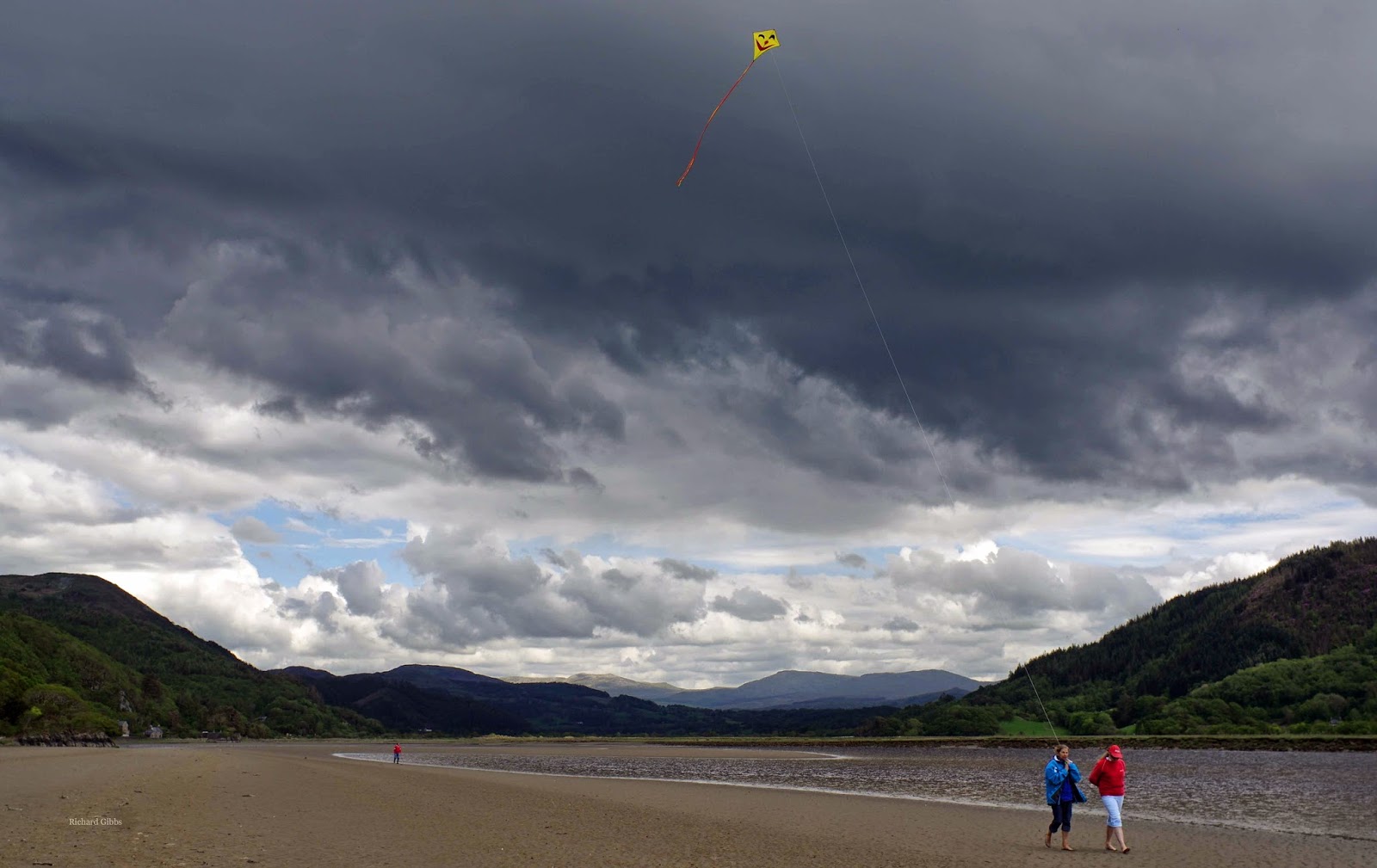 In Song at the Year's Turning (1955) R. S. Thomas published his poem, A Welshman to Any Tourist.

We've nothing vast to offer you, no deserts
Except the waste of thought
Forming from mind erosion;

I would like to think he was exercising wry wit, though the priest poet was rarely funny.... What was he thinking when he wrote?

No canyons where the pterodactyl's wing
Casts a cold shadow. 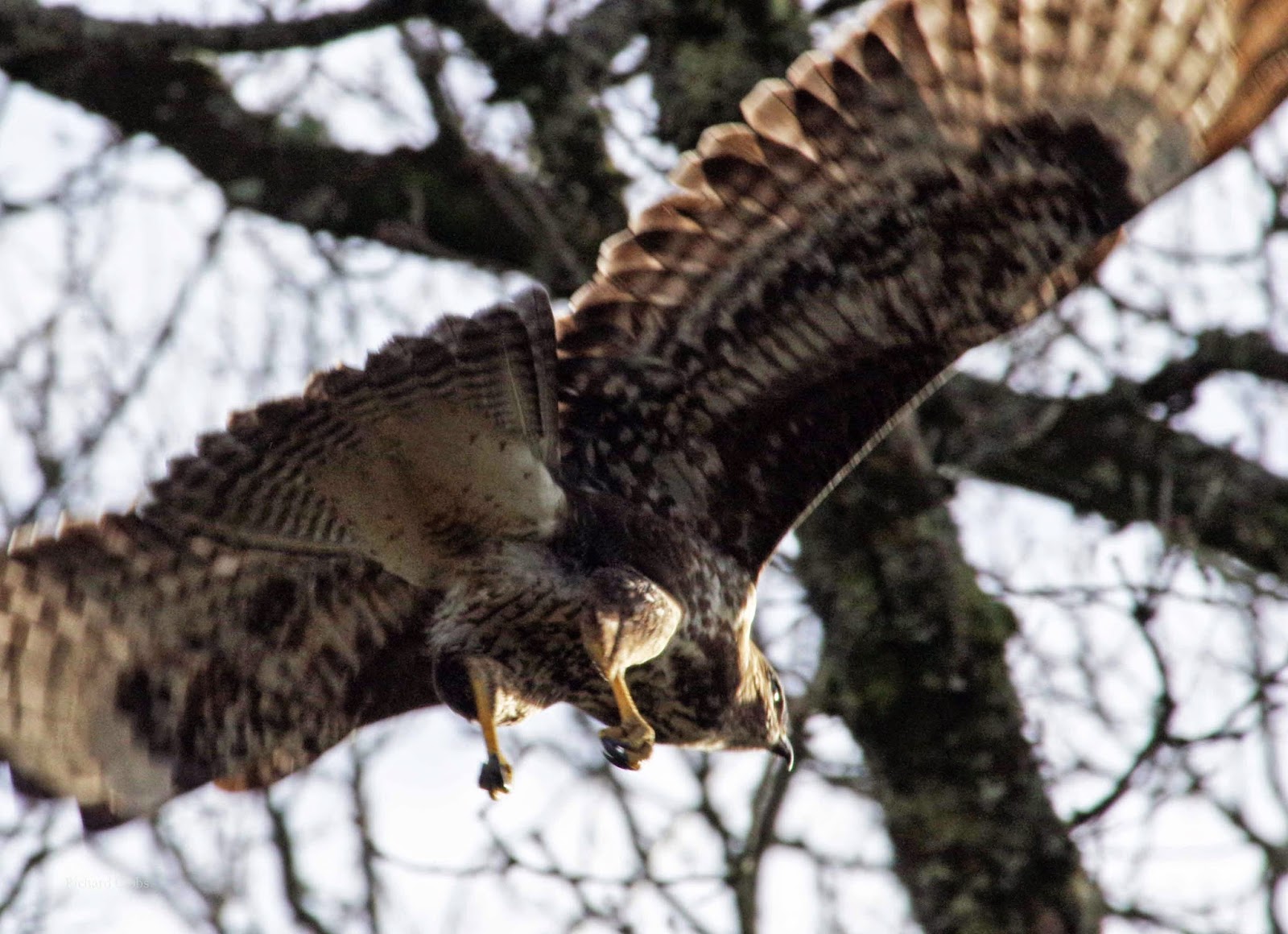 Had he never walked in the foothills of Cadair Idris, where Buzzards flap their pterodactyl ancestry in your hair?  He did at least allow that:

The hills are fine, of course,

Bearded with water to suggest age 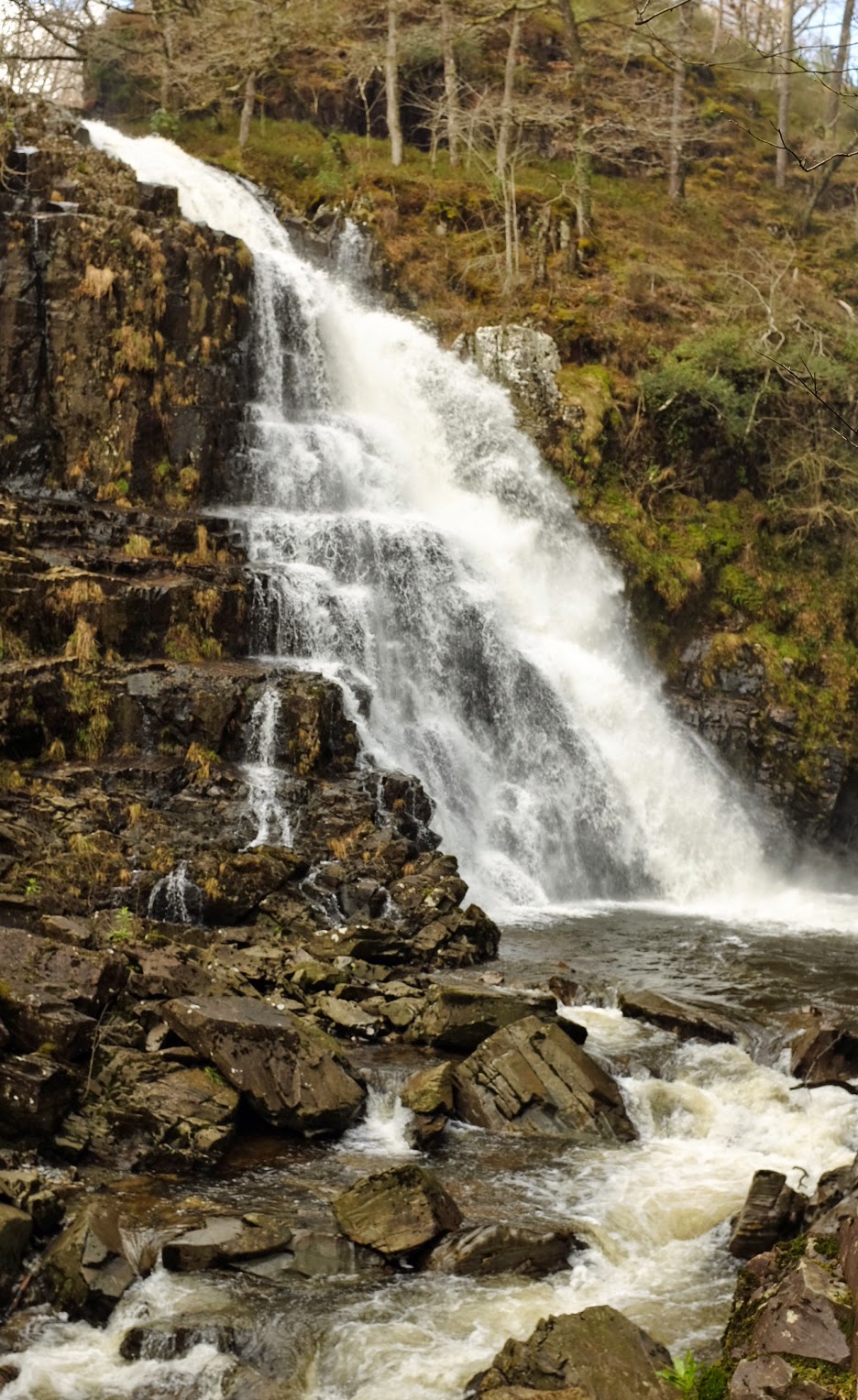 And pocked with caverns,
One being Arthur's dormitory;

He and his knights are the bright ore
That seams our history,

But shame has kept them late in bed. 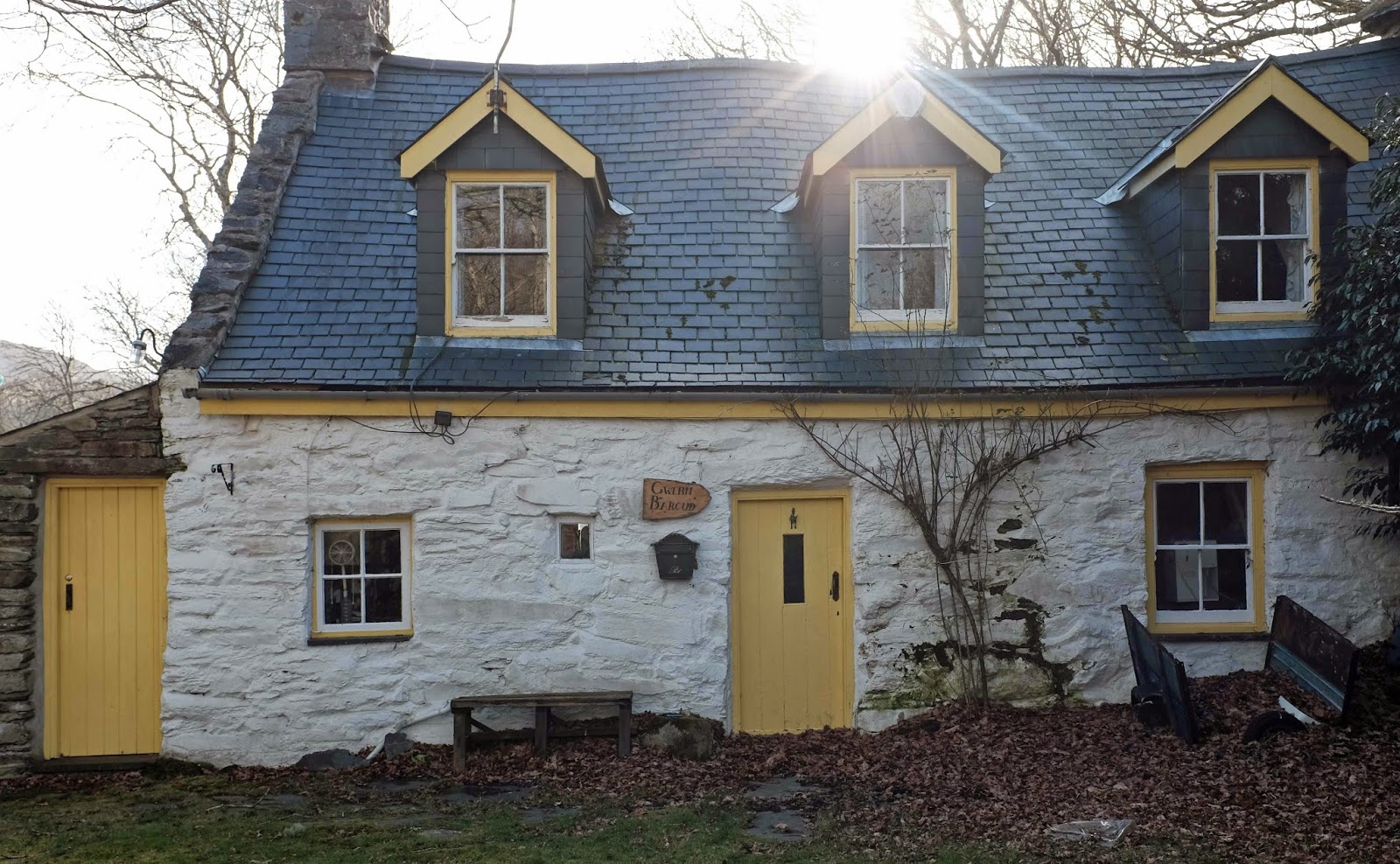 I don't know for sure that it is shame that keeps people abed here, or the weather, which can be watery, to say the least.  Even the slate roofs seem to flow downhill...

But Dolgellau has its strengths.  In the Parliament House we drink home made soup, served from the ironmongery counter, and next door demonstrates that fashion is always in in this part of the world, or at least it was in 1854.....  Perhaps King Arthur may have siopped here....?  He is rumoured to have passed this way. 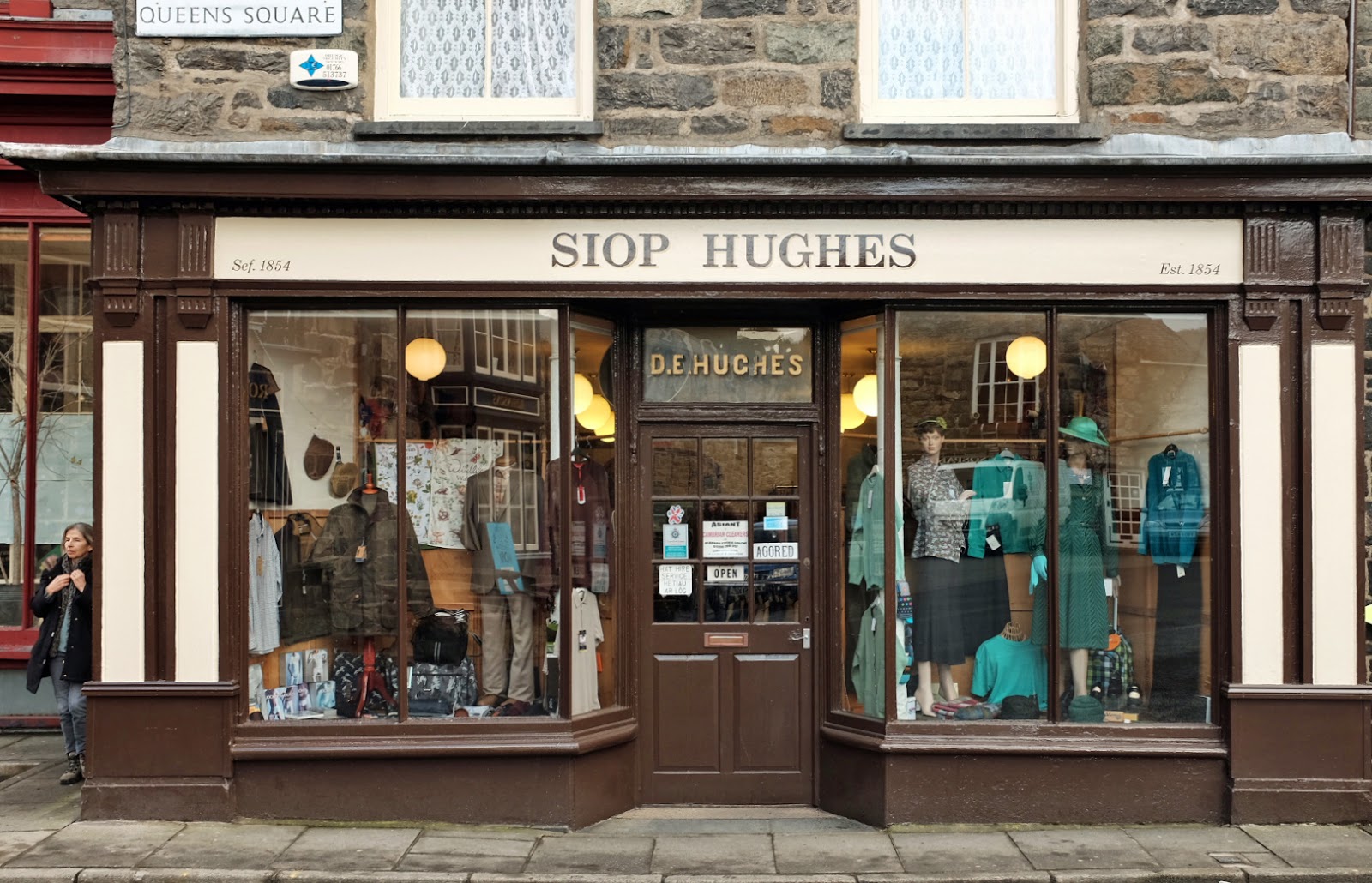 In one of the pubs a cider drinker tells me that he can't read, which is why they took his sniper's licence away.....  But I lose at pool notwithstanding, and cannot get the wifi to work.

So I take to the hills, where R S Thomas did know what he was talking about.....

Like a painting it is set before one,
But less brittle, ageless; these colours
Are renewed daily with variations
Of light and distance that no painter
Achieves or suggests.  Then there is movement,
Change, as slowly the cloud bruises
Are healed by sunlight, or snow caps
A black mood; but gold at evening
To cheer the heart.

This view, above, is what you see from our friend's house, White Horses (Rhuddalt) at Bontddu, which, sadly, is currently up for sale.  It's a view that R S Thomas would have waxed cynical about, or which his namesake Dylan would have found almost equal to his boathouse.....

To draw back a little, and to climb the hill between Taicynhaeaf and Llanelltyd, along the New Precipice Walk, you get a view of the whole Afon Mawddach (River Mou thk), with Cadair Idris to the south and Barmouth Bay to the West (ish).

Of course, despite our best optimism, the sun does not shine all the time.  But this scenery is breathtaking even when the sun goes in....

Walking here is breathtaking - in more than one way.  I do not have the lights for heights, and I puff as soon as the incline is more than a thick pile carpet, so reaching three hundred metres above the fairly obvious sea level below me in little more than a mile is, well, breathtaking!  Have another look at this view. And then in detail, the scenery is full of variety, from fern-bedecked deciduous trees.... 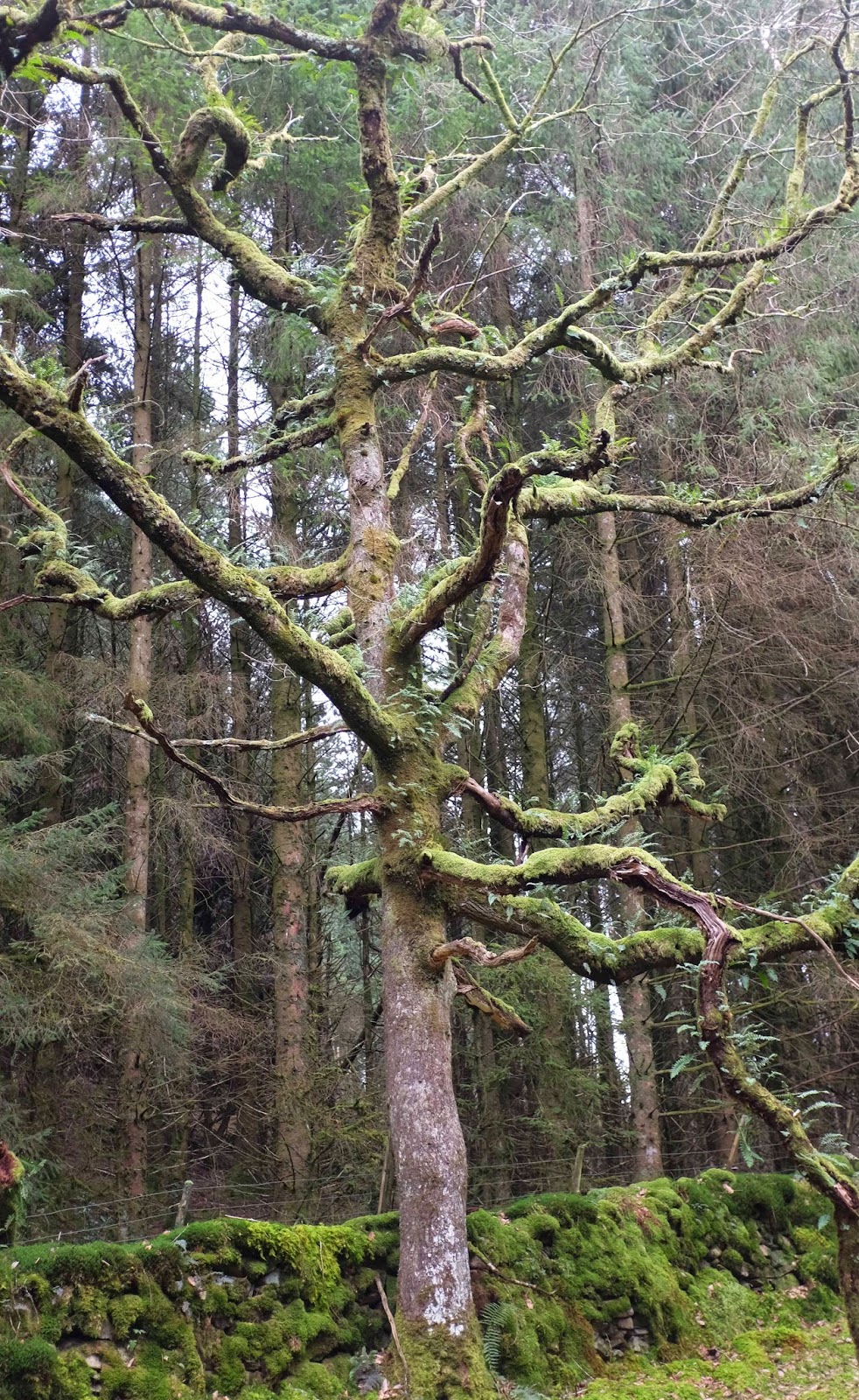 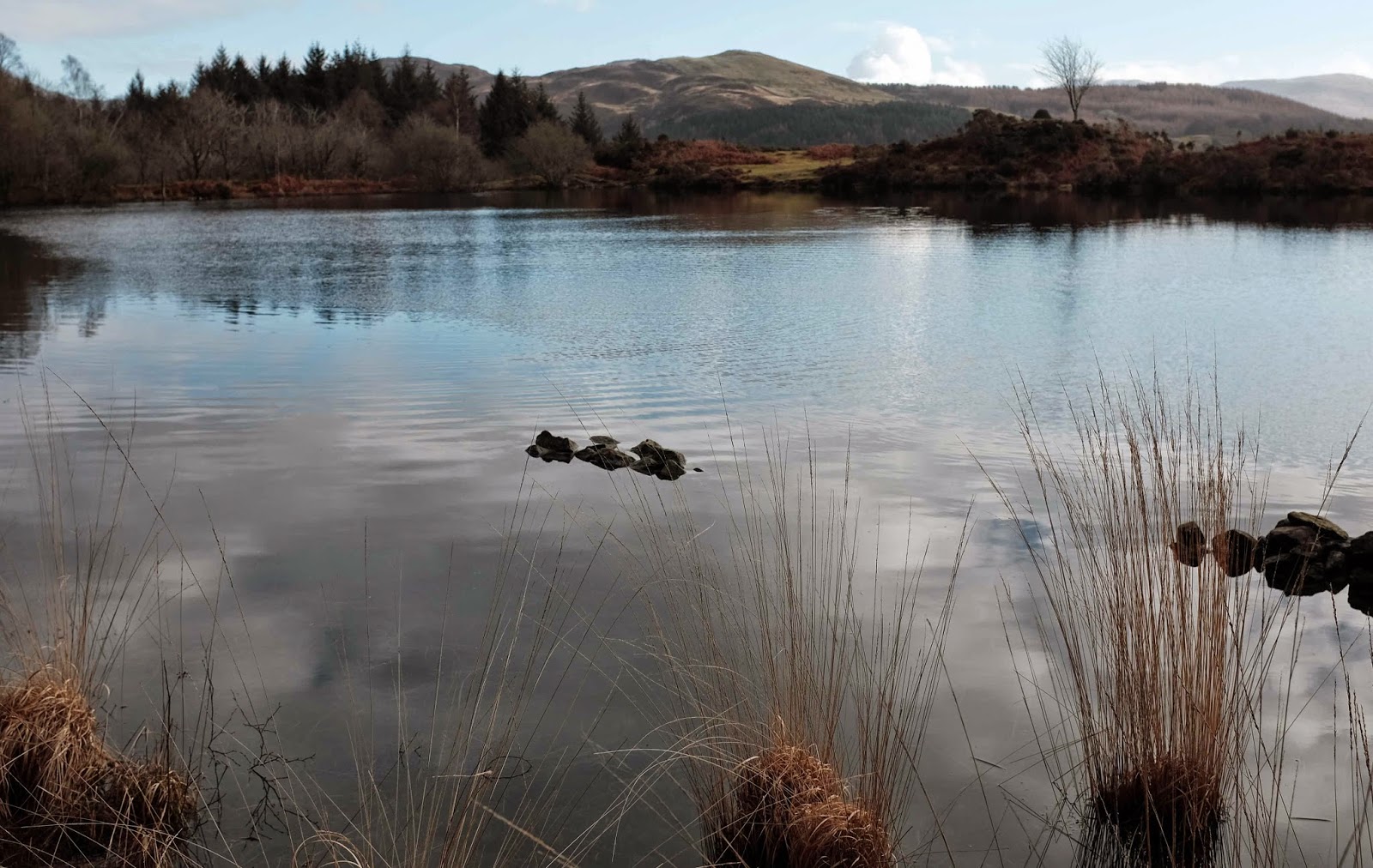 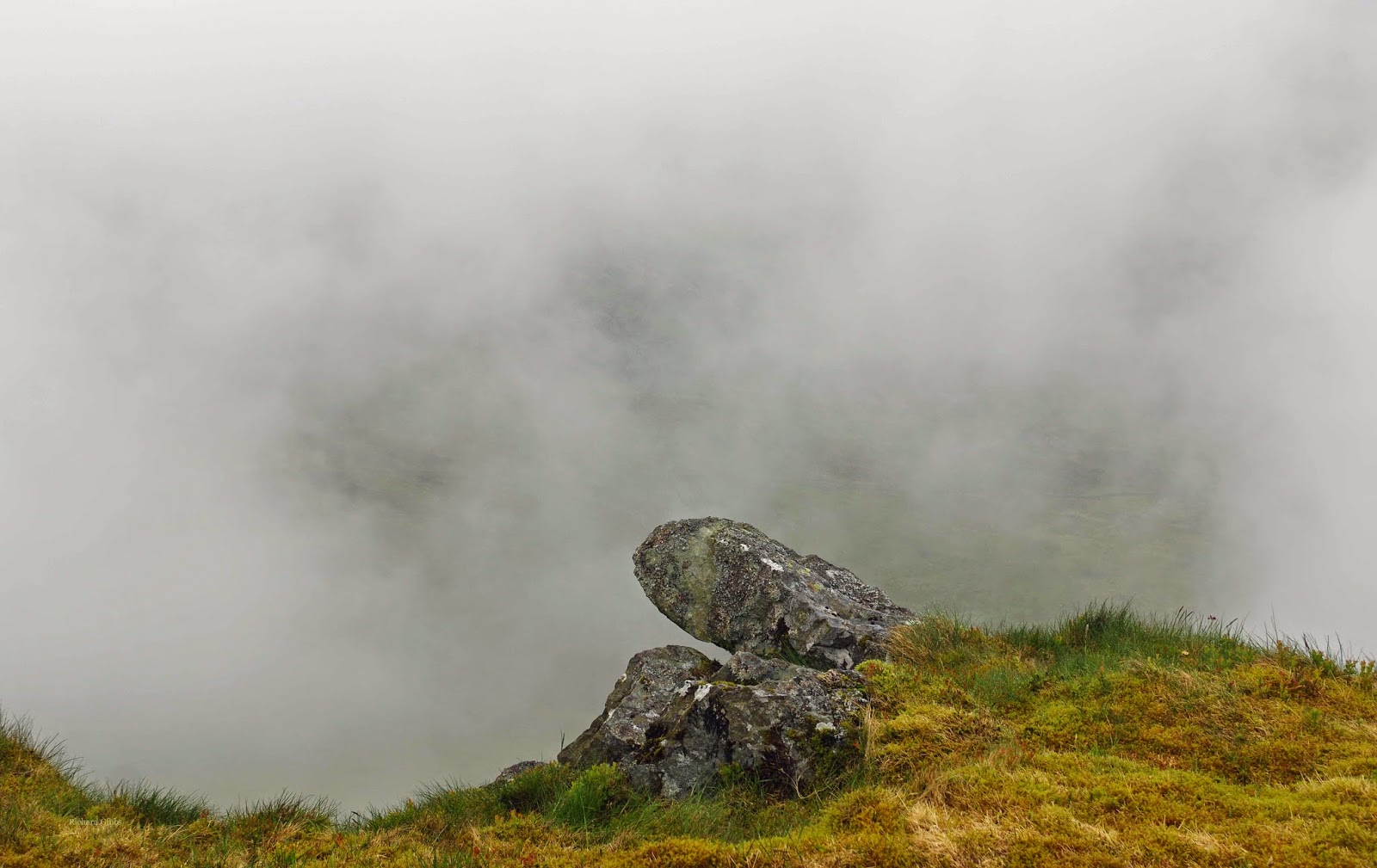 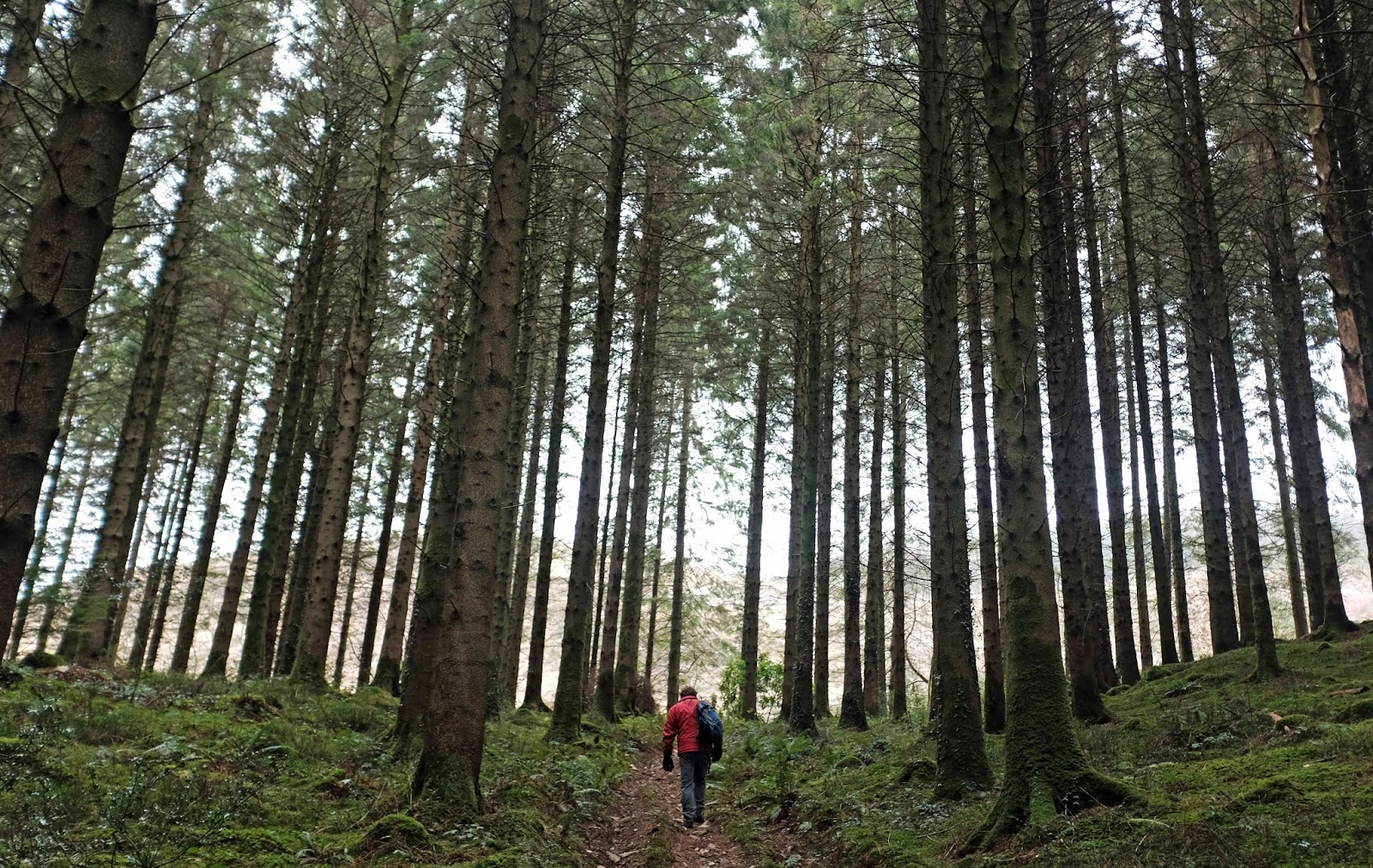 Down to reed beds on the tidal salt marshes..... 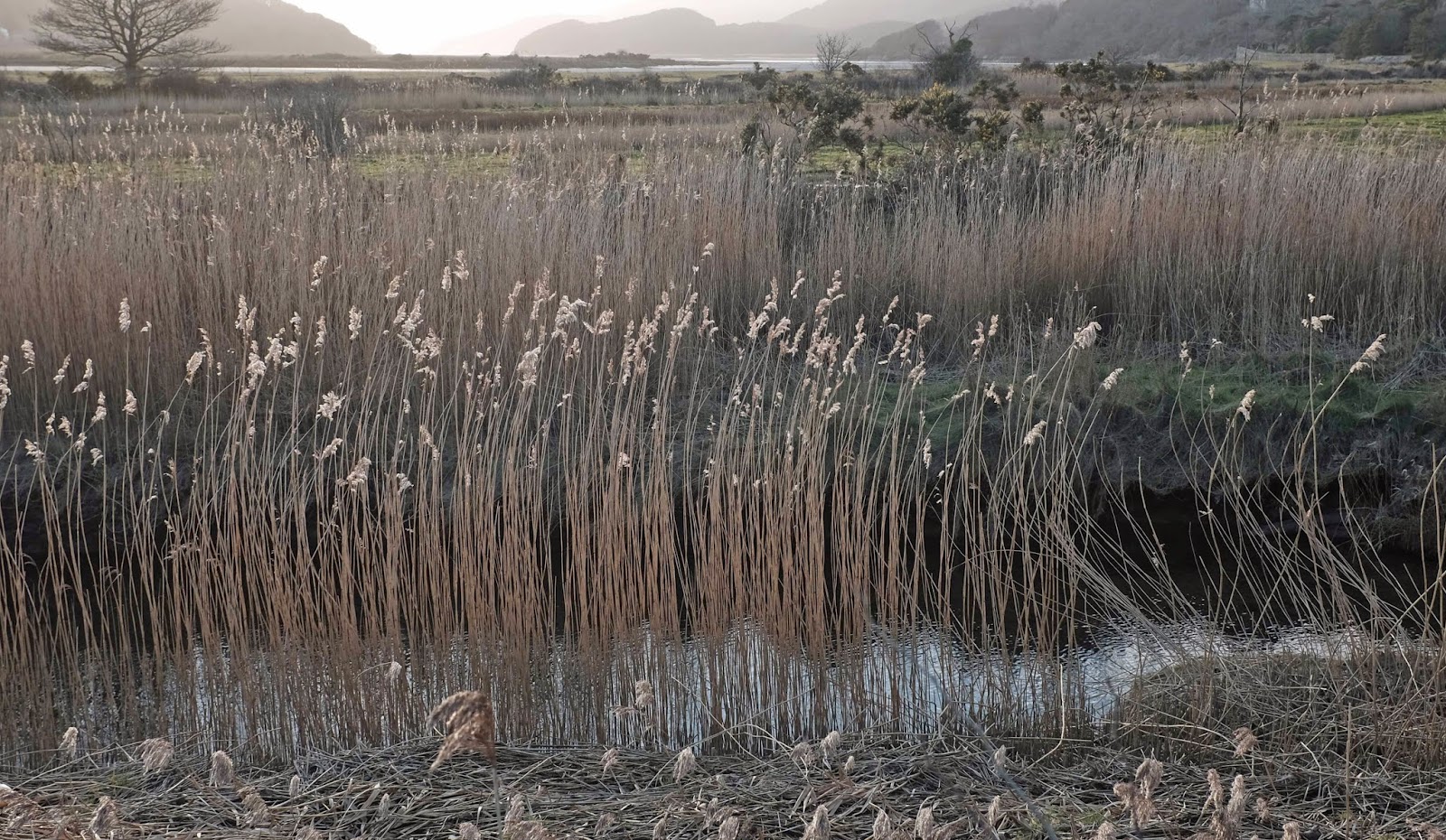 And back to the shifting sands of the estuary, with a glimpse of Rhuddalt, where ship-building was once a major industry..... 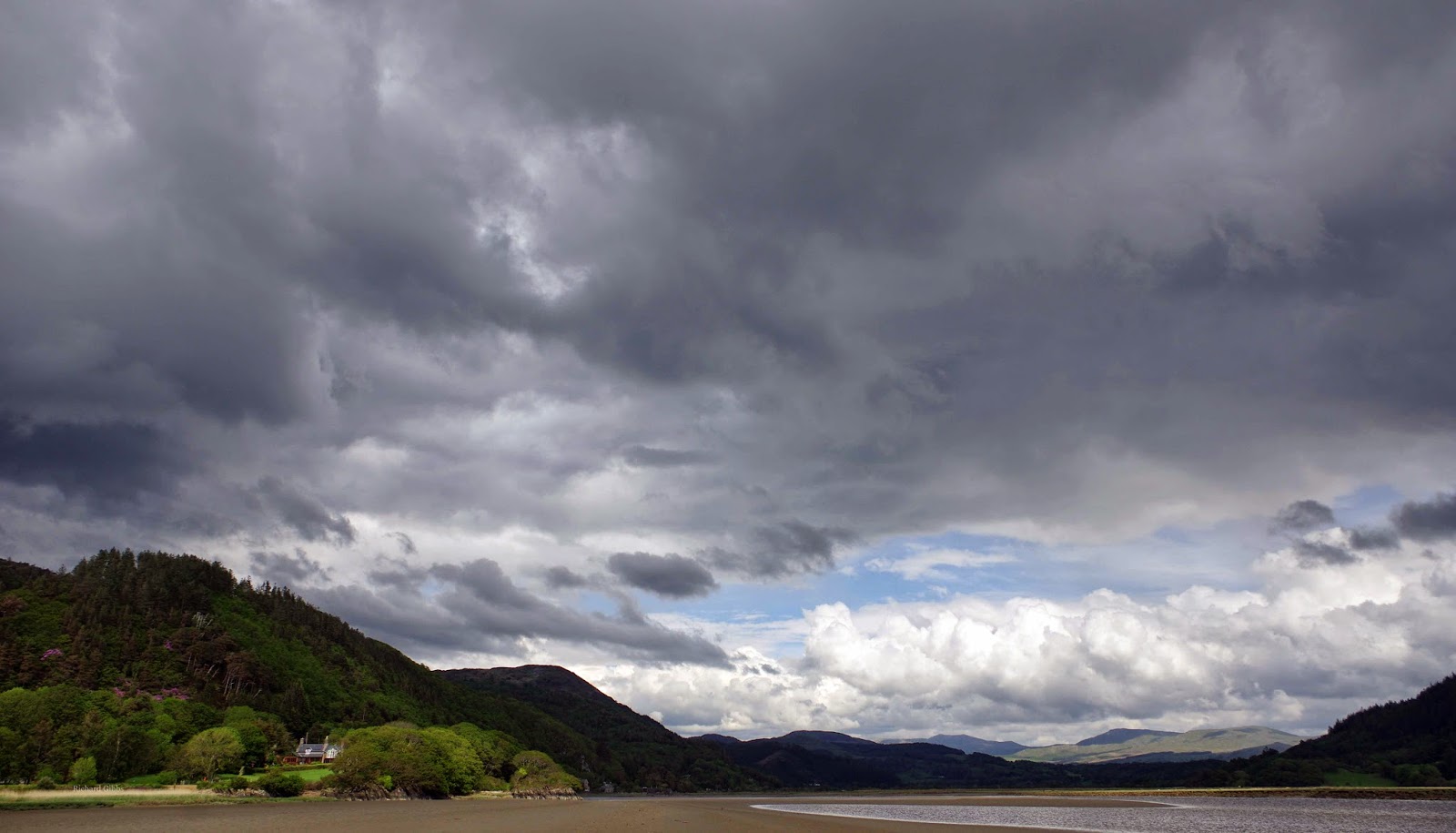 I have respect for R S Thomas.  His words ring true, if uncomfortable. Sometimes, for me, his preacherly tone is too much thought for the day, but his understanding of the Welsh world, and his voice, are for me grand drops in the rainstorm of literature.  At a conference in Cambridge, in 1986, he appeared having just driven across from his Welsh home, in his seventies; he stood tall and austere -  a rugged statue amongst the reedy literati.

As a poet, at his best, he had the ear, and the authority, of Yeats, though no one can approach the latter's scope.  Thomas spoke with a ringing English, less plummy than Dylan, more tuneful than W B, but with the gest of a master....

As I ramble in these wild hills, stumbling across mole hills, tripping on rabbits, I rehearse snatches of Thomas's words: I hear the names of those who might have dwelt in what are now holiday homes - Dai Puw (He was no good); Job Davies (eighty-five winters old, and still alive/After the slow poison/And treachery of the seasons); Walter Llywarch (Born in Wales of approved parents,/Well goitred, round in the bum);  Evans (Yes, many a time/I came down his bare flight/Of stairs into the gaunt kitchen/With its wood fire); and Iago Prytherch (his name, though, be it allowed,/Just an ordinary man of the bald Welsh hills,/Who pens a few sheep in a gap in the clouds.)

Somehow I hear a voice amongst these hills. Somehow I feel a tremor.  It's not the fleeting hawks, the birds of prey that streak past or stoop so fast - the kites, sparrowhawks, buzzards and peregrines (could that have been a goshawk?).  It's not the looping winds that chill the sandwich in your hand, or cool the tea before the steam has had a chance to rise.  It's a heart beating in the air; a spirit that yet thrives.....

I am a man;
I never wanted the drab role
Life assigned me, an actor playing
To the past's audience upon a stage
Of earth and stone; the absurd label
Of birth, of race hanging askew
About my shoulders.  I was in prison
Until you came; your voice was a key
Turning in the enormous lock
Of hopelessness.  Did the door open
To let me out or yourselves in?