I am inspecting the defences in Carlisle.  Just checking.  Just to make sure we will be safe, if things go wrong in the Referendum.....  Would not want the shoals of salmondites to suddenly sweep south, thinking that what might once have been theirs should be theirs again.

I mean, look what they did to Hadrian's Wall!

The castle is certainly sturdy, though I do think that perhaps someone should have been on guard.  The portcullis looked to be in working order, though it was open.  And there was no one around.  It worried me a little that I could have wheeled out the 25 pounder and offered the Scots a twenty-one gun salute and no one would have been any the wiser.

Or I could have hopped in the armoured car and gone for a tootle.  It's only ten miles to the (current) border.  Though I am not sure it had a valid MOT.

But I am not here to cause strife.  Instead I check out the local history.  There's reputedly been a pub on Fisher Street since the 10th century, and there's sort of been a King's Head here in Carlisle since William Rufus (later shot, just off the A31 in the New Forest) founded the Castle in 1092, though the Brigantes, (led by Venutius) and later the Romans (for example Quintus Petilius Cerialis) very likely stopped here (in the Flavian Fort) while waiting for trains to Glasgow or Oxenholme.  Mary Queen of Scots certainly stayed, though not by choice.  Bonnie Prince Charlie (not to be confused with the Prince of Wales) also passed by, in 1745. 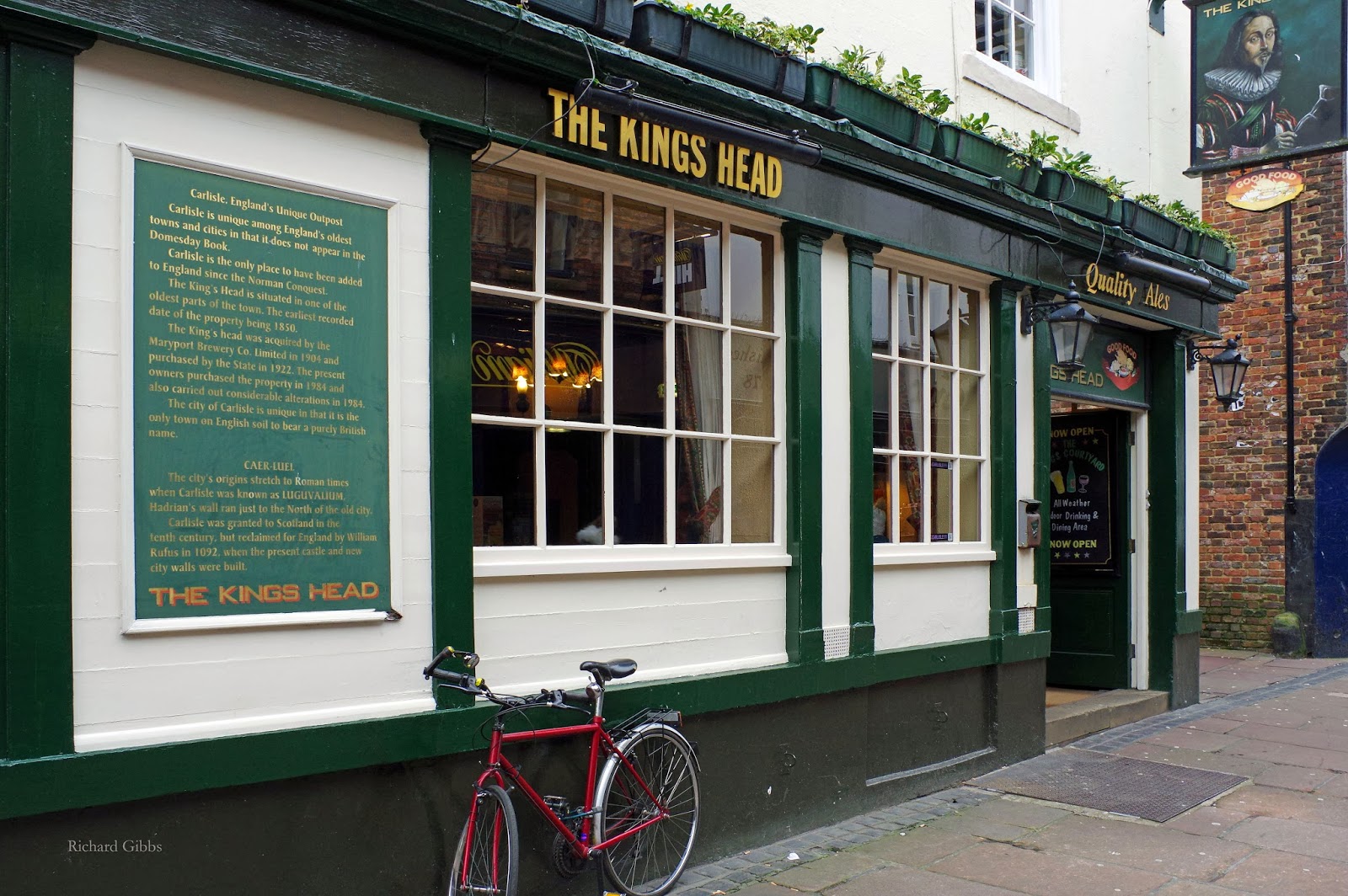 Peace has never been the watchword here.  There were two Roman walls (the Antonine wall was built in 142 AD and abandoned in 160) to try and control the violence in the Scottish Marches (the later name for the area) and after the Romans left in the 5th century the skirmishing worsened.  On a particular Saturday night in 945 Carlisle was wrecked by the Scots, who apparently did not like the Danes, and the city was left in ruins for over a hundred years.  William Rufus claimed it back for the Normans (though it had not figured in the Domesday Book); in 1122 Henry I founded an Augustinian Priory (which in 1133 became the Cathedral of the Diocese of Carlisle) but Stephen (the Usurper) gave Cumberland and Carlisle back to the Scots as a peace offering.

The locals must have been pretty confused at this time, because in 1157 the City was reclaimed by English forces, seemingly permanently.

However, in 1525 the Border Reivers had become so annoying that the then Archbishop of Glasgow, Gavin Dunbar, cast a curse on them.  Part of this has been engraved on a stone, now in the underpass by the Tullie Museum, Carlisle.  To read it you have to walk around anti-clockwise.....

The Archbishop's Cursing, quoted in The Steel Bonnets, by George MacDonald Fraser.


It should not surprise us that this is not always an area of Peace and Love.


To be honest, I am not sure that Carlisle welcomes visitors to this day, even though there is a very fine Tourist Information Office in the centre of town.  I speak as an elderly and infirm visitor, a mere inspector on government business, with a bad back and two heavy bags.  The train station has no left luggage facility, though a person in the information office indicated a bar which might have secured by belongings for a small price.  This bar, across the square, was shut, possibly terminally.  So I was constrained to puff and pant up past the Citadel (which surely could have housed a left luggage depot?) hoping to find solace with the ladies of the Tourist Office.

Negative. I might as well have been a Reiver.

It was only the kindness of the staff in the Bus Station that saved me, though I must admit I was about to turn away and shun the pleasures of this city, which of course include many simple necessities of life.... 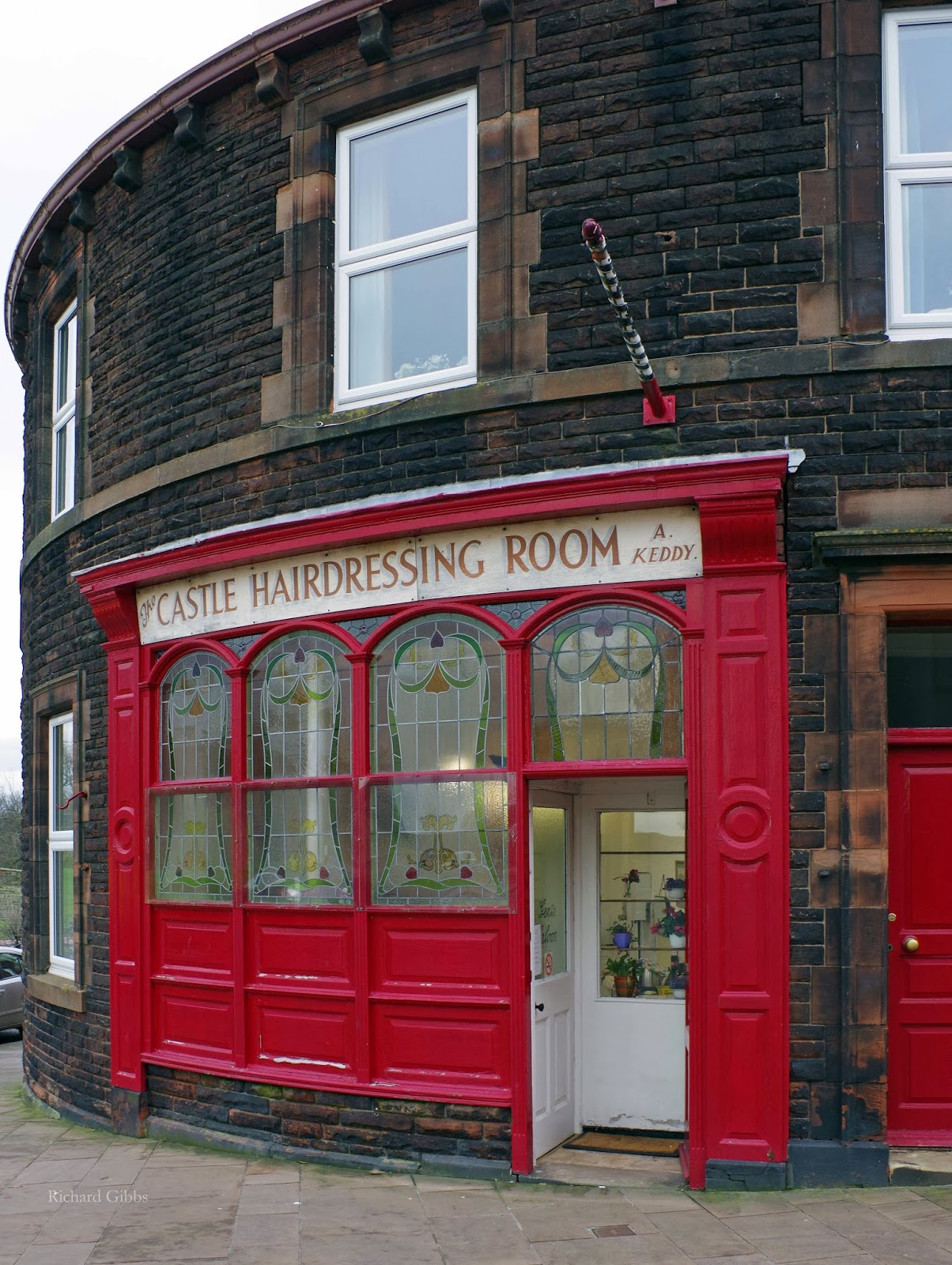 Anyway, I found refuge in the beauty and peace of England's second smallest Cathedral (only slightly larger than Oxford Cathedral, the Chapel of Christ Church College). This might have been bigger, had there not been a fire in 1292, had the Norman bell tower not collapsed in 1380, and had Henry VIII not ordered the dissolution of the priory in 1540. Add to this the demolition of the west end of the nave in 1650 and the use of the nave as a prison for Jacobite rebels in 1745, and you have some idea of the mixed fortunes of this outpost of Early English and Perpendicular architecture through the ages.

But, that said, it is a grand place, elegant and well-proportioned, and full of glories from times past.  The East Window's tracery dates from the fourteenth century, though the lower glasses are Victorian.  Stone capitals represent the Labours of the Month, showing the seasonal life of medieval farmers, with a peasant sitting warming his toes in front of a fire on one column, and the grape harvest on another..... 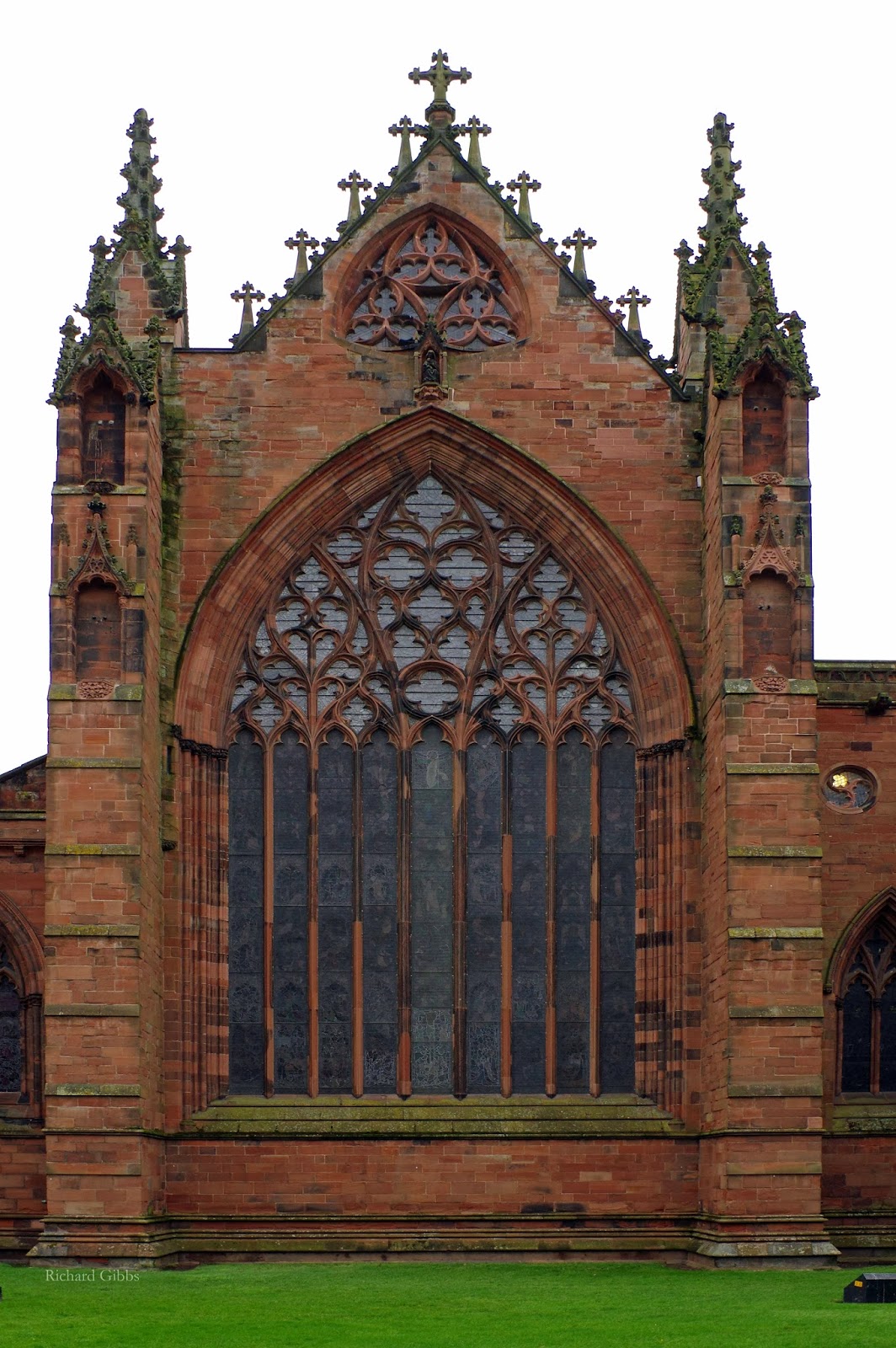 The graceful aisles hint at the austerities of a church that held the faith whilst disorder reigned: 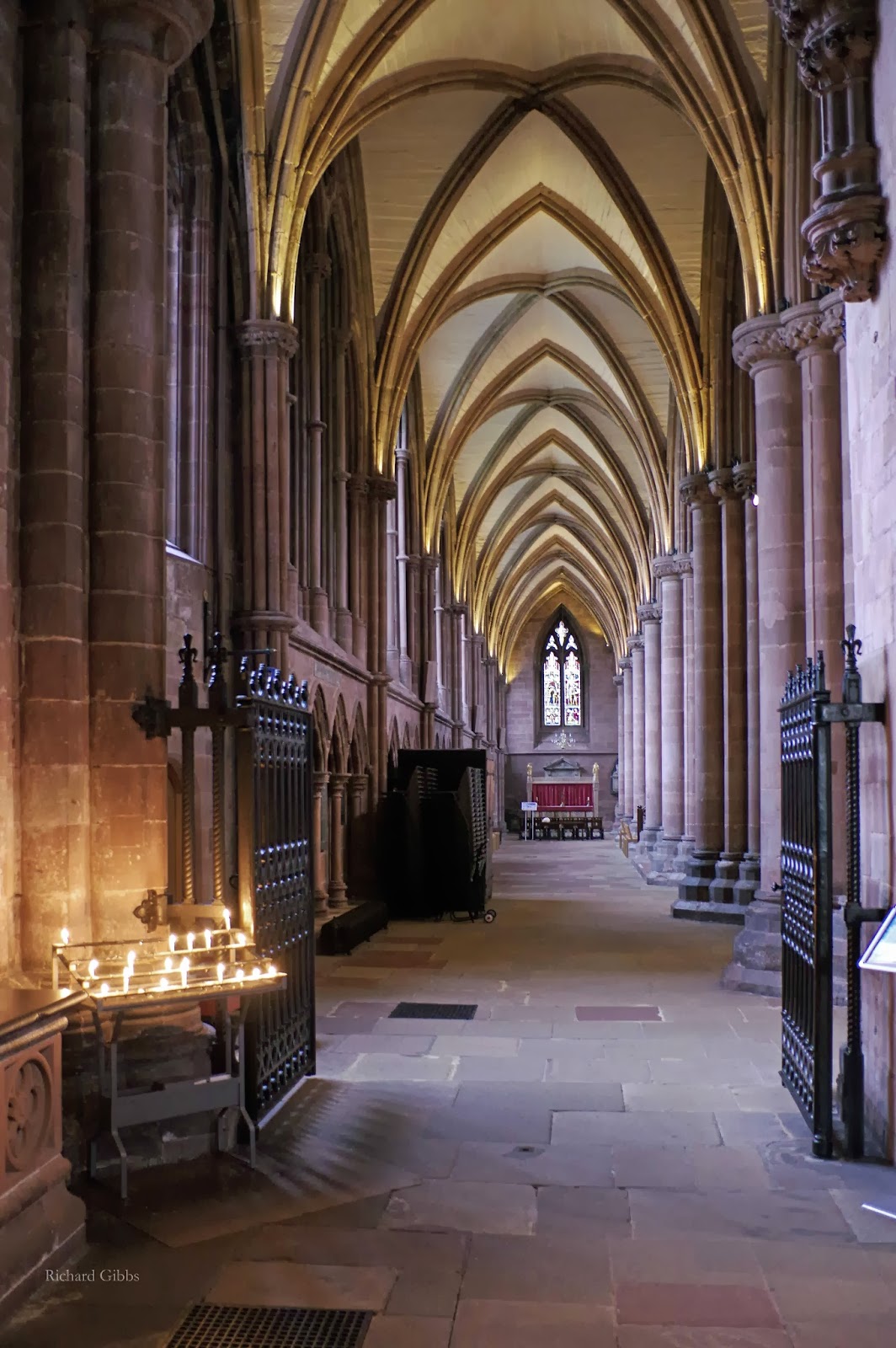 And the ceiling cheats us into thinking we really are under the heavens, although this gold, and lapis lazuli (from Afghanistan), was not put up until 1856 (by the same Owen Jones who decorated the Great Exhibition of 1851), when the original roof (which would have been supported by the angels, still extant) was stripped out. 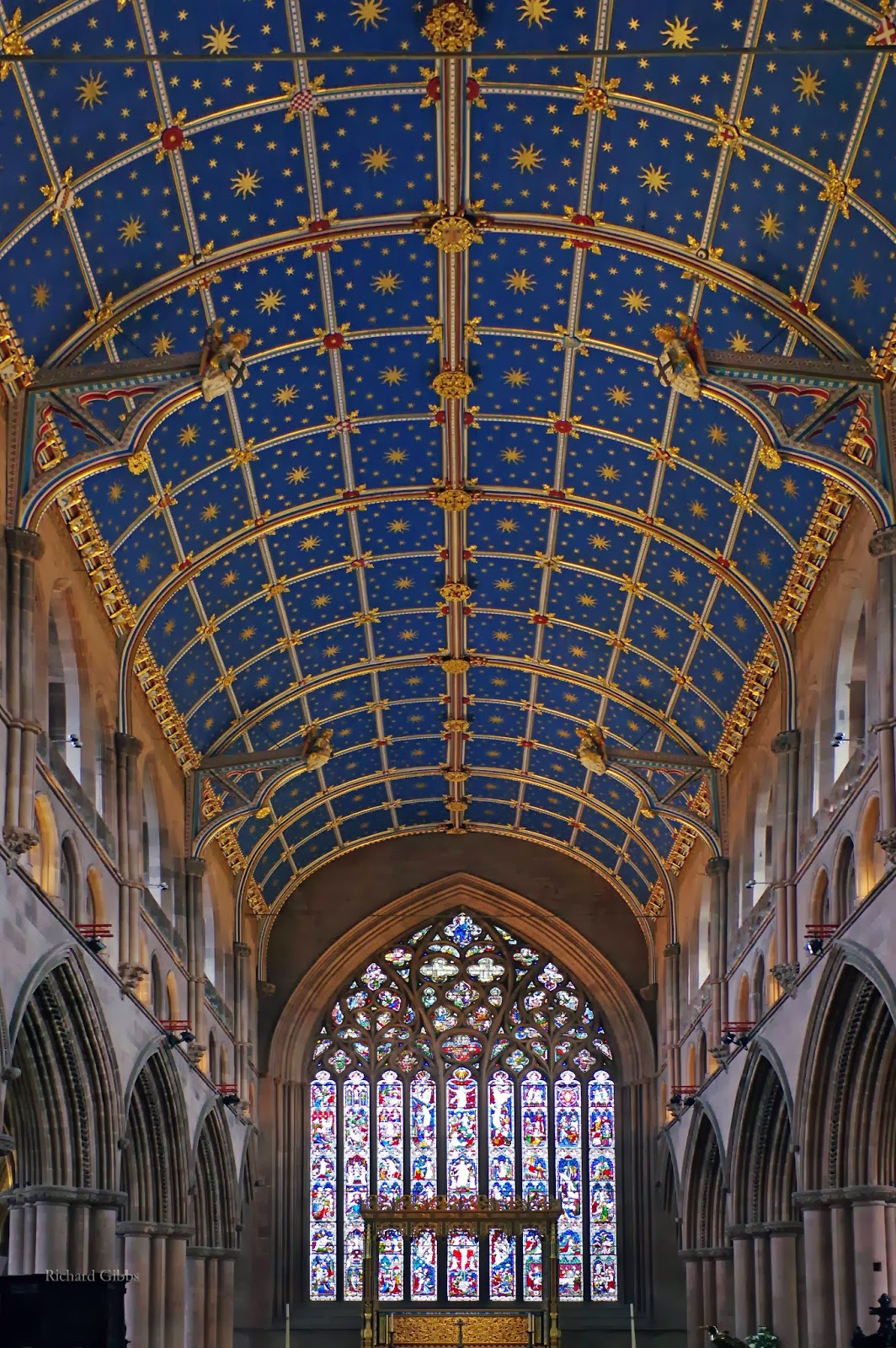 The Treasury displays works of art that have come into the Cathedral's possession, painfully depicting the suffering that puts us all to shame:

But some of the most interesting carvings lie hidden in the medieval choir stalls. 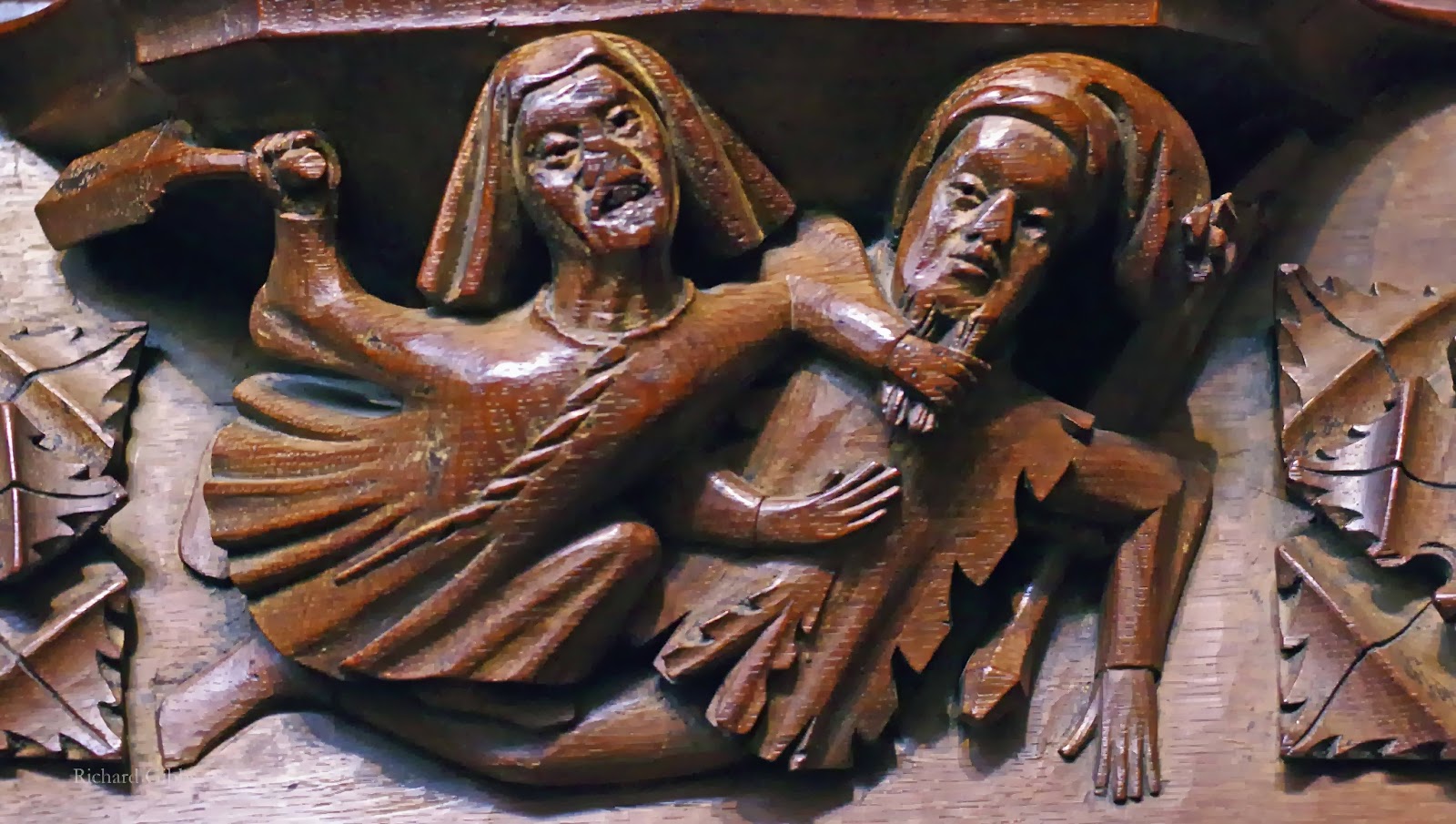 Misericords take their name from the Latin misericordia, or act of mercy, as these carved pieces were designed to support older, frailer, fatter and lazier, monks who found it hard to stand for hours in prayer.  So the seat was the seat, but tipped up so the incumbent could stand there was still a seat, as it were. 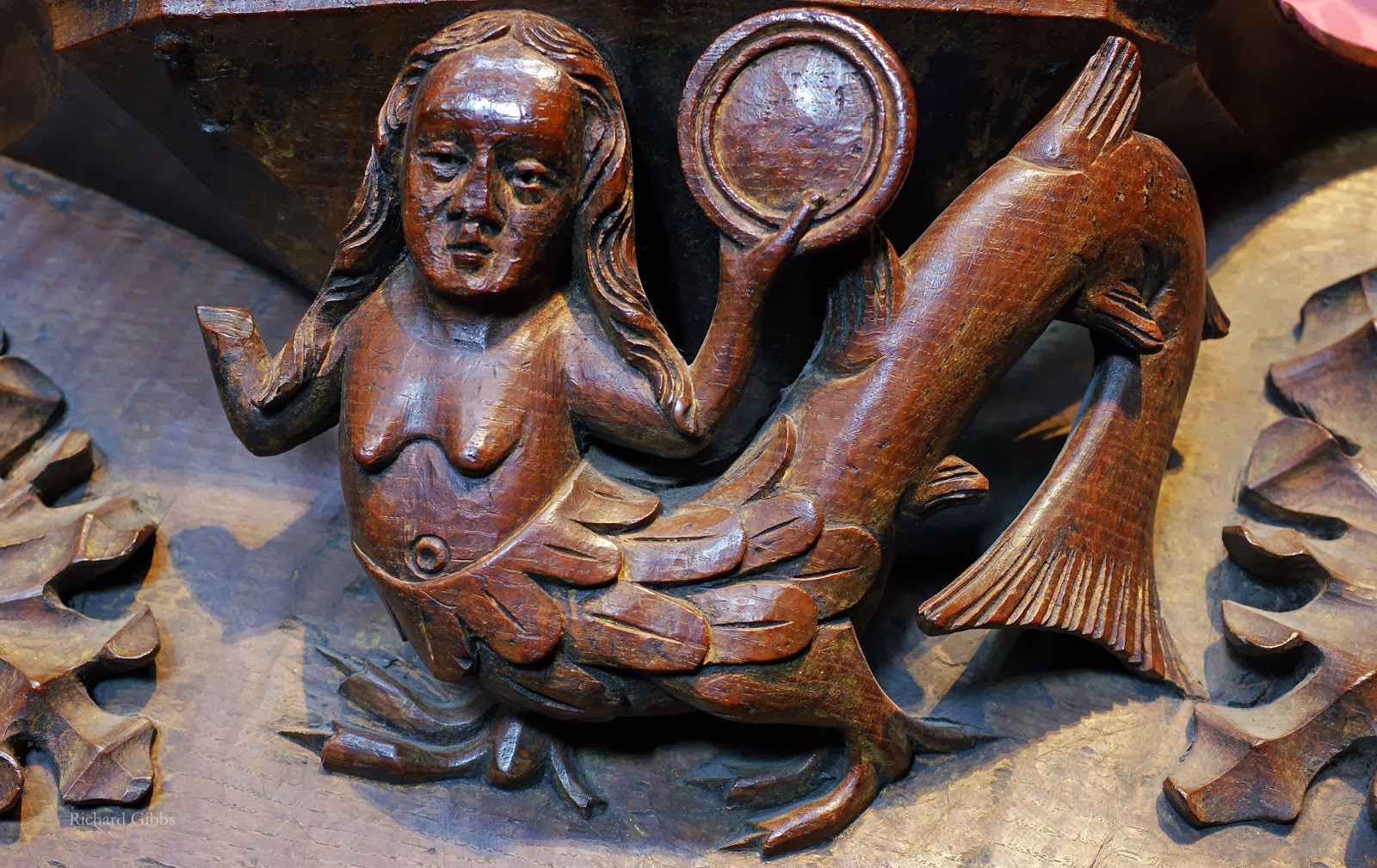 Here in the Choir of Carlisle Cathedral there are forty six of them, and as I move amongst them, I get a strange feeling that they are watching me, watching them.  The wife who pulls the beard and bashes the head of the impassive husband; the feathery fish-woman who perhaps rattles a tambourine;  the hairy man performing some aggressive dentistry on a reluctant dragon; 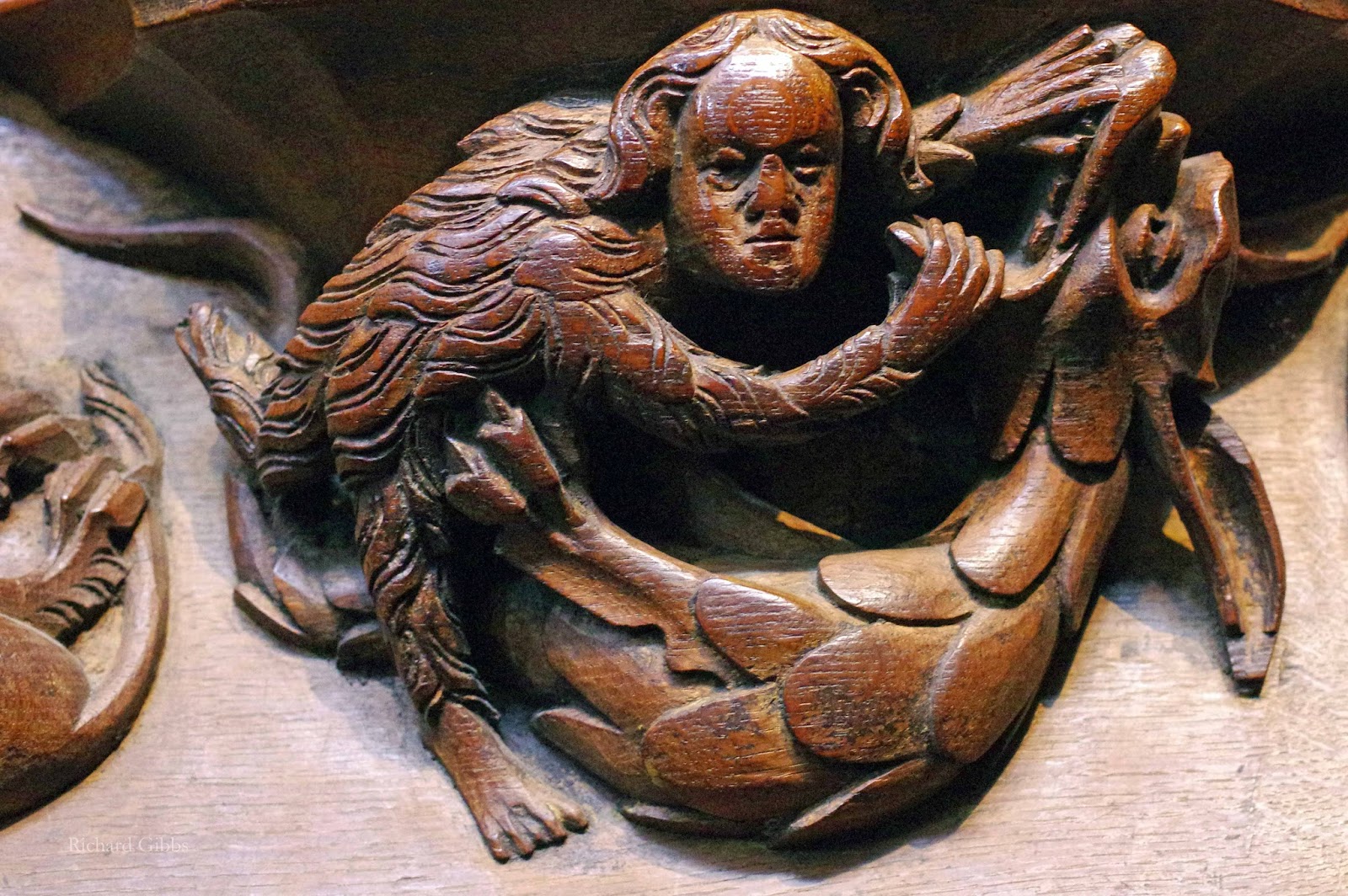 These fifteenth century carvings represent legends or subjects taken from the medieval bestiaries, but they also show us faces from the time.  These slinky friends are not human, but they are not so far from the political cartoons of Gerald Scarfe, or  Steve Bell, or Chris Riddell: 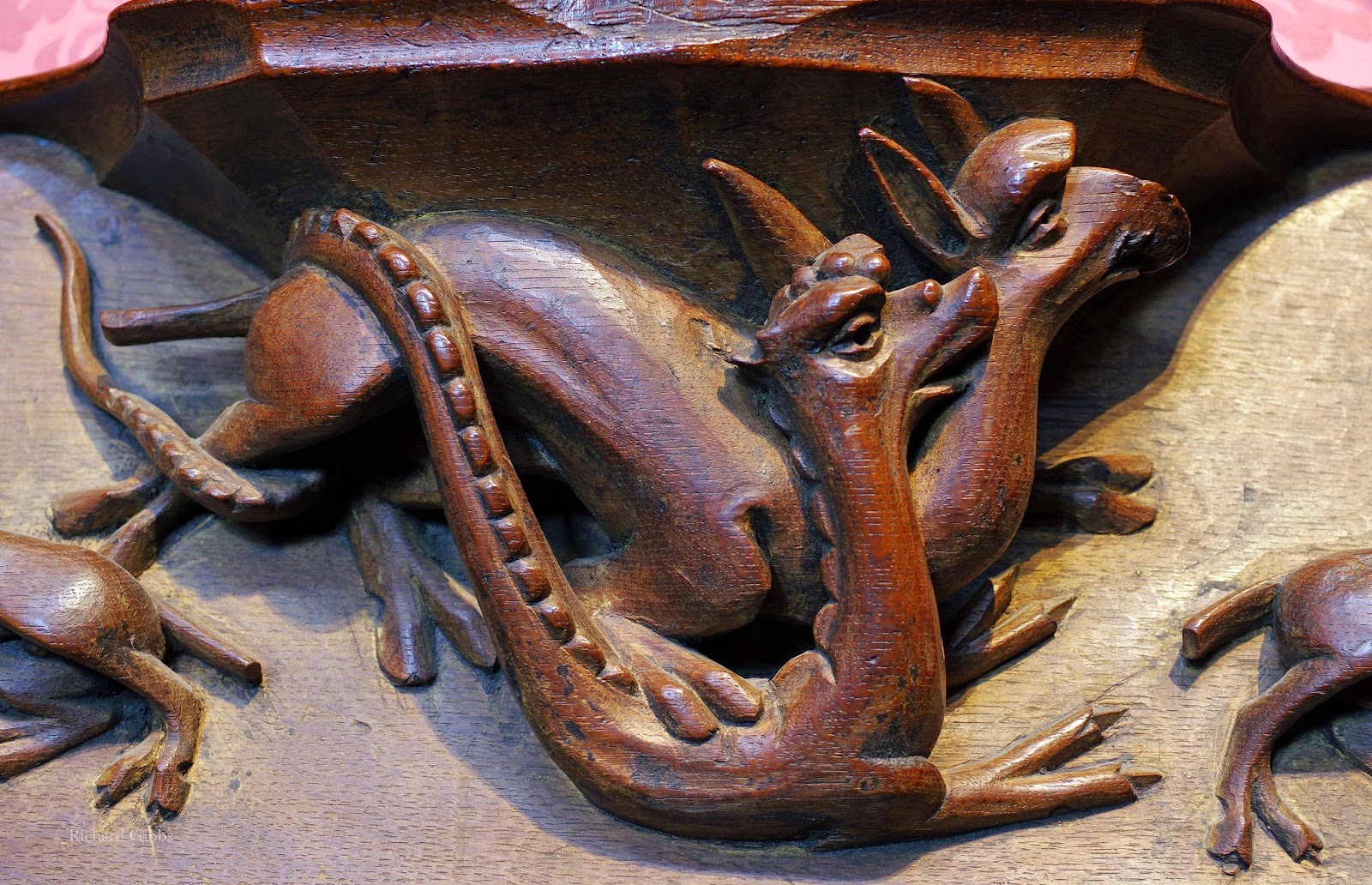 And then there is the serious parody, where a coronation, perhaps crudely of the Virgin Mary, or of some hopeful king, takes on a new meaning: 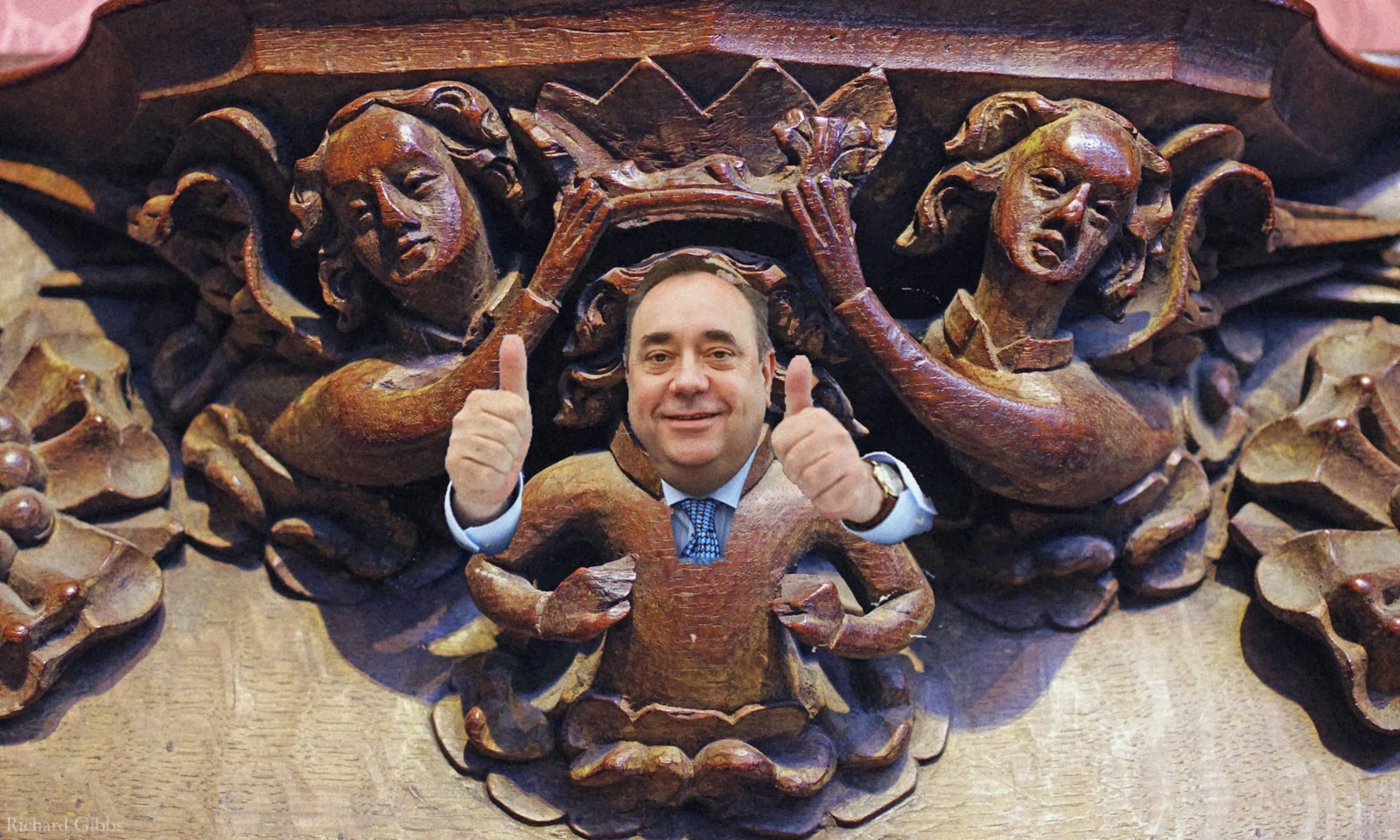 However, this is holy ground, and even the fog horn parping of organ tuning struggles to dim my haloed thoughts.

I study the walls, the paintings, the carvings, and the guide.  I note that the organ is by Henry (Father) Willis rebuilt etc etc. And I note that organist Henry Ford (1842 - 1902) came to Carlisle by stagecoach.  For a moment I think of John Ford driving through Monument Valley in a Model T, and then I realise a Gryphon is pecking at my trouser cuffs. 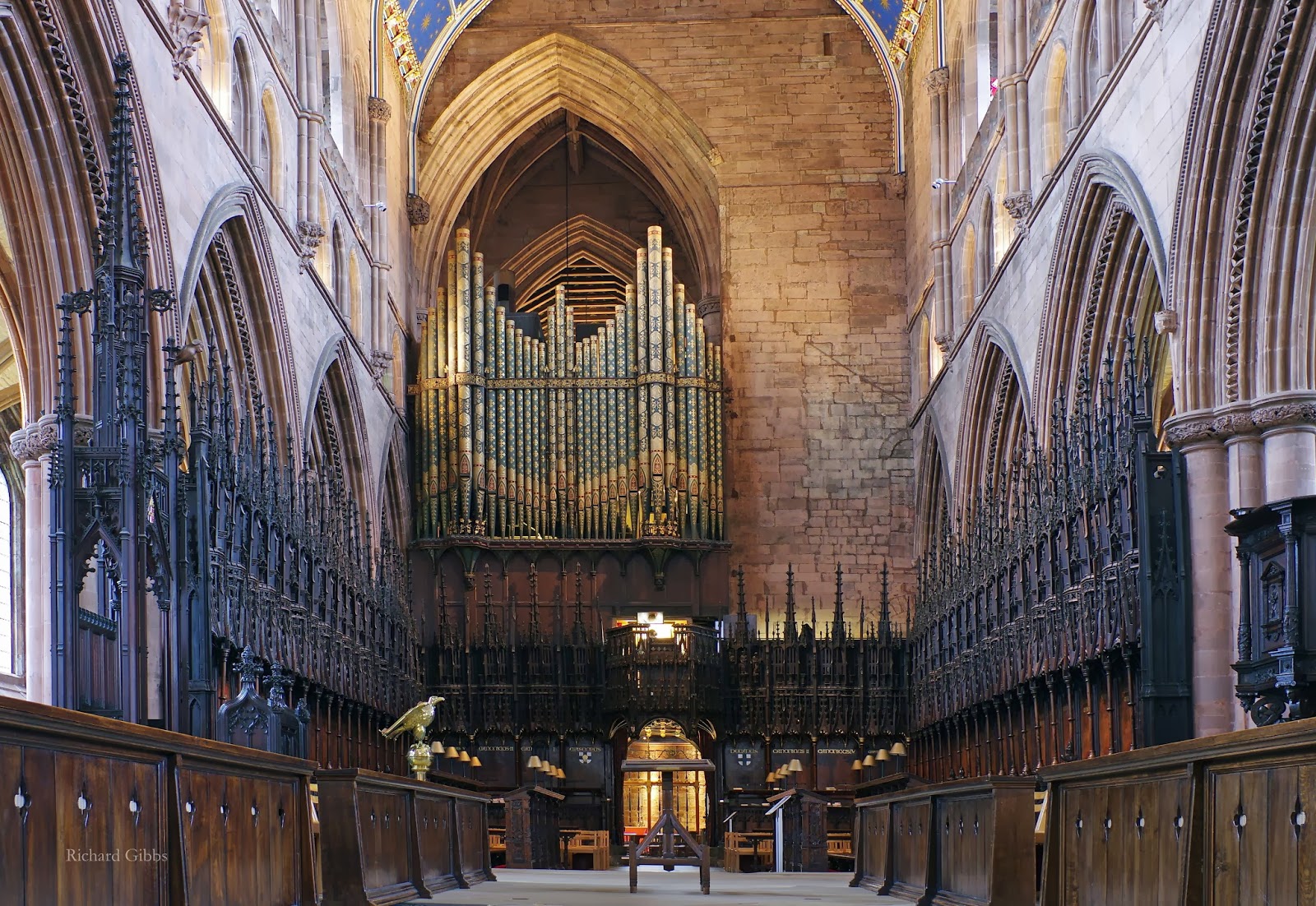 So I stop for a moment and slow to my knees, grateful for the temporary peace within these walls: 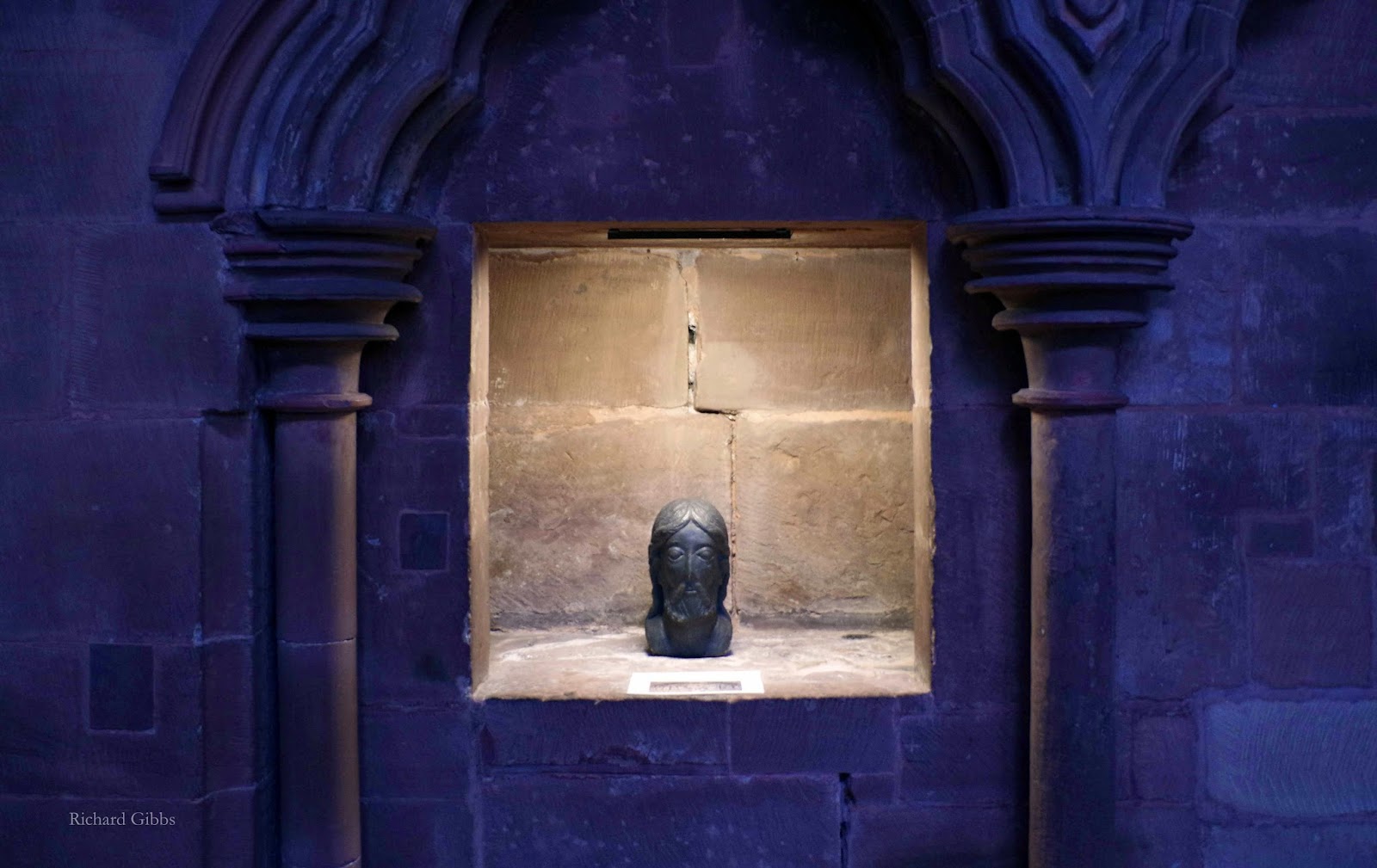 Then, respectfully, I taxi away, to the south, to stay in historic Dalston Hall.  A Pele Tower, constructed to withstand insurgents and equipped to broadcast newsflashes from rooftop braziers.

My driver lives across the border, but is from Birmingham.  If a referendum returns this border country to the Middle Ages, he will be a displaced person, subject to the 90 day tax law, instantly incapacitated from making ends meet legally.  He frets as men in the past will have struck their chests in anguish on hearing the thunder of the Reivers' hooves, or smelled the smoke of desecration.  The insignificance of the ordinary man flickers like some childish sequin in the dusk. 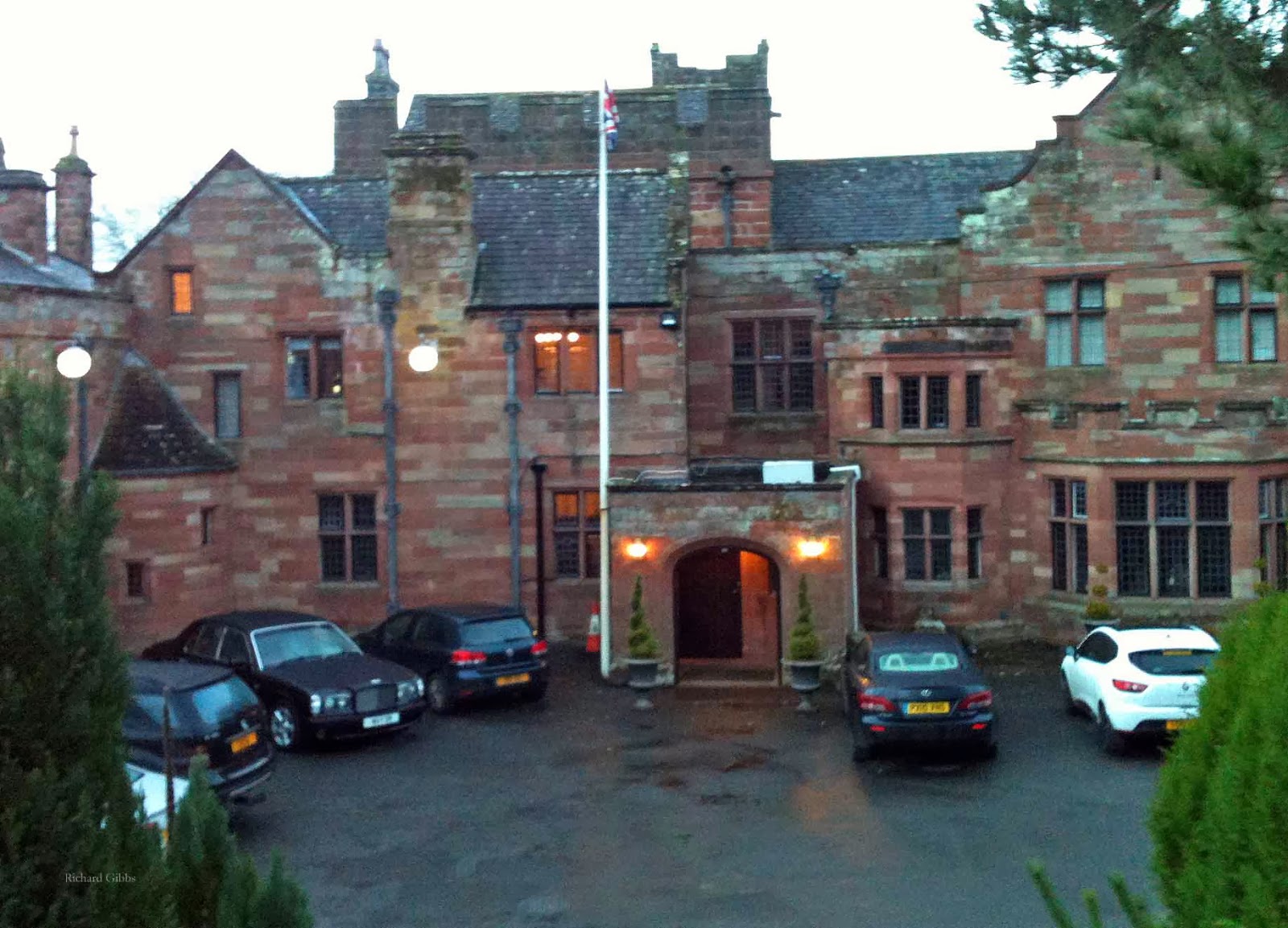 I am ill equipped to judge.  My role as an inspector of borders pales into bureaucracy.  I feel like Cadogan de Vere Carlton-Browne of the Foreign Office, tugging at the forelock of tradition.  I can only think of organising a party of parachutists.

Or rather, as a government employee, I think of duck breast and rioja.

I dine. Alone. A ghostly piano plays itself. The chandeliers drip in my soup while Sir Charles Dalston, Sheriff for Cumberland, looks down on me. Wine spills. Cheese congeals. 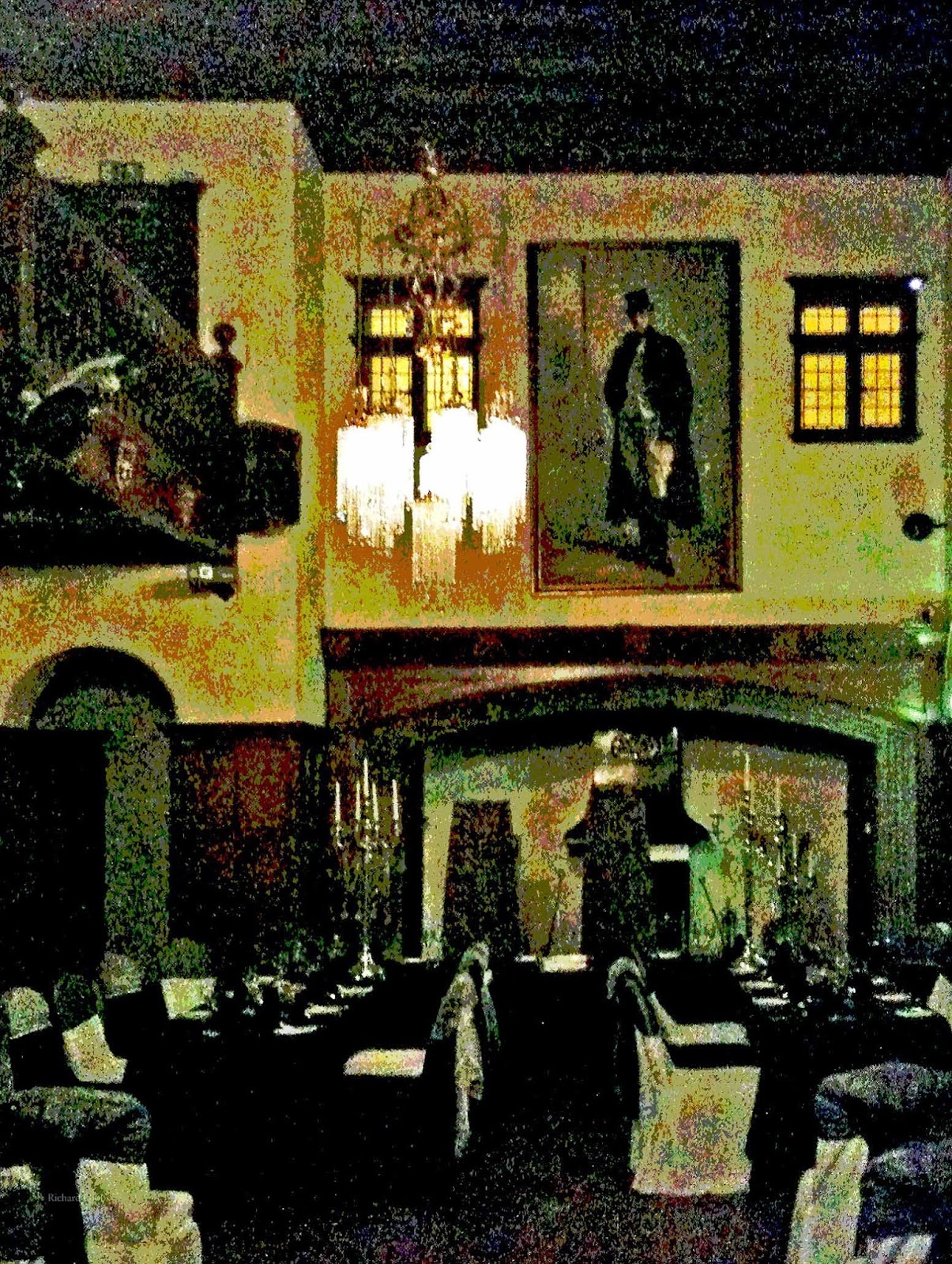 I retire to my room.  The red sandstone walls withstand the wind, but as I try to sleep there is a scratching at my window. Is it Cathy, I wonder, out of joint with both the times and the geography but still trying to reach her Heathcliff?  Or is it the Gryphon, unsettled by the times?  A new bestiary on the loose in these days of salmondella? 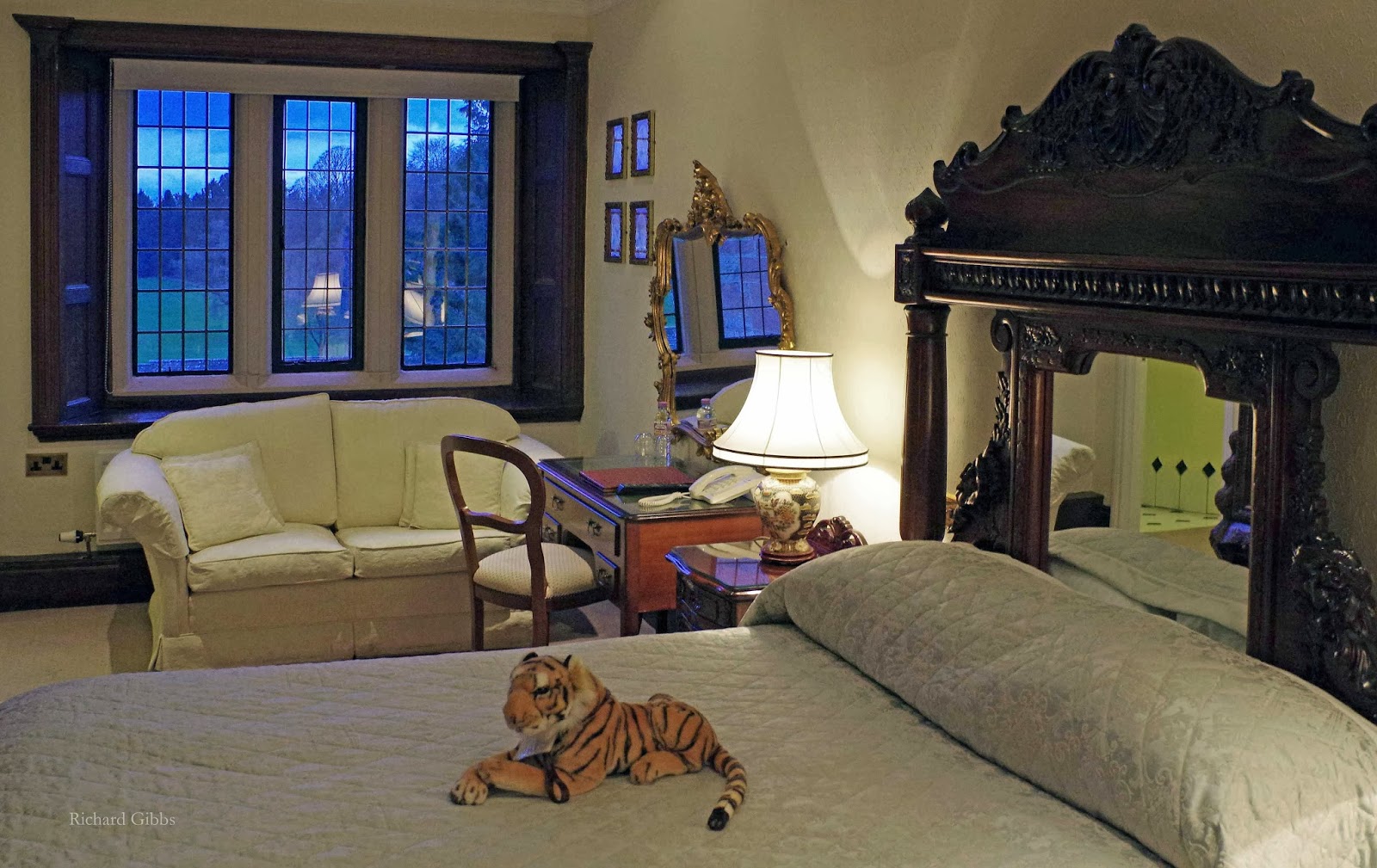 My accommodation is luxurious.  I feel flushed with guilt as I bathe in a south-facing tub. And then, as I begin to flow, rain-splashed, into dreamland, my tiger there to protect me from the Reivers, a song starts to canter across the back of my head.

But someone has changed the words:

Sal-mond, are you listening to me?


I said, Salmond, what do you want to be?


I said, Salmond, you can make real your dreams.
But you got to know this one thing!

No man does it all by himself.
I said, Salmond, put your pride on the shelf,
And just go there, to the Y.M.C.A.
I'm sure they can help you today.

Over the heather the wet wind blows,
I've lice in my tunic and a cold in my nose.

The rain comes pattering out of the sky,
I'm a Wall soldier, I don't know why.