The golden hills of Wales!

When I think of Wales, although this may be reprehensibly prejudiced, I tend to think of wild hills, rocky seashores, rain, and sheep. Gold does not spring to mind.  I would think of coal, if I thought of mining; I would not automatically think of gold. 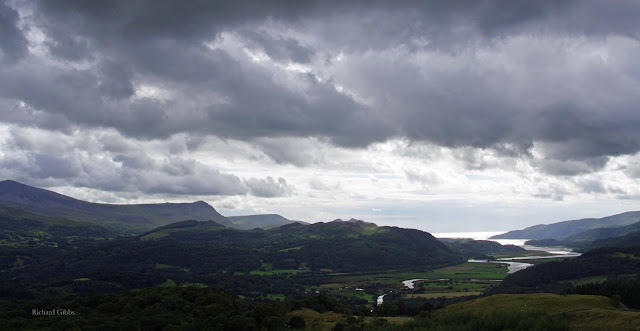 Most usually the light is silver, white or grey - it is not gold, although on bright summer moments, there may be a yellowing, a rolling palette of warmer colours. 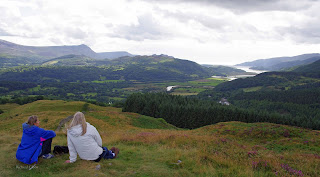 On the left of the pictures above is the lengthy ridge of Cadair Idris, which reaches 893 metres above sea level, near Dolgellau, in the Southern part of the Snowdonia National Park.

On the north and west of Cadair Idris the river Mawddach flows to the Irish sea, winding its way through salt marshes and mud flats, 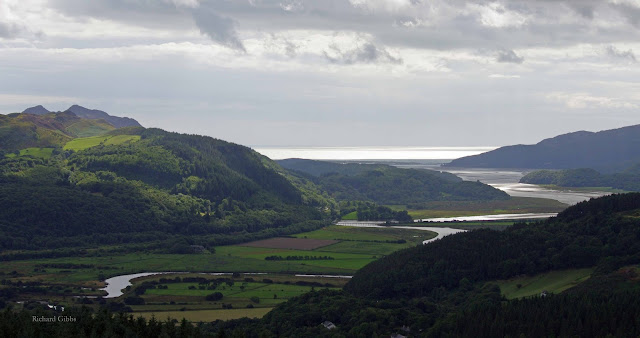 slipping under the long low railway bridge before it spreads out into Barmouth Bay. 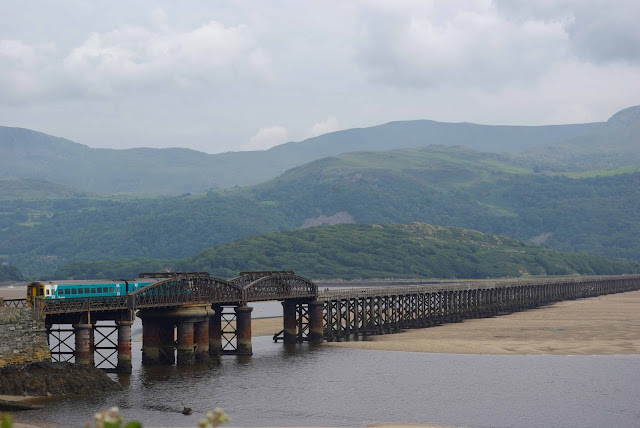 At Penmaenpool, just by the George III Hotel, 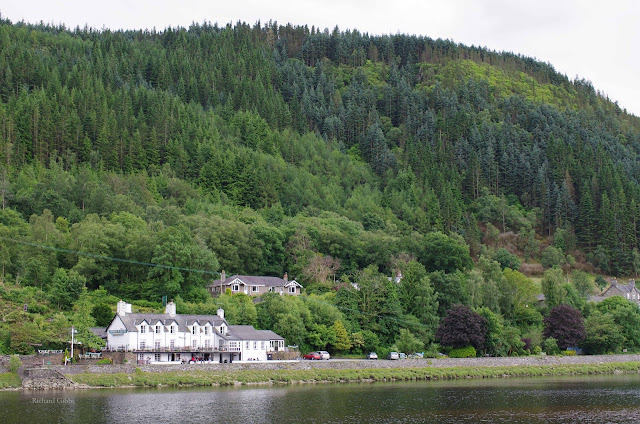 a toll bridge crosses the river, which connects the Mawddach Trail to Barmouth, via Bontddu along the A496.

The estuary is rich in wildlife as well as cattle and sheep.  At Rhuddallt the gardens of the White Horses Retreat slip down to the water's edge. 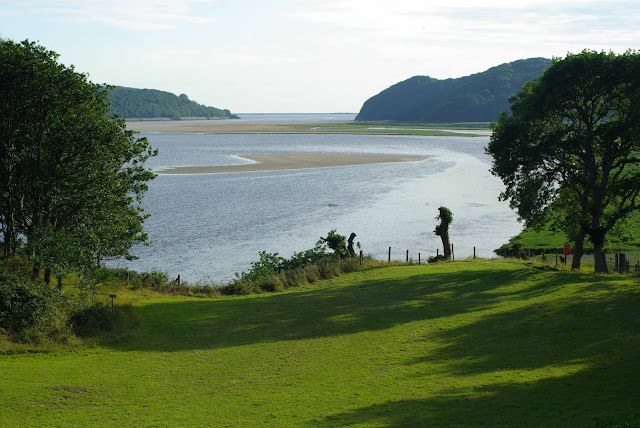 And at low tide the peace of a walk along the sand bar is almost overwhelming. 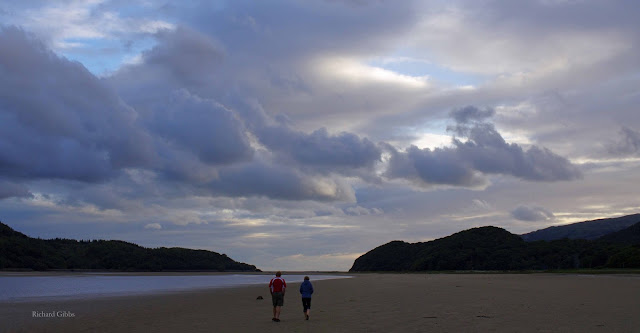 But just a half mile from here is the village of Bontddu, where the river Cwm Llechen tumbles down to the estuary from the slopes of 750 metre high Diffwys.  There was a serious ship-building industry here in the seventeenth century, using oak from the forests, but these hills were also a rich source of minerals, and copper and lead were mined here by the Romans (and there is also evidence of mining activity as far back as the Bronze Age - which would not have been an Age at all if it weren't for mining!)


But then, in 1854, the owner of one of the copper mines, a Mr Goodman, "accidentally" discovered gold. This precipitated a Gold Rush, and the officially recorded output from the six lodes under Clogau between 1862 and 1911 was 165,031 tons of gold ore, from which 78,507 ounces (approximately two and a quarter tons!) of gold was extracted.

The gold extracted here is of rare quality, having a rose blush due to impurities. The slightly dodgy photo above is a snap from the British Airways in-flight brochure taken recently on my iPhone on the way back from Italy.


There is still gold here, but the rush was over in 1911, and for 75 years production was intermittent. Then in 1989 William Roberts, founder of "Clogau Gold of Wales Ltd." recommenced extraction (famously this is where Princess Diana's wedding ring came from, following the tradition of the Queen Mother's ring in 1923, the current Queen's in 1947, Princess Anne's in 1973, and since Charles and Diana - and Charles and Camilla - Kate Middleton wore Clogau Gold in 2011). However with the price of production reaching £1,000 an ounce (health and safety costs!) the Clogau St David's mine closed in 1998.

There are numerous signs of mining in these hills, and Ben Roberts, son of the founder of the company, wishes to reopen the mine.  According to a 2012 geological survey of the area, there could still be as much as £125 million worth of gold in these lodes, though Ben's ambition is to have enough to fuel his jewellery business, and perhaps attract tourists to the area.

When Clogau Gold started trading, the value of gold was about $300 an ounce.  It rose to $1600 an ounce, but this was still an uneconomical price to extract it at the end of the twentieth century.  The peak in recent years was in about 2011 when it reached $1800; currently it is about $1320, but the hope is that with advanced technology it will not be as expensive to produce as it was.
Anyway, the Crown Estates, a company with a portfolio worth about £6 billion, has the exclusive right to license gold mining in the United Kingdom, and despite pressure from foreign investors it is probable that Ben Roberts and Clogau Gold may once again disturb the earth beneath the hills around Bontddu. 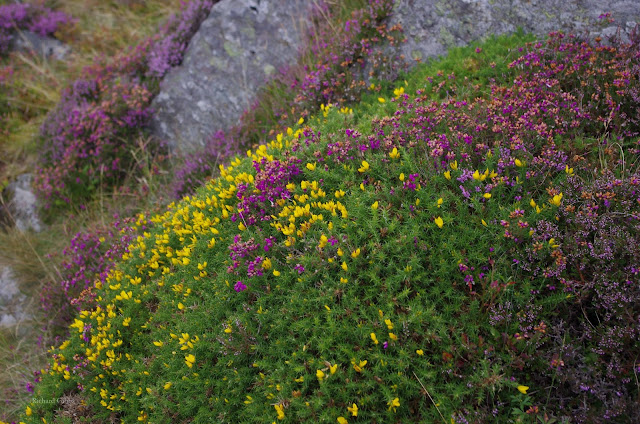 For me the better gold is the colour of the gorse and the vetches above the ground.  It may be misty, and the clouds may roll in with cold winds, but it is great walking country.  Handy dry stone walls provide shelter for a snack and a cup of tea, 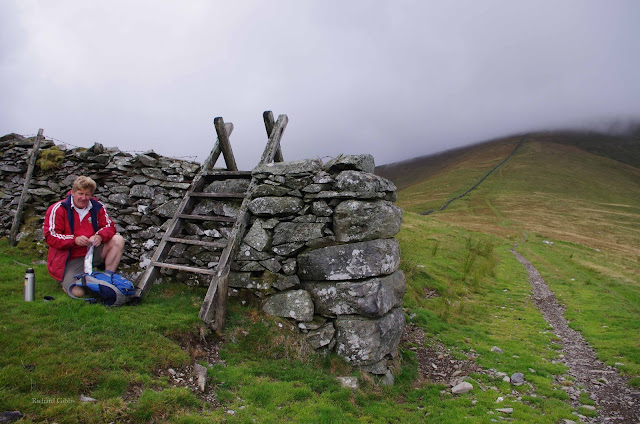 Though at times visibility is disappointing, 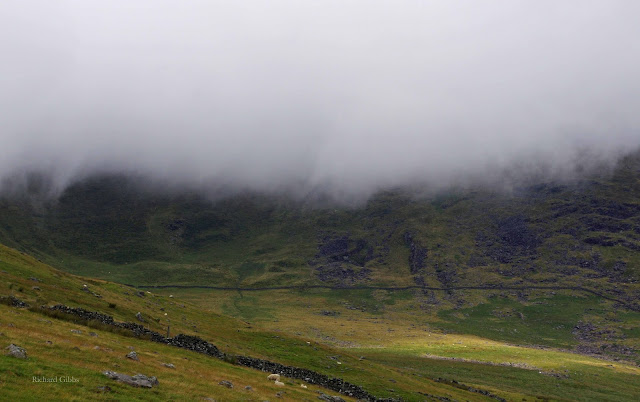 It will clear from time to time, 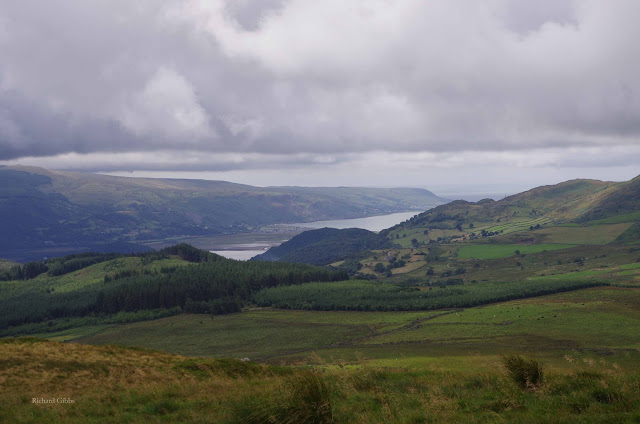 And the landscape reveals its glories, and its history. 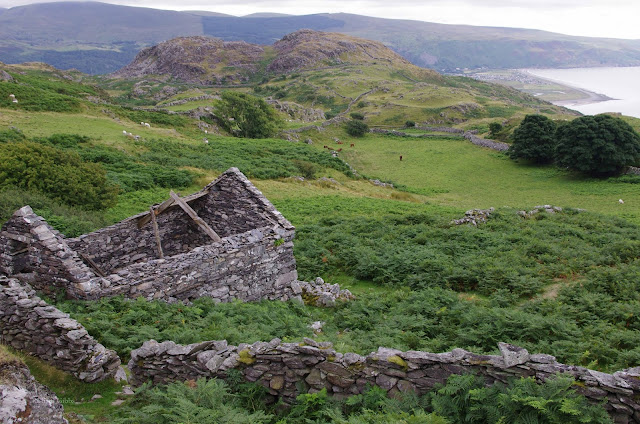 Then the day draws to a close; quiet descends on Afon Mawddach, 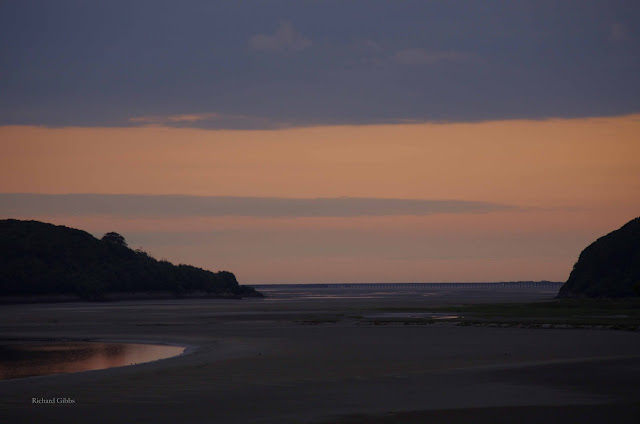 And the golden lights of the George III sparkle us home across the river. 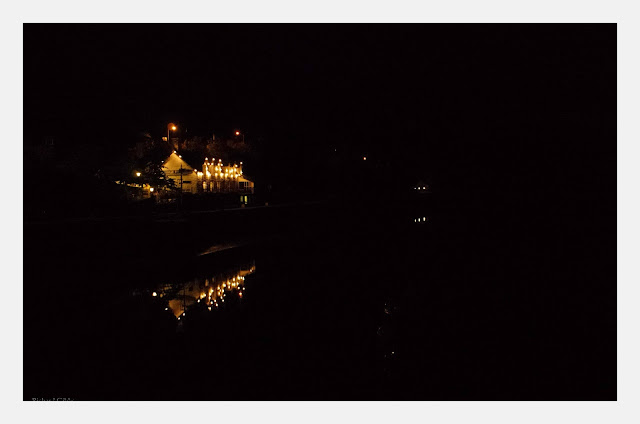 It's interesting to think of gold rushes in the British Isles (there was one in Scotland too) but, as the Pardoner taught me, "Radix malorum est cupiditas," and I cannot unscramble the images of the young men dying in the woods in Pasolini's film (of 'The Canterbury Tales') from association with Enron, Freddie Mac, Lehman, Waste Management, Parmalat, and so on.  The unseemly, futile, greedy scrambles for wealth have done little to enhance our world.

Better a golden sunset than a ring of fire.