A Stroll on the Heath

Not long ago my mother was in the , Hampstead, and from her room on the 8th Floor I watched flurries of snow settling on the higher ground of the Heath.  It looked wild and foreign – the dense snow clouds looking like icebergs drifting in on a cold current from the north and east.  I gazed at the weather and saw the whiteness fall, thinking of the natural fauna chilled and hungry.  It didn’t really occur to me that this was a park, a play-place for weary Londoners; it was a view of another time, another world.

When John Keats lived next door to the Brawne family, in the penultimate year of his short life, he was a long way from .  His sojourn here until his fateful departure for Rome in September 1820, following the death from tuberculosis of his younger brother Tom in December of 1818, was productive and properly romantic, given his output of glorious verse and his affection for his neighbour’s daughter. John and his two brothers had previously lodged in Well Walk, Hampstead, having fled from the unhealthy damp of .  This address, like Flask Walk, is a reminder of the fact that Hampstead was once known for its beneficial waters, and also, at 300 feet above sea level and approximately 5 miles from the City (as the crow would fly) this was a salubrious and pleasant place. 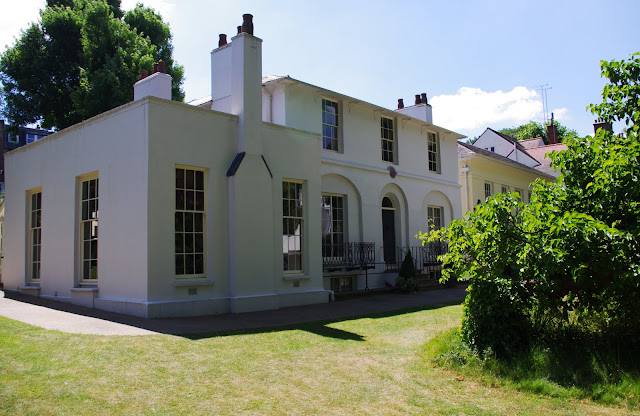 After Tom’s death, John was invited to lodge with his friend Charles Brown in a relatively new, semi-detached house called Wentworth Place.  Keats had already met the 18-year-old (he was 23) Fanny Brawne and in 1819 she moved into the other half of the house with her family.    It was supposedly here in the garden, under a plum tree, that he wrote his “Ode to a Nightingale,”

Where youth grows pale, and spectre-thin, and dies;
Where but to think is to be full of sorrow
And leaden-eyed despairs,
Where Beauty cannot keep her lustrous eyes,
Or new Love pine at them beyond to-morrow.

How much of his thoughts were actually about a nightingale, and how much with Fanny, or his brother, or his own declining health?

The house is decorated in period style and contains furniture and memorabilia from the time of its poetic occupation, though it was added to and changed in later years when owned by the retired actress Eliza Jane Chester, who had supposedly been associated with the Prince Regent.  The address is now “Keats Grove” and it is only a few minutes walk from Hampstead Station on the Northern Line or from Hampstead Heath mainline station. 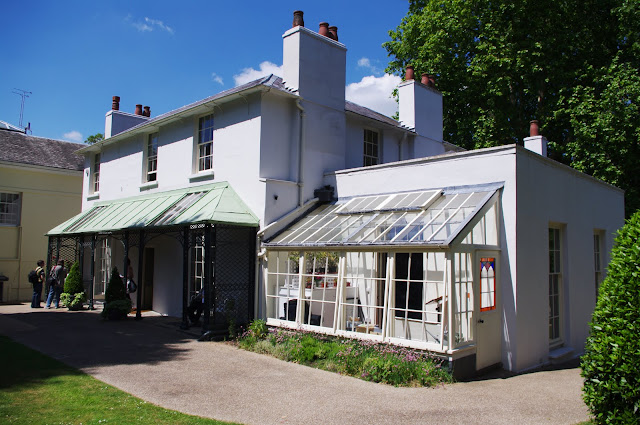 At A House In Hampstead Sometime The Dwelling Of John Keats

O poet, come you haunting here
Where streets have stolen up all around,
And never a nightingale pours one
Full-throated sound?

And he imagines that perhaps his spirit returns from to inhabit the place – just, perhaps, as Andrew Motion did more recently when he spent months there working on his biography of Keats.  It’s a soulful place, and one of the sites in Greater London most evocative perhaps of a certain time, almost two hundred years ago, when city was surrounded by fields and villages, rather than suburbia and concrete.

Of course Keats was not the only celebrity to have walked on the Heath.  In fact one reason he moved there was that Leigh Hunt, the critic and one-time associate of Lord Byron, lived nearby, and at his house Keats met several other poets, including Percy Bysshe Shelley, another young man destined to meet death in . 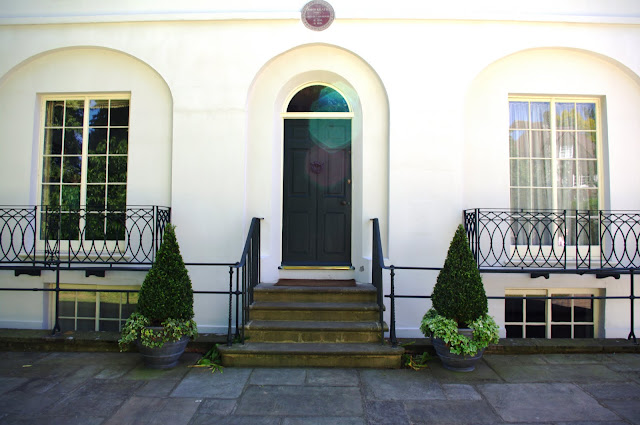 Keats also bumped into Coleridge, of the older Romantic generation, whilst walking on the Heath, as Coleridge then lived, and was later buried, in Highgate.  Coleridge was walking with one J. H. Green, who had taught Keats at Guy’s Hospital, when, as Coleridge recorded, “A loose, slack, not well-dressed youth met Mr Green and myself….”   According to Keats they strolled in conversation for almost two miles, touching on, amongst other things, nightingales, which apparently Coleridge found disturbing!

To the north of the Heath, a couple of miles wander from Keats’s house via the Vale of Health (where D H and Frieda Lawrence resided in 1915, with Katherine Mansfield and John Middleton Murray as neighbours) is Kenwood House, home of a collection of fine art (including a Rembrandt self-portrait – “Portrait of an Artist” – and Vermeer’s “The Guitar Player”) which was bequeathed to the nation in 1927 by Edward Cecil Guinness, 1st Earl of Iveagh – hence the title, “The Iveagh Bequest.”  The house dates from about 1700 but acquired its current splendour when bought by the 1st Earl of Mansfield and restyled by Robert Adam between 1764 and 1779.  {If you are taken with this location, by the way, as Hugh Grant and Julia Roberts were in the film “Notting Hill,” you could hire the East Wing (Music Room, Green Room and Orangery) or the Adam Library and Dining Room, from 6.30pm to 11.00pm for just £3,500 (plus VAT.)} 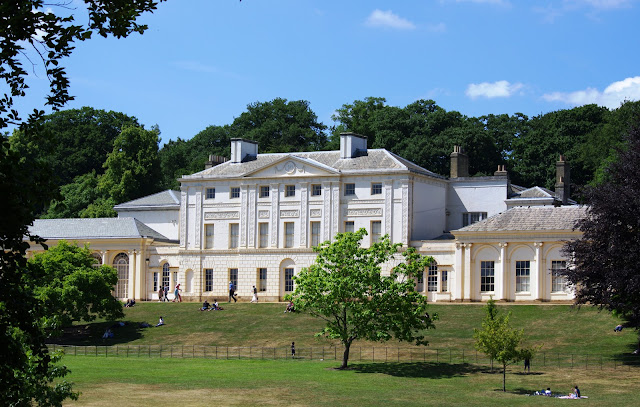 It’s not far from Kenwood House to Highgate, which borders on the north east of the Heath.  Like Hampstead this was once a separate village, as mentioned, home to Samuel Taylor Coleridge in his later years, until his death 1834, though he had previously lodged here in 1816 in a vain attempt to throw off his opium addiction.  Coleridge’s home, at Number 3, The Grove, was also the home of J B Priestly from 1933 to 1939.  Another poet who lived here was John Betjeman, who passed his childhood years at Number 31, Highgate Hill West.  Of course you would not have found Sir John in any of the pubs around here, as he was famous for “liking wine and loathing beer,” but there are some fine hostelries for thirsty walkers, from The Wrestlers (98 North Road, Highgate) to The Flask (77 Highgate Hill West) on this side of the Heath to The Holly Bush (22 Holly Mount, Hampstead) and The Flask Tavern (14 Flask Walk, Hampstead;) and for those who like a Dickensian atmosphere, there is also the Spaniards Inn (Spaniards Road, NW3) which got a mention in “The Pickwick Papers.” 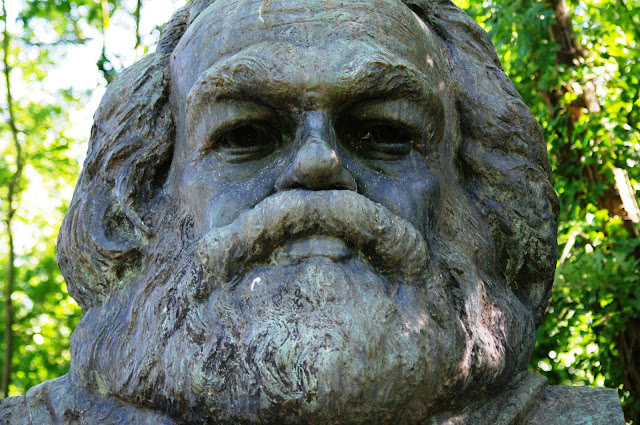 For a different type of nostalgia, however, visitors to Highgate should not miss a sortie into .  This is divided into two burial grounds – the 17 acre , which was opened in 1839 when was desperate for space to inter its departed, and the 20 acre , which opened its gates in 1860, at which time some 30 burials a day were being performed here.  The two areas were connected by a tunnel with a hydraulic system for moving coffins from the Chapel without leaving consecrated ground.  As fashions for ornate memorials changed, and with the decline in the work force during the First World War, these cemeteries began to fall into disrepair and became overgrown.  It wasn’t until the founding of The Friends of Highgate Cemetery in 1975 that a gradual programme of restoration began.  Nowadays you can visit the as part of a guided tour, but the public are allowed into the every day on payment of a small charge.  It is here that you will come face to face with Karl Marx, and some of his followers.  And it is here that you can wander amongst the overgrown and the forgotten, in an extraordinary garden of remembrances. 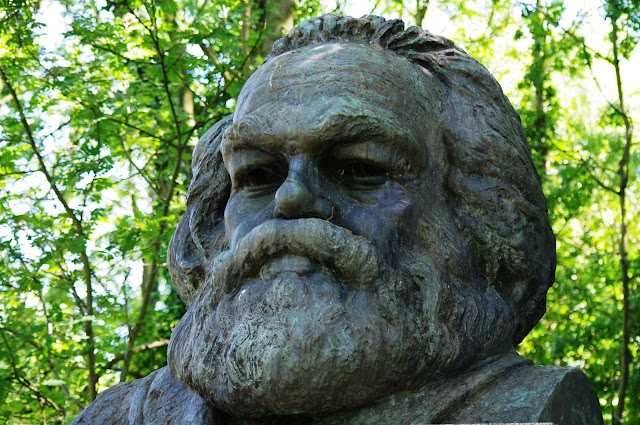 On the Highgate side of the Heath there are the Highgate ponds, a series of fresh water pools where ladies and gentlemen may plunge into the stimulating waters of the one of the two sources of the river Fleet, dammed into ponds in the 17th and 18th centuries.  A mile or so to the west another tributary has also been dug into the Hampstead ponds, one of which is a mixed bathing lido.  On August 18th 2011 the temperature in all three of these was an exhilarating 19º Celsius….. 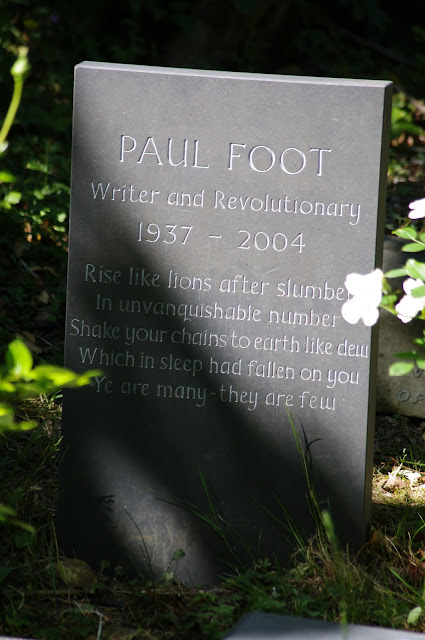 Between these two valleys, and the highest point in the 800-odd acres of Hampstead Heath, is Parliament Hill, which perhaps took its name from its use as a defensive position for parliamentary troops in the Civil War, though it was once known as Traitor’s Hill, and presumably was a place of execution.  Until comparatively recently cattle were grazed here, and in the time of Keats or even Dickens there would have been plenty of livestock at large. Today the grass is still unmown in summer, but the network of paths and myriads of strollers, joggers and sunbathers keep it relatively under control.  It is a wonderful vantage point, at 322 feet above sea level and with an uncluttered view (which is protected by law) across the Thames valley it can be spectacular on a clear day and it is the perfect spot to wind down and contemplate the relationship between man and environment, in a way that perhaps Wordsworth had in mind when seeing the city from Westminster Bridge. 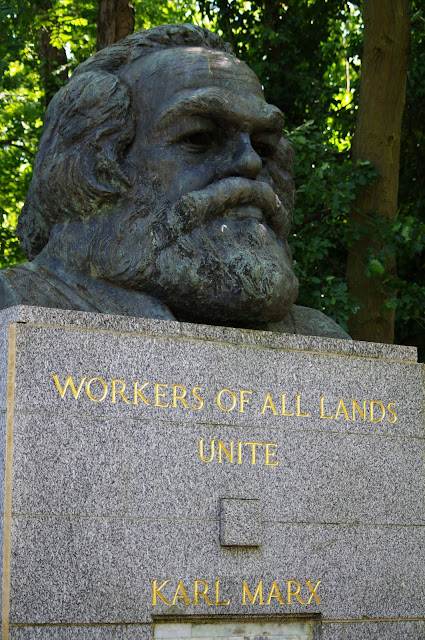 In this elevated position it is appropriate to consider the role of parliament and the necessity of law in our ordered society.  The current by-laws for Hampstead Heath reflect this in their attention to detail.  Produced in 1932 and still extant, we are constrained to be sensible, even if desperate for a swim at Christmas:  “7 No person shall in any open space wilfully break or damage any ice on any pond or lake, or, when prohibited by notice, go or attempt to go upon any such ice.”  Or, if intent on getting the better of your neighbour, remember that: “24 No person shall in any open space race or train any whippet or other dog.”  To prevent an explosion of certain commercial practices: “29 No person shall in any open space sort rags, bones, refuse or matter of like nature or mend any chair.”  And, finally, in case you were thinking of taking a walk instead of having a shower, remember that: “35 No person in a verminous or offensively condition shall lie about in any open space or lie upon or occupy any seat therein.” 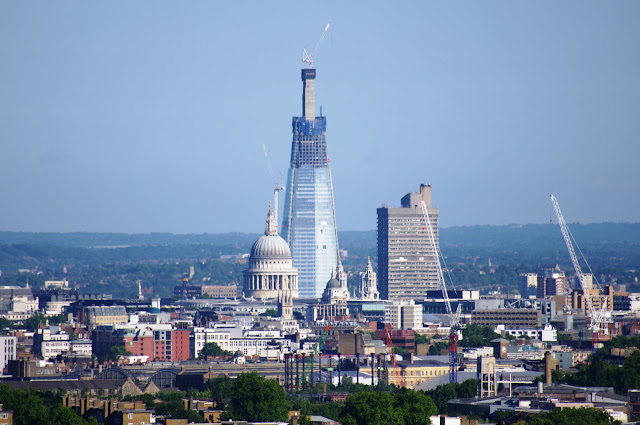 The view from here reminds me of where I came in.  Overlooking is a reminder of the industry, expansion and achievement of humanity.  Overlooking Hampstead Heath from the eighth floor of a Hospital in winter is also a reminder of that, but in addition it recalls our relationship with nature and our precarious position in the world.  The blustering snowfall I watched illustrated the capricious power of nature.  The delicacy of one snowflake binds with the delicacy of a million others to coat the landscape with a freezing blanket of white.  And, gazing from the hospital room, my mother in bed behind me, I shivered. 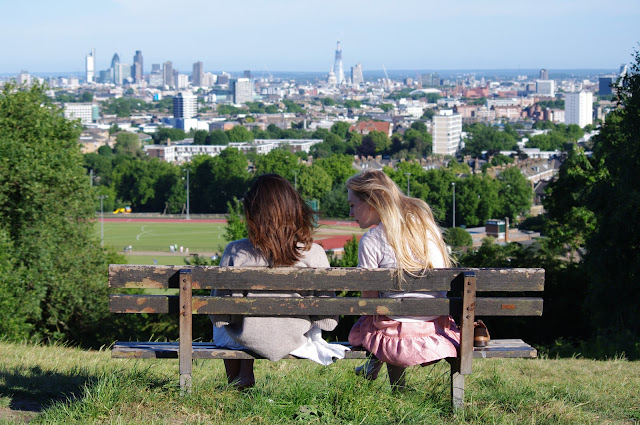 For a related article on Hampstead, please also see: